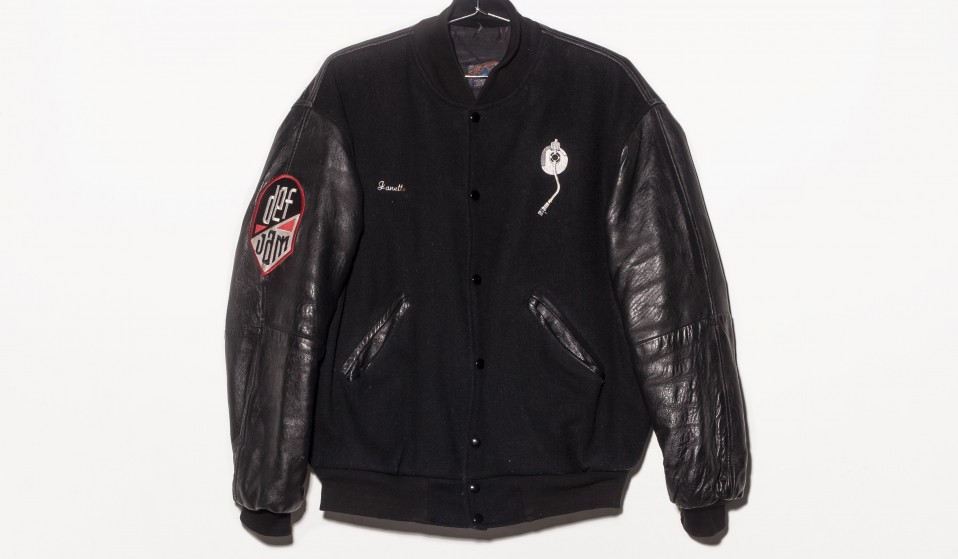 Text By Janette Beckman, as told to Emily Spivack

A new book reveals the mysteries that lie behind the clothes of creatives; from Eileen Myles to Genesis Breyer P-Orridge. In an exclusive extract, Janette Beckman shares the story behind her favourite Def Jam bomber.

A new book reveals the mysteries that lie behind the clothes of creatives; from Eileen Myles to Genesis Breyer P-Orridge. In an exclusive extract, Janette Beckman shares the story behind her favourite Def Jam bomber.

I was working as a photographer for the music magazine Melody Maker when, in 1982, I heard about this thing called “hip-hop.” The first ever hip-hop tour was coming to London, and I put my hand up to photograph a story about these musicians. I went to the hotel where they were staying, just me and my camera, and I photographed the double-dutch dancers, b-boys, and graffiti artists. I was blown away by the styling, attitude, and poses. People in London didn’t look like that. Later that night, I went to the concert with GrandMixer D.ST, Fab 5 Freddy, Futura, and Afrika Bambaataa. DJs, break-dancers, rappers, and artists all onstage together, crazy and colourful, especially coming after punk, which, by that time, had gotten a little dreary.

That same year, after the story ran in Melody Maker, I went to visit a friend in New York over Christmas. The hip-hop stuff I’d just seen in London was happening all around the city, kids with boom boxes on their shoulders or break-dancing outside subway entrances. In New York, it’s cold, but the sun’s shining and people are selling hoop earrings and knock-off Gucci bags on the street. It was so exotic coming from London, where it rains all the time. After that, I never left.

I hadn’t been in New York too long when another British magazine I’d been working for, The Face, called. “There’s this group, Run-D.M.C… you’ve never heard of them, but let’s find out about them.” So they gave me a phone number. It turned out to be Jam Master Jay’s mom. Jay told me to meet him by the Hollis train station. I went up there with my Hasselblad camera and photographed Run-D.M.C. hanging out with their friends on their street.

I started getting jobs with Def Jam. They had this really scruffy office not too far from my apartment. I remember walking in to show them my photos. Lyor Cohen was sitting at his desk with a cigar in his mouth and his feet up on the desk, shouting into the phone, something like, “$100,000! Run-D.M.C.!” I asked him to look at my portfolio. He told me, “Ah, yeah yeah yeah, OK. Do press pictures for LL Cool J.”

Because I was British and a woman, everybody was super nice to me. They were curious about what I was doing in New York and why I was interested in them. When I’d photograph Salt-N-Pepa or Leaders of the New School, they’d ask me questions, I’d ask them questions, and we’d collaborate. In retrospect, it was a huge deal to be allowed into that world, to, say, photograph Afrika Bambaataa in the Bronx. I think it really helped to be a white woman from another country. If I’d been a white American guy, I wouldn’t have been able to get the pictures I got. I was like a stranger in a strange land.

At the time, I was living on Franklin Street in Tribeca, and there was nothing down there. At night, it was dark. Like the song “The Message,” it really was “junkies in the alley with a baseball bat.” It was dangerous, but I didn’t think about the danger. I’d been living in a virtual squat in London that didn’t have heating, so when I moved to New York, and the place had steam heat, I was really happy.

One day, probably in 1988 after I’d been working with Def Jam for a little while, I came into the office and either Lyor Cohen or Bill Adler, Def Jam’s publicist, had something for me. They’d decided I was worthy of having this Def Jam jacket [pictured above]. They’d even gotten my name embroidered onto it. To be given a Def Jam jacket was the ultimate in cool. Wearing it made me feel like I was part of the posse. It was a badge of honour – better than being knighted by the queen – and I wore it on all my photo shoots.

To this day, the jacket remains my garment of choice the moment it gets chilly. When I wear it, people come up to me on the subway and ask about it. They know it’s old and they look at me like I’m an OG. One time a limo halted next to me on the sidewalk. Someone yelled out the window, “Yo, Def Jam, where’d you get that jacket? Can I buy it?” But whenever that happens, I tell them it has my name embroidered on it and I won’t sell it. Because the jacket is about coming to New York to live that New York life. 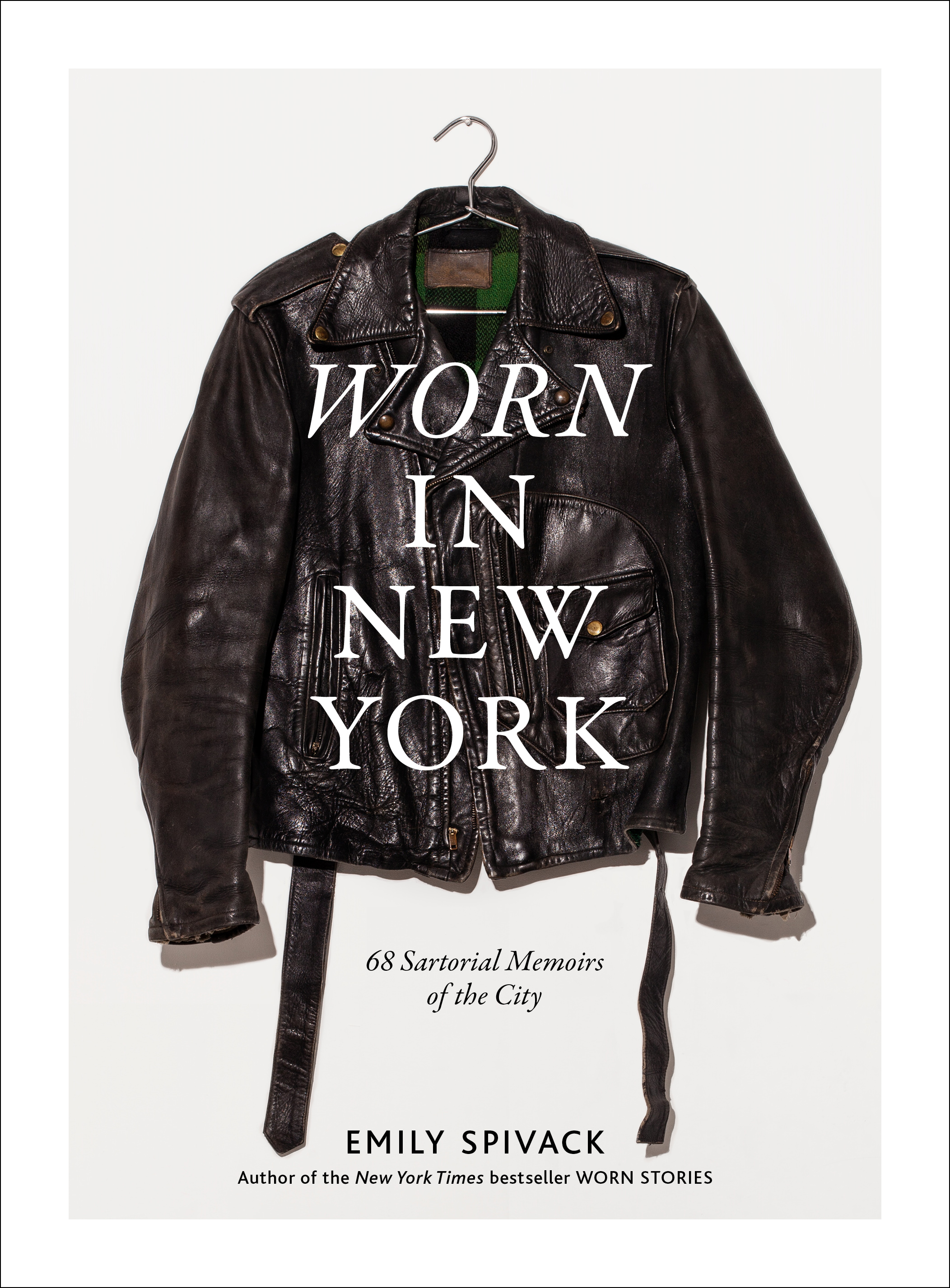 Extracted from Worn in New York: 68 Sartorial Memoirs of the City by Emily Spivack, available now from Abrams Image.

Linkedin
RELATED ARTICLES
OTHER ARTICLES
Activists and campaigners are fighting back against new laws that would seriously undermine the ability to take industrial action, calling it an attack on fundamental workers' rights.
As she gears up for the release of her first book, the 24-year-old climate activist talks standing up to authority and building a more inclusive movement.
Social prescribing connects people with non-medical support to improve their health and wellbeing – but some experts worry it’s just a stick plaster solution.
After building his reputation covering the US civil rights movement in the 1960s, the photographer went on to produce some of the most enduring images of the past century.
Photographer Sean Maung reflects on documenting a small town in Pennsylvania afflicted by high levels of unemployment, poverty, violence, crime, and addiction.
Author Edward Banches dicusses his new book, which examines the hard rock and metal scenes in five African countries: Botswana, Togo, South Africa, Kenya and Ghana.