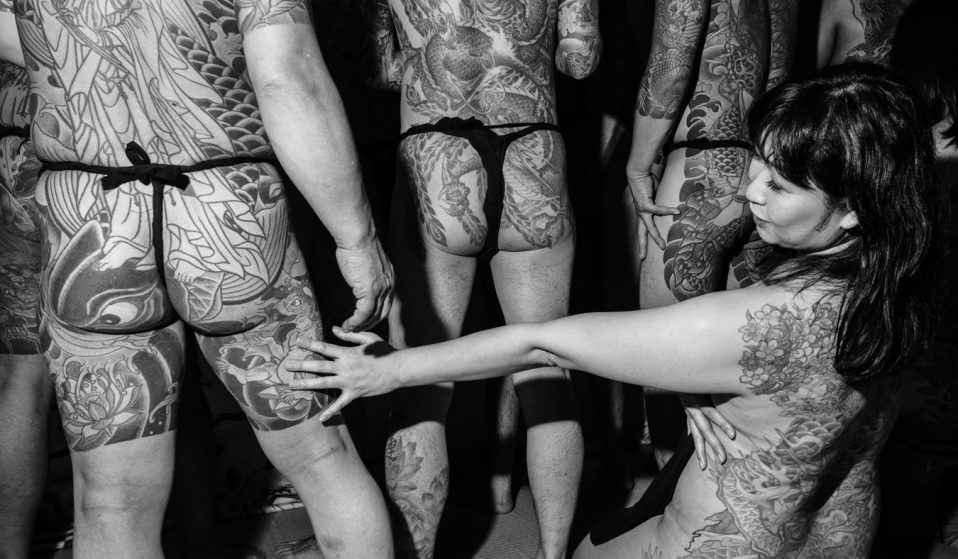 Horiren 1st is among the world’s most sought-after tattoo artists. But in a country where body art is considered taboo, her journey to the top hasn’t been easy.

Horiren 1st is one of the world’s most sought-after tattoo artists, celebrated for keeping the ancient Japanese method of Tebori alive. But in a country where body art is considered taboo, her journey to the top hasn’t been easy.

The working-class city of Warabi is just a short train trip from Tokyo, though it feels like a world away. As the neon-lit streets of the latter make way for low-slung houses and densely packed apartment buildings, the metropolitan abundance of Japan’s capital seems a distant memory.

Down one of its numerous narrow streets – past a bakery, a series of bars and restaurants as well as an ancient strip club – lies a relatively nondescript house, only distinguished from its neighbours by a Maori-inspired mural on one wall and a banner hung over a second-floor balcony. Inside lives one of the most sought-after tattoo artists in the world: Horiren 1st, a modern master in the ancient method of  Tebori. 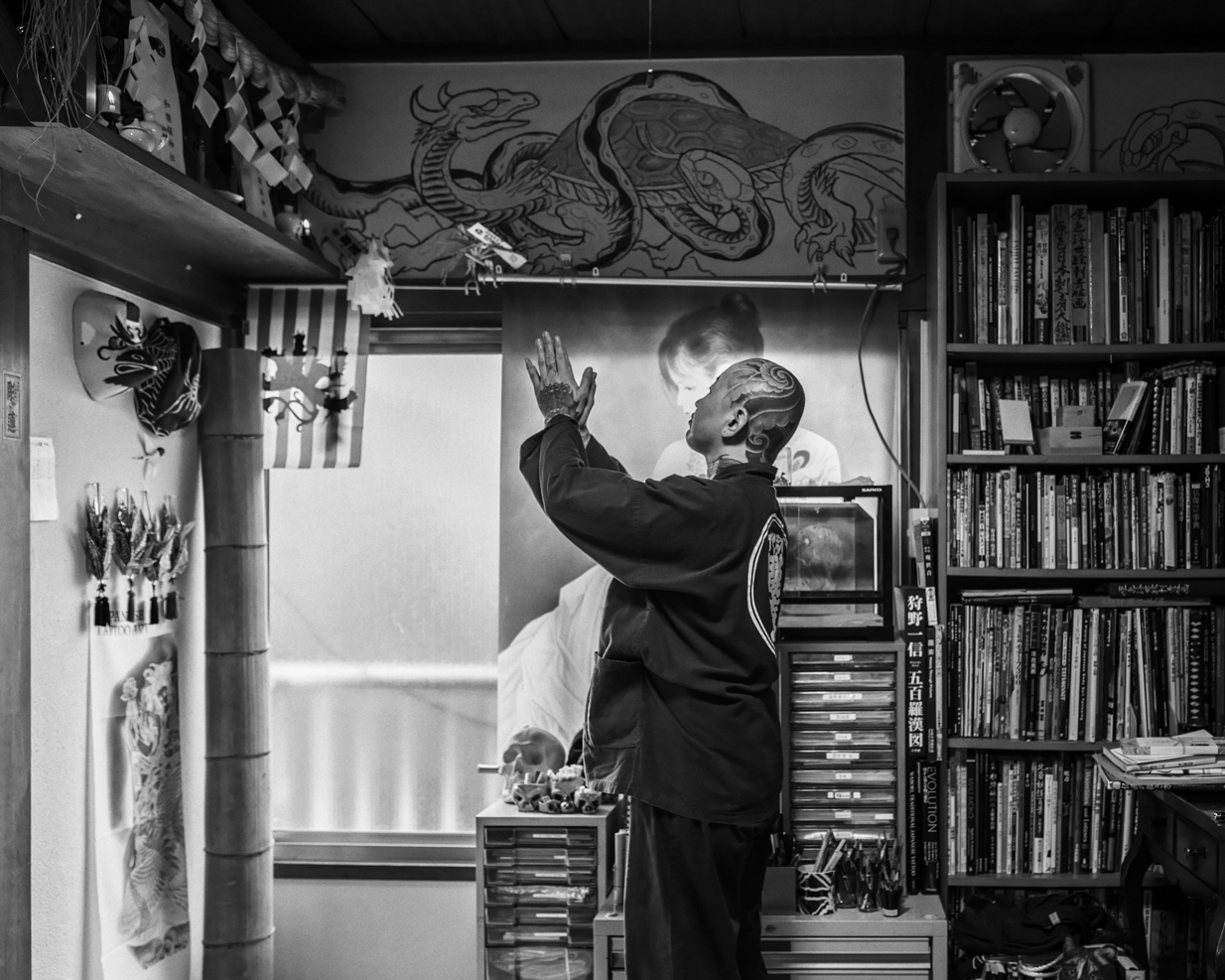 Horiren’s studio is compact and well-kept. The walls are covered with art; the shelves crammed with books. An albino snake silently patrols a glass aquarium while her cat, Necoste, pads around the room. Horiren, a small woman who smiles easily, exudes the type of calm but intense energy one might expect from a monk. Sitting patiently, with tattoos visible from the edges of her jacket, shirt and trousers,  the 51-year-old asks with a grin: “Where should I start?”

Horiren grew up in Kisarazu, a city located in Chiba Prefecture. Her family ran multiple businesses – from farming nori to repairing motorbikes – and Horiren was expected to do her share. “My parents were very strict, almost militaristic,” she remembers.

“At 6am, I had to be at the breakfast table and ready to go, or I wasn’t allowed to eat that morning.” She flourished at art from an early age, but her parents defied advice to enrol their daughter in a larger school where that talent could be nurtured. “My dad didn’t believe that a painter or an artist was really a career where I could make money.” 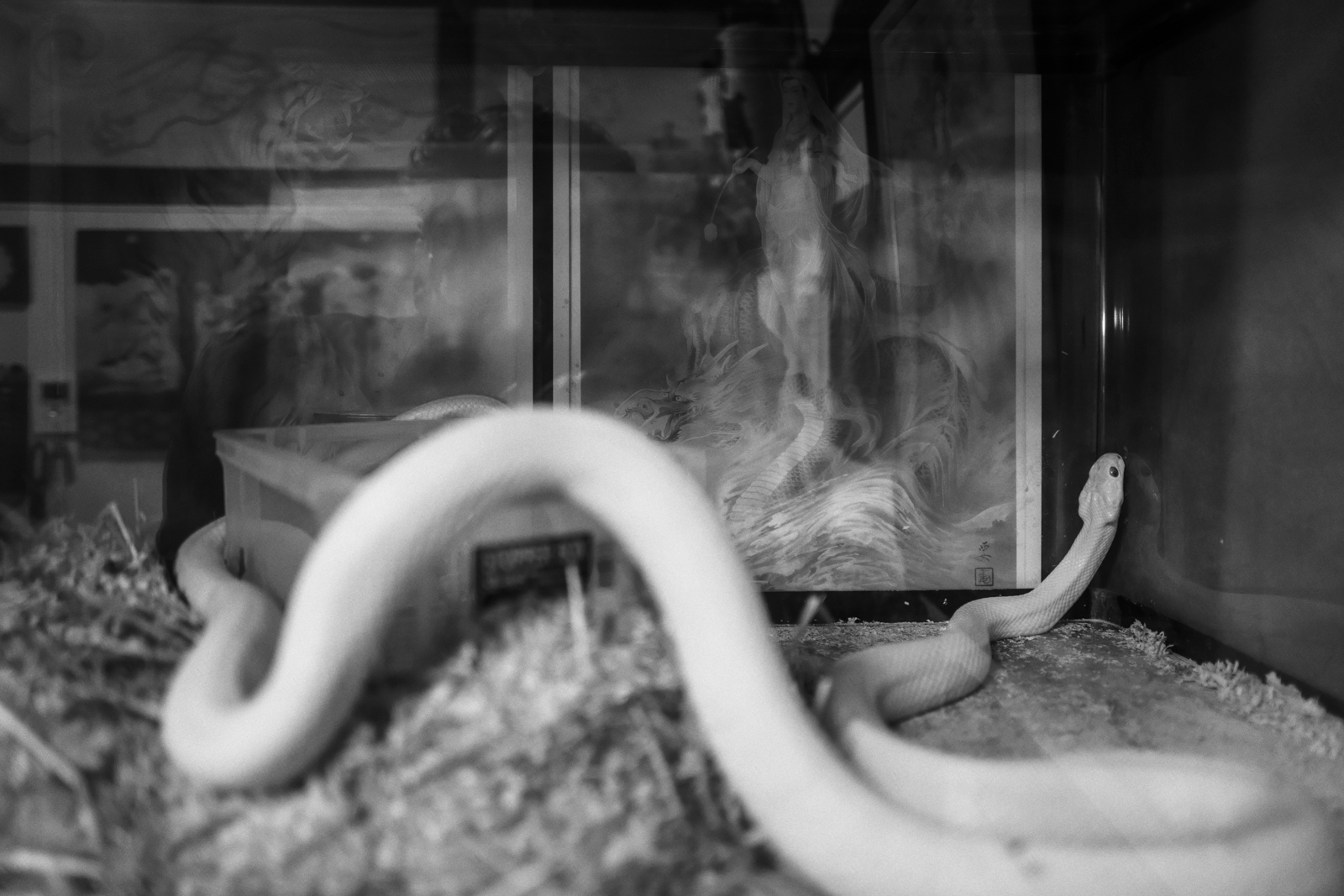 Driven by a desire to escape small-town life, Horiren saved enough money to attend design school in Tokyo without the support of her parents. She branched into computer game design and mural art, working at a bar while couchsurfing to help make ends meet. But nothing felt like the right fit until a holiday to Australia changed her life.

While visiting a friend there, she injured her hip in a horse riding accident and had to travel to Sydney for treatment. It was during her recovery there that she stumbled upon a flash-tattoo shop: the kind where customers can pick a template off the wall. “I didn’t have much money, but it really grabbed me. The idea that this would stay on me forever sucked me in.”

Horiren only planned to stay two weeks but ended up on a three-month tour of Australia, hitchhiking and riding a motorbike, getting a new tattoo design at nearly every stop. Before heading back to Japan, a guy in a Sydney pub began chatting her up about tattoos, showing her a design they had in common. 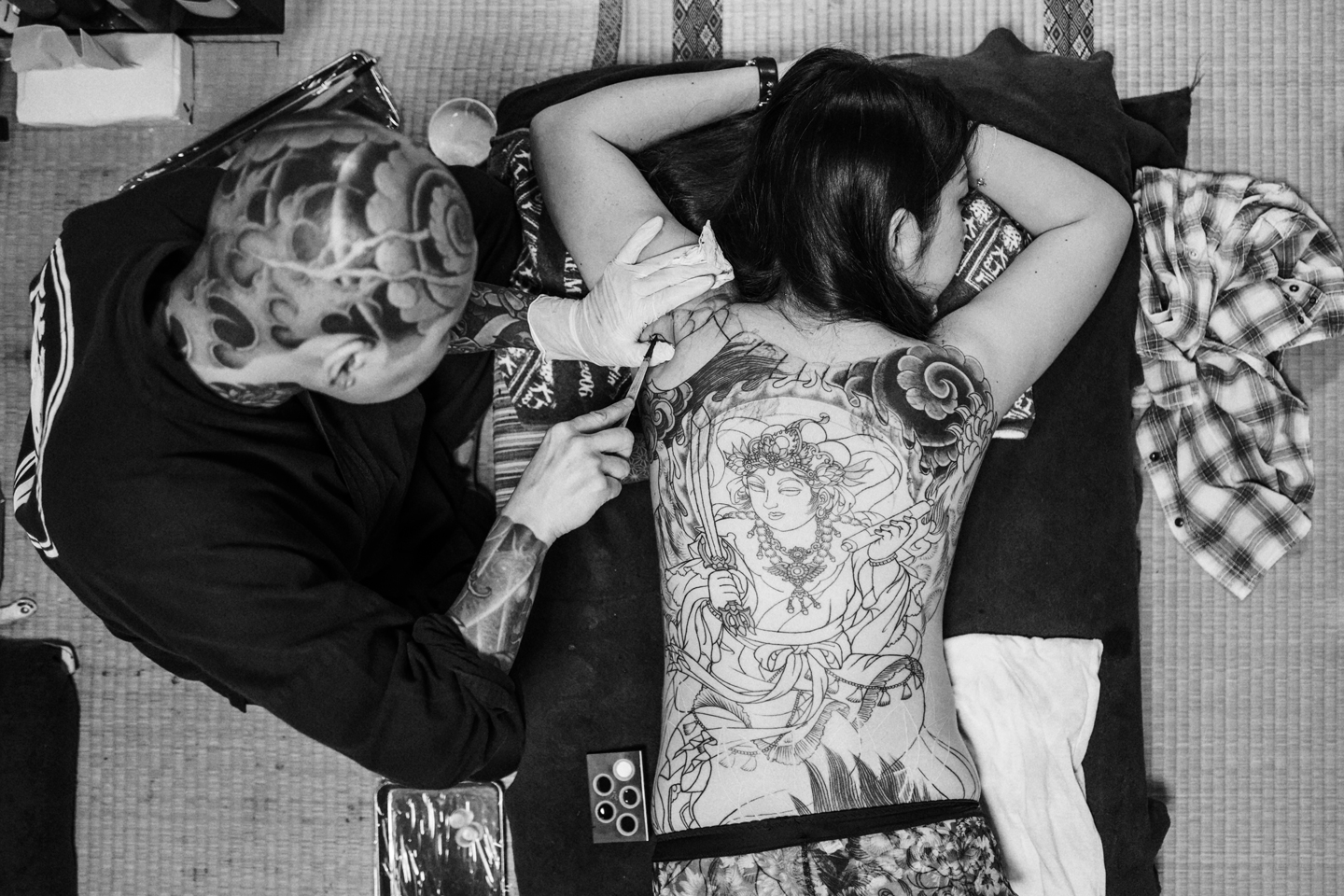 “I thought, ‘Holy fuck, I have the same tattoo as this guy? That’s awful. Why didn’t I get an original?’ On my flight home, 10,000 metres above ground, I made a commitment to myself that I would become a tattoo artist and only do original work.”

Even today, tattooing is taboo in Japan. Wearers are generally prohibited from visiting public spaces where skin is exposed – beaches, baths, gyms – due to a stigma stemming from its association with Yakuza gang members, who often pledge loyalty to their organisation with full-body markings. (While Horiren has tattooed Yakuza, they are far from her only clientele.)

The act of tattooing itself sits in a legal grey zone: there is no formal recognition of it as a business and under current law, practitioners are required to hold a medical licence, which virtually none do. “We have a way of thinking in Japan that your body is a gift from your parents. Anything that defiles that vessel – from piercings to tattoos – can be viewed negatively.” 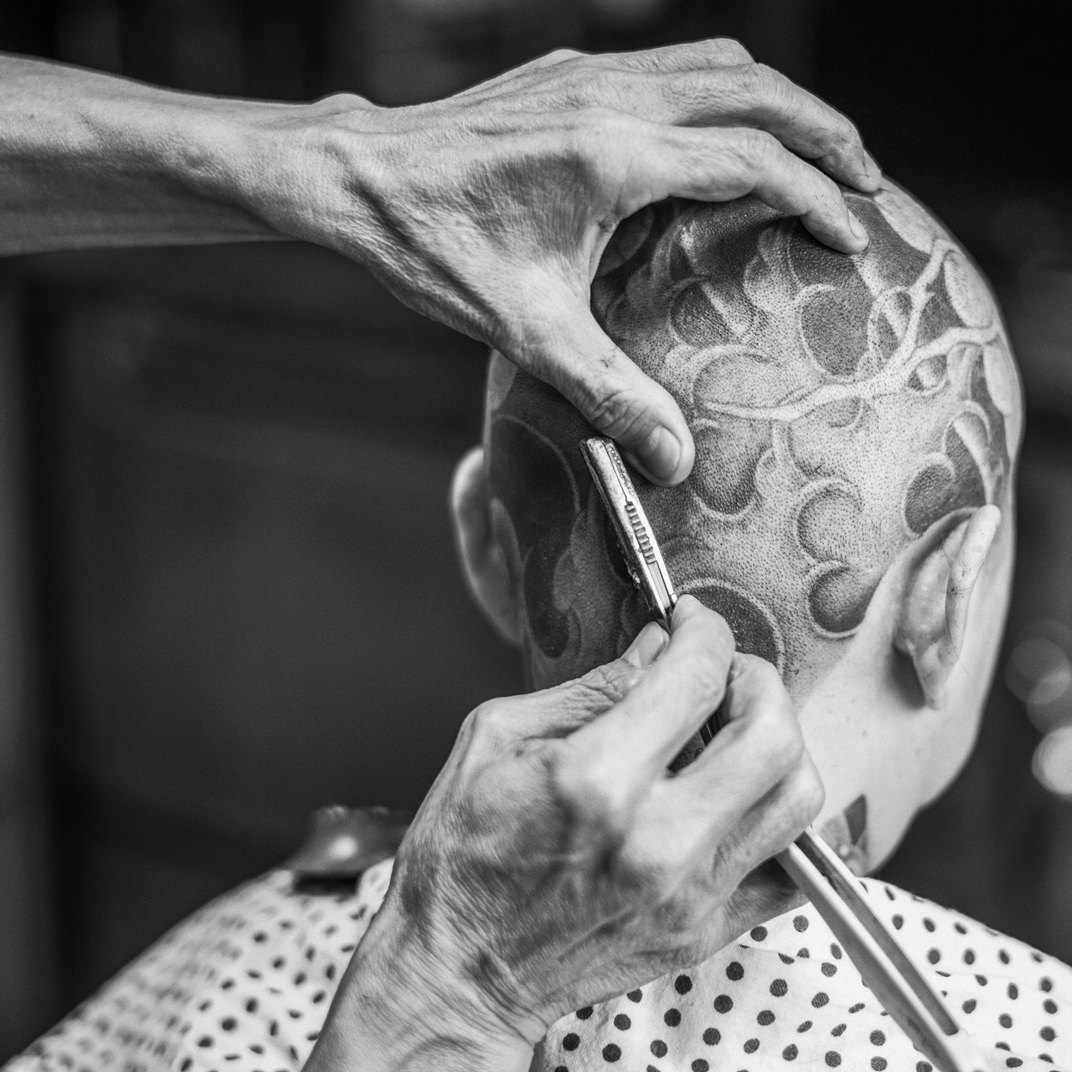 For Horiren’s parents, pursuing a career in art was one thing, but tattooing was far more controversial. Her mother’s diagnosis of brain cancer only complicated matters. “The treatment was very expensive,” she says. “The family business couldn’t support the cost so I felt I needed to be able to keep earning money to help.”

Horiren would spend the next few years developing into a successful mural artist until, at the age of 29, with her mum’s cancer in remission, she finally felt free to branch into tattooing.

Lacking in formal training and without a ‘master’ to learn from, Horiren started working on herself to practise – first her arms, then her legs. After a while, when she felt ready to try on others, she asked friends to help find someone willing to be her first canvas. “I was extremely nervous. Here I was putting something on someone’s body that would never ever go away.”

Horiren quickly became renowned for her commitment to Tebori: a ‘stick and poke’ method done by hand which requires exceptional skill, given that traditional Japanese tattoos are designed to cover much of the body. As Horiren’s reputation began to circulate, low-level Yakuza attempted a shakedown: turning up at the studio to demand money and try to scare her. 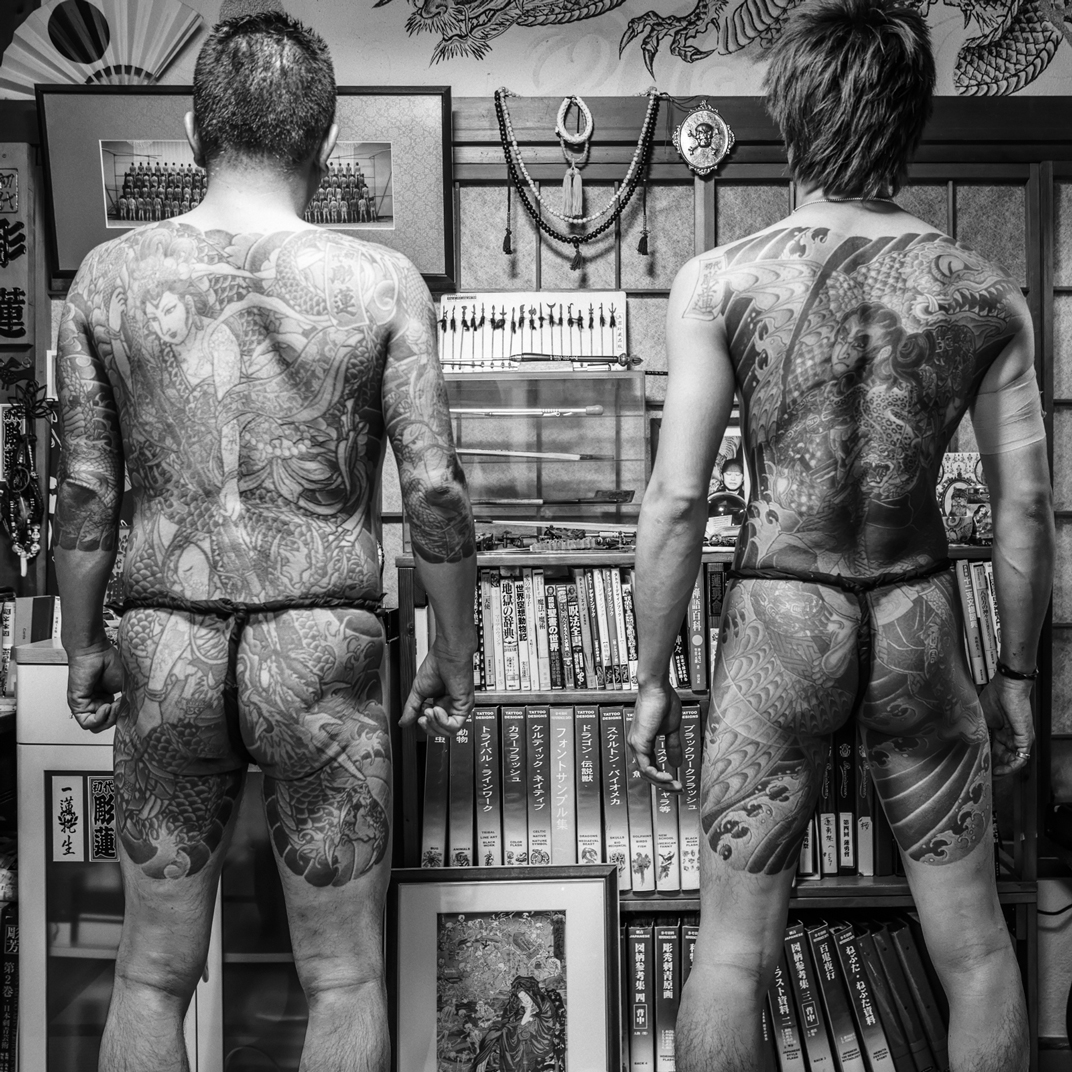 “Fortunately,   nothing ever came of it,” she says. “One day, however, a member of the Yakuza called and asked if I could tattoo him. That opened new doors. Gradually I had more and more clients coming from this world who wanted a style of tattoo called ‘Wabori’. That’s how I transitioned into doing big traditional back-pieces.”

These kinds of client requests have continued to shape Horiren’s style. Today she operates on a word-of-mouth basis, requiring a deep understanding of any potential client before going further. It may seem like a roundabout way of looking at her career, she says, but it’s important: Horiren still remembers the connection she felt with the people who did her very first tattoo.

“This is like buying a house – it’s a huge commitment – so we both need to take our time. If I think a person isn’t cut out for it, I tell them and we don’t work together.” 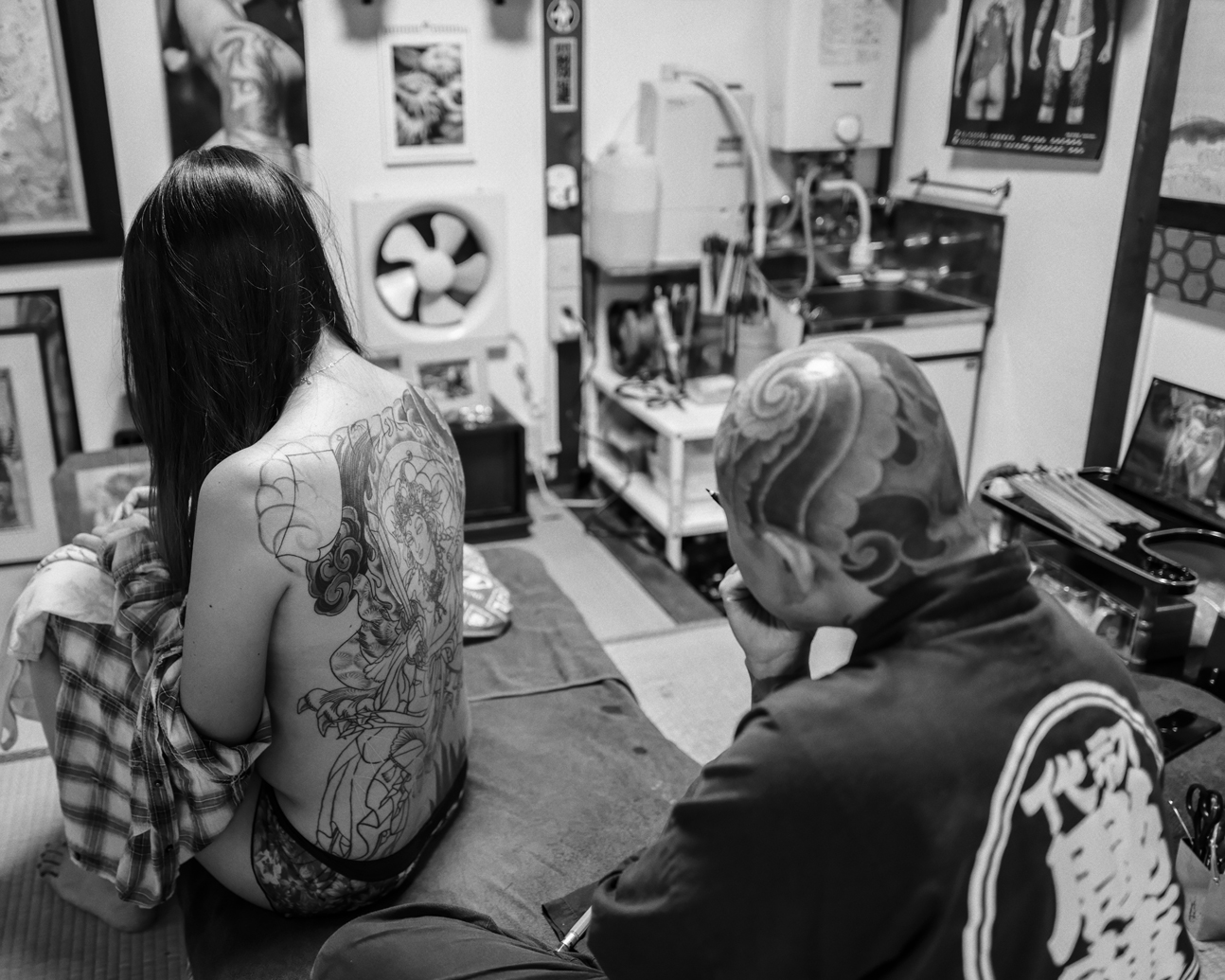 While the journey to this point has been challenging – Horiren didn’t tell her father about the tattooing until she turned 33, leading to a period of estrangement that only ended when her mother died seven years later – her work has helped her gain a better understanding of the wider world and to look deeper into her own culture’s traditions.

“Tattooing was the only thing I felt had ever been my own choice. Bartending, game design, mural art – these things were done out of necessity or because others had nudged me in a certain direction,” she says.

“Towards the end of her life, my mom said that if I believe in what I am doing then that is all that matters. And I carry that with me.”

Linkedin
RELATED ARTICLES
OTHER ARTICLES
A new podcast is opening up the conversation between trans women and trans amorous men in the hope of building coalitions.
Activists and campaigners are fighting back against new laws that would seriously undermine the ability to take industrial action, calling it an attack on fundamental workers' rights.
Following the release of his debut single, Deyaz talks battling addiction, dealing with his struggles through music, and building a budding music career from his living room.
Social prescribing connects people with non-medical support to improve their health and wellbeing – but some experts worry it’s just a stick plaster solution.
A new film from Berghaus traces the story of Adam Raja, who left behind a turbulent upbringing to discover the healing power of climbing.
At his West Bank restaurant, Fadi Kattan established himself as the voice of modern Palestinian cuisine. Now, he’s bringing his innovative, bold flavours to the UK’s capital.