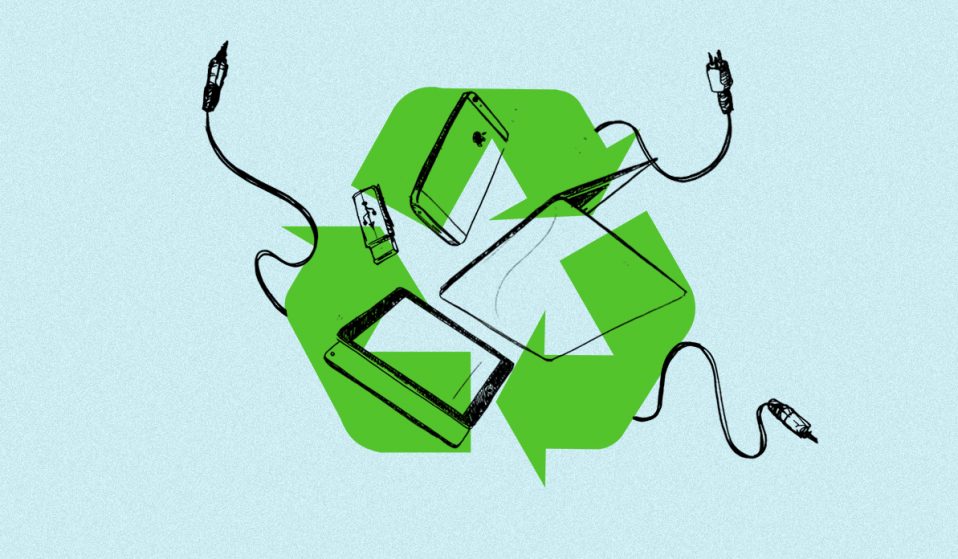 While consumers have forced the fashion industry to start confronting its ethical and environmental shortcomings in recent years, the tech world remains unchecked. Why?

While consumers have forced the fashion industry to start confronting its ethical and environmental shortcomings in recent years, the tech world remains unchecked. Why?

In the past few years, consumers have begun to push for a more sustainable, transparent fashion industry. In turn, the industry is responding: Vogue Australia has appointed a Sustainability Editor-at-Large, while many High Street chains – including Zara and H&M – have started ‘sustainable’ ranges.

Though the fashion industry is still a top global pollutant responsible for some of the most abhorrent working conditions around the world, consumer cognisance of these issues is rapidly expanding. Complete market transformation is very much on the horizon and although the process may be painstakingly slow, we seem to be moving towards it.

So what about the essential technology that powers our lives? We know that environmental and human rights abuses aren’t limited to fashion industry supply chains – so why do we seem less concerned with exposing tech industry supply chains? As the internet grows and absorbs yet more of our day-to-day wants and needs, we become beholden to yet more tech products. However, consumers are still relatively unbothered by where they came from.

In comparison to the heightened dialogue around the fashion industry, there’s an inherent lack of knowledge about tech supply chains, despite the fact that smartphone and tablet sales exceed one billion devices annually. For example, most consumers might not be aware that the main components used in their smartphones – and much of their personal tech – include cobalt, gold, silver, palladium and tin. A vast majority of these minerals are mined in developing countries under poor regulatory frameworks. As a result, the demand for the minerals that power our personal tech often result in violent human rights violations: most recently, an illegal gold mine in Indonesia collapsed, killing 13 people, with 100 more still trapped inside, and unlikely to be rescued.

“People’s human rights are abused on levels that many western consumers might find hard to imagine,” says Sophia Pickles, supply chain expert and Team Leader at corruption watchdog, Global Witness. “I often wonder if people would be so quick to buy a new laptop if it was their brother or mother mining down a 100m pit, without any safety equipment working under permanent risk of mine collapse. Or if their father had been beaten by security forces at a mine site so badly that he is now paralysed. Or if they had been thrown off their land by the big mining company and their entire life turned upside down as a consequence.”

Raw materials for personal electronics come from disparate locations around the world: palladium mostly comes from South Africa and Norilsk, Russia, while silver comes from mines across all continents. Meanwhile, the manufacturing of parts happens in Korea, Taiwan, China, Thailand, Malaysia and Japan, before devices are assembled in countries like Brazil and India, as well as China and Korea themselves. The vastness of these supply chains means that transparency – and accountability – are easy to dodge. The physical production of tech products is also energy-intensive, as the global travel required in tech supply chains is a significant contributor to the planet’s greenhouse gas emissions.

Frighteningly, most smartphones and tablets have a life of around three years, becoming irrelevant in the consumer cycle when flashier ‘must-have’ products are released into the market. Tech manufacturers purposefully engineer “planned obsolescence” into products to ensure the cycle continues, with little regard for the human or environmental impact. This means that big tech brands are purposefully designing their products to fail, as a ploy to keep consumers ‘needing’ to buy new ones. In 2018, for instance, Apple and Samsung were fined €10m and €5m respectively for “dishonest commercial practices”, including the release of software updates to their smartphone products designed to cause “serious malfunctions and significantly reduce performance, thus accelerating phones’ substitution”.

Adèle Chasson, a Policy Officer at Association Halte à l’Obsolescence Programmée (HOP), a French NGO focused on ending the practice of planned obsolescence, says that, in France, smartphones only last for around 18 months in the consumer cycle. Chasson argues that the short life cycle of personal tech products is the symptom of a consumerist society. “Products that are designed to fail not only cause important environmental issues – such as unnecessary resource extraction and exponential waste generation – it also deprives citizens from the freedom to consume in a durable and responsible way,” she says. “From your dishwasher to your tights and your car, most products we use everyday are not made to last and difficult to repair.”

As a result, the United Nations University estimates that, according to current growth, we are now seeing 50 metric tons of e-waste generated annually. Helio Matta, CEO of the Akatu Institute, a Brazilian NGO promoting conscious consumption, notes the huge amount of resources are needed to create a single smartphone. “An average of 28.6 kg of raw materials are extracted, which must be transported, processed in the form of components, taken to the assembling plants, resulting in a smartphone that is then transported to distribution centers and finally to the retail stores.”

Of course, this is by no means an exhaustive list of the adverse impacts of personal tech production and supply. The ethical crisis facing tech supply chains is a complex global web of human rights and sustainability nightmares: getting to the heart of why there isn’t a greater push for more ethical tech is even more complex, given the stranglehold personal tech has on modern life in consumer-driven society.

To socialise, work, have access to education, engage with political processes and practice free speech – in other words, to exercise basic human rights – one must be connected through the internet and personal tech. A growing body of work – including the UN suggesting internet access is a basic human right – supports the notion that access to technology and poverty are mutually dependent. Personal tech, therefore, is no longer an optional addition to contemporary life – it’s a necessity.

So why does the origin of the products that power our lives seem to bother us so little? There’s the obvious apathy instinct – the ‘out-of-sight-out-of-mind’ attitude that let the fashion industry go unchecked for so long. Indeed, interest in ethical supply chains in the fashion industry was injected with new fervour following the Rana Plaza collapse, an avoidable tragedy that killed over 1,100 garment workers, and injured more than 2,500, in a Bangladesh factory – one that, five years later, consumers still haven’t forgotten. The tech industry’s supply chains – as cynical as it sounds – are yet to have such a high profile disaster.

Apple is one company that has come under public scrutiny for alleged abuses in its supply chain. Advocacy group China Labour Watch recently exposed conditions inside a Chinese factory making Apple iPhone parts, including workers apparently not being provided with the right health and safety equipment to carry out their work, as well as being forced to live in subhuman conditions. Apple took an arms-length approach – traditionally used as a defence by large transnational corporations with complex supply chains – launching an investigation that ultimately did not find any violations, but pledging to do all they could “to protect the workers” in their supply chain. In reality, that meant vague reporting on its suppliers, asking them to adhere to a code of conduct essentially transferring responsibility down the chain – and out of Apple’s hands. (Apple was asked for comment on this but did not respond, and continues to sell around 200 million iPhones a year.)

So what would happen if the public was suddenly energised to mobilise? When it comes to personal electronics like smartphones, huge companies like Apple, Samsung, Nokia, Blackberry, HTC, Sony Ericsson, LG and Motorola are the titans of the industry. Indeed, the consumer tech market is a powerful oligopoly: while giving the appearance of choice, the market dominance of a small few means that it remains a myth. Unlike fashion, where new market entrants and local, grassroots businesses can be successful, the tech industry is powered by the mighty. Barriers to entry in the market are formidable, as its oligopolistic nature precludes new entrants from being competitive. Even bare start-up costs – such as marketing, production, distribution, expertise and patents – are prohibitive.

Ethical phone company Fairphone – a Dutch company producing ethically made phones in small quantities – makes easily repairable phones that are designed to last, made from fair trade minerals, in supply chains that ensure good working conditions at every step. (It also promotes reuse and recycling.) Lora Haspels, a spokesperson for the company, says that tech supply chains are so complicated, it can be difficult for consumers to decipher where their products originate. “This is rarely discussed and hidden behind sleek marketing. This makes it very difficult for consumers to act responsibly on something they know nothing about. Fairphone originated out of what was first an awareness campaign for conflict minerals in consumer electronics. Since the start we have put transparency as one of our core values, wanting to open up the supply chains and improving it step by step.”

But despite its attractive model, Fairphone has yet to disrupt the tech market, nor has it inspired further innovation from existing companies or new startups – evidence, perhaps, that the consumer isn’t yet interested in ethical tech.

Consumer action around tech hasn’t reached a common consciousness. But in order to move towards a sustainable, ethically driven future, we must start thinking about the origins of the devices that we depend on, and how we can demand better practice from companies – in the same way we do with the clothes we wear. For Mattar, this starts with consumers reflecting on their choices, and using “the old product at its maximum levels of utility, looking for ways to postpone or reverse its obsolescence.” This can include repairing rather than replacing, ensuring tech is sent to the appropriate recycling program, traded for another model, or sold as a second-hand product rather than being sent to landfill.

Our personal devices allow us to read, learn, share opinions, search for jobs, speak to family and friends, along with a whole host of everyday, helpful functions that generally make life easier. But it’s imperative that we ask ourselves if that personal enrichment is worth the daily abuses to other humans and our environment, and if we’re willing to continue wearing those abuses in the smartphones, tablets, laptops and other gadgets that power our lives.

Linkedin
RELATED ARTICLES
OTHER ARTICLES
Following the success of her debut novel, the Tottenham native is restating her commitment to the place that made her.
Photographer Phyllis Christopher recalls capturing sex and protest at a time when the city had become a haven for the queer community.
While protests over abortion rights rage in the US, access to abortion services is still almost nonexistent in parts of the UK.
Our new magazine is here, starring the inimitable Mitski. Order your copy now and join us on a trip around the world.
A group of Ukrainians living in Poland are helping Ukraine withstand Russia’s brutal invasion by buying supplies and shipping them directly to the war’s frontlines.
Writers Matt Foot and Morag Livingstone explore how four decades of collusion between the government and the police have slowly eroded our right to protest.