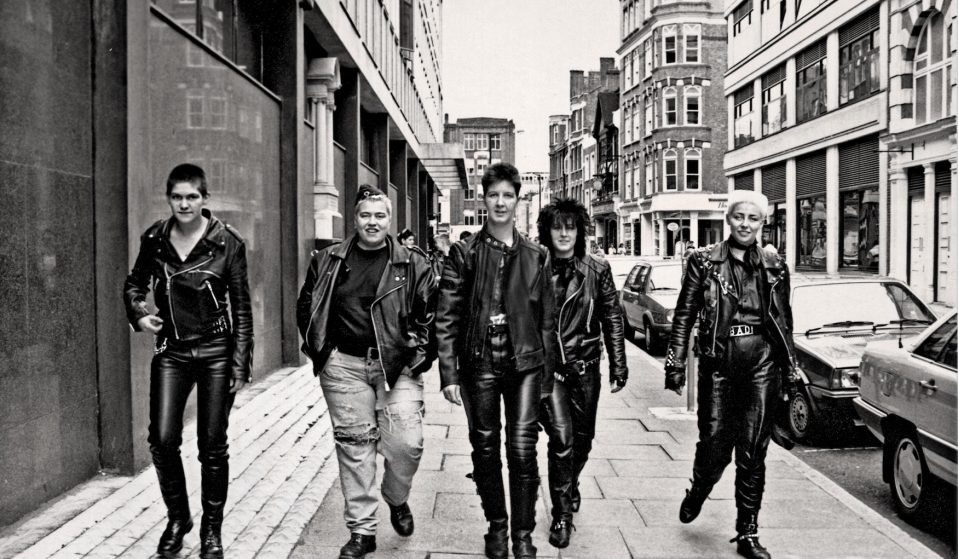 A new exhibition is spotlighting a group of activists who ran riot through 1980s Britain and would profoundly influence lesbian culture.

A new exhibition is spotlighting a group of queer activists and artists who ran riot through 1980s Britain and would profoundly influence lesbian culture.

“I grew up in quite a conservative family from an army background; I’d never met any gay people,” says artist and curator Atalanta Kernick. “When I started developing feelings for women around me, I really thought I was going to turn into some werewolf type character who grew hair all over my body and couldn’t go out in the daytime. I thought it wouldn’t be possible for me to have a normal life.”

Along with co-curator Kat Hudson, Atalanta is meeting with me over Zoom to discuss the Rebel Dykes Art and Archive Show – their current exhibition celebrating lesbian culture from the 1980s to the present day. The show has been created to coincide with Siobhan Fahey, Sian Williams and Harri Shanahan’s ‘Rebel Dykes’ documentary: an oral history of the underground radical lesbian scene of 1980s London, which will be released nationally later this year after premiering at BFI Flare in March. 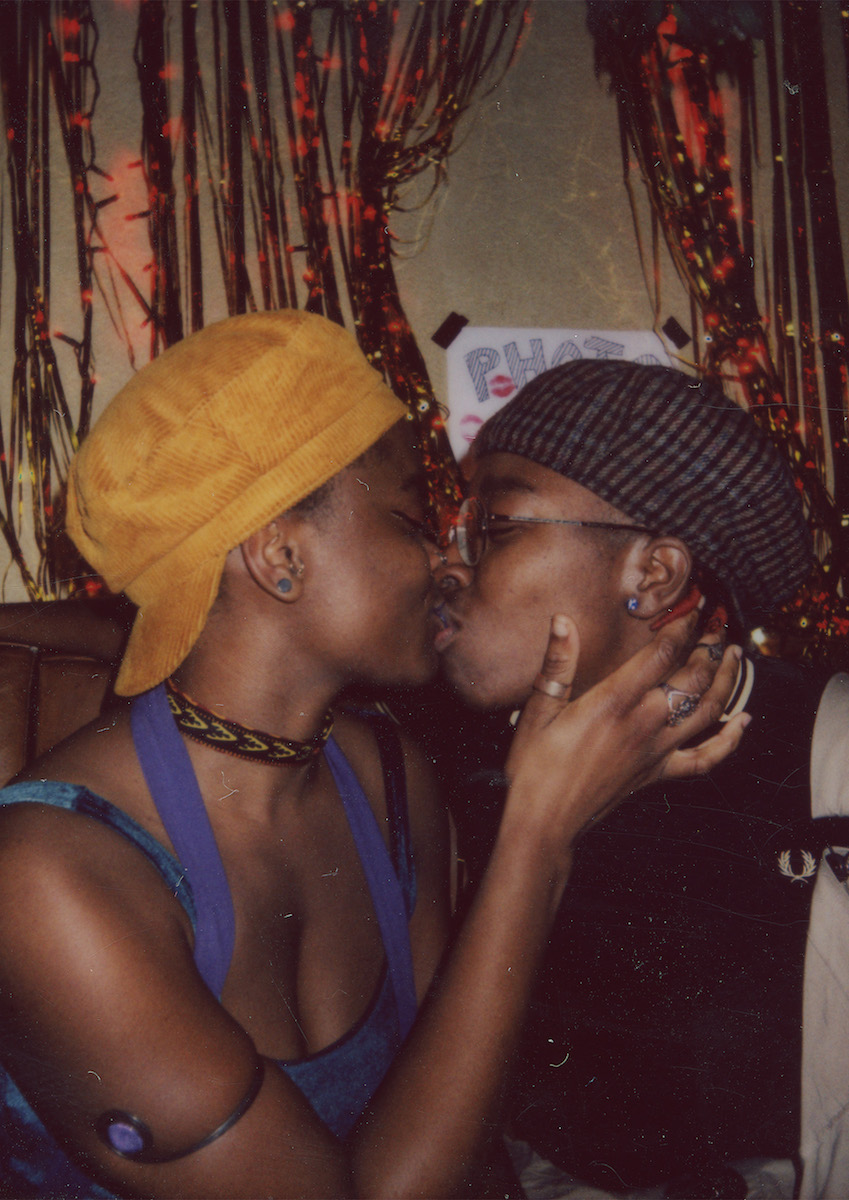 Through animation, archive footage and interviews, the film tells the story of a community of artists, musicians, activists and performers who met at the Greenham Common Women’s Peace Camps and proceeded to run riot through 1980s Britain agitating against Thatcher’s oppressive policies.

Atalanta hopes the show will offer queer woman the representation she desperately needed in the early stages of coming to terms with her sexuality. “It is so important to have role models and to see yourself reflected back in a positive way,” she says “Fortunately, I did end up meeting an older woman in my hometown who was bisexual. She told me to go to Greenham, and the rest is history.”

At Greenham, the women broke into the RAF base, which was the centre of the peace protests, and caused millions of pounds worth of damage to a state of the art spy plane. In London, they squatted in dozens of empty properties around Brixton and Peckham, organising Pride marches and ACT UP actions. They even abseiled into the House of Lords and hijacked The Six O’Clock News in protest against Section 28.

“We tried to combat oppression in many different forms,” Atalanta remembers. “I’d say that we truly tried to be intersectional before the word existed.” 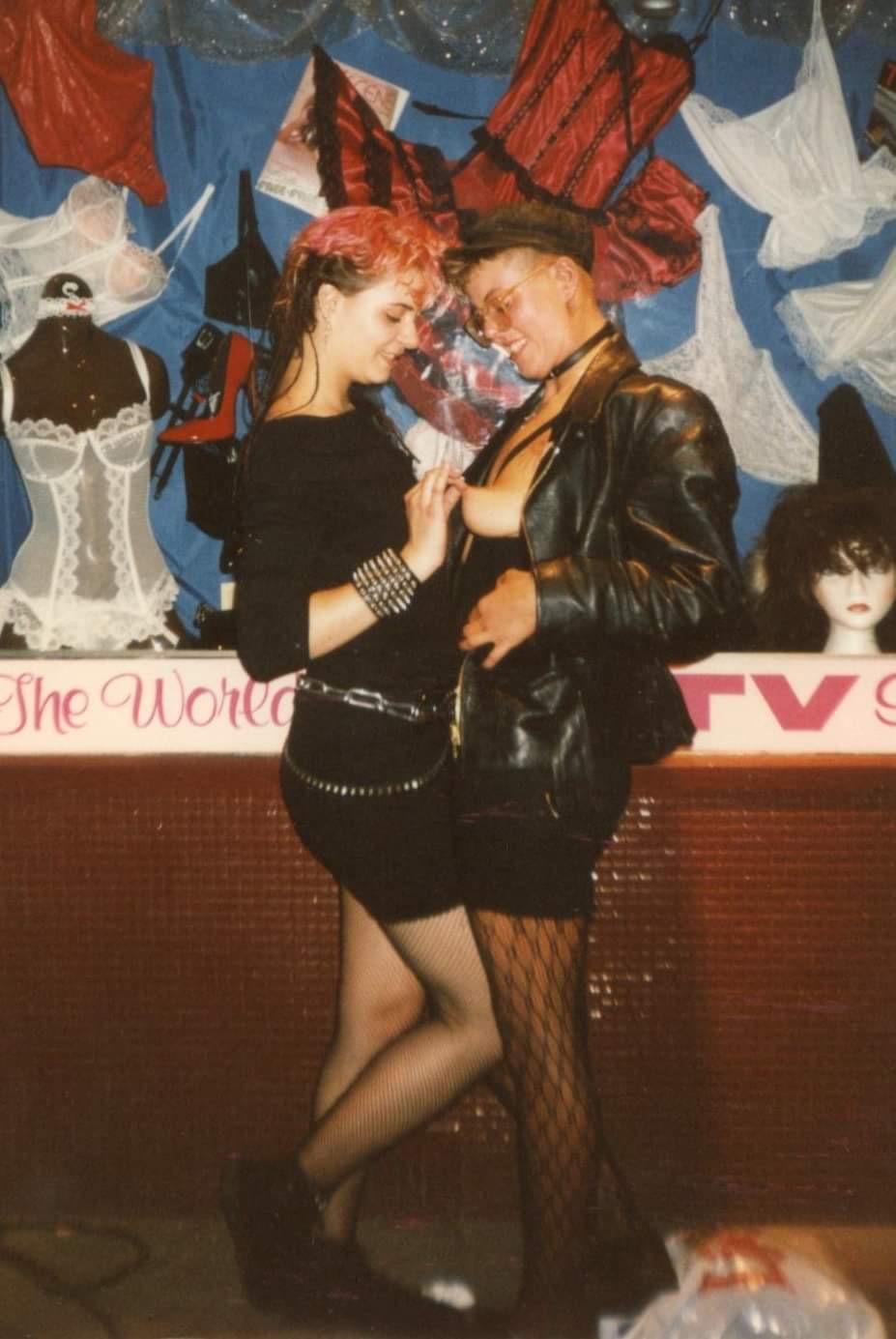 Jo and Siobhan by Laney Shimmin

Alongside their significant and often uncelebrated contributions to political activism, the rebel dykes had loads of fun. They performed across London in punk bands Mouth Almighty, Sister George and The Sluts From Outer Space. They put on club nights and rode around the city in a motorbike gang called The Black Widows. They created and supported lesbian erotica magazines like ‘Quim’, ‘Shocking Pink’ and the infamous ‘On Our Backs’. They opened Chain Reaction, a legendary lesbian S&M club in Vauxhall where leather dykes put on erotic performances with and for each other. And through all of that, they formed a close-knit, inclusive chosen family of loud, proud, sex-positive lesbians whose impact on queer and wider culture is still felt today.

Yet despite this legacy and influence, it has been left to the rebel dykes themselves to archive their history and share it with the world. The inaugural exhibition at the newly relaunched Space Station Sixty-Five in Kennington brings together photography, video footage, paintings, installations, literature and ephemera made by and featuring key figures from the film. 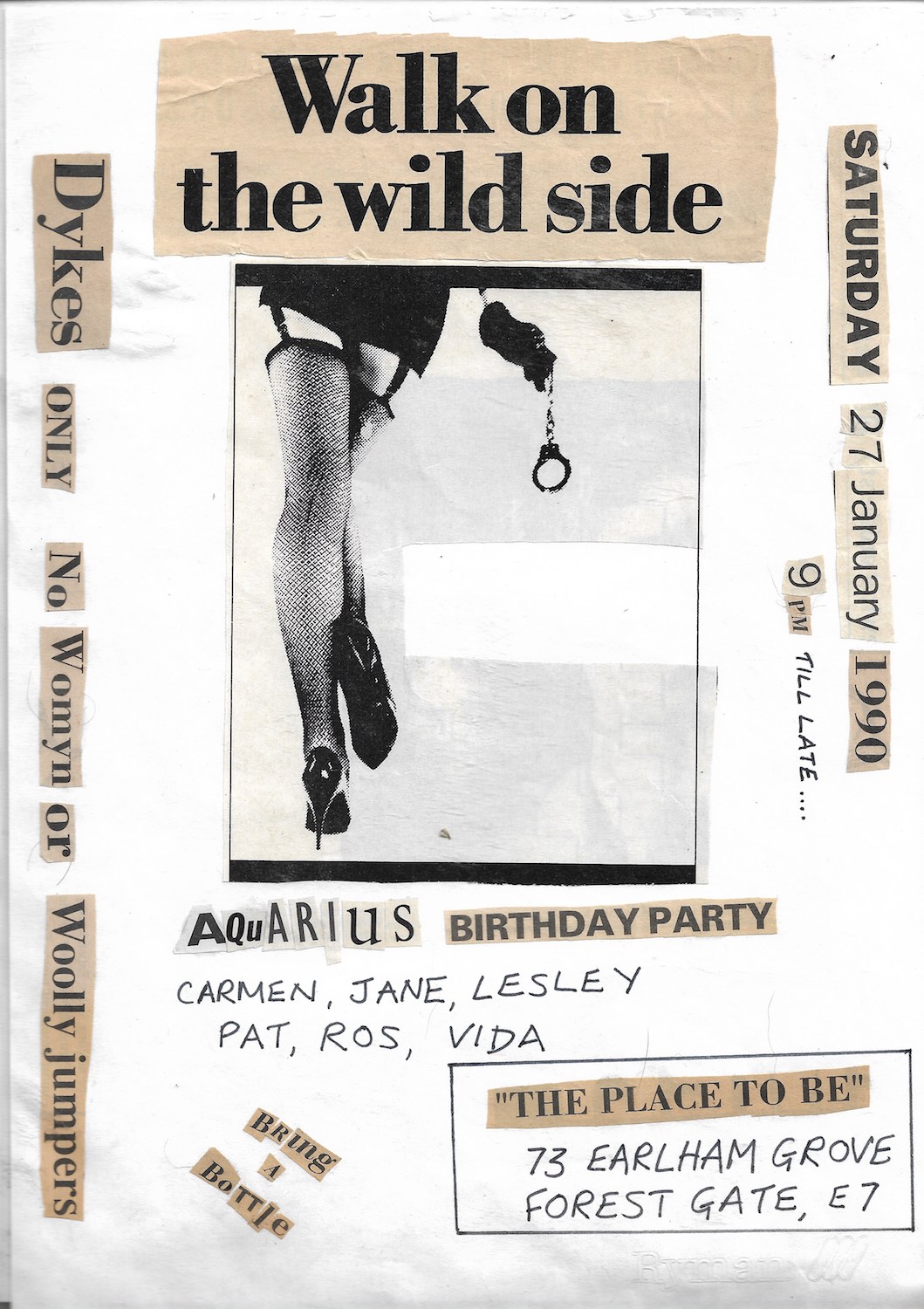 There are old photos depicting Atalanta, Siobhan and their friends at parties, gatherings and protests. There’s an oil painting of dykonic musician and DJ Debbie Smith by painter Sadie Lee, and a copy of Del LaGrace Volcano’s banned sex-positive lesbian photography book ‘Love Bites’, which even London’s queer bookshop Gay’s The Word refused to stock for fear of being raided by the police.

And while many younger lesbians have found a home online, there’s something appealing about the physical presence of an exhibition. Especially after a year in which galleries and queer spaces have largely been closed, and when only one dedicated lesbian bar still exists in the whole of London. It’s a joyful space to walk around. There are photographs of lesbians throwing parties and starting bands. There are punks, bikers, clubbers, squatters, drag kings, and kinksters. 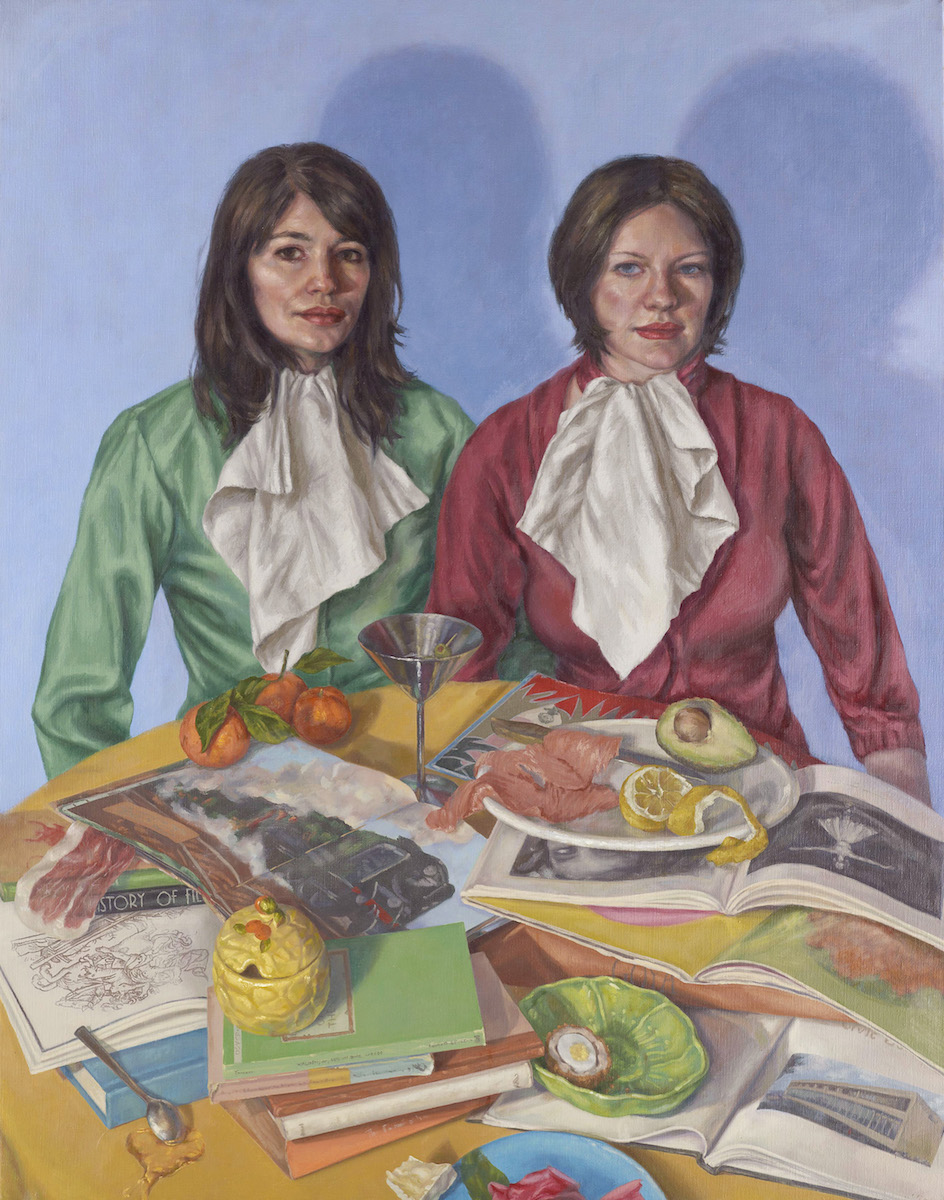 Portrait of the Artist and Her Wife by Roxana Halls

Alongside all of this, there are contributions from a new generation of rebel dykes and queer artists, including Bella Podpadec of punk band Dream Wife, performance art duo Mystical Femmes and punk-influenced visual artist Rene Matić. And despite a separation of thirty odd years, there’s a striking similarity between the original rebel dykes and their millennial and their Gen Z successors. The work produced by the younger artists displays the same spirit of fun, alongside a sense of unrest, dissatisfaction and an uneasy fear of rights being taken away.

“That kind of intergenerational link seemed important to explore,” explains Kat, the exhibition’s co-curator and a member of the younger generation of lesbians inspired by the rebel dykes. Having worked in queer nightlife venues for several years, a perceived cultural gap led to Kat creating ‘Lesley Magazine’ – a free print arts, news and nightlife listings publication by and for LGBTQIA+ womxn, trans and non-binary people.

Kat came into contact with the rebel dykes when preparing to launch the magazine in 2019. “Karen Fisch [a rebel dyke and drag king] came up to me in the smoking area at the Royal Vauxhall Tavern and said ‘I heard you’re doing a show, I have a bunch of stuff in my garage if you want to have a look.’ So I went round and pulled out loads of old copies of ‘On Our Backs’ and ‘Quim’ and that really inspired ‘Lesley Magazine’. 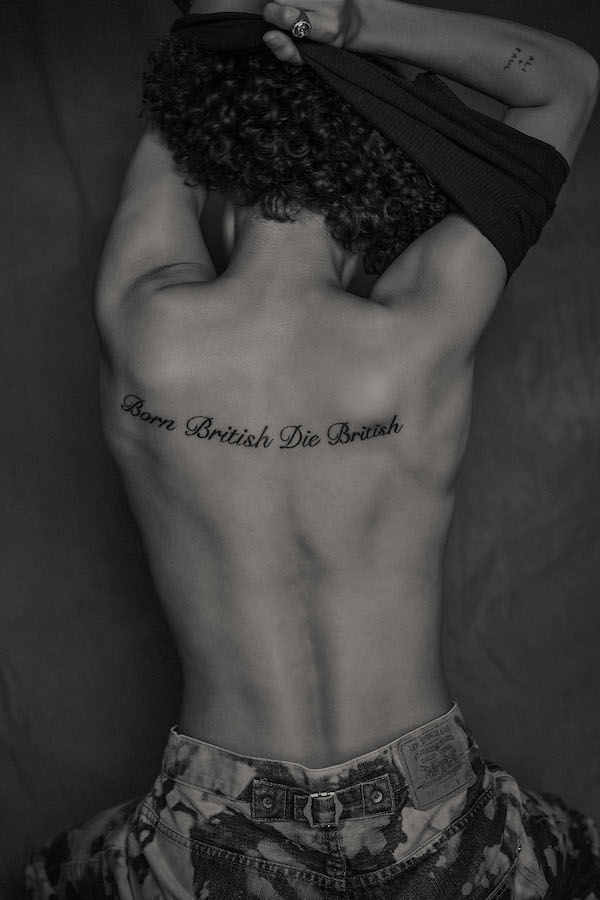 “I think it took me a huge amount longer to figure out who I was because there wasn’t a place to go to where I could meet those people, especially growing up in the 90’s with Section 28 in full swing,” says Kat. “If I hadn’t met older lesbians working at [central London LGBTQ+ venue] Retro Bar and later through the rebel dykes I don’t think I would have had the confidence to pursue my own identity in the same way.”

The fact that these older role models can be so difficult to find is indicative of the lack of visibility that lesbians often have, both within the LGBTQ+ community and in the wider world. “Lesbians suffer from gender oppression, just like other women do, but because we are women in relationships with other women, this is exacerbated further,” Atalanta points out. “There’s a lot of wage inequality, which I’ve noticed as I’ve gotten older. More of my lesbian friends have ended up on low incomes, in social housing and dealing with health issues.”

“Transphobia is a more pressing issue at the moment, AIDS was a hugely pressing issue back then” continues Kat. “All these things that are going on in our community are rightfully at the forefront, but it does then mean that the invisibility of lesbian culture is yet to be addressed, because they hasn’t been the same amount of urgency, and that can be hard for lesbians.”

After so long in the shadows, Kat and Atalanta hope that the exhibition will bring lesbian culture back into the spotlight. “This is a real celebration of dyke culture. And dyke fun! There has been this stereotype of lesbians being no fun but it’s just so not true,” Kat says. “I think if you need any proof, just come to the show.” 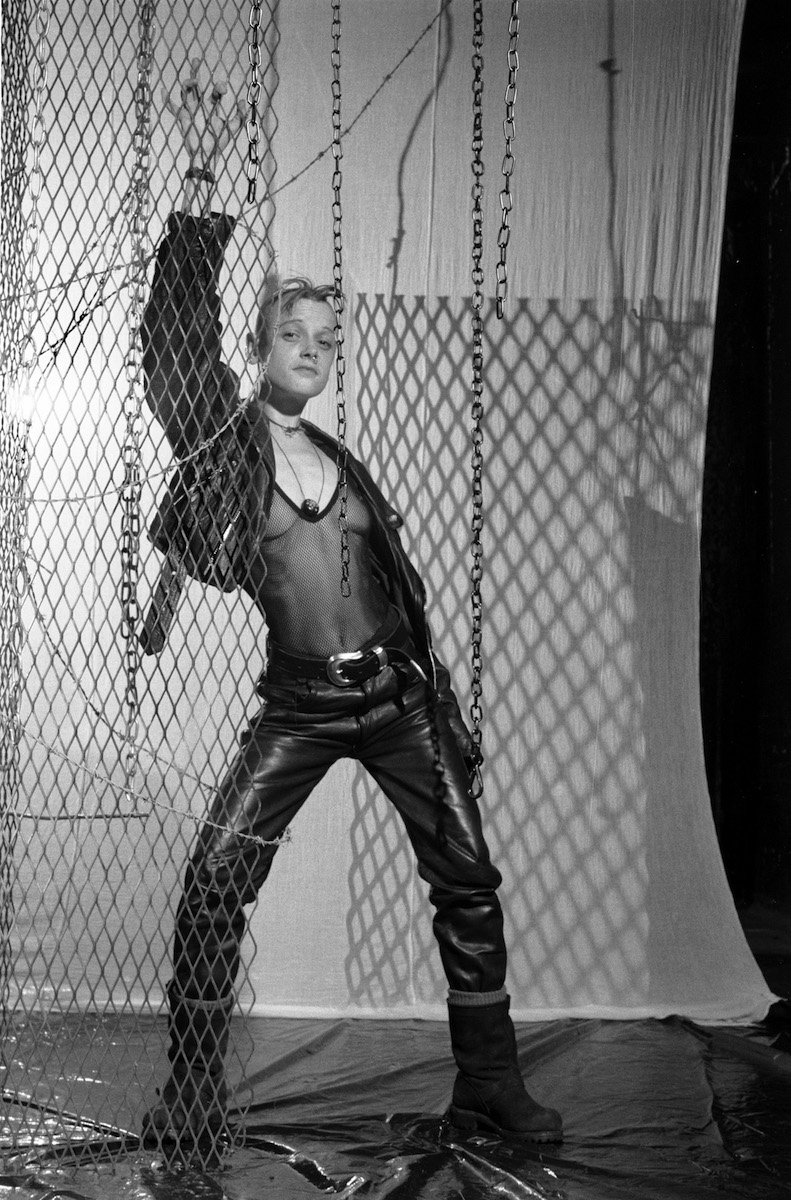 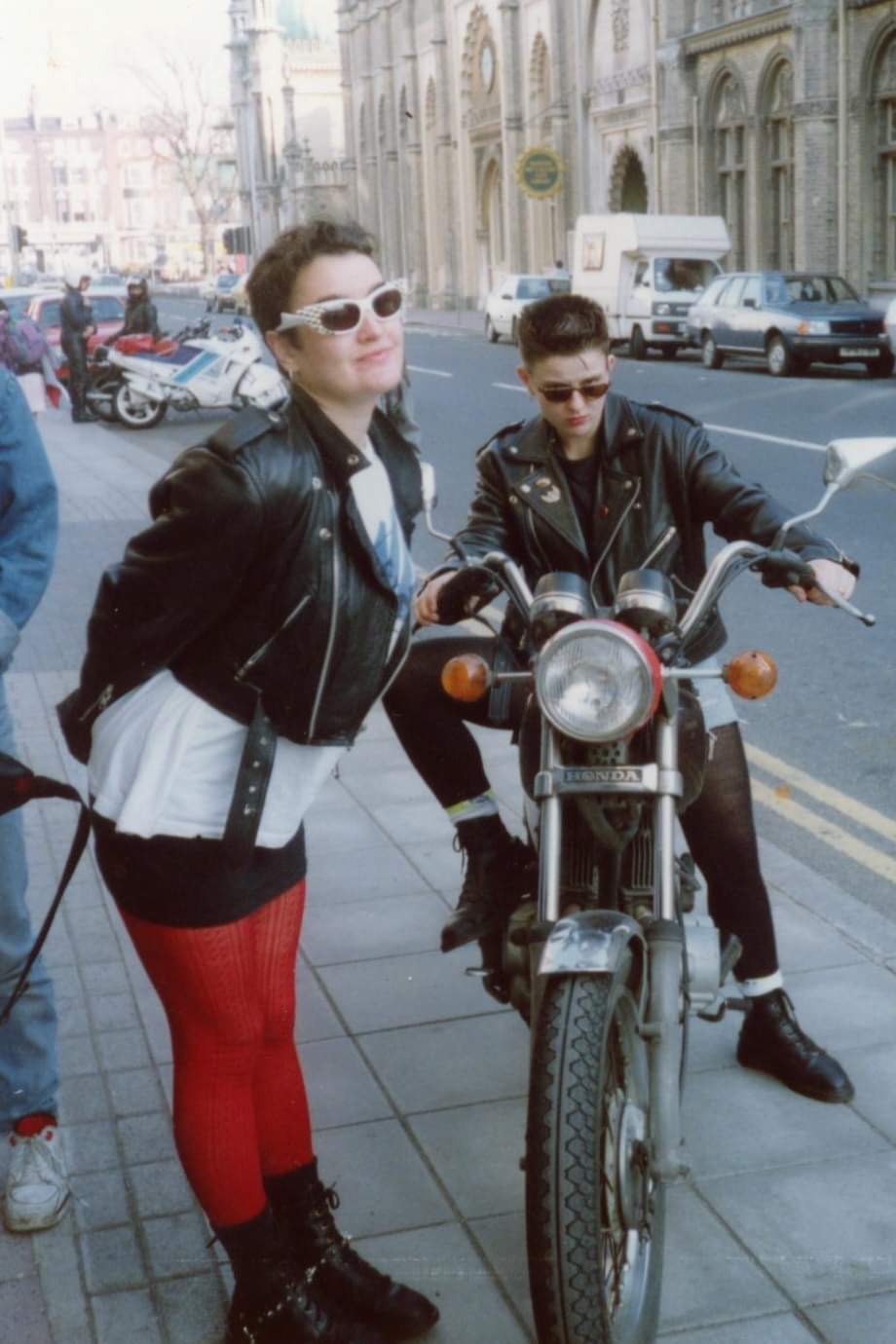 The Rebel Dykes Art and Archive Show is on now at Space Station until 17 September 2021.

Linkedin
RELATED ARTICLES
OTHER ARTICLES
Since 2007, Gideon Mendel has made 20 trips to document floods in 13 countries. The result is an alarming record of what has already been lost to the climate emergency.
Activists and campaigners are fighting back against new laws that would seriously undermine the ability to take industrial action, calling it an attack on fundamental workers' rights.
David 'Dee' Delgado’s photo project is about honouring and uplifting the city of his youth, and a world rapidly disappearing under the relentless onslaught of gentrification.
A new law change is enabling Britain’s donor-conceived children to know the truth about their origins – but campaigners say the fertility industry must do more to protect people.
Theo McInnes’s photos of the annual event provide an intriguing snapshot of contemporary Britain.
After fleeing the war in Ukraine, people are finding it impossible to secure affordable and decent housing in the UK.