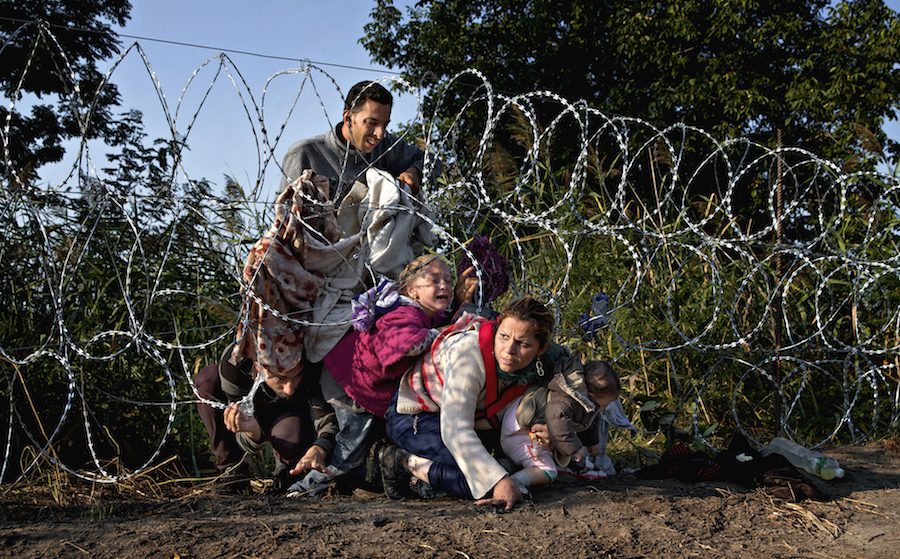 Since Spring 2015, Jacob Ehrbahn has been documenting the worst refugee crisis in recent history. He is determined to make sure the issue, which is still devastating lives, does not fade from public attention.

Since Spring 2015, Jacob Ehrbahn has been documenting the worst refugee crisis in recent history. He is determined to make sure the issue, which is still devastating lives, does not fade from public attention.

In 2015, more than a million migrants and refugees crossed into Europe, with over 75 per cent fleeing conflict and persecution in Syria, Afghanistan or Iraq. Thousands died attempting to reach its shores and, while some countries opened their arms, others closed their borders and erected fences. Almost six years on, while the number of asylum seekers is now down, the devastating impact of this crisis is still very much ongoing.

Photographer Jacob Ehrbahn, who was shooting for the Danish daily national newspaper Politiken at the time, was sent over to report on the unfolding crisis. “In late June and the start of July [2015], I went to Lesbos, because all these small boats were coming in,” he recalls. “From there, I was in the middle of the story.” He then went on to travel to Serbia, and then to Hungary, where he photographed the daunting fence capable of delivering electric shocks erected by the Hungarian government to deter migrants. 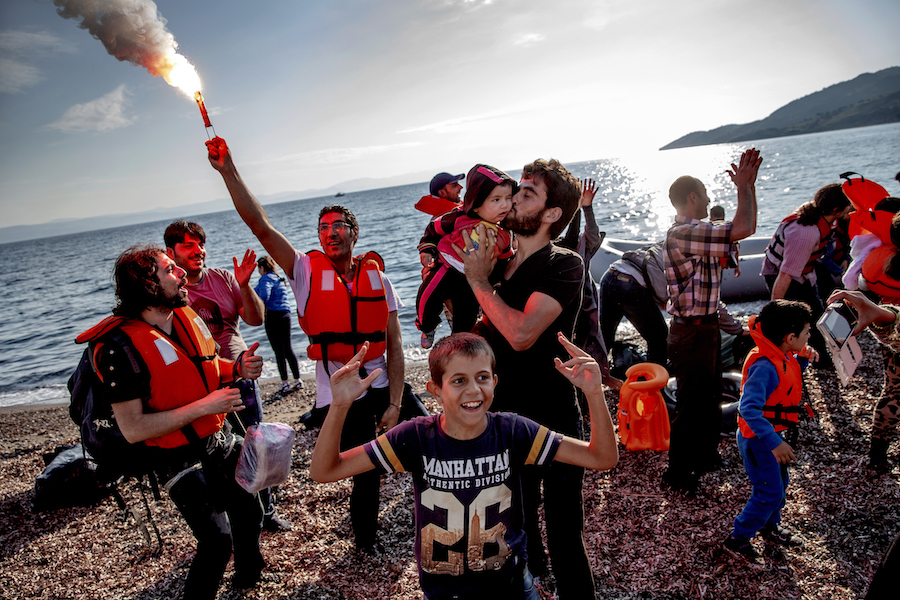 After 2015, Ehrbahn noticed that the mainstream news’ interest in the story was “fading out”. Working with another reporter, Ehrbhan was determined to carry on documenting what was happening, undertaking numerous trips to Europe between Spring 2015 right up until December 2020 to document the lives of the refugees and migrants who dream of a better life in Europe. These photos are now collected in a new book, titled Dream of Europe (Dewi Lewis).

In the book, Ehrbahn captures people out in the Mediterranean Sea outside Libyan waters, and at various locations around Europe – in refugee camps, under motorway bridges, in run-down factory buildings and at border crossings living in appalling conditions. These are young men, women, children, and entire families struggling each day and living in free fall. “I call it a parallel universe that most Europeans don’t know anything about,” says Ehrbahn.

Ehrbahn says that through his project, he got to know many of the refugees and migrants personally, and spent a long time trying to understand their stories. “Over the years, I happened to bump into the same people in different places. They go from being stuck in one place to being stuck in the next place.” 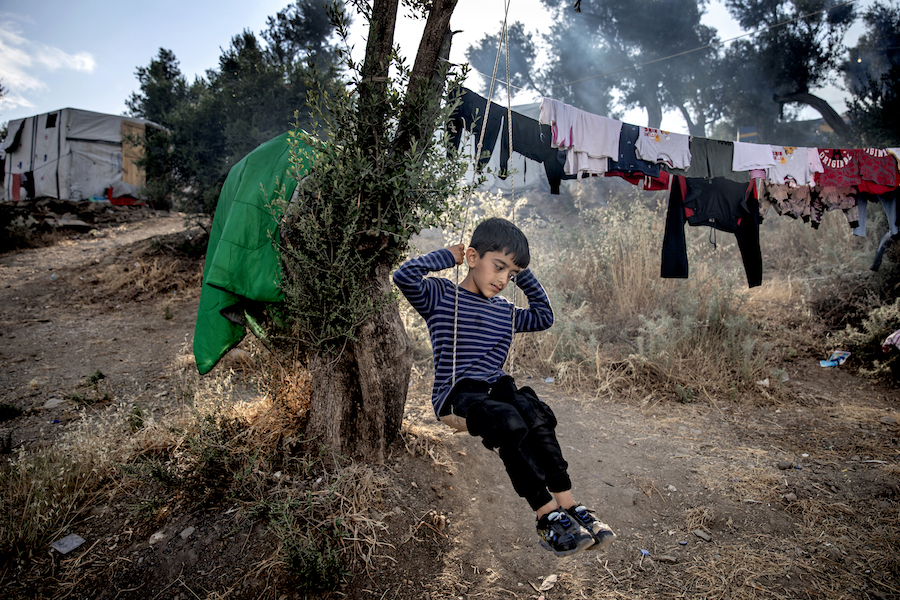 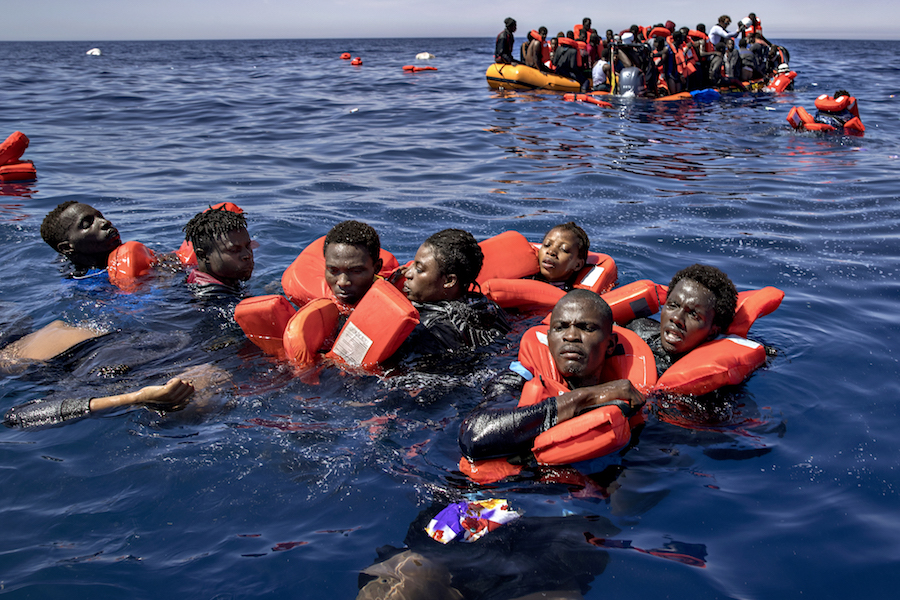 A group of refugees in the water try to keep calm and stay together to protect those without life jackets. The Mediterranean Sea, SAR-zone outside Libyan waters, October 2017

Of all the place Ehrbhan visited, he spent the most time in Moria: the largest refugee camp in Europe, until it was burned down in September 2020. “I was there when people were lining up [for the camp]. They were sleeping in lines outside this reception centre for days in tropical rain. The weather was really rough,” he recalls. Visiting the camp from the moment it opened, right up until it burned down, the photographer describes it as “just inhumane all the whole way through”.

He continues: “You can deal with these circumstances [in Moria], for a week, for months maybe… but when you show up, you need to go for an interview so they can begin your asylum case. And I’ve met a lot of people where their first interview was scheduled a year in the future. So they just have to sit around in these circumstances with their kids – up to 40 per cent of the people in the camp were children – for a year before they can even have their first interview. I think all human beings will break down in a situation like that.”

Ehrbahn is keen to emphasise that the publication of the book does not mean the end of his documenting the impact of the crisis. “I just felt that it was important to get something out now. Because first of all, I see it as a historical document for the future, but I also like the idea of it holding it up a mirror to Europeans and saying, ‘Okay, this is what is happening, right now. Let’s talk about it.’” 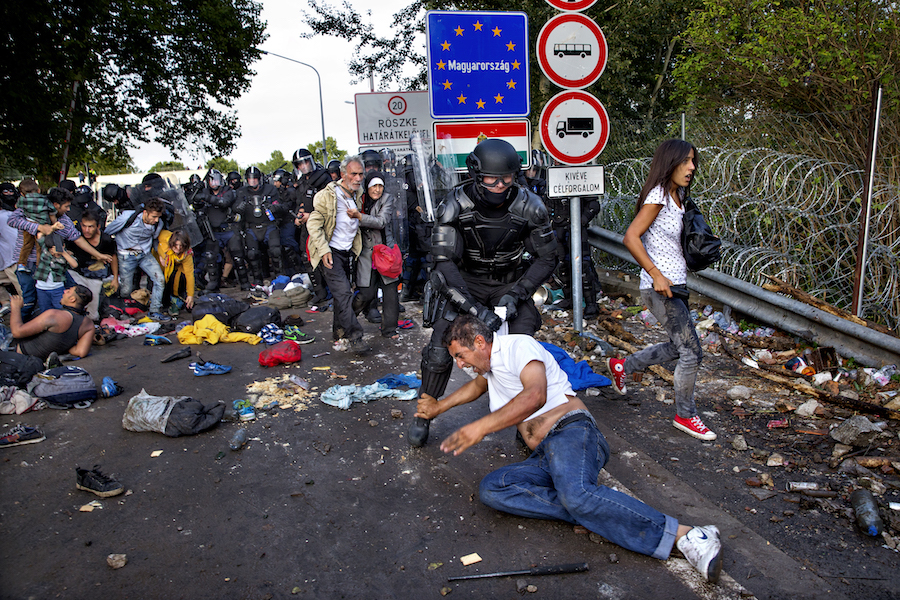 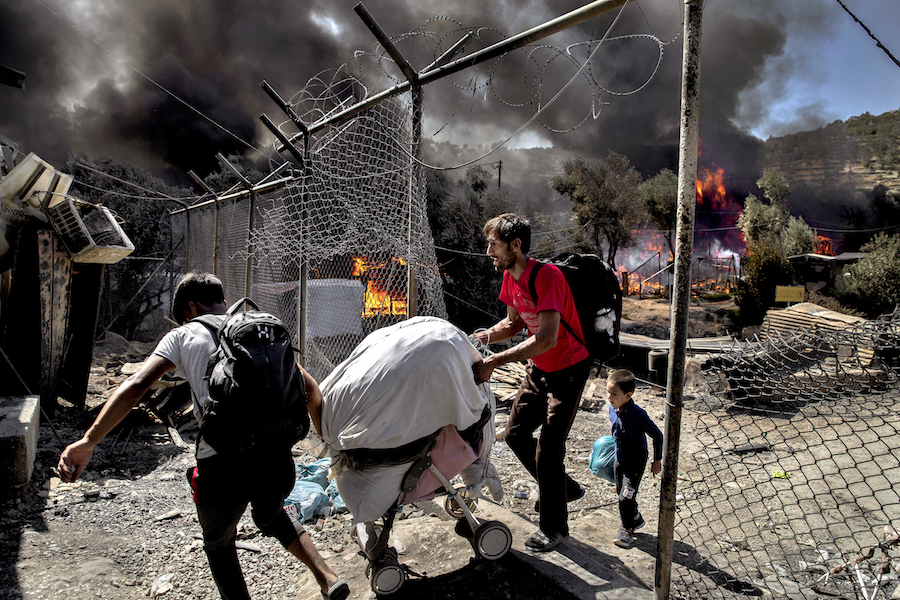 The last residents of the Moria camp salvage what they can and leave the burning ruins. September 10, 2020 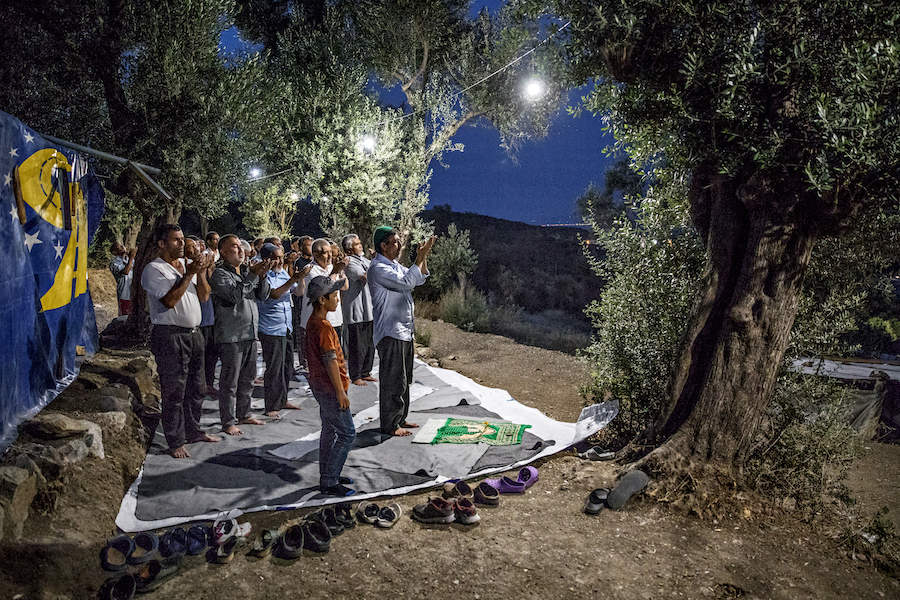 In the jungle, the makeshift part of the Moria camp, a group of men meet for prayer every night. Lesbos, June 2019 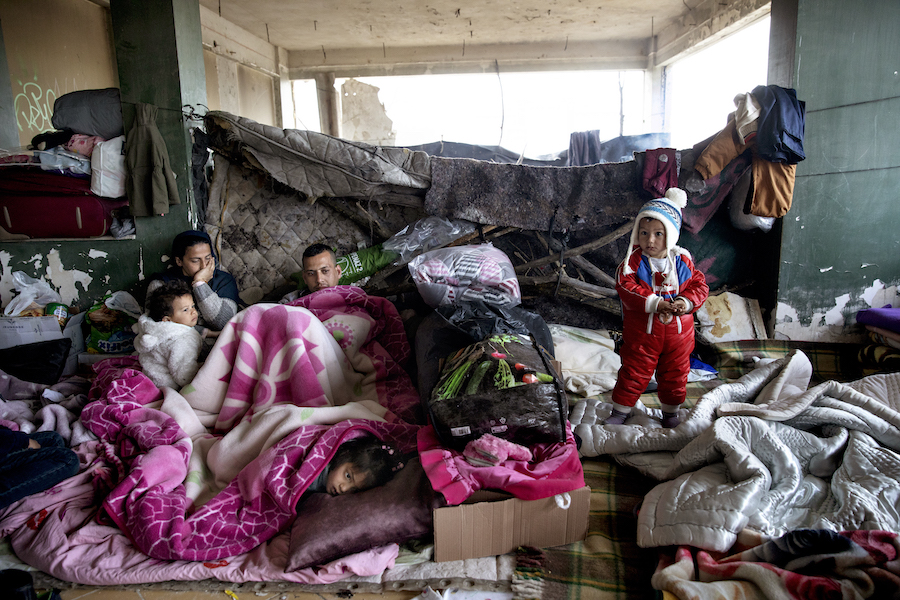 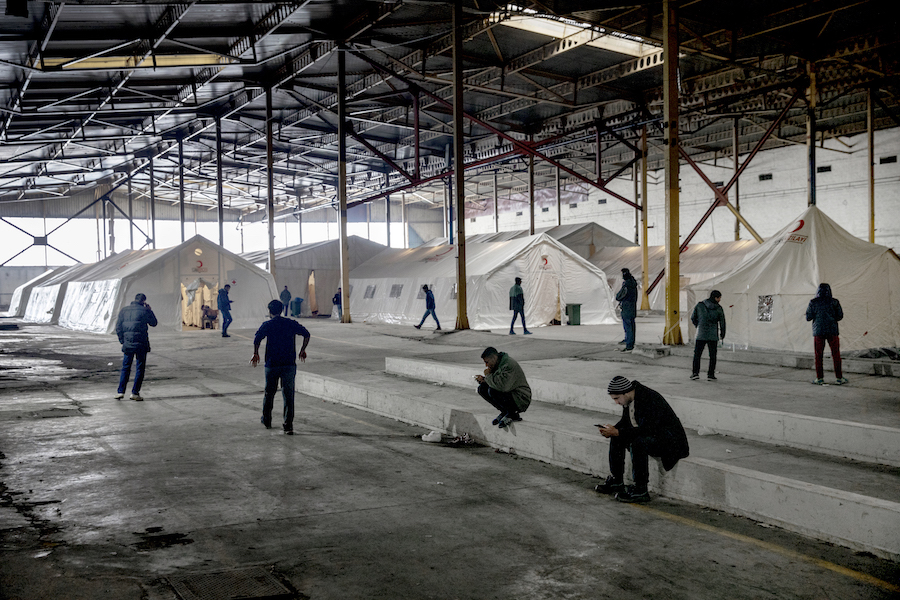 The International Organization for Migration sets up a camp in a former refrigerator factory. At the time, the camp was housing around 2,200 migrants and refugees. 2018 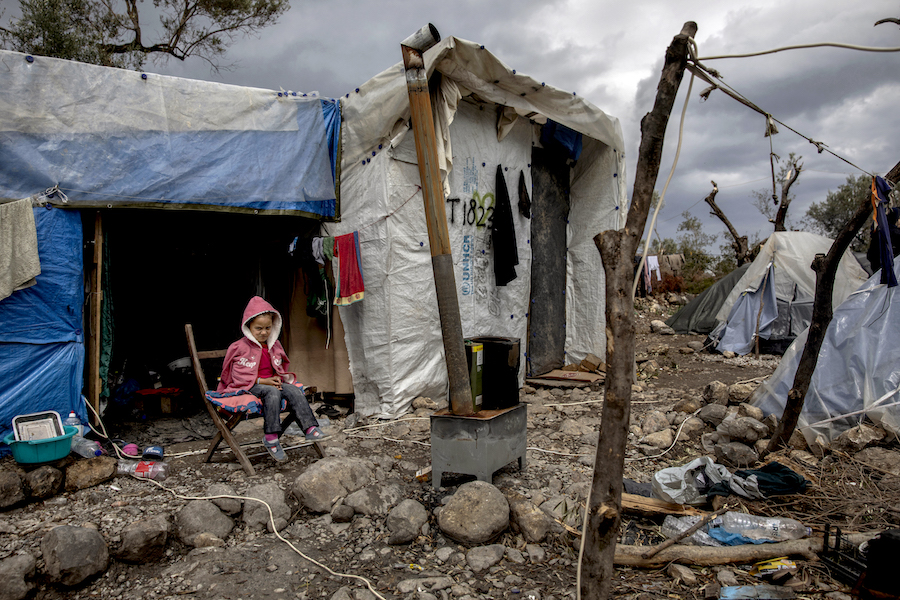 Zaynab Aboud is five years old. She fled with her grandparents from Idlib, a town in Syria that has been devastated by war. Her mother died from a bomb explosion when Zaynab was three months old. Her father has already moved to Turkey, so that is where she and her grandparents are going. They have been living in the Moria camp for five months. March 2020 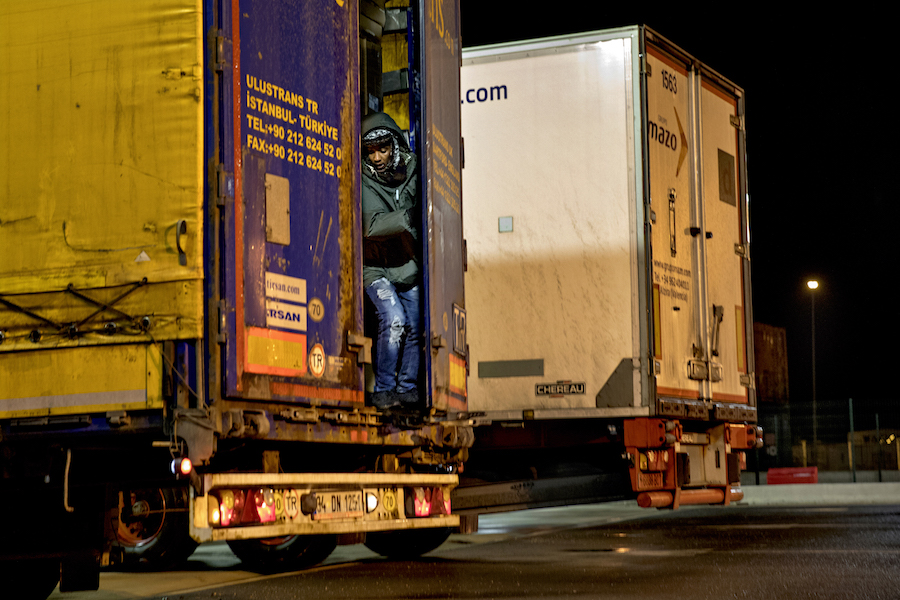 While a truck driver is busy fueling, a group of five boys from Eritrea sneak aboard his truck in a gas station on the outskirts of the French port city Calais. They hope the truck will take them to England via the tunnel under the English Channel or on board one of the many ferries. June 2017 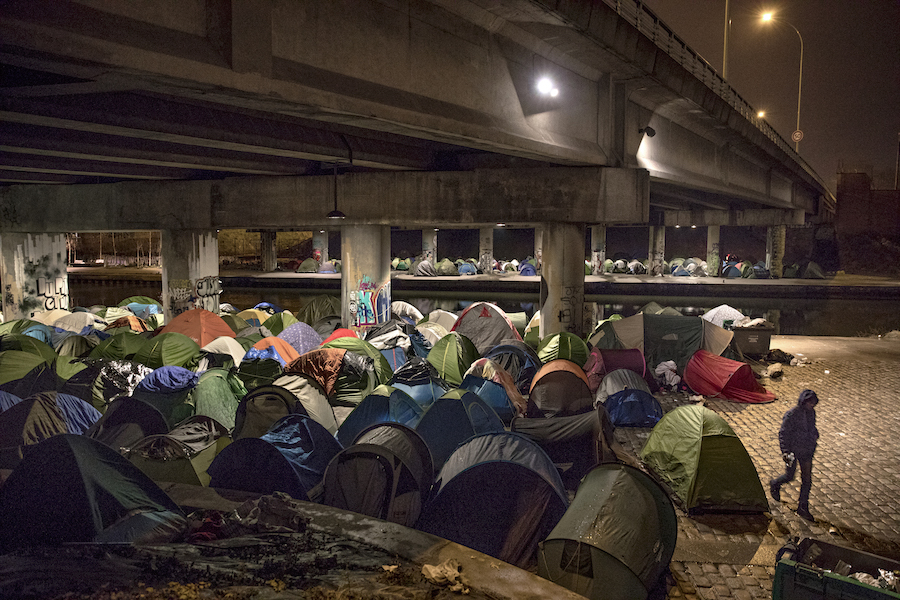 Around 800 refugees and migrants set up camp below a six-lane highway in northern Paris. September 2018

A Dream of Europe is available now on Dewi Lewis.

Linkedin
RELATED ARTICLES
OTHER ARTICLES
With their latest capsule collection, SCRT have constructed their own mythology, based on the story of a fictional meteor shower that hit a small Scottish town.
Photographer Phyllis Christopher recalls capturing sex and protest at a time when the city had become a haven for the queer community.
After news broke last week around an expected reversal of the 1973 landmark law that made abortion legal in the US, protestors gathered in the UK in support of American women.
The group’s leader and cofounder Randy Savvy talks nurturing the next generation of riders and keeping Black cowboy culture alive.
The government’s failure to take long Covid seriously has led to the formation of a group campaigning for the thousands of forgotten victims of the illness.
Shifting the focus from the cost of living crisis to tackling obesity while many starve or freeze is farcical and pointless, writes Fatzine founder Gina Tonic.