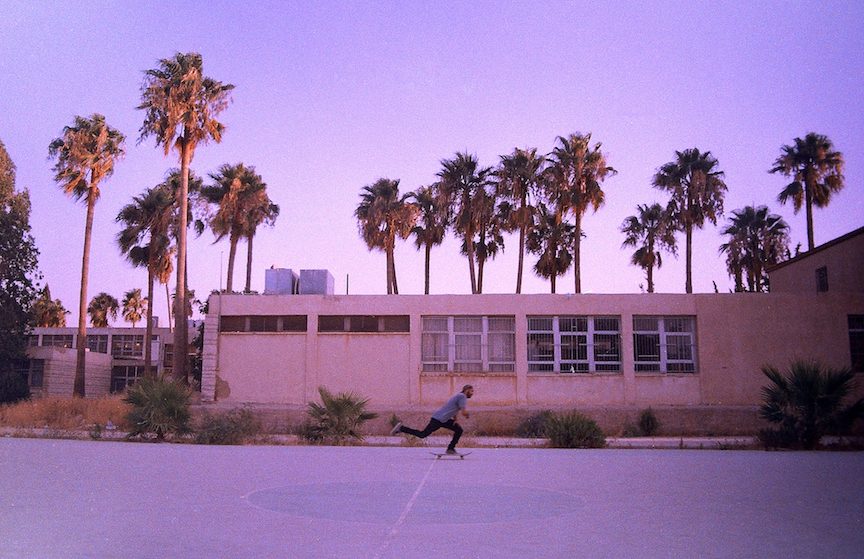 In a city sorely lacking in public space, 7Hills skatepark is transforming the lives of people in Jordan’s capital.

In a city sorely lacking in public space, 7Hills skatepark is transforming the lives of people in Jordan’s capital.

If the 1990s signalled the ‘end of history’ and the beginnings of globalisation, the early 2000s ushered in new opportunities as Western culture and lifestyles permeated into the more wealthy demographics of youth in the Middle East. While skateboarding was famously born from the surf and swell of 1960s California, it wasn’t until the turn of the 21st century that the thrill of skateboarding began to creep into the subcultures of disaffected youth in Jordan.

Skateboarding – a largely Americanised past-time – was emerging in Jordan during a time when the United States’s War on Terror left much of the world rejecting such cultural-based soft power. Simultaneously, American expansionism and associated war crimes propelled a mass migration of people into Jordan as a country of refuge, exacerbating inequalities and highlighting the need for free-to-use public spaces to serve an expanding population. That same year in 2001, Iain Borden published his seminal book Skateboarding, Space and the City, detailing the unique relationship skateboarders have in opening up public spaces within wider patterns of inequality. 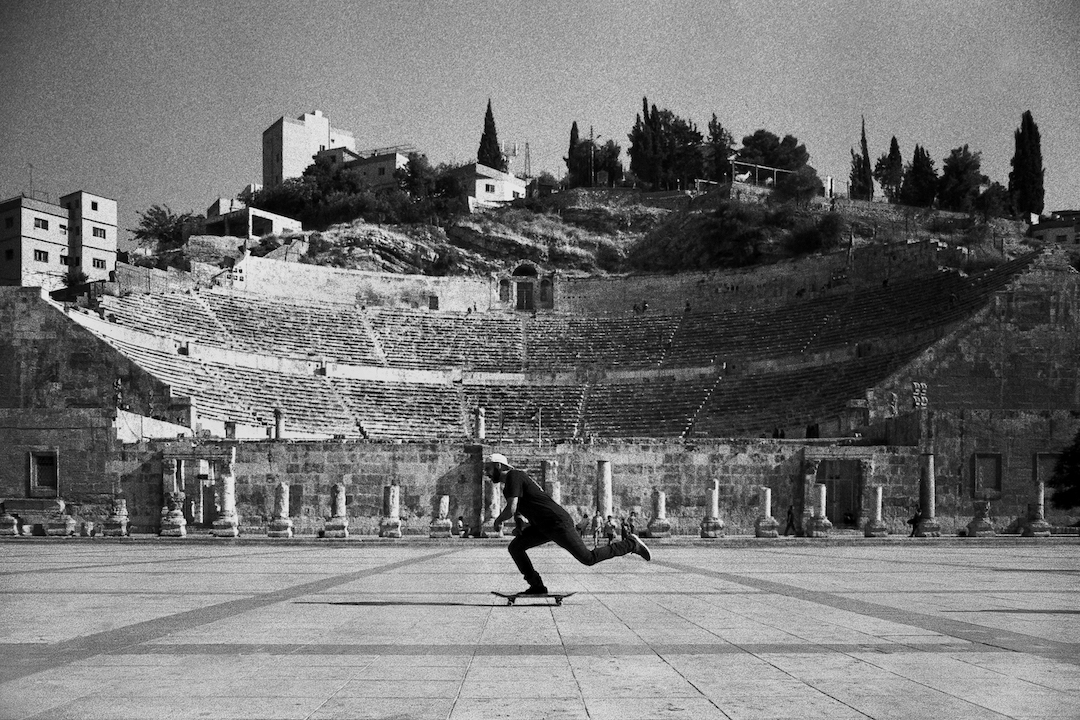 With skateboarding unfolding in Jordan in the context of globalisation and demographic change, policy-makers and city planners were failing to truly create spaces that were public. High-end malls and hard-to-reach parks did not serve Amman’s poor population, including communities who were in Amman escaping regional conflict (Jordan is the among the top ten countries in terms of number of refugees hosted, which is huge considering how poor the country is). At this point in Jordan, both skateboarding and public spaces were largely reserved for a wealthy minority. 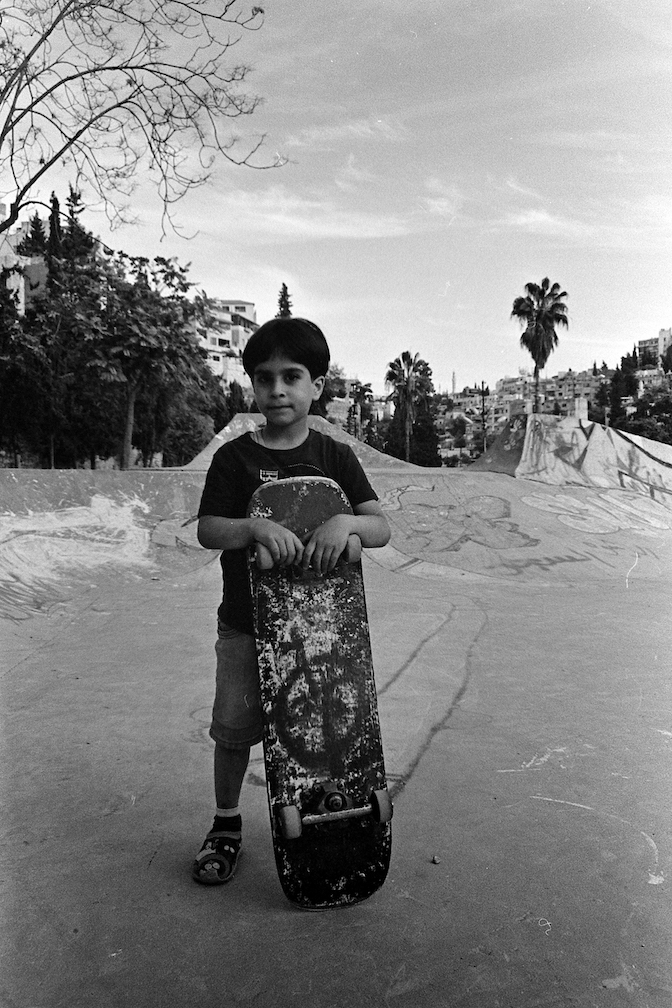 There was not only a lack of skateboards, but also a lack of skateparks. As Philadelphia Skateboards started gaining regional and international recognition, Make Life Skate Life – an NGO that builds skateparks in underserved communities – got in touch with Mohammed in 2014. “Make Life Skate Life thought it would be cool to bring skateboarding to more kids in Jordan,” Mohammed recalls. “Myself and Make Life Skate Life started meeting municipal government, thinking about a name for the skatepark, and debating the idea of doing an online fundraising campaign instead of going to corporate donors.”

In the end, 7Hills was settled on, a reference to the seven hills that make up Amman. The skatepark was co-constructed in 2014 between Jordanian skateboarders and international volunteers from Make Life Skate Life. During the three-week build, an international team of professional skatepark builders worked with local youth to teach them about concrete skatepark construction, the goal being to develop more public spaces and reactivate more unused areas in the city through skateboarding. 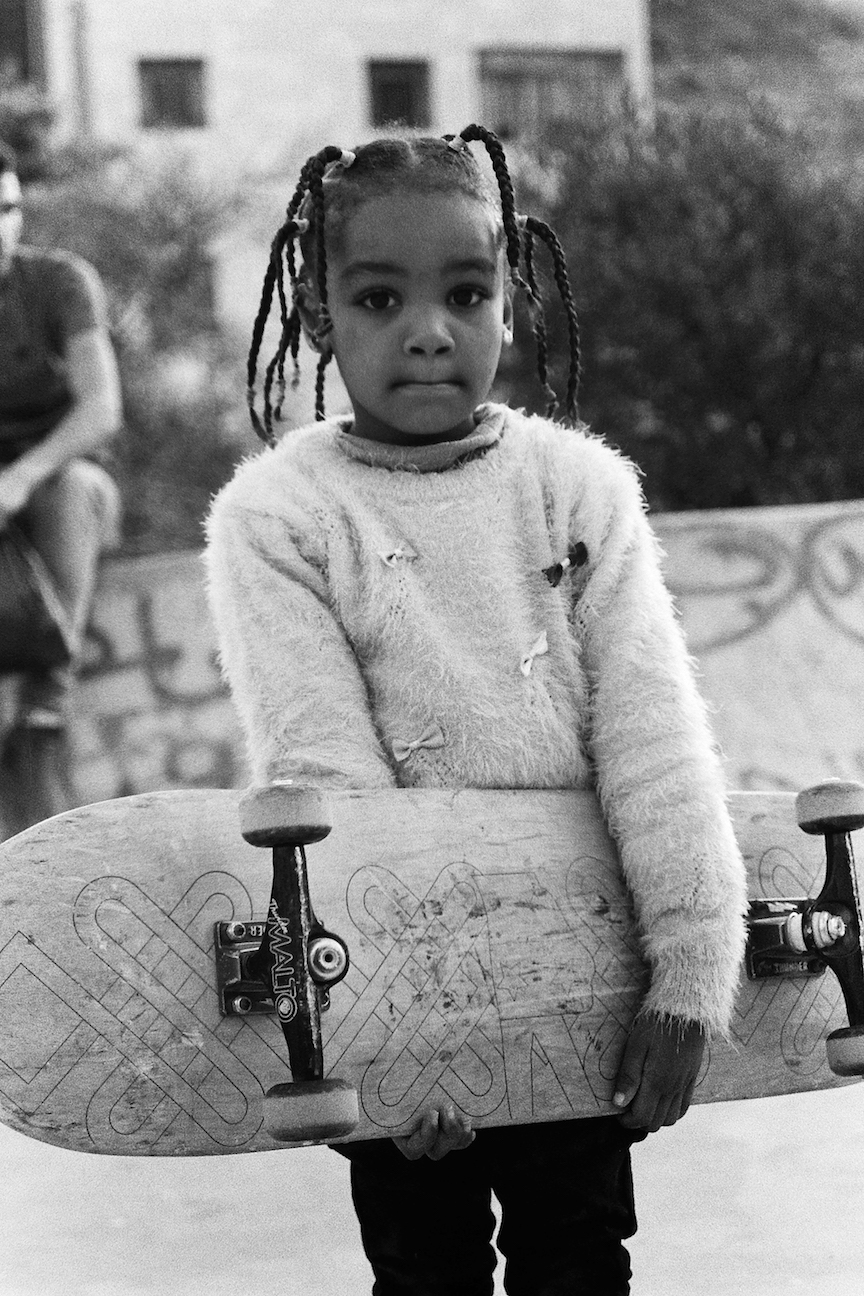 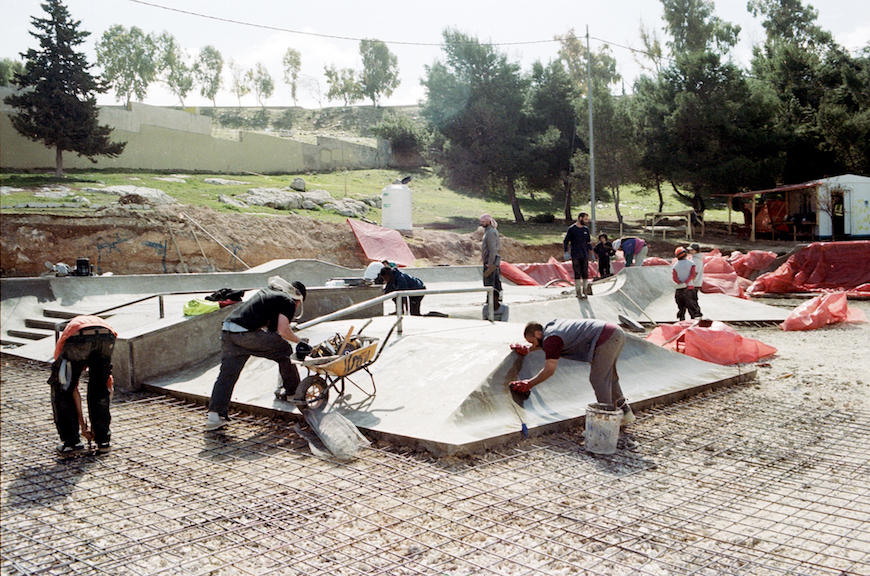 This grassroots approach embedded within the Jordanian skateboarding scene presents potential for the future of public space in Amman. As Mohammad explains, “Decentralising parks and giving autonomy to the people who are going to use it is a more inclusive way to create cities and public parks.”

Skateboarding NGOs have been growing over recent years – both regionally and internationally. There’s SkatePal, Skateistan and Concrete Jungle Foundation, to name a few operating in MENA. But 7Hills – now a skatepark and registered NGO – is unique in being both locally run and offering programming that expands beyond just skate lessons. These include artistic-based workshops from painting to screen printing, as well as more vocational skills, such as wood carpentry. 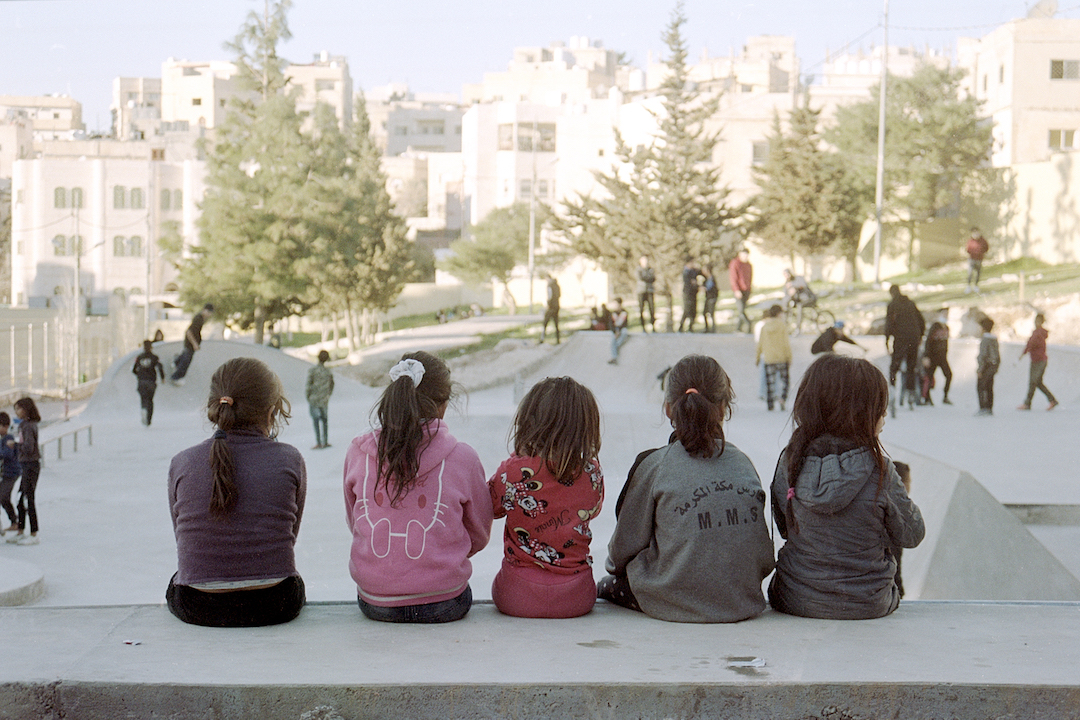 In 2016, Kas Wauters – who was interning at the skatepark at the time – worked with Mohammed to turn 7Hills into a community-hub for marginalised youth and those most affected by demographic change in Amman. “After four months, we managed to start a few classes; the Sudanese Class was started back then and the Girls Only Class too,” explains Kas.

“Sudanese families told us how their kids were getting bullied out of school and how they were scared to be in public because of the racism [they face],” says Kas. There are around 3,000 UNHCR-registered Sudanese refugees in Jordan, and the racism they endure is well-documented. “We wanted to prevent a public space where families can relax and just feel welcome. The park has become a space for the entire Sudanese community in Amman. The parents come out when the kids skate to have picnics and it has also become a place for them to interact with Jordanian families.” 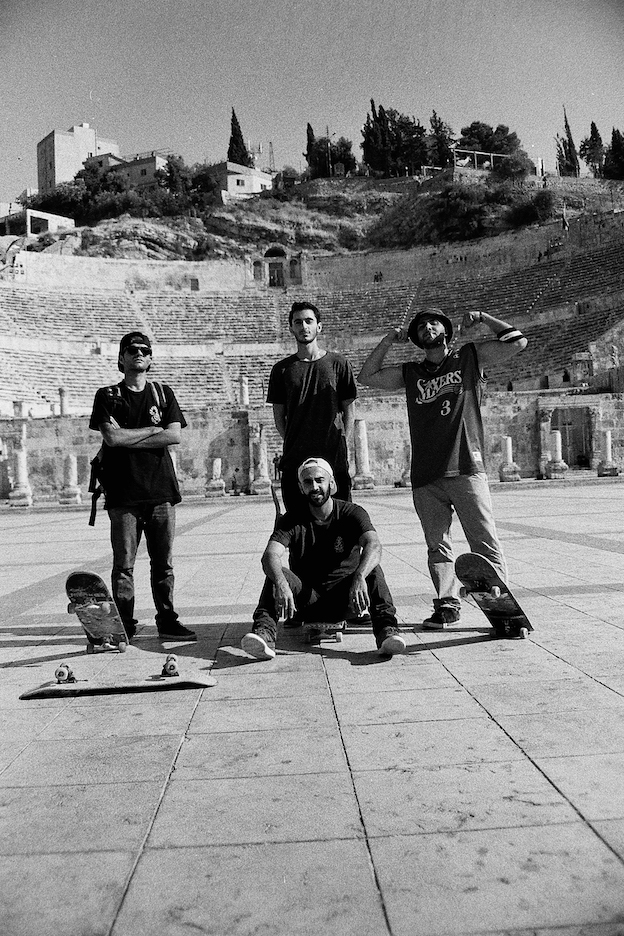 For displaced people living in Jordan, the skatepark has become a vital space for escape and connection. “The skatepark is a place where we go play, hang out and enjoy ourselves with friends,” says Mahmoud Mejdi Hamid-Yunus, a refugee from Gaza at Jerash Camp. “The camp is not a good place to play, it’s dirty and there is no one to play with. I wish there was a place like that at the camp where we could play too”

With elite skateboarding grabbing the world’s attention during the 2021 Tokyo Olympics, it’s easy to lose sight of the fact that it is more than a competitive sport. In Jordan, it provides a platform for young people to play within a city that often excludes them, and more recently, to support creativity in myriad forms.

“Skateboarding isn’t just a sport, it’s a culture,” says Mohammad. “We want the skatepark to be a public space where the youth can experiment through all mediums. The opportunities are endless.” 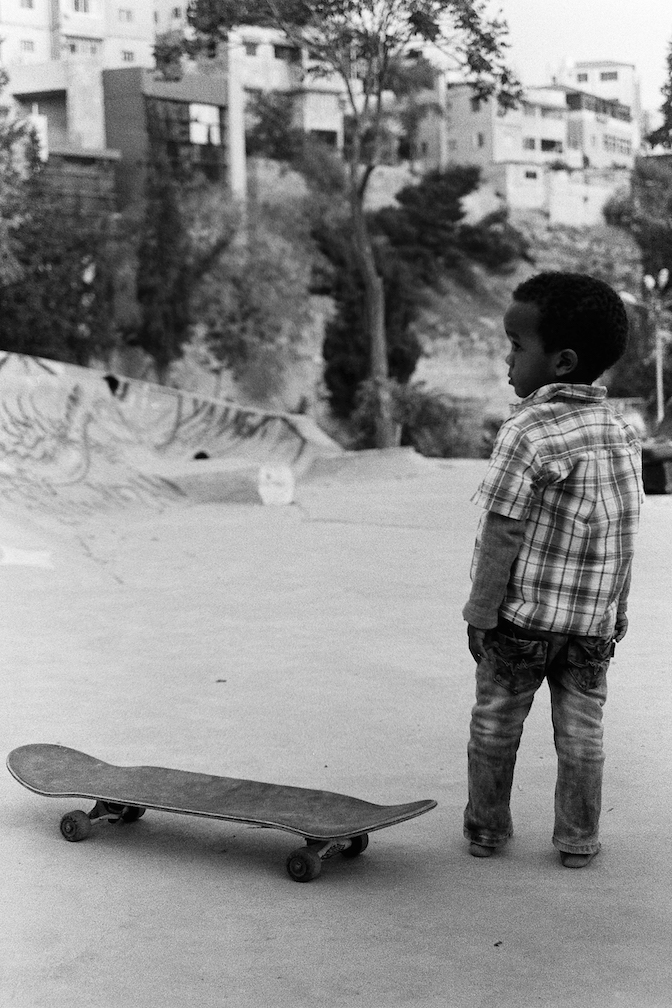 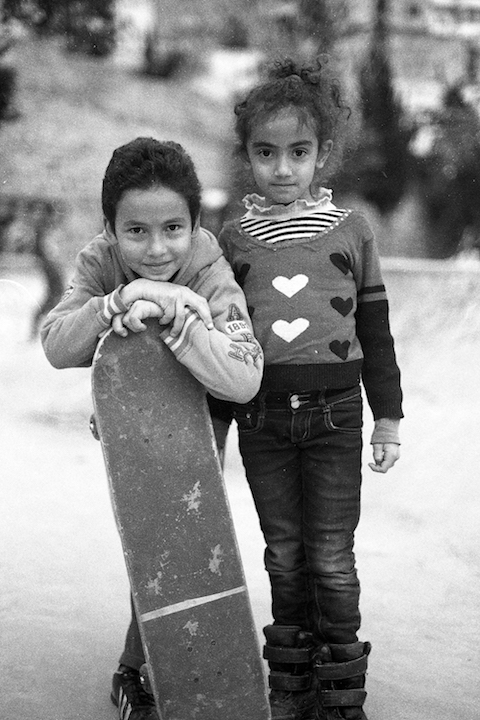 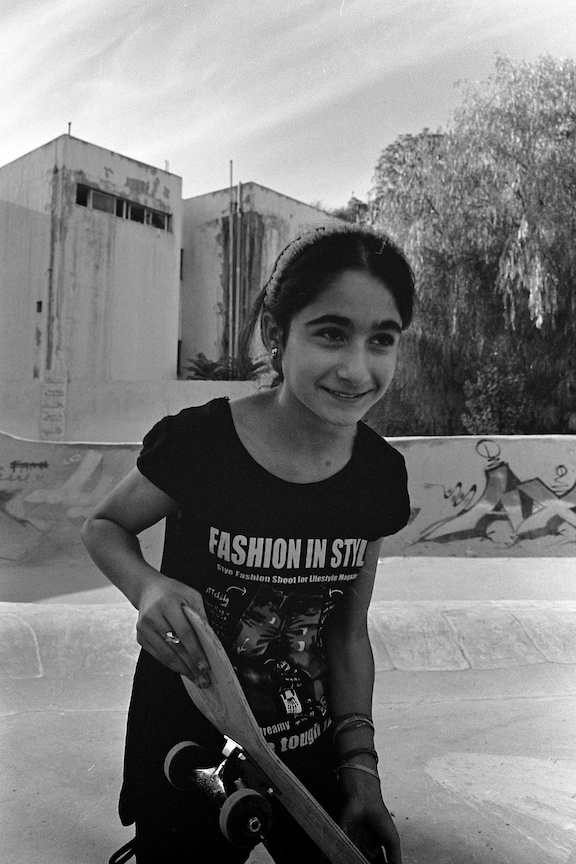 Linkedin
RELATED ARTICLES
OTHER ARTICLES
Ireland’s national sports are modernising. At the forefront of this movement is Na Gaeil Aeracha, the country’s first ever queer GAA club.
Layna, Maysa and Amaya are three siblings looking to disrupt narratives around the sport. In doing so, they’re hoping to inspire a new generation of skateboarders.
Photographer Nico Froehlich’s series documents South London’s diverse communities, while also reflecting on their fragility amid rapid gentrification.
A campaign seeking to prevent future injustices where there is state involvement is gaining momentum, with Labour recently pledging its support.
Volunteer-run online spaces are combatting the rise in incel extremism by offering an alternative for men to find healthy community.
Alternating between colour and black-and-white, the photographer chronicled sexual liberation, economic crises and the repercussions of the war in Vietnam.