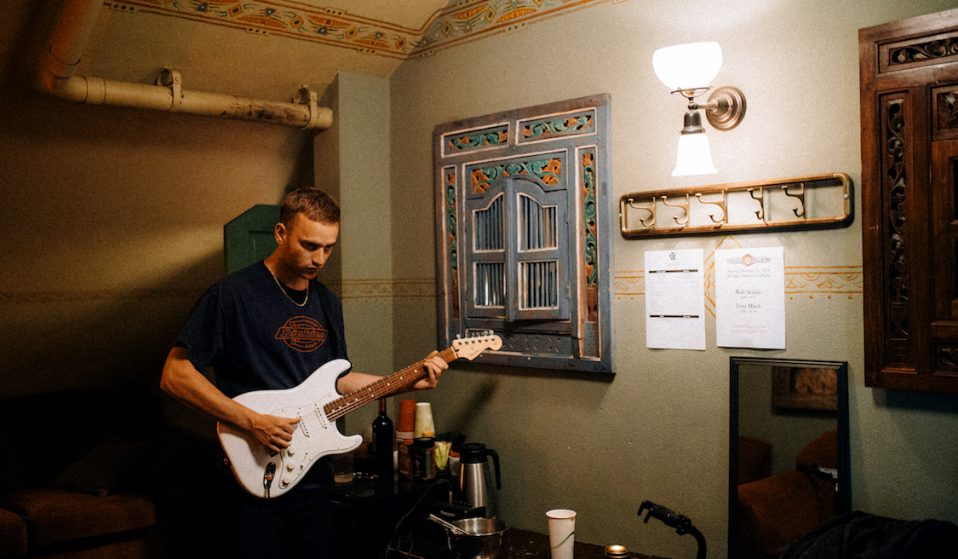 The 26-year-old has made a name for himself as part of South London’s young Jazz scene. Now, he’s gearing up to enter into a whole new genre.

The 26-year-old singer-songwriter-guitarist has made a name for himself as part of South London’s pioneering young Jazz scene. Now, he’s gearing up to enter into a whole new genre.

It’s ten in the morning and the kettle is whirring in the background. Tom Misch is making his second coffee. It’s a French press with some milk and sugar; he’s just rolled out of bed. Later, he’s going to see a man about painting the kitchen cupboards at his home in South East London, which he bought about a year ago. “See that pink I’ve slapped on there?” he says. “Yeah, it’s the wrong paint for the units, they’re a special material so I need to see someone about re-doing them. They won’t be pink anymore, though.”

We’re not here to chat DIY, though. Misch has some news, which he reveals to me within the first couple of minutes of our conversation. “I’ve started this new project which will have an alter ego – it’s electronic dance music. It doesn’t exist yet, so the world doesn’t know about it. But I’m gonna announce it soon,” he says, smiling. Misch, the 26-year-old singer-songwriter-guitarist hailing from South London’s young Jazz scene, is gearing up to announce the news that he’ll be releasing house music under a new alias.

The project wasn’t planned, as such. Off the back of the 2020 album, What Kinda Music, which he released with drummer and producer Yussef Dayes on legendary jazz label Blue Note last year, Misch had been working on a follow-up album. But he quickly realised he needed a break. He stopped working on it and started pursuing hobbies and projects away from making music, even pushing back the release date. “My manager was alright with it,” he says.

Since dropping out of Trinity Laban Conservatoire of Music and Dance on account of his career popping off, it’s been non-stop for Misch. So he took some time off. During that break, he started getting into hobbies and other ‘normal’ life activities that previously, he’d not found the time to do – like learning to cook properly.

“I signed up to this charity called FoodCycle. Yesterday, I went to East Ham and cooked for homeless people,” he says, citing this as the reason why he’s on a second coffee. “It’s quite tiring but I thought I’d do this because I want to get out of the studio, and I’ll learn to cook, hopefully.” His other hobbies include surfing and running: he runs with a community running club, but doesn’t get to surf often. “Outdoors stuff contrasts with what I spend all my time doing, I guess that’s why I enjoy it. As for surfing, I really like being in water.”

Back to the new music. That came during the break, too. Never one to keep idle, he released a set of guitar covers called Quarantine Sessions, pretty off-the-cuff, during lockdown. They started out as covers he was doing in the garden during the few warm days in the Summer, which he’d upload to Instagram. Given the positive response and his production capabilities, he figured they might as well become a record.

During his time away from making records, Misch also started playing around with the music he unwinds to – house music. He does it less these days, but Misch loves clubbing. Given this and his penchant for beat making, it was only a matter of time before the loose experimentation became a fully-fledged project. Not long into exploring this new, heavily-electronic, Chicago and French house-inspired sound, he made a rule: no guitar. “To make sure it keeps out of the ‘Tom Misch’ sound palette,” he explains, in reference to the soulful Jazz and light, laid-back melodic riffs that have come to define his output up until now.

Jumping into an entirely new genre didn’t come too easily. Not just because he didn’t have a guitar to hand, but because of the expectations around him. “There’s always pressure to keep releasing similar albums, because that’s what people know they like, and it’s what the team benefits most from,” Misch says. But ultimately, he reflects, he has to do the stuff he wants to do. And this new project has really captured his imagination.

We spend a good fifteen minutes talking about the synthesisers he’s using, his influences (which include Floating Points, Moodymann, and just about everything 1990s Chicago House, along with a lot of Daft Punk, “dusty drum samples” and disco) and his love of attending DJ sets at festivals. He’s hoping to do a load of them next summer. “The good thing about DJing is I can really let loose and it’s just an excuse to enjoy the festival,” he says. “Just need to make sure I don’t lose the USB stick.”

There are, however, worries that play on Misch’s mind: without playing guitar as much anymore, he wonders if he’ll “become shit at it”. But this hasn’t dampened his enthusiasm: “It’s a very exciting project for me because it’s something new. The last 10 years have been ‘Tom Misch’, and now I’ve got something fresh,” he says. 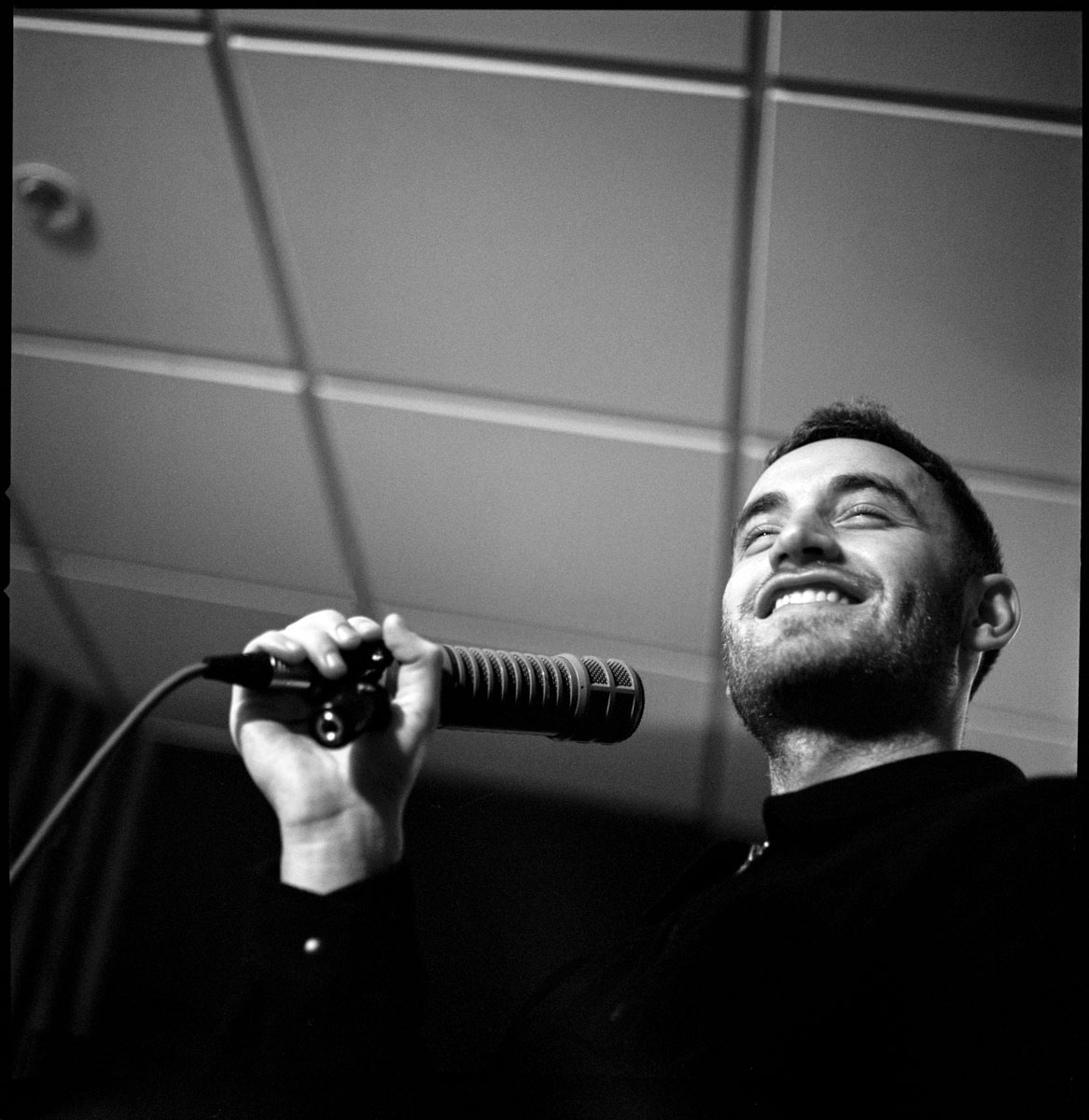 He’s also preoccupied with his music being “credible”, while having commercial viability, too. In this realm, he looks up to Anderson .Paak. “Malibu [Anderson .Paak’s second album] achieved that better than anything I can think of. If I can make a really credible album that lots of people like, I’ll be buzzing. That’s always the aim.” On the new project, he happens to be working with former Anderson .Paak collaborator Simone Cihlar for the visuals. They’ve settled on a comic book-meets-disco feel at the moment.

For the new record, alongside an absence in guitar playing, Misch says he’s going to try and avoid singing on tracks, partly to keep the sound fresh. “I like the idea of doing some more old school production, a bit like Mark Ronson does,” he says. And also because, as he puts it: “If a song does really well, and I’m playing a ‘Tom Misch’ show and people are shouting out ‘play a [alter ego name] tune’. I don’t want to have to do that.”

The alter ego name is meant to be a secret, but it slips out on average every fifteen minutes during the interview. Misch is clearly excited to launch his new sound into the world. We won’t spoil the surprise. He’ll reveal it on his socials soon enough: “It’s full of stuff I’d like from a DJ set at a festival, not that it means others will like it.” And he’s confirmed there’ll be ‘Tom Misch’ records in due course too, along with other plans (he’s been dabbling with writing scores for films for years, and mentions them as still being on the backburner). He’s a busy man, Tom Misch.

Linkedin
RELATED ARTICLES
OTHER ARTICLES
From the Yakuza to a biker gang, Bruce Gilden recounts capturing Tokyo and Osaka in the ‘90s.
The situation in Afghanistan remains dire, with many groups facing persecution at the hands of the Taliban.
Our new magazine is here, starring the inimitable Mitski. Order your copy now and join us on a trip around the world.
Shifting the focus from the cost of living crisis to tackling obesity while many starve or freeze is farcical and pointless, writes Fatzine founder Gina Tonic.
Over the weekend, London locals came together to resist a pre-planned police raid targeting delivery drivers.
Following the release of his latest album God Don’t Make Mistakes, the rapper talks horror villains, police brutality and being unafraid to show his vulnerable side.