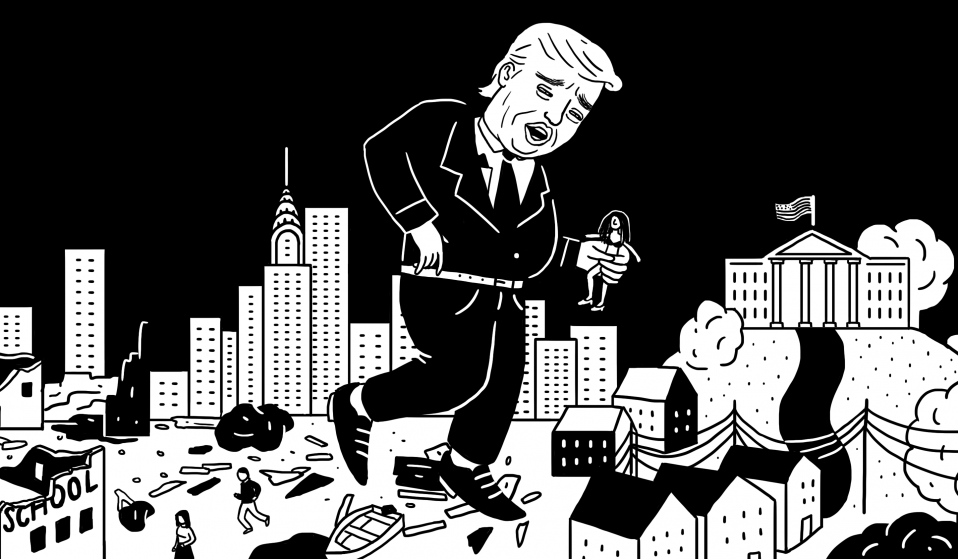 As Donald Trump upends the world in the greatest political upset for generations, Japanese-American writer Tetsuhiko Endo reflects on what the future holds for anyone fighting on the fringes

What happens when the arc of history no longer bends towards justice? As Donald Trump upends the world in the greatest political upset for generations, Japanese-American writer Tetsuhiko Endo reflects on what the future holds for anyone fighting on the fringes.

I woke up today in Dublin, Ireland, at 4:30am and couldn’t go back to sleep. My 9-week-old son – Irish, American and Japanese – slept quietly, peacefully even. The polls were swinging towards Trump and I got up and watched them go.

I have almost drowned three times in my life, and this felt similar to all of them; anger and resentment, an overpowering will to resist, followed by the desolation of being buried by a force so strong it doesn’t even notice that it’s squeezing the life from you. The only thing missing was the peace that comes right before you succumb. But no, I am still here. My son slumbers in the next room unaware that I have brought him into a world that doesn’t want him and cannot bear the very fact of his existence.

The last 70 years in the Western world have been a struggle, in fits and starts, for the wretched of the earth to reclaim the birthright stolen from them by sexism, slavery, colonialism, the holocaust, the atomic bomb, Jim Crowe, and predatory globalisation. The counter-narrative has been the decline of white male hegemony from the salons of Paris, to the boys clubs of London and the boardrooms of New York. But those white men would not fall without a fight, and today they have struck us the blow that we never saw coming. We struck their head off and they bit us anyway.

One day has seen 70 years of intermittent progress turned back. And let it never be said that this election was stolen or that America didn’t deserve it. The problem with democracy is that it tends to ask a lot of its adherents. Today we are seeing the will of the majority of the people in the most powerful nation that has ever existed. That will states unequivocally that, if you are anything but a white Christian man you had better get ready to bow down and serve your masters.

Black Americans, the global vanguard of the last 100 years, have known this since they fought their way out of chains only to find that the people who had so honourably “freed” them, only did so to put them in another sort of prison. Their suffering has always been clear to the rest of us – the whores, the chinks, the spics, the micks, the gooks, the wops, the fags, the dykes, and every other assorted flavour of chewed up and downtrodden – but we didn’t do enough to help. Instead, we let the negroes take it on the head – indeed we piled on in the hope that our masters would love us more – until we woke up this morning and found, overnight, that we had all been turned into that which we most fear: Niggers.

I have been told up and down – by academics and friends, news articles, pundits, and people of good breeding – that I have no right to that word. But I can think of no other term to describe my position – and the position of my son, and the position of my brother, and my immigrant loving mother, and my Japanese father, and every other unfortunate who dares to live in the country where I was born and raised and be anything less than “white”.

The country that, 10 years before my birth had outlawed the very existence of mixed race children like myself, and 30 years after once again has no place for immigrants, blacks, Jews, ad infitum. I am a nigger, no matter my skin colour. Hillary Clinton is a whore, and everyone who this election had threatened with destruction is some variated shade of either term. The saddest part is that we always were, in the eyes of most of our countrymen, and it has only just now become apparent to us, one day too late.

When James Baldwin wrote to his 15-year-old nephew in 1963, he counciled hope and understanding. He found words to help a young black man comprehend the world he had been born into:

“The really terrible thing, old buddy, is that you must accept them, and I mean that very seriously,” he wrote. “You must accept them and accept them with love, for these innocent people have no other hope. They are in effect still trapped in a history which they do not understand and until they understand it, they cannot be released from it… these men are your brothers, your lost younger brothers, and if the word ‘integration’ means anything, this is what it means, that we with love shall force our brothers to see themselves as they are, to cease fleeing from reality and begin to change it, for this is your home, my friend.”

My heart is not as expansive as that of brother James. My intellect is not as fierce as those of the black intellectuals that have shone us what bare and faltering light we have briefly enjoyed in this dark century. I cannot council hope and understanding. When I look at my country today I see countrymen who have been shown their history and forced to understand it and who, instead of dropping down and begging for reconciliation, have embraced their legacy of hate and degeneracy with open arms. Who, instead of moving forward, have turned back and will not stop turning until either the rest of us are destroyed either spiritually or physically; or we destroy them first.

This is not solely an American conflict. The Britain of Brexit, the Europe of Marine Le Pen and Geert Veelders, of the Paris Banlieu and Italian beaches filled with drowned African bodies, has, for once, beaten us to the punch. After all these years of struggle, of clawing forward inch by inch, the tide has turned and all us niggers are being cut loose from this cozy Western country club, sent back to where we came from and put back into our places. My son sleeps and I wonder how to tell him that we are refugees no matter where we go, that Europe doesn’t want him and wants his father even less. That America will not take him in.

If any good can still be salvaged from this day it will be to clearly draw the battle lines, to reveal the hollowness of the long-standing pretence that we are all in this together. Today each and every person is etched into one side or the other in the great struggle of our age: the terror of white men against everyone else. What a terrible thing to write – for it assures the destruction of us all – but what the nigger has long known, or understood on a level beyond knowing, is that we are all “licked before we begin” and that the only thing left for us, the forsaken preterition of this century of progress, is to “begin anyway and see it through no matter what.”

The fight is upon us. It crept up when we were busy patting ourselves on the back and last night it kicked in our door and dragged us out into the cold. The only choice left now to people of conscience is whether to meet our doom quietly, down on our knees begging for pity from men who have never spared an ounce of it for anyone but themselves, or to stand up and reach for their fucking throats.

Tetsuhiko Endo writes about race and the death of the American dream. He has a masters degree in Postcolonial Studies from the School of Oriental and African Studies but didn’t have the chops to get a PhD.

Linkedin
RELATED ARTICLES
OTHER ARTICLES
A recent High Court ruling against the right to wild camp in Dartmoor National Park sparked the largest land protest in history – and campaigners say their fight is not over yet.
Photographer Sean Maung reflects on documenting a small town in Pennsylvania afflicted by high levels of unemployment, poverty, violence, crime, and addiction.
A new law change is enabling Britain’s donor-conceived children to know the truth about their origins – but campaigners say the fertility industry must do more to protect people.
Activists and campaigners are fighting back against new laws that would seriously undermine the ability to take industrial action, calling it an attack on fundamental workers' rights.
A new film from Berghaus traces the story of Adam Raja, who left behind a turbulent upbringing to discover the healing power of climbing.
Social prescribing connects people with non-medical support to improve their health and wellbeing – but some experts worry it’s just a stick plaster solution.