Art & Culture / VC London: the all-women bike crew on the secrets to longevity 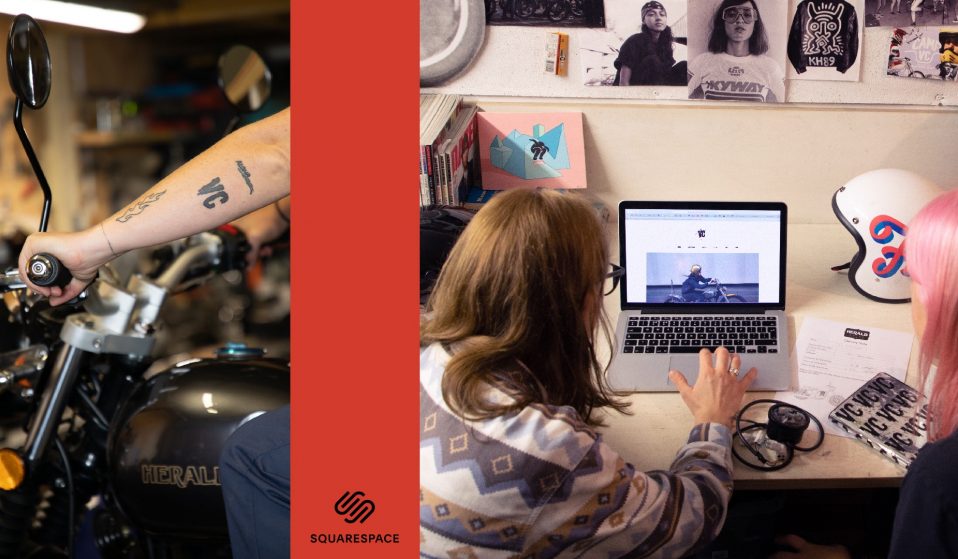 In the first instalment of a new editorial series, motorbike crew VC London explain how they’ve always got one eye on the horizon.

Future Proof is a new editorial series, produced in partnership with Squarespace, which explores how creators have been building their communities and continuing to connect in new ways using their online presence. In the first instalment, motorbike crew VC London explains how they’ve always got one eye on the horizon.

London’s Limehouse is generations deep in creative industry. A hundred years ago, this was a red light district servicing the raging energies of the riverside. Now the neighbourhood is home to hustlers and doers adapting to the 21st century’s shifting sands. The corner where all-women bike collective VC London have their workshop is front and centre of this new energy.

Gemma Harrison – pink haired, sardonic, northern –  is at the centre of the VC London maelstrom. She encapsulates the dynamic need to keep paddling against the flow despite it all. For her, it’s a pretty simple formula. “You need a bunch of great people, a passion that brings them together, and a way of communicating that passion that draws people to you,” she says. “If you have these things, you can survive anything.”

Gemma and the rest of the ever-expanding VC London family base themselves at this thriving HQ. The ethos crystallises here, their identity forged through regular ride-outs and meet-ups: sessions where they share knowledge and talk story, as well as plan for the expansion of the VC project. But it’s the simple love of riding that keeps things burning, and is taking them – via their Squarespace website – to reach greater heights than ever. “Motorcycles have drawn all these amazing people together,” Gemma explains, “but without a way of communicating with one another, you have little in the way of a lasting legacy.” 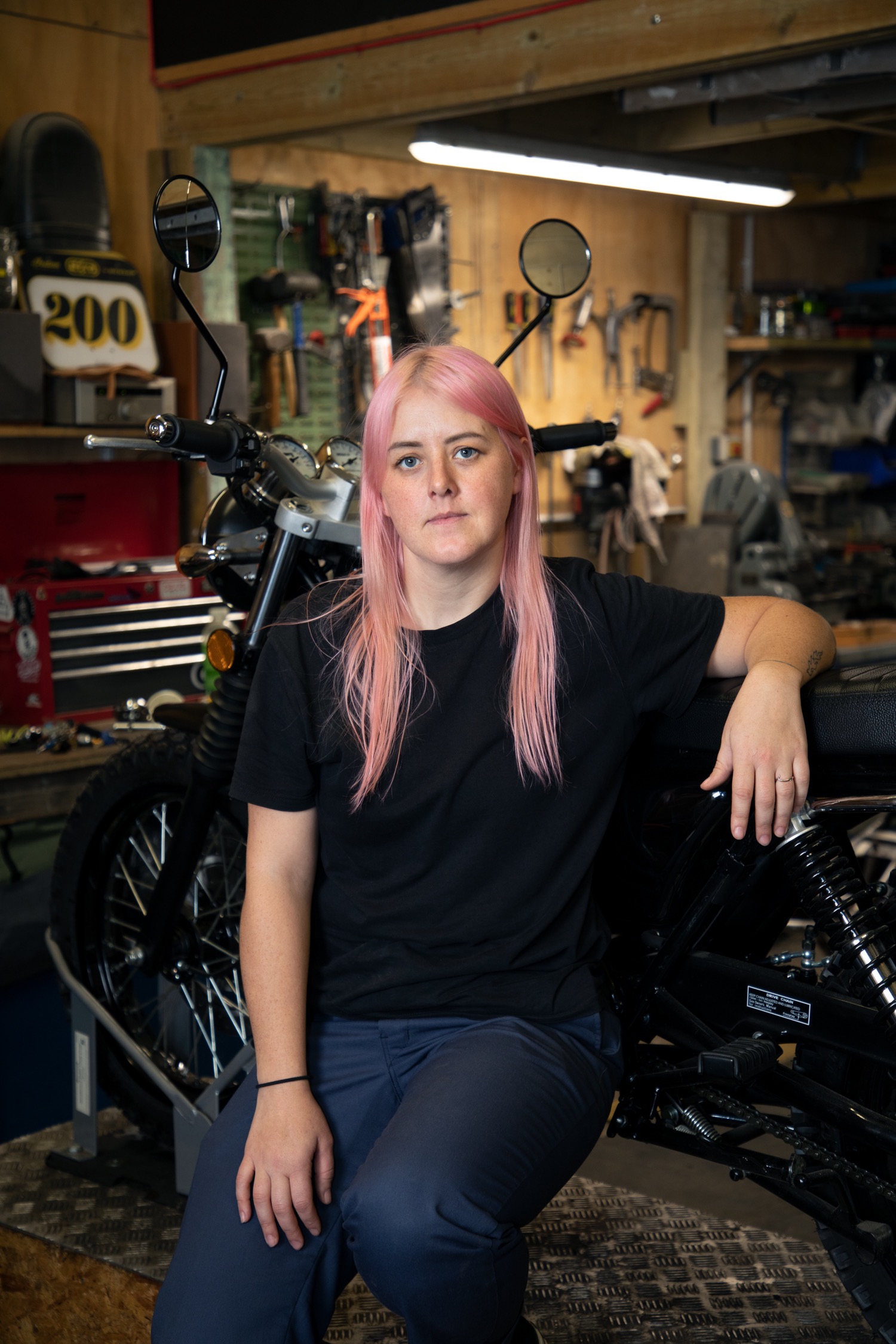 VC London began when Gemma met uber-stylish, bobber-riding Namin Cho through work in the London fashion trade. On a ride one day, they bumped into Mai Storni – who is tall and fair, with an ethereal nature earthed by Gemma and Namin. The latter recently moved to Milan to take a job in fashion, so can’t be with the crew at today’s meet-up. “Namin is missing us, of course,” says Mai, wistfully caressing the tank of Namin’s ‘Black Cat Bobber’, which remains locked down in the workshop. “But she’s missing the machine badly too…”

As they began riding together, back in 2014, the three friends would document and share stories from ride-outs and bike-themed events. Soon there were collaborations with skateboarder contemporaries, along with events with friends’ rock bands and the brands that supported them. “It was just a natural progression from sharing stuff on social media to building our first Squarespace website in 2015,” Mai says. “it enabled us to draw everything together and to really start building a community through what we do – like keep the community up to speed with meet-ups, ride-outs and other events – as well as entertained with bits of colourful writing…” 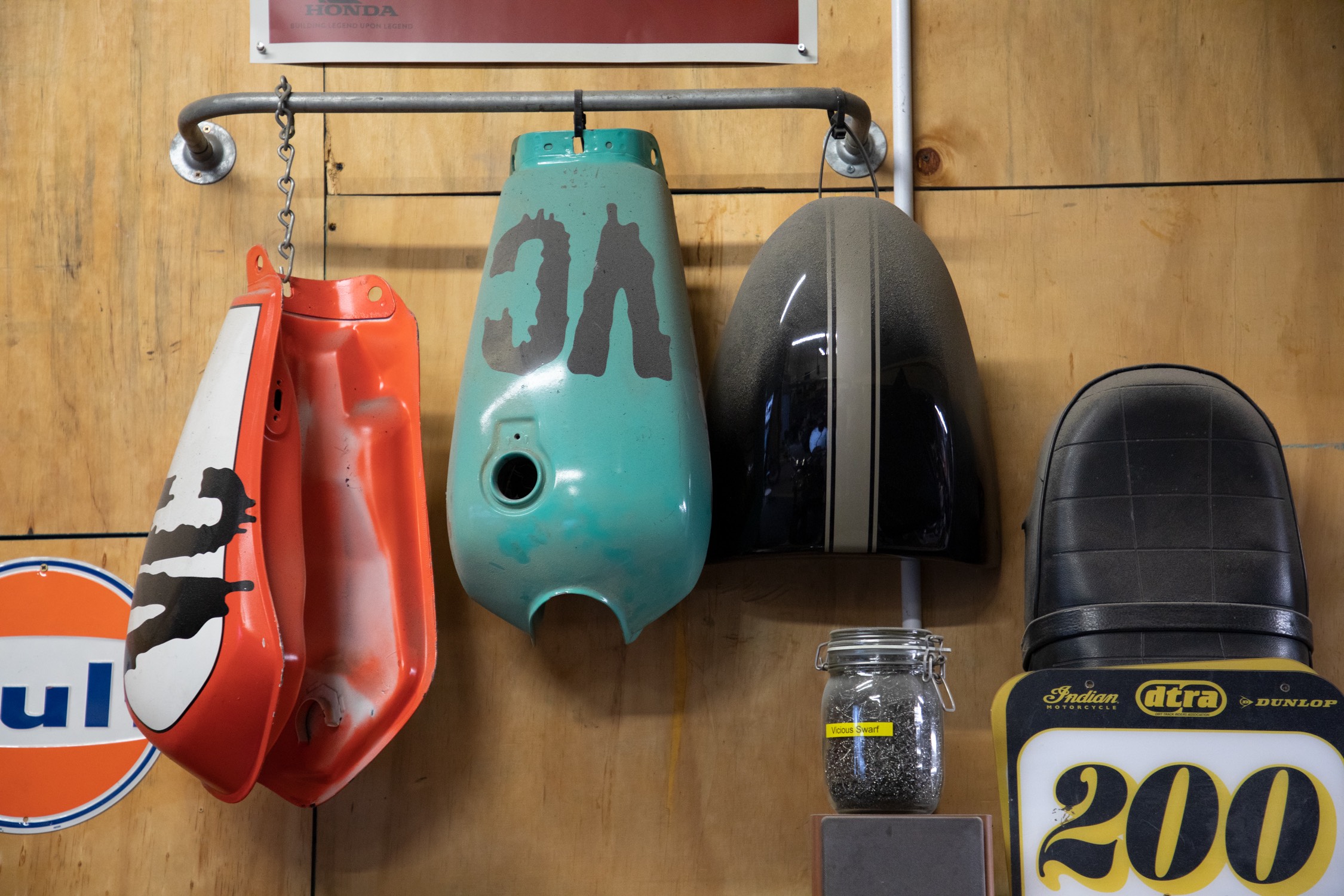 If you had to characterise the connective VC tissue it would be simply that these are a bunch of women who take little notice of what people think of them and are determined to define themselves for themselves. “There is something random but tangible about the things that drew us together,” Mai  continues. “Sure, motorbikes and the love of riding are at the centre of things, but the machines themselves are just the catalyst for our community. There is a whole new generation of amazing women we’re working with these days – most of them ride motorbikes but many don’t. They are just stoked to be part of something fun, empowering – and a little bit irreverent.”  Today, with the crew gathered, it’s that piss-taking honesty that is front and centre. As one crew member wrestles with motorbike to get it up on a ramp, another points out that you wouldn’t believe “we were fifty per cent gay here”.

“Isn’t everyone 50 per cent gay, everywhere. And isn’t it more like 30%?” someone responds. The crew dissolves in laughter, and the bike eventually makes it way onto the stand, ready to be fettled. 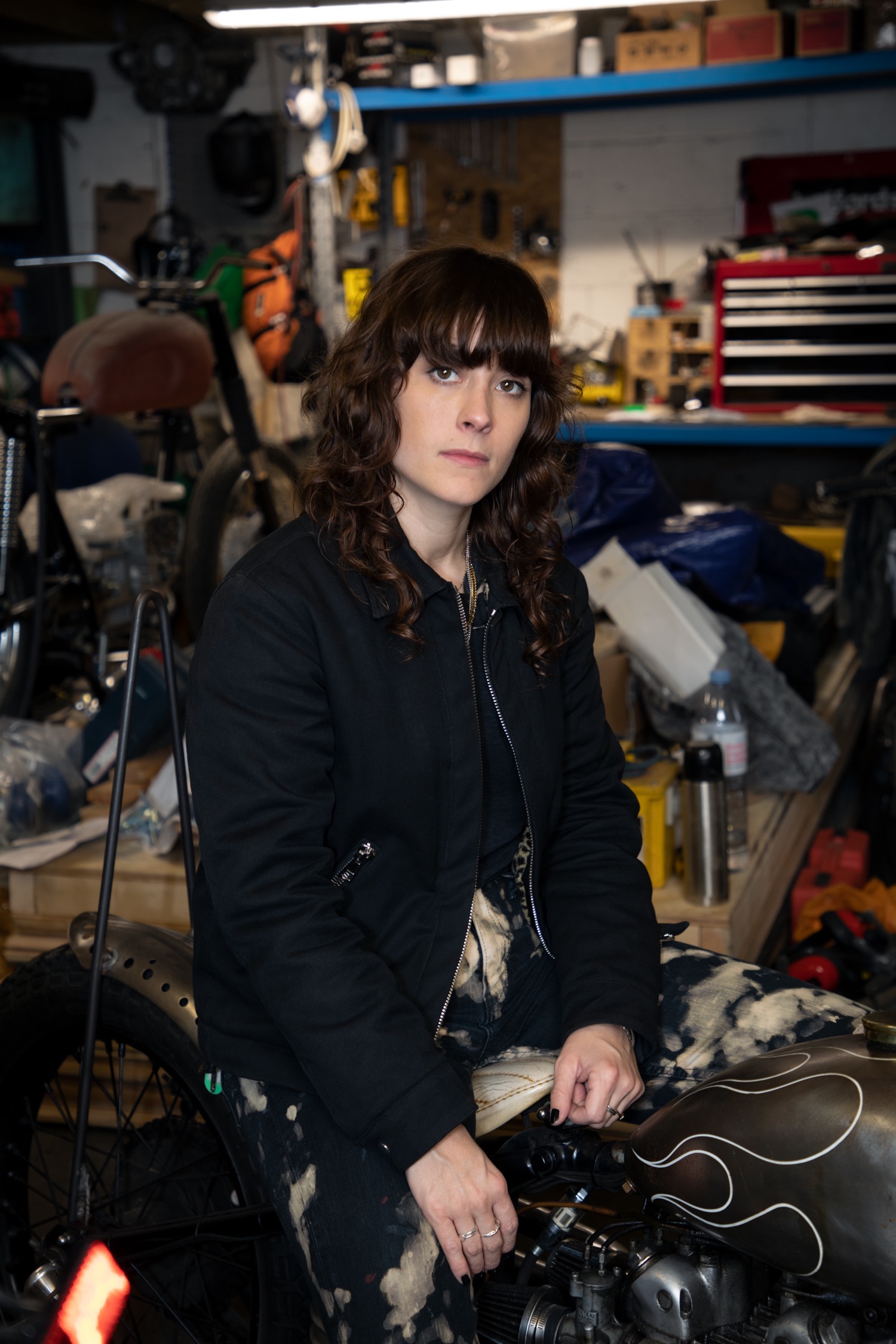 The VC crew refer to Kirsty Lowrey as the ‘Keef Richards’ of the community. (“Being compared to a 70-year-old ex-junkie bloke is fine by me.”) She is also one half of The Pearl Harts, who regularly rock out at VC events.

Five years on from the launch of their first website, VC London has become an empowering rallying point for a whole bunch of women who eschew the greasy clichés of biker culture. They’ve achieved this without resorting to the toe-curling ‘babes on bikes’ counter-cliché, too . “We’ve been moving the dial in ways we couldn’t have expected – just by turning up and having fun and not giving a fuck,” says Gemma.

Things accelerated after their second initiative, Camp VC, launched in 2017. The event grew out of a collaboration with American counterparts and OGs of the alt bike scene Babes Ride Out the previous year. It was also built from the ground-up on a Squarespace website. This was the first motorbike festival of its kind in the UK, merging motorcycles with action sports from skateboarding to climbing: the now-legendary first gathering, on a farm in Treharris in the Brecon Beacons – owned by pro enduro rider and Dakar competitor Tamsin Jones – drew a whole new generation of women into the VC fold. “Conversations [that] started through the blog just naturally led to Camp VC,” remembers Gemma. “Through all the chatter on the site and across socials, we knew we just had to get people together and build a platform that could celebrate the magic that happens when a bunch of random women get together around motorbikes.” 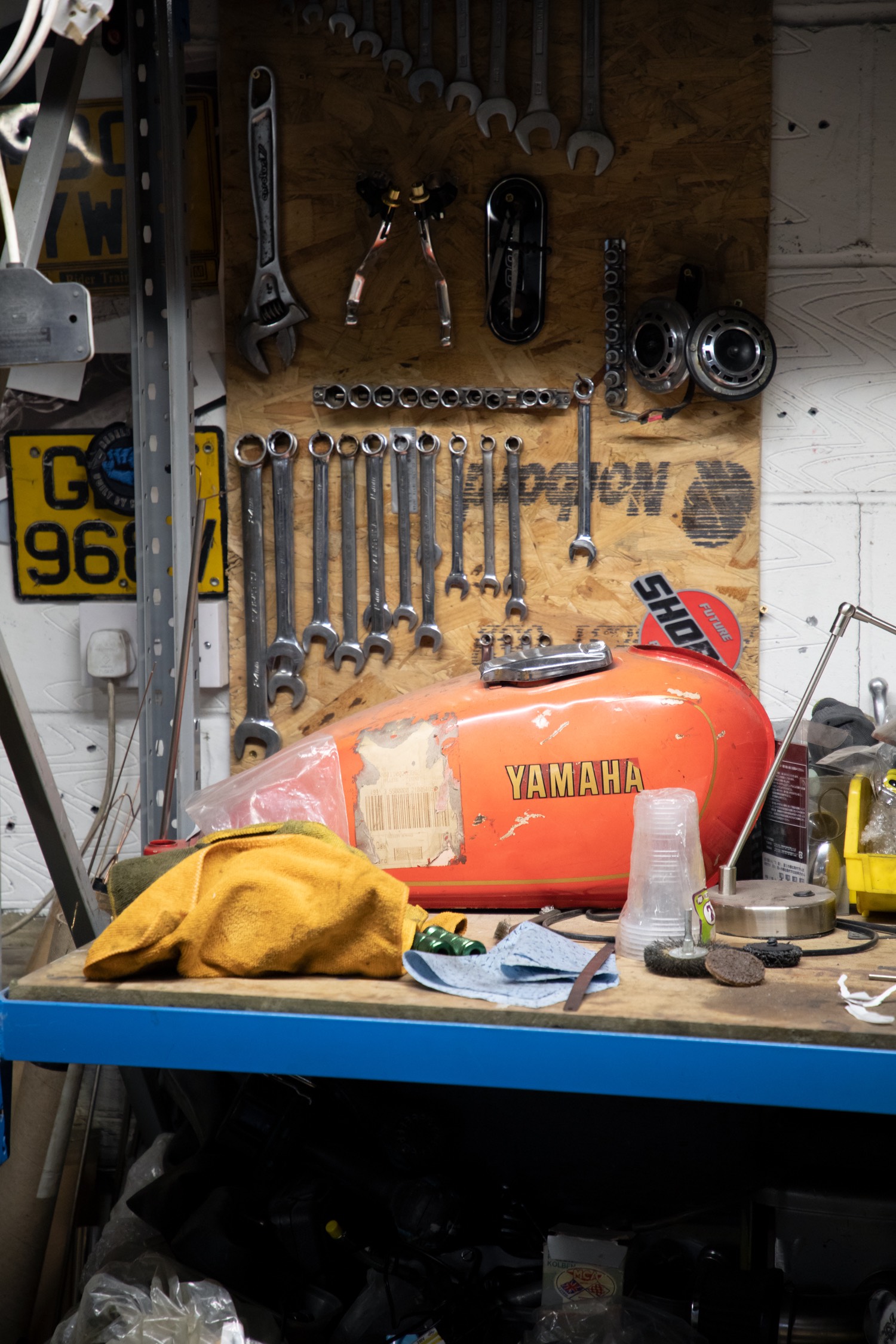 One of the women brought into the fold Via Camp VC is Rozzy: aka 32-year-old Rosalind Duignan-Pearson. “I have been riding since I was a child, but I had never really had anyone else to ride with,” she says.  Since 2018, she has been running the Camp VC site and writing knockabout tales on the VC London Squarespace blog – such as her ‘Rozzy Rides’ series, in which she eloquently dissects the realities versus perceptions of the bikes ridden by the crew. Her incisive intelligence, as demonstrated in the blog series, isn’t the kind that is easily intimidated. Meeting her in person only confirms that there is a knowing kind of sensitivity to the way she approaches the curation of the website.

“I  came across VC via socials and followed these to the VC site, and saw there were all these cool girls riding around on motorbikes. They were in a bit of a gang, and I really wanted to be part of it. But I was too nervous to actually go to any of the meet-ups on my own, because I didn’t know anyone else who rode, and certainly not any women in London.”  The visit to Camp VC was messy. It was hilarious. It was transformative. “I had never realised that many women were into motorcycles!” she adds. “From there I just got more and more involved. I love the vibe of the camp so much, and the focus on female empowerment – empowering you to be confident about riding, and making friends and building community.” 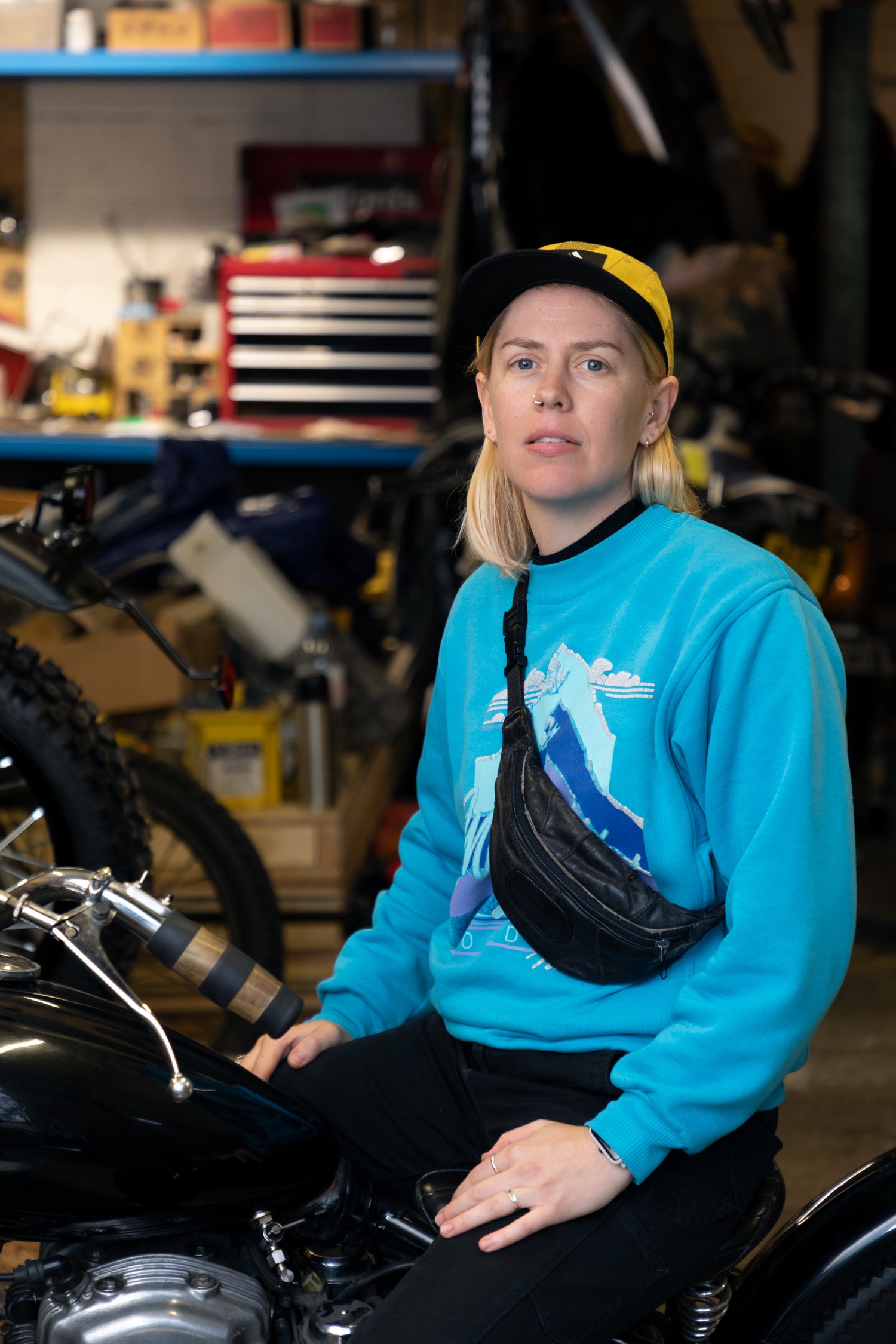 Photographer Sarah Emma Smith provides visual goodness across the VC enterprise. “I love to photograph things with wheels – and the people who come with them too, sometimes…”

When it comes to building that community into the next phase, “queen of the gif” Annelise Sealy is also a driving force. The 30-year-old social media editor, who runs a fashion label as a side hustle and takes care of the VC reach as a passion project, rolls up to the workshop in the driving rain on her burly Triumph Scrambler. The Scrambler is the daily ride – a 1954 Triumph Tiger bobber is the custom build that’s draining all the cash. “I’d gone to Camp VC on my own, and made friends with some really great women,” she says, swinging a leg over the Scrambler. “After that, VC put a post on the blog saying they were going to do a bike build together, and I really wanted to get involved. That was how I met the girls and slowly integrated myself into their lives!”

As well being as a place for her to gain and nurture knowledge,  Annelise sees VC as a motorcycling space where there is no judgement: “Bike culture can be intimidating for anyone starting out. I was always the only woman in every riding class, every mechanics course… meeting the VC crew made me realise it didn’t have to be like that,” she explains. 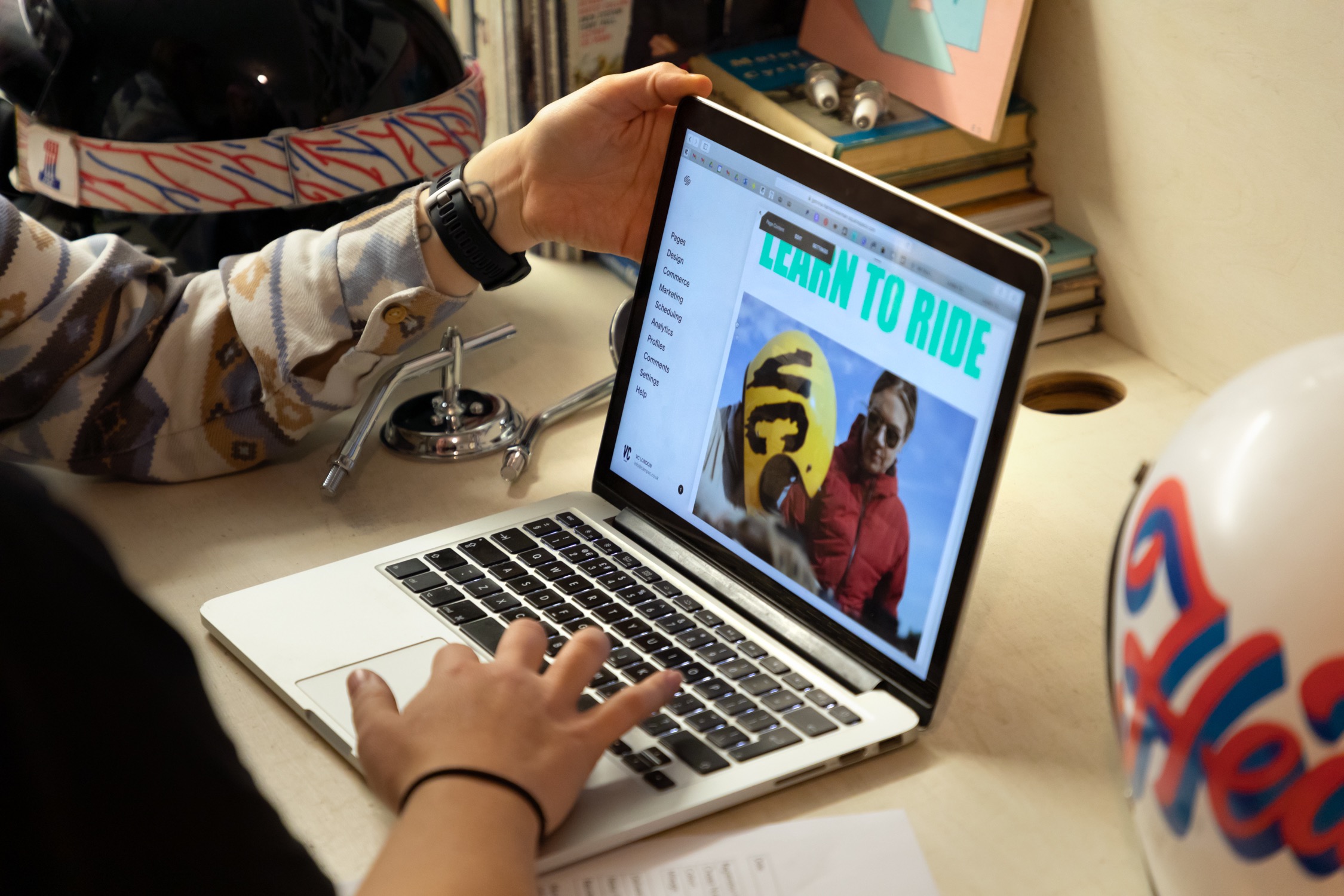 For her, the importance of VC’s digital presence cannot be overstated.  “Via the website, it just snowballed into hundreds and thousands of strangers wanting to learn to ride because they have seen other women doing it,” she continues. “It’s going to be really vital in moving things forward and building the community even further in the next phase.”

In terms of what’s next, VC’s latest initiative is a collaboration with bike brand Herald. The idea is that VC gets a shiny new bike for £1. The crew draws on its huge digital community to make suggestions about a nut-and-bolt customisation project. The bike is raffled off via that community in order to raise money for bike projects, which draw women from the local east London area into the world of motorcycling. “One thing that has been really important throughout the whole time we have done VC, has been the marriage between the online and in real life,” says Gemma. “I can’t teach someone to ride a motorcycle online, but what I can do is give them all the information that they need to make a plan for the future to be able to get into it.” 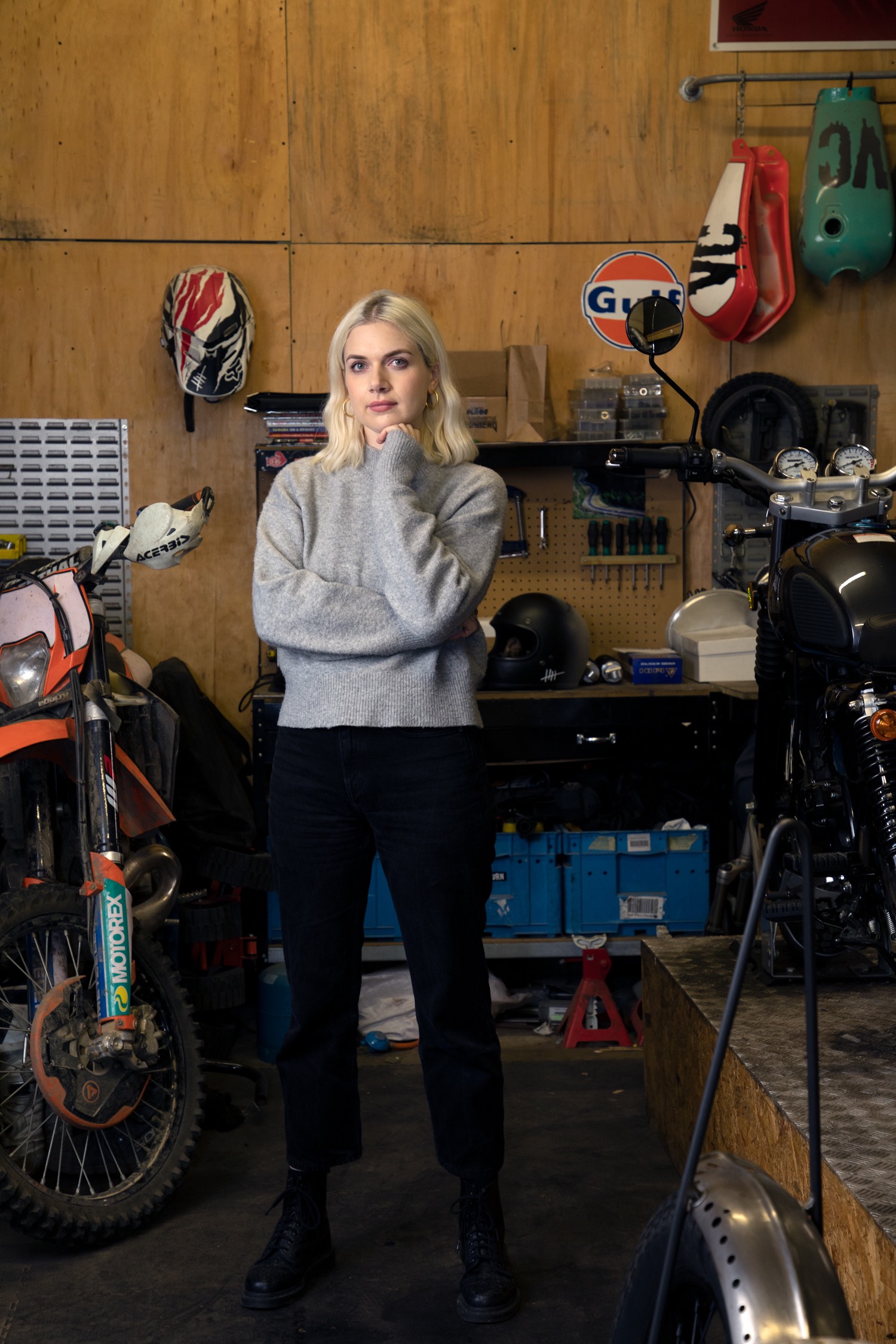 Annelise Sealy runs VC’s social media. “Getting involved in motorbikes is about me doing something for myself, by myself – it’s about putting a stake in the ground and standing by it.”

Look out for more stories from Future Proof, an editorial series in partnership with Squarespace.

Linkedin
RELATED ARTICLES
OTHER ARTICLES
The revered showbiz chronicler recalls his journalistic beginnings, documenting subcultural scraps in the ’80s.
New legislation is set to make it more difficult to hold Israel accountable for its human rights abuses.
In our first OFFF Dispatch piece, the Arce Studio founder shares her tips on standing out from the crowd.
Government plans to make it harder for people to go to university will only entrench inequality.
From the Yakuza to a biker gang, Bruce Gilden recounts capturing Tokyo and Osaka in the ‘90s.
The government is scrapping the Human Rights Act in a move that will hit marginalised people hardest.