Art & Culture / Are women being erased from history? 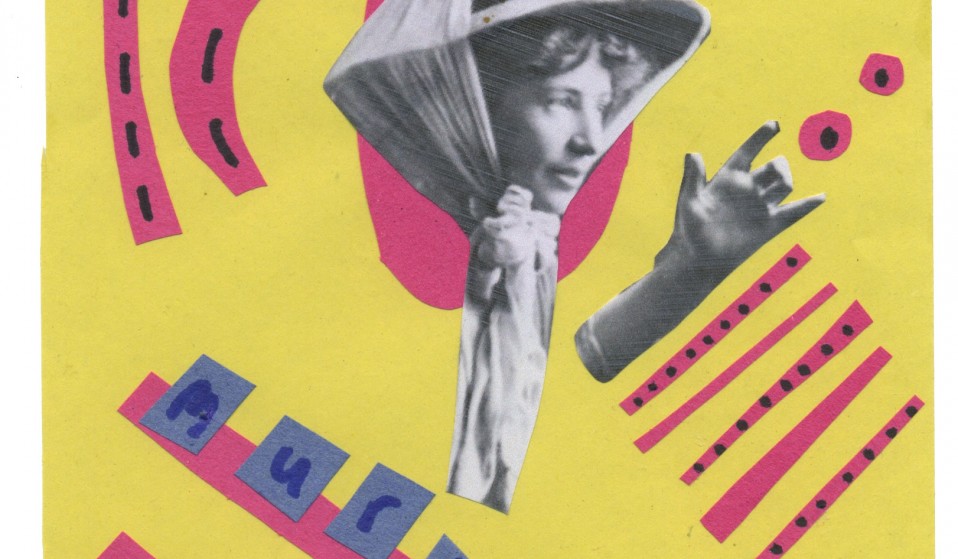 Alice Wroe is using participatory art to access the stories of women overlooked by the history books.

Alice Wroe is using participatory art to help students - and fully-fledged adults - access the stories of incredible women overlooked by the history books.

Alice Wroe can remember exactly where she was the moment she realised history had been duping her. She was studying and listening to an episode of Woman’s Hour about an exhibition at the Women’s Library.

“The presenter was talking through all of these different events and women from history, and over the top was the song from Mary Poppins that goes,‘Our daughters, daughters will adore us and they’ll sing in grateful chorus well done sister suffragette’. It may be partly due to my childhood nostalgia for that film, but I was totally overwhelmed and realized I never felt or said ‘well done’ to the suffragettes or any of the women that had come before me, but rather saw myself in some kind of vacuum just arriving at the life I was living.” 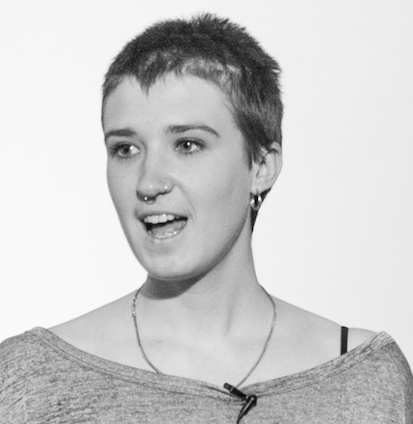 Feeling left out and let down by an education system that had airbrushed out the stories of incredible women, Alice started doing her own research and was instantly inspired. “Women started cropping up in so many areas of my life, these incredible people that made me feel bigger, fuller, taller take up more space in the world. I then started to feel angry, and let down by my education system that it had taken me this long to feel this sense of belonging and empowerment.” 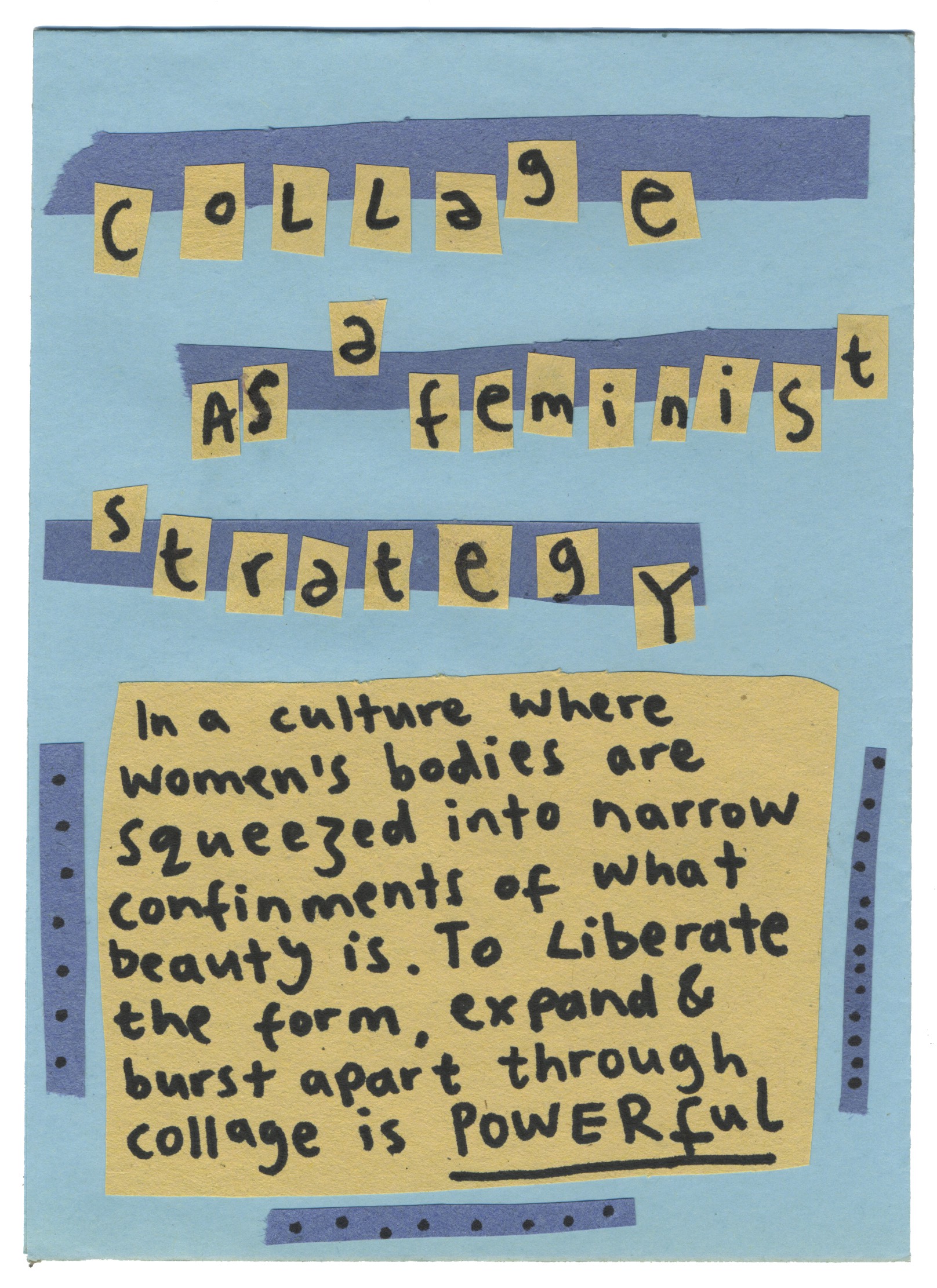 Alice took all that energy and frustration and created Herstory, a participatory art project that uses feminist art – vibrant punk-infused collage and zines – to engage people with women’s history. The project started in schools with workshops inspired by The Dinner Party, a feminist art piece by Judy Chicago that commemorates 30 woman from the past. With Alice as their lead, the students sit around bright tables and adopt the persona of a historical woman, proudly recounting their journey – as an activist, or aviator, or pioneering poet – in the first-person for their peers. 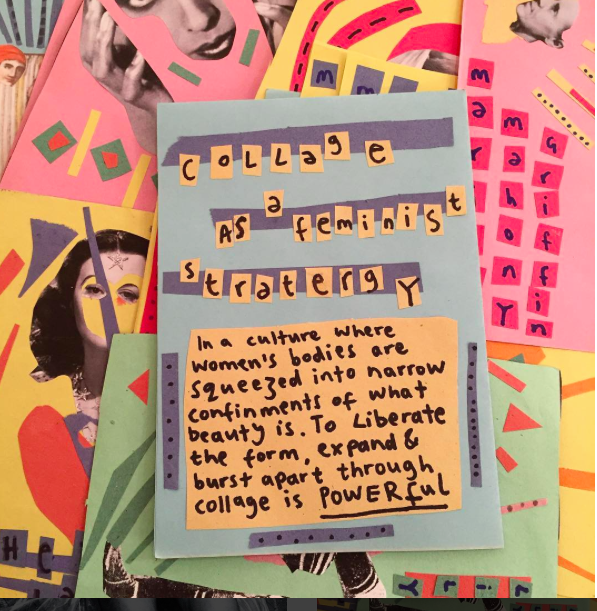 “History has generally been passed down from one white, straight, wealthy man to another and then once written down becomes fact, and sneaks into our classrooms,” says Alice, who remembers one group in particular who clambered at these untold tales. “I had no one who wanted to be Emmeline Pankhurst, I had no Rosa Parks, not one Rosalind Franklin. I had three Claudia Jones, four Sylvia Riveras and three Nettie Honeyballs! They were hungry for new names, a new history, they didn’t want the same women who get ceremoniously wheeled out. They pushed me to be braver with my choices.” 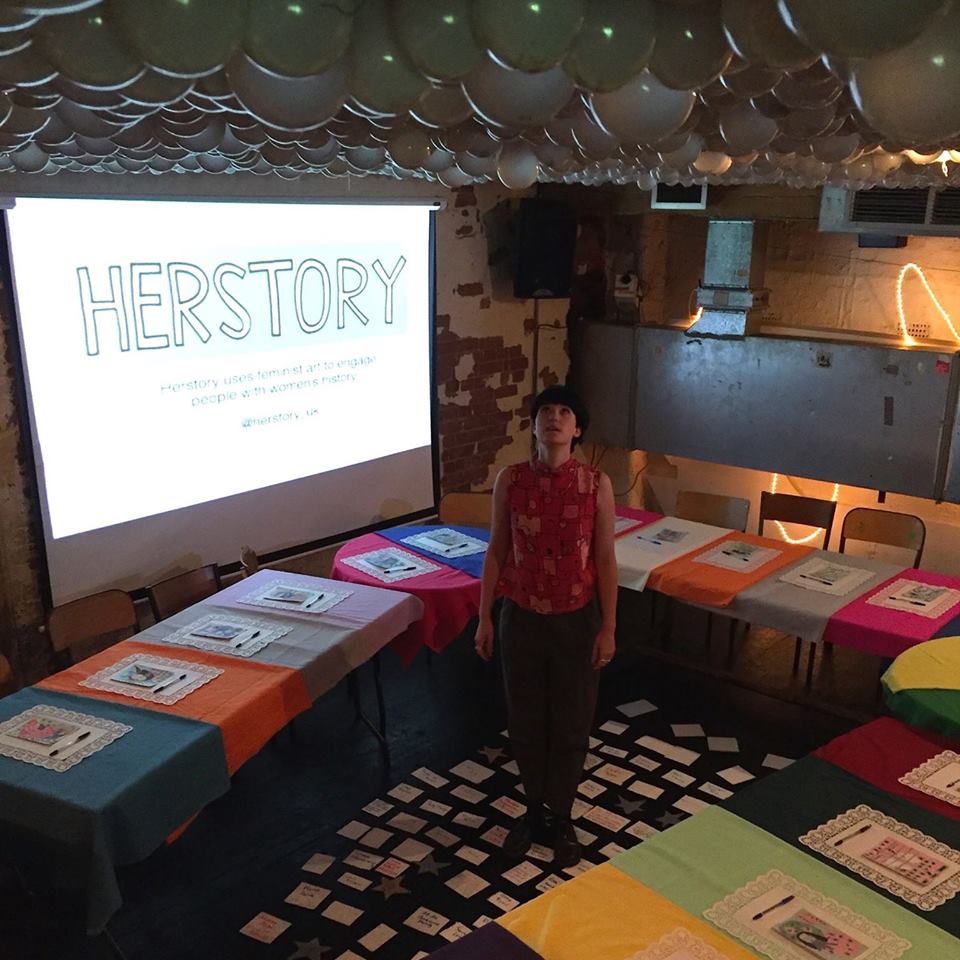 But it’s not just kids that want history redressed. Alice now runs Herstory workshops for adults, including events at the Tate and the Southbank Centre, and is working to spread the message through talks. She’s also contributed to issue one of Orlando, a new magazine inspired by identity politics and alternative culture, which launches at the Book Club, Shoreditch on 19 April, 2016.

Why are women’s stories so under-represented – and is the problem confined to just our schools?

School is important because it’s the place where lots of us are built, where we gather ourselves and a sense of who we are in relation to the rest of the world. The underrepresentation of women is not an issue confined to schools, but rather the lack of women in the curriculum is a symptom and also a cause of living within a patriarchal society. I think schools are in a unique position, where they can be a significant part of a solution. If at a young age, the world is presented to students as a place for everyone, a place that was created and sustained by people of all genders, if all students could see themselves in who they’re taught, to my mind they will leave school and build a world that reflects this experience. 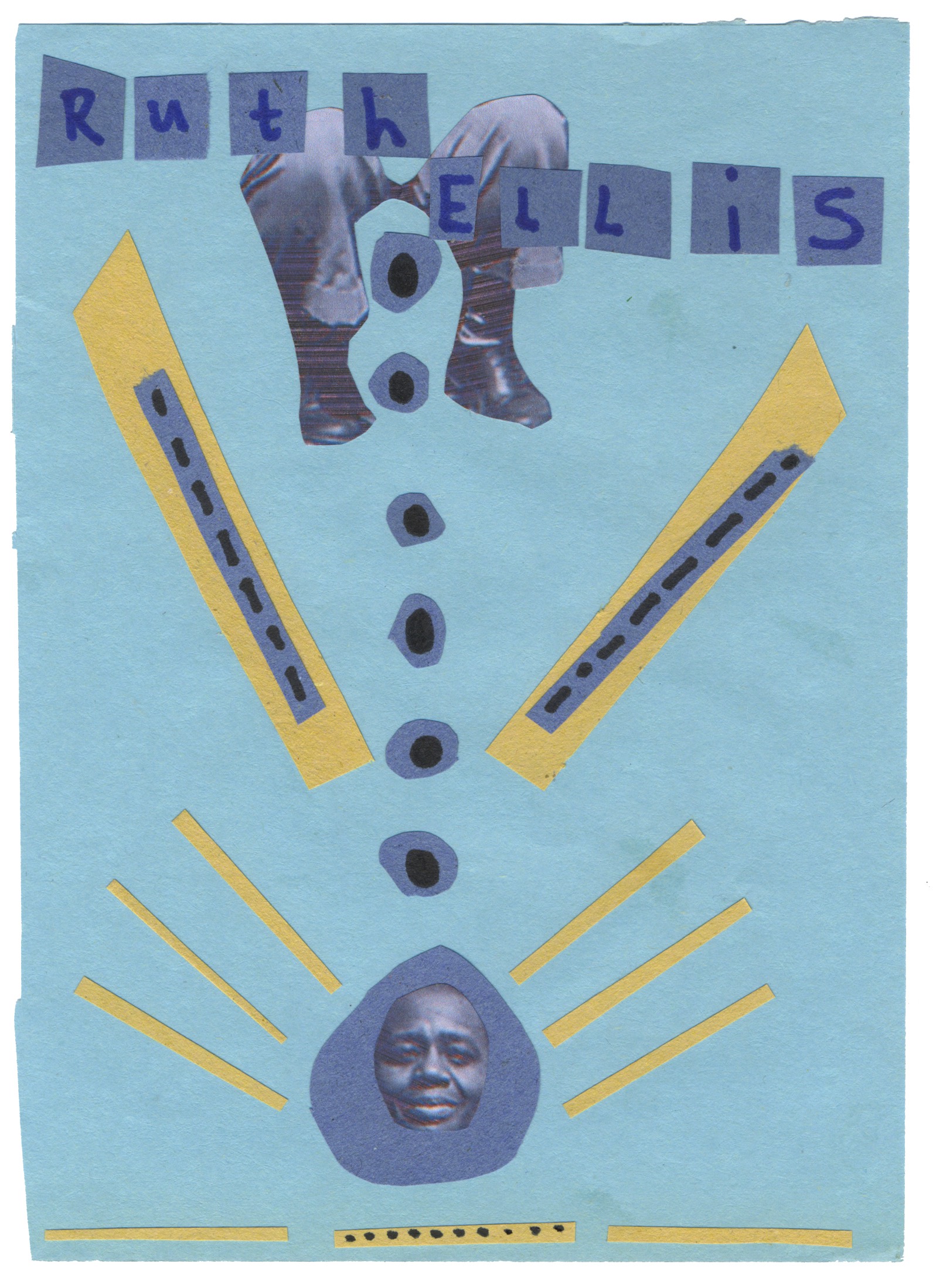 What’s at stake when women’s stories are overlooked or even erased from history? What impact does it have on kids, society etc?

Being inspired is important, that feeling of being so full of someone they float you upwards and move you forwards. But women’s history can offer us more than that, we need it to puncture patriarchy, to bring us to our senses, shake us when we dismiss oppression as natural. We need women like Lily Parr to be talked about at football matches. Emmy Noether to stand and hold the hand of those on exam boards when they say there are no female mathematicians to put in the syllabus. Women like Frederique Petrides to cheer and whoop as students demands more women musicians in the curriculum. We need a whole host of women like Olive Morris, Marsha P Johnson and Sophia Duleep Singh to stand together and barricade Nicky Morgan’s office door and say, ’Really?!’

There is so much at stake by overlooking the stories of women who’ve come before us, and so much to gain through centering them. It is through role models that our daughters will grow and through looking to the past that we will know their futures are possible. 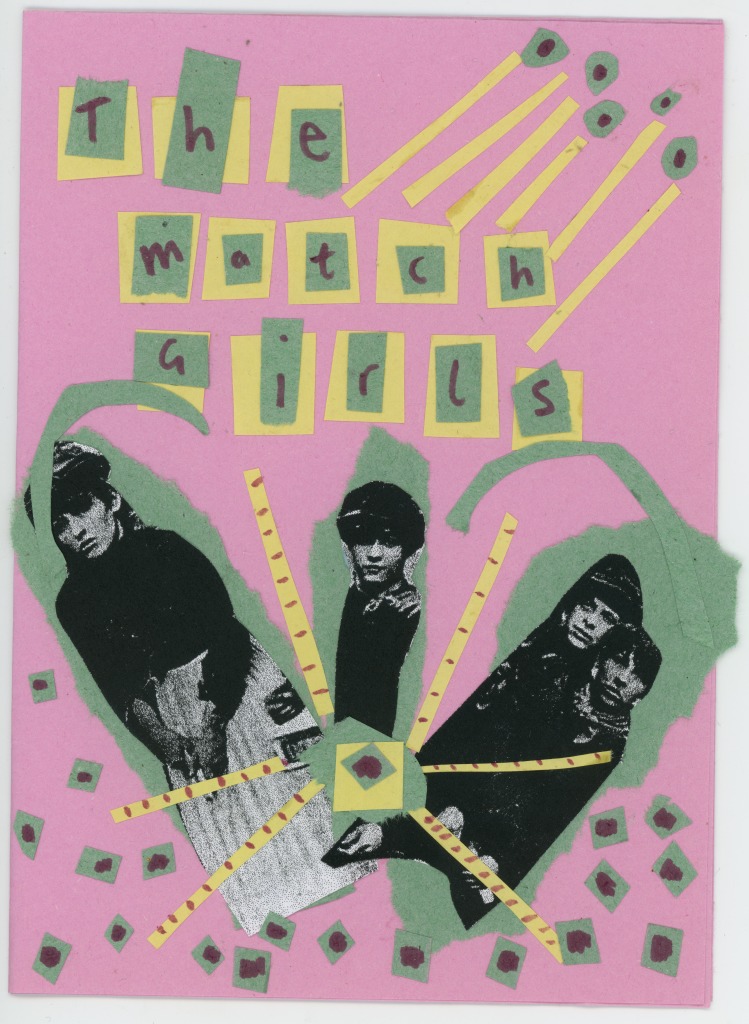 Who are some of the inspirational women you’ve learnt about in your adult life?

I like to think of the women I’ve learnt about meeting each other. I like to imagine what Evelyn Dunbar would make of the Jo Spence, both committed to making women’s work visible. I like to think of Ruth Ellis having the Ladies of Llagollen at one of her and Babe’s parties, or what Ada Lovelace and Margaret Hamilton would talk about over coffee. All of these women are inspirational, and complex and human- more human when you think of them in relation to each other. 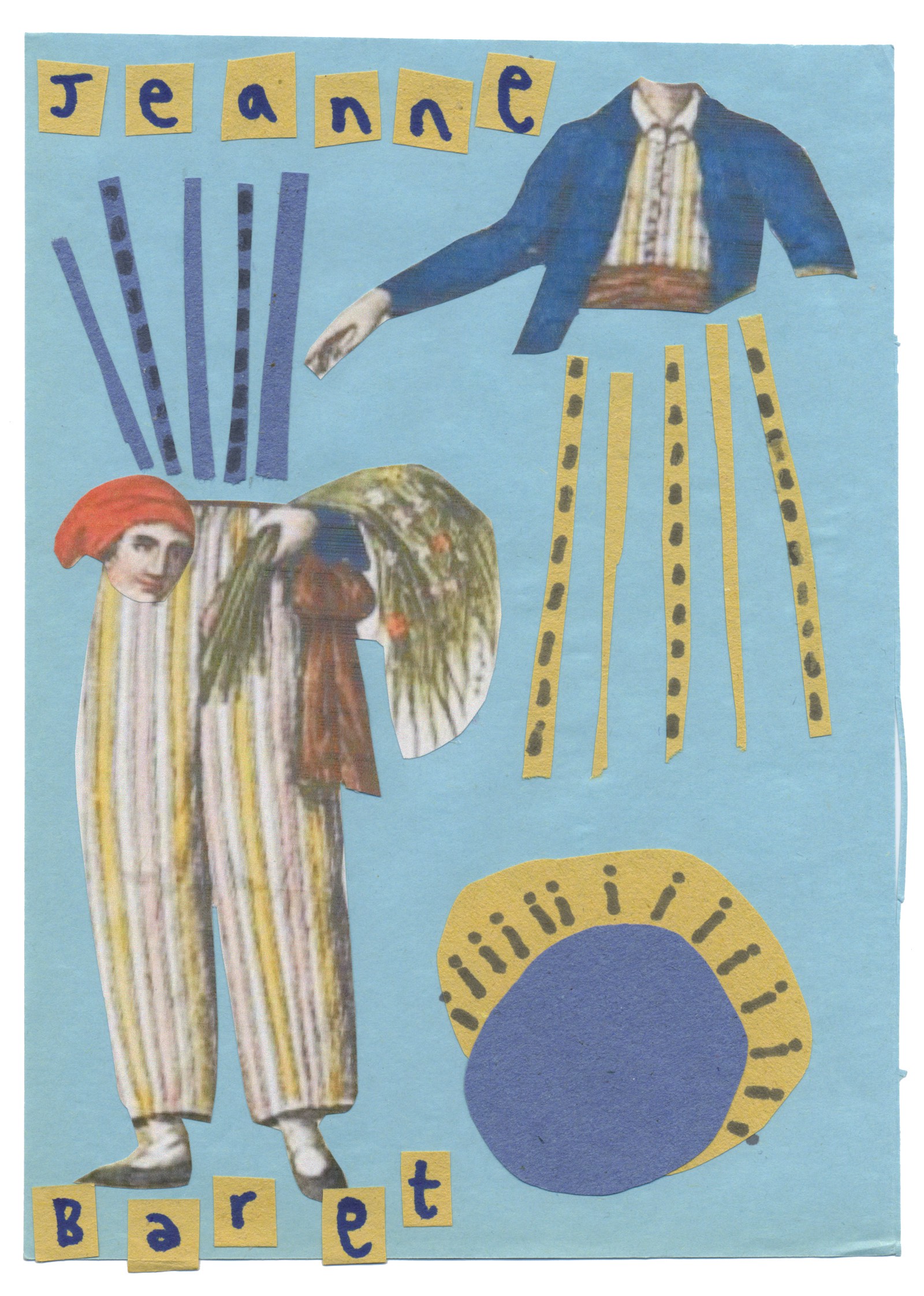 Do you see this as a feminist history – or is that a narrow representation of what you’re trying to do?

What I am doing is feminist, proudly so. I think to add a preface to anything implies it is niche, deviates from the norm or appeals to only a small group of people. But for me feminism must be inclusive, it is BIG, it connects people and opens things up. Herstory cannot be anything but a feminist history and must be for everyone. To engage with women’s history is a feminist act, to give voice to those voices who have been systematically silenced is political and is necessary. However, what I am doing is not a history of feminism, it is not a who’s who’s of Women’s Lib but rather intends to open up space. 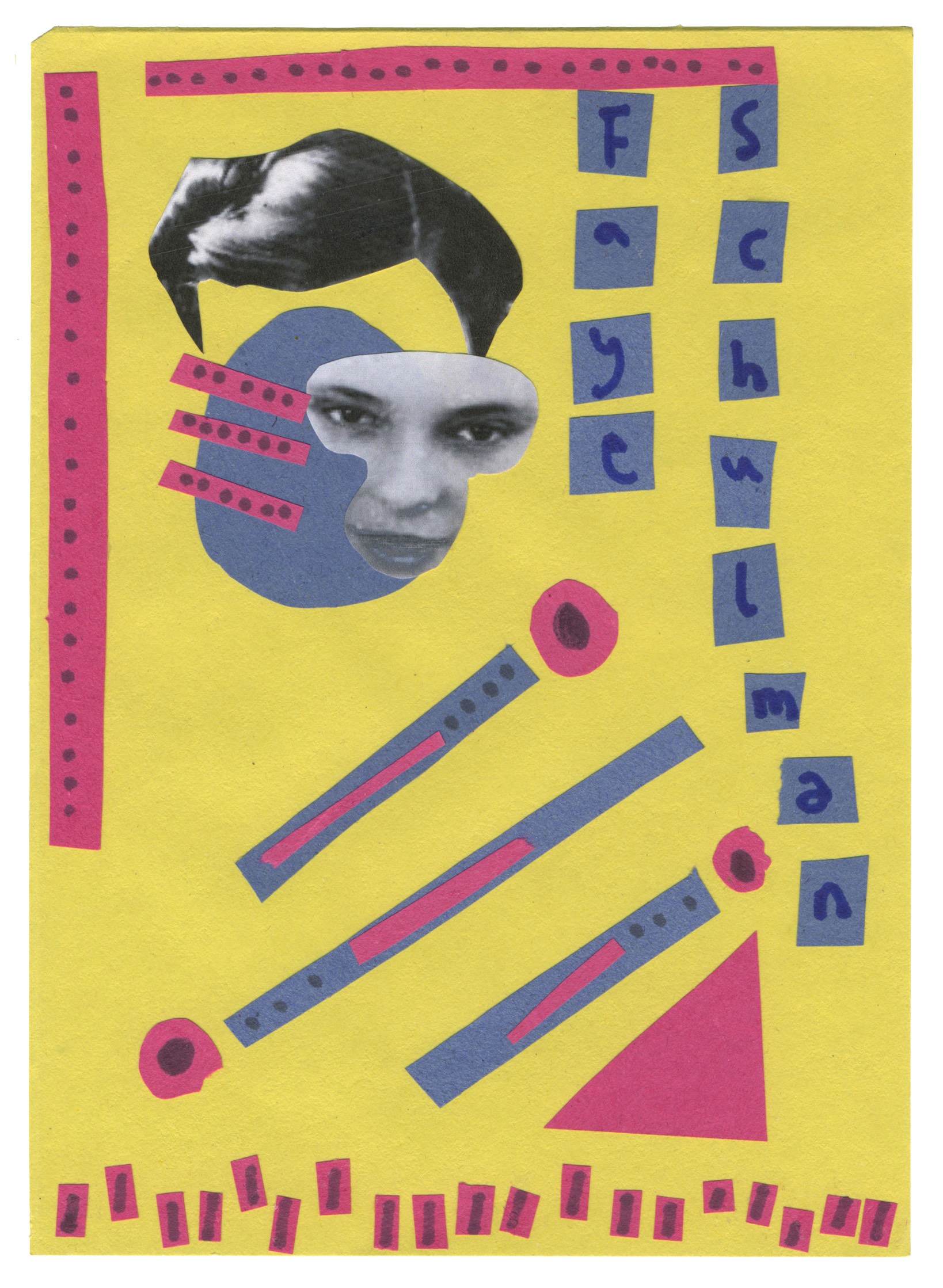 Why are zines and collage art a powerful medium for this message?

One of my students said when making zines in a Herstory session she felt she was ‘doing’ feminism rather than ‘talking’ about it. I feel the same. Women have been ‘doing’ feminism in this way for a long time. Victorian women had little access to public life, but scrap books enabled them to comment on it. cut  it up and reshape within the confines of the domestic. Feminist zines shared across countries, little pockets of resistance permeating through culture, rupturing the mainstream, connecting bedrooms around the world, building feminist communities. In Hannah Hoch’s photo montages it is the women who move, swoop, fly across the page, in her collages they are the agents of activity. 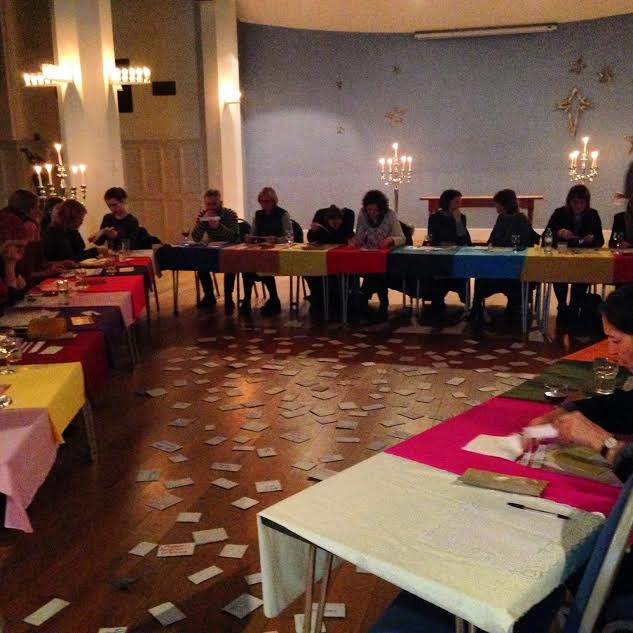 For me, collage is a feminist strategy, in a world where the way women’s bodies are represented is so uniform, the confines of what is beautiful and acceptable is so narrow, to liberate the form and burst the body apart is a radical feminist act. The collages I make are part of a strong feminist tradition, but are meant to be a new way of remembering and relating to women from the past, an approach that centers their lives and experience rather than their bodies. 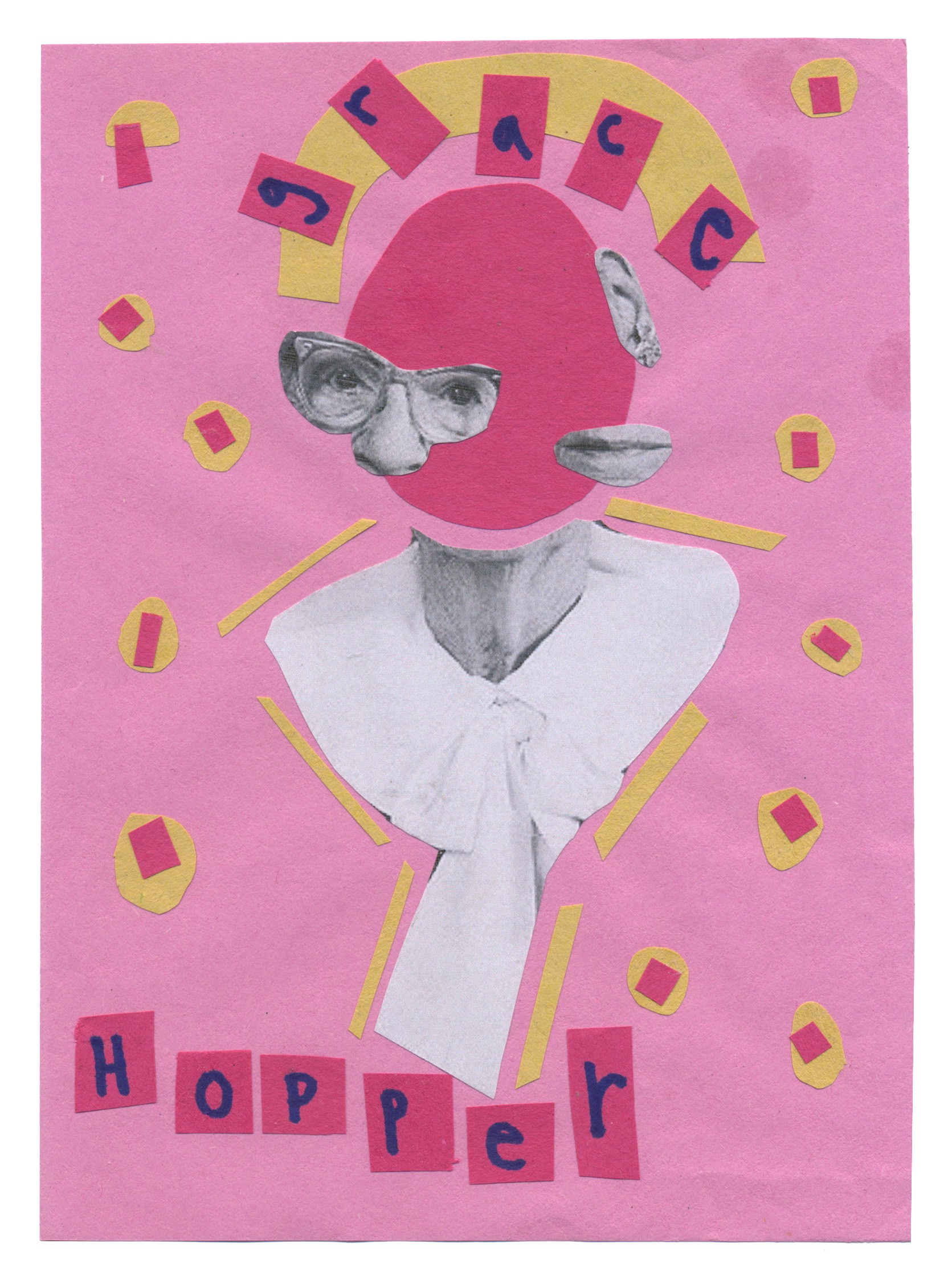 Do you think it’s a good time to be a woman with a story to tell?

I am delighted to find that there is a hunger for new stories, for an alternative cannon, for different points of departure and fundamentally for a more just way of living. Women’s history is a good place to start. It is an exciting time to be a feminist, because we are everywhere. We are in work, in schools, in libraries, we are suddenly in films, in books, on stages, we are talking across countries, selling out tours, filling protests. We are supporting and celebrating each other, joining up, standing up. It is an excellent time to have a story to tell because people are really listening.

Orlando launches at The Book Club, Shoreditch, on 19 April, 2016. Tickets are available here.

Linkedin
RELATED ARTICLES
OTHER ARTICLES
In her new book, the author explores the country’s housing crisis in human terms and calls for radical action to address a broken system.
Photographer Matthew Brookes recalls following a group of young people in Venice Beach living in search of the perfect wave.
With inflation now at a 40-year-high of 9 per cent, demonstrations organised by TUC took place to demand action from the government.
The last few years have seen an increase in LGBTQ-led initiatives to feed the hungry, with many finding ways to stay afloat despite the challenges.
50 years since its inception, and the campaign calling for recognition that capitalism depends on domestic labour is as pertinent as ever.
In the latest instalment of Photographers in Conversation, the chronicler of raves, protests and beyond explains why he’s drawn to such specifically visceral environments.