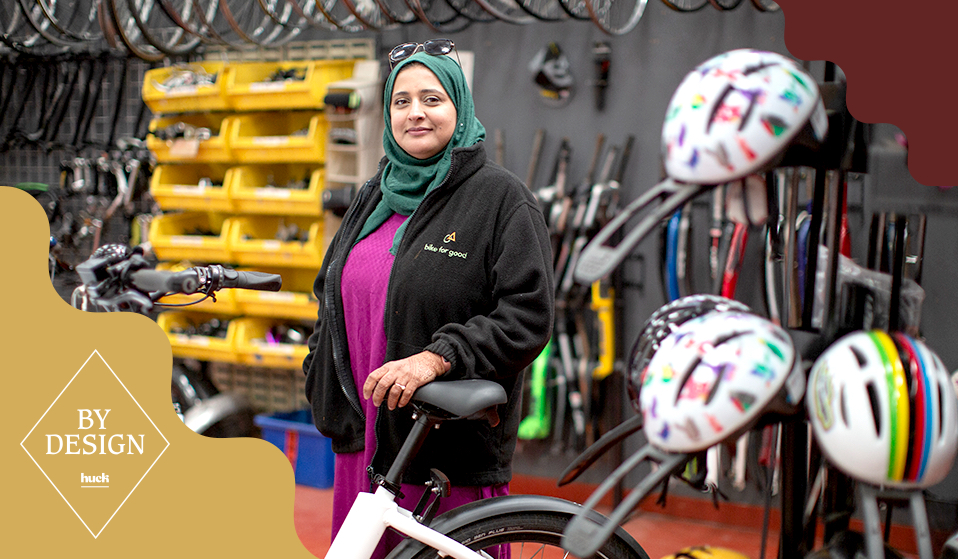 In the second story from By Design, we take a ride with Bike For Good, an organisation working to make cycling more accessible in the Scottish city – and beyond.

By Design is an editorial series, created in collaboration with 99designs by Vistaprint, that celebrates small businesses across the UK and spotlights the power of a strong visual identity. In story two, we take a ride with Bike For Good, an organisation working to make cycling more accessible in the Scottish city – and beyond.

When Greg Kinsman-Chauvet was four years old, his dad tried to teach him to ride a bike. In the shadow of the mountains just outside of Monaco – where he lived at the time – he rode around on stabilisers with no real issues.

Eventually, though, there came a day when the stabilisers had to go. Greg steeled himself and pushed off. For the briefest of seconds, he was doing it – he was riding a bike. But the euphoria was quickly subsumed by terror as he careened towards a cliff and then over it. The shock remains seared into his brain today.

Many years later, Greg, now in his 20s, was back in Monaco. By his own admission, the ‘cliff’ that had so callously taken him was, in fact, just a ditch. However, his entrenched fear of bikes remained. His father, a keen cyclist, tried to entice him back into learning how to ride, but he refused. 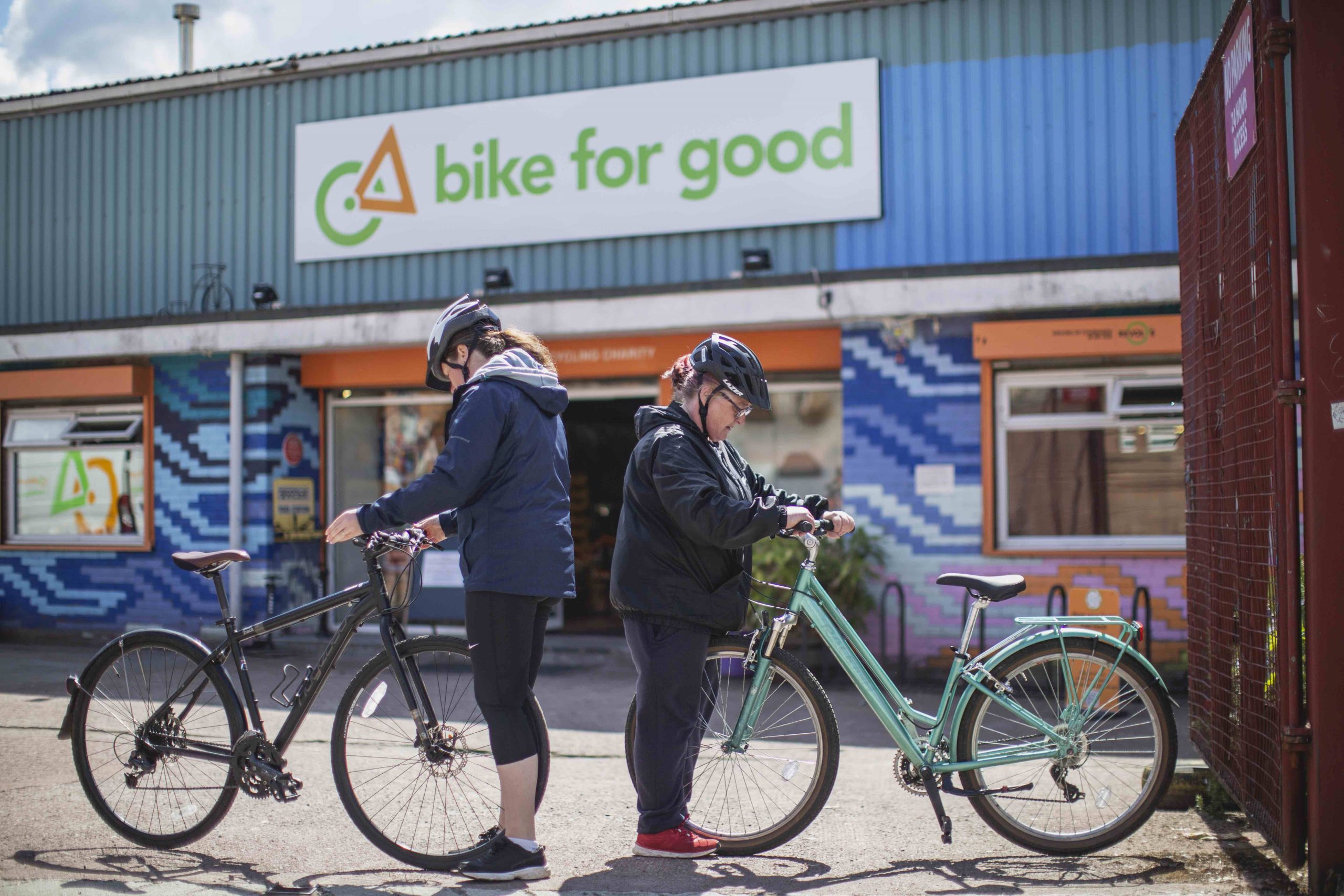 Soon after, Greg moved to Edinburgh and found himself trapped in a corporate job. As the drudgery of the 9-to-5 wore him down, he sought out friends – most of whom were into bikes. Each weekend, they’d invite him out on rides; each weekend, he’d make a different excuse. Given that he was now an adult, he thought the time to learn how to ride had passed him by – until he saw an advert for The Bike Station, a collective in Edinburgh that offered cycling lessons and support to those that needed it. He got in touch with them and began taking lessons. Before long, it became his life.

As his cycling journey continued, Greg moved to Glasgow, where he discovered that there wasn’t anything like Bike Station at the time. In response, he set up the Glasgow Bike Shed in the city’s Barras Market in July 2010. The organisation quickly soared in popularity and moved to a site in the city’s West End, before opening a secondary location in the south of Glasgow and changing its name: first to Glasgow Bike Station, then to Bike for Good – the title it operates under today. From its very beginnings, it has set out to promote cycling for people across the city, providing access to lessons, support and affordable bikes for all. 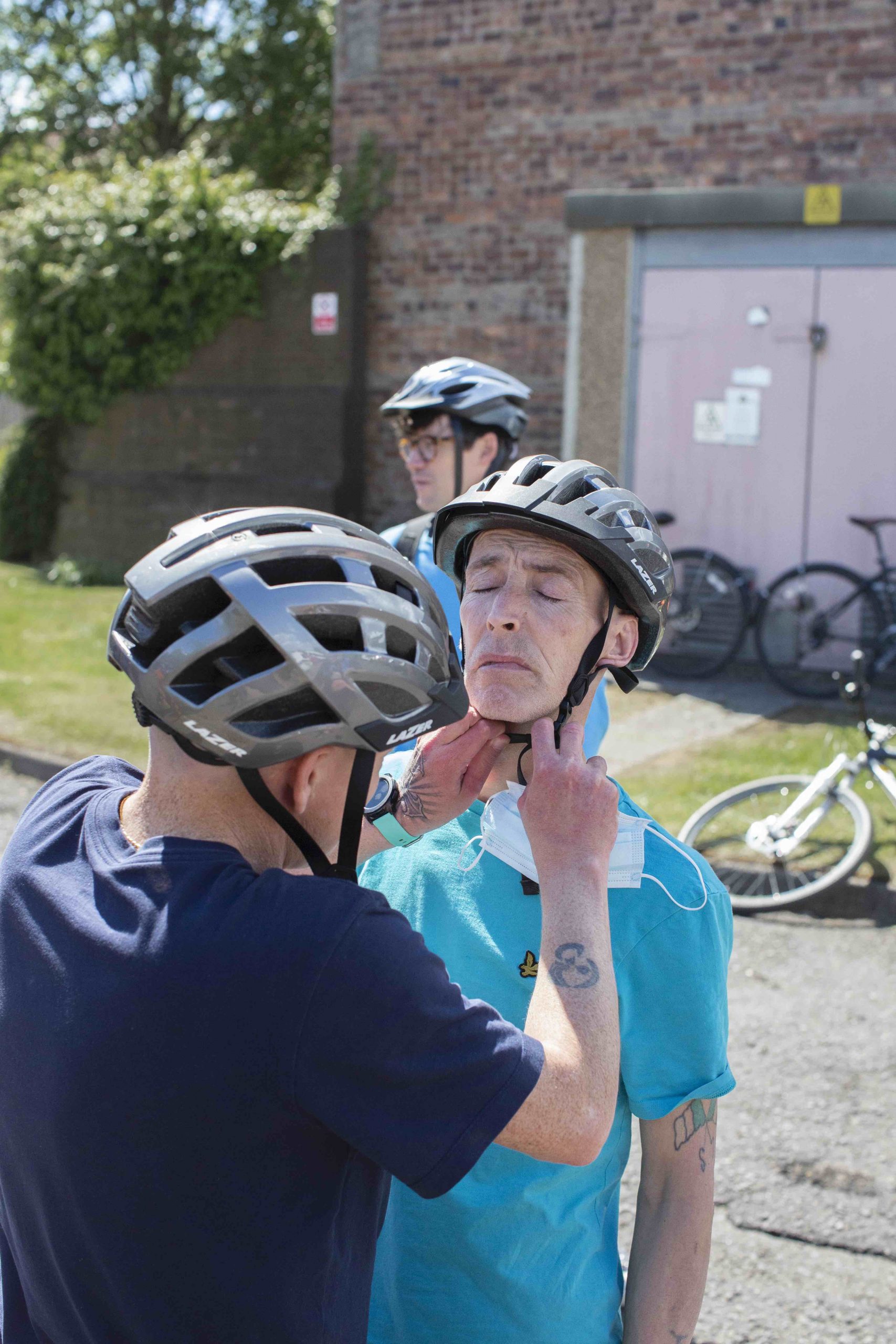 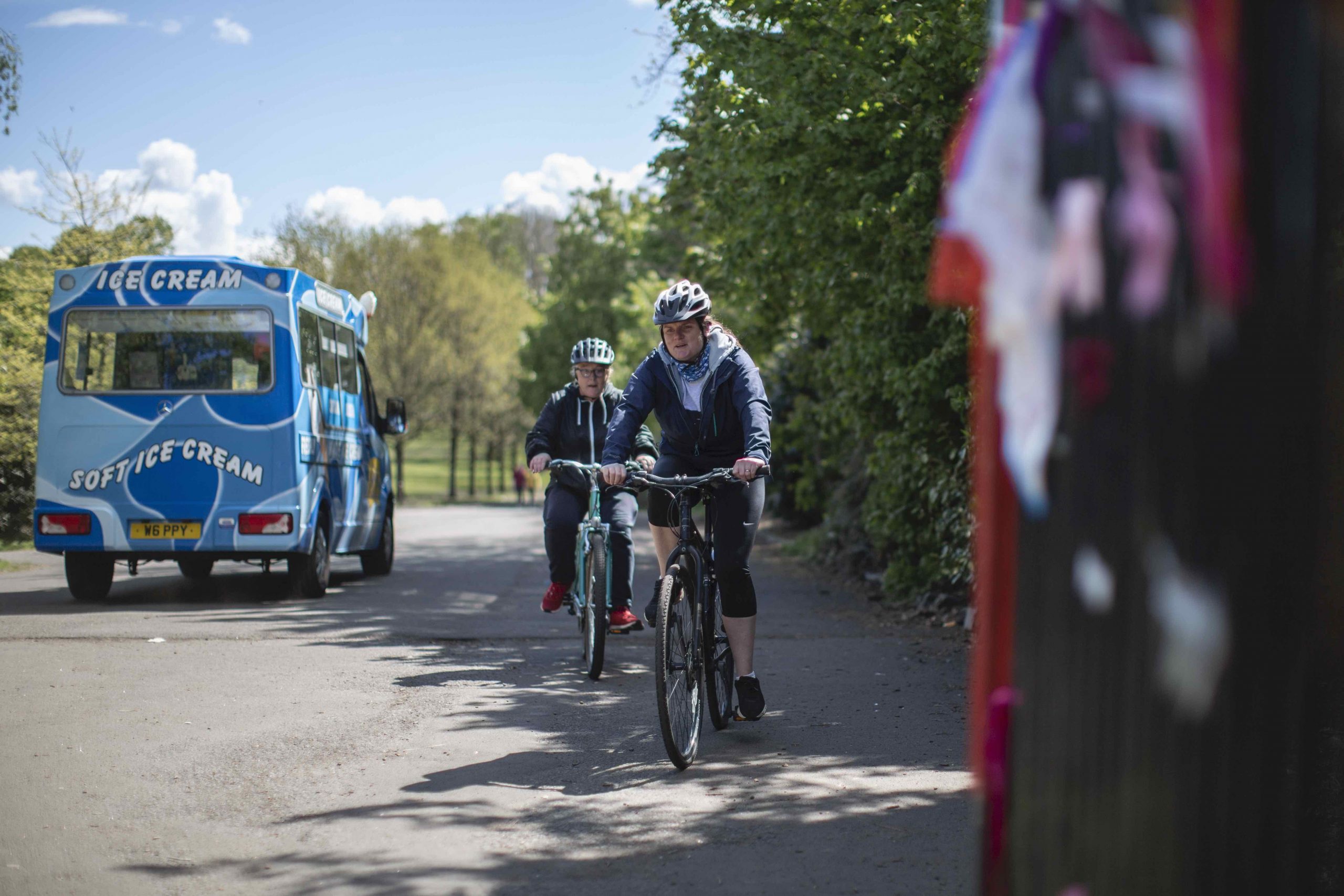 “When I first started, there was a really small group of cyclists in the city,” says Greg. “We’d meet up because we all knew each other.” Despite the small beginnings, though, Bike For Good has grown exponentially in it’s 11 years – as has demand for cycling in the city. A 2018 study showed that trips in and out of the city centre on bikes had risen by 111 per cent, with uptake even greater during the pandemic.

In this sense, it’s an exciting time for Bike For Good, given that their primary aim as an organisation is to encourage more people to settle on cycling as their primary mode of transport. “We offer a whole range of different services and activities for the people of Glasgow and greater Glasgow to help us to achieve that mission,” says Head of Community Outreach Victoria Leiper.

This includes the sale of refurbished bikes. Members of the public kindly donate bikes for Bike For Good to restore in their workshop, where they are then sold on for an affordable price. It’s all part of the mission to reach communities who’ve previously been shut out of cycling. “We deliver a whole programme of community outreach to reach people who are new to cycling, or who maybe can’t afford to buy a bike, or don’t even know they want to cycle yet,” adds Victoria. 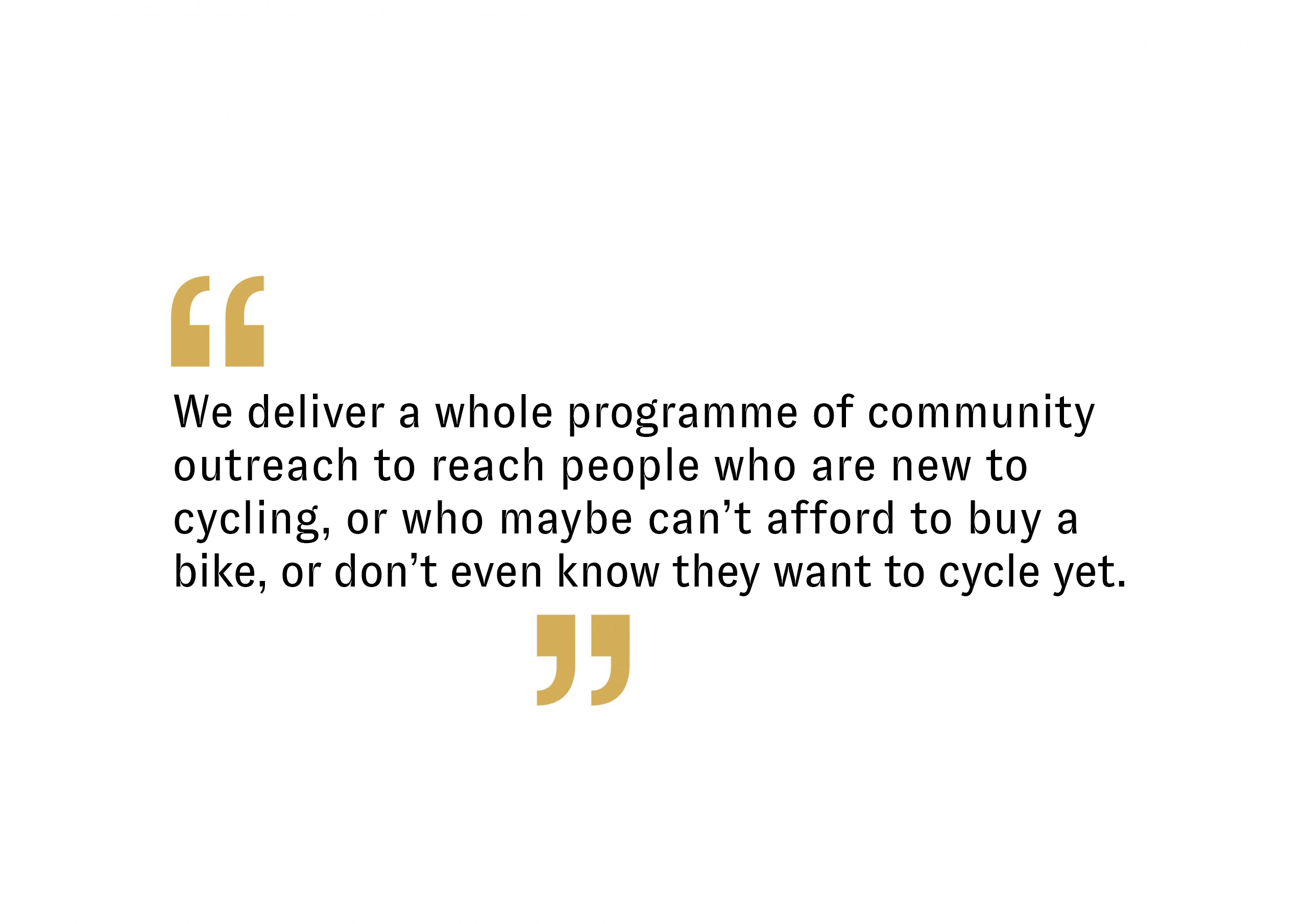 In both their West End and Southside hubs, there are currently stacks of donated bikes waiting to be serviced and rebuilt by the organisation’s team of mechanics and volunteers. When the organisation first began in the Barras Market, there were just a few volunteers: today, Bike for Good employs over 50 people, as well as having around 60 active volunteers who help to deliver training and outreach programmes.

During the coronavirus lockdown, the organisation repurposed its network to help deliver food and welfare parcels to those self-isolating or recovering from illness. Now, with the country beginning to reopen, so too are many of the programmes and services Bike For Good usually operates across Glasgow.

“We work with a whole range of community partners across the city,” says Victoria. “That includes homelessness services, schools, community-based groups and organisations, groups who support refugees and asylum seekers, plus young people who are not in education, employment or training.” 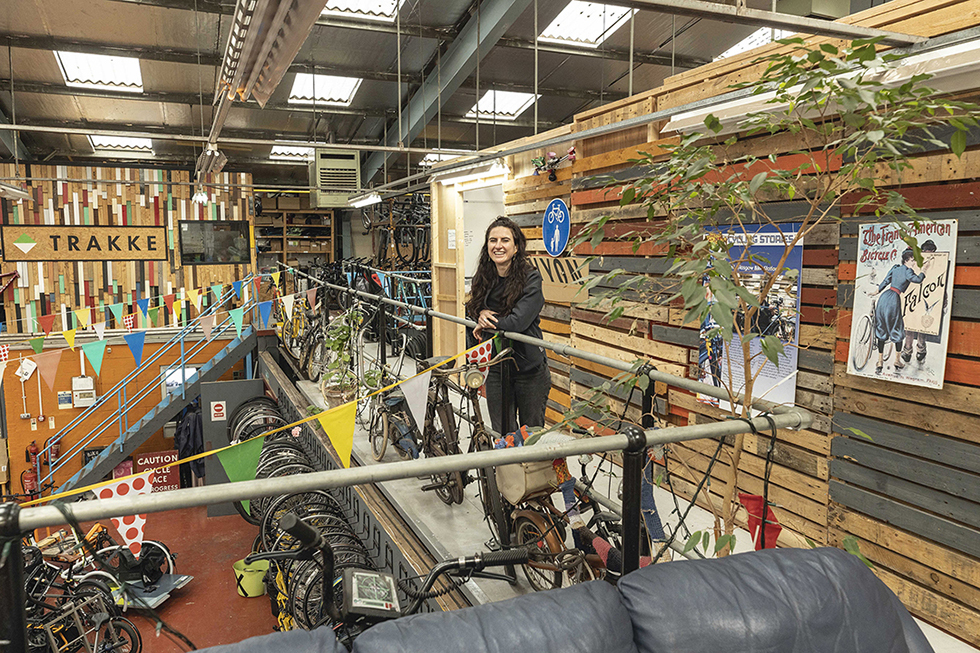 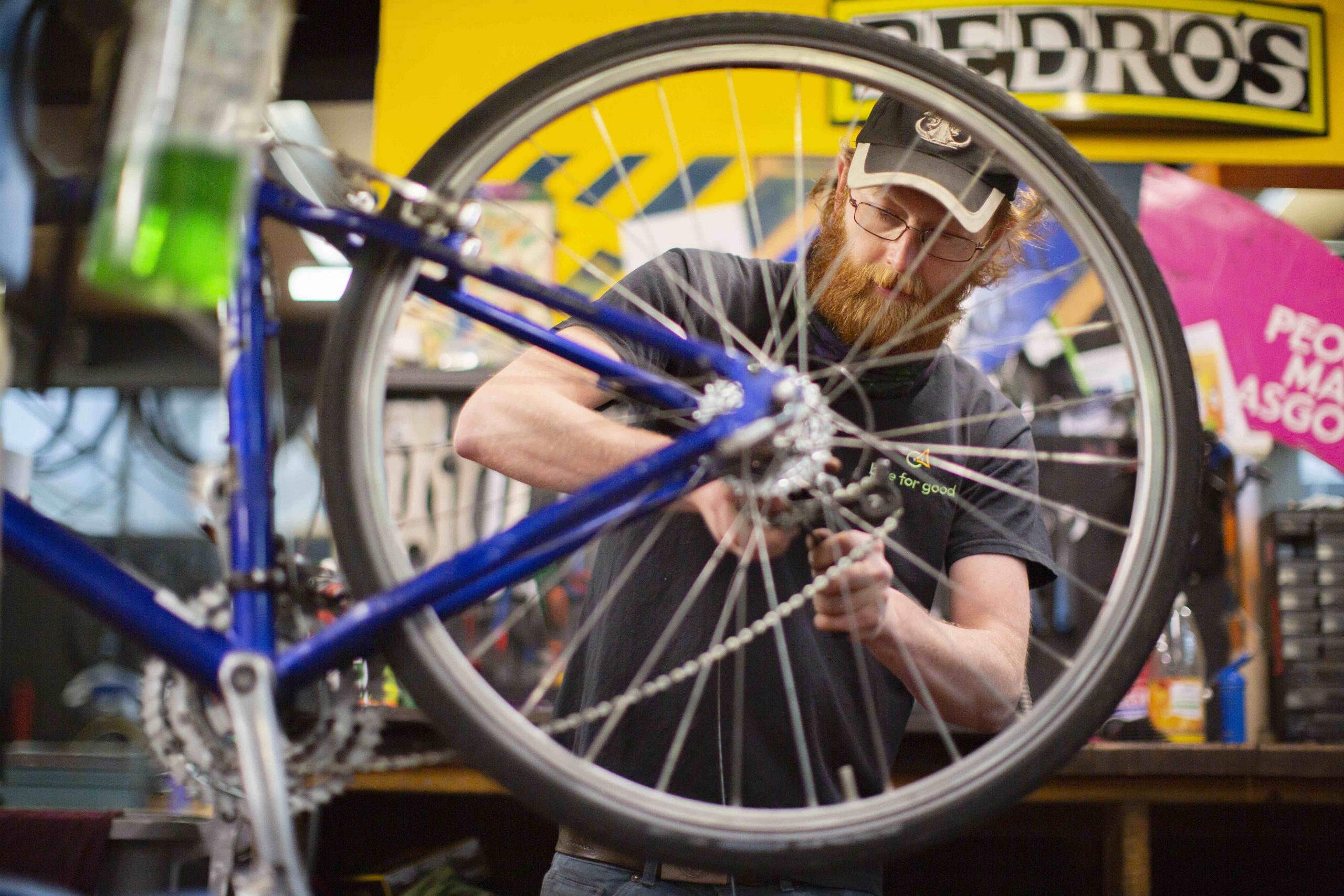 “We deliver these [initiatives] in their areas so that it’s really accessible. They include build-your-own bike courses where a young person or an adult gets to build a bike from scratch – they get a bike maintenance qualification and then they get to keep the bike at the end, so they have a mode of transport and the confidence to cycle. We also do cycle training in a one-to-one or a group setting, as well as working in partnership with GP surgeries through a social-prescribing model, where we support people who have, or are recovering from, long-term health conditions. We use cycling to help improve their health.”

Today, a few miles from the organisation’s West End hub, Bike For Good are hosting one of those initiatives: a communal ride for residents at a local rehab centre. The group pick up bikes, helmets, and make their way to a local park to carry out safety checks. Once that’s done, they zip off towards the canal. One rider tries, without success, to instigate a slow race to the bemused laughter of the group. 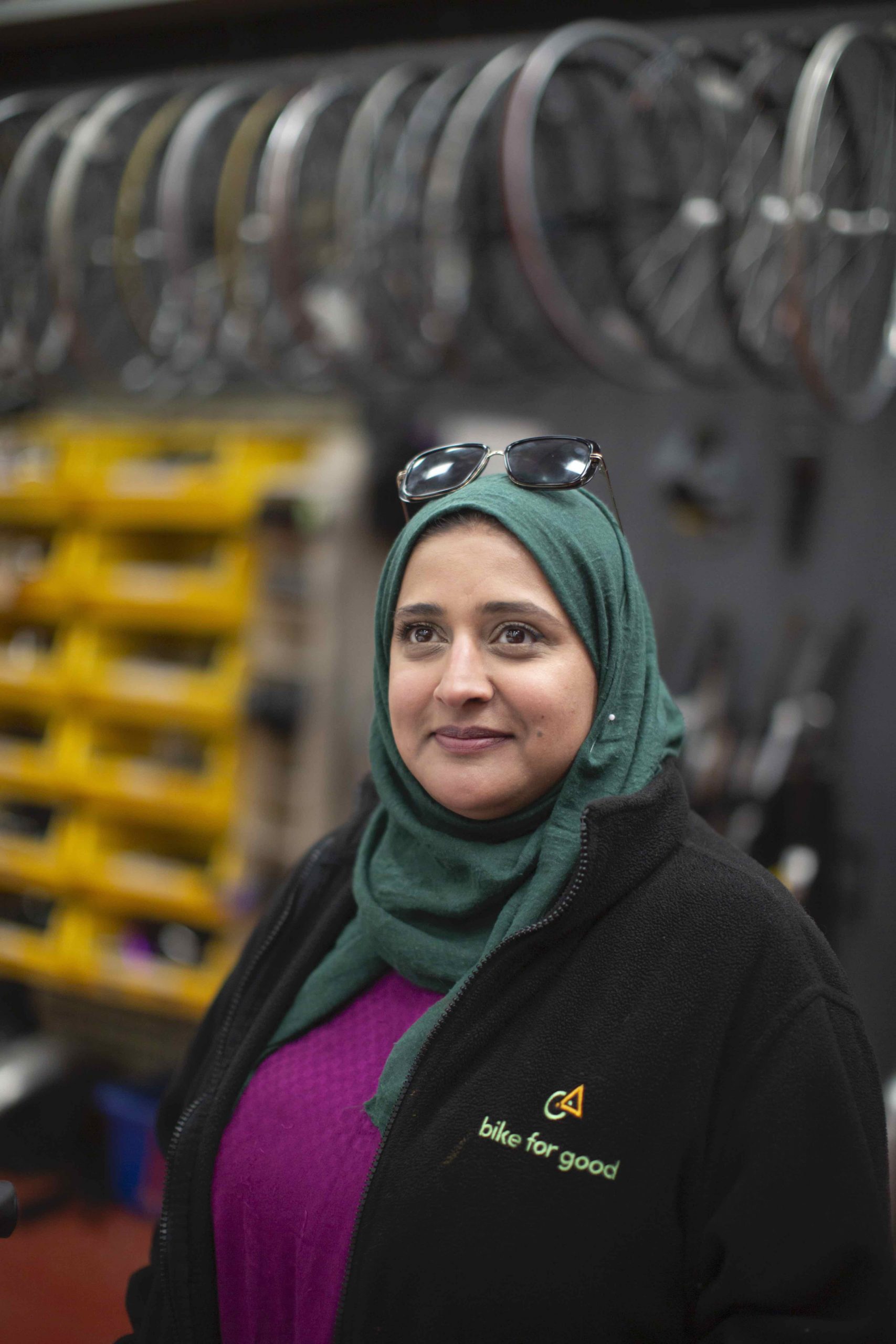 This programme is one of dozens that the organisation runs across the city. Shgufta Anwar, who’s here today, heads up the Southside hub, which is located in the Govanhill area of Glasgow. “It’s a really really diverse community, there’s something like 80 languages spoken there,” she explains.

“We do a whole host of initiatives here. We have a women’s programme where we’ll do drop-in rides and lessons. We have a project called Govanhill Gears which is working with young people. We work with the Roma community getting them out on rides and involved in maintenance. We also have a programme for older people, we run fix-your-own-bike sessions, as well as – in normal circumstances – film nights and outreach events.”

Shgufta has been with the charity for four years and has overseen the expansion of the hub and its activities. She says that the women’s programme is the initiative she’s most proud of. “Women have so many barriers to cycle, and if you’re an ethnic-minority woman you have even more barriers – whether it’s cultural, religious, or anything else, it can take a lot to come on board.” 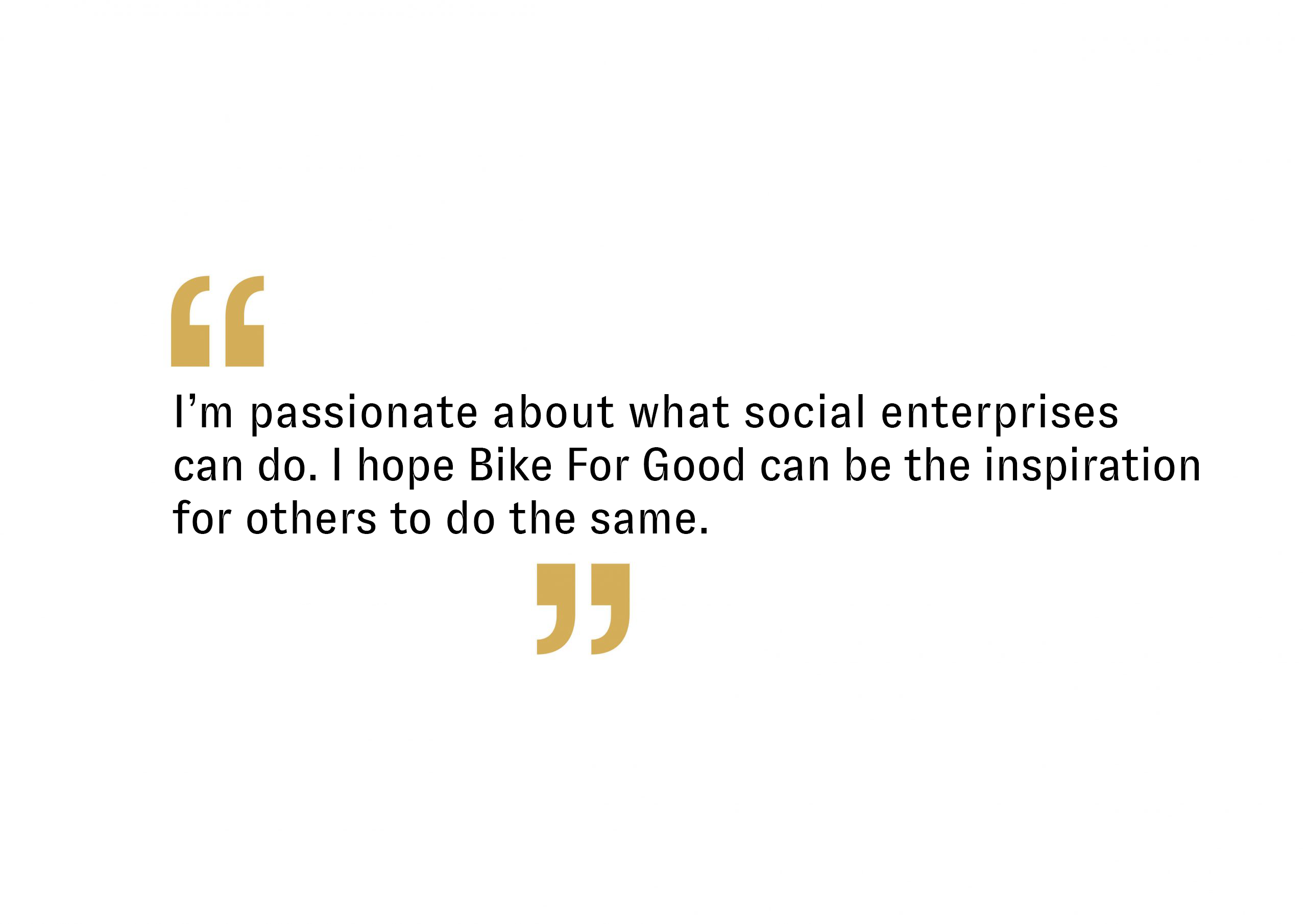 “We offer women’s only rides to help make them more comfortable as well as our maintenance programme, ‘Spokes not Blokes’. We knew from focus groups that there was a real demand for this from women and non-binary people… they need a dedicated space that is designed by women and delivered by women to nurture and encourage them.”

It’s examples like this that show how Bike For Good has made huge leaps in reaching communities normally shut out from cycling. But it wants to go even further. The organisation is using a grant from 99designs by Vistaprint to help create a new bike subscription service, which it hopes will allow it to do just that. 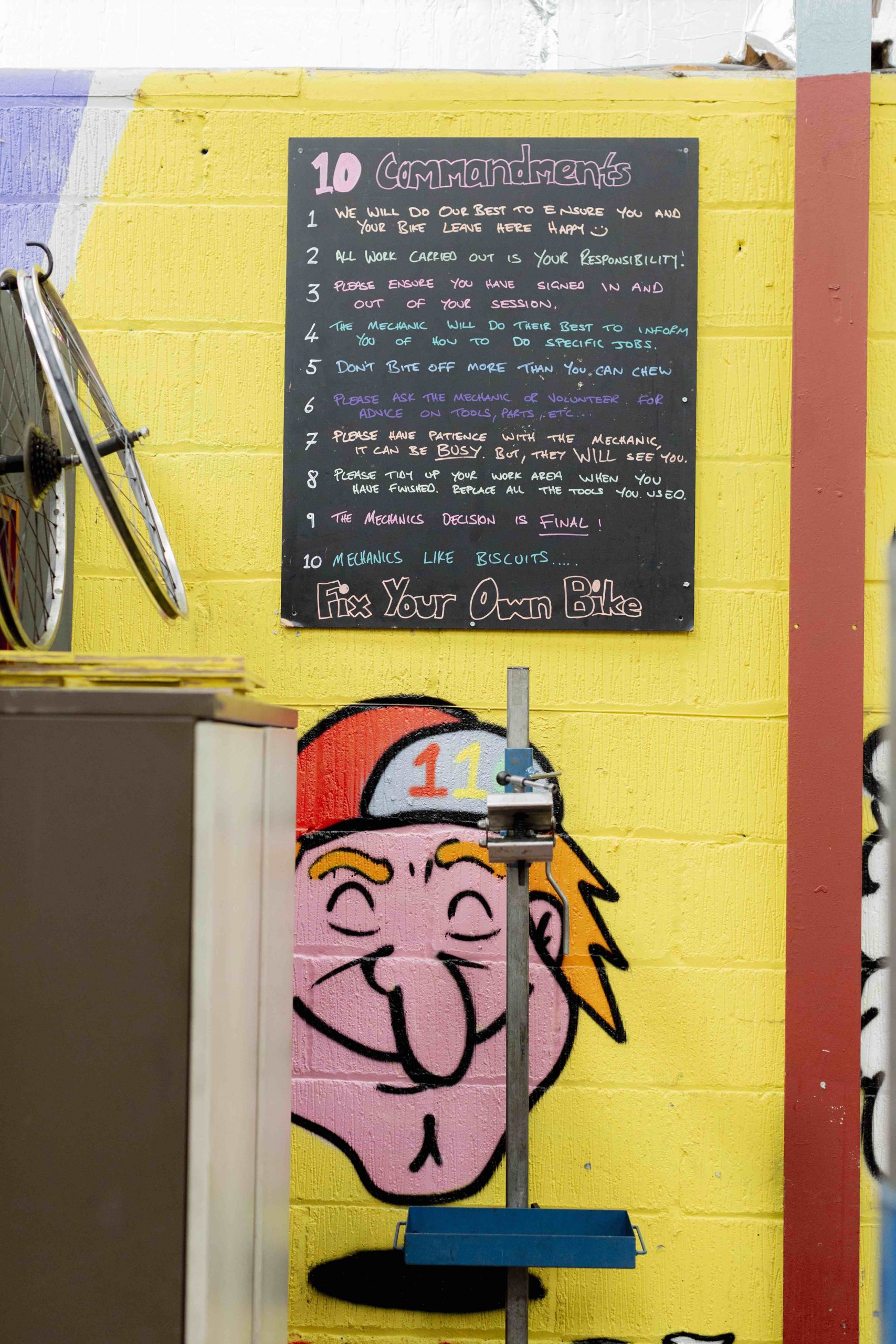 While it’s still in the early days of development, the service will allow people to pay a monthly subscription and receive a bike and safety gear in return, as well as maintenance services provided by the charity’s mechanics. The service will be accessed through an app and will include the ability to pay a subscription forward – which would mean donating a bike to someone in need, such as homeless people or asylum seekers.

Like with everything that Bike For Good do, the visual identity will be a key component. “Design is really important,” says Greg, “because when you do the visual identity, it shows the values you have as a company. The colour you use, the font you use, everything – it creates a conversation with the customer.”

With Bike For Good embarking on its second decade, the subscription service can be seen as an indication of the new spaces the organisation wants to reach. For founder Greg, it could serve as the catalyst for greater connectivity among similar schemes in the UK. “We want to work with other bike social-enterprise projects, we’d like to see greater collaborations, potentially create a national partnership,” he says. 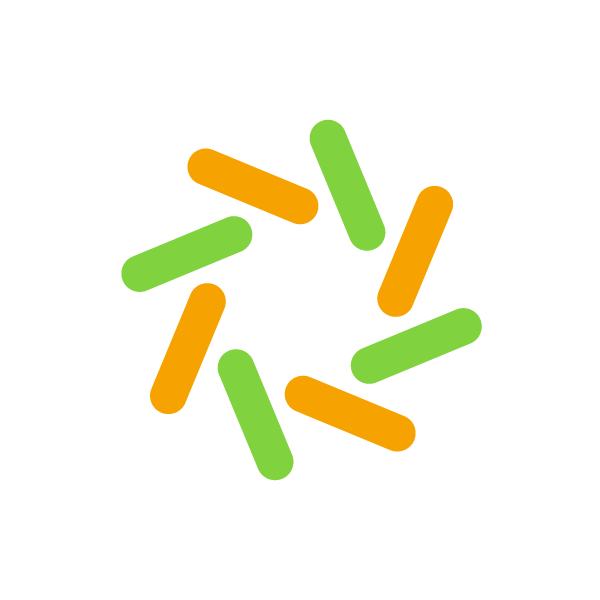 Design by Akihiro Takeuchi on 99designs by Vistaprint.

The logo that the subscription service will use, which also comes courtesy of 99designs by Vistaprint, celebrates that thinking. For Akihiro Takeuchi, the designer responsible, it was about conveying a circular economy, while also speaking to the widest possible audience. “I chose geometrical – in other words ‘neutral’ – shapes because the brand [needs] to approach people from diverse backgrounds,” he says.

It’s been decades since a younger Greg took a tumble and swore off cycling for life. In that time, he has not only discovered a love of cycling, but helped set up an organisation that has brought that joy to thousands of others. Thanks to Bike For Good, cycling is more accessible, as are the benefits that it brings.

“The thing I’m most proud of is starting and growing a social enterprise,” says Greg. “I’m passionate about what social enterprises can do. I hope Bike For Good can be the inspiration for others to do the same.” 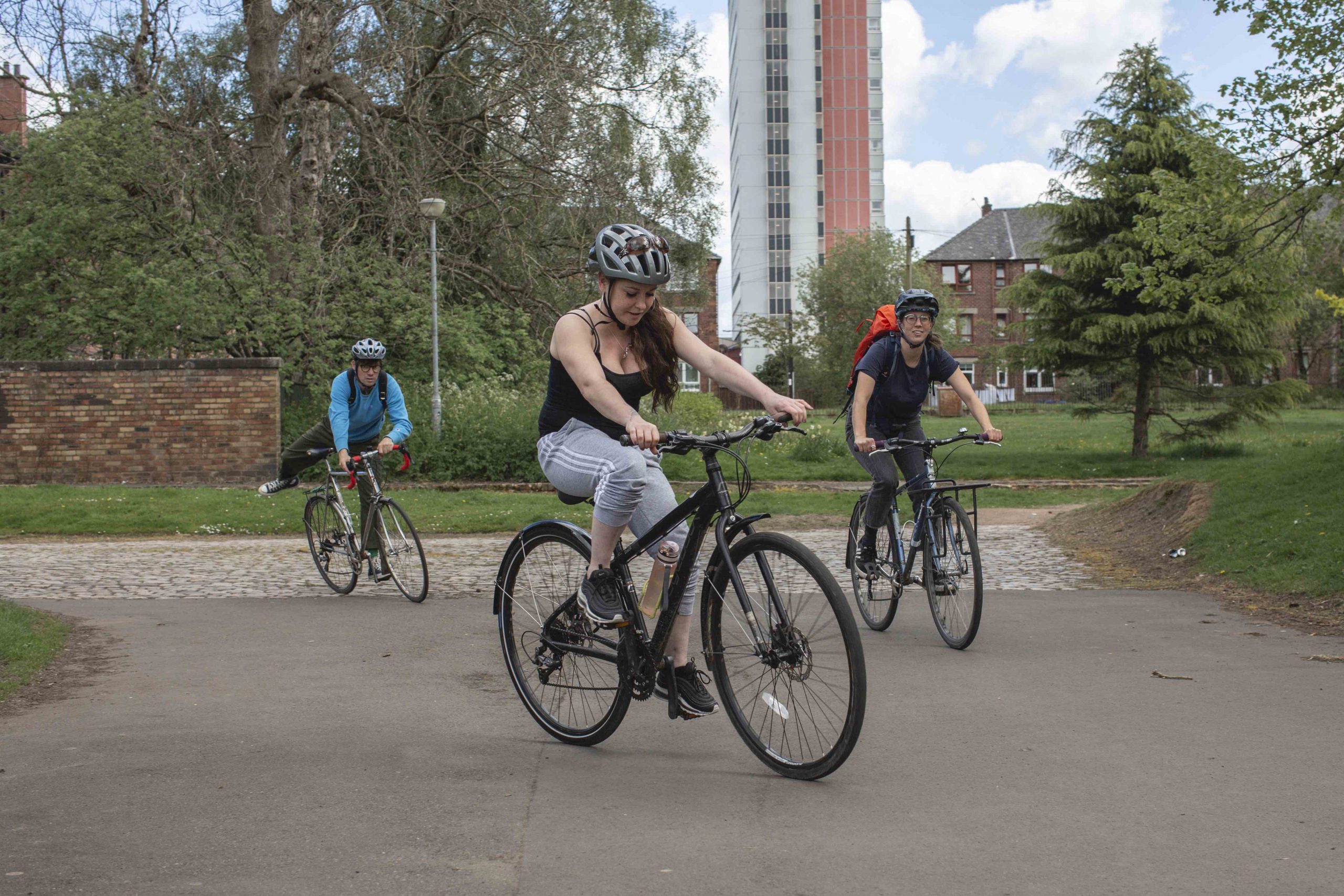 The new Bike For Good logo was created by Akihiro Takeuchi on 99designs by Vistaprint.

Linkedin
RELATED ARTICLES
OTHER ARTICLES
The musician, DJ and founder of Monika Enterprise reflects on a career defined by revolution and rule-breaking.
A new book traces the legislation’s tumultuous history and the lasting impact its had on LGBTQ+ activism today.
From Brooklyn gang members, to Welsh miners and the residents of East Harlem, Bruce Davidson used his camera to shine a light on the most marginalised.
From the queues outside to the last ones standing, Francesco Mellina’s new photo book follows a night that has gone down in the Northern-Soul history books.
Photographer Melanie Nissen recalls capturing the characters, fashions and rarefied chaos of a rapidly-expanding set of punk bands who helped to redefine the genre.
With abuse of call-centre staff on the rise, many are now speaking out about the hostility they’ve faced.