Outdoor / Adventure / How the outdoors helped us reconnect with our hometowns 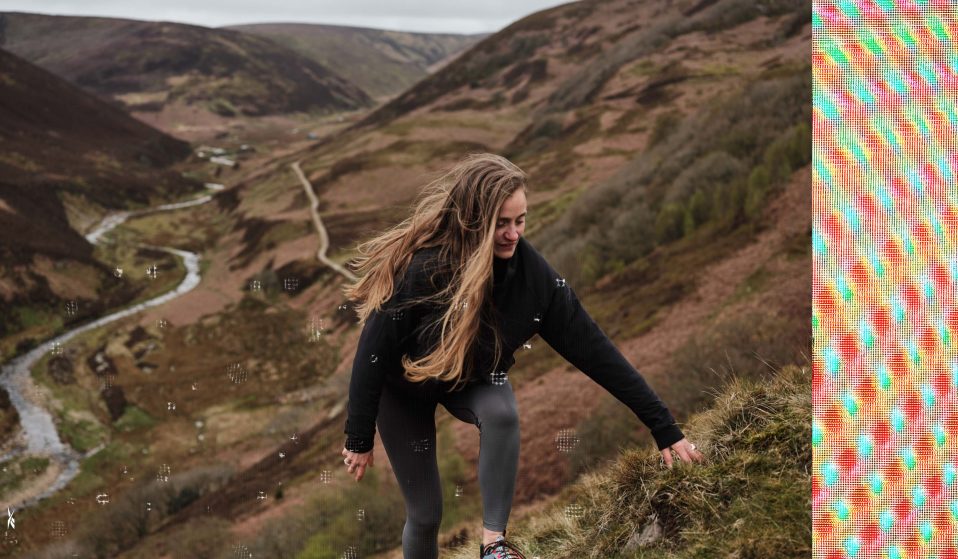 Losing yourself in nature can unlock a brand new world. In the first profile from Nano Adventures, a new editorial series in collaboration with Reebok, yoga teacher Rachel Walsh recounts how outdoor exercise helped bridge her transition from London to Lancaster.

Rachel Walsh was born and raised in Lancaster, a small city in northwest England. But once she left, she swore she’d never move back. Rachel didn’t just hate the place, she hated the version of herself she’d been when she lived there: bored, tetchy, teenage. At the first chance she got, she fled to London, where she thrived immediately.

A few years ago, however, the cracks in that setup began to appear. First, Rachel experienced a serious health scare. Shortly after that came Covid-19, which threatened to destroy the yoga business she’d built from scratch. Not only could she no longer travel for work, but she was temporarily homeless, having sublet her apartment after making plans to be abroad.

Aged 30, she had no choice but to move back in with her parents, in the place she thought she’d seen the back of. The shock of this hit her hard. “There was this real sense of impending doom,” she says. “You know, ‘We’re going to be locked down. I’m leaving London. My career’s over. I’ve got to move back in with my parents.’”

As if the pandemic wasn’t frightening enough, Rachel was reckoning with what felt like a real assault on her identity. “At times I thought: ‘God, who am I?’” she says. “There was a feeling of regression and loss of freedom. I felt confronted by parts of myself that I thought were gone – but they were just hiding in my bedroom in my parents’ house.” 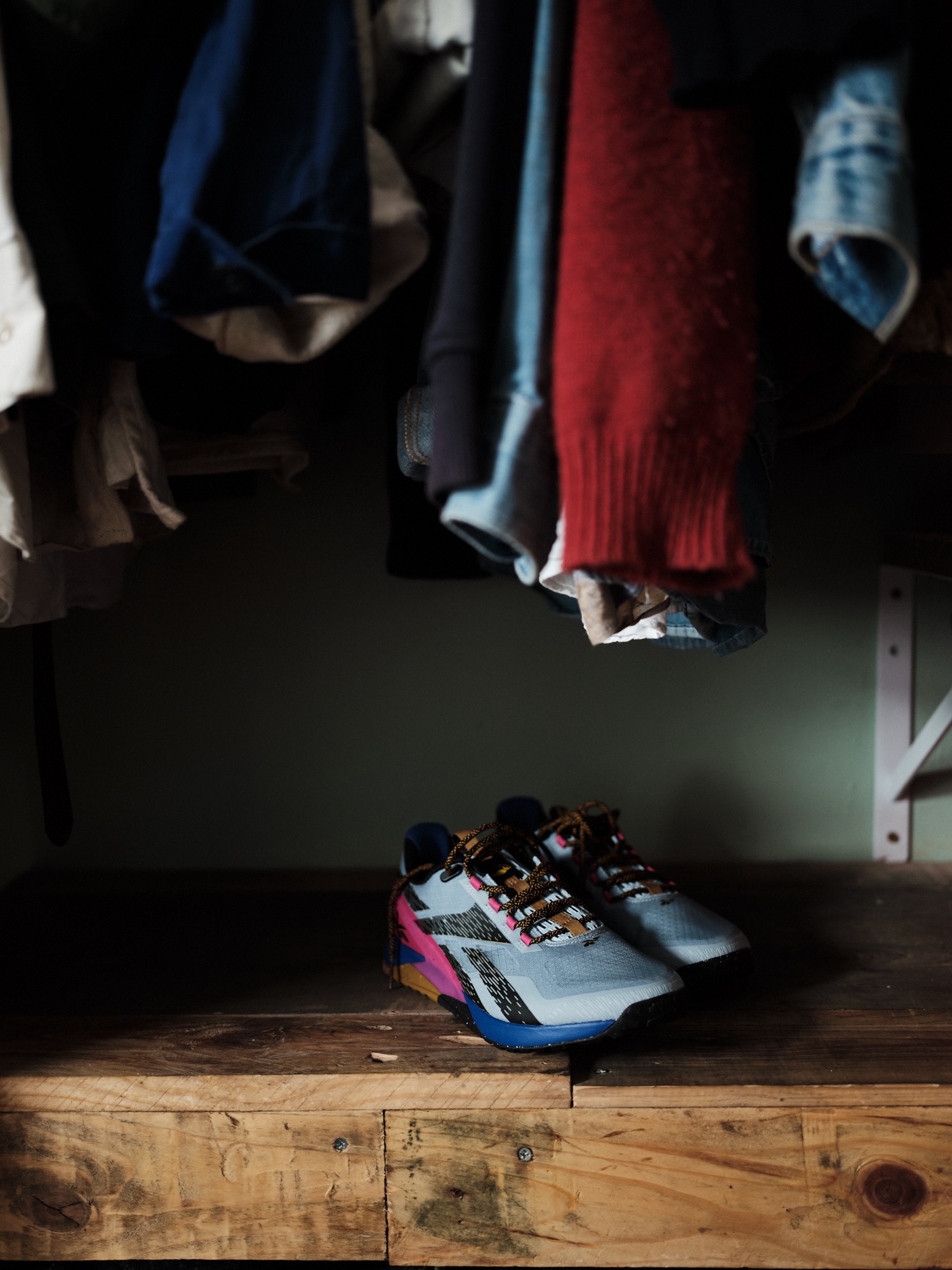 These emotions were compounded by a new and acute sense of loneliness. “I’d lived in Hackney Wick for nearly 10 years, where you’re never alone – it’s like being at a festival all the time. But then, suddenly, I had no friends around. Everything was flipped on its head, it was like the death of who I was. It was very dark at points.”

Rachel kept up with her daily yoga practice, which she says stopped her from totally crumbling. When it comes to yoga, she has always been less about spirituality and stretching, and more focused on deep meditation: she describes her style as “physically demanding” yet “fluid and playful at the same time”. 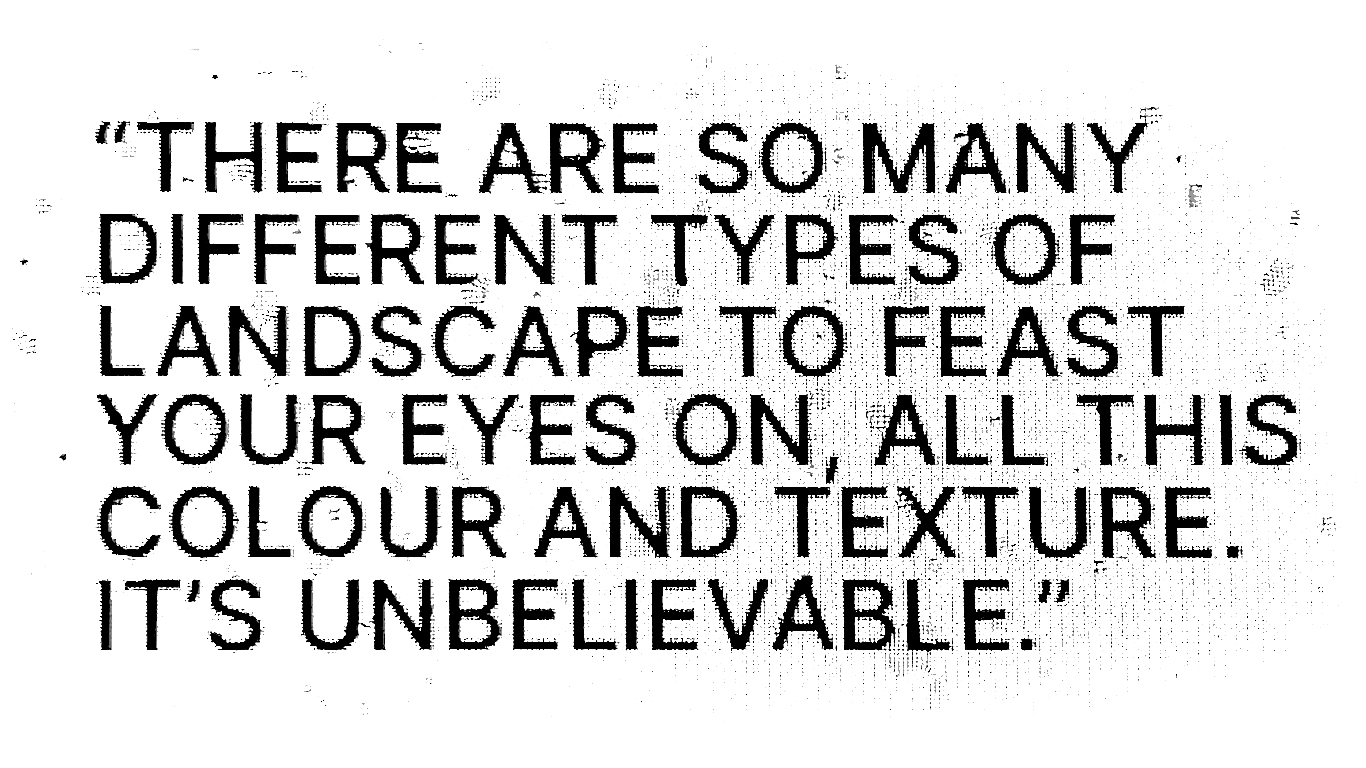 While yoga helped ease the transition, it was only when an old friend – who later became her partner – introduced her to the wonders of the local countryside that Rachel started to feel genuinely happy to be back at home. “[Due to lockdown], there was nowhere to go and nothing to do, so we just did loads of hiking and wild swimming. This love affair began, both in – and with – the Lancashire countryside.”

Rachel’s parents were not into the outdoors. As a child she’d never explored or appreciated her local area in this way. She’d never been to Clougha Pike, the summit of a stunning heather moorland (“It’s literally a five-minute drive from the town centre”). Nor had she ever been swimming in the River Lune, which flows through a valley of deep green unspoilt countryside (“It’s gorgeous. There are paintings of that view in the National Gallery”). 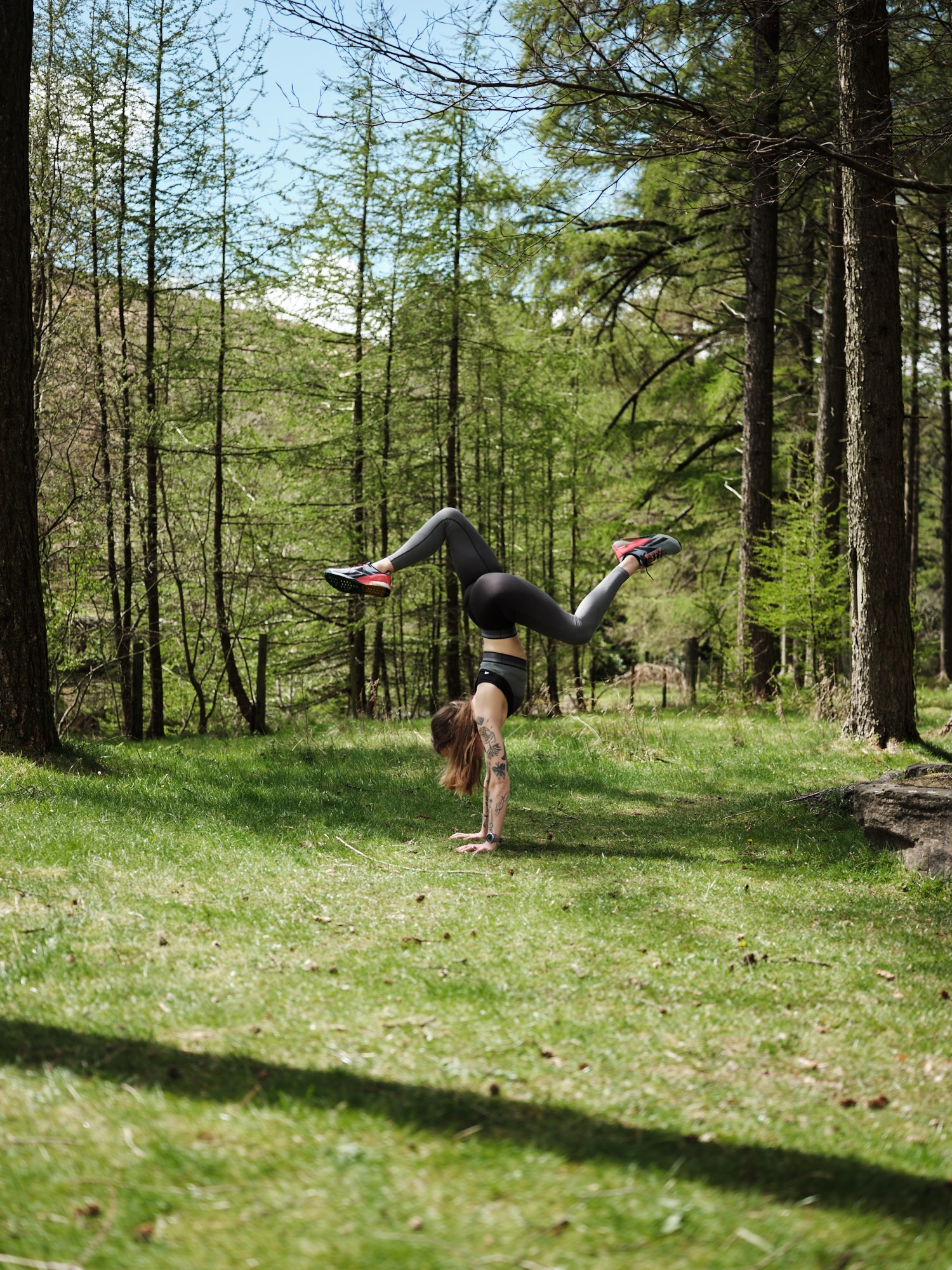 This reimagining of her hometown as somewhere beautiful was an incredibly special experience for Rachel. “I’d actually call it a wonderland,” she says. “There are so many different types of landscape to feast your eyes on, all this colour and texture. It’s unbelievable.”

The more she tuned in to her surroundings, the more she got back. She noticed how the light pouring in through certain old trees looked best at lunchtime. She observed how the total absence of traffic noise at a stream meant the only sounds were birds, water and wind. Before long, she became adept at avoiding stabs from the orange spikey brambles at her ankles and enjoyed regular scrambles over a stretch of rocky terrain that reminded her of photos of the moon. But most of all she loved the sweeping views from the stile at Clougha Pike that, on a good day, stretched all the way to Morecambe Bay and the Lake District. 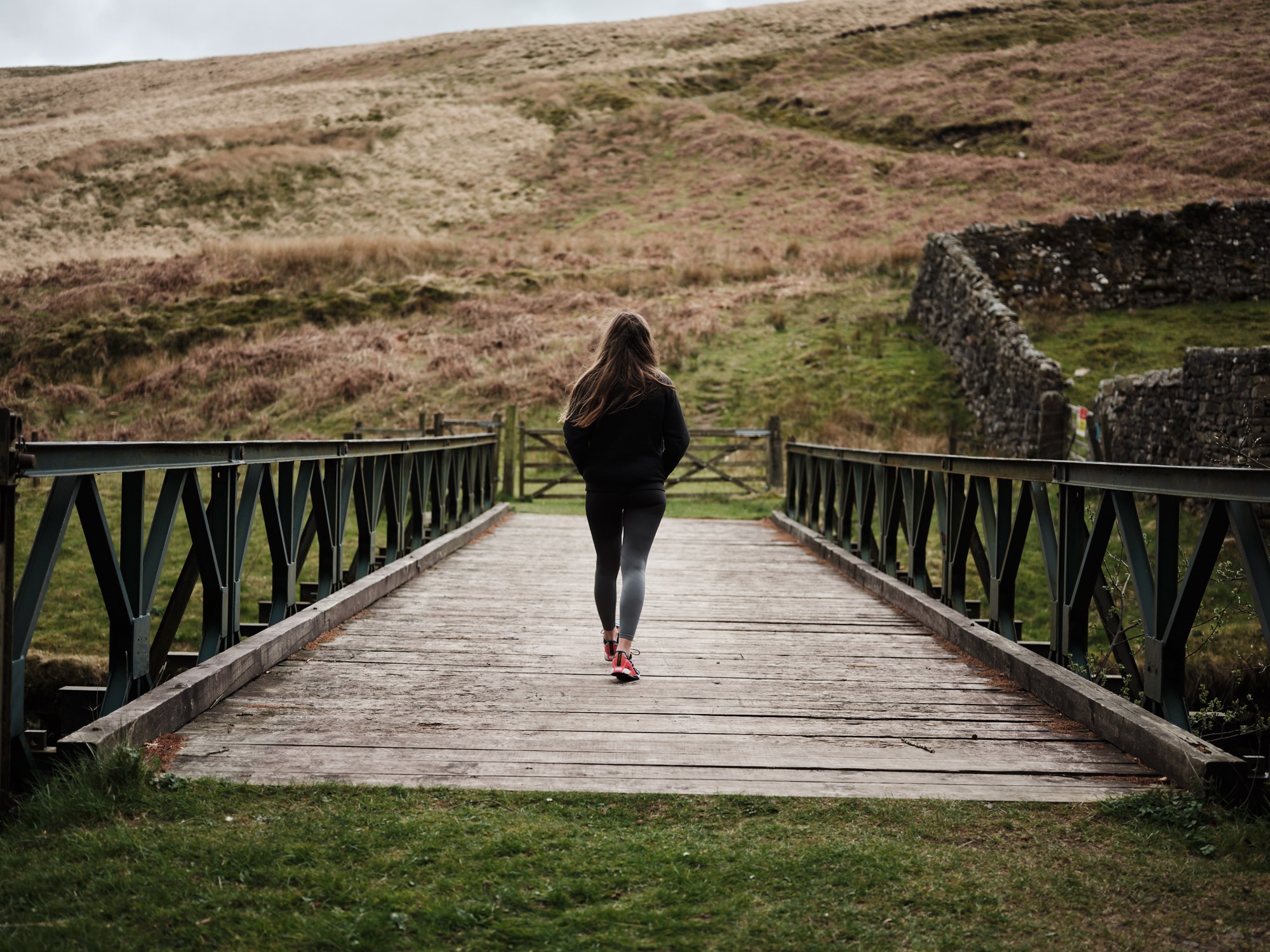 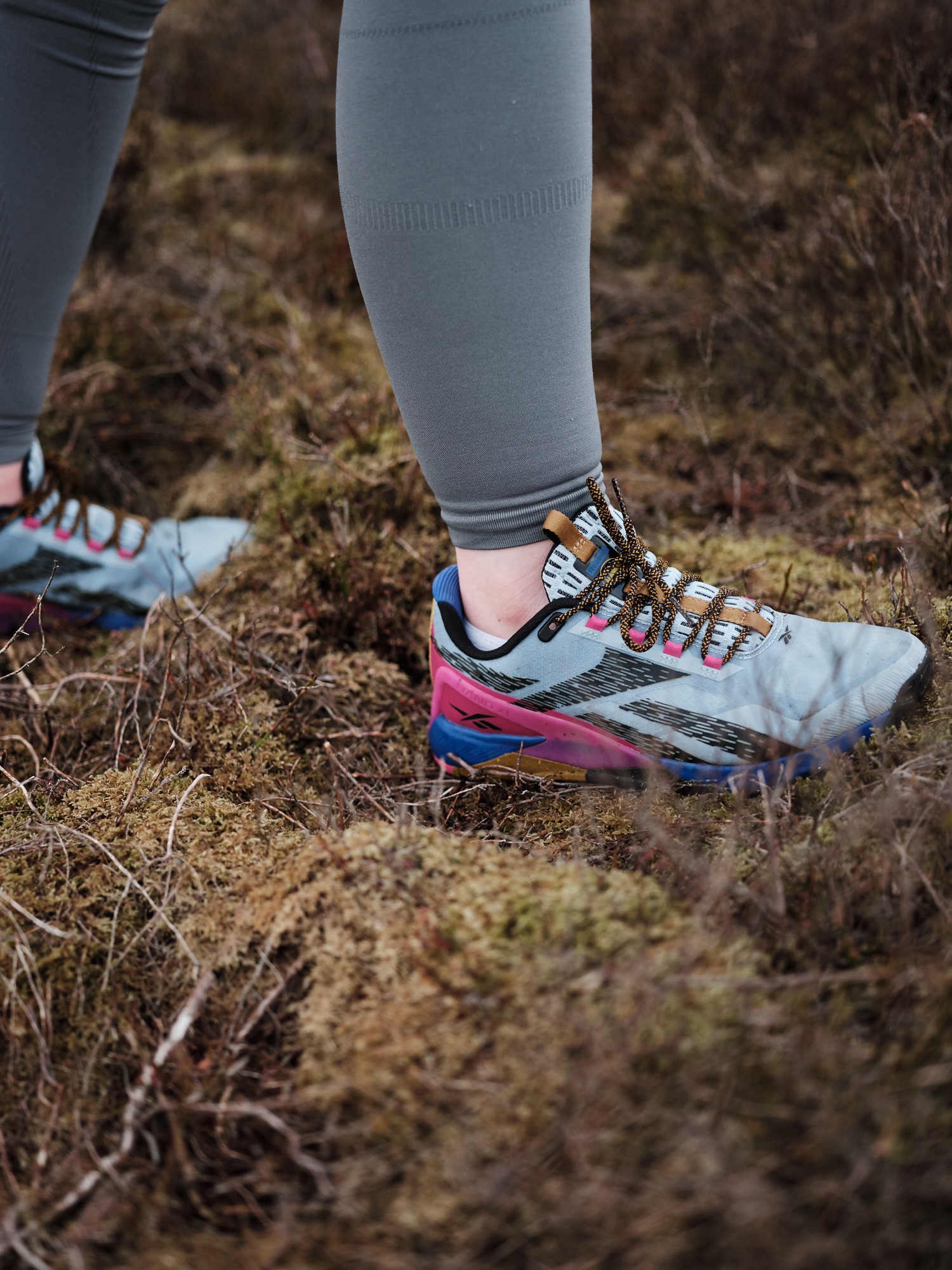 Rachel now likes to get outside and into the local nature at least twice a day, which was not something she ever considered when she lived in London. She says she can feel irritable if she’s stuck indoors on a screen for too long. “I’m someone who belongs outside – it feels good,” she explains. “I don’t even really care about the weather, I’m happier in the elements and it’s better than being indoors. There is adventure on your doorstep every time.”

At the start of the first lockdown, Rachel came home begrudgingly thinking she’d be back in London a few weeks later. Over a year later, she has put down roots to make that return permanent. “I wouldn’t be open to living somewhere where I couldn’t be outdoors. I can’t live without it now,” she says. “That’s where I prefer to do my soul-searching, with the wind in my face. Whereas before, it all happened on a yoga mat.” 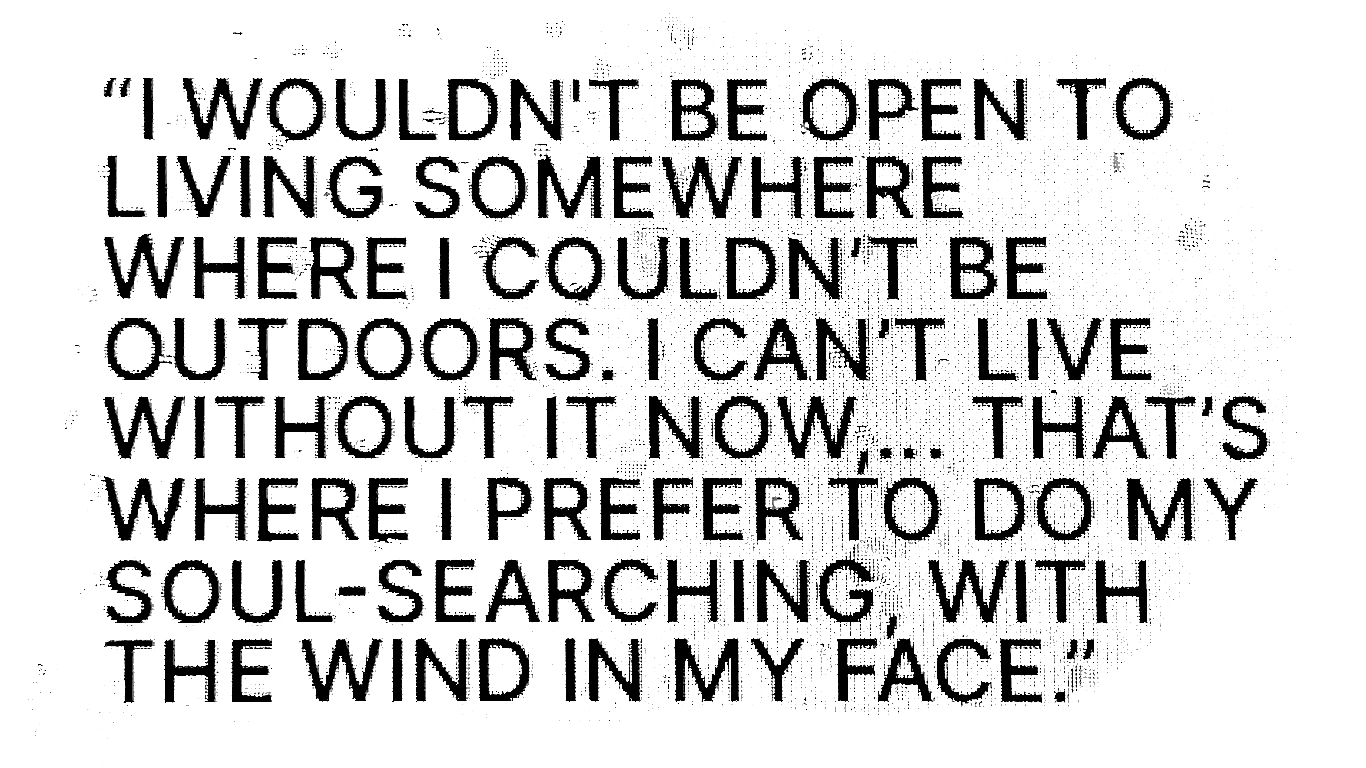 In many ways, she’s gained a lot. But it poses the question: has she lost anything in the move? In her response, Rachel is typically thoughtful. “I definitely lost the person I was before, who was run ragged by working too much to pay for a very expensive flat that had a cockroach infestation! That person’s gone, thank goodness. But no, I haven’t lost anything that I want back,” she says.

“I had this idea when I was younger that I just needed to get out and start living my life. But I think I’m living my life more now than ever. Discovering new things, watching the landscape change, seeing lambs and calves being born… it feels like I’m part of something tangible and real.” 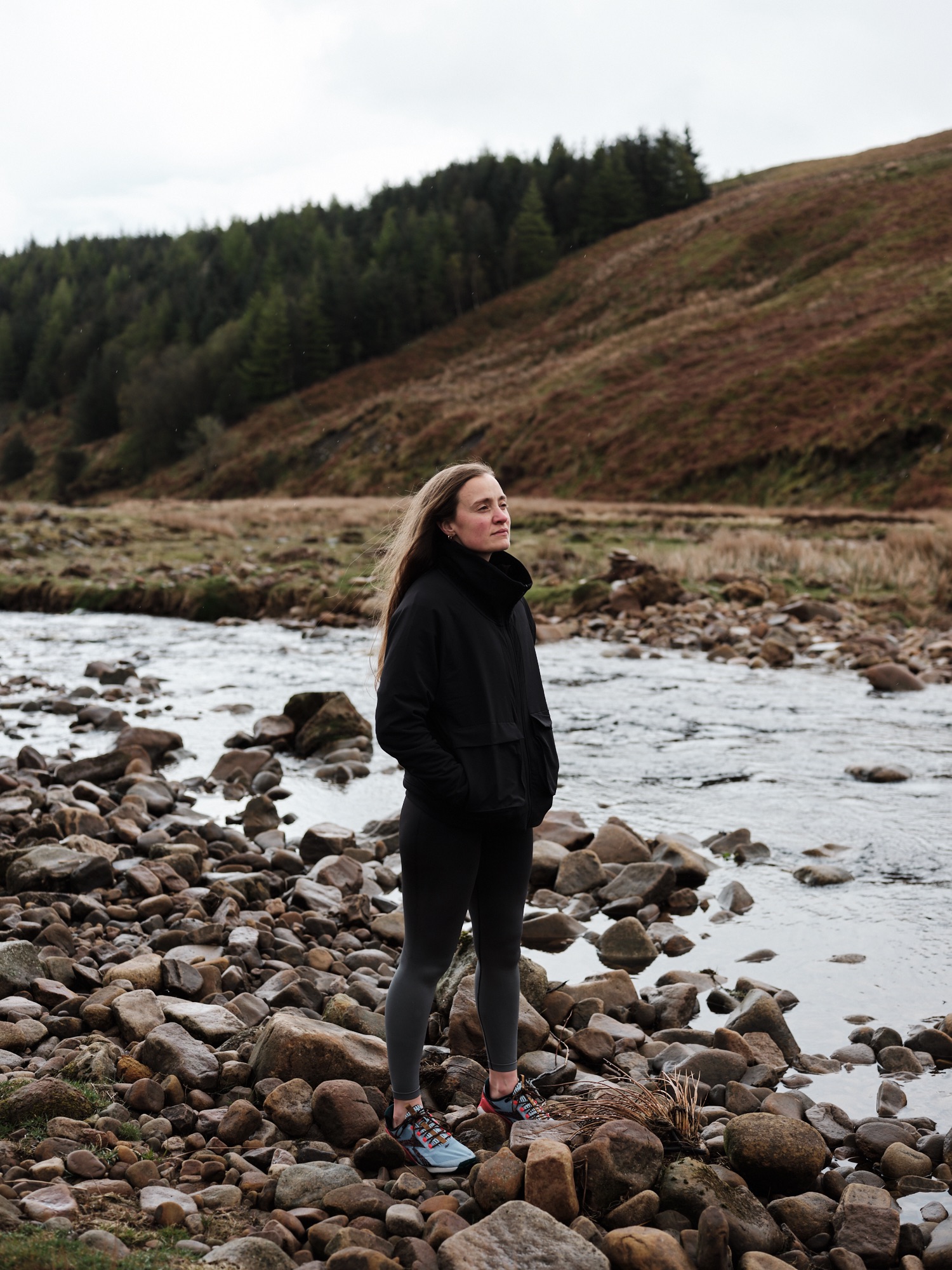 If you are thinking about spending more time outdoors, you can learn more about the innovative Nano X1 Adventure Rachel wears here.

Linkedin
RELATED ARTICLES
OTHER ARTICLES
Freddie Miller’s new series of photographs investigates who today’s trainspotters are and what drives their unfettered enthusiasm.
The author discusses the all-consuming nature of heartbreak, and turning the experience into an incisive exploration of love and loss.
Thomas Hoepker‘s images taken during a road trip across America provide a searing social commentary about a divided country.
Photographer David Hoffman recalls documenting the extreme wealth inequality around Tower Hamlets and Hackney int the 1980s.
The overlooked story of Leicester’s inaugural Pride march is a reminder of the power of collective resistance in the face of far-right bigotry.
The last few years have seen an increase in LGBTQ-led initiatives to feed the hungry, with many finding ways to stay afloat despite the challenges.