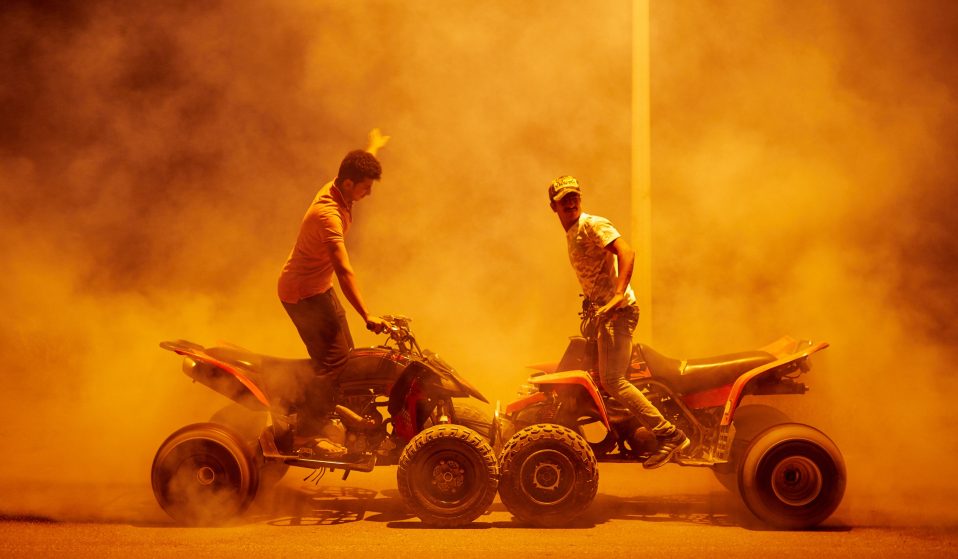 Meet the Bousher Bike Life Crew: a daredevil collective on a mission to take back the streets – then their city.

In Muscat, a group of teenage daredevils have responded to the disappearance of public space with four-wheeled frenzy. Meet the Bousher Bike Life Crew: a roving collective on a mission to take back the streets – then their city.

It’s spring in Oman – the time of the year when the relatively pleasant temperatures start to give way to relentless desert heat. On this particularly sweltering day, we’re in Bawshar – a wilayat (province) in Muscat, in the country’s northeast – and there’s dust in the air. It moves and billows across the apartment complexes and construction sites that surround the famous sand dunes. Here, it combines with beads of sweat, trickling along foreheads and down into eyes.

If you squint, you can just about make out where it’s all coming from: outlines of people, zooming up and down on bikes at the foot of one of the dunes. Because, as the sun begins to set on Thursday – the end of the working week – this is where crowds gather to thrash around on their wheeled weapon of choice. Between now and nightfall, dune buggies, bikes, quads and 4x4s will swirl around in harmonious, Mad Max style as they take turns on the steep, soft faces of the highest natural sand mound in Muscat City.

The Bawshar neighbourhood lies on the southeastern side of what is Oman’s capital, backed against a section of the country’s largest mountain range: Al-Hajar mountains. The dunes separate the neighbouring suburb and the east side of Bawshar: there are two main mounds of sand, cut in half by a major highway, a roundabout and a growing strip of apartment complexes and hotels. The largest of the two dune sites is double the size and height of the other, and more suited to experienced riders. From its highest point, there are incredible views of the city.

It’s here you’ll usually find the Bousher Bike Life crew. The youthful collective consists of around 30 active members, ranging from 12 years old to the late teens, all of whom hail from Muscat. They travel as a unit, meeting at the dunes before taking to the roads like a swarm of bees, meandering through traffic and pulling various different styles of wheelies. To the untrained eye, the young daredevils make an impressive and somewhat aggressive first impression: the bikes are loud, fast, and they seemingly operate without concern for other road users. It’s not until you spend some time with them that you realise they’re actually just a bunch of friendly teenagers, who are deeply passionate about what they do. 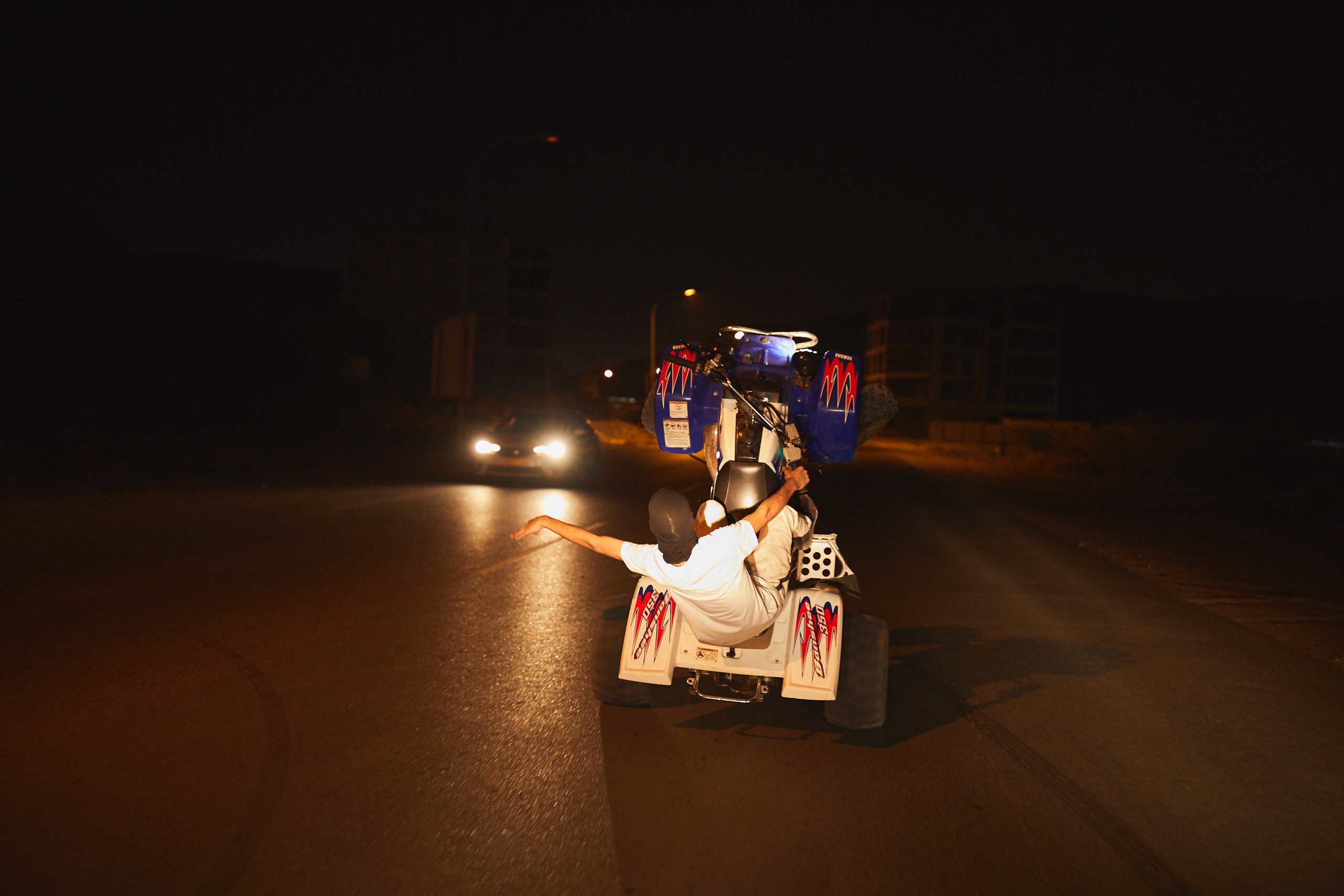 The Bousher crew – ‘Bousher’ being slang for Bawshar – view their scene as a space to exercise their collective love: going really, really fast on four wheels. But as rapid, large-scale development continues to envelop their stomping ground – the area is currently seeing an increase in construction in order to meet the demands of a growing population – they’re quickly running out of places to do it. For the guys, this adds yet another layer to the already complex adventure that is adolescence.

Right on cue, a distant roar announces the arrival of a Bousher rider. His head moves from side to side as he drives down the main road, scanning the scene for other members of his crew – or the police. After one loop of the roundabout he hits the throttle, drops the clutch, and sends the bike into a vertical stance. The two-stroke Yamaha Banshee snarls as he places one foot on the tail bar welded to the back of the bike and maintains a near-perfect 12 o’clock balance. He pulses the throttle, occasionally sending sparks flying as the back connects with the tarmac below.

This is Munther*, one of the most active members of the Bousher crew. There’s a lot at stake for him tonight, given that he’s been caught sneaking out by his dad a few too many times. He’s also been in trouble with the police before: another strike and he could be out for good. But he can’t keep away. “Doing wheelies takes out the stress of life,” he says. “It’s like a drug.”

1. The Bousher crew started riding at an early age. As kids, they’d hire rental bikes and zip around the bottom of the dunes, or take quads out with older members of their family during get-togethers. Having grown up around the dunes, riding is something they’ve known for as long as they can remember. Munther, for instance, is an integral member of the scene at just 16 years old. Faris, also 16, is another veteran. “I was introduced to bikes at the age of seven,” he says. “I’ve been riding ever since.” 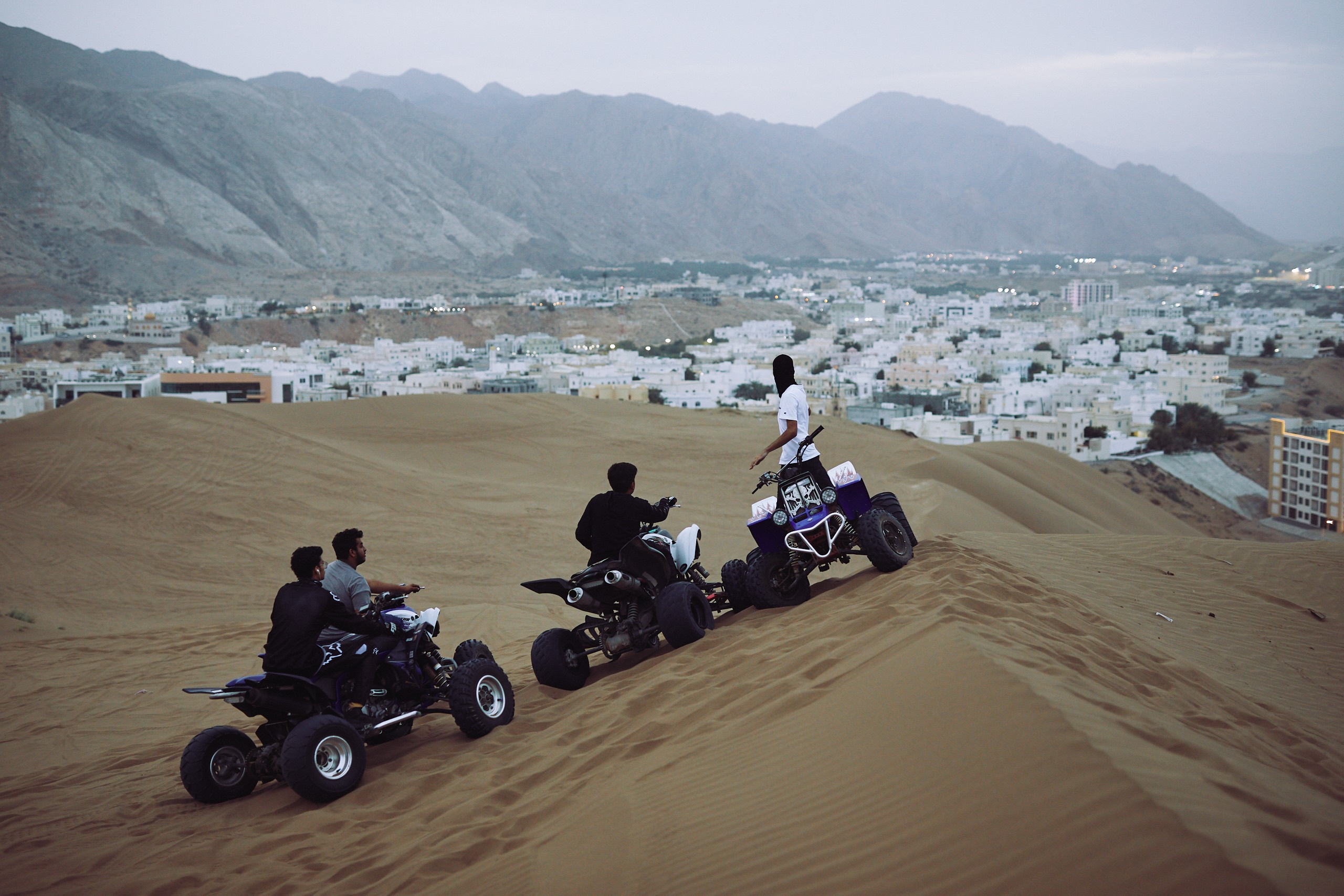 2. The Dune-bashing culture of Bawshar helps keep bike repair shops busy and booked up. Bike Planet, which the Bousher crew frequent most regularly, is one of many in the surrounding area: the staff here have known most of the guys for years, and have been helping them with tune-ups and fixes since they first started riding. These kinds of bikes take a battering at the best of times, but the way the Bousher crew ride – fast – ensures that they’re regular customers. 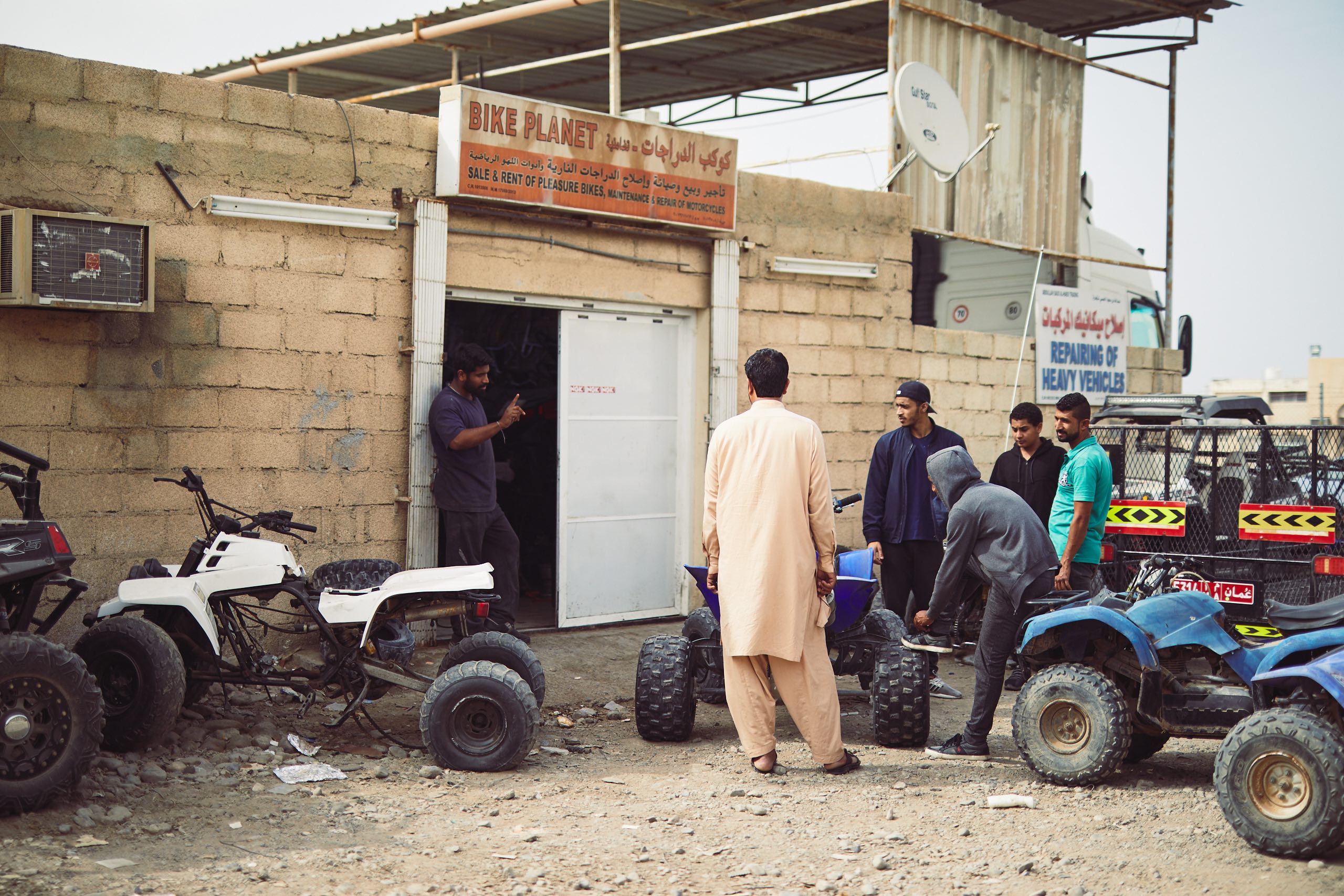 3. The northern part of Oman lies on the Arabian sea, which helped make Muscat City one the most prominent commercial trading ports in the Middle East. That said, the country didn’t see any significant development until the 1970s, when a coup put Sultan Qaboos bin Said into power and oil production became its economic backbone. Nowadays, vast wealth is synonymous with this part of the world, even though it’s obviously not something that applies to all. A good number of the Bousher crew do come from extremely comfortable backgrounds, though – as a result, they have been able to acquire some of the most powerful bikes on the market. 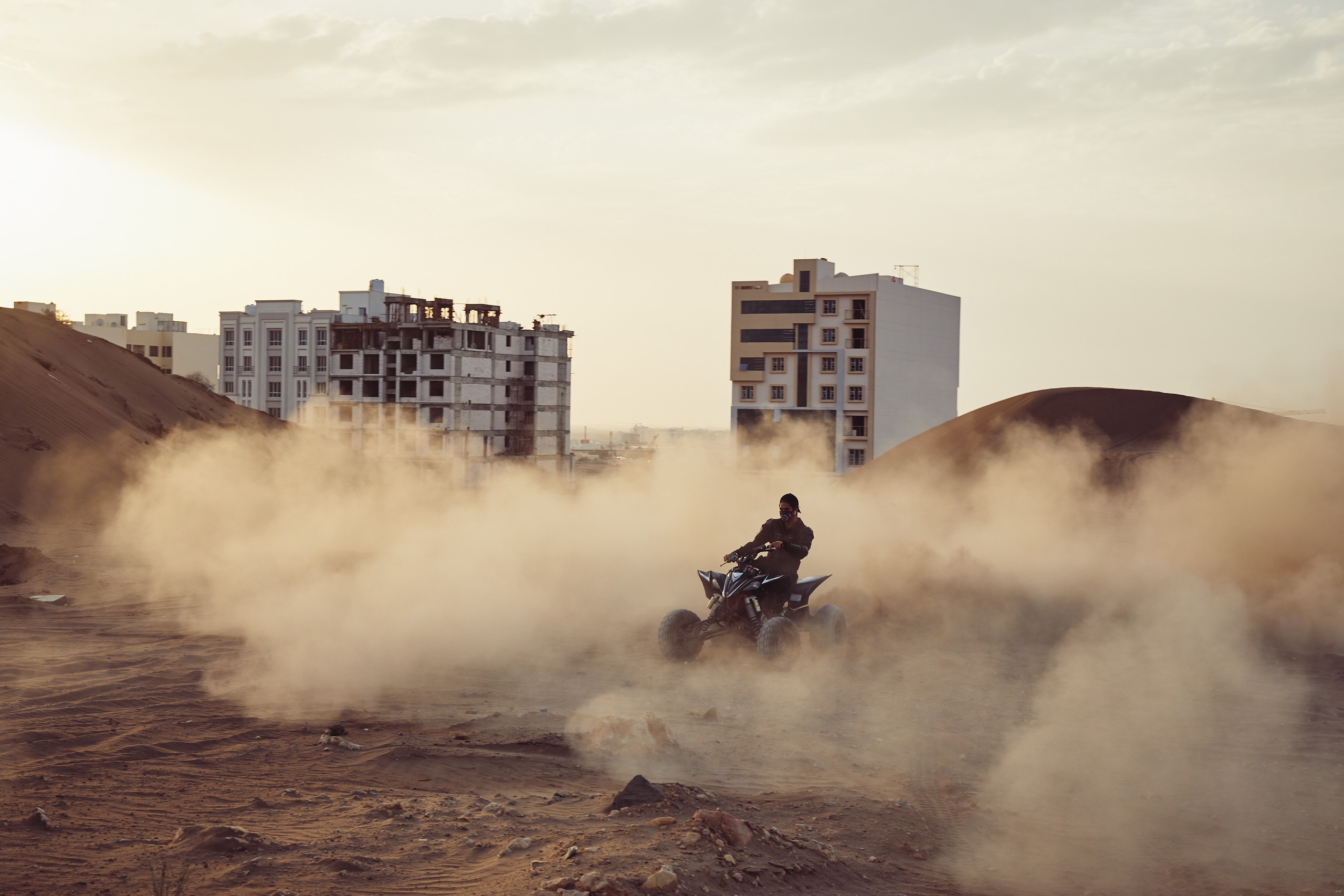 4. Munther had his first experience on a quad at the family farm when he was eight years old. He was hooked from the start and practiced on the same bike for six long years, practically wearing it out. His custom-built upgrade finally arrived when he hit 14: a bike he claims today is one of the fastest and toughest ‘ever made’. It was around this time he graduated from the dunes and began riding the streets. “I would find other guys on Instagram and arrange to do meet ups and ride together.” 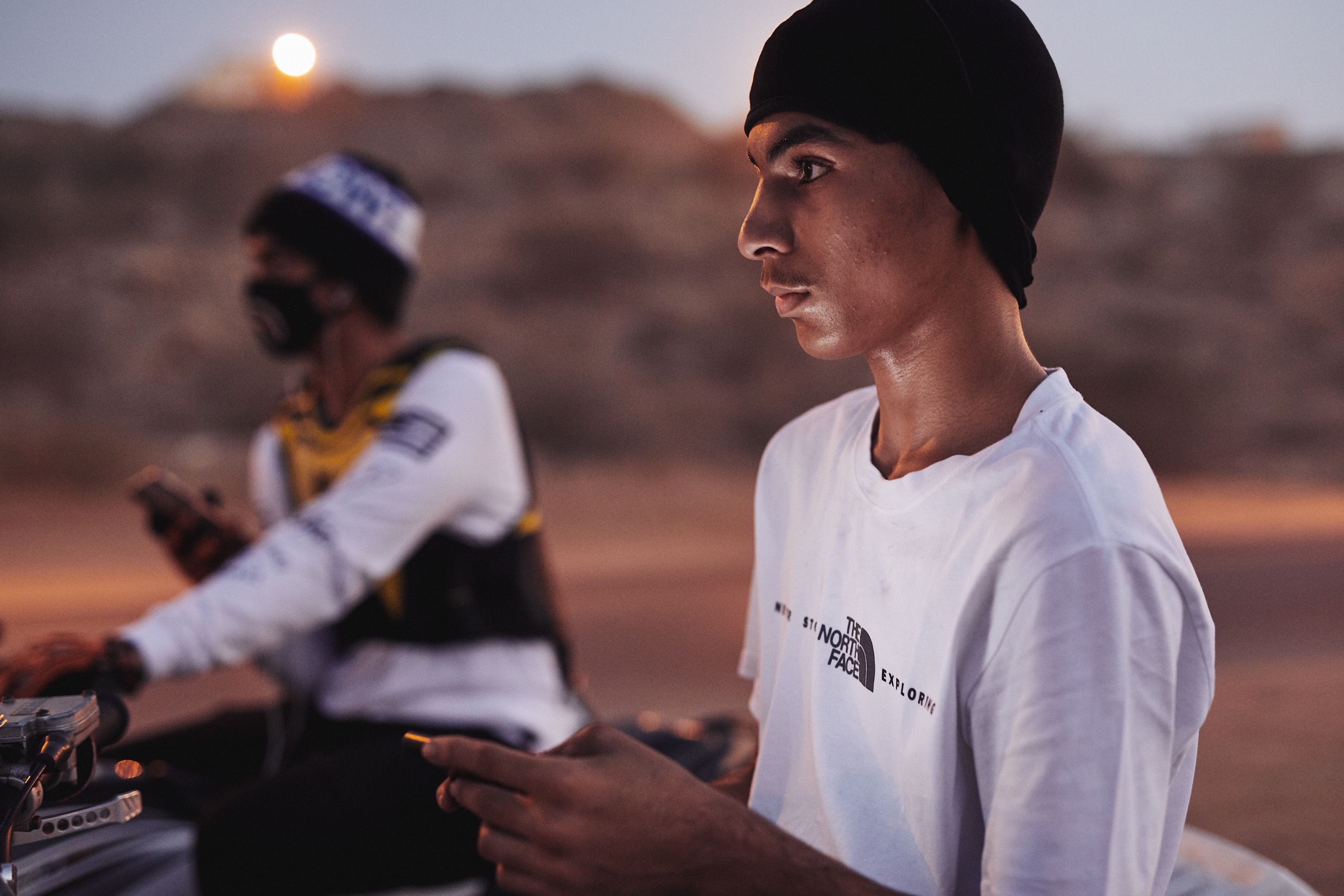 5. In Oman, children are encouraged to behave like adults from an early age. This is to instil a sense of responsibility and independence, which is evident among the crew. But street riding brings trouble, putting the culture at odds with familial – and societal – expectations. So why do the Bousher crew do it? The internet certainly plays a role. However, more significantly, the boys’ playground is shrinking: in the face of private development, public space is becoming rarer. Taking to the roads offers a very particular kind of resistance to the feeling that the city is being taken from them. 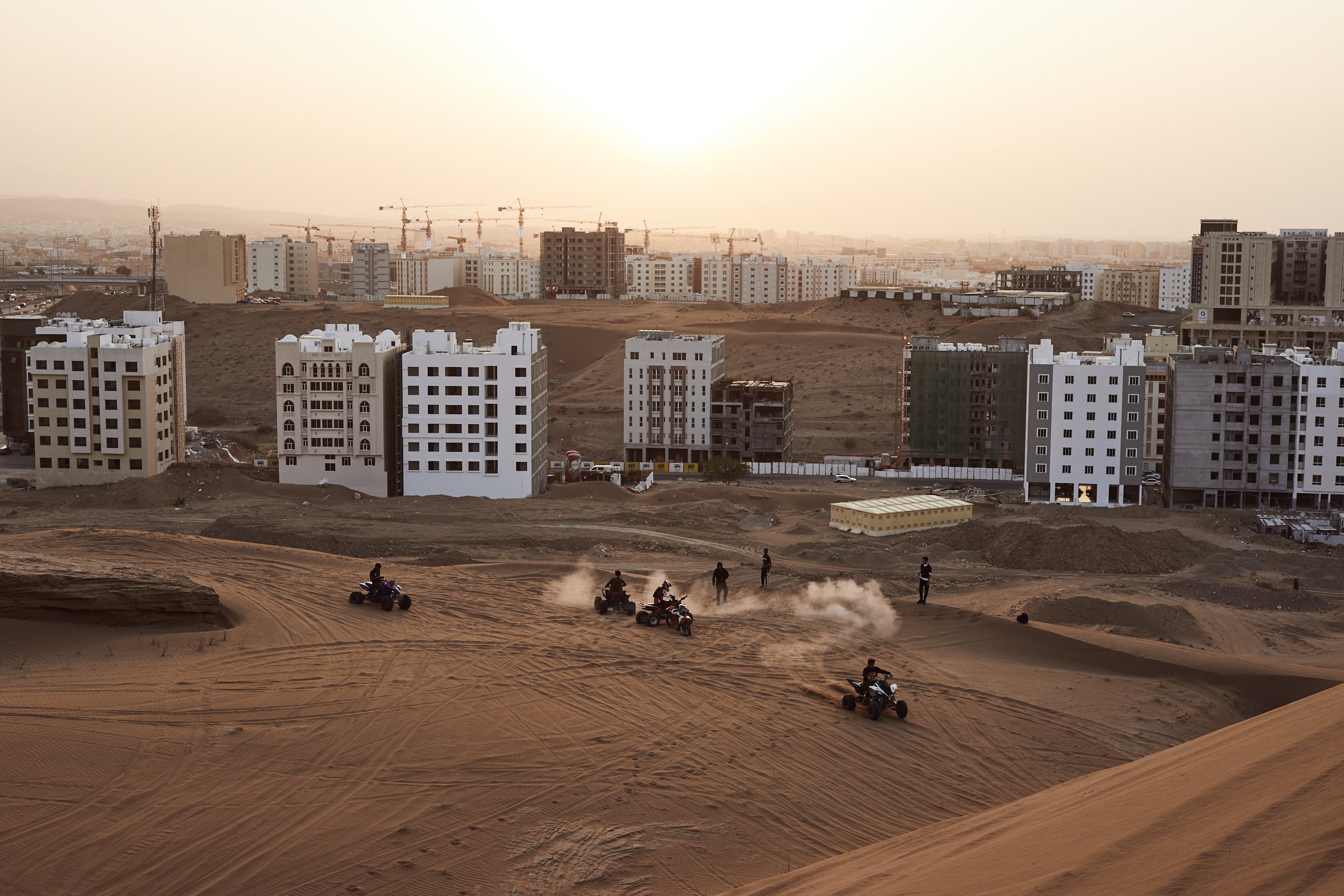 6. “You get to do what you want in your life – but the traditions are the most important in Oman,” says Hammed, a member of the crew who, at 18 years old, considers himself ‘semi-retired’. This is his way of explaining how the group often find themselves caught in the middle: on one side, they have the rules set by their parents; on the other, they have triggers and distractions that the older generation never encountered, funnelled down to them by way of social media. For him, there’s a certain disconnect – a clash – between young people and adults in the country, particularly when it comes to the question of downtime. 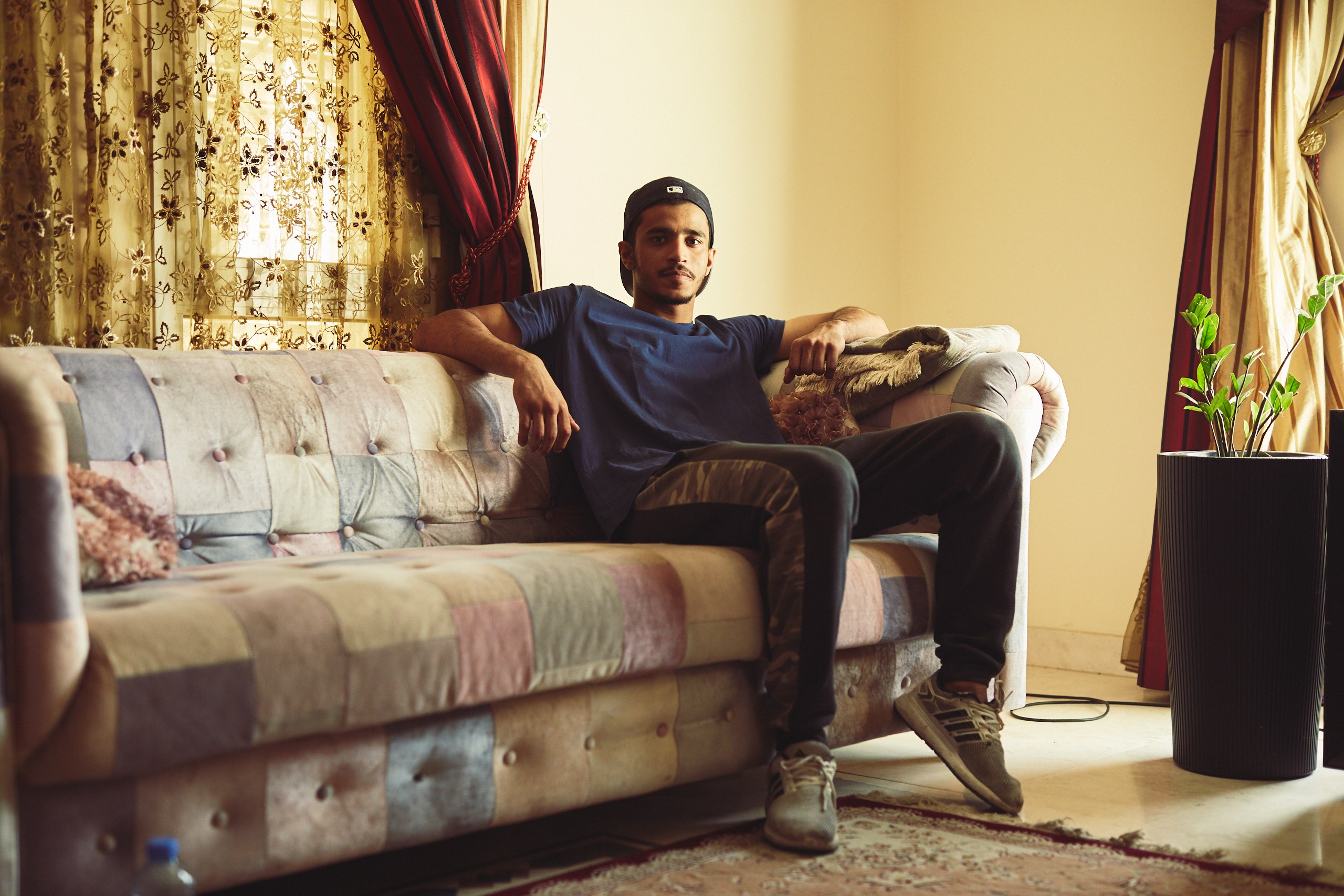 7. A typical ride sees the crew meet at the dunes before heading into town. Members of all shapes and sizes trickle into the area one by one. They start the night huddled together – phones out, soft drinks in hand – talking girls, Premier League football, and, most importantly, bikes. Once that’s over, they kick their machines into action and give them a warm-up: wheelies down the main road and laps of the dune faces to get the oil running hot. Then it’s time to go. 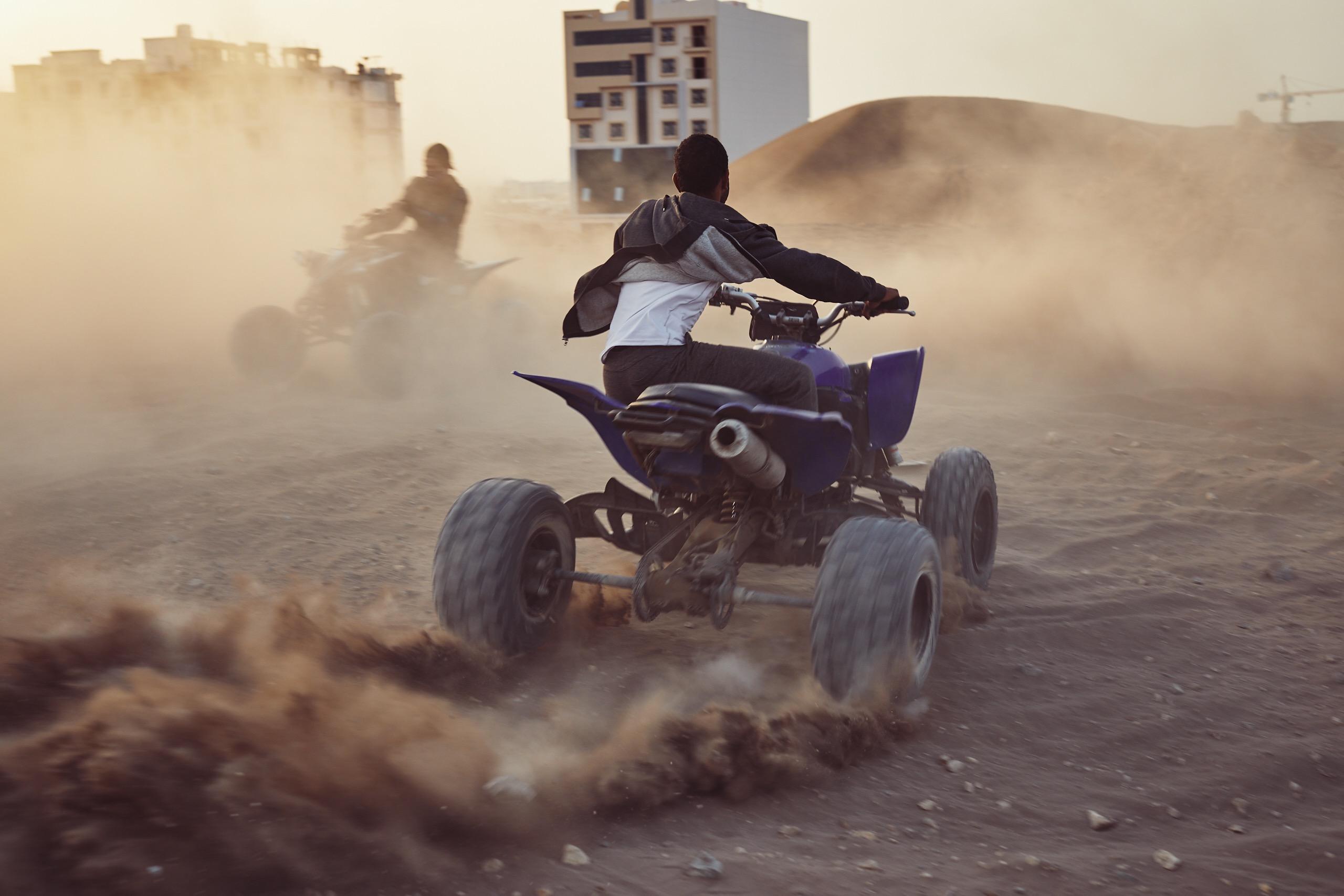 8. When it comes to routes, there are a few options to pick from, each entailing a different level of risk. It’s illegal to ride on the street, but some areas are easier to outrun the authorities than others (even though new rules dictate that police cannot involve themselves in chases, some still do). The pick of the areas to ride is Qurum, a high-end suburb with a victory mile in the form of a beachside promenade, making it the ideal place to flex for crowds. 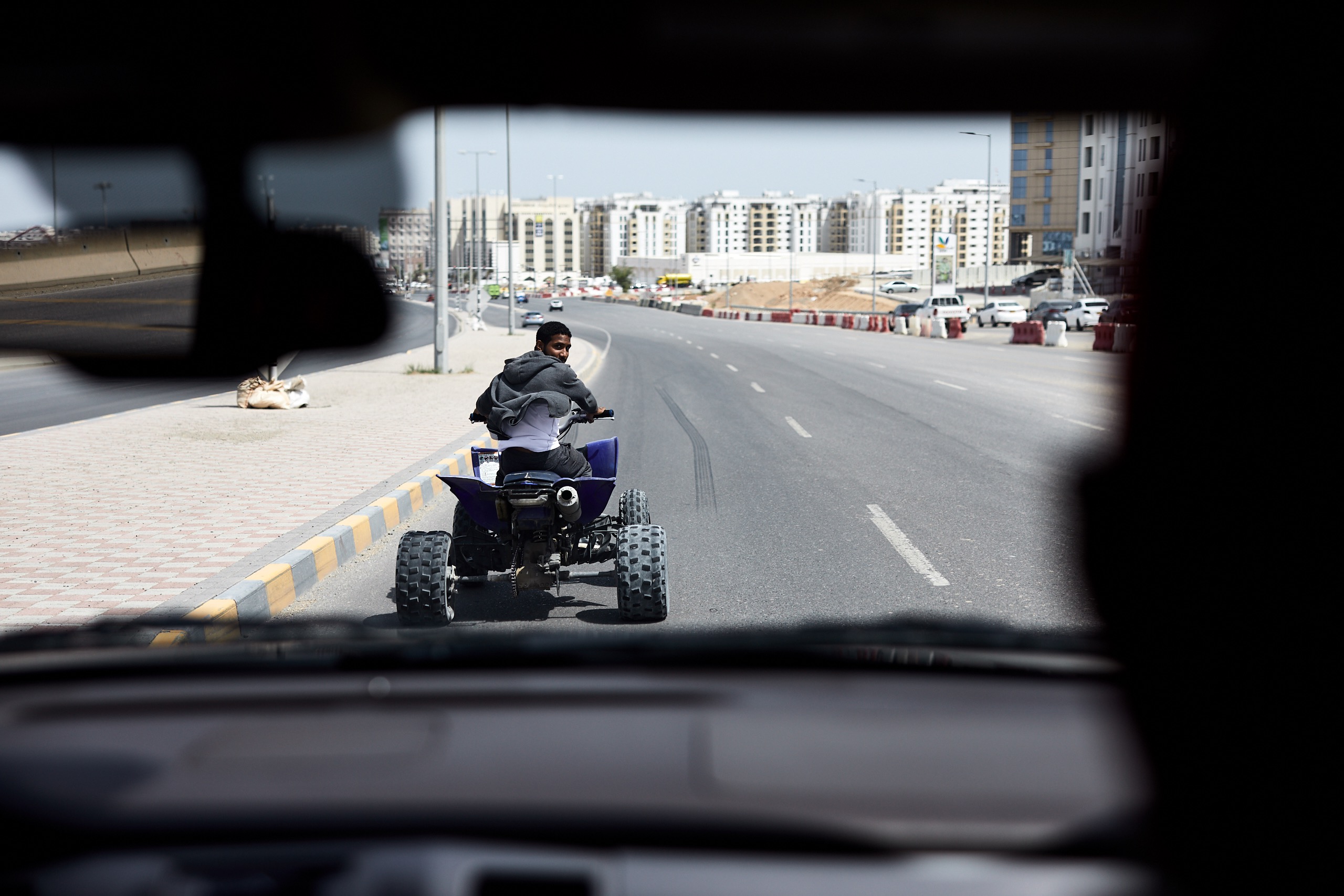 9. When they ride, most of the crew wear some kind of face covering as well as a helmet. This is precautionary, says Munther. “I had to sign something that [says] I will not ride in the street again. If they catch me again, I will go to jail for two days, and [if they catch me] again after that, for two months.” While the bikes are fast and agile enough to outrun the police, the crew is known among local authorities. If law enforcement don’t catch you in a street chase, chances are they’ll be waiting for you at home whenever you eventually make it back. 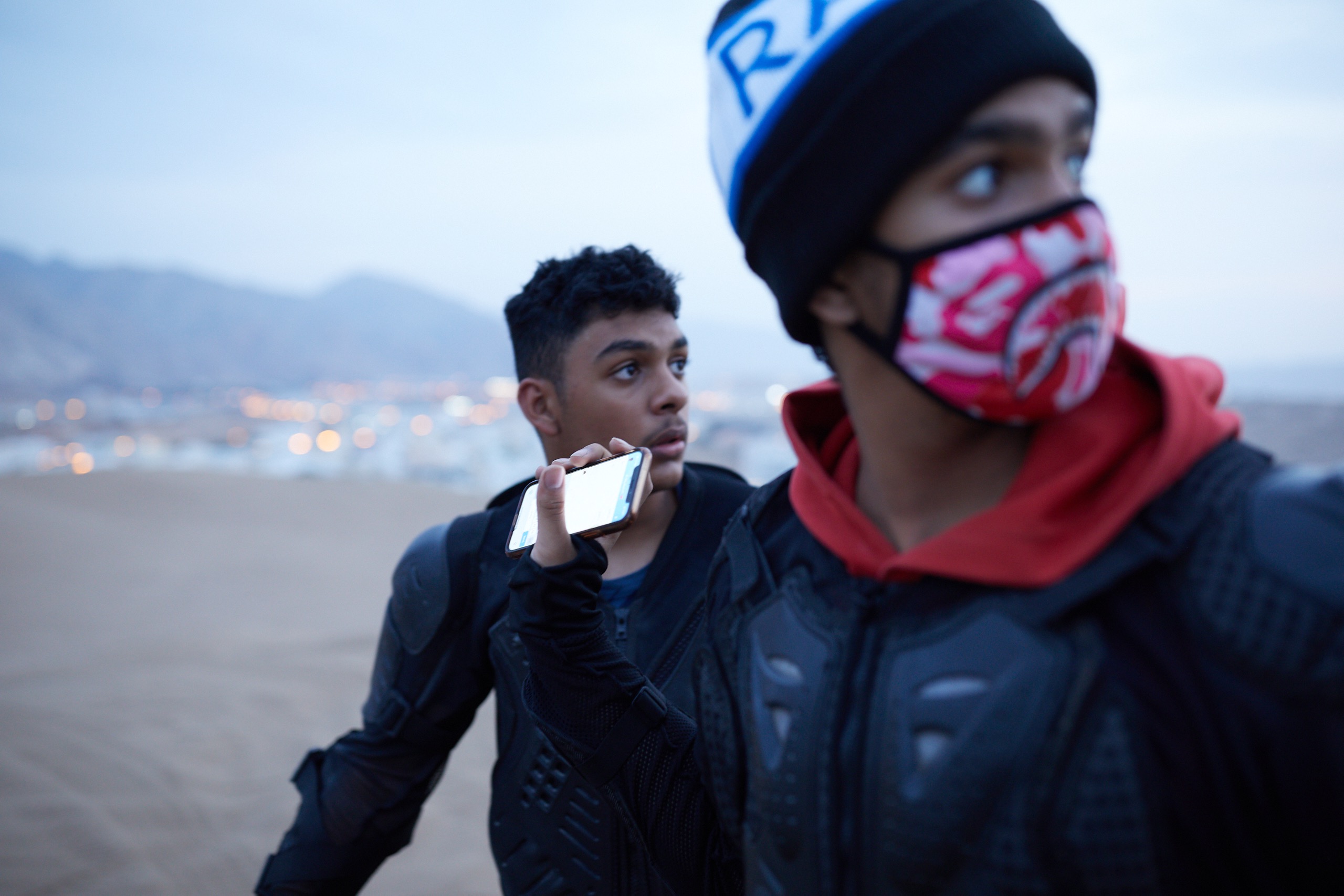 10. Ask the guys, and they’ll say that change in Oman is imminent. As rapid development continues to consume the areas surrounding the sands, they fear they soon won’t have anywhere left to do what they love. Finding the balance between expressing these fears and simply acting out is, of course, a recognisable part of being young. The Bousher crew are no different to other teenagers in this aspect. It just so happens that their version happens to stand out from the masses. 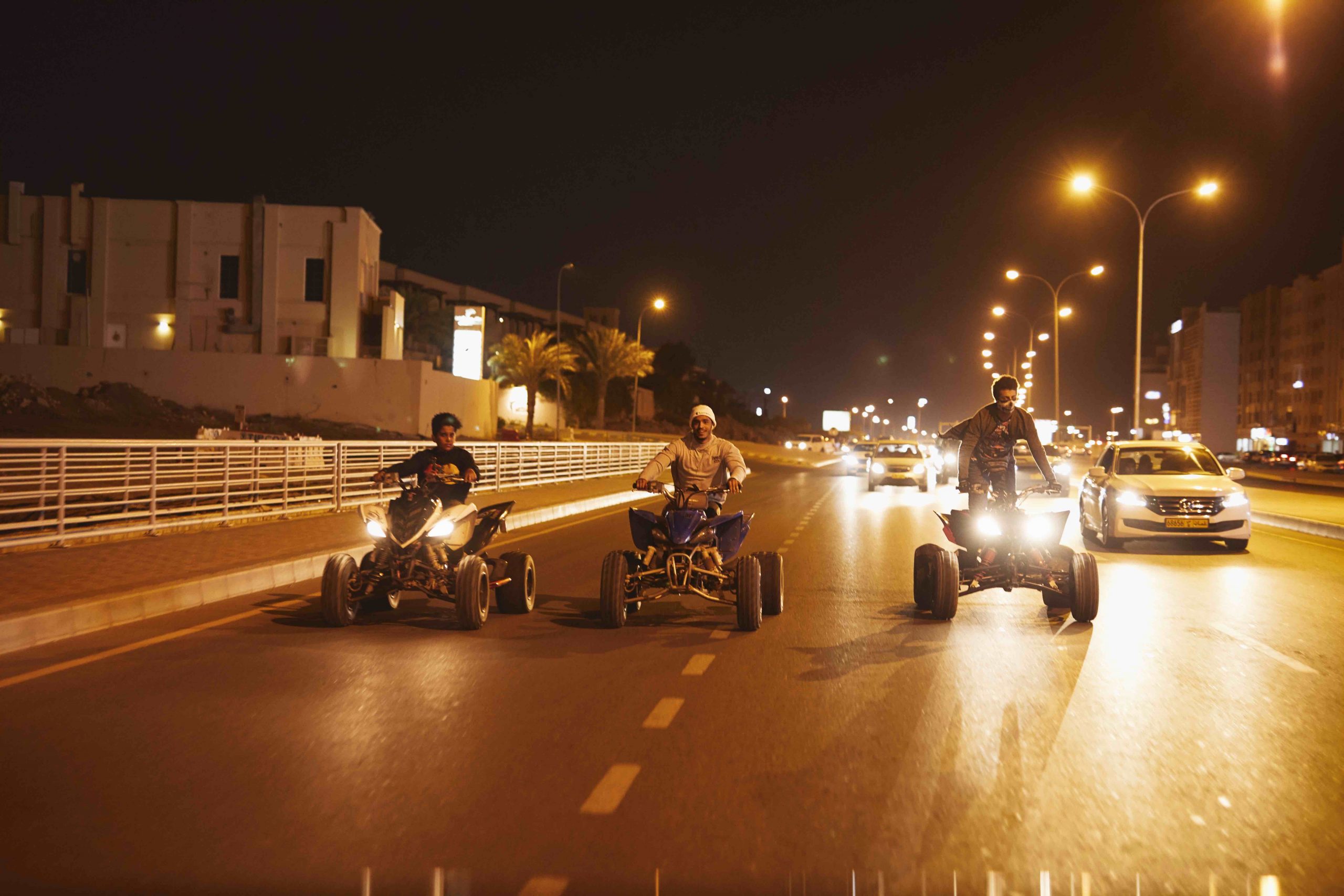 11. If Bawshar carries on moving in the same direction, it can be expected that the current trajectory for development will maintain and exceed its course. In this sense, the long-term future of the Bousher Bike Life crew remains unclear. But for as long as they’re able to, they’ll continue to engage in these frequent acts of four-wheeled rebellion. Because when it comes to momentarily escaping the pressures of adolescence in Oman, it’s the only way these young petrolheads know how. 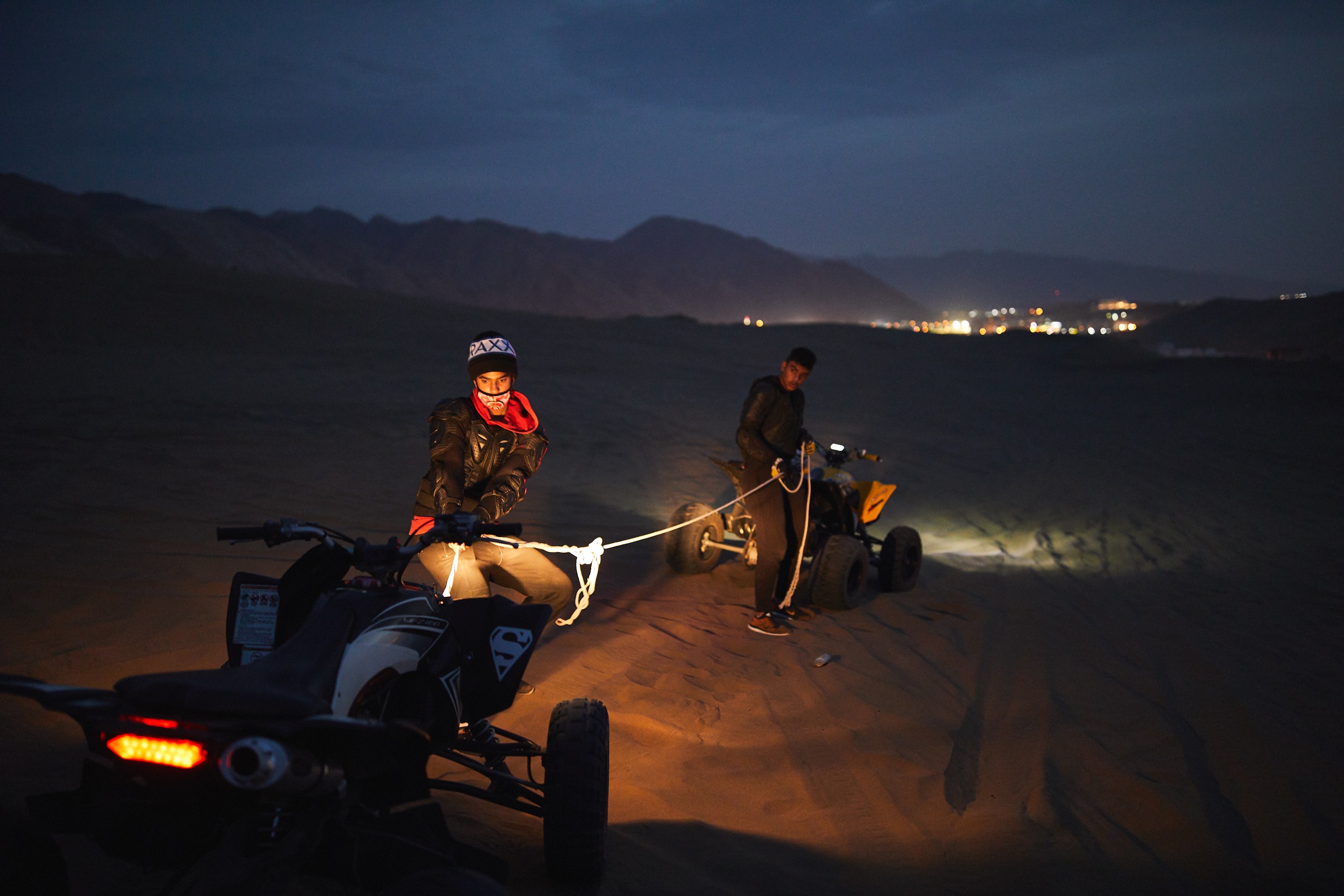 * Surnames have been intentionally omitted.

Everything Is Temporary is a short film about the Bousher Crew, directed by Bas Van Est in collaboration with OffThe Richter, and featuring the cinematography of Tim Padmos.

Linkedin
RELATED ARTICLES
OTHER ARTICLES
From snake handlers to mardi-gras revellers, Tom “TBow” Bowden’s photos provide a snapshot of the wonderful and weird people who make up America.
Campaigners reflect on what the supreme court’s decision to allow buffer zones in NI means for the future of reproductive rights in the UK.
David 'Dee' Delgado’s photo project is about honouring and uplifting the city of his youth, and a world rapidly disappearing under the relentless onslaught of gentrification.
The pro skateboarder withdrew from the 2020 Olympic Games so he could come out as trans. Now, he’s hoping to encourage others to live as their authentic selves – within the sport and beyond.
A group of aid workers face prison for helping to save people fleeing their homes at sea. If they are charged, it will have a chilling effect on humanitarian efforts.
After blocking the Scottish government’s gender recognition reform bill, Westminster is now devising further changes to the law to make it harder for trans people to self-identify.