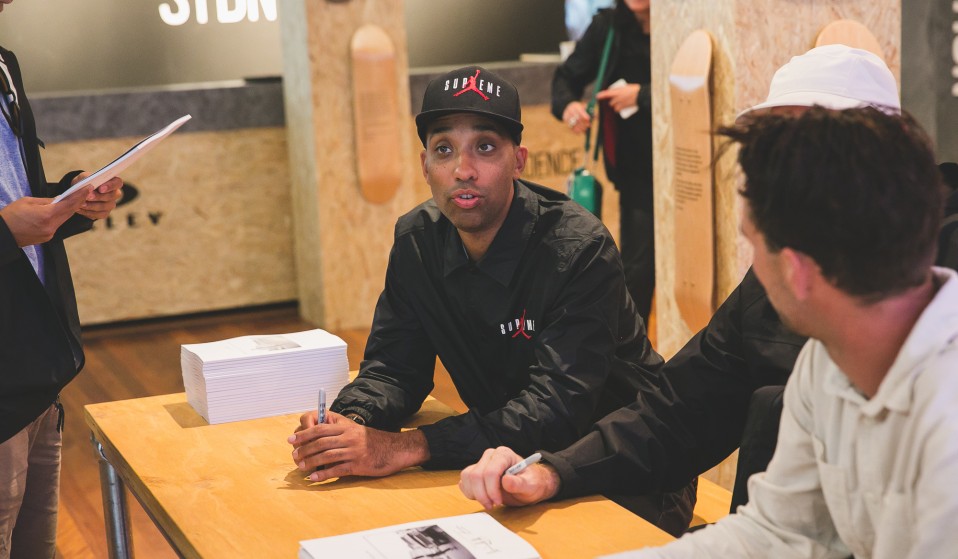 To celebrate his retrospective exhibition in Sydney, we catch up with Atiba Jefferson about the skateboarding photographs that have made him who he is.

To celebrate his retrospective exhibition in Sydney, we catch up with Atiba Jefferson about the skateboarding photographs that have made him who he is.

Atiba Jefferson is one of the friendliest guys I’ve ever met, and I say this – hyperbolic as it is – with some confidence. I met Atiba yesterday for the first time and, within the space of 20 minutes, he shook my hand, asked me questions about my life, furnished me with sound advice, smiled a good bunch and took what appeared to be genuine interest in the things I was saying. For someone like me, someone for whom drumming up small talk is a struggle akin to completing a Rubik’s Cube made out of circles, talking with someone who can take the conversational lead is always a load off.

Atiba and Sean are in Sydney for Oakley in Residence, a studio and skate spot celebrating the thriving culture of skateboarding. This stop is the third of the In Residence journey (previous hubs have included London and LA) and is being used to showcase 15 of Atiba’s photos alongside shots from Sydney photographers Mike O’Meally and Andrew James Peters. So it seems only fitting that I sit Atiba down for a chat about photos and the like.

When and where did you first fall in love with photography? Was it skateboarding first or photography first?
Skateboarding. Skateboarding will probably always be my one and only love. I started skating at 13, picked up a camera at 15. I was in high school and got in a fight and broke my hand, so started taking art classes because it was something I could do. I had a couple of friends who were photographers and they were big influences on me. Once I saw the film develop in the art class, I was sold. A big part of me knew I was never going to be good at skating, and it just became a passion.

Where’d you grow up?
I grew up in Colorado. A small town called Manitou Springs an hour south of Denver. I started shooting photos and got in a couple magazines. I visited California and I knew that’s where I wanted to live. I didn’t think I’d ever have a career – I was going to apply for a job at a 7/11. But I moved to California when I was 18 and Grant Brittain, photo editor of Transworld – and one of the greatest skate photographers – asked me to be his assistant.

So I did that, and at the end of ’99 I moved to LA and had an opportunity I assisted Andy Bernstein, the Los Angeles Lakers and Clippers team photographer. He taught me to really be a photographer – how to work with Hasselblads, strobes, shoot portraits, work with a client. All the things that make a professional, a professional. But I still love Colorado, and people get mad because I have all my Colorado teams and my LA teams. Never hate where you’re from, and never hate where you’re at.

What’s your earliest memory of shooting skateboarding?
I have my first skate photo. It’s tragic because I threw away a lot of negatives. I didn’t think they meant anything. But I look back at that one photo and it’s amazing – I still look at shit the same way. I always try to look at a photo and think ‘how can I shoot it different?’ There comes a point where you get into a rhythm and find your groove, and I look back at that same photo and it’s the same shit. I pre-visualise photos and it’s still the same. 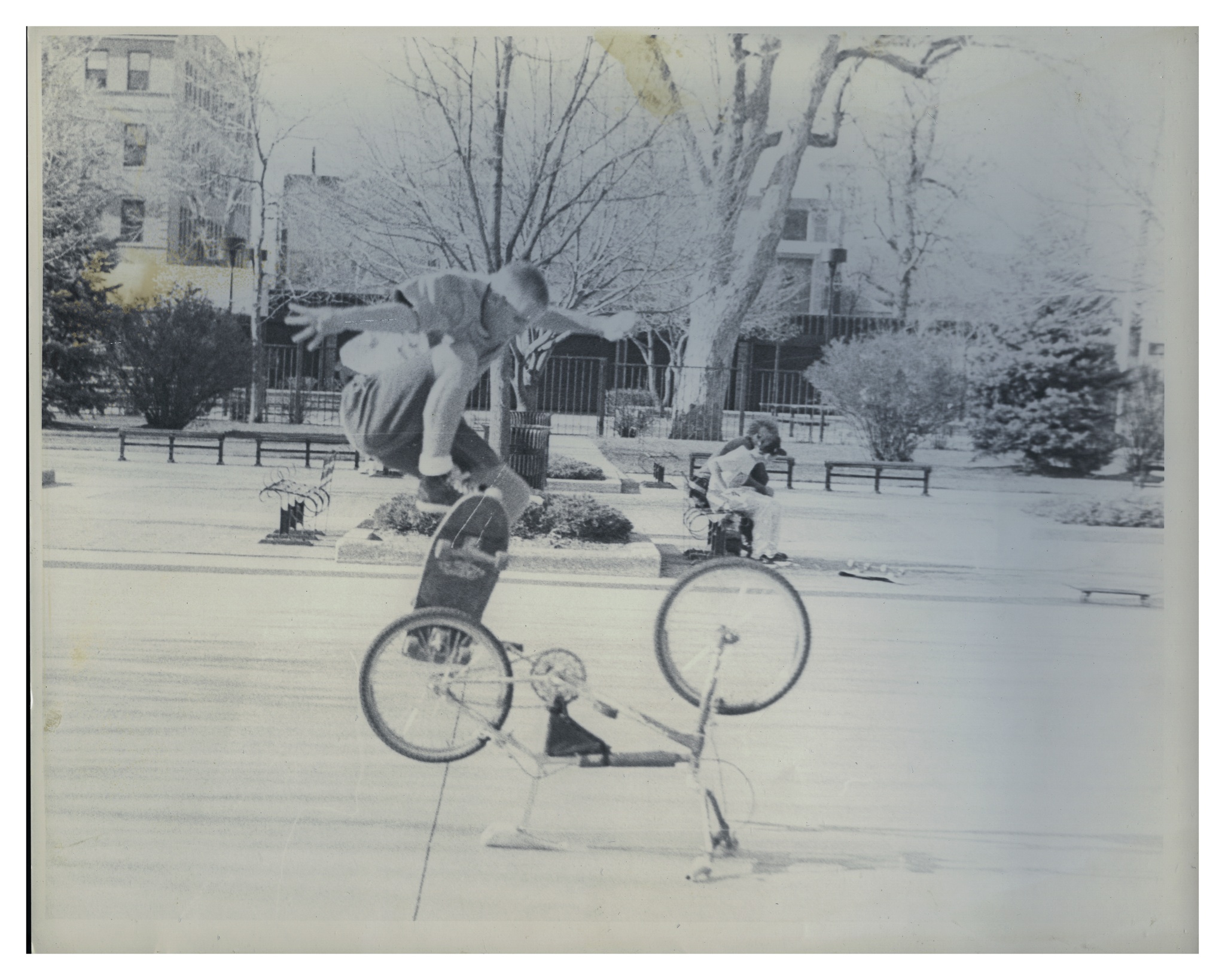 How important is it for you and your subject to have a good relationship?
That’s 75% of photography. You could be a great photographer and be an asshole, and nobody’s going to want to shoot with you. Especially in skateboarding. You’ve got to be a parent, a friend and a coach all at the same time. These guys are losing their minds – rightfully so – trying something they could get hurt on. So even when I’m doing commercial stuff, shooting portraits and so on, you’ve just got to make people feel comfortable, that’s what photography really is. If you don’t want to deal with people, be a nature photographer. But once you start learning how to deal with people, that’s the biggest key. You could be a cool person and take a shitty photo, and you’re probably going to get further with it.

What’s the furthest you’ve gone to help someone get the trick?
Probably a shitty answer for it, but there are photographers that work a lot harder and do a lot more than me. We’ve definitely cut handrails, helped them hop fences and so on. So yeah, have I broken the law to get a photo? Fuck yeah. I’ve done it all. So many times I can’t even think, because that’s what it takes. A three-second clip of one photo can take months, little do people know. It’s really taken for granted.

What’s the gnarliest photo you’ve ever shot?
There’s a lipslide Heath [Kirchart] tried at UCI that was the sketchiest thing. Anytime anyone skates El Toro or the Hollywood 16, that’s sketchy. Andrew [Reynolds] kickfliped Davis in Stay Gold – that was one of the gnarliest things I’ve seen. I’ve seen Tony Hawk do a loop, do a 900… those things are crazy. Even Curren [Caples] flying around bowls – no pads, no helmet – fucking sketchy. He’s warming up with face-high frontside ollies – I think that stuff is way more dangerous than skating rails.

Do you have a photo you consider your ‘favourite’ yet?
I think I’m still searching. I’m still looking to improve. When I shoot anything, I’m still thinking, ‘That could be better, this could be better’. There’s a photo of Reynolds frontside flipping a double set with a ton of people around – that’s probably the closest I’ve got. That’s the one people ask for the most. And he’s a very dear friend. 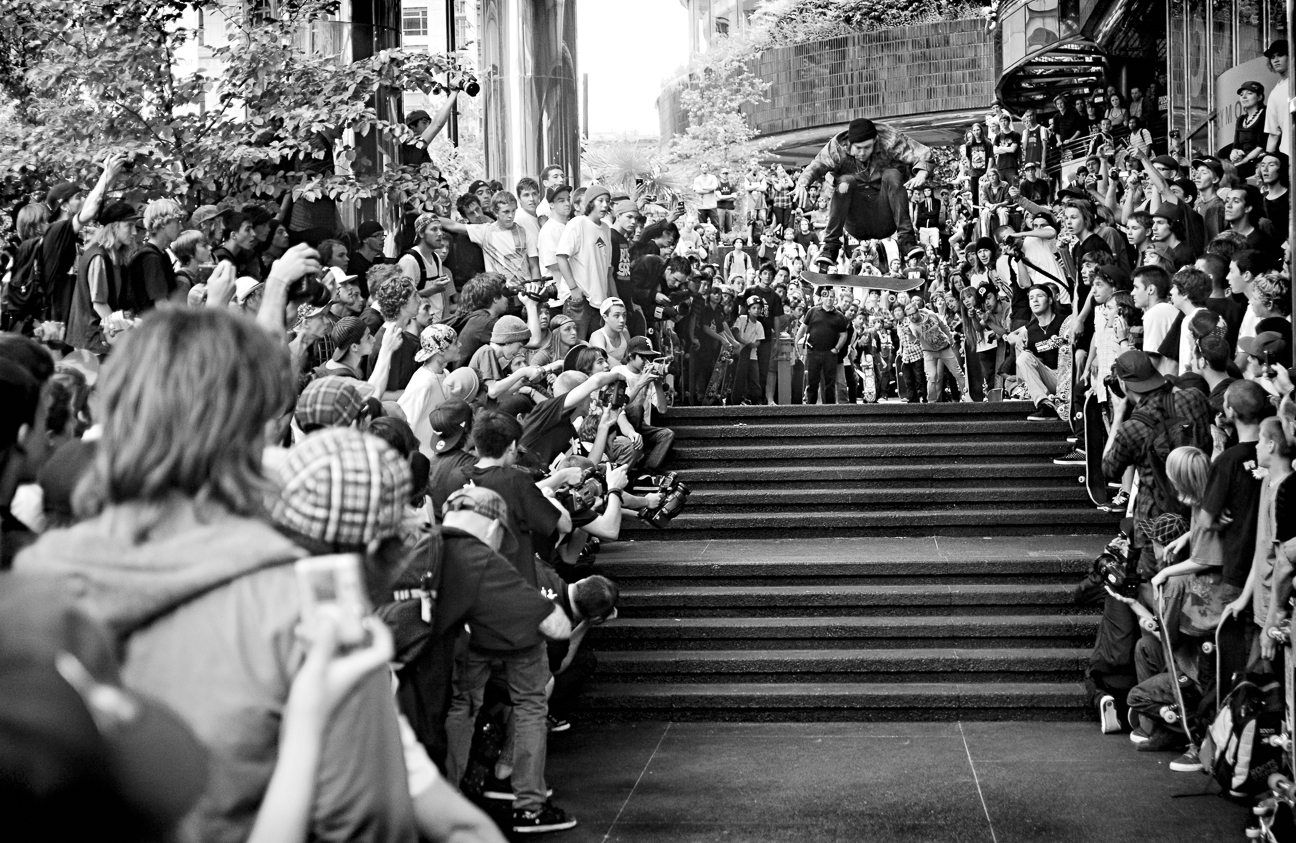 What do you think are the biggest hurdles of being – or becoming – a professional skateboarding photographer?
The biggest hurdle is skating being illegal. If skateboarders could sit at a spot for as long as they want, skateboarding would probably be even more progressed. But at the same time, maybe not, because people know they’re on a time limit so they have to get the trick. I don’t think there’s much besides that. It’s hard to do something that people don’t always support. For the skaters, they could make a million dollars a year and still get arrested at any time for it. That’s ridiculous to me.

Do you have one piece of advice to end this on?
I always say just do it. No matter what you’re into: skateboarding, music, being a doctor. Just do it. Obviously it’s not that easy with paying bills, and you have to work, but do it. If you love photography, work at a camera shop. If you’re into music, work at a record store. It’s that easy. Surround yourself with what you love and you’re going to be happy every single day of your life.

Oakley In Residence Sydney is located at 74 Commonwealth Street, Surry Hills and is open until November 29.

Linkedin
RELATED ARTICLES
OTHER ARTICLES
Up-and-coming UK artist and photographer Harry Cartwright on inspiration, his love affair with LA, and the next steps.
To celebrate Nike SB's NESW project – a series of videos and a book about the UK skate scene – we catch up with photographer Henry Kingsford.
A pretty portrait on the wall is all good and well, but shouldn't we be celebrating art that makes an impact in the real world?