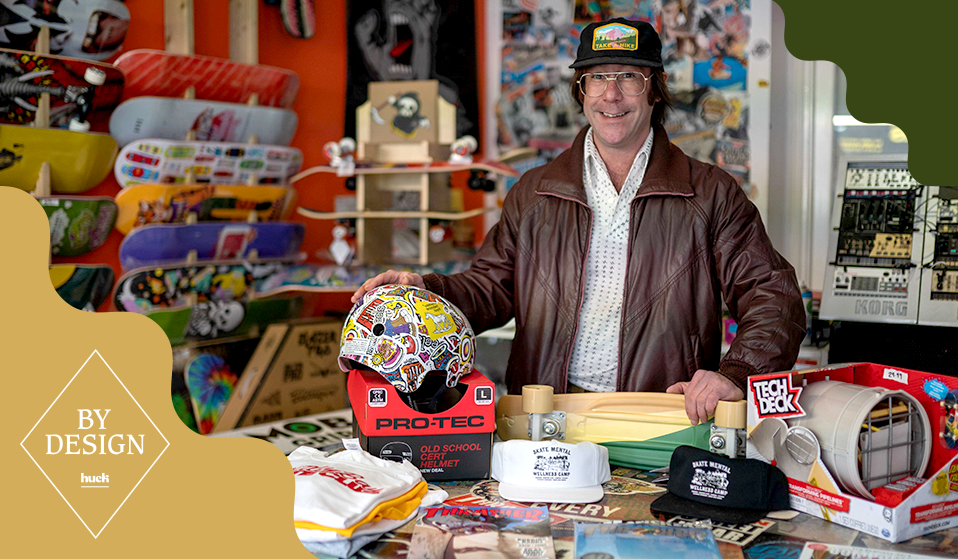 In the first instalment of By Design, a brand new editorial series, we explore how a retro skate shop in the North-East became the launchpad for a thriving creative community.

By Design is a new editorial series, created in collaboration with 99designs by Vistaprint, that celebrates small businesses across the UK and spotlights the power of a strong visual identity. In the first instalment, we explore how a retro skate shop in the North-East became the launchpad for a thriving creative community.

As a kid growing up in the mid-’80s, all Paul Morales wanted to do was skate and surf.

Every morning, he’d leave his home in Cullercoats, a small fishing village around eight miles from Newcastle, and ride down to the beach, where he’d survey the mood of the sea. If it was favourable, he’d promptly swap one board for another and spend the rest of the morning riding waves until he had to depart for school.

Back then, the local surf community was small but solid. In Tynemouth, the closest town, Paul would spend weekends at a little surf shop. He’d lose hours there, checking out all of the stuff he read about in magazines. However, when it came to skateboarding, there was less of a tangible scene. 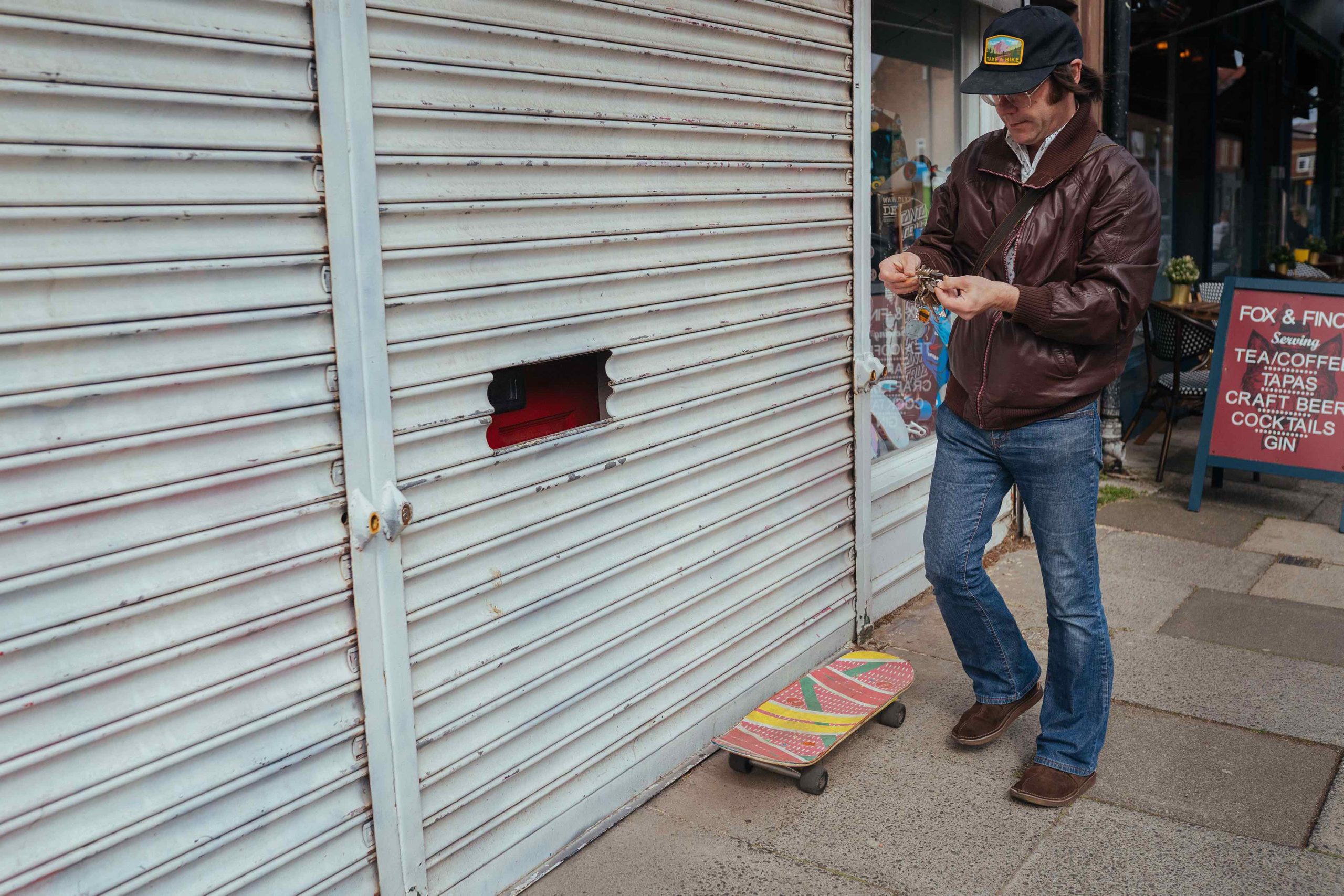 “You’d have to travel to properly skate,” he remembers, talking down a crackly phone line in a warm Geordie lilt. “Me and my mates would travel into Newcastle on a Sunday and skate round the town because it was empty. You had to get the metro and then a bus, which would take like half an hour. But there were no skateparks or anything, just this big underground car park we used to bomb down. I remember, I wrote to the council like, ‘Will you build a skatepark?’ They never did.”

“We all had really rubbish boards too – I used to get them from the local market,” continues the 42-year-old. “If you wanted something brilliant, you had to get it on mail order. There was nowhere that sold the good stuff.”

For Paul, who first picked up a skateboard aged 10 after deciding he wanted to be like Marty McFly, the lack of access was puzzling. He grew up on Bones Brigade videos and stories of the Z Boys in LA. Why shouldn’t he be able to do what they did? 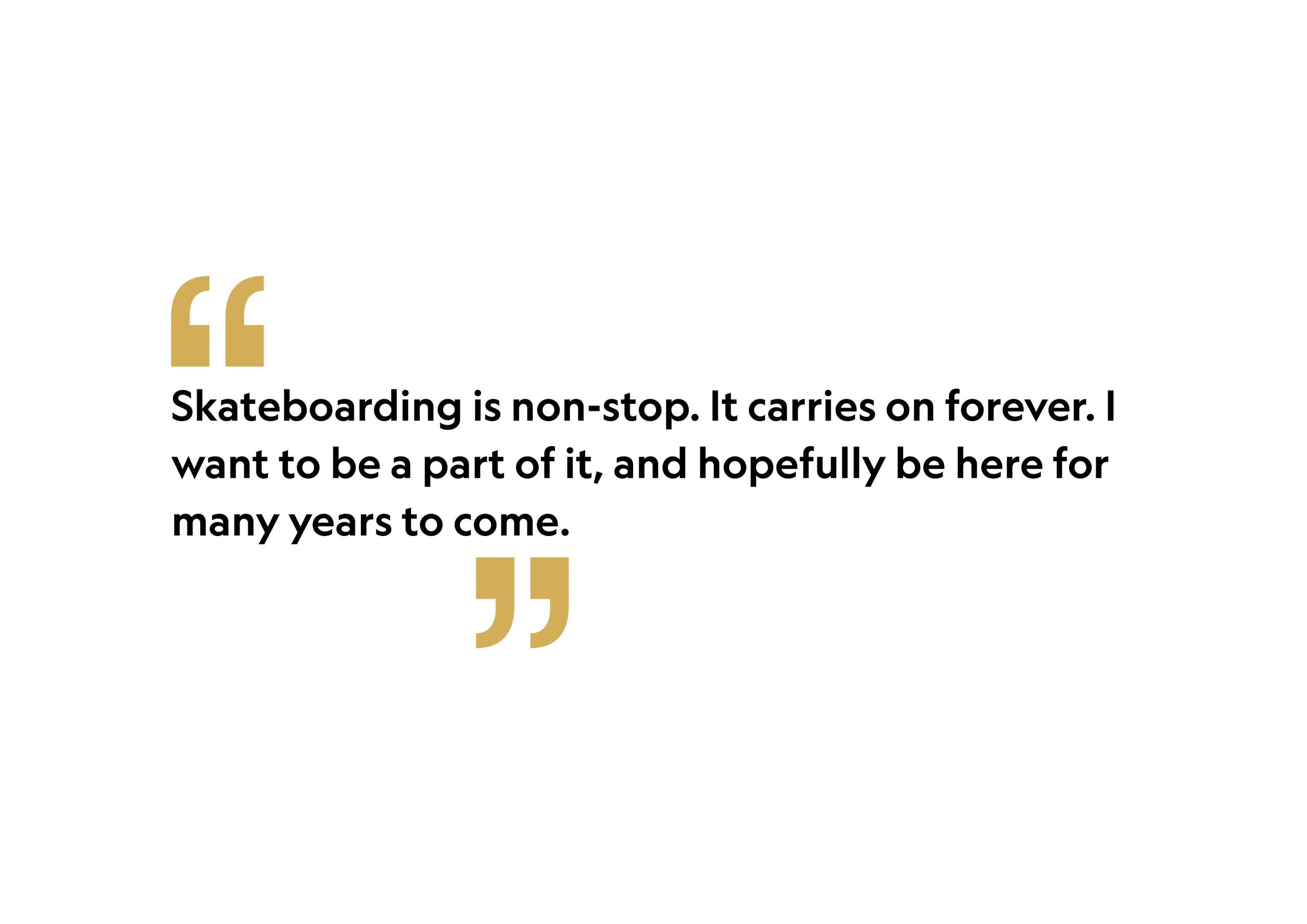 As he grew older, that gripe never left him. He spent time in France, before returning home to the North-East and working a series of odd jobs alongside playing in bands. After a while, he settled on a permanent role as an artist liaison at the famous Sage music venue in Gateshead, a job that he loved. But skateboarding remained a huge part of his life.

Then, one day in 2013, everything fell into place. Paul went to sleep and dreamt that he owned a skateboarding shop in Whitley Bay, a neighbouring seaside town. When he woke up, he immediately grabbed a pen and sketched it out, exactly as he remembered it: an old-school trove with a distinctively retro feel, just like he’d seen in the films. “I just thought, ‘Aye,’” he remembers. “‘Why don’t I just actually do that?’”

Things moved pretty quickly after that. Paul enrolled on a business course and set about learning the basics. While this was happening, he began contacting suppliers and signed a lease for a small space on the Whitley Bay high street. Even a serious health issue, which saw him spend a prolonged period in intensive care, wasn’t enough to deter him. “When I got let out of hospital, I opened the shop up the next day. I’ve been here ever since.” 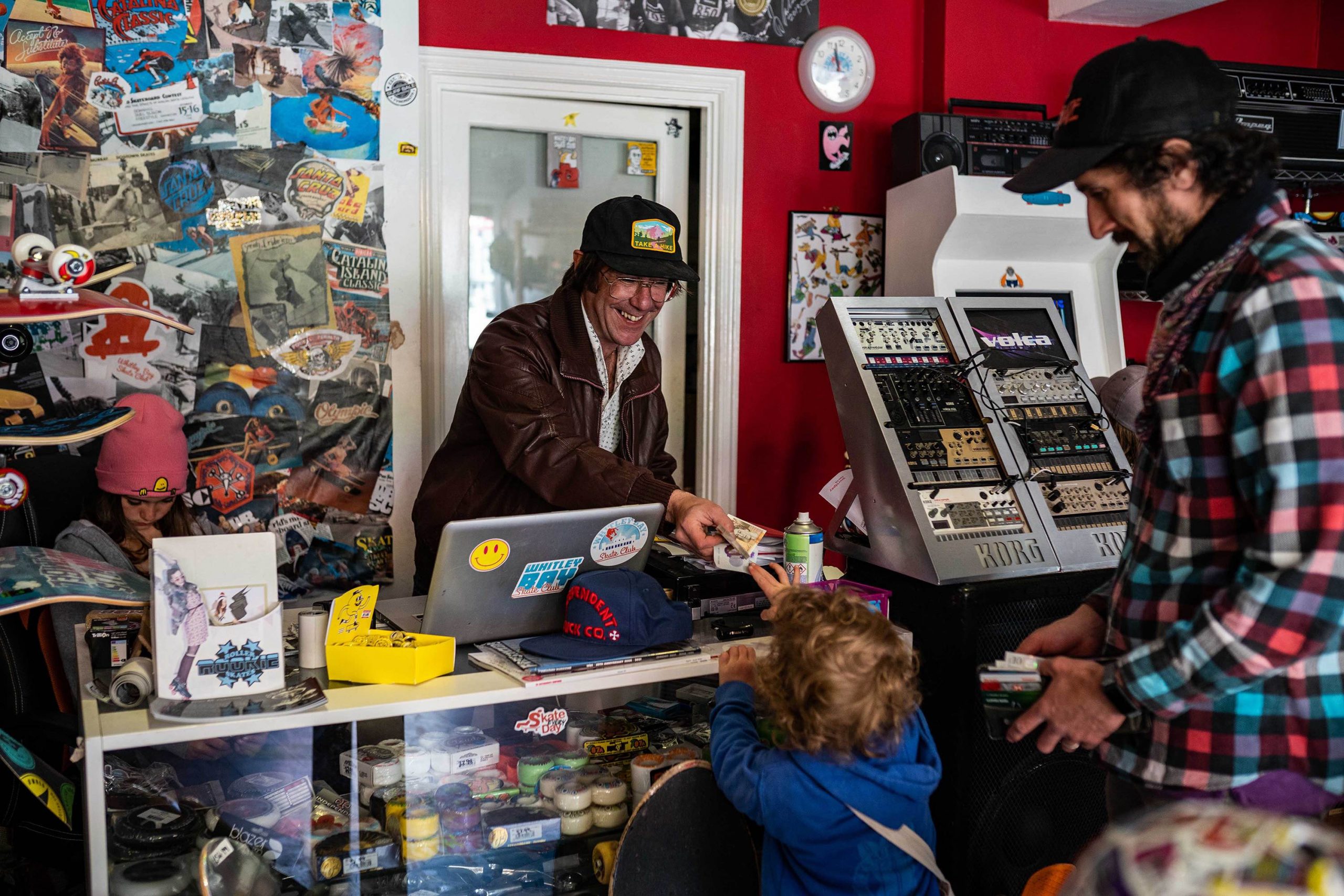 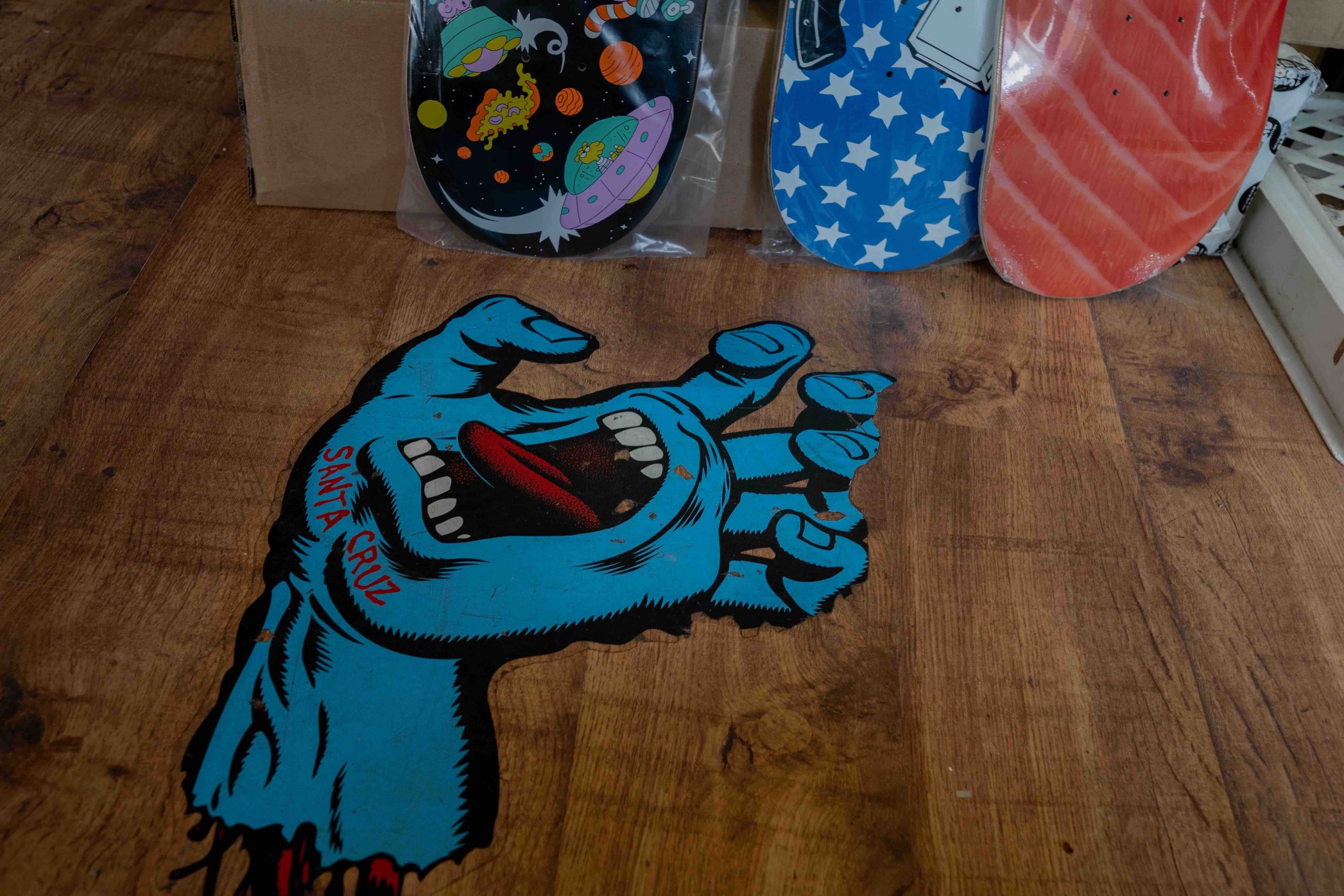 From day one, the idea of community was at the heart of everything. Paul modelled his shop on the American equivalents he’d grown up watching on TV: cluttered hang-out spots with an open-door policy, where anyone can swing by and kick back. It was the kind of thing that he’d never been able to experience as a kid, so he wanted to make sure that the current crop of young skaters had somewhere they could call their own. It’s no coincidence that its name, Whitley Bay Skate Club, connotes ideas of collectivity and belonging.

“If you’ve seen Dogtown and Z-Boys, the documentary about Tony Alva, Jay Adams and all that, you’ll know they had the Zephyr Skate Shop there in Santa Monica,” says Paul. “I watched that film and just wanted to create something similar, where people can hang out, watch skate DVDs, play on the arcade machine. I used to have Tony Hawk’s Pro Skater on the Playstation, too. Kids used to come in and try to beat my high score. They never did!”

Just as important was the look and feel of Whitley Bay Skate Club. Paul always wanted the space to feel like a cultural time capsule: somewhere that visually reflected the golden age of skateboarding. “Somebody walked past the shop the other day and they were like, ‘Woah, look at this, that’s a proper old-school skate shop!’ I liked that. That’s what I want people to think. I’ve got E.T. up on the wall, Gizmo, He Man, loads of original ’70s and ’80s skateboards hanging up there. I’ve got the arcade machine in here, too. It’s nostalgic, it’s retro…  exactly how I imagined when I dreamt it.” 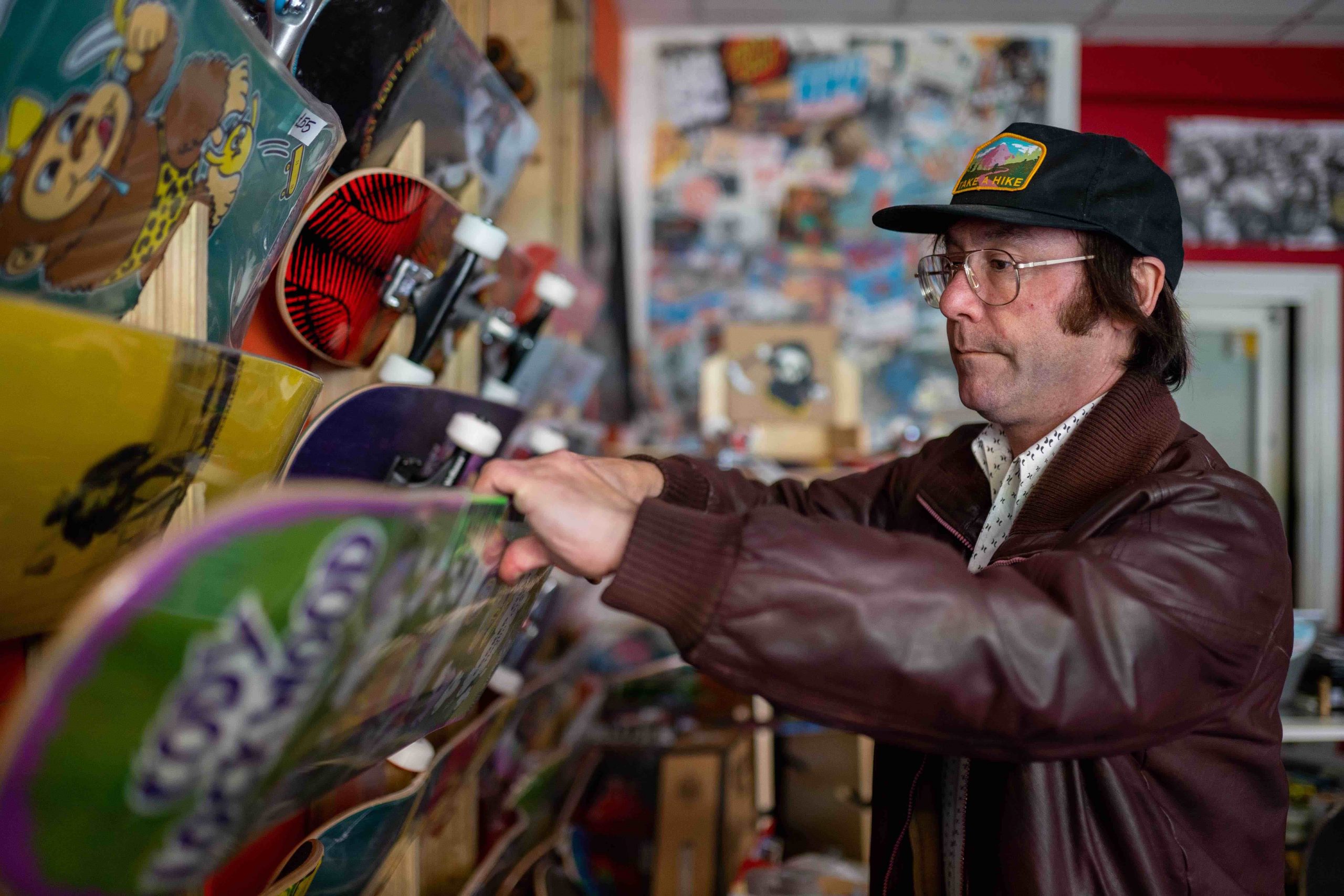 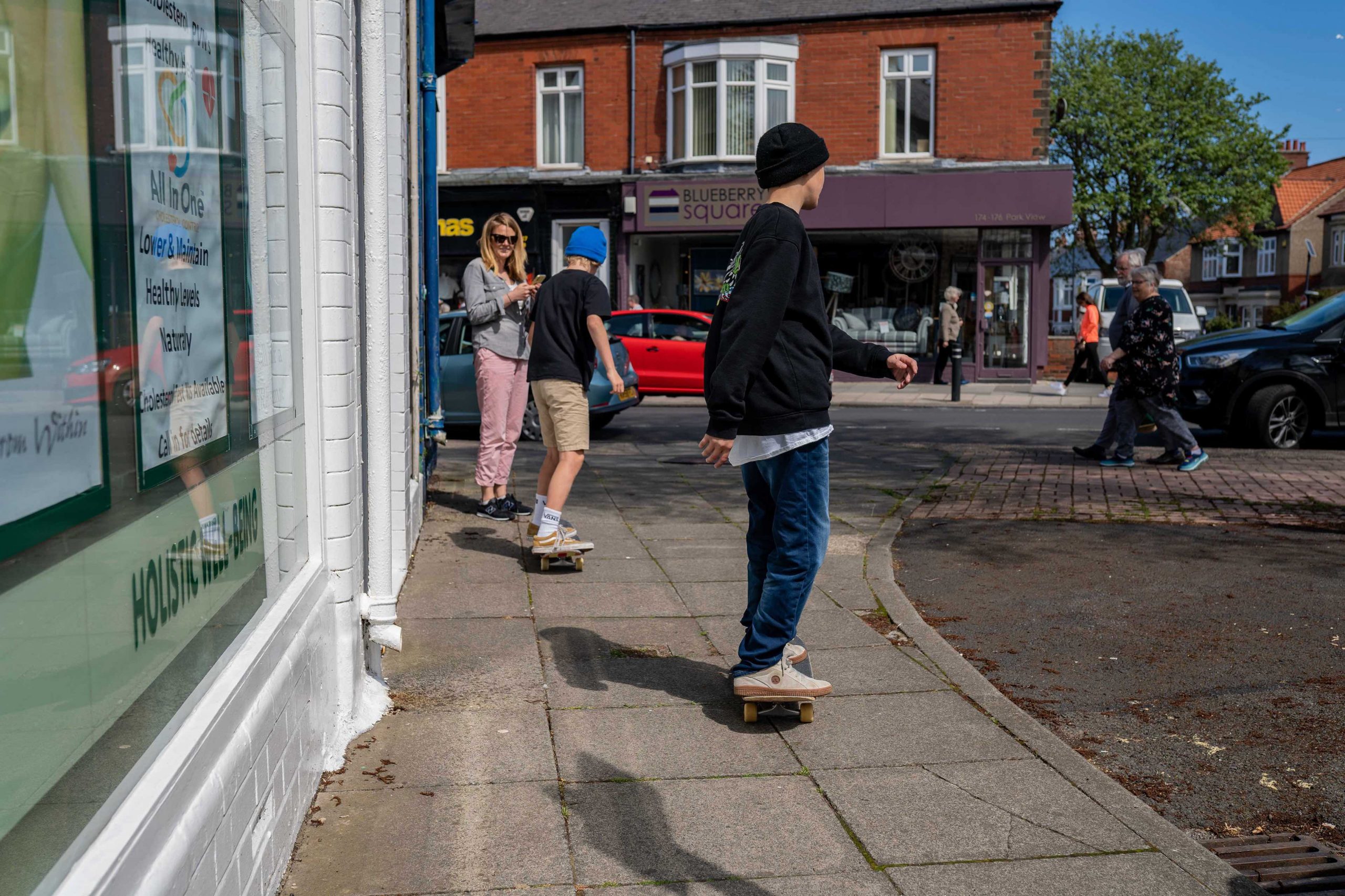 After launching, business was steady. But as time passed and word spread the shop grew in popularity. When a larger premises further down the high street became available – the space that Paul had originally had his heart set on – he wasted no time jumping in. Things continued progressing and soon Whitley Bay Skate Club found itself at the heart of a thriving community. “I learned what people were after, learned what sold,” says Paul. “There was a famous skateboarder called Mike Vallely and he started a brand. I was the third shop in the world to stock his stuff.”

As the shop has evolved, so too has the Whitley Bay area. The town regularly finds itself on appropriate best-of rankings: in 2018, The Guardian declared it the “winning tip” in an article titled “10 cool shopping districts around the world”. In tandem, the skate scene is almost unrecognisable when compared to Paul’s heyday: there’s a skatepark, a whole new generation of riders and, of course, his shop.

Paul plays an active role in fostering that community. He works with schools in the area to put on skate lessons and, before the pandemic, regularly hosted events at the store: from live music to workshops with local artists. For him, it’s about connecting the dots between different scenes in the Whitley Bay area, all under the umbrella of skate. “Skateboarding is non-stop,” he says. “It carries on forever. I want to be a part of it, and hopefully be here for many years to come.” 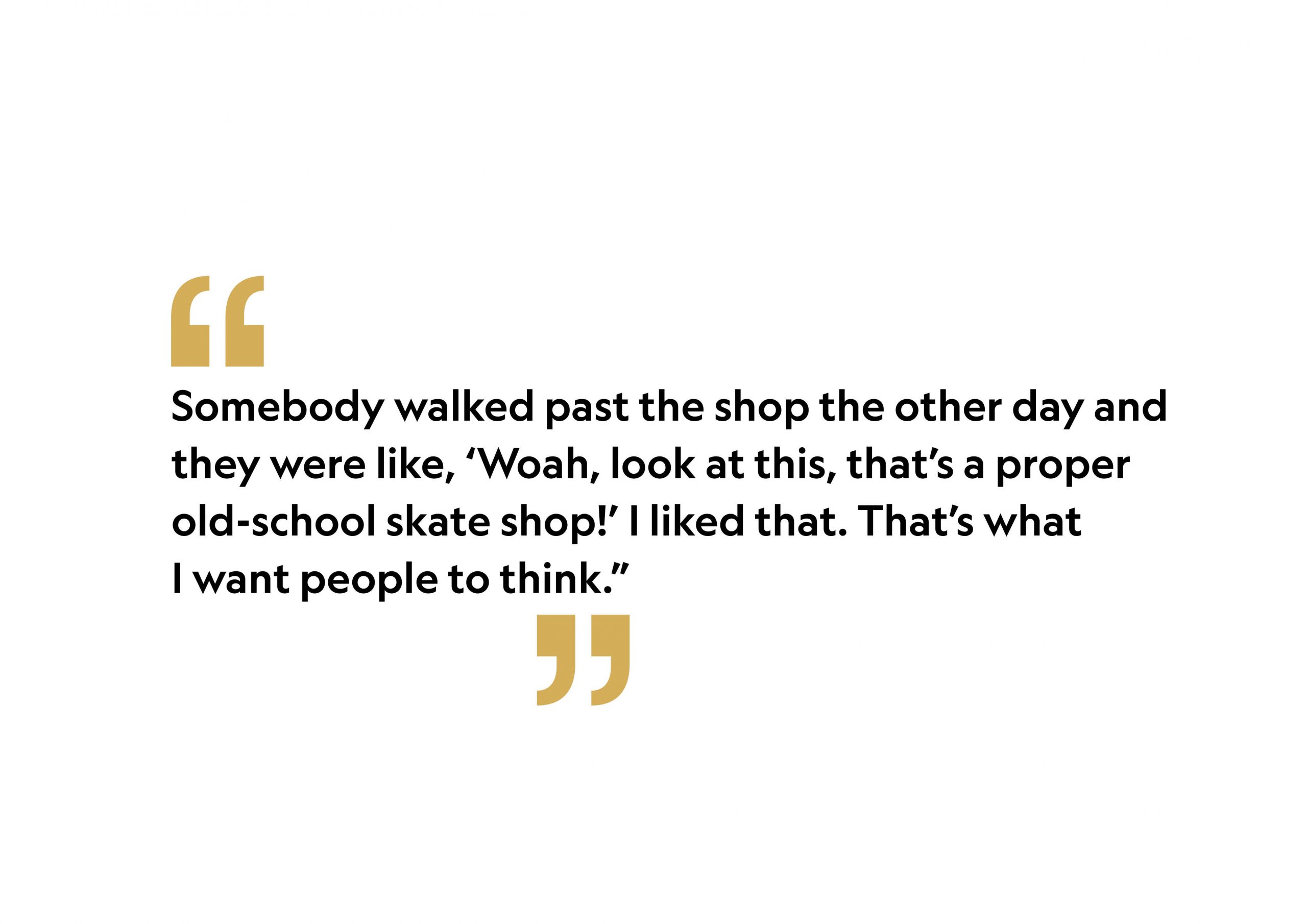 In terms of how exactly that future plays out, Paul wants to continue with the community work that has become so important to him. He’s also collaborating with a friend on another venture: a clothing store next-door to his current shop. “We’re going to be doing a lot of workshops in there. We want to get kids in so they can learn how to run a business. Something they can get involved with, feel part of.”

As the world continues to reopen following a year of lockdowns, it marks something of a new chapter for Whitley Bay Skate Club. Paul plans to update the store’s visual identity, which has always been a key pillar of the business, to mark that – with the help of 99designs by Vistaprint.

“Design is so important,” he says. “The Whitley Bay Skate Club t-shirts I have are big sellers. People send us pictures where they’re wearing them in Australia. People love our design, I want to carry that on with something slightly different – carry on the vintage vibes – then sell it with hoodies and caps and stuff like that. Sometimes, with kids who are mint skateboarders, I’ll give them a Whitley Bay Skate Club Team Rider t-shirt. They love that.”

Design by The Brewox on 99designs by Vistaprint.

The crowning moment of the redesign is a new logo, which incorporates Whitley Bay’s famous Spanish City building – a dining and leisure centre overlooking the sea – as well as the retro aesthetic that’s so important to Paul. “I love everything about skateboarding, surfing, and beach design,” says Adityo De La Roso, the designer who helped piece it together. “My inspiration was design from 70’s logos and beach vibes – because Whitley Bay is surrounded by beach.”

For Paul, it’s the perfect launchpad for what comes next. “It was great that they used a local landmark on it – it really stood out,” he says. “I was immediately drawn to it, I liked the font. It’s really cool.”

As for the financial grant that accompanies the redesign as part of the 99designs project, Paul already has plans for what exactly it will contribute to. “It’ll go into getting some higher branded stock, a new sign outside which can incorporate the logo, a new website… it will be a great help for the business.” 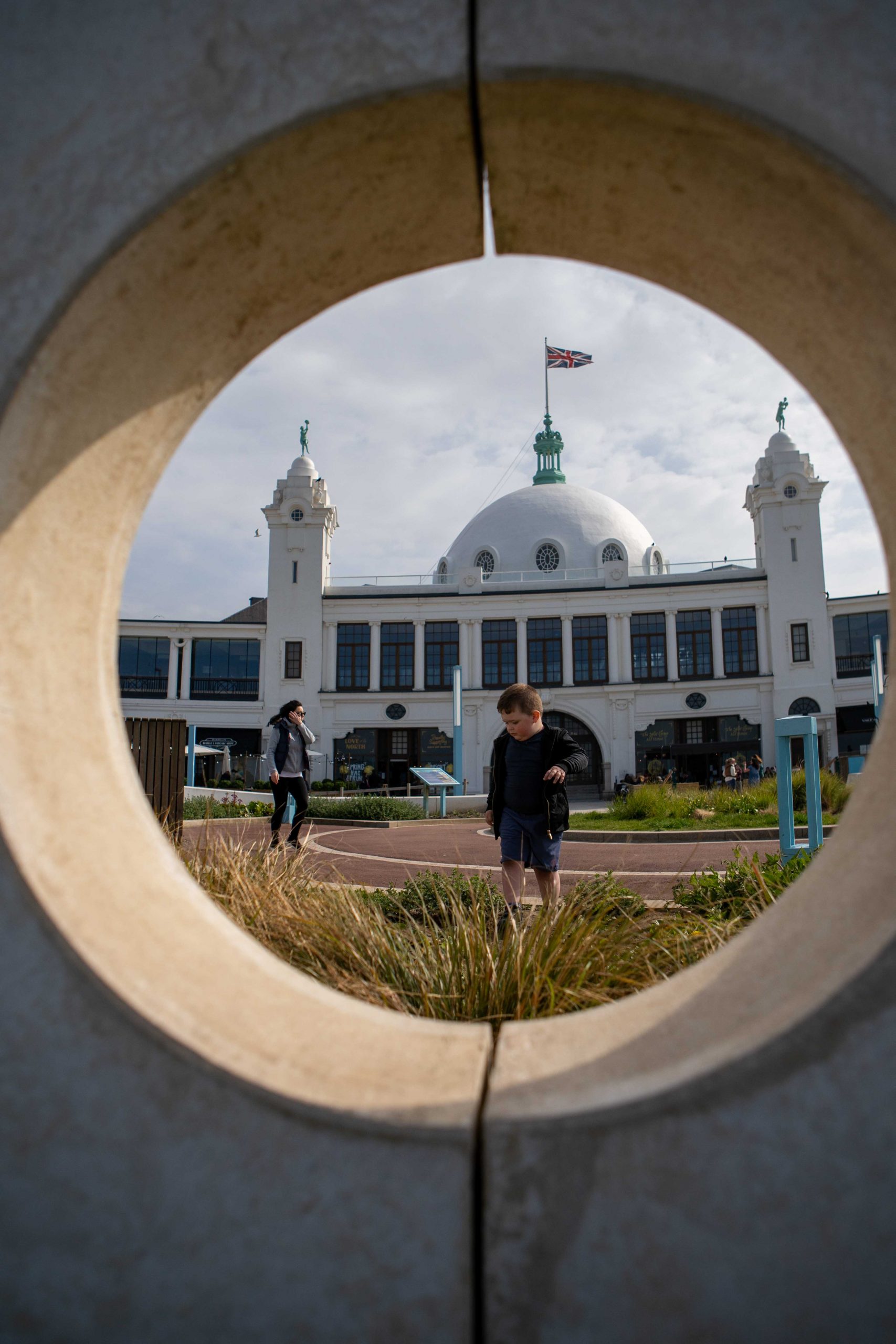 All of this comes at a time when skate culture has never been more popular. Over the course of the past year, many have sought release in the outdoors, with roller skating in particular experiencing a boom as new riders got involved. For Paul – who stocks anything on wheels – it’s about making sure all of those newcomers feel welcome from the get-go. He’s proud of what he’s created in Whitley Bay. He wants to share it with the next generation.

“It’s a different world now, isn’t it?’’ he says, recalling his time as a young skateboarder. Kids these days, if they want to learn how to skateboard, they can learn off YouTube. I used to have to pause videos and rewind them to figure out how to do a trick. They’ve got everything they need, but importantly they’re still enjoying the spirit of going out and having fun. That, for me, is the best thing.” 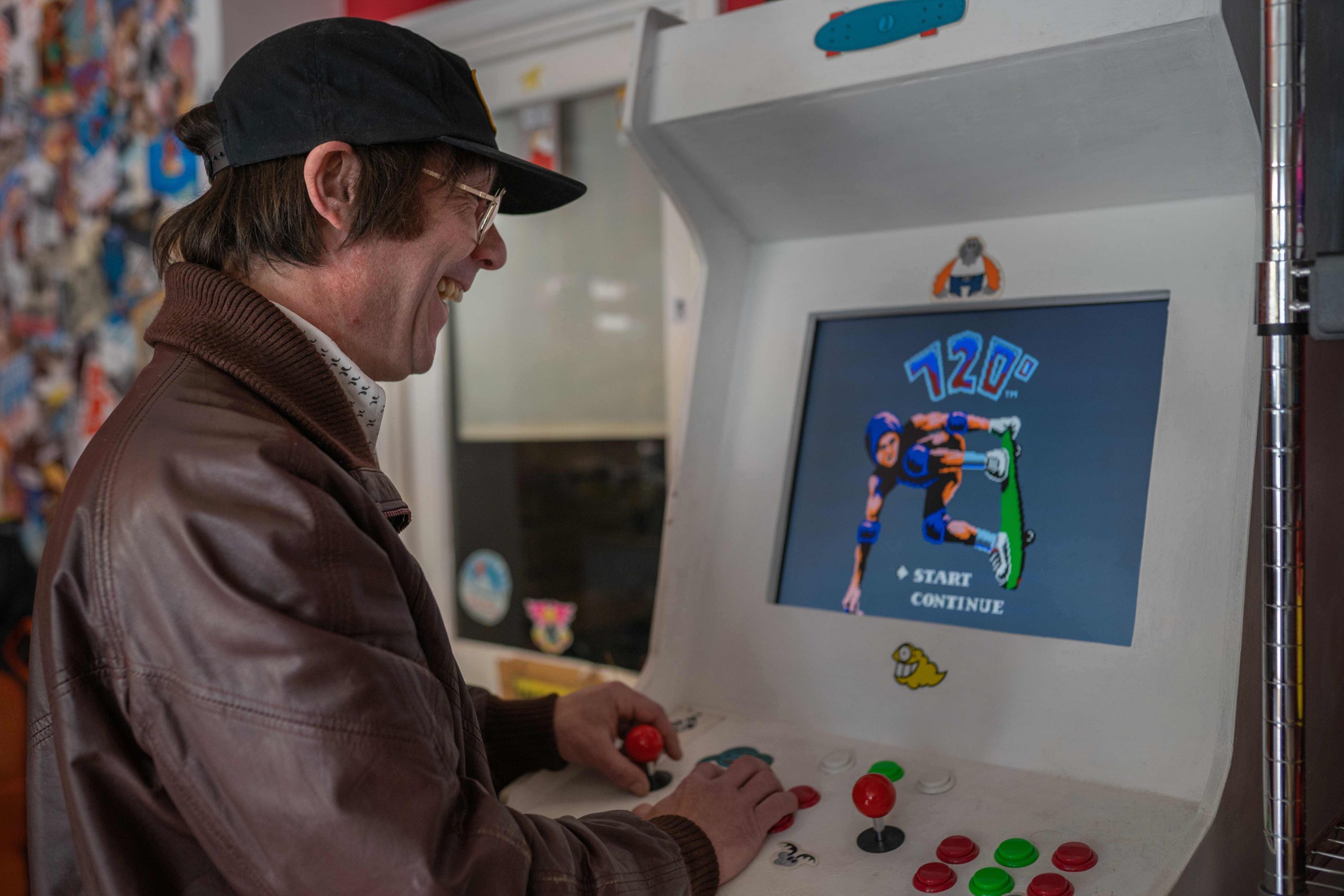 The new Whitley Bay Skate Club logo was created by Adityo De La Roso – aka The Brewox – on 99designs by Vistaprint.

Linkedin
RELATED ARTICLES
OTHER ARTICLES
After fleeing the war in Ukraine, people are finding it impossible to secure affordable and decent housing in the UK.
David 'Dee' Delgado’s photo project is about honouring and uplifting the city of his youth, and a world rapidly disappearing under the relentless onslaught of gentrification.
Taking us through one of the most dynamic years in recent history, Laylah Amatullah Barrayn new photo book contains tender yet confrontational portraits.
A new law change is enabling Britain’s donor-conceived children to know the truth about their origins – but campaigners say the fertility industry must do more to protect people.
Zsófia Sivák’s ongoing project documents the country’s tavern culture, preserving a once defining part of rural life.
The first-generation graffiti artist reflects on the tagging’s emergence as an art form and the players who pushed the medium forward.