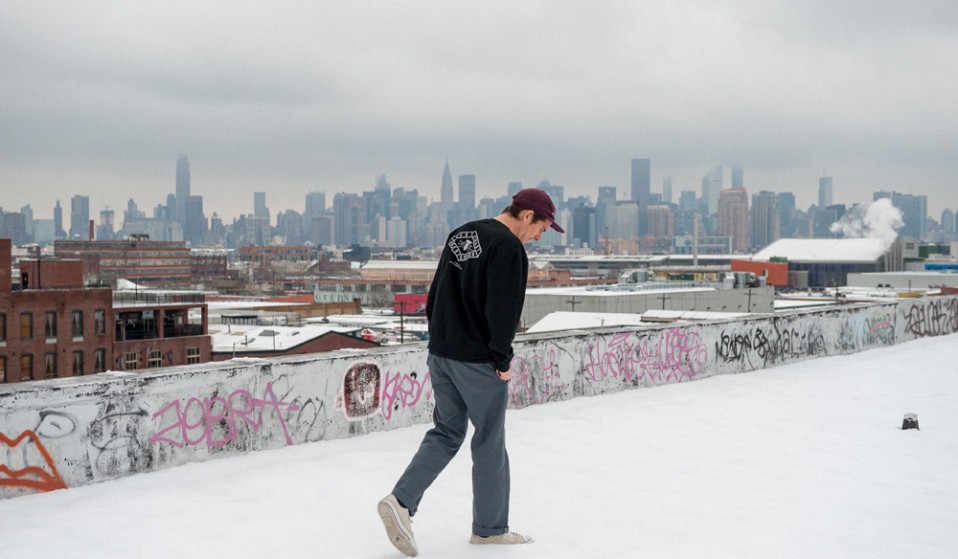 Despite New York City being skateboarding’s sexy story of 2014, NYC and the entire East Coast still lacks a sustainable skate industry. The five boroughs are home to more professional skaters and brands than ever before, but skateboarding’s revenue has always flowed predominantly through California. And yet, as skating becomes more content driven – with brands fighting to put out the next hot edit – New York’s become an invaluable marketing tool.

“It’s like the way the US mines third world resources, they’ve mined our talent but never created a sustainable model here,” says Josh Stewart, owner and operator of Brooklyn-based skate distribution company Theories of Atlantis. “Brands take sponsored skaters and relocate them to California, then send their riders back out here to film and shoot photos, to use the aesthetic and backdrop of New York. It doesn’t make any sense.”

In 2010, Stewart leveraged the distribution contacts he formed through promoting his independent skate videos including the popular Static series and started Theories. He started by carrying the Parisian brand Magenta, and quickly added Pontus Alv’s company Polar. Since relocating from Florida to New York in 2006, Stewart has become a visible fixture in the scene, releasing a steady stream of Static videos, producing art shows, and keeping the Theories site rife with content.

Stewart says the idea with Theories of Atlantis was to create a collective of small brands, united by an independent spirit. It soon became a home for small East Coast and European brands that barely had a shot in the United States, with Stewart producing some goods stateside to make them affordable. The next step was to showcase Theories of Atlantis at the bi-annual Agenda skate/surf/streetwear trade show in New York, but like any big project undertaken in NYC, there were politics.

“We wanted to do it, but booth spaces are really expensive. Then Joel Meinholz [pro skater for Hopps] found a gallery space two blocks from the trade show.” Instead of opting for salesy trade show gimmicks, the SoHo space held a pop-up art show that included works by skaters involved with Theories including Soy Panday, Jean Feil, Pep Kim, Jahmal Williams, Pontus Alv and Quim Cardona. Not only did Stewart’s idea tap into the brands’ mindset, it was cost efficient and leveraged the Agenda crowd.

But the folks running Agenda thought differently. In their eyes, Theories was co-opting their crowd; a curious take, since the show itself was low on local brands. Stewart was barred entry to Agenda for what they viewed as a stunt. He concedes it wasn’t an intentional ‘fuck you’; it came down to finances.

“I knew it would cause problems and I was uncomfortable doing it,” he says. “I don’t like burning bridges – I’m not the punk type. In my opinion, they [Agenda] should be making some exceptions to get the local brands involved. We wanted to be there, but couldn’t afford it and weren’t offered a deal, so we found our own thing.”

The battle for Stewart to establish a new model in skateboarding is a familiar one. As a seventeen year old, based in off-the-skate-radar Florida, it was a challenge to get his videos stocked and seen. By the time he dialled in his process in the early 2000s, the DVD industry had crashed from online piracy.

Going from videographer to distributor might seem like a non-linear path, but Stewart’s vision has remained fixed. As a teenager he eschewed a career as a professional skateboarder (his brother was sponsored by H-Street and Life) and stayed behind the camera lens.

“I understood early on how important style was,” he said. “I did well in a few contests, but I knew my style wasn’t offering anything rad. It felt like I could make more of an impact making videos and showcasing other skaters.”

Contextualising others’ imagination is Stewart’s talent. His videos are informed by feeling, not tricks. He was captivated and sucked into skate videos before he ever set up a board, with his brother having watched them incessantly. Stacy Peralta’s Powell Peralta videos made an impression, but it was Alien Workshop’s Memory Screen (1991) that completely revolutionised his view of the medium.

“Memory Screen was the most conceptual video project in skateboarding,” he says. “Most of the video isn’t even skating, but rather a masterpiece of editing. It’s one of the best examples of early branding; of capturing your imagination through the art direction.”

Because Stewart is multi-disciplined, he contributes more to Theories than just selling product, cultivating a stronger identity for everyone under the umbrella. It’s a lean operation, run out of a raw industrial space in Greenpoint, Brooklyn, one of the few affordable areas left in the borough. Sandwiched between several production houses that film network TV crime shows, warehouses filled with marble, and the occasional new construction condo monstrosity, Theories is an enclave for the outliers.

Having put out the last Static, which Transworld Skateboarding awarded ‘Video of the Year’, Stewart is channelling everything into Theories of Atlantis. Knowing the value of content and how it keeps brands relevant, coupled with the physical stress constant filming’s caused his back, he’s now better suited for shorter video projects with a quick turnaround.

“You can’t have a brand just because there’s a rad artist behind it, and have it next to [Philadelphia’s] Ricky Oyola’s brand [Traffic]; someone who spent over twenty years giving a region of the US their identity,” he says. “This distribution company is just a different facet of what I’ve always done – recognising people whose skating has a magical quality and bringing that to the rest of the world.”

This article originally appeared in Huck 49 – The Survival Issue.

Grab a copy now to read the issue in full. Subscribe to make sure you don’t miss another issue.