Outdoor / Skate / How do you feel about Paul McCarthy’s poo-smeared skateboards for charity? 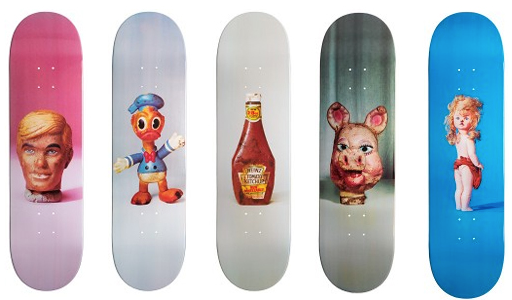 Controversial American artist Paul McCarthy has teamed up with art social enterprise The Skateroom to produce a series of decks that will be sold to raise money for Skateistan’s new skatepark in Johannesburg, South Africa.

Artists putting their work on skateboards is not exactly a new idea – Supreme has famously done a bunch of high-brow ones featuring the work of New York typographical painter Christopher Wool, the images of Larry Clark and graphics by richest-living-artist-of-all-time Damien Hirst – but getting Paul McCarthy on board (excuse the pun) is pretty next level.

I first encountered McCarthy’s work at the Tate Modern in 2003. I was only sixteen and I honestly feel like that exhibition was the end of my innocence – particularly a video called Tubbing (1975) where McCarthy sits in a bathtub eating and smearing and vomming raw meat. The world is gross, I realised, and lots of things will never make sense.

The images on the decks of the Skateroom project (of which there are only 250 produced) are from a series of photos shot in 1991 of objects from performance art pieces McCarthy enacted between 1972 – 1983.

According to his gallery Hauser & Wirth, the performances were seen initially by only a handful of people and were “raucous, riotous parodies of society, relationships, sex and pop culture, which tested the physical and mental boundaries of both the viewer and the artist”. Things went in weird places and fluids came out and the audience were left holding their heads and chanting, like Marlon Brando in Apocalypse Now, ‘The horror. The horror. The horror.’ Think GG Allin meets Marina Abramović.

And now the artefacts of that Earth-shattering experience are sitting quaintly on skateboards that will enable kids in difficult situations to escape their own kind of horrors. For a man that’s dedicated his life to exposing the grotesque hypocrisy and repression in consumer-driven American society, this feels like a satisfying full circle.

When brands everywhere are desperately using skateboards to sell their worthless crap, there is something refreshing about a pooey board for a good cause. Don’t you think?

You can purchase a Paul McCarthy skateboard on the Skateroom website.

Linkedin
RELATED ARTICLES
OTHER ARTICLES
The 'Godfather of Conceptual Art' is back with new work exhibited in London and Paris and it's as funny and subversive as ever.
Want to see Andy Warhol's cookie jar collection or Damien Hirst's stash of taxidermy? Check out the new Magnificent Collections show at the Barbican.
Art and photography that looks back on moments of conflict to consider the ongoing effects on people and places in the shadows of these traumatic events.