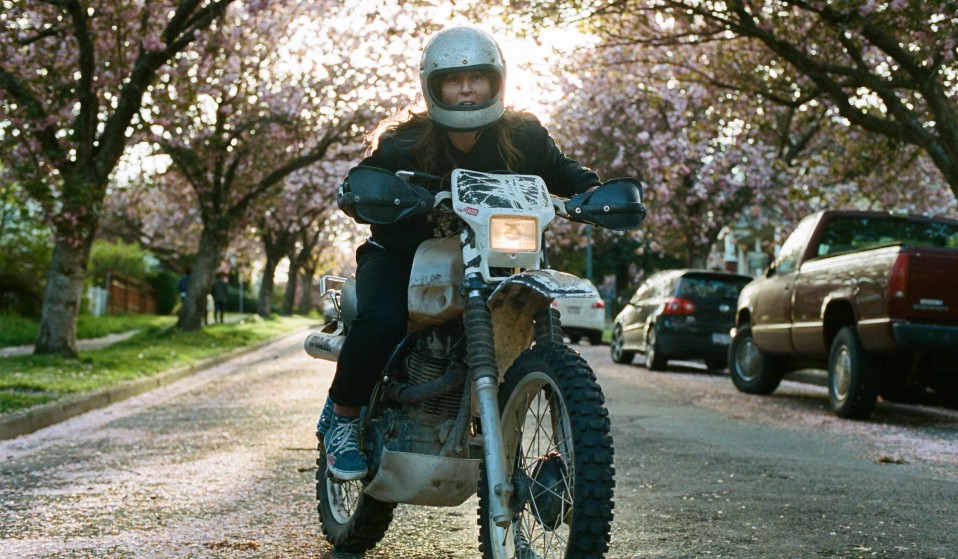 Skater, motorbiker and owner of Antisocial Michelle Pezel shares how independence is something you can only achieve as part of a community.

In the latest story from Levi’s® Skateboarding Special II: Stories of Independence — our annual Skateboarding collab with Levi’s® — skater, motorbiker and owner of Antisocial Michelle Pezel shares how independence is something you can only achieve as part of a community.

After spending a few days sleeping on Michelle Pezel’s couch in Vancouver I have a pretty good idea of her daily routine and it is firstly, hardly routine, and secondly, seemingly exhausting. Aside from spending most days working at Antisocial Skateboard Shop, which she co-owns with pro skater Rick McCrank, she rarely does the same thing two days in a row, and sleeps as little as necessary.

Michelle fills the hours with her countless hobbies and passions, none of which involve computers or the pervasive invisible worlds associated with Twenty-First Century technologies. Walking in to the front door of her house, you see a shelf filled with sparkly and colourful vintage motorcycle helmets on its left side, and analogue cameras of every shape and size on its right. Her large living room is crammed charmingly with books, ‘zines, plants, knick knacks and hundreds of records (the spines shredded up by her cat Bits). She’s got a small collection of those owl-shaped candles you see at the thrift shop on the windowsill and a dozen Chia Pets stacked atop a bookshelf. The walls are covered in photos of travels with friends, as well as artwork by Ed Templeton and others who’ve exhibited at Antisocial’s gallery space since 2002. This is home decorating you cannot buy with money, only with time and love. 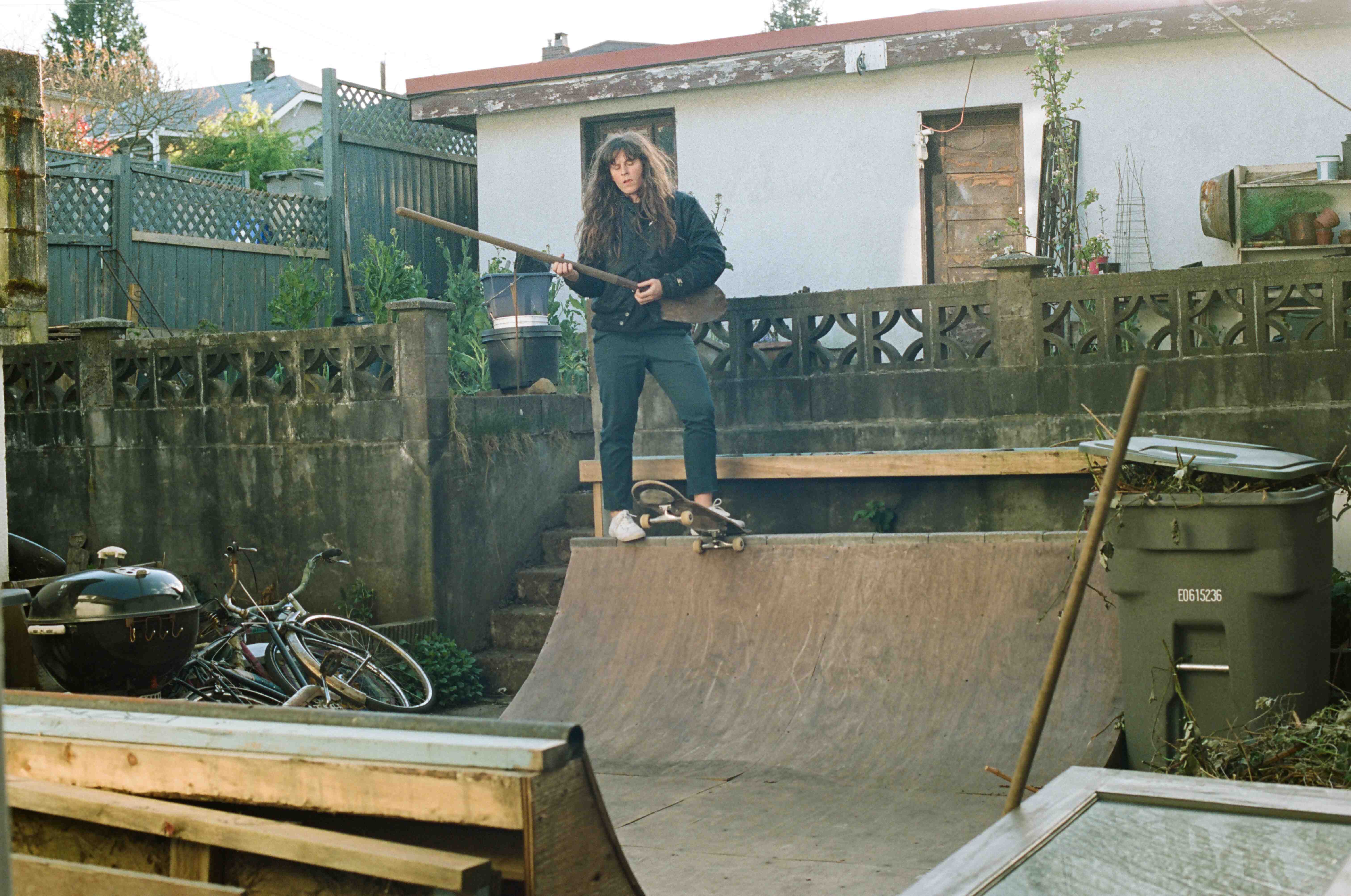 Sometimes Michelle starts the day tending her backyard garden, other days she makes a tofu scramble for friends, or heads out early for a meeting with the city council to advocate for more skateparks. In the evenings she goes skating, jams with her new band, or checks out an art/music show. On days off she’ll head out of the city on her motorbike to do some hiking and camping. If you were to ask people in Vancouver’s skateboarding, arts or motorcycle communities who the most independent lady they know is, a good number would say Michelle Pezel – both because of how she lives, and how well known she’s around the city. Spending thirteen years as her own boss at Antisocial has been a long-term commitment, but it’s come with a lot of freedoms.

“Mostly, every single day, I’m like, ‘I’m okay to go to work today,’ because you can kind of choose how you’re feeling that day when it’s your shop. For other people it’s different,” says Michelle while we sit in her sunny living room one morning, eating oatmeal and drinking homemade smoothies. “So I’m lucky as all hell, but I still have to work every day.” 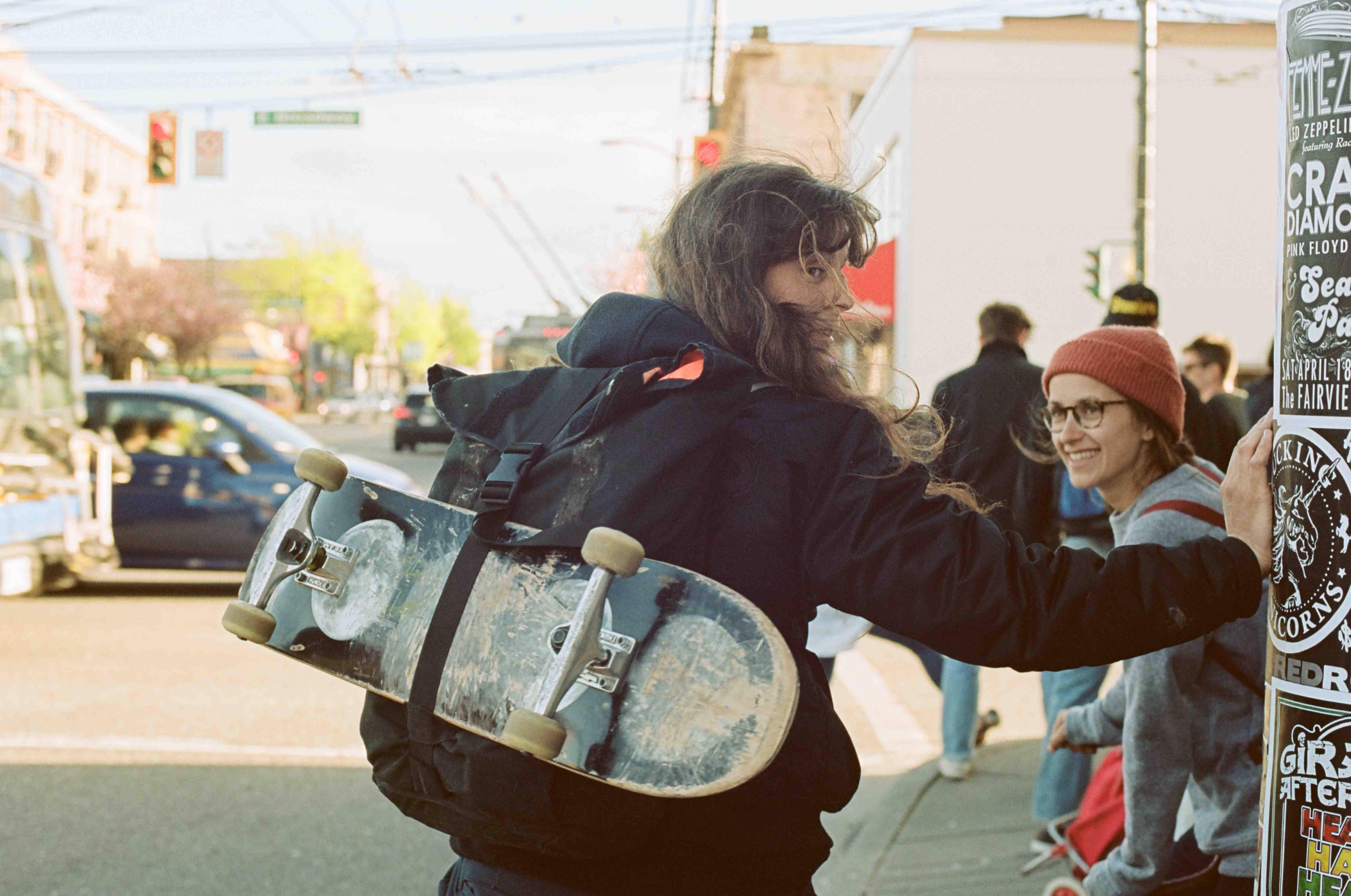 Modern living is very much based on individuality and a nearly paralysing array of choices, but the majority of people still tend to live their lives according to the ideals and expectations of larger society – school, job, car, marriage, house, kids. Something along those lines. For Michelle, living an independent lifestyle comes down to how you build your life. “If you don’t have mortgage payments or car payments or children you can kind of live and be a bit freer,” she says, pointing out that it’s a trade off. “You give up things for independence: I want a dog but I’m not gonna get a dog. I know better. I like to get off work and go do what I want to do.”

Vancouver, Canada, is one of those rare cities in the world where alternative lifestyles and subcultures are deeply rooted, attracting those who don’t fit in elsewhere. It’s a place where you can go to a skatepark and know you won’t be the only old dude there. And despite increasingly absurd rents, a community of artists, photographers, activists, musicians and small business owners are able to live in a way that some might view as a hippie delusion or refusing to grow up. For Michelle, who was born here, it’s the perfect place. “I think a lot has to do with where you are and maybe that’s why I stay here, because there’s like-minded folks around. I sometimes feel like we live in a little bubble because there’s lots of craziness that goes on in the world but we kind of stick to our little people and have fun,” says Michelle, who’s never used social media, except for work, and prefers to stay connected face-to-face. “I feel like that’s the only way to be alright on the planet in the year 2015, because otherwise I don’t know if I would be able to be happy. It’s really intense out there.” 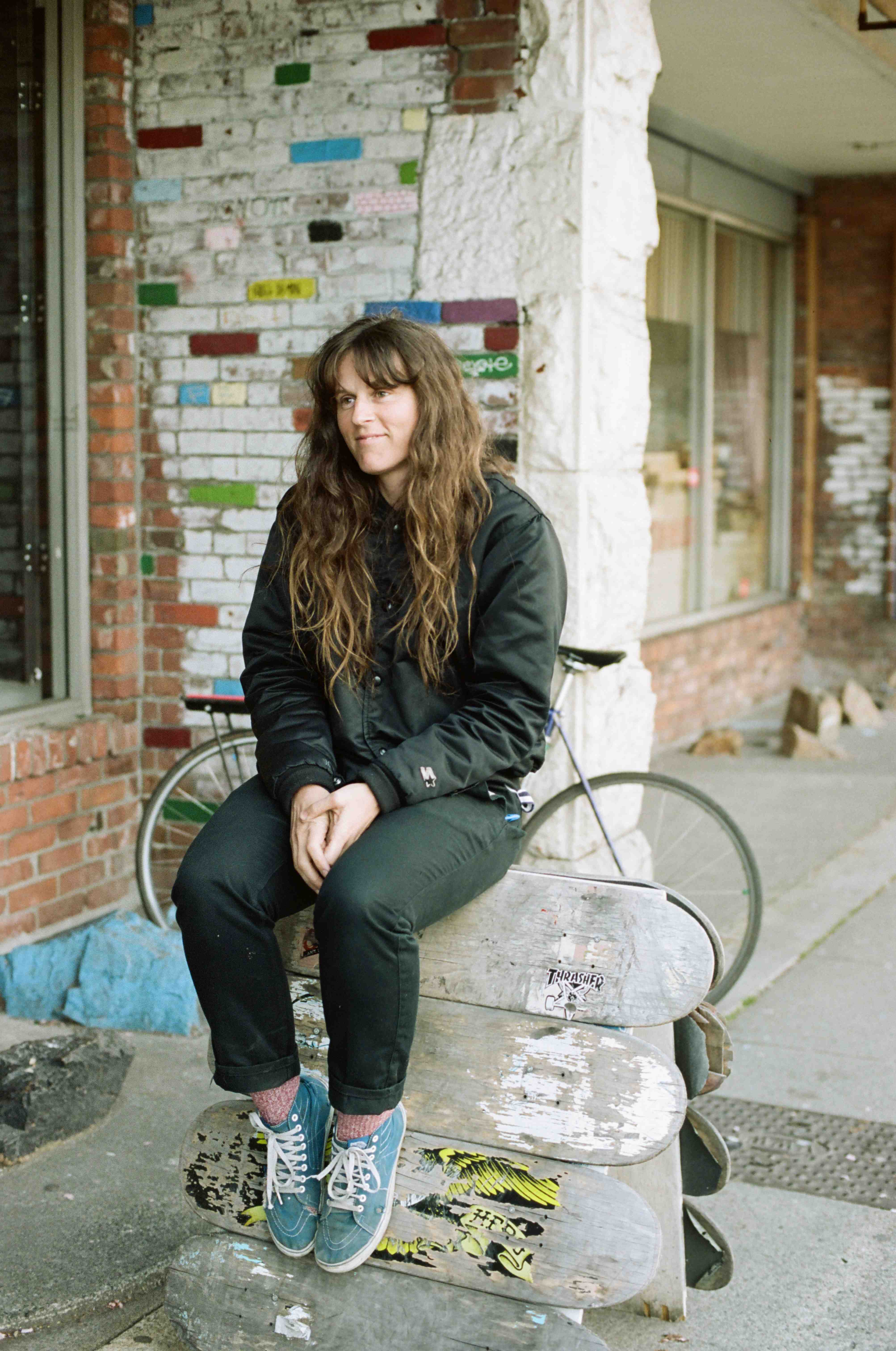 Michelle first started skateboarding aged fifteen. She wanted to start earlier but her mom didn’t want her to do “what the bad kids did”. One day Michelle went on a road trip with the bad kids and came back with a skateboard. She was also doing ballet and playing soccer, but she says that, “Skateboarding was fun and different, and I didn’t have to be somewhere at a certain time or get yelled at for not wearing the right outfit. There were a lot of things that made it a little more freer, and you were hanging out with the kids that people didn’t understand.”

Ten years later, she got into motorcycles through friends she met skating. In the early 2000s, Rick McCrank, Keegan Sauder and others started to buy vintage Japanese motorcycles, converting them into cafe racers and dodgy rat bikes. The simple mechanics, cheap parts, and reliability of the ’70s Hondas and Yamahas caught on quickly, with dozens of Vancouver skateboarders getting bikes and hitting the road in search of new skateparks and scenic rides. “It’s a really awesome way to get out of the city and go camping,” says Michelle, reflecting. “It gets you to cool places.” 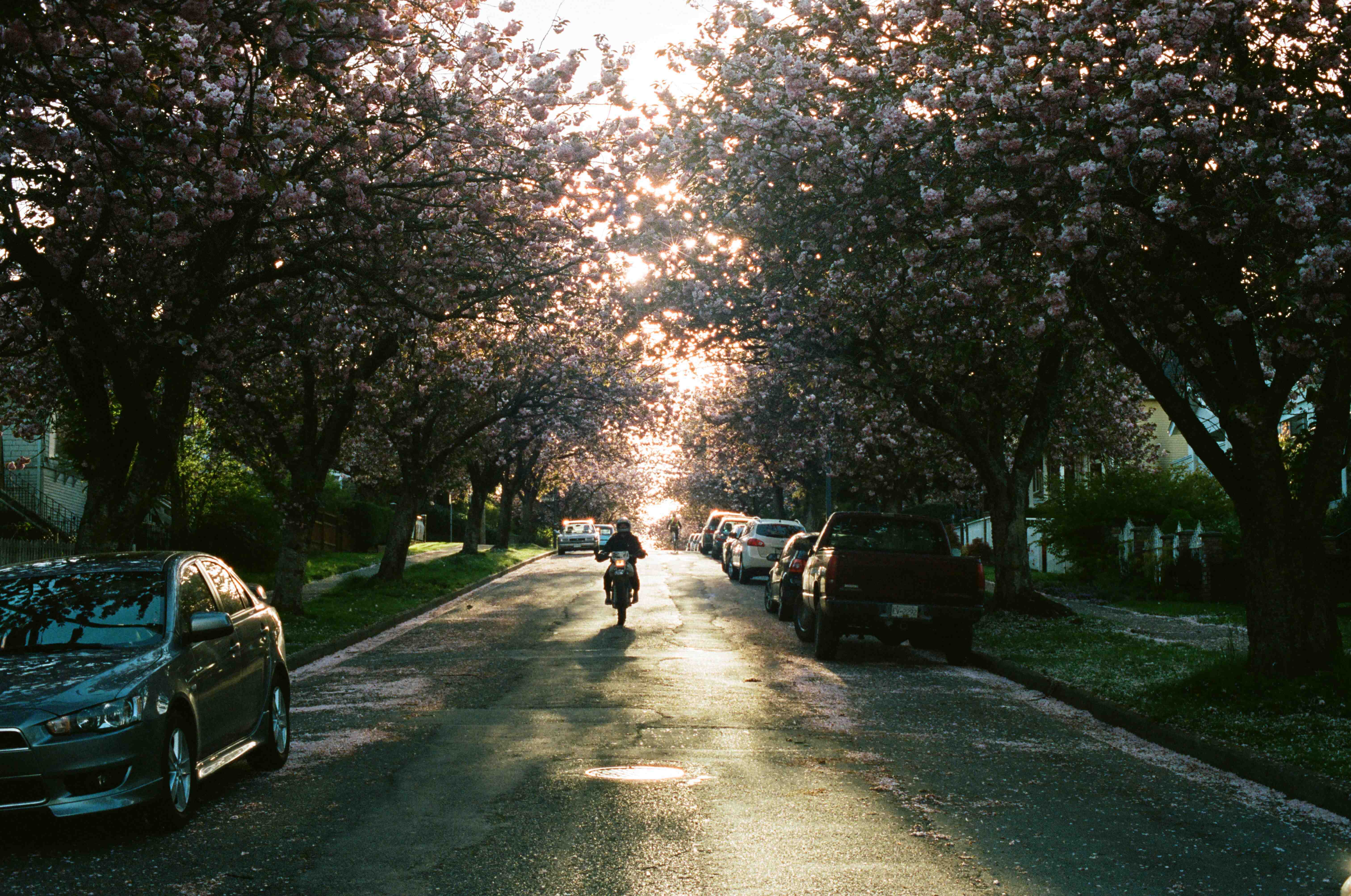 On a sunny day, Antisocial usually has a couple motorcycles parked out front, and the general vibe is more like a clubhouse for kids of all ages than a place of commerce. Some affectionately call it “the vortex” because you stop in there and end up spending hours shooting the shit with other lurkers. Michelle had the idea to open the shop after a six-month road trip around North America with a few friends. Local shop owners would take them to skate spots and let them crash at their houses and she realised that Vancouver didn’t really have that going on. And while she’d never heard of a skate shop with an art gallery attached, Michelle saw a lack of art spaces in the city too. “Arts and culture are big in skateboarding for me and they weren’t being represented in Vancouver at all,” she says. The initial location was 370m2, with a massive gallery and a mini-ramp. Antisocial quickly became a cultural institution, featuring art shows, music and skate events almost every week. In 2007 gentrification doubled the rent and the shop moved to a smaller space a block away. There’s no room for a ramp now and the gallery is much smaller but Michelle still holds regular events.

Despite losing some physical space the community vibe of the shop continues to grow each year. “We can actually reach out more to the community when we have to do things outside of the shop, so it’s kind of cool,” she says. Michelle is diplomatic, chatty, and seems able to relate to just about anybody. She has a natural influence that she uses as a force for good, whether it’s representing the skate community at city council meetings, fighting to protect the Leeside DIY skatepark built in memory of a friend who was killed by gun violence, being the first skate shop with a float in the pride parade, or donating skateboards to youth in a remote aboriginal community on Vancouver Island. She says that Antisocial is actually the opposite of its namesake: “We want to hang out with everybody!” 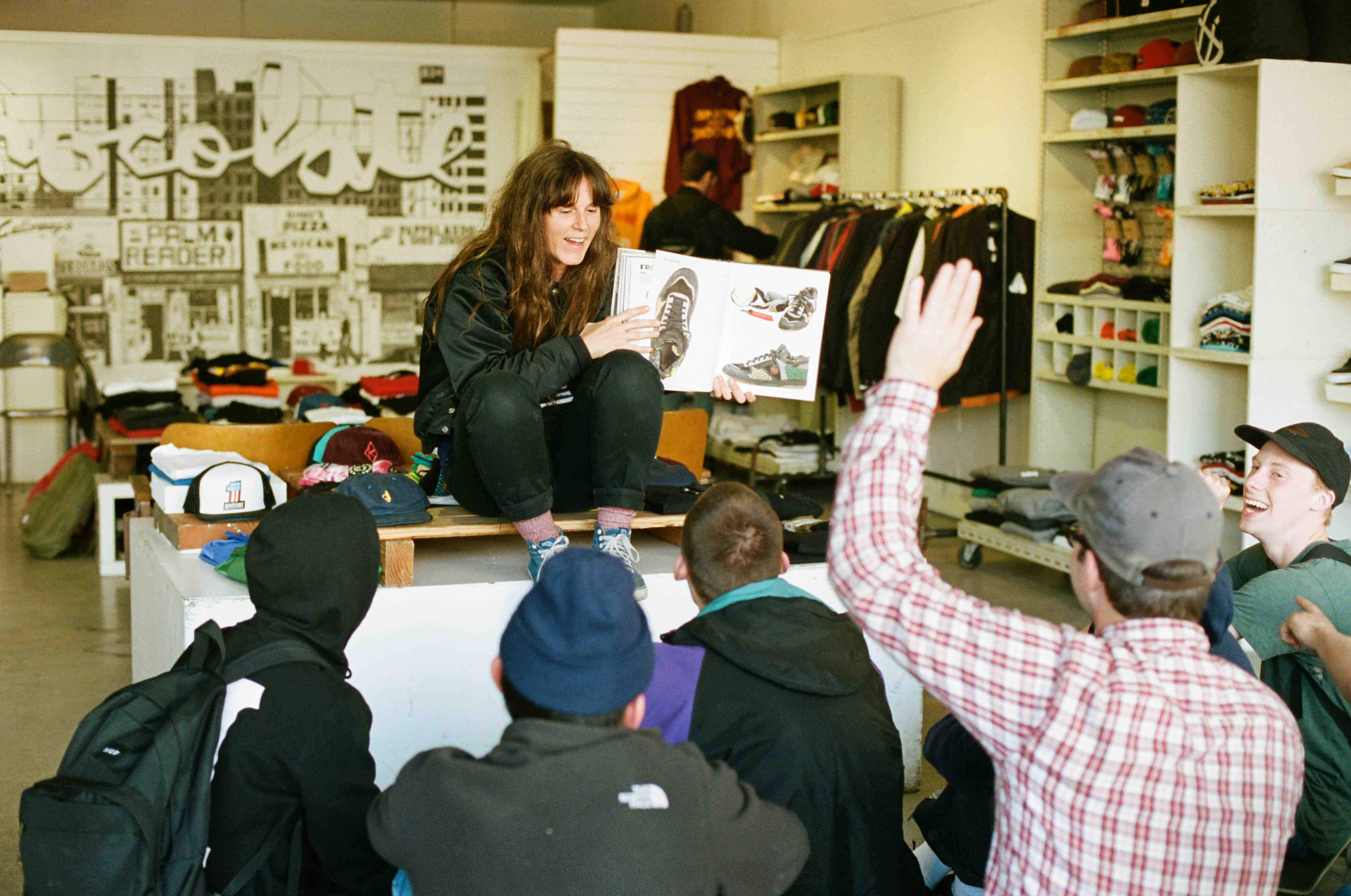 Hermann Hesse wrote “solitude is independence” – yet Michelle doesn’t relate to this idea at all. For her, independence is all about community. Without her friends she would never has started skating, riding motorbikes, travelling, or opened her skate shop. She likes the freedom of being able to do her own thing, but can’t imagine doing everything she does solo. When I ask her what she’d do if she wasn’t running Antisocial she says it would probably be farming, because you have the same combination of individual freedom while being part of a really great community. “You only have independence because of your friends,” she says before heading off on her bike to another day at the shop. “You get confidence from your friends, and everything’s funner with friends. There’s not much I wanna do by myself.”

Linkedin
RELATED ARTICLES
OTHER ARTICLES
Over the weekend, London locals came together to resist a pre-planned police raid targeting delivery drivers.
To mark the anniversary of the mass trespass of Kinder Scout, a group of hikers came together with the intent of creating a new, fully inclusive culture for rural spaces.
A group of Ukrainians living in Poland are helping Ukraine withstand Russia’s brutal invasion by buying supplies and shipping them directly to the war’s frontlines.
Photographer Robin Graubard’s debut book offers an unflinching record of turbulence and change across the Balkans.
After news broke last week around an expected reversal of the 1973 landmark law that made abortion legal in the US, protestors gathered in the UK in support of American women.
In the latest OFFF Dispatch, the enigmatic designer dives into his process, connecting the dots between his unique and varied creative output.