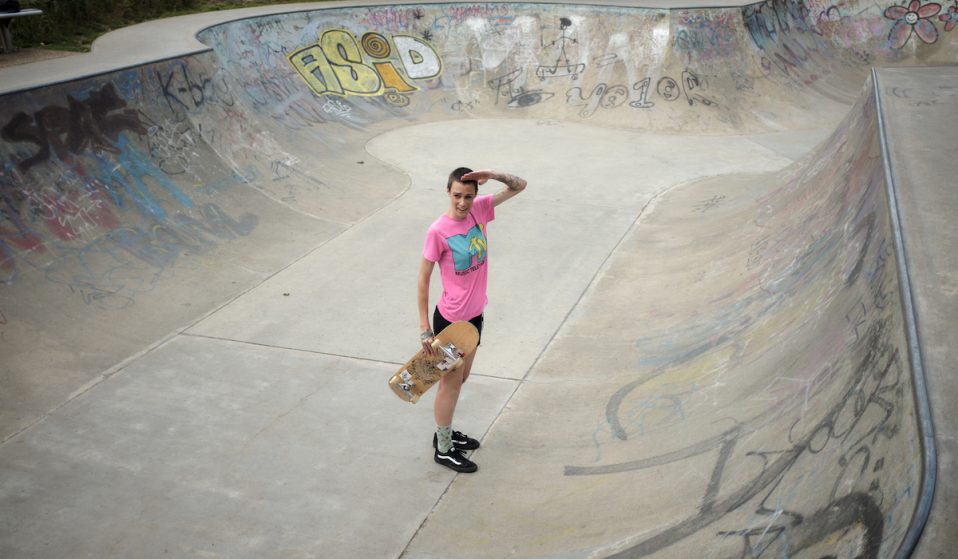 Rae Smith grew up not realising she was born intersex, leading to years of emotional upheaval where she kept her true self secret. Then she found skateboarding.

Rae Smith grew up not realising she was born intersex, leading to years of emotional upheaval where she kept her true self secret. Then she found skateboarding.

On a graffiti-covered skate spot in north London, skater Rae Smith is eating toast on a nearby patch of grass. With her shaved head, long limbs and neon pink board, the 35-year-old is a familiar face around here. She’s warm, watchful and quick to smile – fist-bumping everyone who drifts past holding a board.

Rae skates here most afternoons, when she’s not organising all-inclusive, beginner-friendly skateboard meetups around London or recording conversations for her YouTube vlog, ‘Keep Pushing’. Her Instagram account frames snippets from a life: the hype of nailing a new trick, bloody elbows from slamming into concrete, post-skate pizzas. But you’ll also see her talking about deeper, more personal issues, like the highs and lows that have come with openly claiming her identity as an intersex woman.

Over the last decade, there’s been a wave of new groups and initiatives supporting PoC and women skateboarders. More recently, DIY zines and collectives have begun to reach even further, giving visibility to non-binary skaters and others in the LGBTQIA+ community. But some identities, like being intersex, remain more marginalised than others.

Intersex is an umbrella term for people born with variations in sex characteristics that fall outside of traditional conceptions of male or female bodies. The runner Caster Semenya’s recent ban from competing in certain women’s events due to intersex traits highlights the lack of public understanding of the identity. It certainly wasn’t a word that Rae heard as a kid growing up in Essex, and there were no indications early on that the concept applied to her. While she was bullied throughout her childhood for looking androgynous, it wasn’t until Rae’s teens, when her body didn’t go through puberty, that she felt that there must be some explanation for why she felt so different.

When Rae went to the doctor, she was told that it was her low body weight halting her development. But she kept going back until tests finally revealed that she had Swyer Syndrome. This meant she didn’t have the same hormone levels as most women and the glands that usually develop into ovaries in girls hadn’t done so.

She was given surgery and hormone replacement treatment, then advised to pretend that nothing had ever happened. The word “intersex” wasn’t used; nor was she made aware of any link between the syndrome and her androgynous appearance. “If you ever need to explain the surgery scars,” doctors said, “tell people you had cancer.” And that’s exactly what she did.

“It was really stressful living this charade for 30 years,” she remembers, ignoring the tears in her eyes, fiercely intent on explaining her experience precisely and fully. “You can’t get close to people when you’re lying about who you are.” 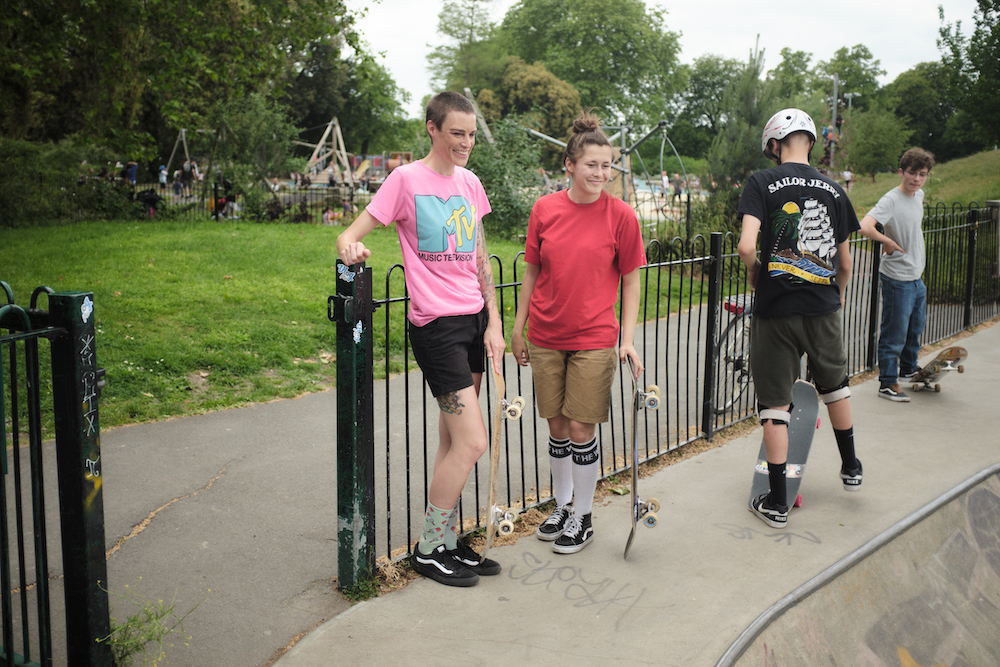 Around the same time, Rae connected with Christianity, turning down an opportunity to study English at university in order to become a youth worker at her church, then studied drums for a year at a Christian music college. Still tormented by a feeling that she was somehow “wrong”, she invited an American faith healer to visit and “heal her” of being intersex: a process that involved months of preparation, prayers and rituals. When it didn’t work, she says, “I rejected my faith and the church, and went off the rails the other way.”

Rae went on to play the drums for various touring indie bands while working as a model and living a party-hard life, before quitting music altogether aged 26 in favour of an animation degree at London’s University of the Arts.

But it wasn’t until a couple of years after she graduated, at 31, that she finally found the courage to buy a skateboard. It was something she’d felt drawn to ever since she was a kid, but it always felt too vulnerable to try. “It was like showing people who I actually was,” she says. “And every time I’d done that in the past, it had been disastrous.” Once Rae finally tried it, she remembers thinking: “I didn’t want to do anything else ever again.”

The skate community felt like a loving and supportive hub in many ways, yet it still felt like there wasn’t quite a place for her within it. That’s how Nefarious, the women’s skate collective she co-founded, came about. It grew to around 30 members, but after about a year, Rae started to feel burned out from being so plugged into the scene. When she was offered a job teaching art at an international school in Vietnam, she took it, spending two years skating after class every day, learning to ride a motorbike and making art – thousands of miles from everyone she knew.

Then, in 2017, something clicked into place. Rae happened to see a news story about the Belgian model Hanne Gaby Odiele, who had come out as intersex. “It completely changed my life,” she says. It took a while after that to find the courage to do the same thing, but in 2018, just after returning from Vietnam, Rae posted a message on her Instagram page explaining her own identity. “Finally, now that I’ve learnt the word intersex,” she wrote, “it’s like someone gave me the gift of being allowed to exist.”

“It was heart-attack territory,” she says about sharing the post. “I was embarrassed that I’d lied about it for so long. I was worried about ex-boyfriends being angry at me for not telling them. Was any guy ever going to date me again? Would I still be allowed at girls’ skate events? I had no idea how people were going to react.” 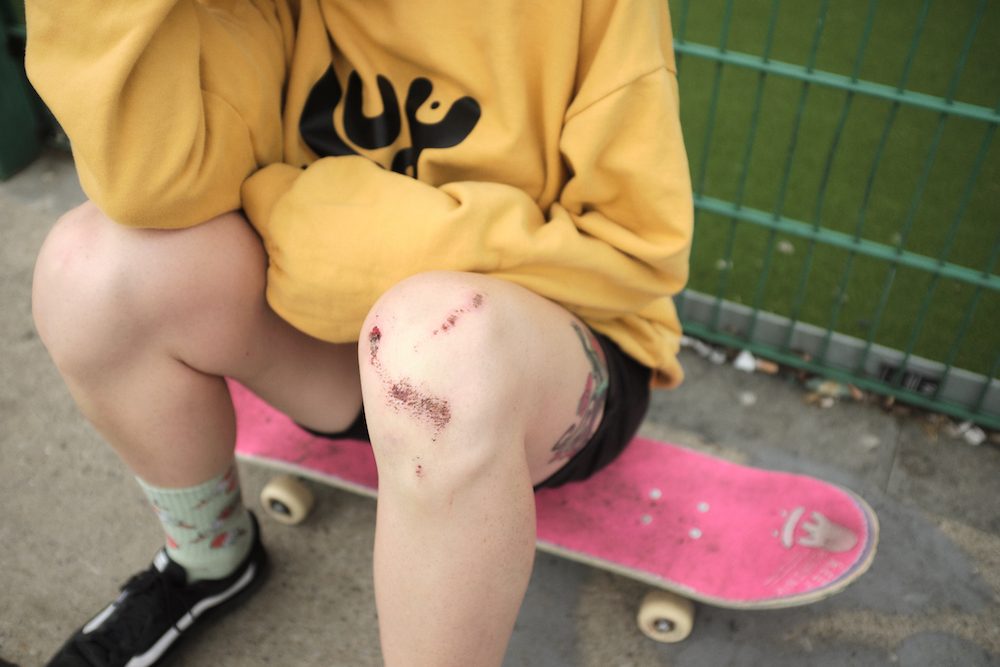 Although not everyone fully grasped what she was telling them and what it meant to her, the responses were “overwhelmingly positive”. Hanne Gaby Odiele was among those who sent messages of support. Rae now puts her identity upfront online – her Instagram bio reads ‘intersex artist skater’ – and is willing to talk about it with anyone who asks.

Skateboarding has played a huge role in this whole process, she says, even if it felt like she had to carve out her own community within its wider subculture. “With skateboarding, you have to put yourself out there. You can’t skate alone in your room. That part of you that maybe you want to hide has to become visible.”

“It has empowered me 100 per cent to start being open about being intersex, and I feel that’s an ongoing process. I still feel anxious all the time and I’ve got a long way to go with so many things, but I also feel a part of something, and that’s snowballing.”

The Keep Pushing meetups Rae runs are about supporting all skaters regardless of age, ability, sexuality, gender or race. As the website specifies, Rae doesn’t want anyone else to wait for as long to get on a board as she did.

“Now that my barriers are coming down, I want to tear all the barriers down. Let’s just be our weird selves, and be there for each other.”

Rae Smith is curating the Bodies Exhibition at Grow Tottenham this September. You can also find out more about Keep Pushing on Instagram.

Linkedin
RELATED ARTICLES
OTHER ARTICLES
The group’s leader and cofounder Randy Savvy talks nurturing the next generation of riders and keeping Black cowboy culture alive.
Following the release of his newly republished 1991 book, Redheads, the American photographer reflects on his celebration of ginger people and their magnetic power.
The government’s failure to take long Covid seriously has led to the formation of a group campaigning for the thousands of forgotten victims of the illness.
Following the release of his latest album God Don’t Make Mistakes, the rapper talks horror villains, police brutality and being unafraid to show his vulnerable side.
Over the weekend, London locals came together to resist a pre-planned police raid targeting delivery drivers.
A group of Ukrainians living in Poland are helping Ukraine withstand Russia’s brutal invasion by buying supplies and shipping them directly to the war’s frontlines.