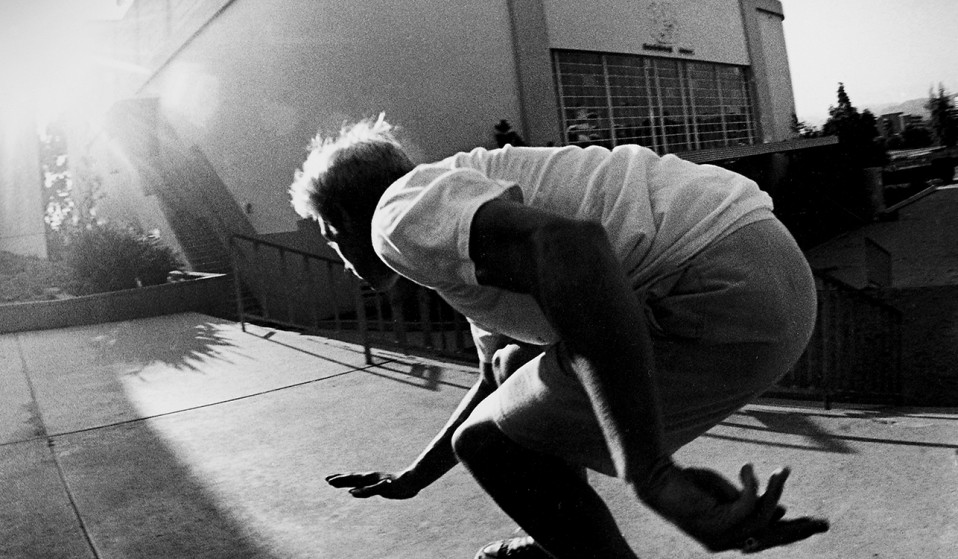 From pioneering tricks with his buddy Mark Gonzales, to inspiring each new generation of groms: Natas Kaupas has never fallen out of love with the feeling of rolling around.

From pioneering tricks with his buddy Mark Gonzales, to inspiring each new generation of groms: Natas Kaupas has never fallen out of love with the feeling of rolling around.

Press play on the latest Supreme or Polar video, and you’re likely to find a trick that was pioneered by Natas Kaupas. The wall-ride, the wallie, the slappie, the no comply – every skate rat who’s laced up a pair of Chuck Taylors in the past three years has sweated over these tricks, desperate to be #ontrend.

In other words: the cool kids have reclaimed ‘dork tricks’, and now everyone at your local park is popping one-foots. So what better time for Natas – the high priest of street skating, the no comply god, the king of curb dancing – to be inducted into the Skate Hall of Fame. The guy basically invented modern street skating along with Mark Gonzales, with whom he skated back in the ’80s. 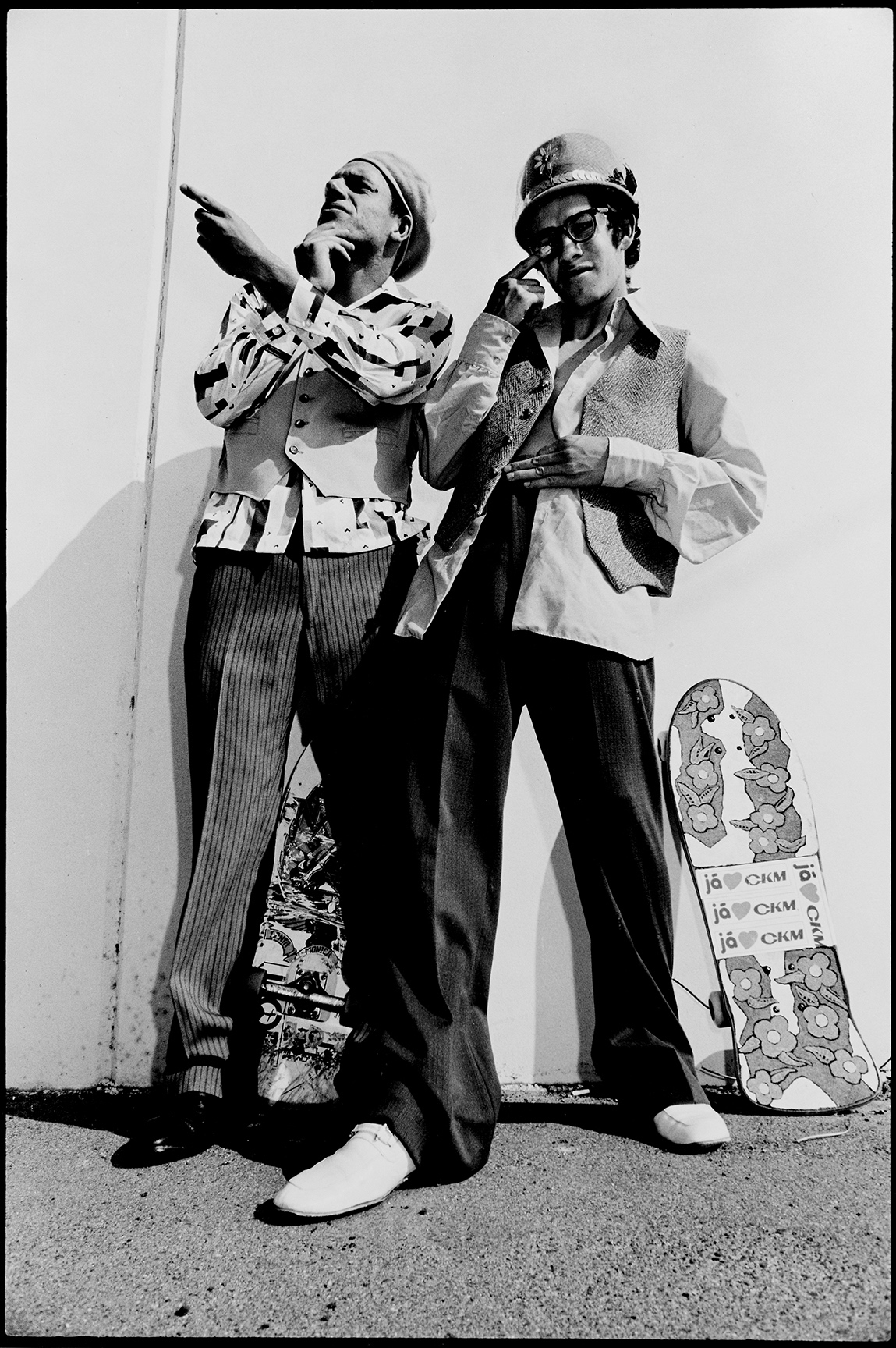 Like the Gonz, Natas has always veered towards the artistic end of skating, championing creativity and ideas as opposed to Street League gongs. In the ’80s, you were more likely to find him spinning on fire hydrants, or skating alone in a parking lot, than competing at a bowl contest, clad in pads.

That creative compulsion drew him to other arts – drawing, painting, photography – and today he art directs for Birdwell, while also freelancing for other companies. But he still has fun rolling around, he tells me from his Santa Monica home over Skype.

You grew up in Santa Monica, which is known for surfing as much as it is for skating. What came first for you: surf or skate?
Huh, good question. They were both at the very beginning – I was younger than three years old in the water, and riding skateboards on my knees and belly. They felt kind of the same at that time. Proper stand-up surfing probably came later for me though, when I was around seven or eight. 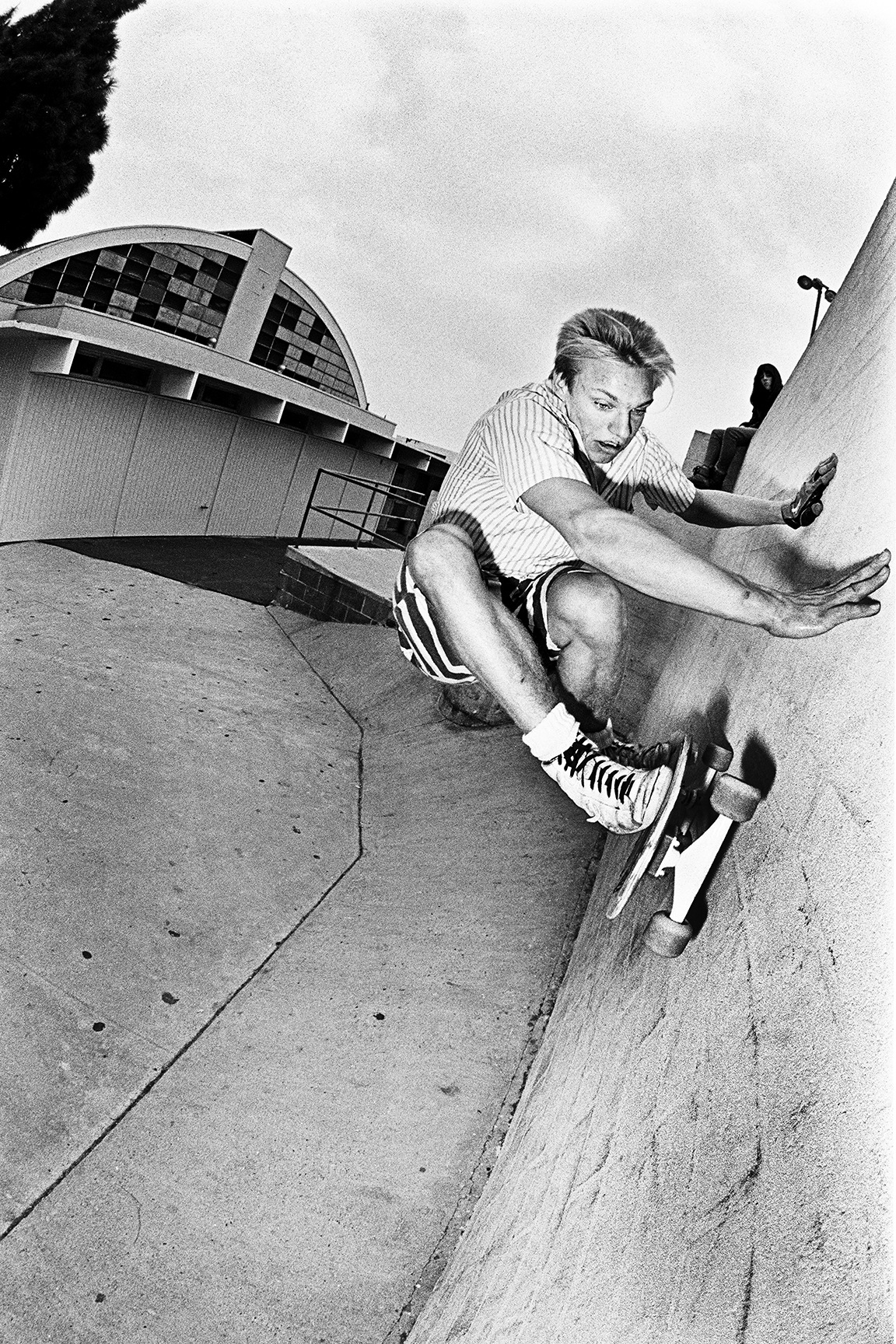 Santa Monica was pretty gnarly back then; what are your memories of it?
It was pretty bad. There was always the bigger kid who was like, ‘Hey, let me see your skateboard for a minute.’ That was the worst; you knew they were going to take off with it. It was a common thing. I still laugh with my friends, like ‘Hey, let me check that out’. It brings back these horrible memories, because anything you had out on the streets – your surfboard, your skateboard, your bike – they’d [just take off with it]. It was a sinking feeling.

Did you have many boards stolen that way?
No, but I did bomb the steepest hill I’ve ever skated. This guy grabbed my board from me, and right when he was turning to go I ripped it out of his hand and just bombed it as fast as I could, way faster than I wanted to go, just to get away [laughs].

In Santa Monica, skateboarding was really woven into the fabric of growing up; everybody did it. It was how you got around from place to place, and the places where everyone met – like Bay Street, which was made famous in the Dogtown documentary – you’d go there and there’d always be somebody. But before that, by the time the 80s came around, no one was skating [laughs]; I was definitely the only one. It was pretty rare to see someone else that was trying to do actual tricks.

You didn’t really follow the trends in skating at that time – pools, ramps, etc. – you skated the streets, which was way less popular at that point. Did you feel different to other skaters in that regard?
Not really, because I was so young. The thing is, I would’ve skated that stuff if I could’ve. My parents would give us rides to the local park – Runway, it was called –and there were a couple of others, but they were hard to get to.

So I just ended up skating around the house. I went to a lot of the contests in the mid-80s, just to watch them. I thought it was really cool, but it was just like, I never really got good at it; I never got the hang of it.

In your Wheels of Fire and Streets on Fire parts the thing that stands out for me is that your skating seemed all about the journey from A to B, the flow of the street, rather than skating spots and hitting bangers. Did you see it as a cross-town ride?
Yeah. And it was also about what’s possible, optimising what could happen, what tricks could happen here or there; a lot of experimenting and seeing what’s possible. I definitely did that whole repetition thing too, though – skating one spot over and over. But I think I always liked having a bit of momentum, going with a bit of speed, and trying to cover distance or height, I just liked that feeling. 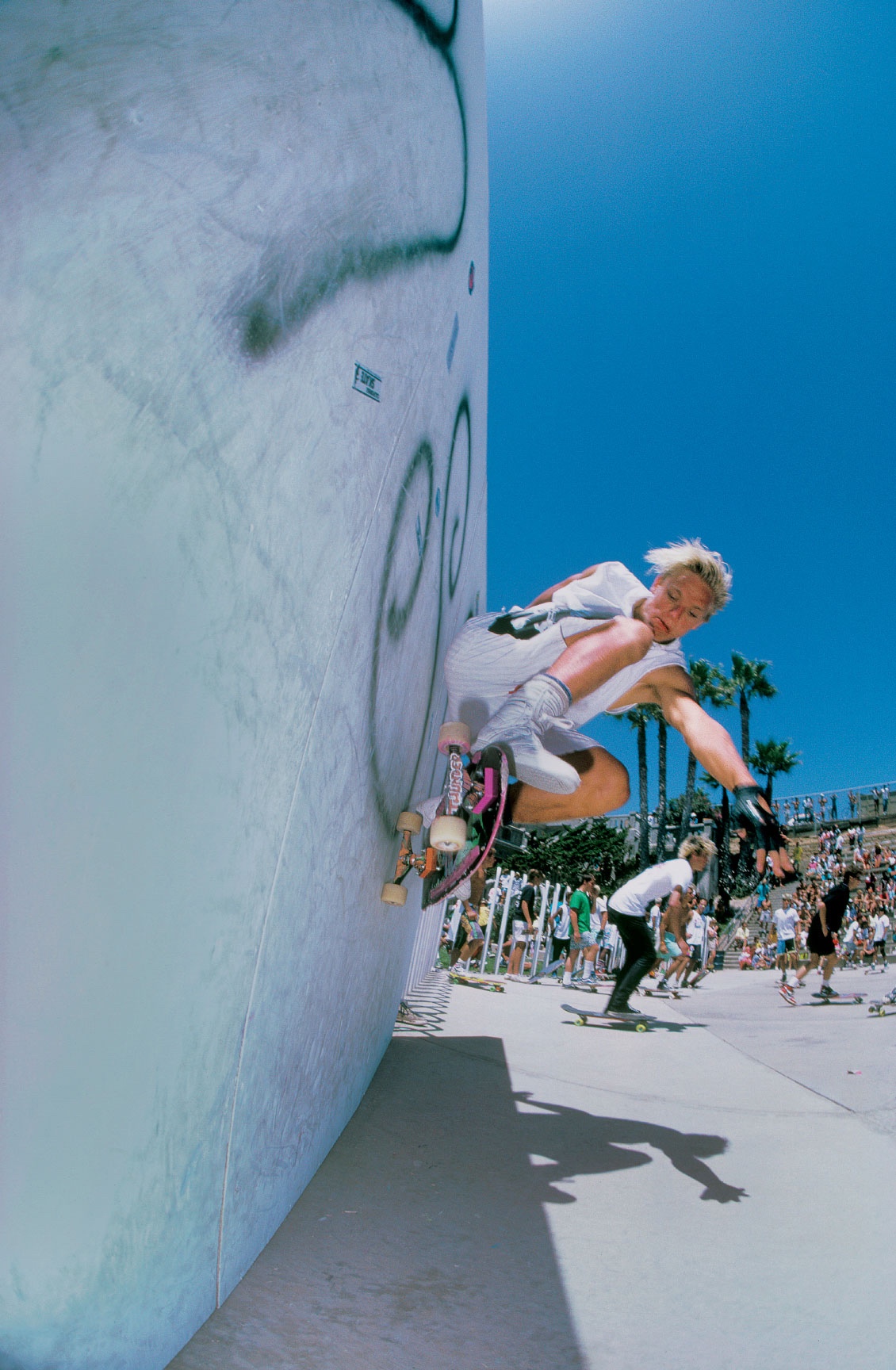 What was it like skating with Mark Gonzales back in the day?
We were introduced by a mutual friend, because we were both doing kind of similar things in street skating. We would hang out for a couple of days straight, skating around together.

Is it true that, until Mark told you, you didn’t know what a lot of the tricks you did were called?
[laughs] Some of them, yeah. We were both doing different hand-plants on benches, where you kind of lift up your board. He was doing his eggplant things, and I had no idea what those different variations were at all.

Some of those 80s tricks – like wallies and slappies – have been making a comeback recently; is it cool for you to see kids do tricks that you pioneered?
Yeah, it’s great. I have friends with kids, I’m godfather to some of them, we go skating and I pull out a bunch of random 80s tricks and they love it.

What are your favourites now?
You can’t go wrong with a good old-fashioned lipslide. A lot of curb tricks are still fun – definitely the low danger ones, not so daredevil-y! But I don’t skate a lot now. I skate some parking lots, and sometimes on road trips I’ll stop at whatever park’s around just to try new places. 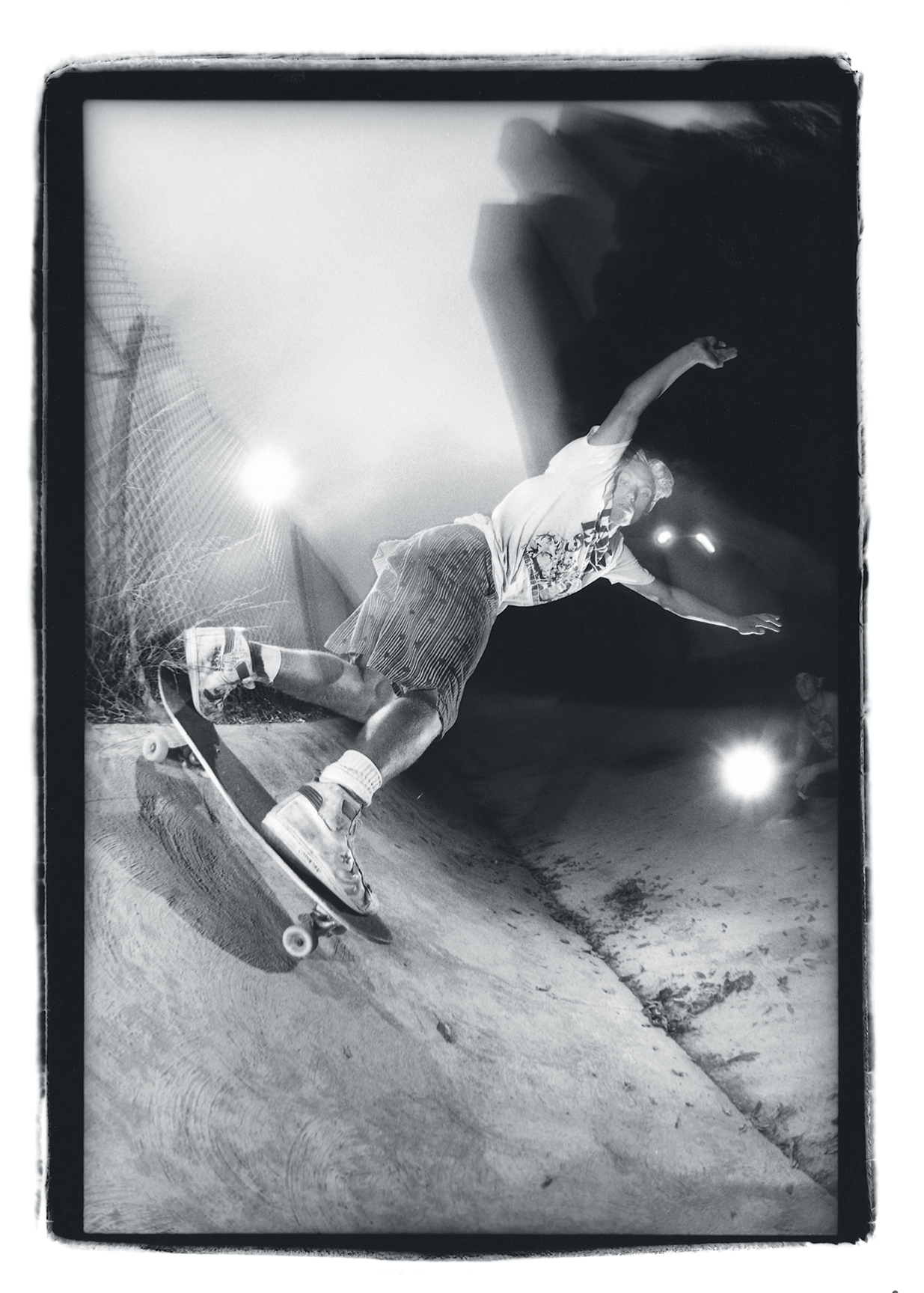 It’s hard for people to comprehend inventing a trick. Can you remember that process? Was it through happy accidents that you came up with new moves?
A lot of it was just by feeling. Pushing my body or my board into a certain place and thinking, ‘Well, I could kind of whip around this way and roll out of that’ or something along those lines. I learned from other people, too. I learned flatground caballerials because someone told me about them.

I was trying to picture it – I think Steve Caballero had done one at the Marina del Rey contest already. But imagine someone describing what he did: coming up backwards to the coping and then spinning 360 and landing forward back in the bowl without using his hands. And I was trying to picture how that worked, and I ended up learning them on flat because I didn’t have a ramp, spinning frontside just because it seemed more doable [laughs]. I think it’s in one of my first video parts, off a picnic table or something. 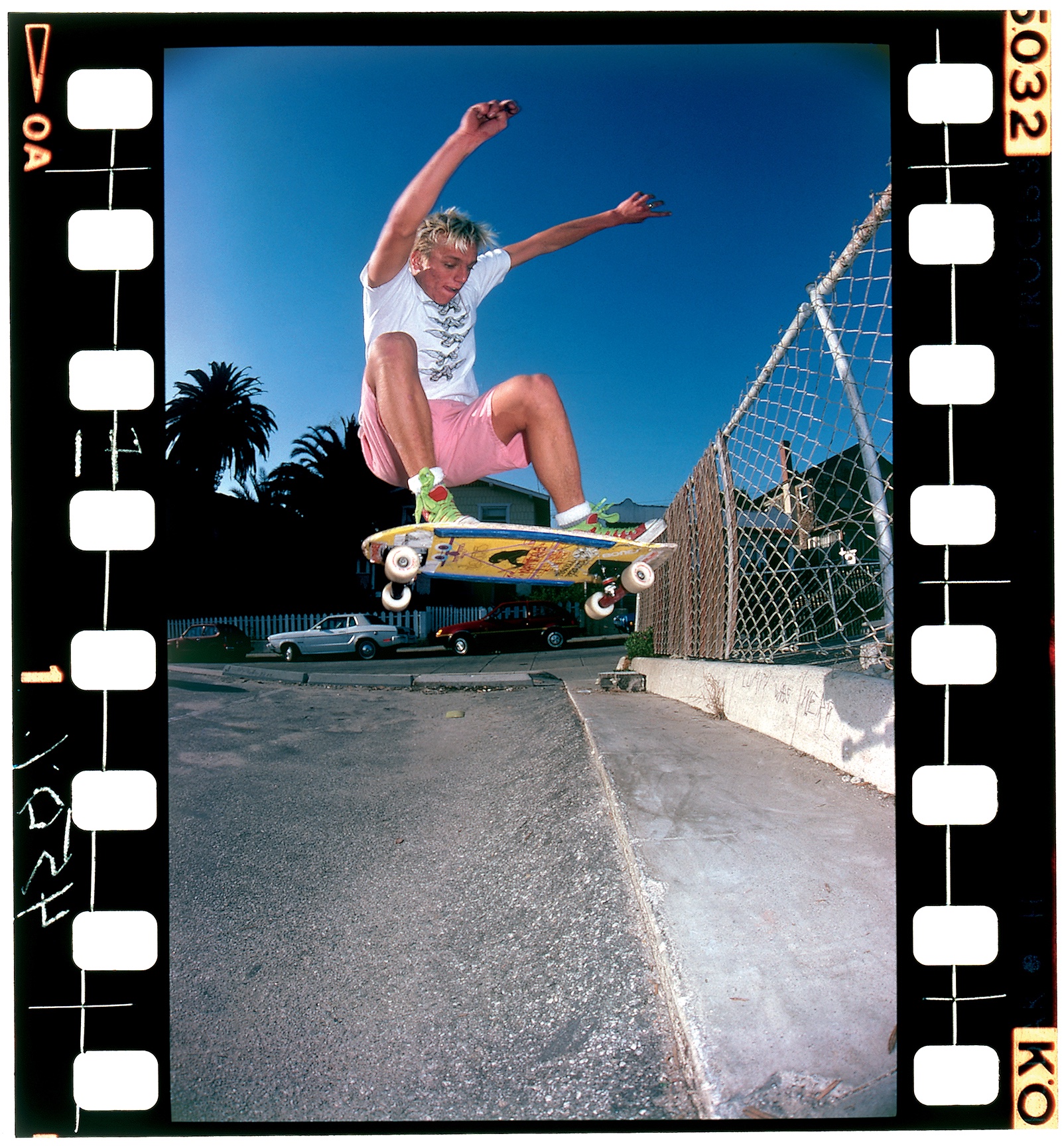 Skateboarding has come so far since then, where you have kids doing 360 double flips; do you think it can still progress?
It can always progress more. I like it when people figure out a way how to get tricks into the flow of a run, like Ben Raybourn, or some of the park guys like Grayson Fletcher and Curren Caples; I think that flow is really fun to watch, like maybe just one big kickflip instead of a triple flip or something.

You’ve been involved in art and graphics for a while now too, and you’re doing more today. How did you get into it originally?
It was really because of the ads I was in when I was younger; I wanted more control over that, and how people used images of me. A lot of the skate ads in the 80s were pretty bad and corny and it just felt wrong. So I started figuring out how to put all that together, and it progressed from there. I liked the Xerox look and that kind of evolved into that expressive graphic design, like Dave Carson, whose work had a lot of personality and was more artistic. That stuff was definitely a huge influence on me.

It’s often the case that skaters make art too. Why do you think that is?
There’s a simplicity to it. Not to generalise what art everyone’s into but with drawing, say, you just have a pencil and paper. And skateboarding feels the same way, because it’s such a simple tool, and it’s up to the user to bring out whatever they want – it can be expressive. It starts with picking up the skateboard. There’s no instructions – it’s up to you. 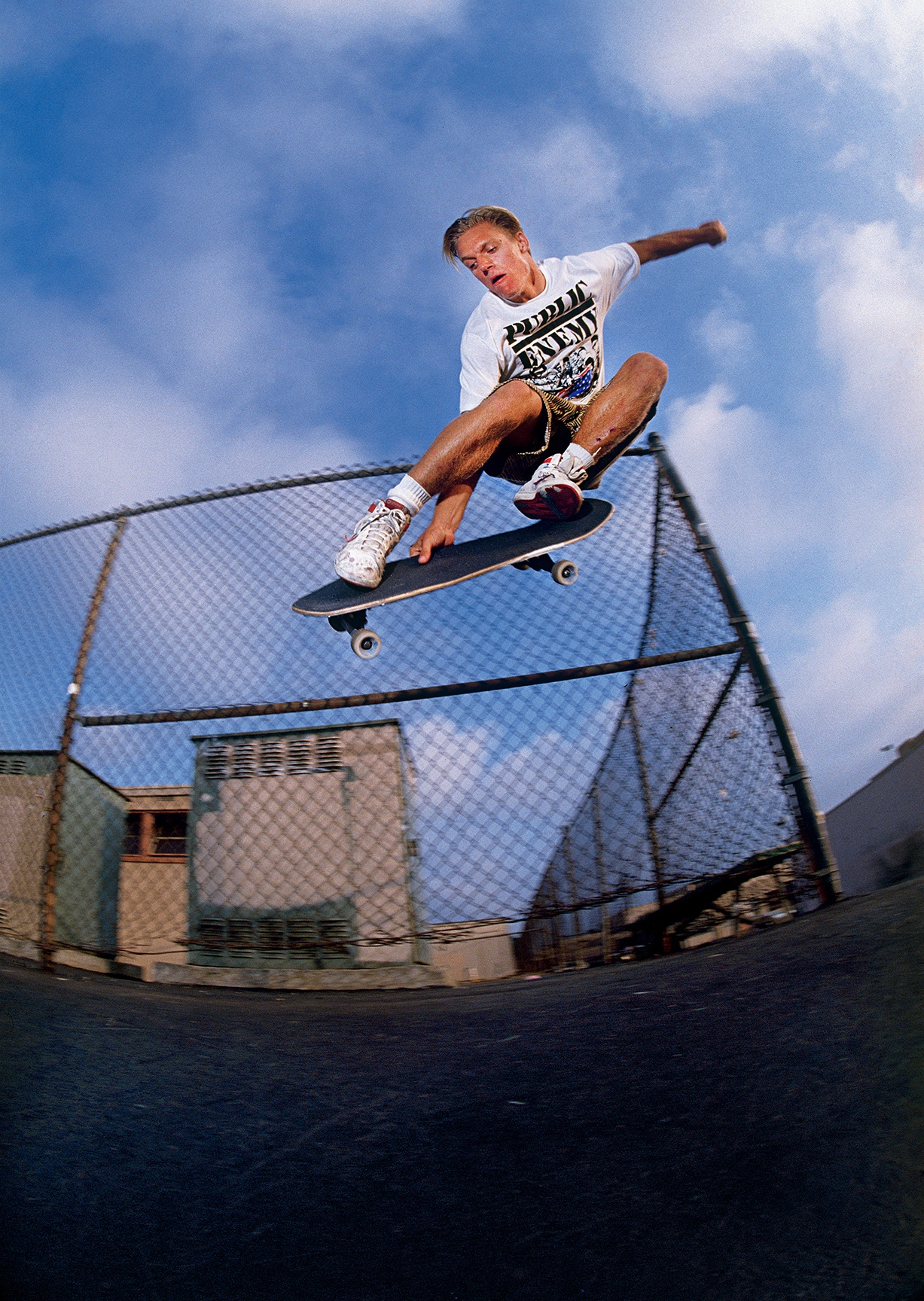 Is skating closer to art than sport?
The way some people approach it, it’s all art. Some people get kinda whacky with it, like it’s performance art, and it can be really personal. Then I’ve seen other people, the way they do it, it looks all sport.

You’ve been skating for over three decades now. What does it mean to you today?
I guess it changes, but on a singular, very personal level, I still love it. I still love the feeling of rolling around. But I guess out in the world it’s up to other people and what they think my connection is to skateboarding. I dunno, it’s funny. It makes me happy.

Linkedin
RELATED ARTICLES
OTHER ARTICLES
A new film from Berghaus traces the story of Adam Raja, who left behind a turbulent upbringing to discover the healing power of climbing.
A new law change is enabling Britain’s donor-conceived children to know the truth about their origins – but campaigners say the fertility industry must do more to protect people.
Since 2007, Gideon Mendel has made 20 trips to document floods in 13 countries. The result is an alarming record of what has already been lost to the climate emergency.
Photographer Sean Maung reflects on documenting a small town in Pennsylvania afflicted by high levels of unemployment, poverty, violence, crime, and addiction.
Following the release of his debut single, Deyaz talks battling addiction, dealing with his struggles through music, and building a budding music career from his living room.
A recent High Court ruling against the right to wild camp in Dartmoor National Park sparked the largest land protest in history – and campaigners say their fight is not over yet.