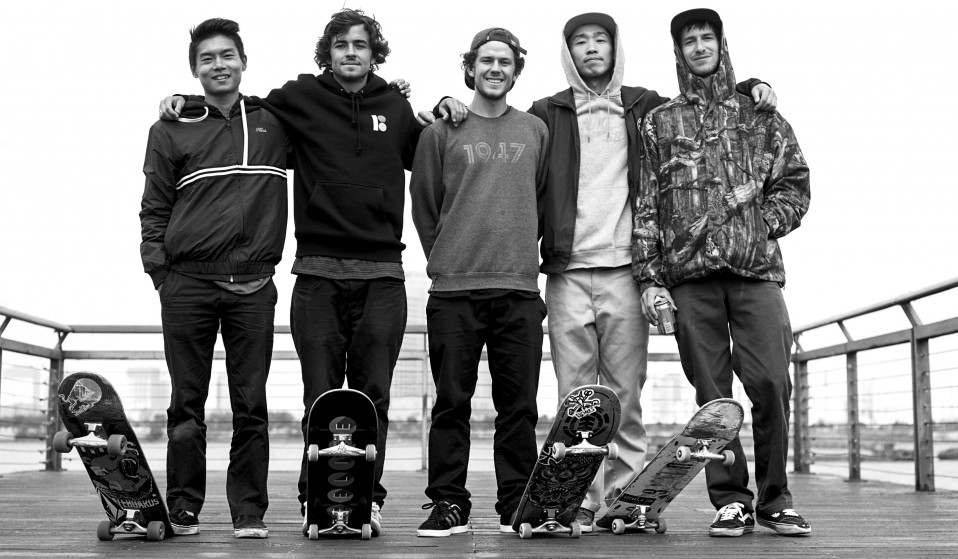 Meet Tommy Zhao and the skate family nurturing an exciting DIY scene in the midst of Shanghai’s retro-futuristic skyscrapers.

Meet Tommy Zhao and the skate family nurturing an exciting DIY scene in the midst of Shanghai’s retro-futuristic skyscrapers.

The first thing that hits you when you arrive at LP, Shanghai’s legendary skate spot, is the lack of government presence. A solitary security guard snoozes in the distance, one eye half open. The architecture is European colonial meets retro-futuristic skyscrapers, imposing but not brutal, the way it is in Beijing. Old folks are exercising, poodles bark. In a few hours up to thirty skaters will descend on this tranquil scene, and will largely be left alone.

What draws them is a tantalisingly smooth slick of concrete. LP, named after Philadelphia’s famous Love Park, has three elongated marble steps, now chipped and scuffed from grinds gone by. There are marble ledges too, and there used to be more but they were grassed over – Shanghai is in a constant state of flux. 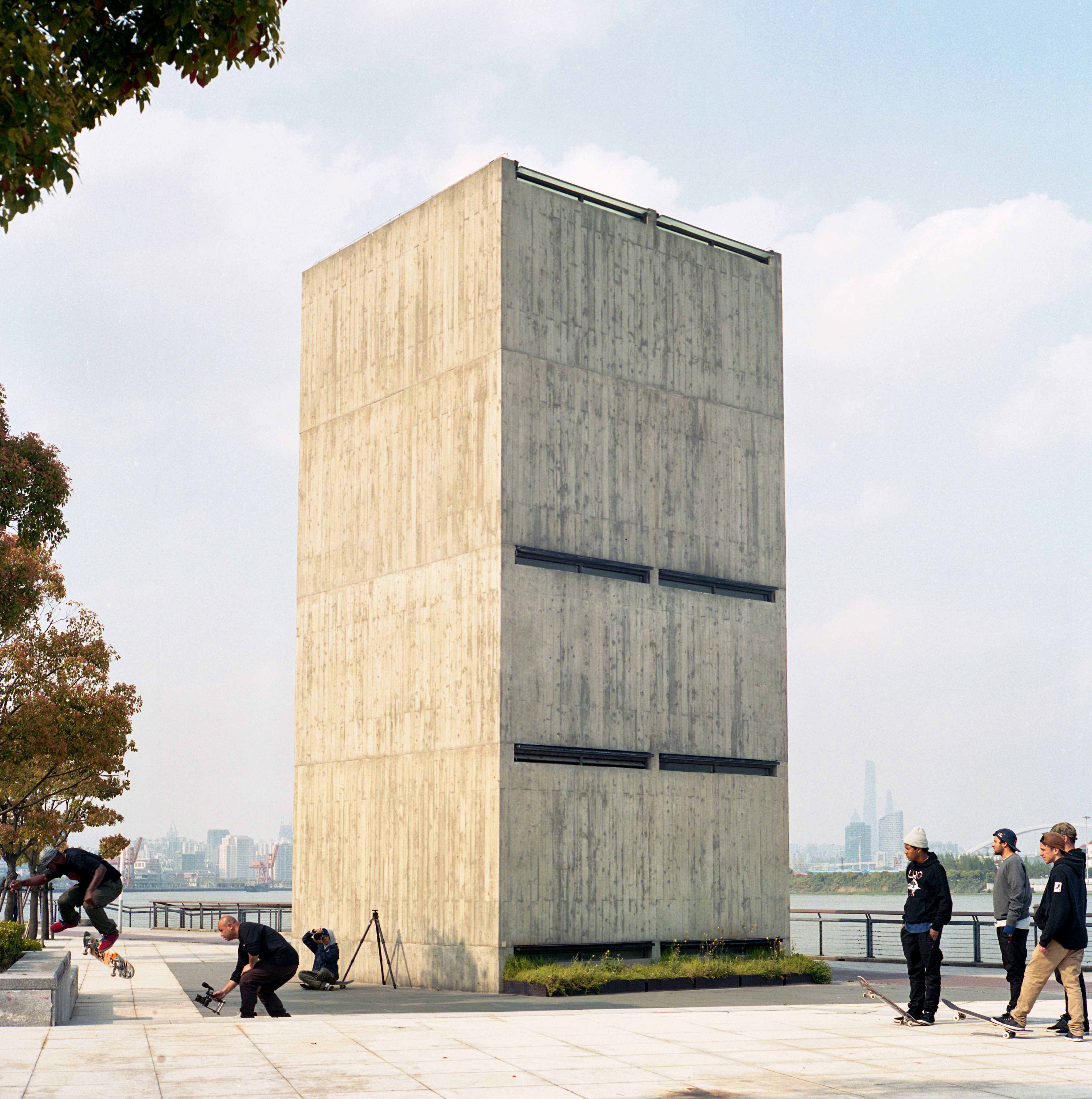 It’s this unique combination of density and space; development and tradition; control and freedom that makes LP, and possibly China, so magnetic to skaters.

“China is probably the most amazing place in the world to skate right now,” says Tommy Zhao, a veteran Shanghai skater and freelance videographer. “You get to be one of the first dudes to skate these places, and everyone wants to leave their mark.”

Born in Japan to Chinese parents but raised in Delaware, US, Zhao moved to China after graduating in 2008 to, in his words “see if there were awesome things to skate”. He succeeded. Today, he’s dressed in a crisp navy sports jackets and black skate shoes. His boyish face belies his real age, twenty-eight, the average of local skaters in Shanghai. 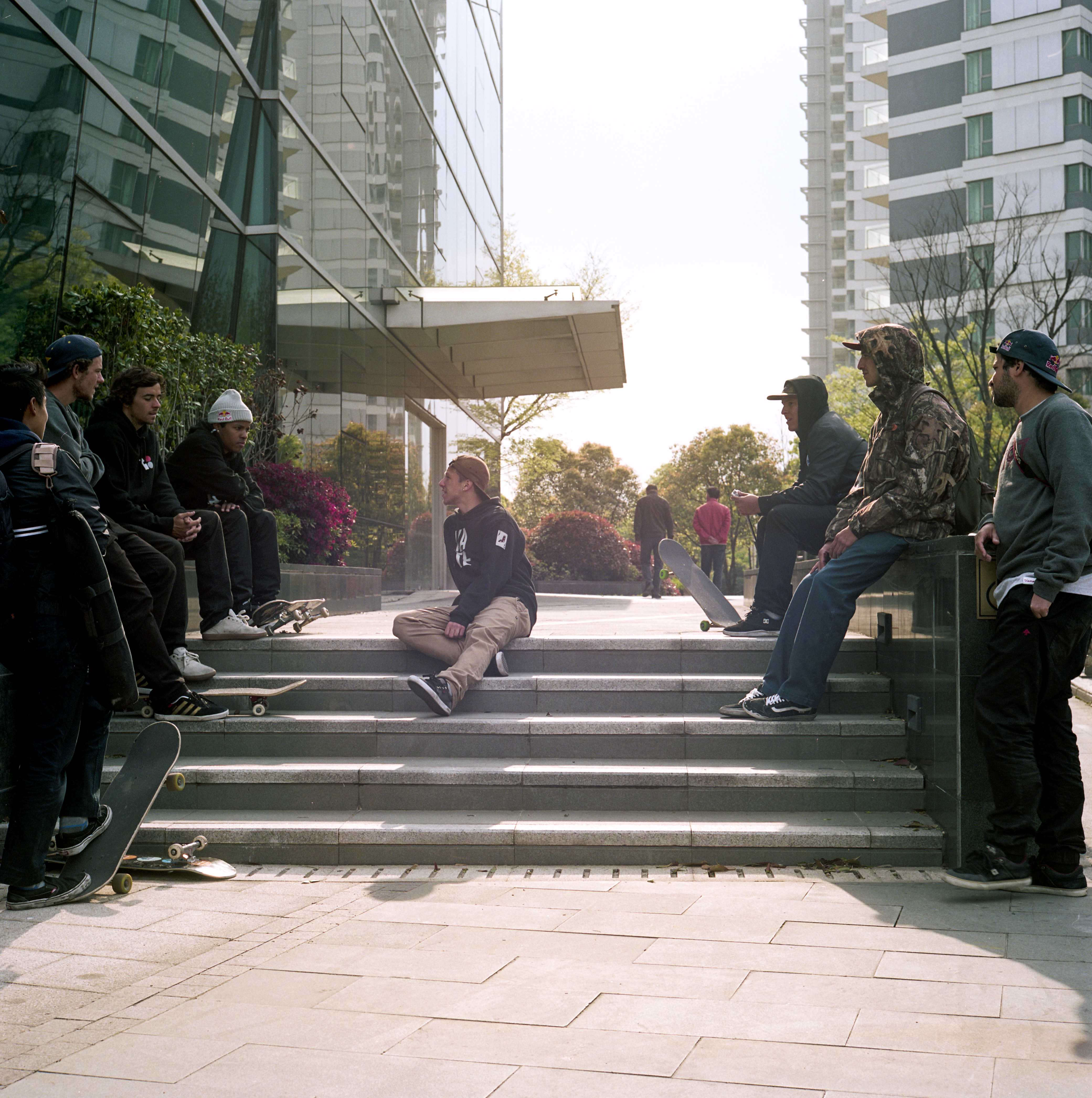 Skateboarding is still young in China, in global terms. According to skate lore it was brought over to Beijing in 1986 by an American skateboarder. Its initial takeoff was blighted by lack of infrastructure and an absence of retailers. Then the free market boom happened, giving all the big brands a stake in the world’s fastest growing consumer market. In 2009 a survey in China Daily reported that the country had around 50,000 skateboarders. Since then the scene has expanded into tier three and four cities and last year China opened the world’s biggest skatepark in Guangzhou – 182,000 square feet of fun.

For Tommy and friends it’s the streets that hold the real appeal though. So what makes the city so good to skate? “Thing are always changing here, changing so fast that there are new skate spots coming up all the time,” he says. “Skating is about going and finding these spots and making your mark. You know ‘Geotagging’ [where you add a location to your social media]? It’s a bit like that. You discover a ledge where someone has done a kick flip to a grind, you add your own mark and document it.” 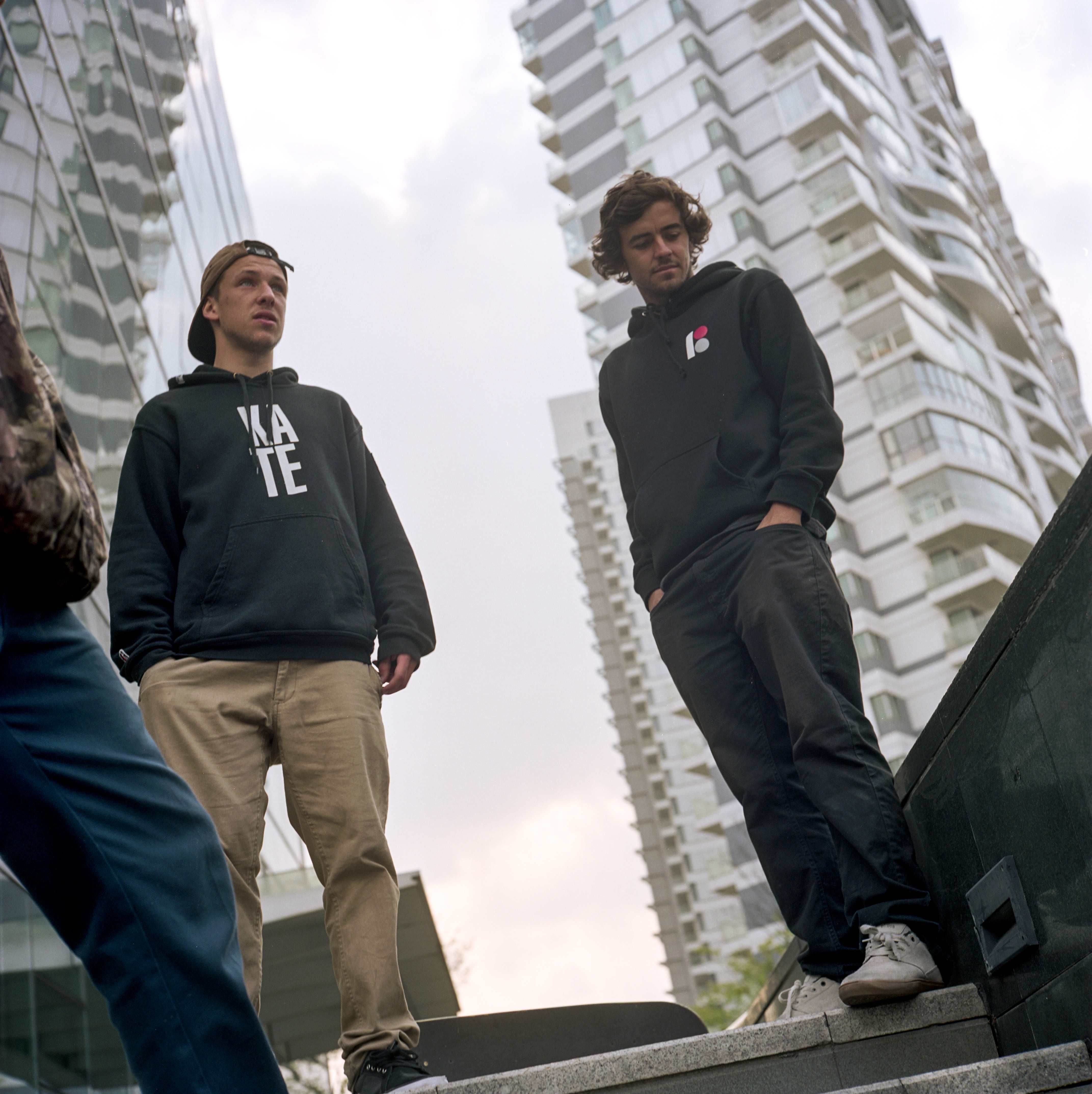 Following Mao Zedong’s Great Leap Forward in the ’50s and ’60s, China was closed to foreigners for almost twenty years. Now the doors are open there is a healthy community of expats diversifying the cultural landscape. But permission to enter does not mean permission to skate. So what do the authorities make of it?

“Sometimes, I feel like we can do whatever the fuck we want and maybe it’s a bad thing – it’s pure freedom in a way,” says Tommy. 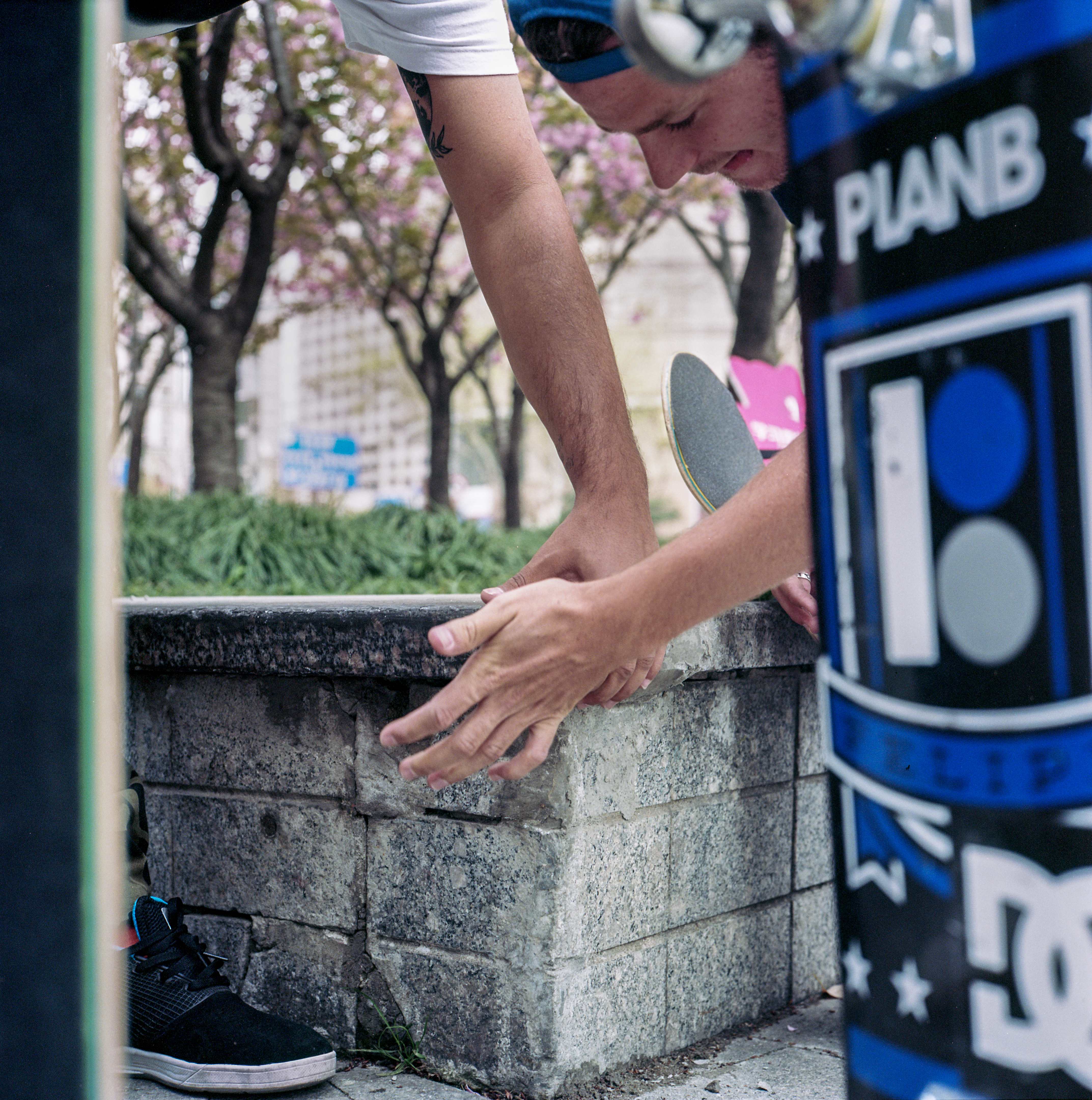 This sounds a little off-message given China’s reputation for iron-fisted authoritarianism.

“It’s become harder and harder back home [in the US]. There’s so much security, people are always kicking you out, yelling at you, giving you tickets,” he continues. “I’ve been arrested for trespassing and it’s stupid. Out here pretty much no one cares. No one gives a shit at all.”

Compared to the US, with its strict patrolling of public space, China feels free. Unlike activism or art even (read Ai Wei Wei), it is not political and for that reason it’s not seen as a threat to the state and generally left alone. 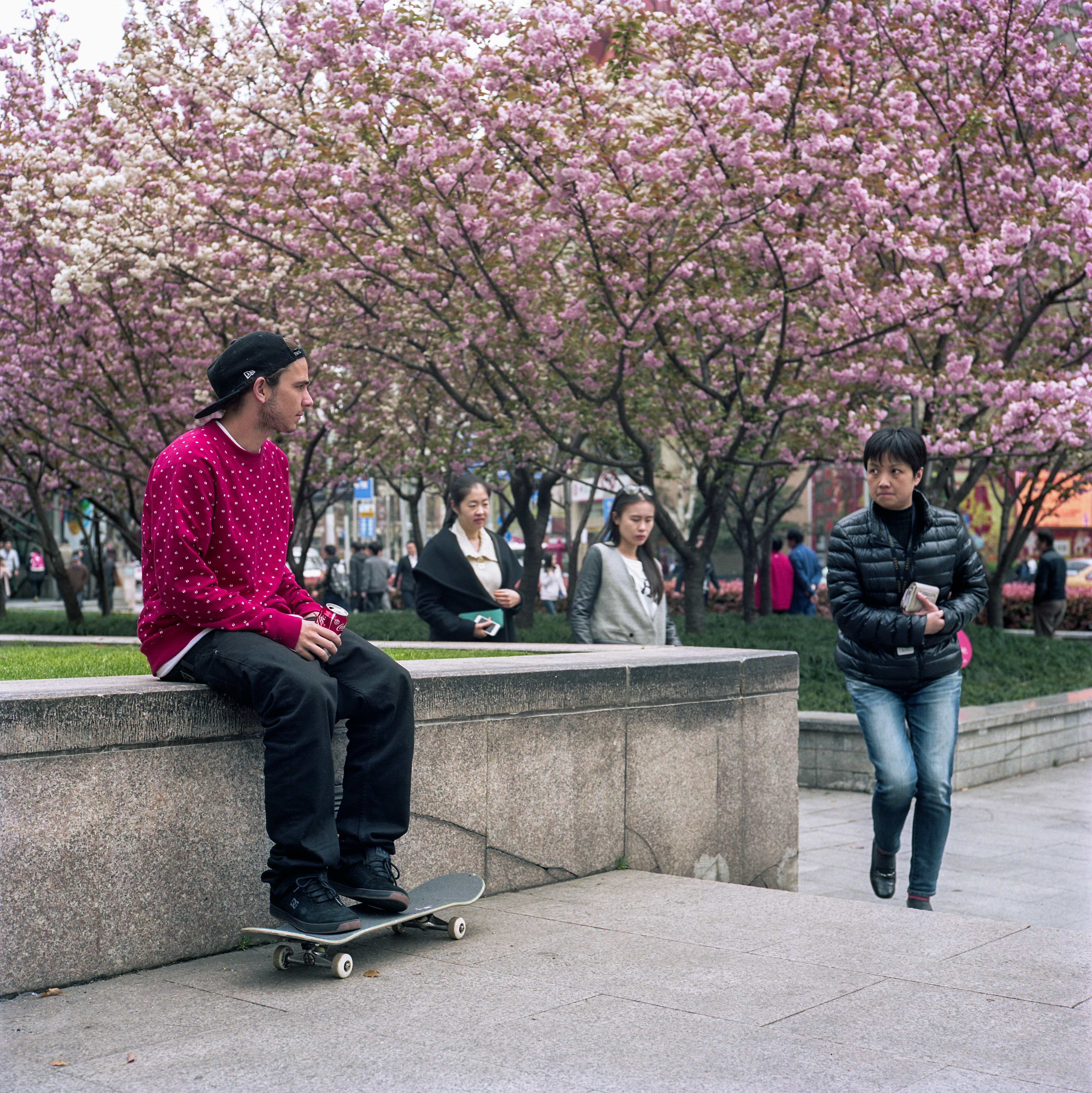 This permissiveness is also the virtue of being the new. People want to understand skateboarding not ban it. For now, the scene is still centered on Shanghai and Beijing and to a lesser extent Shenzhen. Seven years ago, when Tommy arrived, LP would attract a handful of local skaters. Now it can draw as many as fifty, with a 50:50 mix of foreigner to local.

Like all subcultures, the most interesting growth is happening on the fringes. In China’s southeastern Yunnan province there is a developer who doesn’t skate himself but builds malls with quarter pipes. And skaters have been exploring ‘ghost towns’, huge conurbations built faster than they can be populated. Google ‘skate Ordos’ and you can watch skaters take over an empty city in Inner Mongolia, originally built for a million people. These skaters are subversive but those with aspirations of going pro must enter competitions, and that means playing by the government’s rules.

The Kia X-Games is a case in point. Back in 2011, Chinese participants were banned from the podium after refusing to wear the T-shirt supplied by a state-backed sponsor. In general, there are fewer independent competitions altogether; Nike China’s City Jam and Vans’ Baby Dragon have stopped in recent years. This fits into a broader narrative about the relationship between state and sport in China. Here, state-backed athletes have to pay as much as two-thirds of their sponsorship money to the government. For now though, this is not hitting skaters. 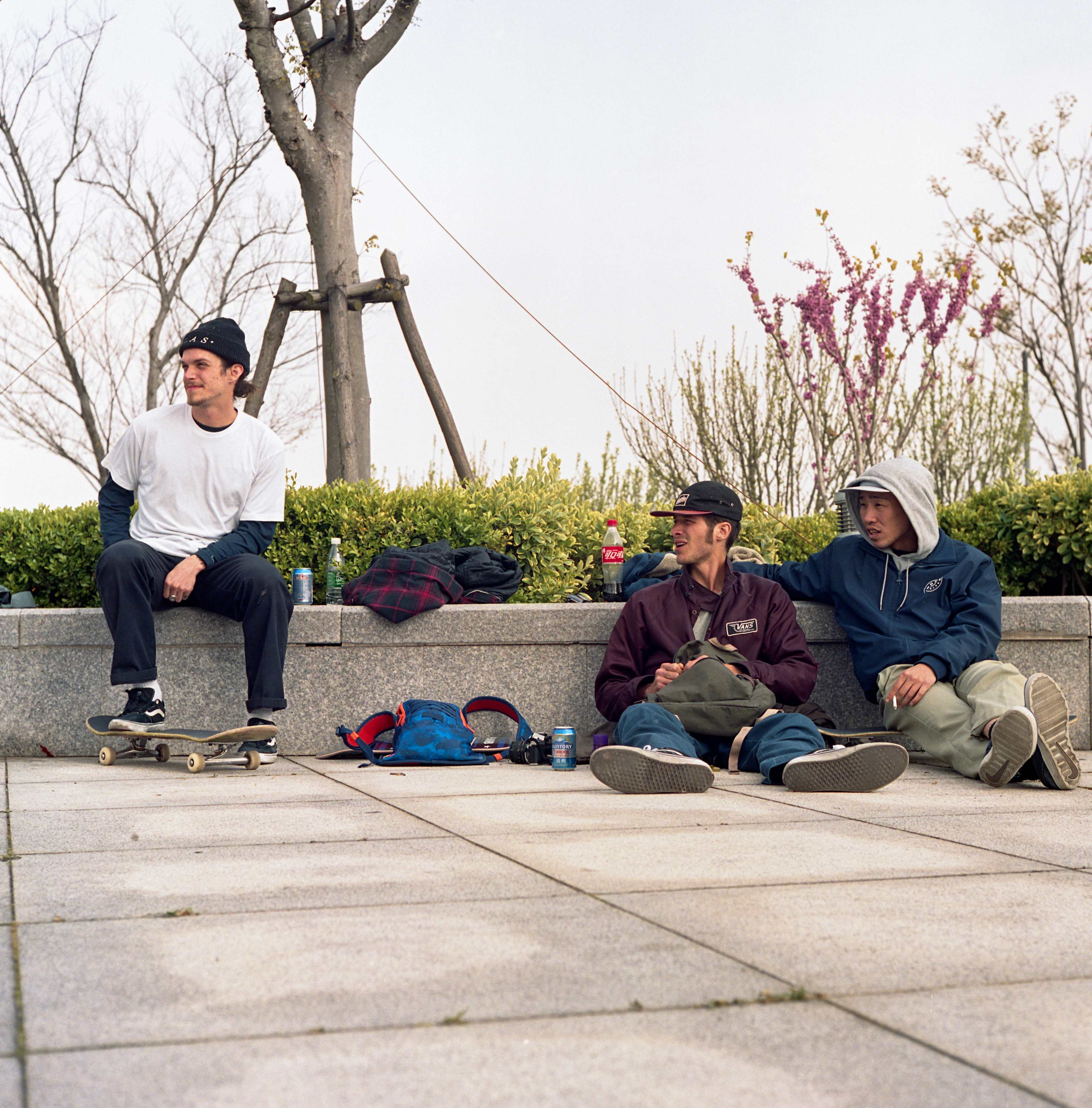 So over the last thirty years has China developed an authentic skate scene – in its own image? No, according to Tommy, “that will take a couple more generations”. It is, however, different from its Californian brother.

For one, all the skaters I meet are aged between twenty-five and thirty-five, and tend to start skating later in life, from eighteen, versus the eight-year-old prodigy kids in the US.

And when it comes to tricks, they tend to be less outlandish – no huge stair jumps. Tommy suggests this might have something to do with Chinese family culture. 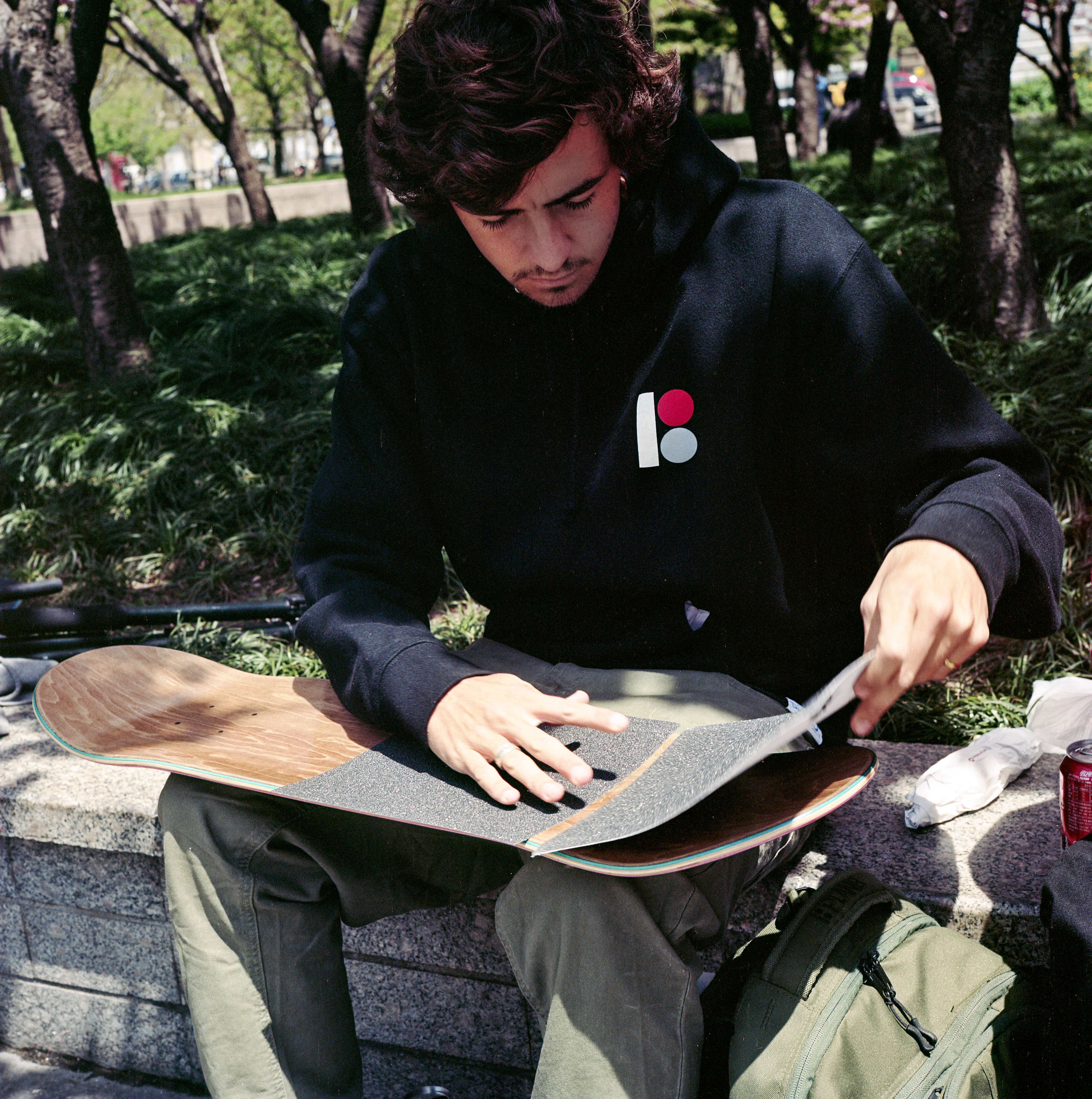 “I grew up with Chinese parents and they are always kind of trying to baby you like, ‘No no what are you doing, you’re going to get hurt, don’t walk on the ledge,’ and that will maybe affect you growing up to the point where you are a little bit scared of getting hurt. In the US, people are less hesitant.” But things are changing in China.

So what will the next generation of Chinese skateboarding look like? More homegrown brands, younger skaters, ballsier jumps and pollutions masks, all played out on a retro-futuristic landscape? And surely it must involve technology? Last year China overtook Japan and Korea to become the centre of robotics innovation in Asia. But for now one of the most striking observations of the blossoming culture is how the one-child policy has strengthened fraternal bonds. Skateboarders in China are the closest of crews. “What is really cool and really different here is that skaters really are like family,” says Tommy. “These kids are mostly only children. Back home we all have brothers and sisters, but here it’s way tighter because all the skateboarders grew up together.”

Linkedin
RELATED ARTICLES
OTHER ARTICLES
Photojournalist Fiora Garenzi spoke with people still living in Eastern Ukraine, an area which seen some of the heaviest fighting since the war began.
The author discusses her new memoir, which offers a sobering reflection on the racism and otherness she’s experienced along with a joyful celebration of her culinary heritage.
Students are being left to languish in unsafe housing, in some cases leading to serious health complications.
With the UK now set to run out of vaccines, people working in the sex industry – particularly outside of major cities – have been left especially vulnerable, reports Brit Dawson.
In the latest instalment of Photographers in Conversation, the creator talks portraiture, platforms and taking inspiration from Little Simz.
The government’s brutal crackdown on NGOs has left victims of rape without anywhere to seek help. And now, as the country plays a key role is Russia’s war, things are only getting worse.