Stockwell is a skatepark unlike any other. It’s a graffiti-laden canvas in the heart of Brixton that’s been home to a buzzing community of skaters, musicians and eccentric characters since 1978. It may be known by many different names – Brixton Beach, Stocky, Stockers, Stockwell Sands, Brixton Bowls, The Well, The Beach, The Office and The Park – but it is loved by all.

Stockwell is an example of how a skatepark can become part of the fabric of a community and a lot can be learnt from its vibrant history. It started life as a sandy-coloured sugar bowl, big bowl and snake run and then in ’95, the park was painted red by Matt McMullan (RIP) and Gnarly Tom and the sausage ramp and mound with stairs were installed. This era was fondly remembered by locals as a time when they built shaky ledges, quarterpipes and banks to skate.

But this all changed in 2007 when Jeremy Donaldson, a local ripper and architect, spearheaded a major redesign. A new bowl section, ledge, Jersey Barrier and some quarterpipes were added, but the updates fitted the locals needs perfectly. “It’s a unique spot,” says longtime local Andy Lindsay. “It’s an old school park with a new upgrade that fits seamlessly into the overall design and it offers something to all abilities. Due to its layout the place can accommodate a large amount of people skating at one time.”

Stockwell locals have a unique approach to skating the park. Its not about landing the biggest tricks but riding fast and landing tricks with style whilst still maintaining flow. “It’s a constant motion park,” says Adrian French, founder of Witchcraft Skateboards. And Descent Skateboards owner, Chris Pulman agrees: “I remember it being kind of endless.”

Stockwell was funded by Lambeth Council and it’s maintenance is still presided over by the local housing authority. Relations between the skatepark community and the local council have not always been brilliant but persistent lobbying by the skaters, through groups such as the Friends of Stockwell Skatepark has bettered the situation. The skatepark continues to be cleaned and maintained to a good standard. Although some locals comment that the upkeep of the park could be better, they have integrated its faults into their skating and can still flow effortlessly around it. Pulman says: “It’s different to the new ‘regular’ style parks because it isn’t perfect. There are cracks, the surface varies in quality, the block is kind of gnarly sounding, there’s graffiti. It just seems a little less sterile than most modern parks.”

Stockwell’s historical origins are steeped in mystery and urban legend. Some people say the big bowl was forged from the crater of a WWII bomb blast and some say it was part of the cellar of a grand manor house that once occupied the space. One true spooky fact is that Stockwell is built on a graveyard and that some of the bodies still remain there. But skaters fear rain more than death. According to Stockwell local Daphne Greca: “The concrete is dead and immortal, and we are alive and mortal. We connect to the concrete. We are the live part of this dead material and together we are almost like an organism. It’s refreshing to know that in a place built upon the graves of the ancient dead that such a great amount of life and positive energy flourishes.” 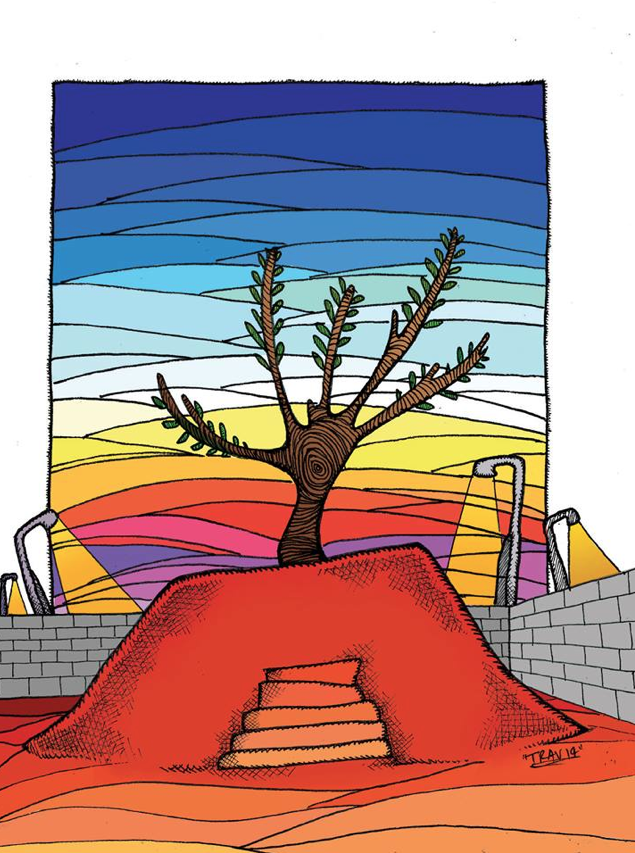 There’s something musical in the air at Stockwell. Perhaps as it’s located a few pushes down the road from the Brixton Academy or maybe because somebody’s always on the park platform bumping good tunes from a ghetto blaster. “Music is very big part of the culture,” says Stockwell local and music producer Dave Reading. “There are also a lot of riders and skaters who make music or play instruments. Any excuse and we get a sound system pumping and a BBQ crackling!” Stockwell jams are well known for making banging music and creating good vibes. Matt Gold, a Stockwell local and DJ says: “One of my favourite memories is making windows rattle in the flats across the road playing some dubs at one of the jams.” It was at a Stockwell skate jam that a young Roots Manuva first heard proper bass music and was inspired to make it himself.

“People used to kill themselves at jams!” says local am Chris Ault. “I won my first board there, a Krooked Hosoi hammerhead. Fos [Heroin Skateboards] offered me five boards for it and [Nick] Zorlac from Death Skateboards said, ‘Don’t do it!’ It’s been on my wall ever since.”

It’s a very intergenerational skate community down at Stockwell. Kids as young as five skate alongside older rippers like local ‘Peter’, who’s 68 years old. This wide inclusion of people brings a diversity to the skating at the park. There are old-school Dogtown influenced dudes next to new-school skate technicians like Josh Jennings who lay down next-level bangers. The older skaters teach younger skaters tricks, etiquette and history and they get to see the new breed of Stockwell skaters do tricks they didn’t think possible years ago.

This relationship goes beyond skateboarding. Stockwell has an atmosphere unaffected by regular social conventions. It’s a space where you can air opinions without restrictions and borrow, lend and seek advice from other people in an organic and uncontrived way. “The magic of Stockwell is that pretty much anyone is welcomed on an equal footing as long as they don’t act like arseholes,” says Matt Gold. To add to this there is a cohesive and harmonious relationship between skaters and BMXers that doesn’t usually exist elsewhere. The space is big enough to offer space for all and this is evident in the fact that some locals ride bikes and skate too. Brixton Cycles is right next to the park and it plays a major role in supporting the park as it sells skateboards and bikes.

These days, mainly due to Stockwell’s main roadside location and constant activity, the park attracts an assortment of characters. Some of whom become legends. A local lady named Maria visits the park regularly and can usually be found swimming half-naked in the bowl when it floods. Years ago, a homeless guy dubbed ‘Tony the Pirate’, because of his bandana and reckless ways, became synonymous with the park. He slept in a storage container next to the park, kept a pet rat and also built bikes. He eventually got really into BMX and started ripping there. “[Stockwell] has its own folklore,” says Alex Irvine, ex editor of Kingpin magazine. “It’s like a dress-up box of personalities down there. You never know who’s going to roll up, what section of society they come from, how ‘involved’ in skateboarding they are; people you’ve never seen before and people you’ll never see again. Randomness.”

Eccentrics like Maria and Tony are some of the first people you may see at Stockwell and it’s great the park caters for them. Stockwell gives them a sense of support and community they can’t find elsewhere. Now, although Stockwell’s community don’t really care about anyone skating better than anyone else there are some locals who’ve gone the extra mile to make the park what it is. The aforementioned Matt Gold, who first went to Stockwell in 84′ on a BMX and “still has the scars to prove it” remembers rippers throughout the years such as Rob Dukes, Ged Wells, Shane O Brian, Lucian Hendricks, Will Bankhead, Mike Manzoori, Reuben Goodyear, Robbie ‘Deaf Aid’ Newell, Matt McMullen, and Mark ‘Fos’ Foster.

Fos, the man behind Heroin Skateboards, is a prominent Stockwell local whose video documentation of the park had a major impact on its prominence in international skate media. Stockwell’s been featured in basically every Heroin video. “Fos and I used to have this FS Boardslide shove it challenge on the old flatbar there,” says Chris Pulman. “Whoever landed it last had to buy the tea and cakes from the Portuguese cake shop where I first discovered pastel de nata (Portuguese custard tarts). I think most of the planning behind [Heroin] originated between the park and the cafe.” Fos since moved to LA to further all things Heroin and steer the creative direction of Andrew Reynolds’ artistic skate brand Altamont. But local skate crew BMT (Big Man Ting) are carrying on the creative spirit, making videos, art and clothing.

The history of Stockwell is quite literally etched into its surface. Every skater who’s done a trick over the park wall (onto the road) has etched their name onto a very short list. Bam, Hawk and Huf are all on there. “Going over the wall does have that edge. When guys start flying over the wall into the road they’re narrowly avoiding oncoming traffic,” says Dave Reading. It may be sketchy but the wall has a legacy all its own. “I saw Jimmy Boyce do a kickflip front rock on the wall and I saw Mike Manzoori doing massive canon balls over the sausage,” says artist French. “I used to really love skating the wall out of the main bowl. And doing nosepicks inspired by Will Bankhead. I wanted to pay homage to him so we filmed a stalefish one for the Heroin video Everything’s Going To Be Alright. Pivots and Smith stalls and even a backside feeble stall,” says Pulman.

Stockwell is best described by those who’ve loved it, lived it and will never leave it. “Stockwell means a lot to me,” says Dave Reading. “It means family, friends and good times! I have lot of nostalgic feelings towards the summers we had, skating all day and partying all night! It also kept me out of trouble I think and the same can be said for a lot of youngsters there now. They have a way to channel their energy into something positive.”

The future of Stockwell is bright and as its colourful past suggests it will nurture a new generation and grow even bigger. New obstacles will be added, more eccentrics will make it their home and new lines will be skated. Stockwell has served the skate community for nearly five decades and should be protected like its sister park, Romford Skatepark, which was recently given Grade 2 listed status by English Heritage. Stockwell may be built on the graves of the dead but the space is more alive than ever.