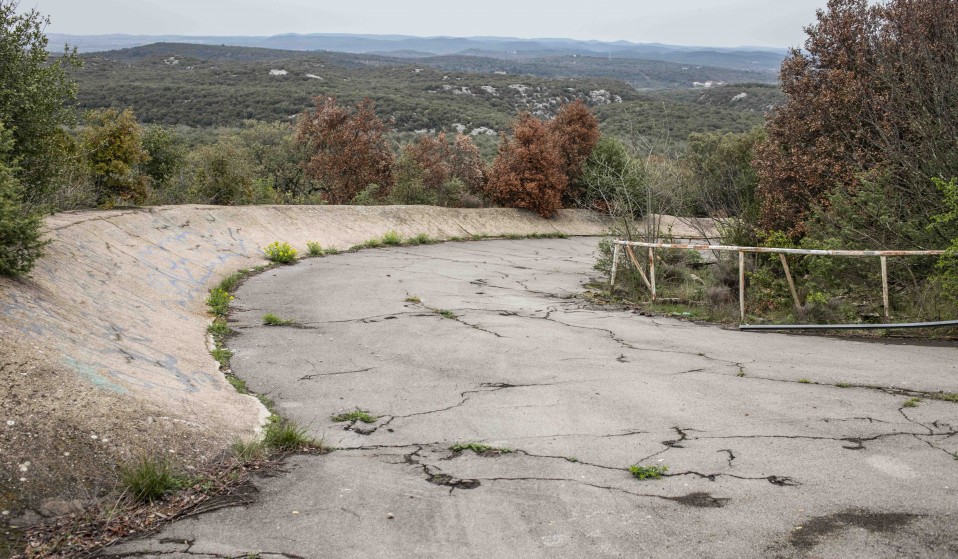 25 years ago, a retired winemaker built a 3000-square-metre skate park, complete with fully functioning ski lift. It closed within months – making it the skate world’s first ever ‘ghost town.’

25 years ago, an eccentric retired winemaker built a 3000-square-metre skate park, complete with fully functioning ski lift. It closed within months – making it the skate world’s first ever ‘ghost town.’

Driving the 20km stretch from Saint-Hippolyte-du-Fort to Anduze, you wouldn’t guess the surrounding garigue – a dry shrubland typical to the south of France – was once home to the country’s most unique skateboarding spot.

Back in the ’90s, Gabriel Leuret bought one of these hills to build his own skate utopia. Known as ‘Rooler Gab’, it was an installation he hoped would captivate the street skating kids he saw in the nearby cities of Nîmes and Montpellier. Unfortunately, his vision was short-lived – and after a few months, Leuret had to close the Rooler Gab down for good.

Lauret’s idea to build the spot first came to him in 1988. After retiring from winemaking, the 60-year-old found himself with plenty of money and time on his hands – but he didn’t feel like spending his days gardening, or wandering around his house near the Mediterranean Sea. “I was still quite young at the time, I didn’t want to stay idle,” he told French artist Raphaël Zarka in 2003. “I had to start something new.”

Lauret eventually came up with the idea for Rooler Gab during a ski-trip with his wife: he would build a large downhill slope for skateboards, served by a ski lift. It would be a worldwide first, and the kids – he was sure – would love it. 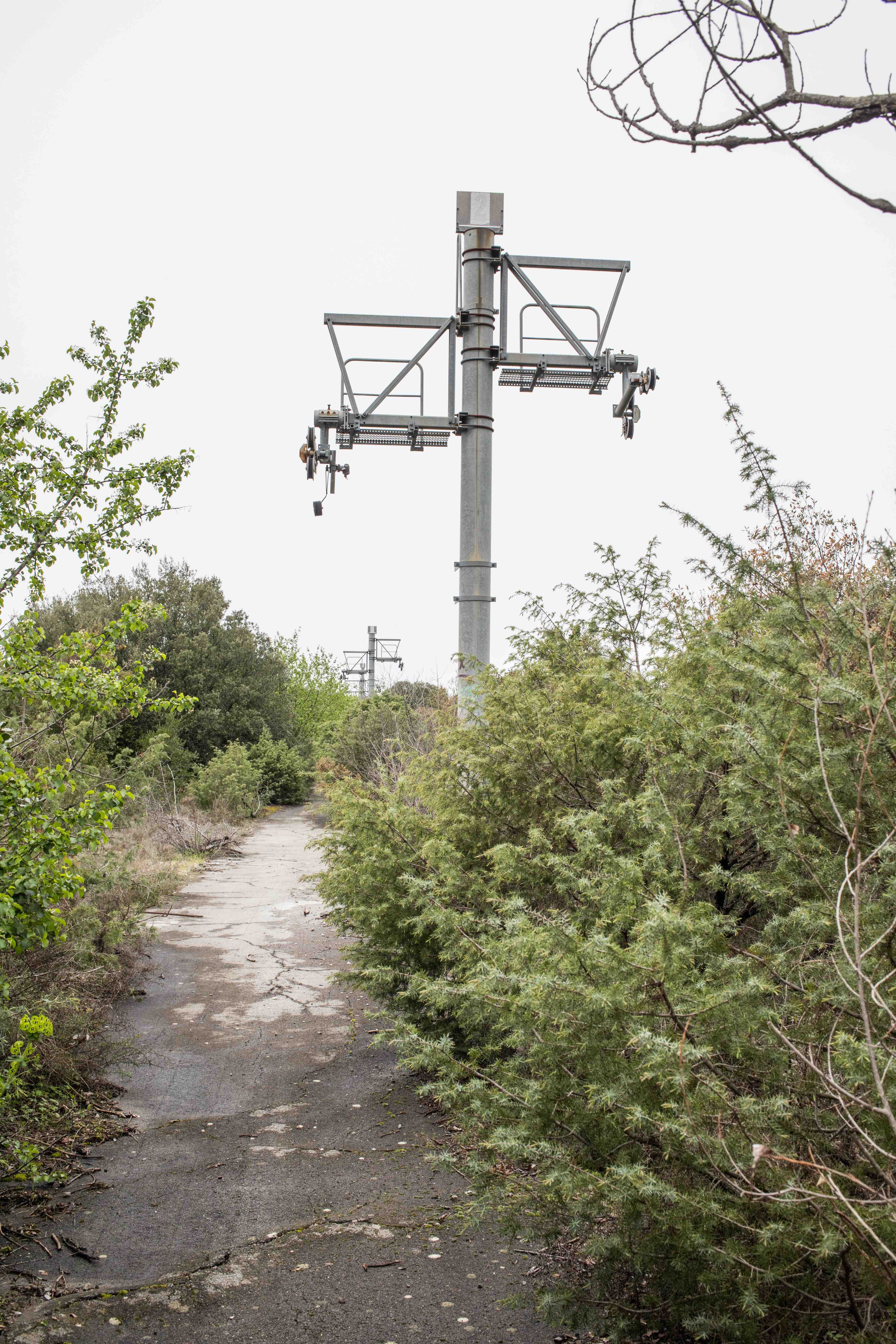 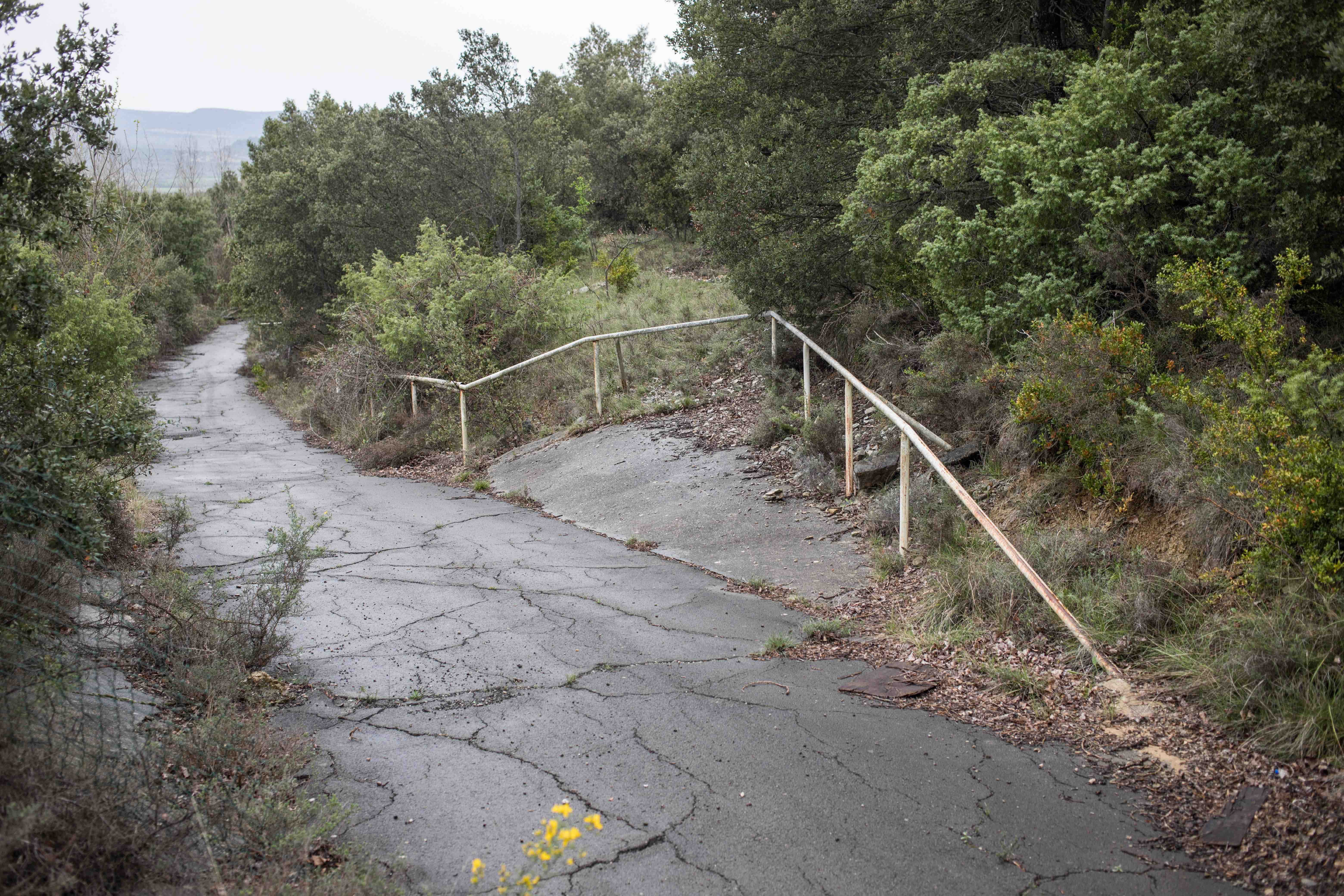 It took Leuret four years to make this dream come true. Within a year, he found the right hill, then bought a brand new ski lift. Although there were some hiccups along the way – Leuret got in touch with every department of the French government, even the Army, as no one knew what kind of permit he needed to operate a ski lift in a snowless area – the Rooler Gab’s grand opening was finally announced in September 1992.

The slope was 1.2 km long with ten banked turns, leading to a 3000-square-metre flat space equipped with a mini-spine and a small table. There were also plans to build a bigger ramp, along with a bungalow camp and some other spines. Leuret also hoped to open a second slope, which would be used with non-motorised go-karts.

Such a strange project didn’t go unnoticed of course, and a TV crew came all the way from Paris to cover the opening. On the set of the then-popular French programme Nulle Part Ailleurs (“Nowhere Else”), Leuret explained his concept to a dubious TV host. There was a mocking undertone to the interview: what kind of entrepreneur would invest in such a project without prior knowledge of skateboarding or running a ski resort? Was his love of skiing enough to undertake such a venture?

Property investor and skate enthusiast Frédéric Vincent, who recently planned to revive the space and turn it into a bike park, recalls these times. “I went there on the opening day,” he tells me over the phone. “It was packed in the beginning, and it was very sweet.”

But the dream was short-lived: by the end of summer 1993, Rooler Gab closed after it failed to make any money.  Since then, Leuret has been trying to sell the area – but at 600,000 euros, it looks unlikely that the entrepreneur, who is now almost 90, will find a buyer.

Vincent remembers a phone call with another man who was interested in bringing Rooler Gab back to life. “He wanted to open an eco-village,” he says. “He called me because he didn’t need the whole 70 hectares. The first thing he told me was that he wanted to destroy the slope. I told him there was no use in talking with me in that case! With biking, the potential is huge. There’s already a market for this kind of practice.” 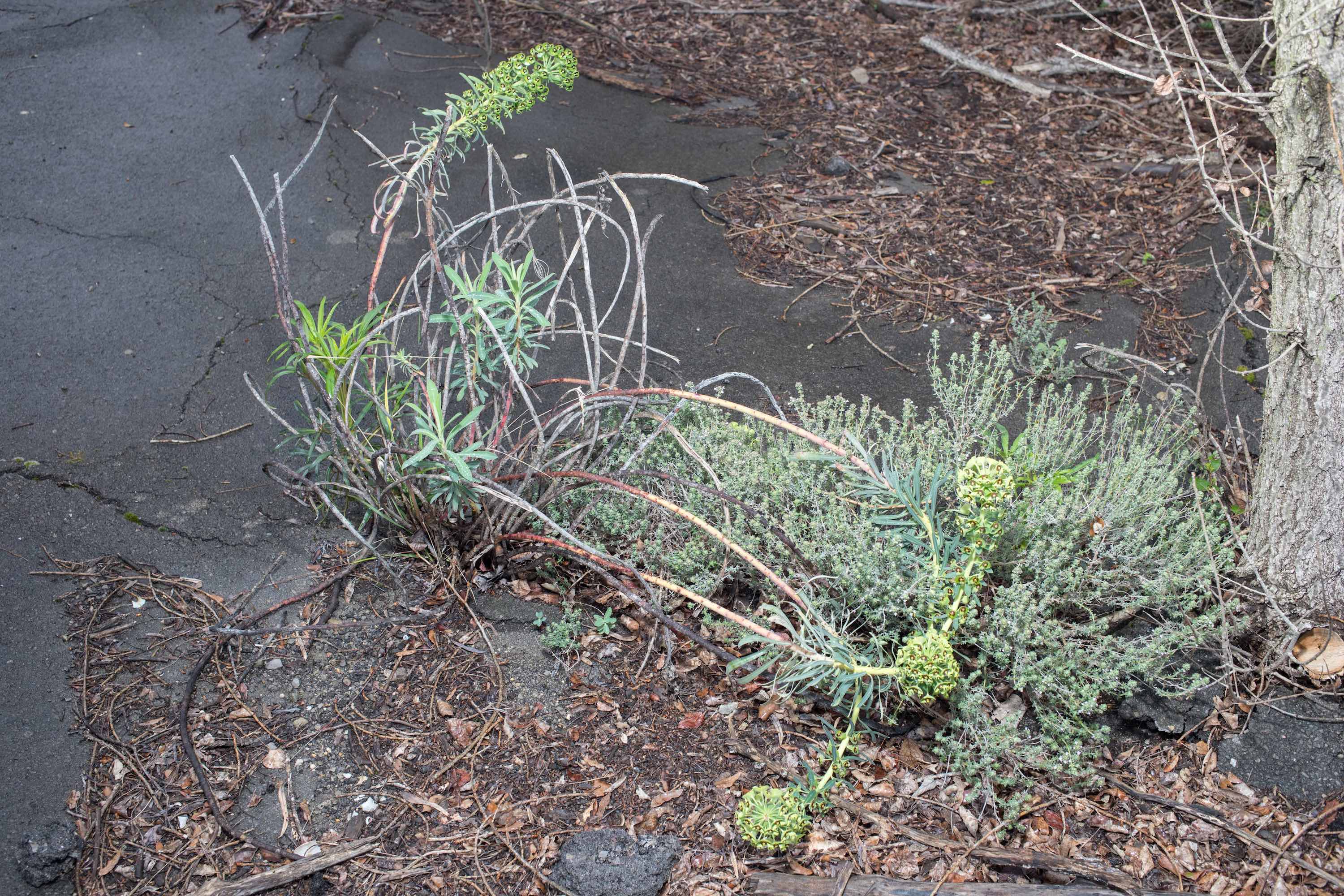 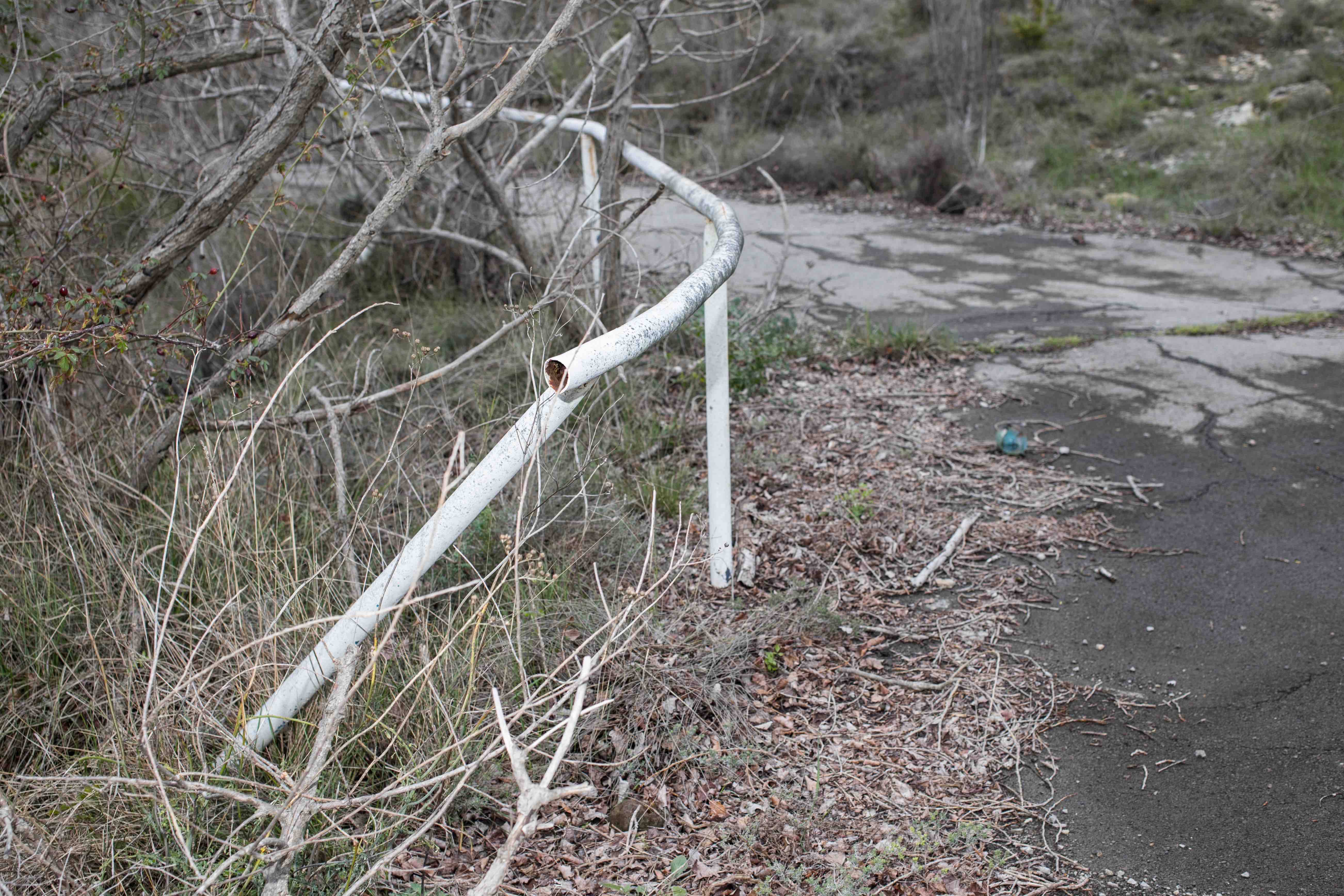 At the moment, neither the bike park nor the eco-village look likely to happen. Rooler Gab has been closed for 25 years – grass grows from cracks in the slope, and tyres and beer cans litter the ground. The ski lift’s poles are still there, but the cables are missing.

Although the very idea of the Rooler Gab commands some sort of respect – if only for the sheer drive Gabriel Leuret needed to make it come true – the whole project is a testimony of how little Leuret knew (and cared) about skateboarding. He had no consideration for what skateboarders were looking for, and he didn’t understand what drove kids to the sport. Looking back now, the Rooler Gab was as anti-skateboard as could be: you had to pay for it, and adults had to bring you there.

“Everybody thought he was crazy at the time, and they were right,” says Vincent. “But to me, he was a crazy genius. A ski lift in this kind of scenery… It had never been done before and no one will ever do it again. The idea was good, but it did not fit any business reality.”

That’s precisely what’s touching with the Rooler Gab – Leuret didn’t necessarily see it as a hugely profitable business opportunity. He needed a passion project, and was happy to create something innovative and inspiring.

Nine years ago, filmmaker Raphaël Zarka, whose artistic practice is closely linked to skateboarding, shot a beautiful video on the ruins of the Rooler Gab. From time to time, the location pops up on geocaching sites or on longboard and downhill-enthusiast forums. Each time, people fantasise about what the installation could have been: they talk about spending the day there, making it work again, sharing a good session with friends – a utopian ideal which was probably exactly what Leuret had in mind.

Linkedin
RELATED ARTICLES
OTHER ARTICLES
Whether it's partygate, the climate crisis or the spiralling cost of living, the fightback begins on the picket lines writes Tommy Vickerstaff
A new report has found that the majority of Britains approach trans issues with compassion. It’s about time this was reflected by our media landscape.
Photographer Arthur Grace recalls travelling through the Soviet Bloc and finding ways to evade the surveillance of his work.
With inflation now at a 40-year-high of 9 per cent, demonstrations organised by TUC took place to demand action from the government.
50 years since its inception, and the campaign calling for recognition that capitalism depends on domestic labour is as pertinent as ever.
The singer-songwriter discusses her intimate new project – and the advice she’s picked up across a career as one of rock’s leading voices.