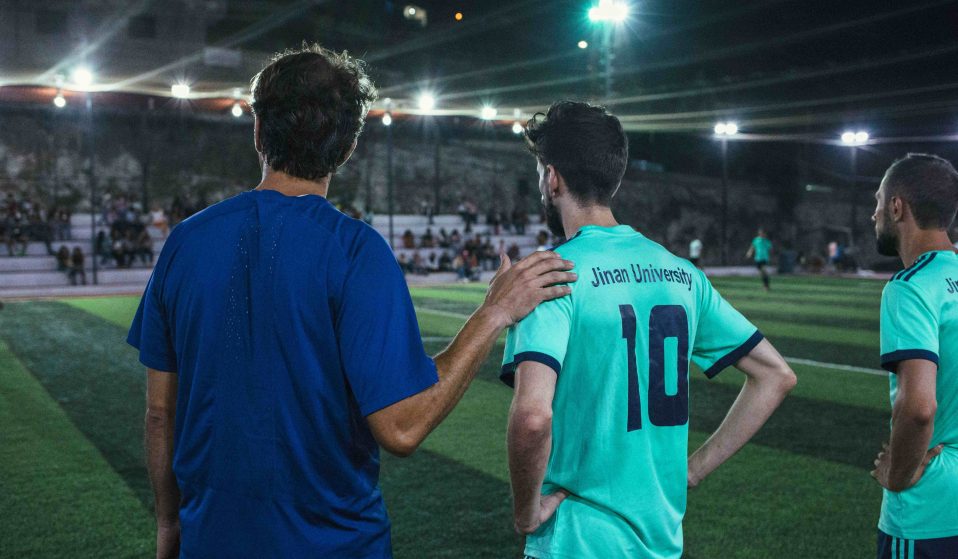 In Lebanon, a small local football team is healing the rifts of a fractured community – uniting expats, outcasts and refugees from across the Middle East.

In Lebanon, a small local football team is healing the rifts of a fractured community – uniting expats, outcasts and refugees from across the Middle East.

Nour Melli sits anxiously in his chair in a large coffee lounge in Tripoli, Lebanon. One leg is still, the other is bobbing up and down as he discusses the football match ahead. It’s a big game that could see his team enter the semi-finals of the local league, and push them into wider recognition.

Nour plays for Jinan University’s football team. As he sits, he gestures towards his team-mates who are sitting beside him in varying degrees of nervousness as he runs through the plan for tonight’s game.

It’s a diverse group. Nour himself is from Hama, Syria, while the rest of the team are Palestinian, Syrian, Iraqi, and Alawite and Sunni Lebanese Muslims. Although not all of them are refugees, they refuse to categorise themselves or view each other differently. 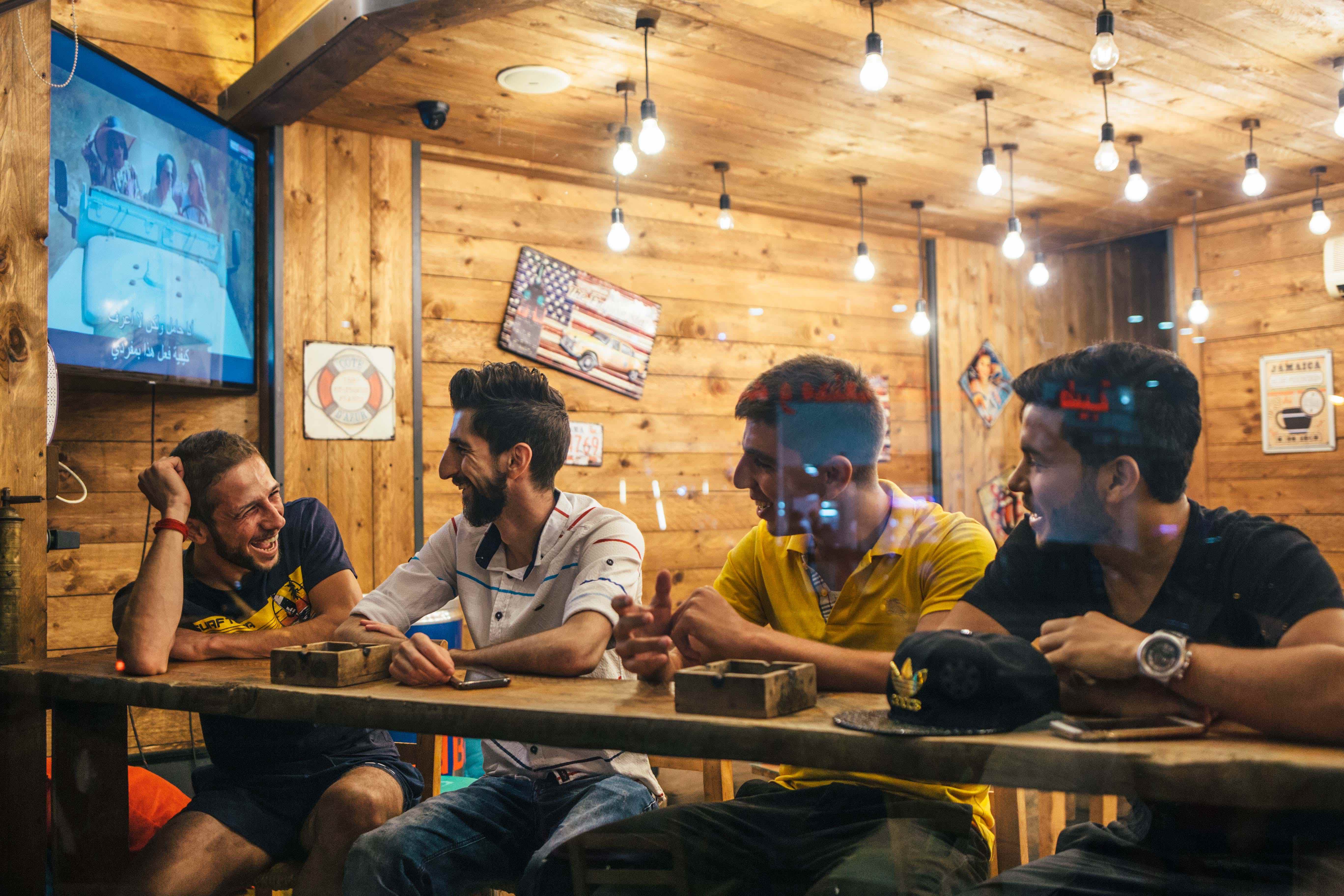 The team relax after practice at a coffee shop in Abou Samra, Tripoli. 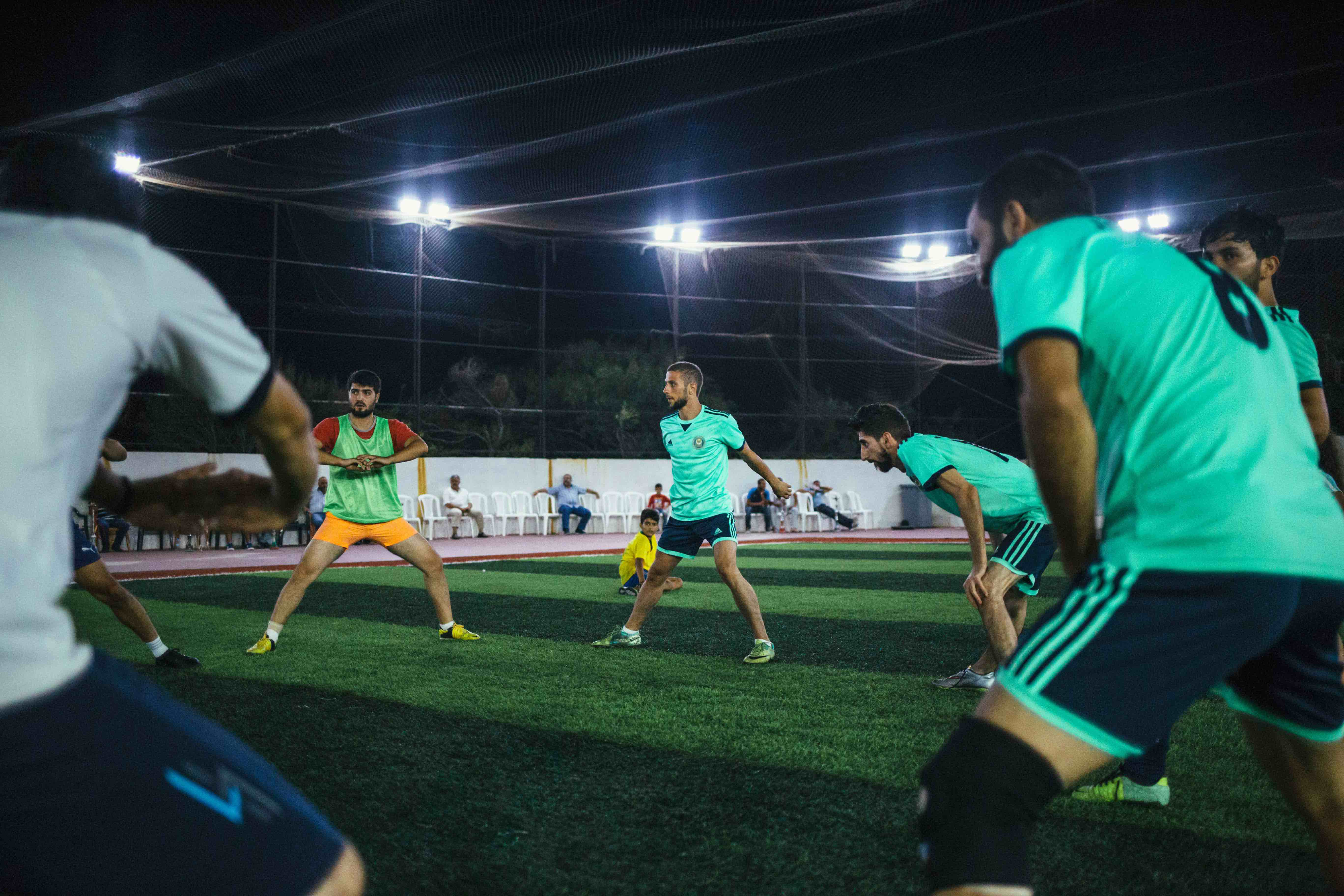 Jinan University warm up before their game which will decide whether or not they make it to the semi-finals in the local football league.

“It’s just a matter of having a card from the UN,” shrugs off Mohammad, a Syrian member of the team. For him, ‘home’ is a complicated concept. “Syrians here all have issues going back because of one reason or another to do with the war. Either way, we cannot return safely… If we return, we run the risk of conscription to the Syrian army. If we don’t conscript, we must pay a fee of $8,000 for not completing military service.”

It’s a large sum, but also one Mohammad seems willing to pay given the potentially deadly consequences of joining. For this reason, many of the Syrians who enlisted as students before the country’s civil war extended their studies for as long as possible in the hope that it would be over by the time they graduated.

Unfortunately, this has also meant enduring a painful separation from the family members who they have left behind. Football, for many of them, is an escape.

Jinan University lies on the outskirts of Tripoli, which is the Northern Governorate of Lebanon. Close to the border of Syria, the city has long felt the impact of its neighbours’ politics. The embers of the Syrian conflict have singed the region, particularly in an area aptly named ‘Syria Street.’

Adjacent to this street lies the Sunni neighbourhood of Bab-al Tabbeneh, and residents there have spent years clashing with the Alawite Muslim residents of Jabal Mohsen, who support the Alawite-led Syrian regime. The two neighbourhoods directly face one another, which has resulted in intense firefights within a few metres distance, placing a devastating toll on civilians who have been caught in the clashes. The buildings remain pockmarked with RPG, bullet and mortar holes.

The Bab al Tabbaneh and Jabel Mohsen conflict began after the Lebanese civil war in the early ’90s, but the recent conflict in Syria has added other dimensions to it, profoundly shaping the dynamics of Tripolitan society. This is mainly due to the influx of Syrian refugees, which is raising tensions within the community. 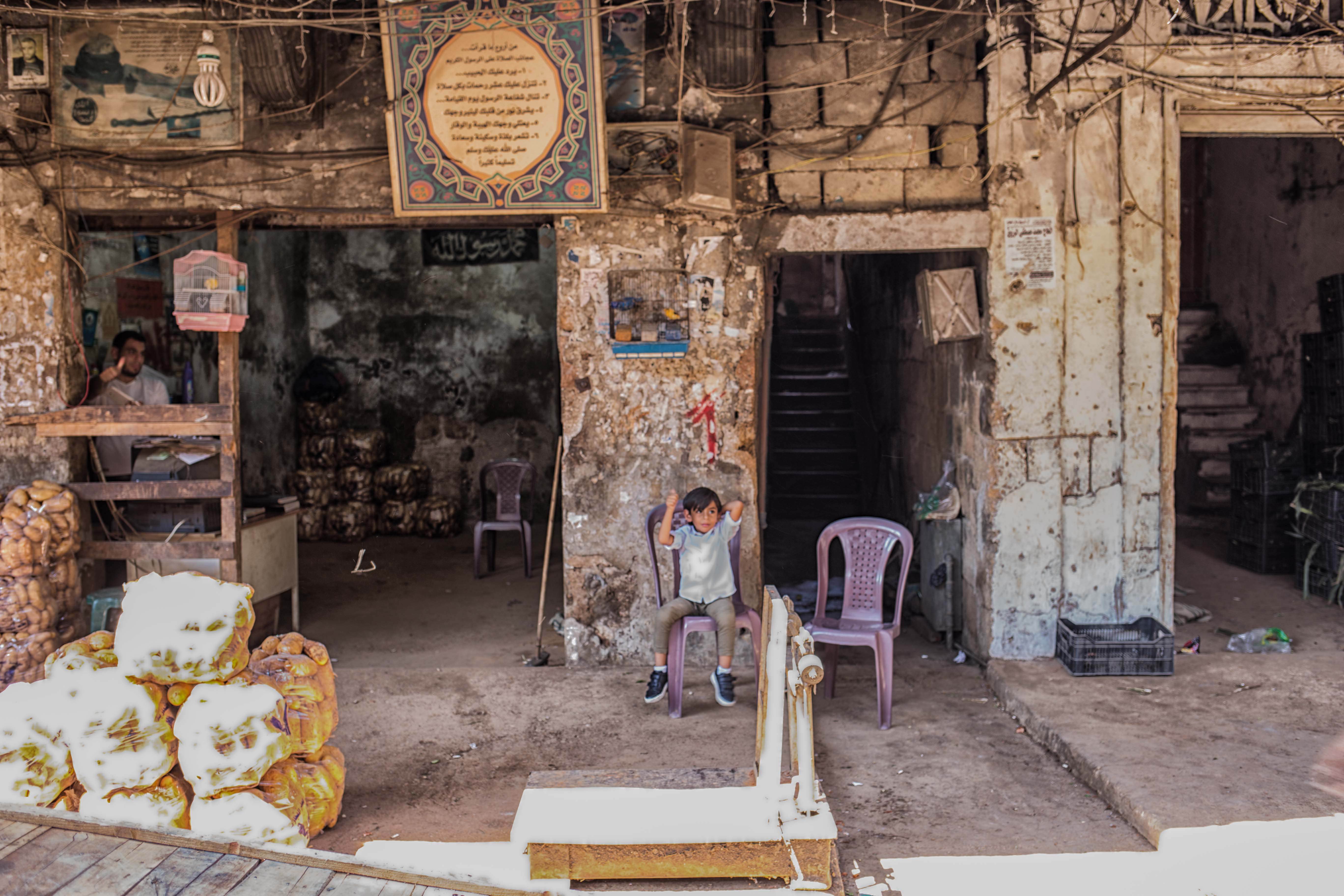 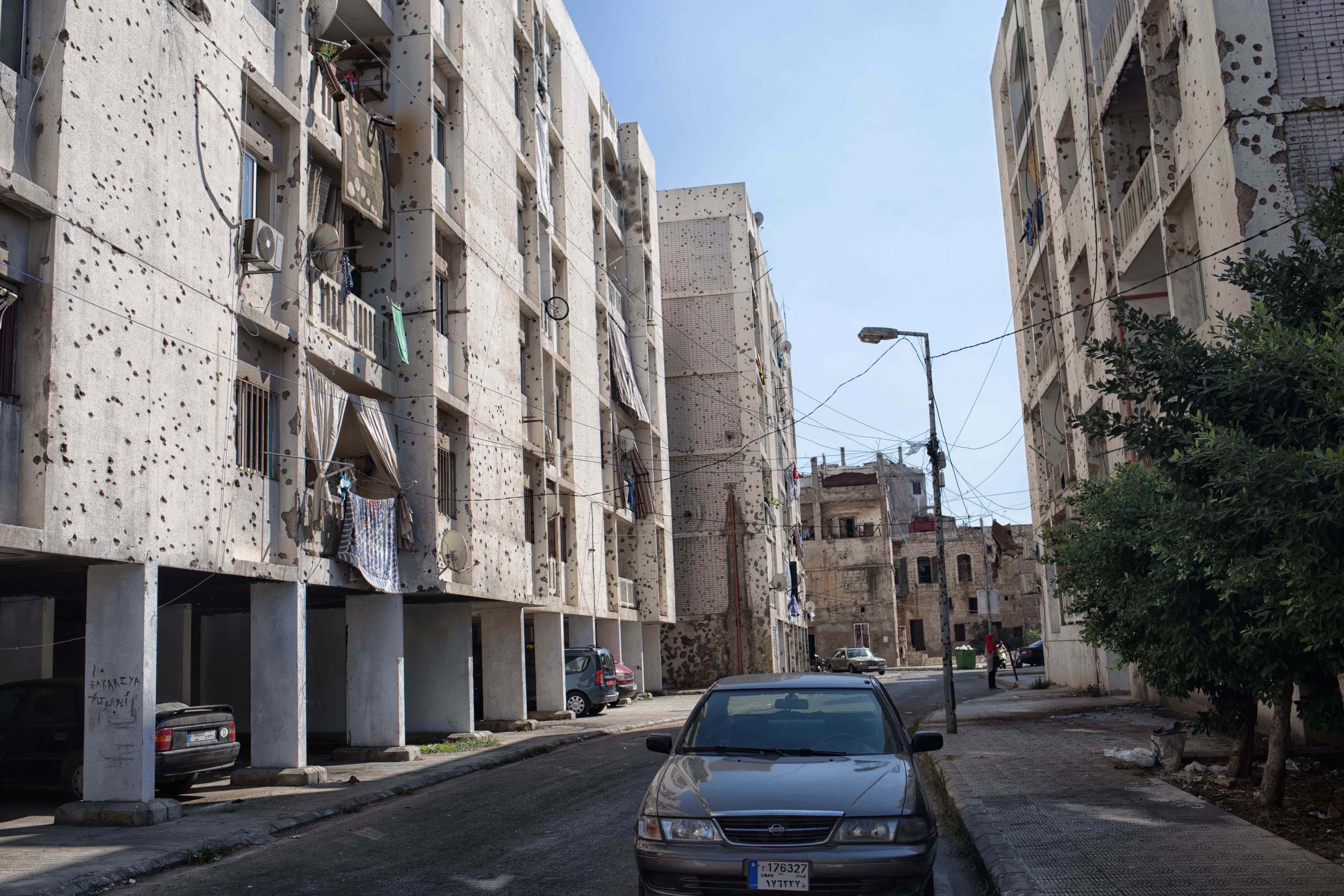 Bullet marks from the fighting four years ago can be seen scarring buildings in the neighbourhood of Bab -al Tabbaneh.

Although often depicted as a conflict along Sectarian lines, some Tripoli locals argue that the fighting has both political and economic ties. Many believe international backers are supporting the flow of arms that are escalating the conflict in the neighbourhood. Since the end of the Lebanese Civil war in the ’90s, Tripoli faced serious economic decline. Locals argue the Saudis back the Sunnis, and the Syrian regime backs the Alawites, with both sides preying on an already economically vulnerable community to carry weapons and influence politics in Lebanon. Tripoli is, after all, the “Second city of Lebanon” following Beirut, and therefore an integral player in domestic politics.

In the last few years, however, things seem to have settled in the city. After an ISIS sleeper cell was seen to be active in Tabbaneh, the Lebanese army implemented a new security plan in 2014 which witnessed the rolling in of tanks and troops to take control and maintain order in the area. Since then, the conflict has largely ceased – but the looming presence of the tanks remain.

Nour arrived in Lebanon from Syria in 2009, with plans to study History at university. After the war broke out, he was forced to stop his studies, and faced a tough situation psychologically due to his family being separated by the conflict (his sisters currently reside in Turkey, and his Mother and Father in Hama, Syria).

Eventually, Nour secured a full scholarship to study Radio and TV at Jinan University in Tripoli. Following nine years of separation, his parents both managed a complicated and risky visit to see him. 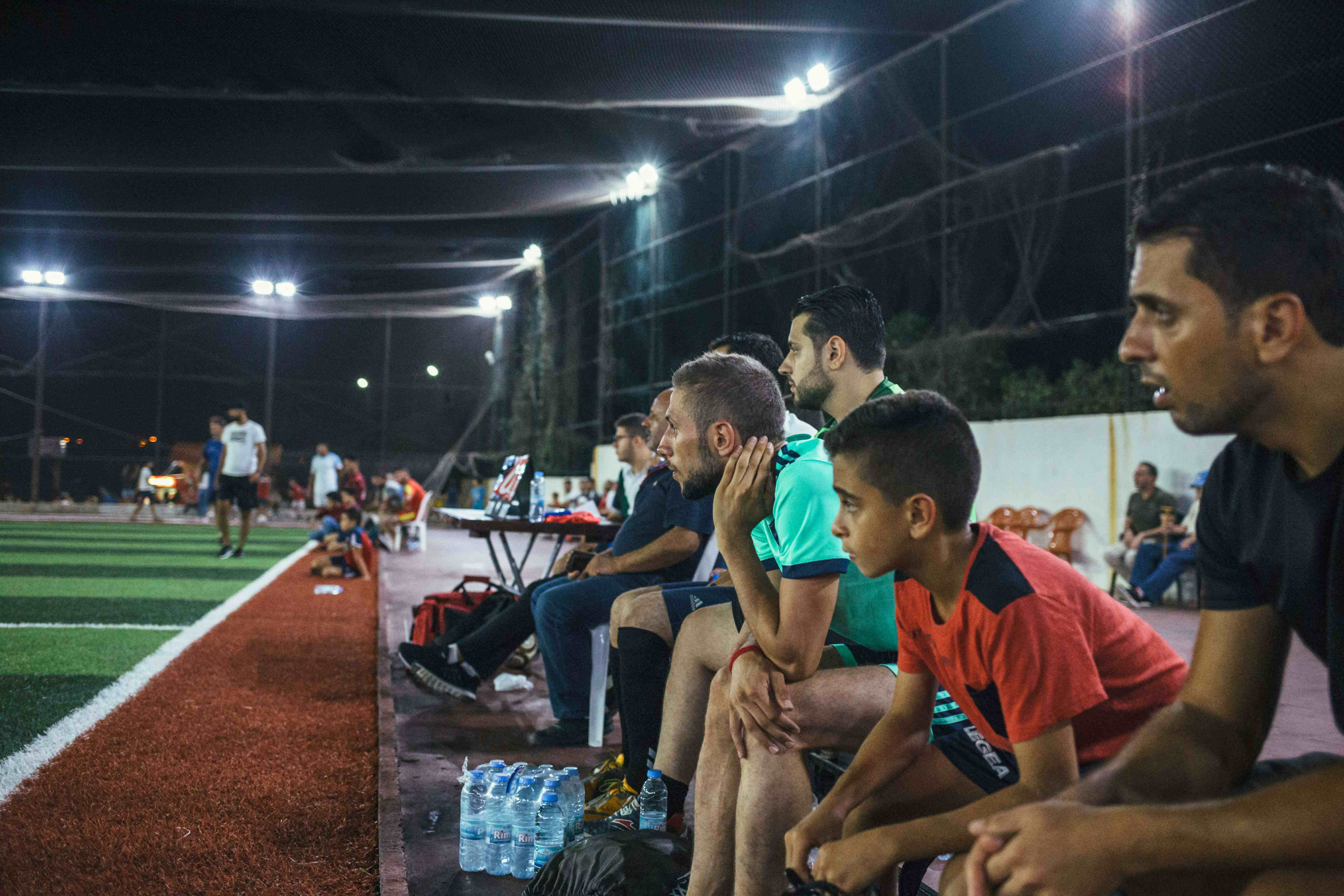 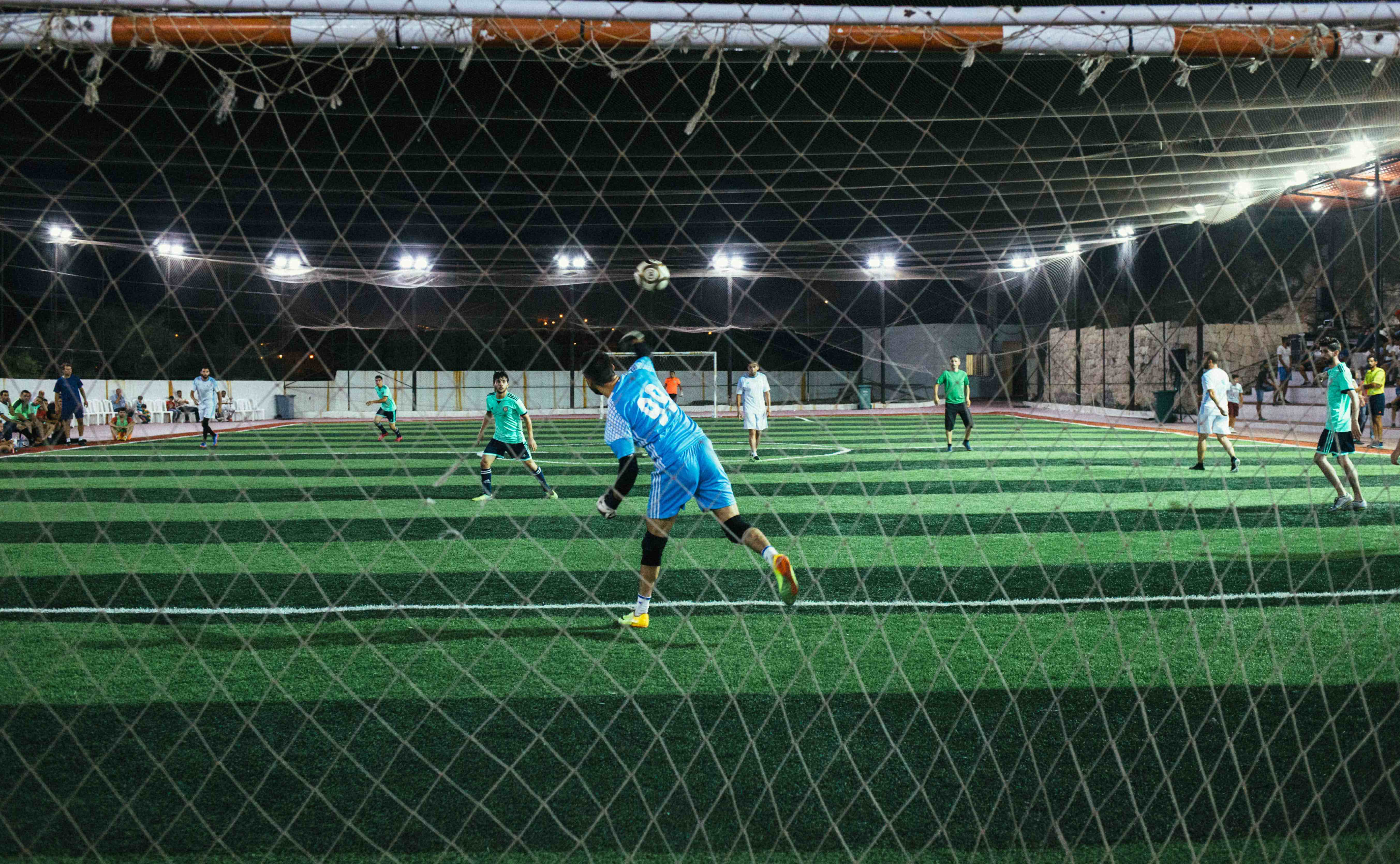 “My dad was worried all this time about being caught by the Syrian military at the border, and possibly being forced into the army,” Nour explains. “For this, he has been scared to visit me for many years.”

He understands his father’s concerns. “My Uncles were killed by Hafez al Assad in the 1982 Hama massacre,” he says “The soldiers came into the neighbourhood, lined up the men – including my uncles and grandfather – and shot them. I know how bad it can be.”

When Nour first arrived in Lebanon he lived near Tabbeneh, a community suffering from the hidden scars of the Tabbaneh-Jabal Mohsen conflict. The community was riddled with drug and economic problems, not to mention adverse hostility towards Syrians. The vulnerable local Lebanese community, who have long been neglected by the state, saw the surge of NGOs working there as solely focused on the Syrians. They believed that they were being ignored, which created significant tension.

“It was hard at first to settle in as a Syrian,” remembers Nour. “Many people here blame us for the fighting, and associate us with violence from the Syrian conflict and Assad… but after some time, things began to fix themselves.”

Football for many of the team members of Jinan University is not only an escape from their previous experiences, but also a sign of optimistic times ahead – one in which the usual divisions of identity no longer matter.

Zaidoon, another member of the team, left Baghdad in Iraq to study in Lebanon. “I felt depressed playing football in Iraq despite playing it there for years,” he says. “After 2007, the Football Federation there changed financiers to one that was Shi’ite dominated.” As a Sunni, Zaidoon suffered discrimination and the federation ended up dropping skilled Sunni players such as himself. In Lebanon, the diversity of the University’s football team gave Zaidoon the motivation to play again. 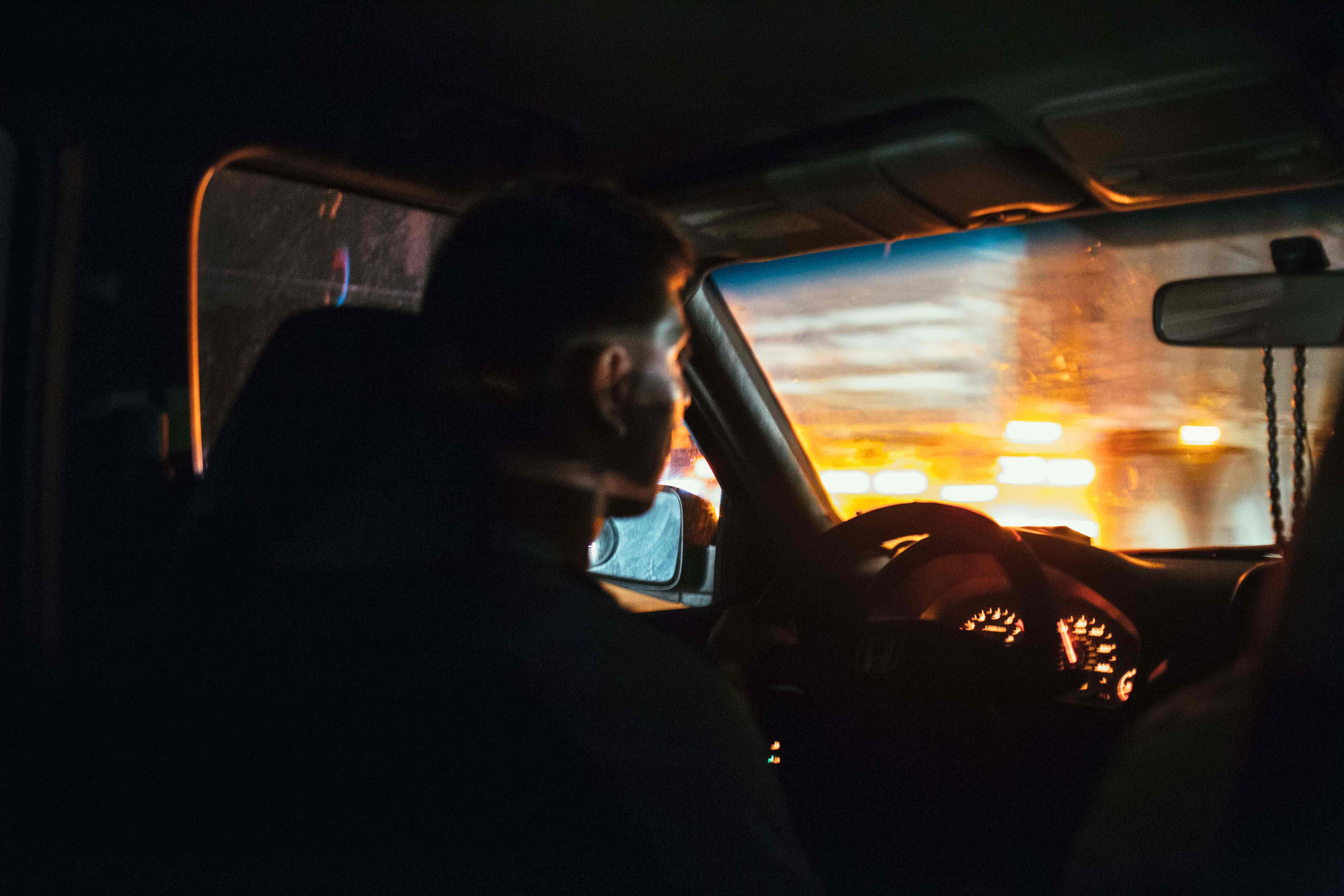 The Jinan University football team drive up to one of their matches playing music to prepare themselves for the game ahead. 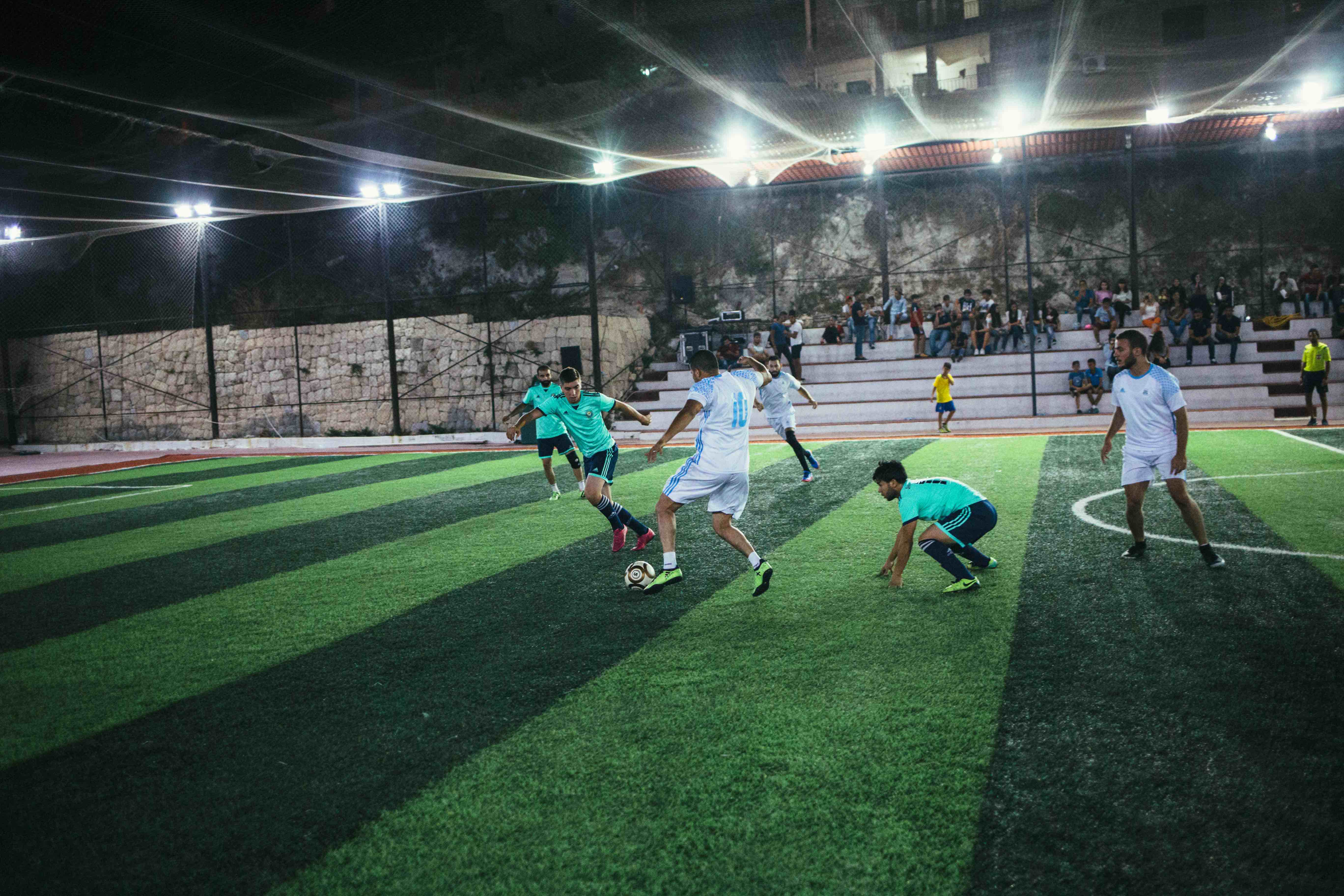 The player’s backgrounds are not only varied in nationality, but also in expertise. They are students in subjects that range from Digital Creative Arts, Genetics, Radio and TV, to Islamic Law.

It’s a diversity that makes Nour immensely proud. “In football, no matter where we are from – Palestinian, Iraqi, Syrian, Sunni, Alawite – we are all one team,” he says.

But identity politics are never far from the surface in Lebanon. As a Syrian, the top clubs which Nour could play for would have to pay extra for him, in comparison to being able to hire multiple Lebanese players for the same cost. Because of this, only a few Syrian players succeed in getting hired this way.

While Jinan University does eventually make the local league’s semi-finals, they fail to reach the next stage of the competition. As their final match draws to a close, they pack up their kits, shake hands with the other team and return to their car in silence. They may have lost, “but there is always next year,” says Nour, smiling a little.

For now, the team will return to their studies. Some members – including Nour – will also opt to coach others in the sport (including children who have been displaced by the Syrian conflict). While their future may not be certain, there is still a mood of quiet optimism among the players.

“When I play, I forget everything; nationality, which country I’m playing in, if I’m sick, if I’m depressed… it doesn’t matter,” adds Ahmed, the team’s striker. “Football takes all my worries away.” 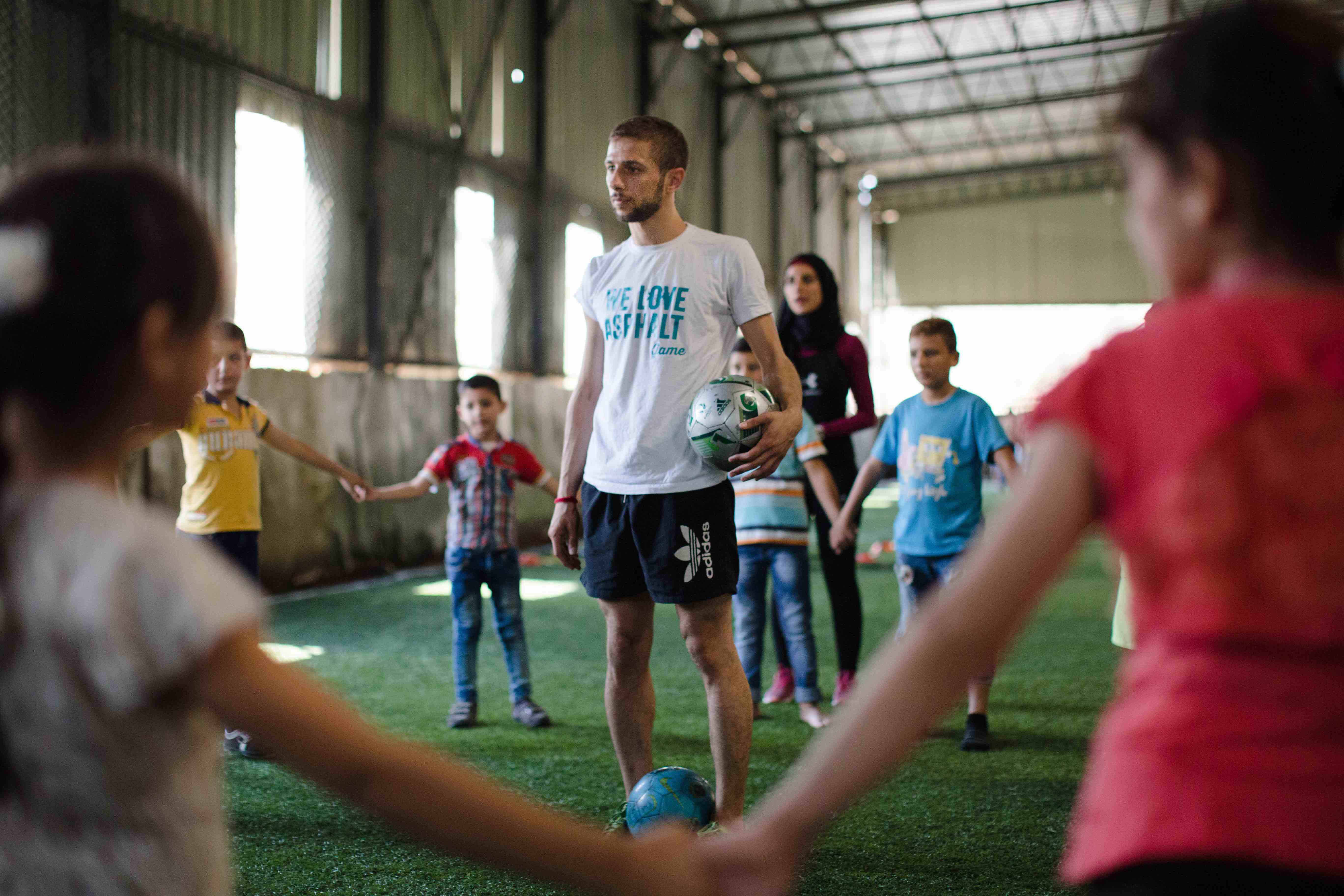 Nour Melli coaches children at a session of ‘The Game’, teaching young children, including refugees, football as well as other team building activties. 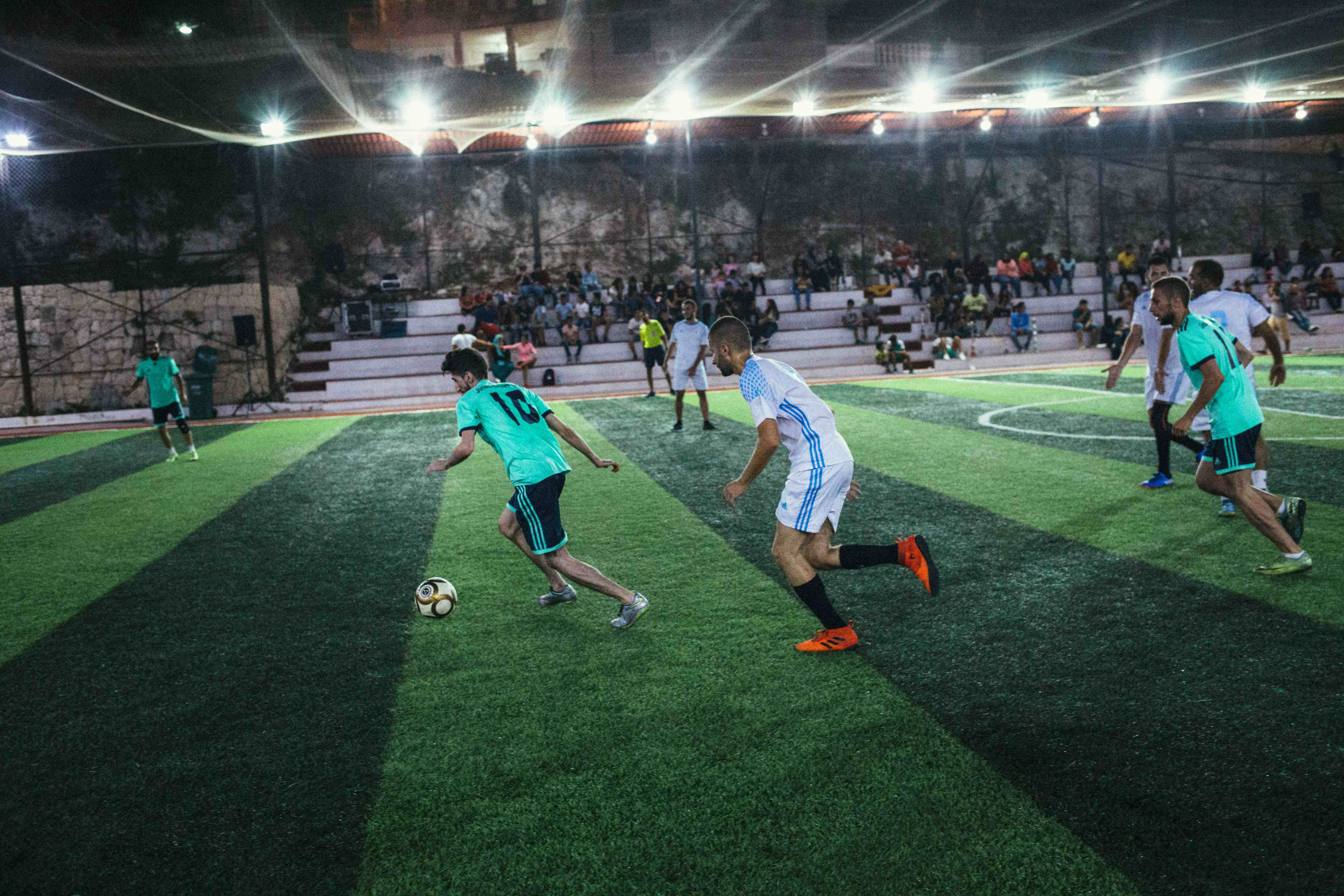 Linkedin
RELATED ARTICLES
OTHER ARTICLES
With a new bill seeking to further criminalise asylum seekers, the work of a group of volunteers monitoring small boats in the English Channel is all the more vital.
Photographer Alice Mann reflects on capturing the camaraderie and discipline it takes to succeed in a highly-competitive sport.
The Philadelphia local has made a name for himself capturing the hardcore scene – and over more recent years, he’s been ramping up his coverage of the fight for social justice.
The musician, DJ and founder of Monika Enterprise reflects on a career defined by revolution and rule-breaking.
The New York MC reflects on his experience with Trumpian US immigration policy, and how it impacted his career.
Mike Smith’s intimate photos offer a detailed record of the inhabitants of Boston’s streets in his characteristic non-judgmental yet direct approach.