Outdoor / Sport / Uncovering the dark side of Russian rhythmic gymnastics 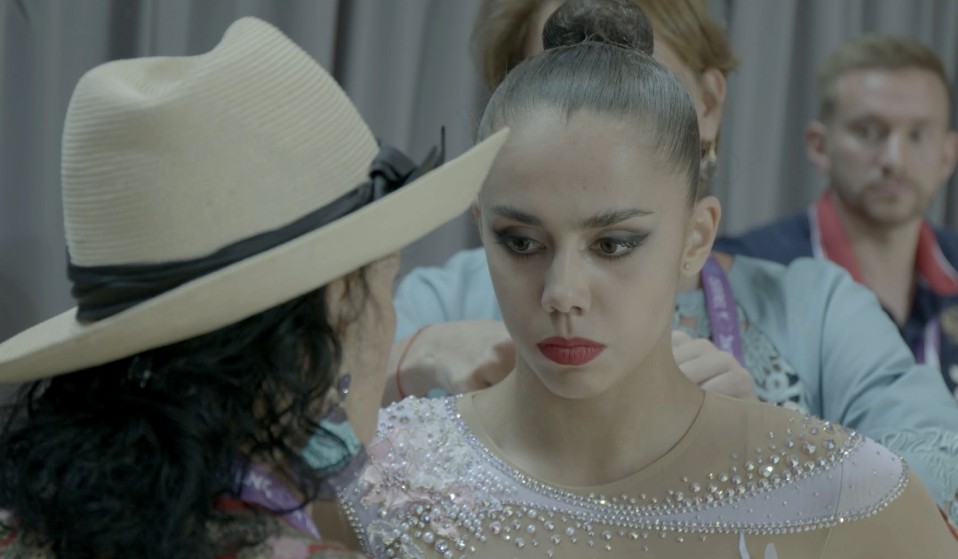 A new documentary follows gymnast Margarita Mamun as she trains for the Olympics – exposing a blunt, brutal and abusive preparation regime.

A new documentary follows gymnast Margarita Mamun as she trains for the Olympics – exposing a blunt, brutal and abusive preparation regime.

In the past few years, the words “doping” and “Russian sport” have almost become synonymous. When it became apparent in 2015 that the nation was not only doping on a wide-scale but that the process was institutionalised, much was said about the scientists, coaches and politicians that made this possible. Not so much was said about the individual sporting professionals that were at risk of losing their access to compete, essentially losing everything they had worked for.

Director and former gymnast Marta Prus sought out one of these athletes for her documentary Over the Limit. However, while she found that doping was a concern, it transpired that Russian athletes have a lot more than drug scandals to contend with.

Prus followed rhythmic gymnast Margarita Mamun for 100 days in the lead up to the Rio Olympics, filming the brutal way athletes are “prepared” for competitions. Margarita’s fur-clad, jewel-adorned coach, Irina Alexandrovna Viner-Usmanova – also the wife of an oligarch – fires off verbal tirades every time her young ward slips up, making training hard to distinguish from abuse.

Prus’s objective lens doesn’t just expose the practices of Russian gymnastics training, it also paints a captivating portrait of a young woman striving to win a gold medal at the most important sporting event in the world. During Sheffield Doc/Fest where the film had its UK premiere, Prus sat down with Huck to discuss her admittance into such a private world, and how Margarita dealt with the pressure.

How did you find your subject, Margarita Mamun?
The main coach of the Russian team, Irina Alexandrovna Viner-Usmanova, was the best in the world, and was winning nearly 20 gold medals in the world championships. So, I went to Moscow to see her in person and to look for a young gymnast that I could communicate with easily. I started this film when I was 26, so I was young and I wanted to film someone I could relate to. I thought it would be impossible to observe someone as important as Irina because I didn’t think I would have artistic freedom. I decided I wanted to create an emotional portrait of a girl.

Many of the conversations between the coaches and Margarita are very brutal. Did they ever ask you to stop filming?
Because they are doing very important work – for their country – they never changed their method because of me or the film. They didn’t see the film as important as their work, so they didn’t change anything and they didn’t even notice me. Maybe just at the very end, very near the Olympics, I think Amina Vasilovna Zaripova (the other coach) was quite tired with the camera, but I think that was because Irina was very strict, and she didn’t like that I was filming her being humiliated. But, when it came to Margarita, it was fine for both of the coaches for me to film.

What was your relationship like with the coaches?
My relationship with these characters was different. Normally, we see documentaries where the characters are kind of privileged because the director picked them and the director wants to tell their story. In this film, it was the opposite because I had been trying for three years for them to let me film and let me into their world. Once I started, they just neglected me, they didn’t care about me. On the one hand it was good because if I wasn’t disturbing them I could just get on and shoot, but on the other hand, it was hard to get into their private lives. Usually, I have very close relationships with subjects, so this was new to me. 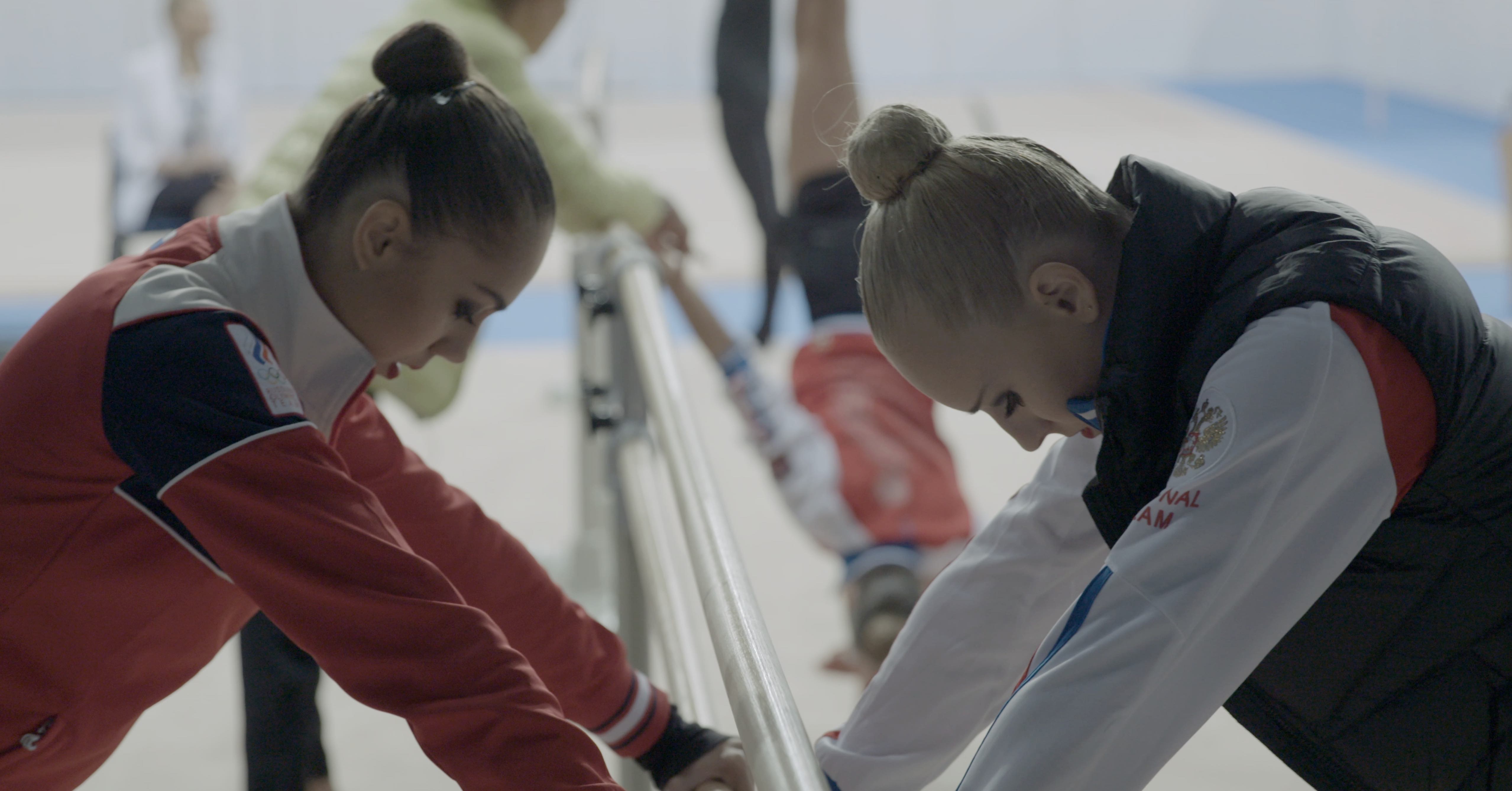 With Amina we sometimes see different sides to her: as well as being brutal, she can also be very affectionate and loving with Margarita. Did you ever get this from Irina?
If I had seen it, I would have put it in the film. Maybe the problem was that it was the year before the Olympics so there was a lot of pressure on them. In the film, we are focused on Margarita and how she is treated, but the pressure comes from the society, who put pressure on the coaches to repeat past successes, and the coaches put this pressure on the gymnasts. There is a lot of pressure in this world.

The way the coaches treat Margarita is like an abusive relationship – they shower her with praise one minute and yell profanities at her the next. Did you get the sense that Margarita knew this was happening?
If you are brought up in this kind of environment, I think it becomes quite natural and normal for you. I think there were some situations where she didn’t think their behaviour was extraordinary, but she is also a very conscious person and there were moments when she really didn’t like the way she was treated. She was earning good money though, and she had the chance to win the Olympic games, which is obviously the top championships in the sports world. I also think that even if she was conscious of the fact she didn’t like the way they were treating her, she was still able to block it out and focus on her work.

Aside from this national pressure, she had her own personal motivation because when she is on the podium it is her medal. Mentally, she is a very strong person, so she was able to erase her memory and those harsh words. When she watched the film, she was like ‘Oh my God, I didn’t know it was like that’ or ‘I don’t remember this.’ I think she was trying not to listen to them. 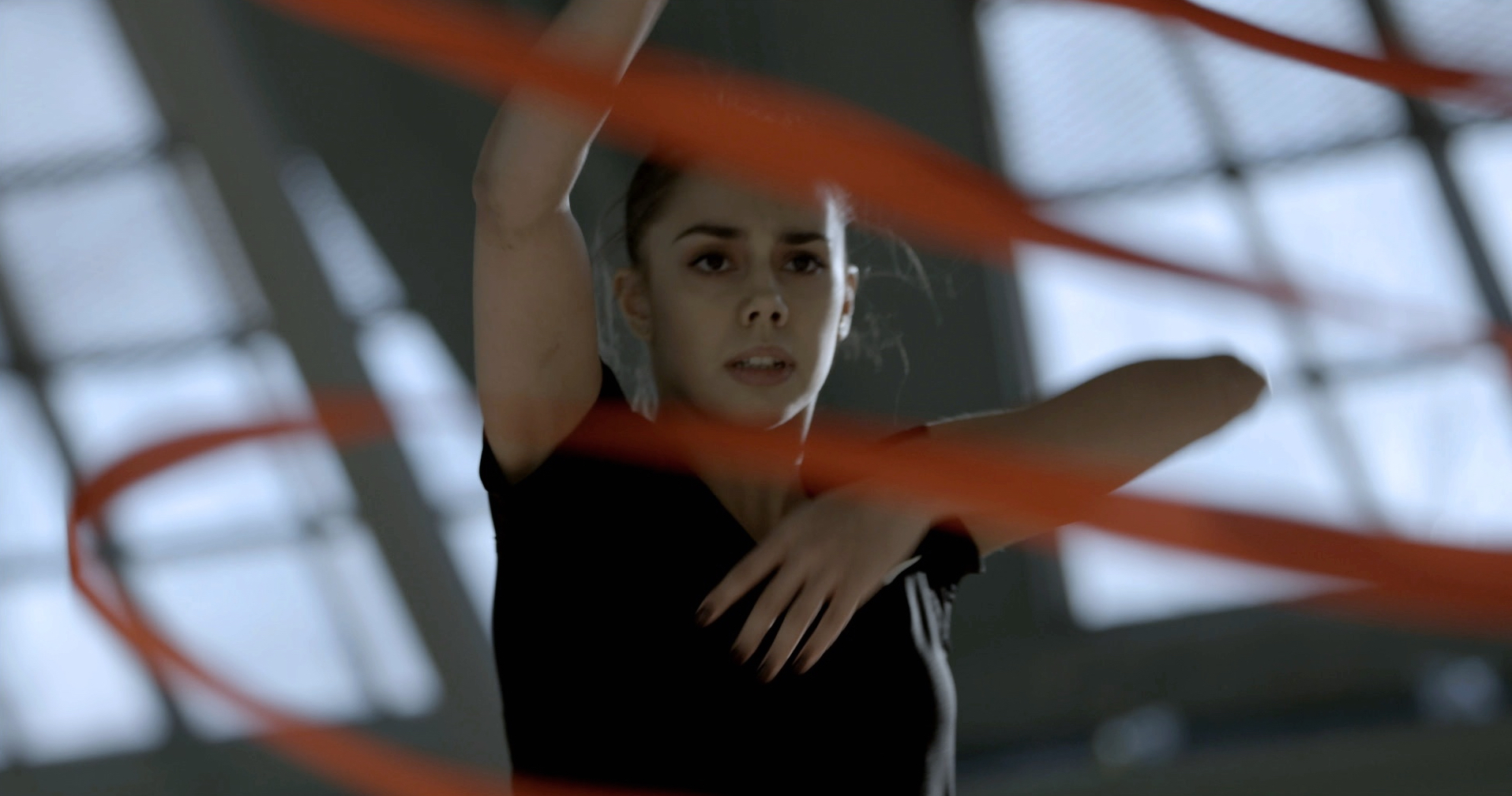 Amina says at one point: ‘You are not a human being, you are an athlete.’ Do you think you captured an athlete or a human?
I wanted to capture a human – absolutely – that’s why when we were editing we didn’t put too much footage of gymnastics in the film. I also didn’t want too many details about the sport included because I wanted to create an intimate portrait of a girl in a hard environment. We had a lot of performance recorded and we knew that we needed to use it very carefully, so it didn’t become repetitive and boring. I made a directorial decision not to put the most important routine – the Olympic routine – in the film, to focus on the human and not the athlete.

What does Margarita think of the film?
She watched the film before the film premiere like all the characters, and she cried a lot. As you can see in the film, she doesn’t cry a lot, she is very strong. But she was crying almost throughout. I think she realised how hard it had been on her, because – as I said before – she was so focused on the aim she didn’t really notice what was happening at the time. She said that she loves the film and is very happy that it exists because it documents how hard it was. 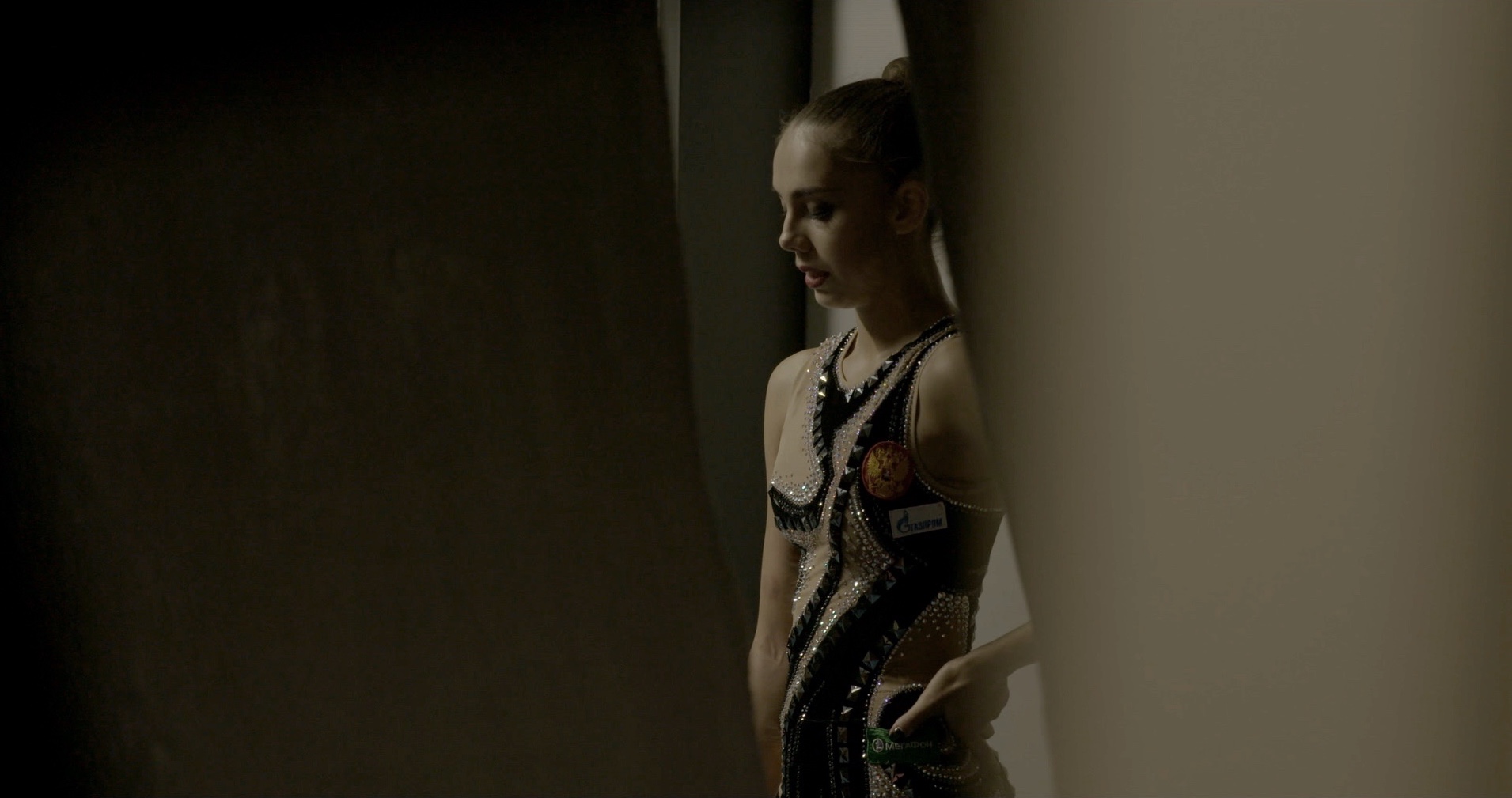 The doping scandal is referred to, but you don’t go into detail. Why not?
The scandal came out while I was shooting, and I did shoot some scenes about it. But, I decided it was more of a current affairs theme, and in several years people won’t care about it as much. I wanted to make a universal story. I didn’t want to investigate it.

You film footage with Margarita and some of the other gymnasts – my impression was that their friendships gave each other strength – do you agree?
Before I started filming, I thought that Margarita and Yana Kudryavtseva would have some sort of rivalry. They were always switching positions between first and second place. I thought their rivalry could be a concept for the film – I liked this idea that your only friend was your biggest rival. But, in fact, it’s not like that at all. They are so lonely and only have other gymnasts. They are smart enough to realise that and to support one another. Yana and Margarita are totally different people and if they weren’t working together I don’t think they would be friends. But, they really support each other. In general, the Russian team are always rooting for each other and there is a very strong community. This part of the gymnastics world is really quite nice. 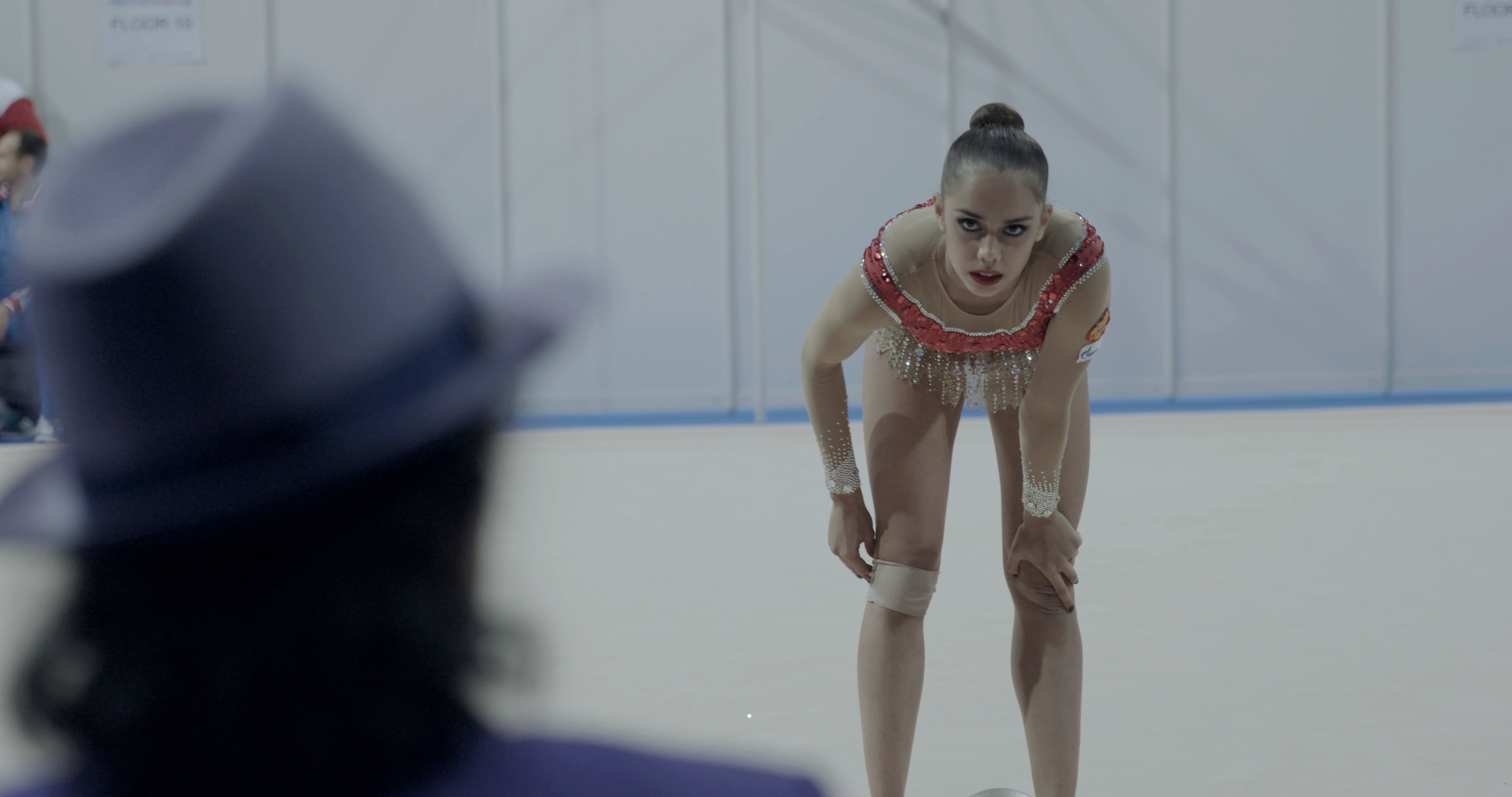 Over the Limit screened at Sheffield Doc/Fest, June 7-12. More information can be found on the film’s official Facebook page.

Linkedin
RELATED ARTICLES
OTHER ARTICLES
In her new book, the author explores the country’s housing crisis in human terms and calls for radical action to address a broken system.
Wealth inequality and the rising cost of socialising is placing a strain on people’s relationships, reports Eve Upton-Clark.
The past five years have seen a staggering increase in foodbank usage across the UK. Now, staff fear things are set to get much worse.
A new edition of a seminal book brings together iconic images of the band onstage in their full glory and backstage in moments of unguarded camaraderie.
Photographer Matthew Brookes recalls following a group of young people in Venice Beach living in search of the perfect wave.
Whether it's partygate, the climate crisis or the spiralling cost of living, the fightback begins on the picket lines writes Tommy Vickerstaff