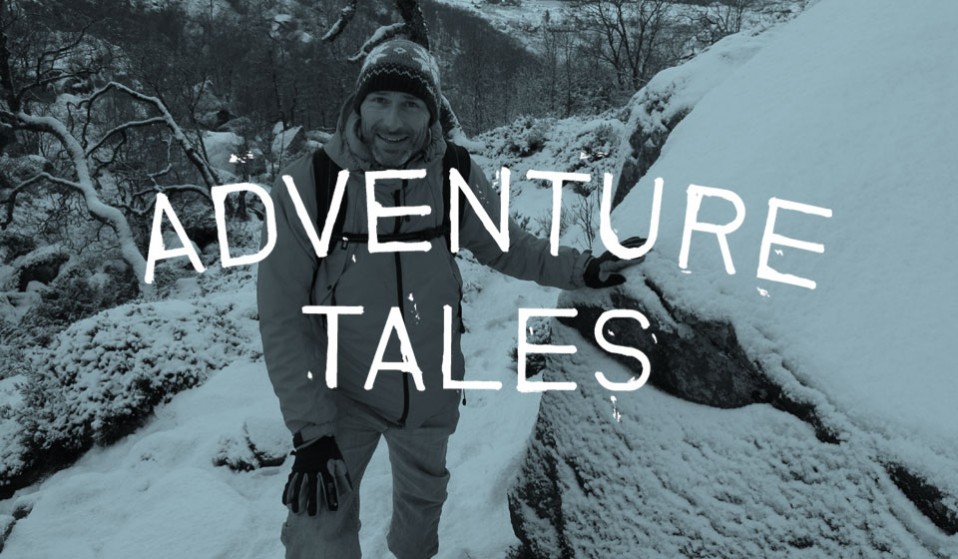 With a surf film festival in London and a predilection for cold-water surfing, Chris Nelson finds adventure in unexpected places. Here he reflects on the wild tales of his life.

With a surf film festival in London and a predilection for cold-water surfing, Chris Nelson finds adventure in unexpected places. Here he reflects on the wild tales of his life.

For this pop quiz we approached London Surf Film Festival founder Chris Nelson. Whether he’s bringing free-flowing celluloid to a land-locked audience for LSFF or documenting the chilly side of waveriding for his book Cold Water Souls, Chris keeps things interesting by always taking the path of most resistance.

What do you picture when you hear the word ‘adventure’?
The 1923 Everest Expedition, that was real ‘adventure’ – Odell out high on the Northeast ridge, looking for the returning Mallory and Irvine. Leather boots, tweed, wool, buttons. Men who’d lived through the horrors of the First World War, standing at the top of the world in this alien environment.

What did adventure mean to you when you were a kid?
Being about 10, heading out at sunrise, coming home at sunset. Self-made cheese sandwiches, getting on our bikes and riding for hours along the canal with fishing rods, swimming in the locks, picking off leeches, drying out in the sun. That was just normal. It only seems adventurous in hindsight.

What does adventure mean to you now?
I’d like to be able to say something environmental like I still ride my bike, but the truth is it’s hard to beat that feeling when you’re sitting on the runway, chewing on a sweet, hearing the pitch of the engines climb, knowing you’re heading halfway across the world and not really knowing exactly what you’ll find. Even in this digital world no amount of advance research can prepare you for the smell, the feel, the taste of a new place.

When was the last time you felt completely out of your comfort zone?
Paddling out in the Indian Ocean, miles from anywhere in Central Java, looking at eight-foot barrels spinning down a shallow urchin-infested reef, with just a couple of locals out. After two weeks of surfing cruisy, point-break walls, this was suddenly proper. You need to push yourself out of your comfort zone for experiences you’ll never forget.

When were you last scared?
Indo roads. Being driven eight hours through oncoming trucks and buses.

What’s the most adventurous thing you’ve ever done?
Packed in my job, bought a van, and went on the road for a year with Demi Taylor, travelling from the Orkneys down to the south of Morocco, following the Atlantic coastline all the way. Our aim was to write a book. This was 2001 and everyone thought we were mad. It turned out to be one of the best surf seasons on record and we scored a book deal when we returned. It was a case of making the leap.

Who is the most adventurous person you know?
I’d have to pick two people for different reasons – Basque surfer Kepa Acero is an old friend who travels by himself, literally into the heart of darkness. Namibia, Chile, Indo, Patagonia, Antarctica, Alaska. By travelling alone he integrates with the local people, and his lo-fi movies are inspirational. The other would be Pat Kieran, pioneering Thurso surfer. Moved from Liverpool to the Scottish North Shore in 1976, riding through the rain and snow on his motorbike with his board and a few belongings. I don’t think he realises how much he changed UK surfing.

If your life was an adventure novel, what would the title be?
Northern Soul.

When was the last time you saw something completely new for the first time?
The great thing about going on adventures is that every time you travel you’re bathed in new experiences, exposed to fresh views, meeting new people. Returning to old destinations repeatedly you realise that you don’t really know a place, you know a moment in time; everywhere changes. Surf breaks get more crowded, new hotels get built, the vibe changes. Over time the familiar can become tinged with disappointment. However the new is always full of fresh opportunities. The past few years I’ve really invested in visiting a lot of new places – then trying somewhere else for the next trip.

How do you bring adventure into your everyday life?
Drive an old car, something with a bit of character. You never know where it will take you. I have a 1970s Volvo Estate – perfect surf wagon. You can pile it full of boards and head off, sleep in the back. Strangers approach you all the time to talk about it. Some become friends.

Complete the sentence: A life without adventure is…..?
Like a gas giant – a huge planet with an immense gravitational pull that seems to have a grip on a whole swathe of society. Its cumulative effects instill inertia from which we all have to gain traction to physically break free.

If you were on a yoga retreat, or in therapy, and were told to picture ‘your happy place’, what would it look like?
More likely therapy, I can’t even touch my toes. It’d be my local surf break, crystal green waters, stone engine houses towering on jagged cliff-tops like an Arthurian ruin, sitting in the line-up with a few friends between sets just absorbing the view.

What in life gets your adrenaline pumping?
When I first started surfing in the pre-internet days, before I could read a chart, we’d drive to the coast never knowing if there’d be surf waiting for us, or if we’d be greeted by a mill pond. The last turn in the road would open out to reveal the ocean and that split second before it came into view my adrenaline would be off the scale. I still get that feeling today, even if I think I know exactly what’s waiting, because the ocean will always surprise you. Turning that last corner is so sweet.

If you had to walk around the world, what would you carry in your backpack?
Imodium, earplugs and a good multilingual dictionary.

What book / film / song makes you wanna go an adventure?
The Psychopath Test by Jon Ronson – I love a journey mapped out by the interesting characters along the way. You know your starting point but where they’ll lead you, and who they’ll lead you to is unknown. The Beatles’ White Album is my outward bound album, it has that energy of something happening. Let It Be is for heading home – an album where you can sense the end is near. Litmus – Andrew Kidman’s dark masterpiece always makes me want to get on the ferry to Ireland and revel in drizzle-soaked perfection.

What’s the one thing on your bucket list you’ve never told anyone about before?
To climb one of the great 8000-metre summits – Everest (by the northeast ridge) or K2. Luckily I’m saved by the fact I have a crippling fear of heights. I have a massive respect for climbers. As surfers we can make mistakes, fall and get back up. The best climbers exist in a world where the margin for error is so fine – I’m amazed by the self confidence they must have to trust they won’t slip, cramp up or lose a finger hold.

Linkedin
RELATED ARTICLES
OTHER ARTICLES
The Adventure Issue takes Huck’s search for an indie culture manifesto into uncharted territory.
Tom Carroll uncovers the hidden history of Los Angeles in his Youtube channel Tom Explores LA. Here he talks about putting his life in harms way every day and the joys of the open road.
From tree houses in British Columbia and fishing in Alaska to frozen trees in Siberia and cliff edges in Yosemite, we collate some of the best adventure instagrammers for your wanderlust pleasure.