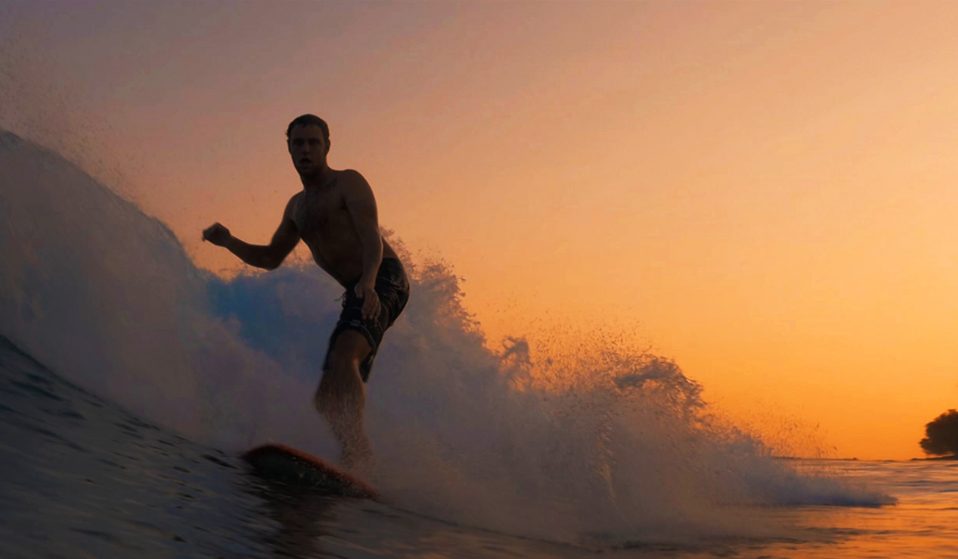 Bringing together eight musicians, 16 surfers and three oceans in one surreal film, Self Discovery for Social Survival subverts the format of surf's cult classics to hypnotic effect.

Bringing together eight musicians, 16 surfers and three oceans in one surreal film, Self Discovery for Social Survival subverts the format of surf's cult classics to hypnotic effect. And for director Chris Gentile, the moment reflects a wider renaissance for surf culture.

Chris Gentile is the kind of person who could inspire anyone to surf. Just listening to him talk about the magnetism of the sea, the power it holds, the sense of freedom it promises, feels infectious.

It’s a skill he relied on in directing Self Discovery For Social Survival: an experimental film that combines eight musicians with 16 surfers across three far-flung locations.

The project took root back in 2014, when Chris got acquainted with Keith Abrahamsson of record label Mexican Summer, who started re-releasing rare soundtracks of classic surf films.

Keith had cooked up a plan to take musicians Connan Mockasin and MGMT’s Andrew VanWyngarden to Nicaragua, where they’d record in a studio and film some surfing. But it became a logistical nightmare that soon fell apart.

Chris, however, lit up at just the thought of it. The 46-year-old has led an extraordinary career making things happen without fear of obstacles. He’s an artist, carpenter and photographer who has also worked as a creative director for Condé Nast and, in 2012, launched Pilgrim Surf + Supply, a lifestyle store in Brooklyn.

He’d always dreamed of making a surf film. Chris grew up loving cult classics on VHS, where the music and imagery were so carefully edited that both elements felt symbiotic – “almost visual novels of what surfing can feel like.”

But whereas those films were often constructed around their soundtracks, or vice versa, Chris imagined developing the two in tandem. This is where his skills as a surf evangelist came in handy. If anyone could pull off Keith’s original vision on an even bigger scale, it was Chris. 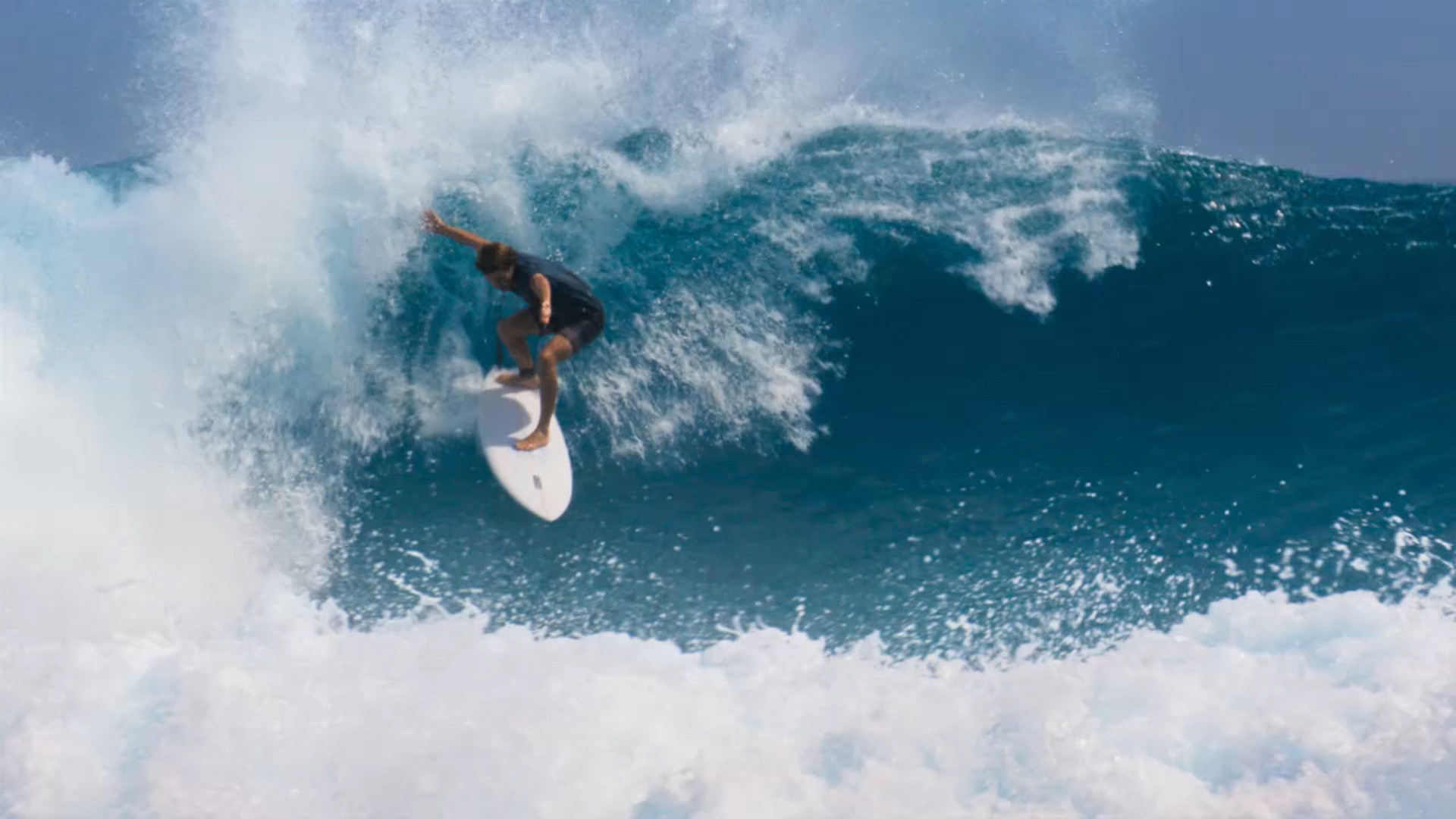 The idea was to go on a series of adventures with top surfers and luminary artists, chasing waves in unexpected places while filming as much as possible, then getting the musicians to record material inspired by that journey while it still felt fresh.

“We wanted to have these unique experiences where everything affected everything else: the surfing, the atmosphere, the food we ate, the air we were breathing, the light we were in,” says Chris. “But the rule was that each trip would last two weeks – and whatever we got, we got.”

“That letting go was important. I think part of the spirit of surfing and performing music is that sometimes you just don’t have all the control you want. And if you embrace that, you can find beauty in things that might ordinarily get overlooked.” 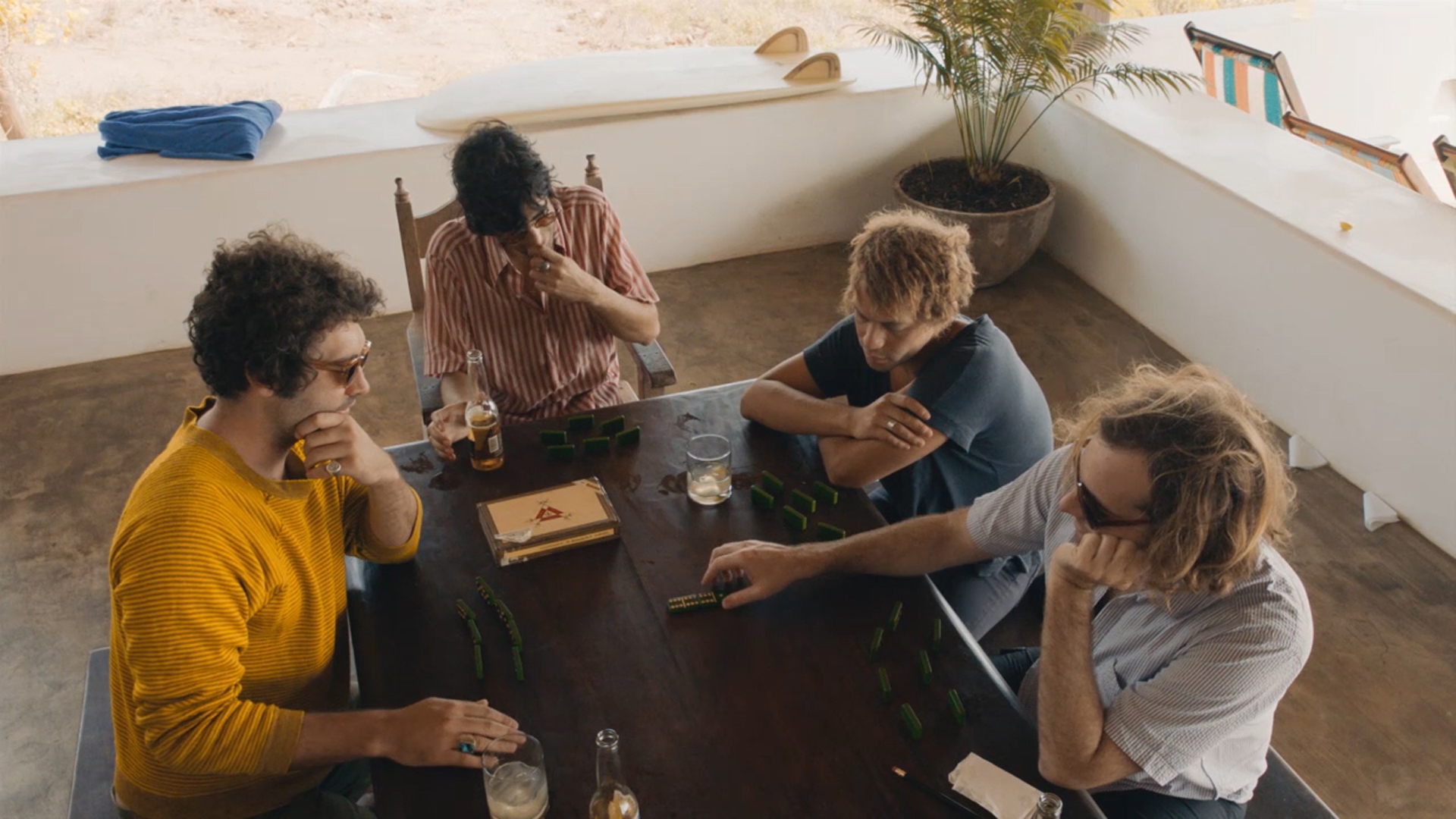 The Allah-Las in Mexico.

Much of the magic unfolded in the moments in-between surfing: a three-van convoy inching around treacherous mountain passes in Iceland, revealing uninhabited panoramas beneath them; or naked surfers doing drunken backflips at 3am in the Maldives, their beat-up boat seemingly on the verge of falling apart at any moment. All the while, that carefully curated mix of personalities had a chance to bond. 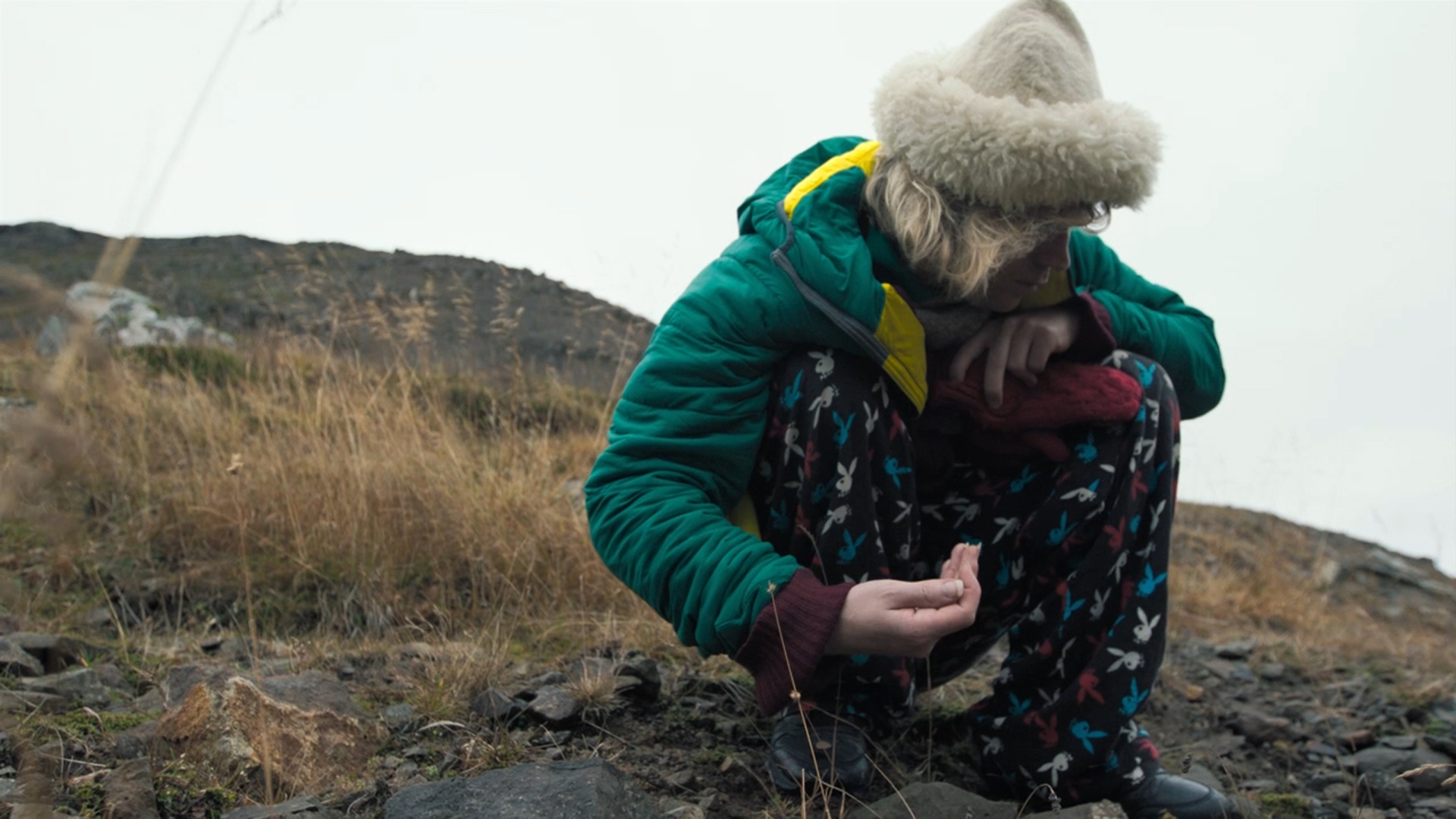 “You never know what you’re going to get with a surf trip,” says Chris. “I think Gerry Lopez famously said, ‘The best things in surfing happen in the parking lot.’ And that’s so true. It’s those transition periods where you’re sharing stories with people while coming out of the water or experiencing something weird together. My favourite thing was seeing those connections being made and extending beyond the trip. I think that’s what music and surfing can do to people: act as a conduit, a connector.”

Chris’ mindset is steeped in this kind of thinking. In conversation, he’s generous in spirit, quick to laugh and unfailingly polite, his answers peppered with an effortless flow of insight. But back when he studied art at the University of North Carolina, in 1996, Chris was more circumspect about his passion.

At the time, people often perceived surfers as “deadbeats who only give a shit about smoking weed, drinking beers, eating pizza and surfing,” he remembers with a laugh. “I was in a very vulnerable and fragile part of my young life as a person trying to pursue art. And so, being self-conscious, I worried about people knowing that I surfed because I thought they’d think I lacked intelligence and depth.” 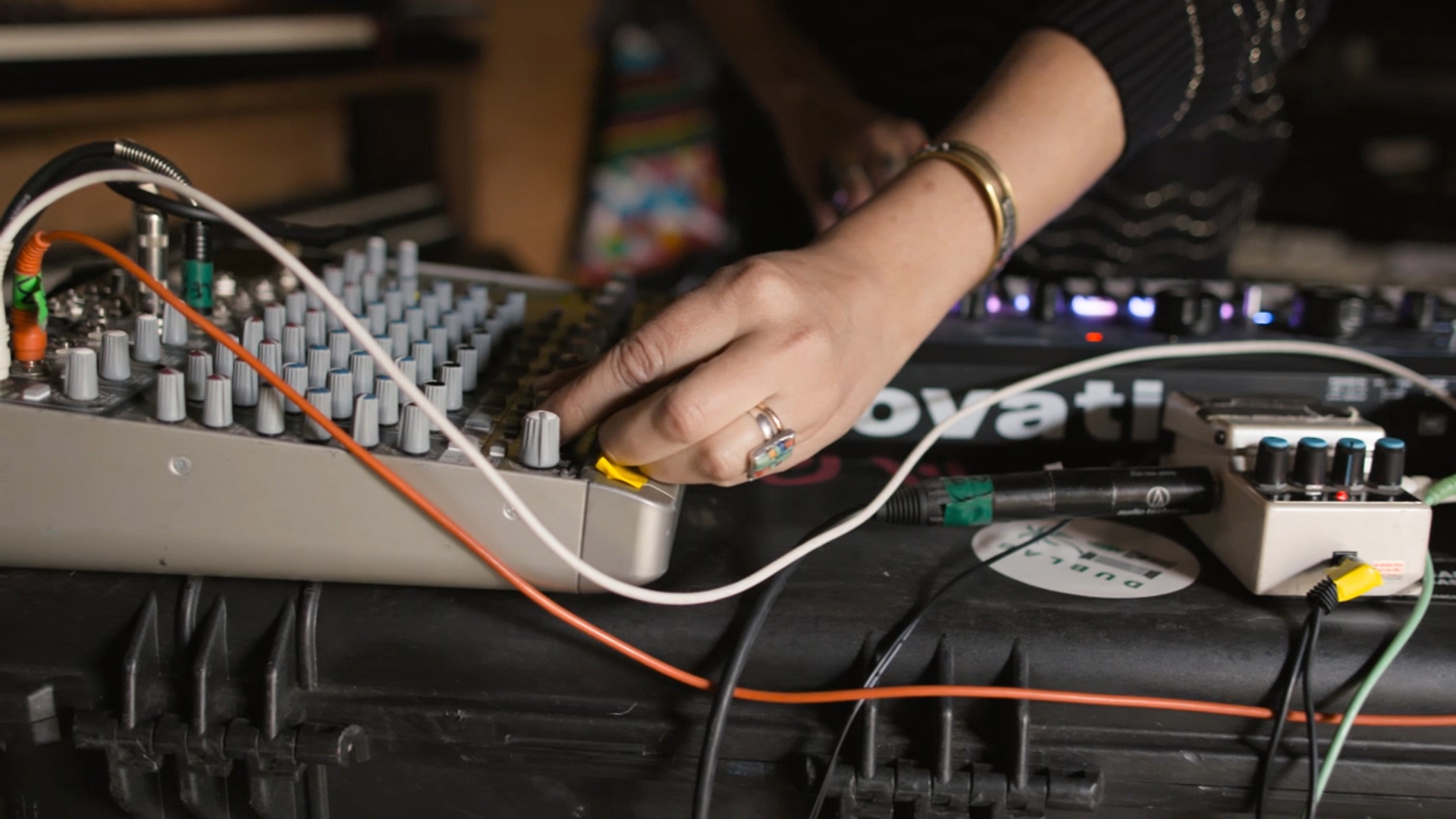 Peaking Lights in the studio, post-trip.

One day, visiting lecturer Dave Hickey [author of Air Guitar] stopped by Chris’ studio space. He took a look at the student’s artwork – “the kind of super fucking academic, horribly boring work I thought I needed to be making in school” – and assured him, over coffee and cigarettes, that he was just there to get to know him better.

But at some point during the conversation, Dave spotted a surfboard hidden behind some plywood in the back. When the lecturer asked Chris what it was doing there [they were in Chapel Hill, after all], he thought: “Oh shit, here we go.”

Instead, Dave launched into a vigorous history lesson, connecting the dots between artists such as John McCracken, Edward Shea, Chris Burton and Billy Al Bengston, before pointing out that they were all surfers whose passion for waves informed their work. 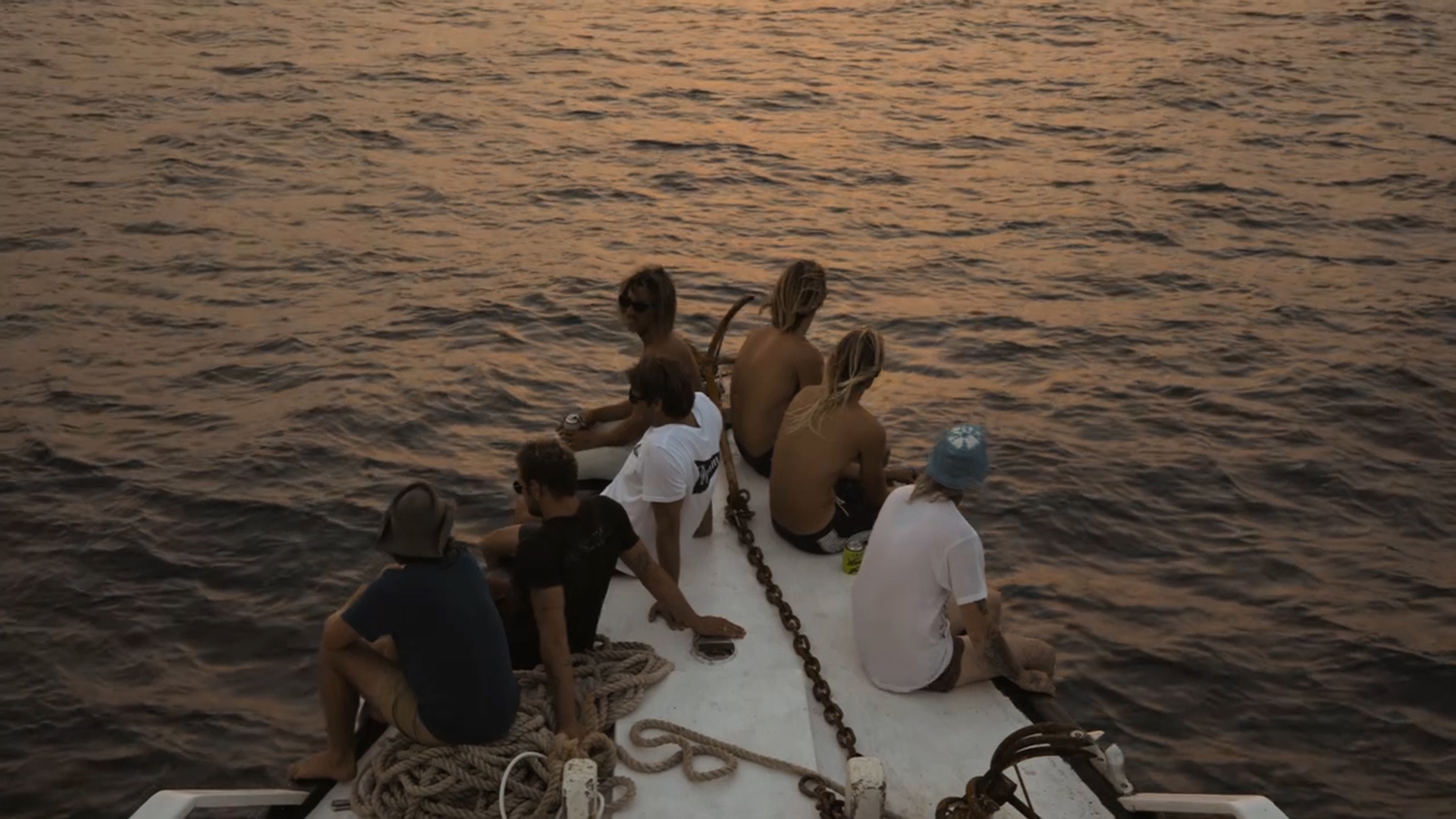 “He said, ‘This is what you’re passionate about, this is the shit that should be informing what you do. So where is it in your work? Like, what are you afraid of?’ And that moment was pivotal for me; it changed my life. Up until then, I was just making other people’s work.”

In 2001, Chris moved to New York and quickly felt in dialogue with a community of friends doing incredibly creative things. These artists, designers and writers all had surfing in common… but had no place to buy stuff like wax or booties within a 30-mile radius.

That inspired him to start his own surf shop, Mollusk, building a community (including people who hadn’t yet surfed) around the same countercultural connections that Dave Hickey emphasised. That allowed the likes Andrew Kidman and Thomas Campbell to draw from a confluence of ideas that encompassed everything from jazz and abstract expressionism to graffiti and motorcycle building. 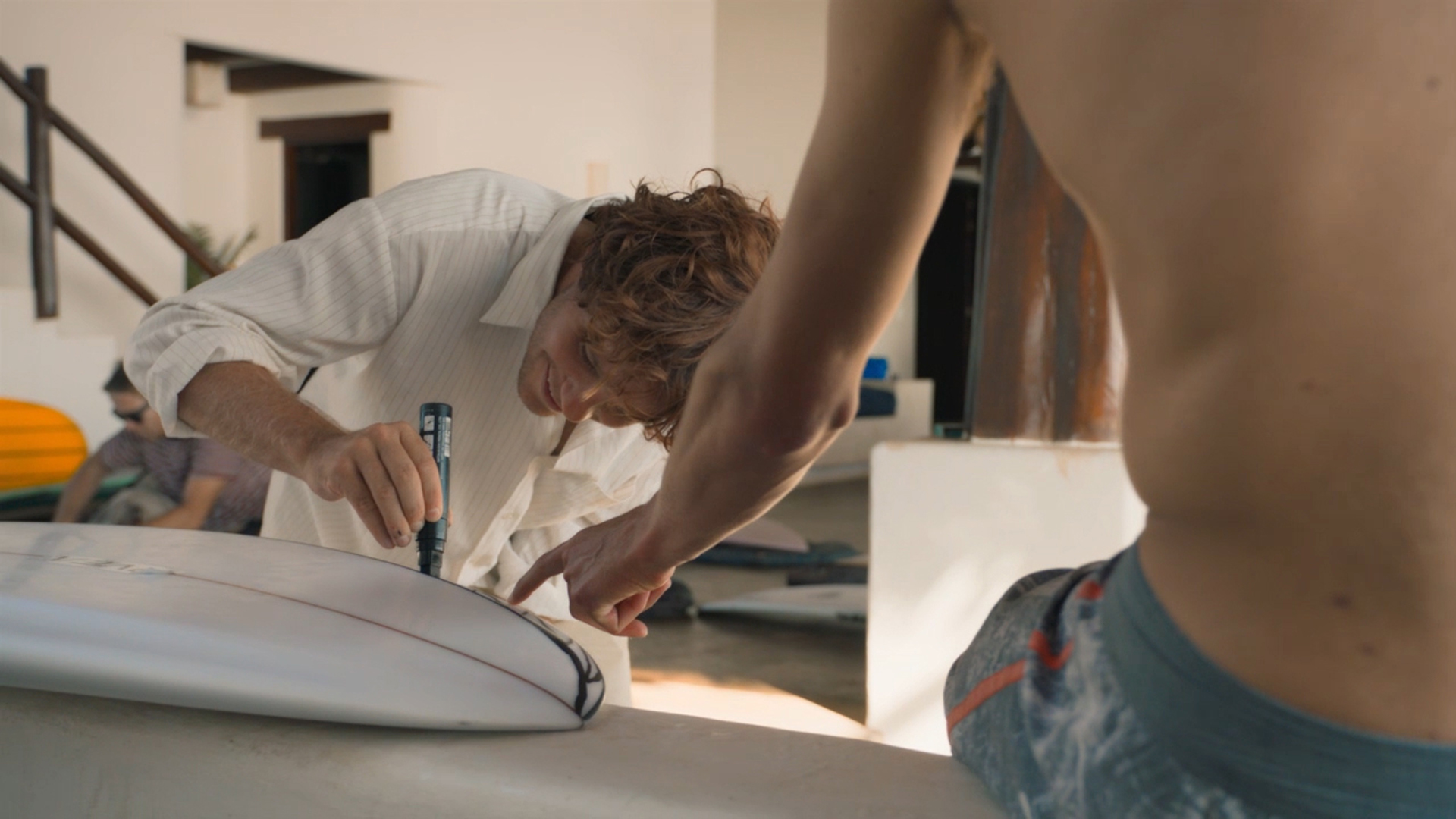 Today, Chris believes that kind of creative overlap has become the norm. Surf culture is enjoying a period of renaissance, where shops with a similar ethos have popped up around the world, serving as inclusive community centres for the artistically-minded.

“I feel like it’s taken a while, but we’re seeing the surf industry starting to fold into that, following in the footsteps of pioneering people and stores where the emphasis is on creating a positive culture for the environment. I think we’re in an exciting time of change and making this movie is a part of wanting to see that evolve.

“It’s incredible how many talented people I know, whether they’re artists or cooks, have come to surfing later in life. Maybe it’s because it’s an opportunity to be really challenged, or maybe because it’s also a chance to unplug and be contemplative, to open up a little bit. It just attracts a certain kind of person – and its image has experienced a 180-degree turn.” 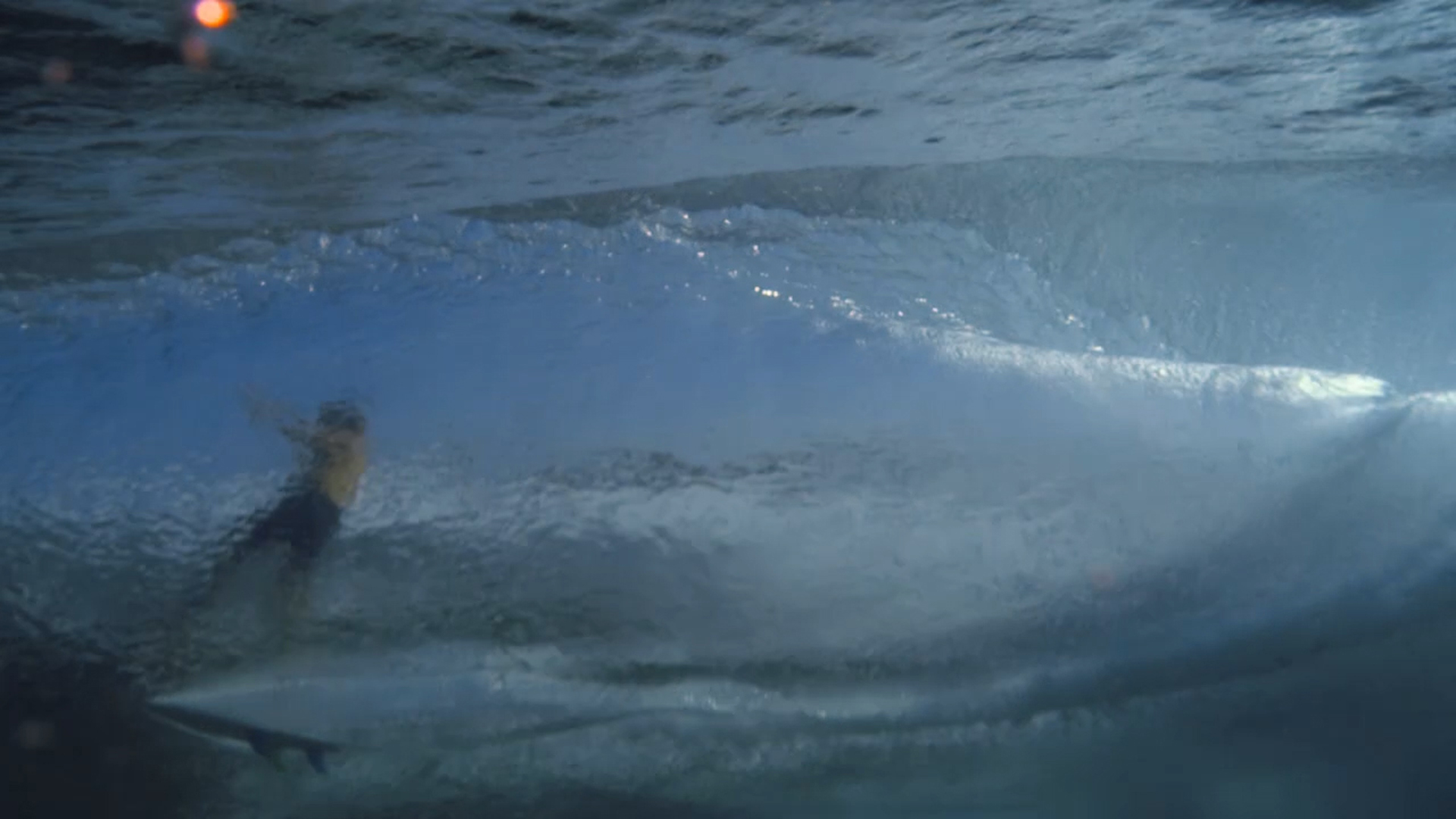 The title Self Discovery for Social Survival came from an old book that Chris happened to find. It was written for people who free-climb up mountains but, really, it was about a pathway to conquer fear. Both Chris and Keith felt like that encapsulated the spirit of the film: the way surfers constantly seek out these fleeting moments in nature where two forces are colliding with each other, embracing a moment where there’s a clear sense of energy dying and being born at the same time.

“We take shit so seriously, whether it’s in our personal lives or our jobs, that it feels like there’s so much riding on these really trivial things that we experience day-to-day,” he says.

“So when you’re able to sit in the ocean and just look out there, feeling the insignificance of yourself in that moment – all those things that you get so worked up about don’t really have that weight anymore.”

Find out more about Self Discovery for Social Survival or check out the soundtrack via Mexican Summer.

Linkedin
RELATED ARTICLES
OTHER ARTICLES
Mass crustacean die-offs in the North East have led a community of fishermen to take action to save their seas.
Activists and campaigners are fighting back against new laws that would seriously undermine the ability to take industrial action, calling it an attack on fundamental workers' rights.
A new law change is enabling Britain’s donor-conceived children to know the truth about their origins – but campaigners say the fertility industry must do more to protect people.
David 'Dee' Delgado’s photo project is about honouring and uplifting the city of his youth, and a world rapidly disappearing under the relentless onslaught of gentrification.
A group of aid workers face prison for helping to save people fleeing their homes at sea. If they are charged, it will have a chilling effect on humanitarian efforts.
After building his reputation covering the US civil rights movement in the 1960s, the photographer went on to produce some of the most enduring images of the past century.