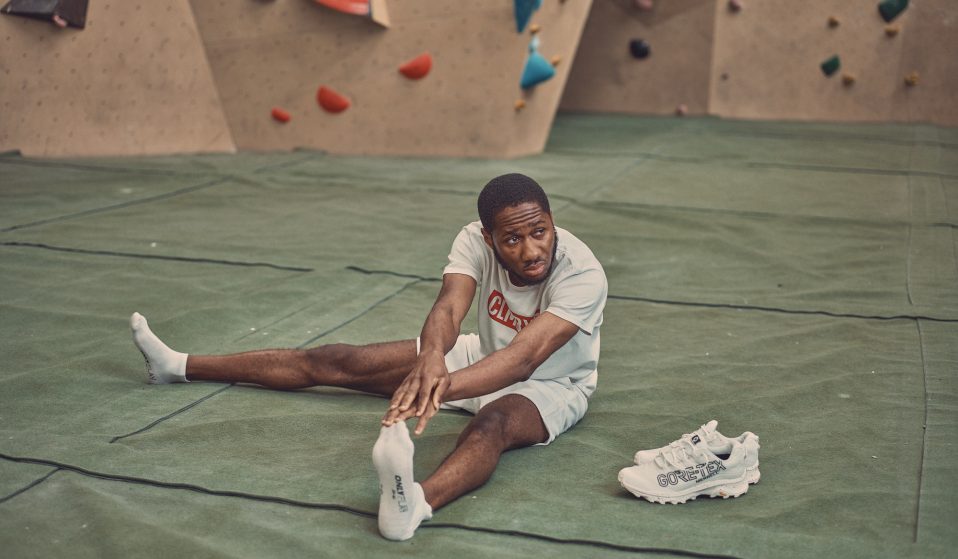 Timi Oladeji thought climbing was a sport done in remote, faraway places by people who didn’t look like him.

Timi Oladeji thought climbing was a sport done in remote, faraway places by people who didn’t look like him. But when a friend invited him to an indoor session, he got hooked, and now he wants to inspire others to make the same move

Back in 2019, if you’d asked Timi Oladeji what a typical climber looked like, he’d have struggled to answer. The sport wasn’t on his radar at all. “I’d probably have thought of a white person, middle class…” With a beard? “Yes,” he responds, laughing. “Conquering Everest or another big mountain. Or someone like [Alex Honnold] in the Free Solo movie.”

For Timi, a SEN teacher and portrait photographer, who’s chatting to me on Zoom in front of a wall of books, climbing was something done in remote, faraway places, by people who didn’t look like him. Not a sport you could do in a flat city like London, a place with no exposed rock, let alone mountains.

But that all changed three years ago, when a mutual friend invited him to join a session at Mile End Climbing Wall. He couldn’t believe this vivid indoor world of bright plastic handholds, angled plywood and other crag simulacra existed in the city. There weren’t many people of colour beyond their group climbing that day, but he found the atmosphere welcoming and inclusive, and took to it right away.

“Growing up, I’d always been active,” Timi, who is now 29, says. “I’d done gymnastics, breakdancing and played a lot of football. This was new in the sense that I’d never done it before and people from our background don’t generally do a lot of climbing. But in another sense, challenging myself wasn’t new; it felt natural.”

He was pleasantly surprised to find climbing skill wasn’t related to having huge biceps, despite the fact some of his friends were dedicated gym-goers. “They’re well-built, and I haven’t got the greatest upper body strength or height. But seeing different body types on the wall, from strong men to lean women, and then doing it myself for the first time, I realised it’s more about agility, balance and technique than strength or height. It’s about figuring out the best way for you to do it,” he says. 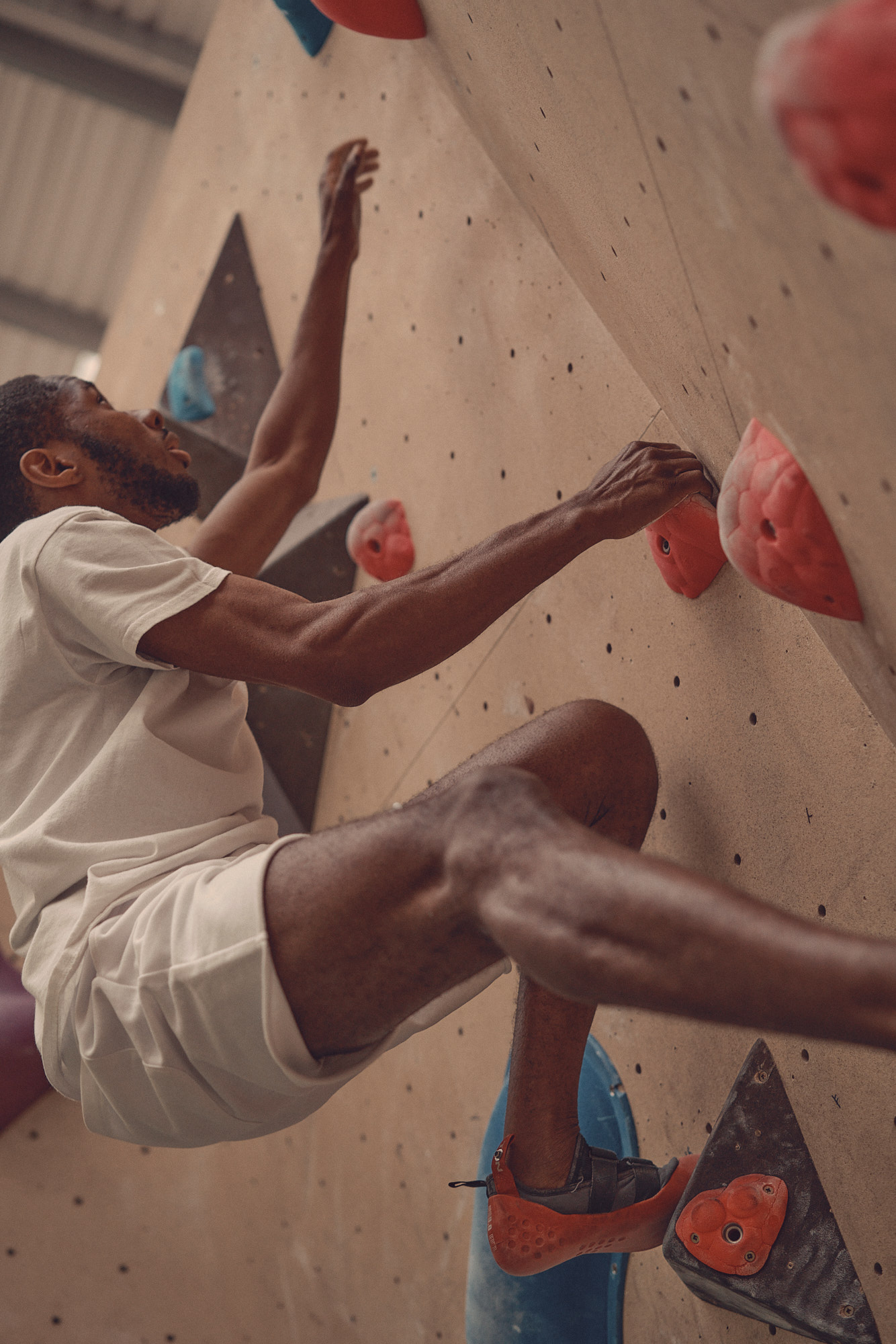 Timi, who is thoughtful and softly spoken, is drawn to the problem-solving nature of climbing. The challenge of trying to pick a route and get from A to B, and the stillness that process brings to his mind. “It’s relaxing and therapeutic in a sense,” he says. “Seeing the course and then trying to figure out how to get to the top. Or not being able to conquer it at the end and then learning from it, coming back the next week.”

Some walls take him weeks or even months to complete, but Timi enjoys that delayed gratification, a feeling he thinks is missing from fast-paced screen-based modern living. “It’s not simply about climbing the wall and getting that immediate reward, it’s about the long-term reward. Knowing if I did this next week, and used that hand hold, or tried the technique that worked for that climber, I can get higher and closer to the top,” he says.

He especially loves working on these problems with other climbers. “It’s a solo sport in one sense as it’s you and the wall and you have to get up it but it’s also communal. I really like that aspect of climbing, having someone by your side watching and supporting you,” he says. “Figuring out a puzzle with someone else, a person you might not meet in everyday life, that’s a really positive side to it.” 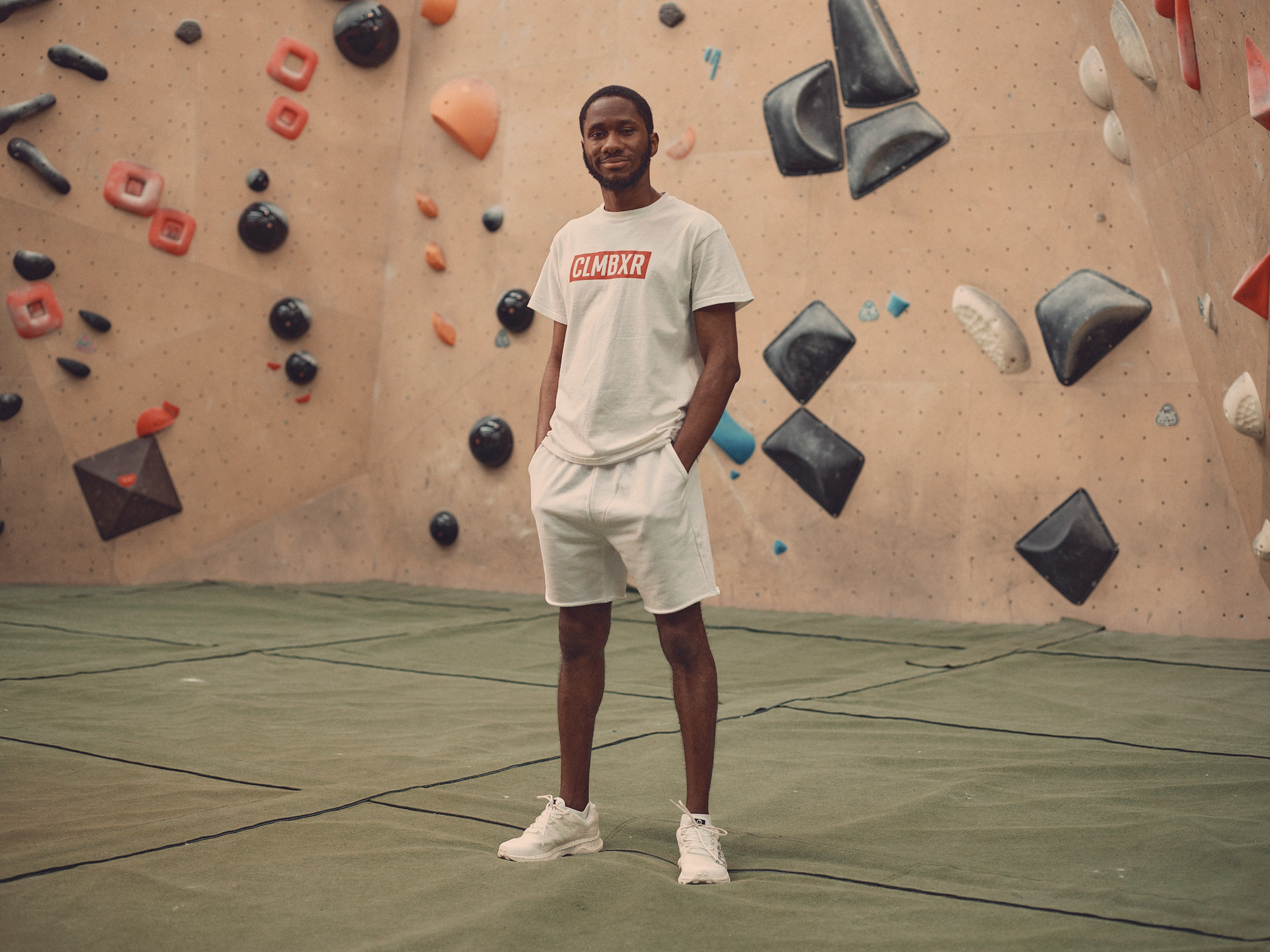 The original group that Timi joined at Mile End has since evolved into ClimbxR, a climbing community for people of colour, with over 100 members and an inspiring social media presence in an industry that has long been dominated by white faces. Headed up by Rotimi Odukoya, ClimbxR runs twice-weekly sessions at VauxEast in Kennington and Yonder in Walthamstow.

Timi tells me he isn’t someone who necessarily needs to see someone from his ethnic background doing a sport to feel welcome, though it helps. Most of all, he hopes ClimbxR will grow and encourage more people of colour to feel inspired to get involved in the sport.

“If it opens doors for others who look like me that would be incredible,” he says. Climbing is set to make its debut at the Olympics in Tokyo this summer, and Timi thinks this will also raise awareness of indoor climbing as something people in cities from all backgrounds, especially young people, can do. “Kids who never thought climbing was a thing, will watch the Olympics and think ‘That could be me’.” 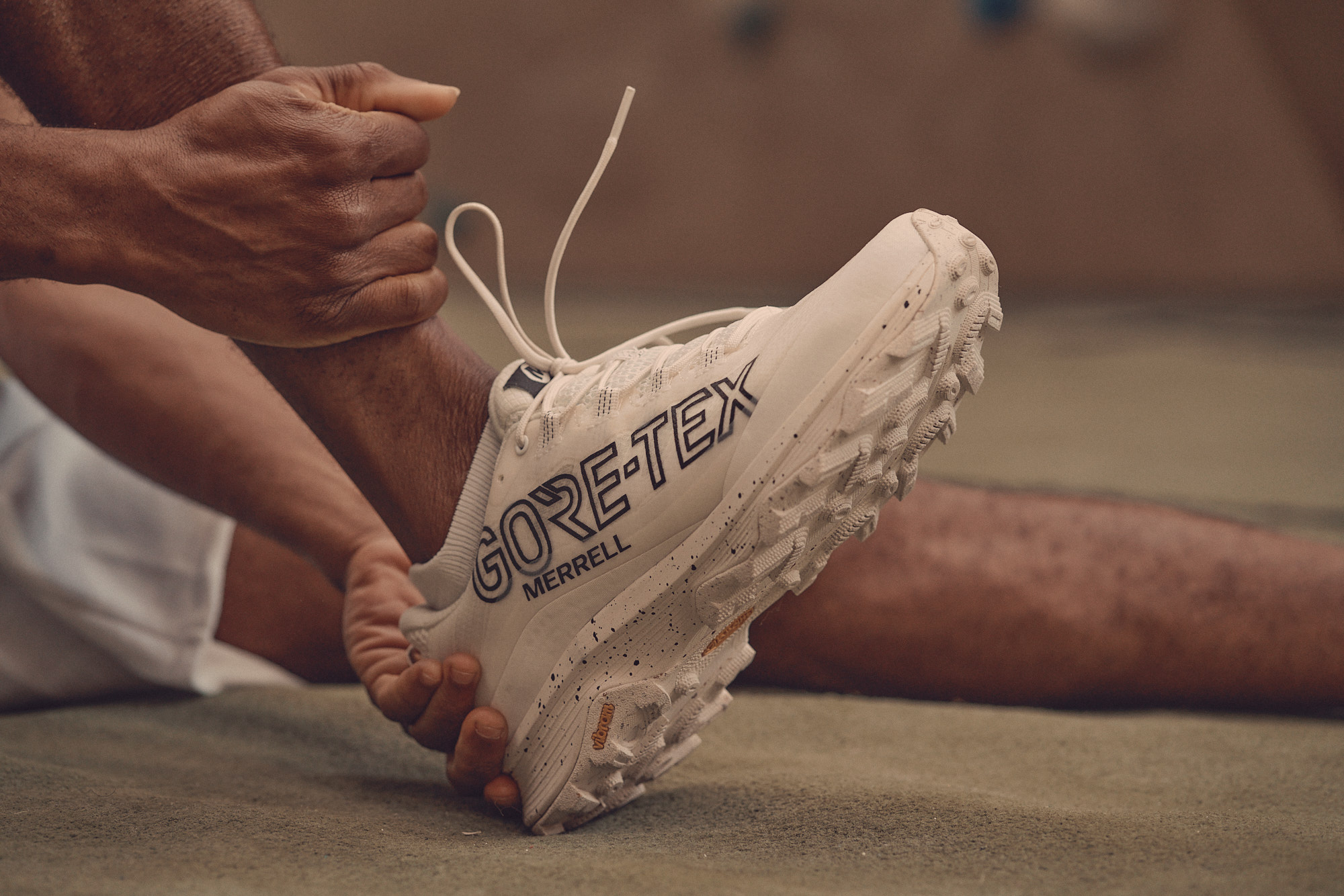 Being a part of ClimbxR keeps Timi motivated to climb regularly, even after full-on days at work,. He’s made a lot of positive friendships and even met his wife through the community.

Timi likes the fact that recreational climbing is non-gendered. “Seeing my wife climb, encouraging her when she’s on the wall and her encouraging me, nothing beats that really,” says Timi.

I ask if he has any ambitions to find his own Dawn Wall and take some of the skills he’s learned from indoors outside. He says he hasn’t tried actual rock climbing yet and feels a bit intimidated by the outdoors scene in the UK. “It looks rugged, like a proper challenge with expertise and particular training needed. But I would like to give it a go, especially now I know it’s there,” he says. 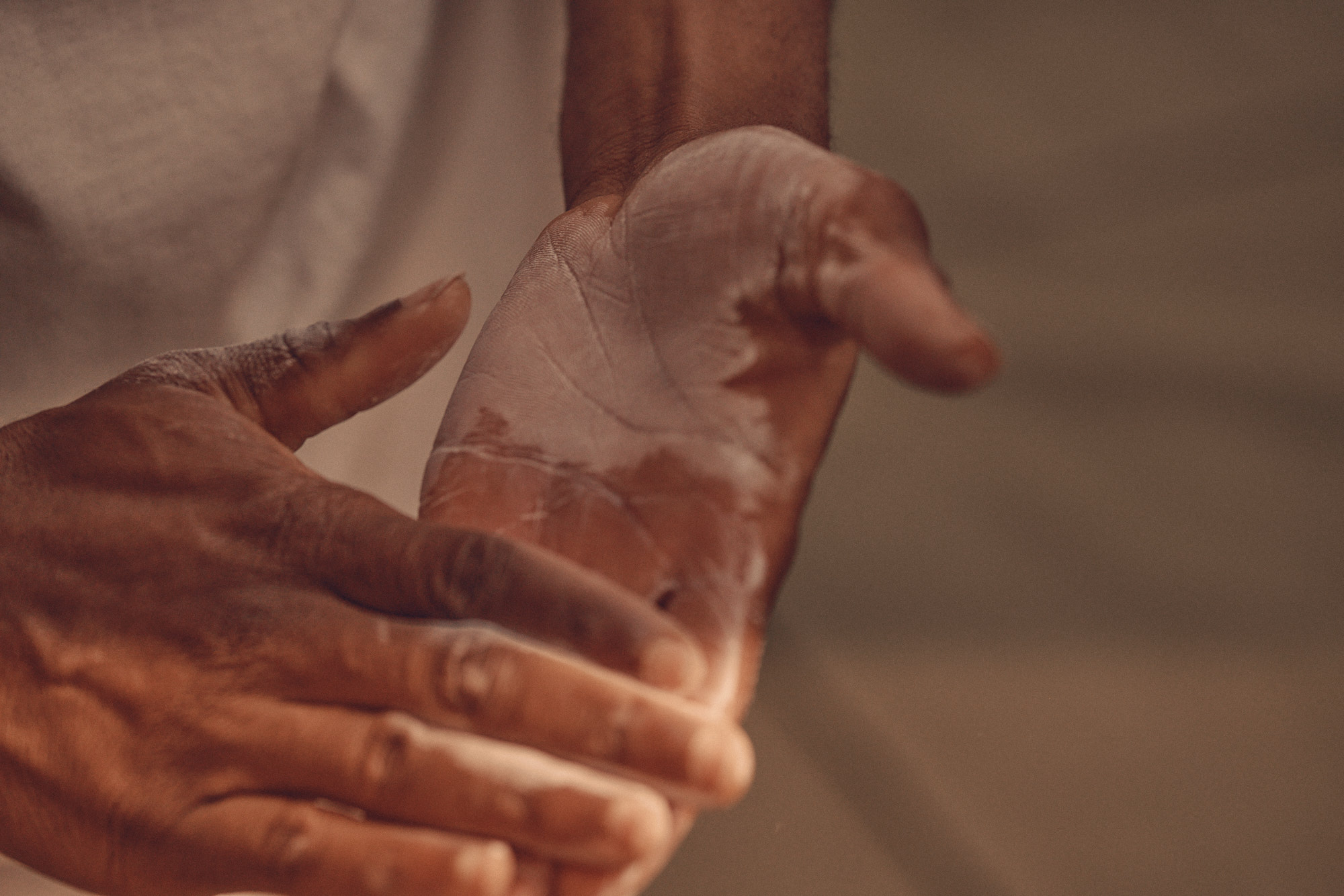 Timi wears the Moab Speed GTX 1TRL from the SS21 collection. The exclusive Moab Speed GTX 1TRL takes the innovations of the archival Moab and updates them for the ever-changing trail. Built on a Rock plate foundation with recycled laces, lining and footbed. The shoe is engineered with Gore-Tex® waterproofing, FloatPro® and a Vibram® EcoDura sole, a compound made from a minimum of 30% recycled material. Available in triple black and triple white colourways with bold branding details.

Linkedin
RELATED ARTICLES
OTHER ARTICLES
Photographer David Corio’s archive offers a glimpse inside a revolutionary era of music and nightlife.
The two-day long event returned to London this year, showcasing a spectacular parade, steel bands and Caribbean food.
Ahead of the release of their first collaborative album, the producer and rapper talk psychedelics and the state of UK hip hop.
A 37-year-old woman shares how her abortion led her to become a clinic worker, and the abuse she’s received in that role.
By turning a real-life crisis into daytime television fodder, TV bosses have once again shown themselves to be completely out of touch with audiences.
A group of young Palestinians have found temporary freedom in the act of parkour, reimagining wreckage and ruins as a series of high-octane playgrounds.