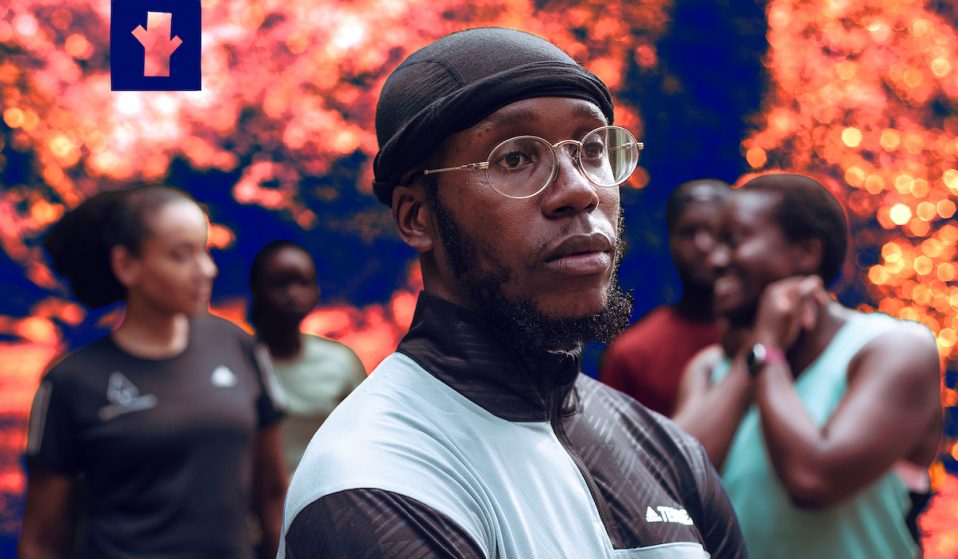 The campaigning charity are on a mission to increase inclusion, participation and representation of Black people in trail running.

The campaigning charity are on a mission to increase inclusion, participation and representation of Black people in trail running.

Growing up in the inner city has blessed me with so many advantages, opportunities and insights that have benefited my life. Navigating the world through the lens of an inner-city dweller has made it easier to adapt to other metropolitan areas around the world. However, for a lot of us who grew up in the urban environment, particularly people of colour, there has been a distinct lack of connection to nature, and an almost inherent fear of going into outdoor spaces. It’s unfortunate, and very limiting, that our life experiences have created this invisible barrier to exploring the great outdoors. Britain has an abundance of inspiring green space, forests, woodland, fields, rolling hills, mountains, lakes and much more. Sadly, many of these spaces have felt “off-limits” to people of colour. But as society continues to shift and evolve – particularly through the social impact of George Floyd’s death in 2020 – more and more organisations and communities are popping up and working to create positive, and long-lasting change.

Black Trail Runners, co-founded by Phil Young in 2020, is one such community. A safe space for people of colour, who enjoy trail running in the countryside, to unite and connect with one another. “We don’t realise that most of us, by design, have been forced into the inner city through legislation, through housing, through education and through the jobs that were available to your parents or grandparents,” the BTR co-founder says. “When you’re living in a racist society the thought of going into the countryside and having a walk down the beach, or in the forest, just becomes a non-option.”

“Over two or three generations, people of colour, in this country anyway, have lost an emotional connection to the outdoors,” he adds, describing how different it is in the Caribbean or Africa, where it’s a lot more com- mon for Black people to interact with nature.

The result of this ghettoisation of ethnic groups, combined with the spectre of racism, created a double header of fear and negative experiences, to the point where the notion of the countryside just not being for Black people became normalised. As a music writer, I have covered the lack of representation and diversity at festivals – not only on line-ups but also in the crowds that attend, especially weekend camping events. Something that arose during my research was that camping is a rare activity in the Black community, for numerous reasons. Similarly, it is largely accepted that a whole world of outdoor pursuits and sporting activities are for white people only; compounded by short-sighted and negligent advertising that, up until very recently, typically only featured white models.

This is where influential brands can really instigate change, like adidas’ Terrex department, for instance. As one of the world’s biggest sportswear brands, they were ahead of the curve, taking action to implement changes in their advertising to honour the diversity of their consumer base very early on. This has led to a significant partnership with Black Trail Runners and a collaboration with grime artist Che Lingo, a south-Londoner whose voice and perspective aligned with the values adidas has been cultivating. “I used to be a Cub Scout when I was younger, when I was like nine and 10. So that was my first connection with nature,” Lingo explains. “We’d build tents and sleep outside, but it wasn’t a glamping thing! It was tents in the middle of the forest.” 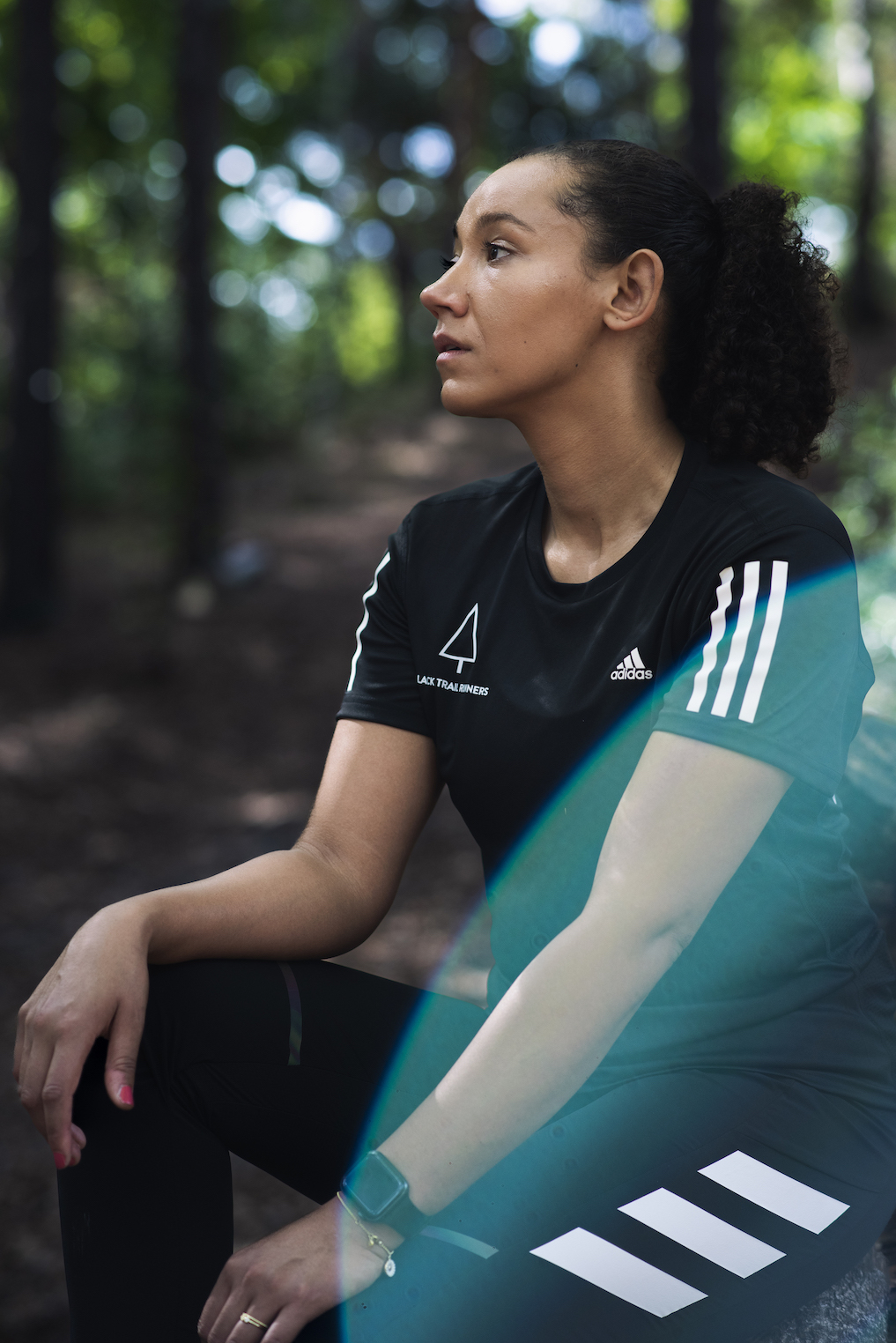 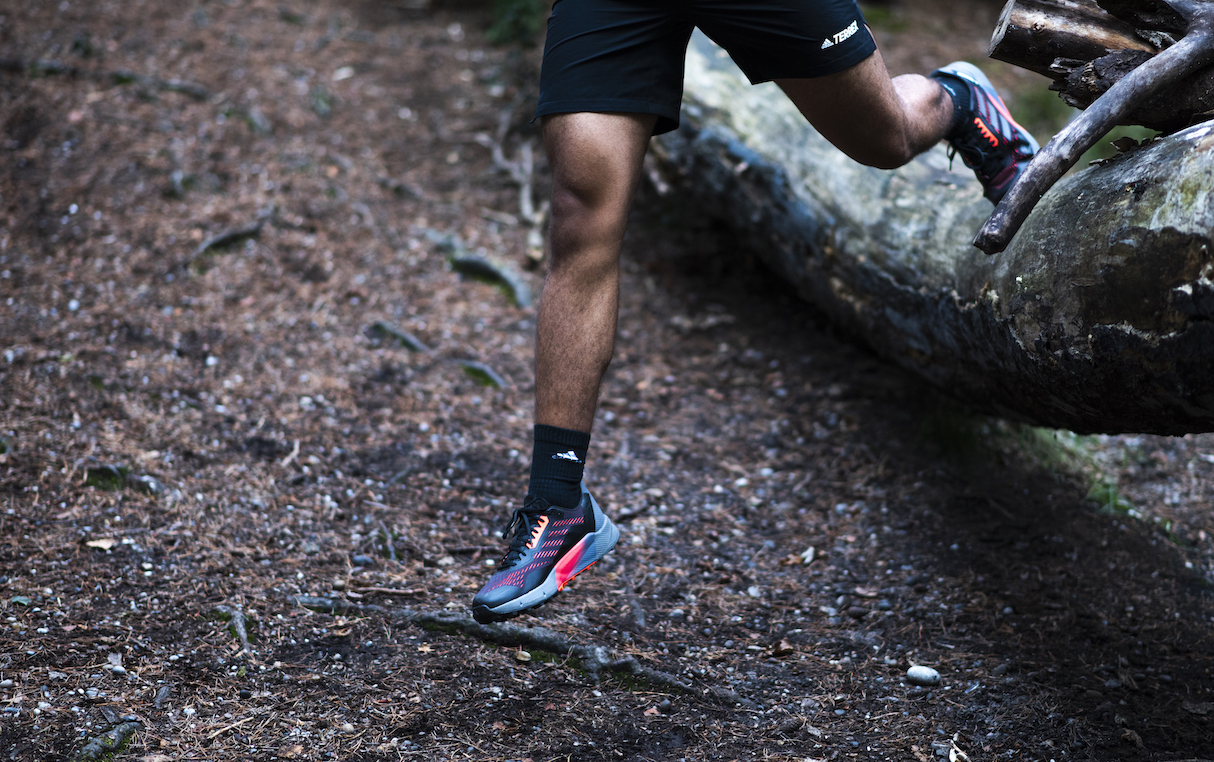 “We learned basic stuff like what plants might be poisonous, what berries you can eat. We learned about how certain things grow in certain seasons,” he adds. “Just loads of regular rudimentary nature stuff, mostly rooted in survival.”

Che recorded a track to address the issues around exploring the outdoors and social limitations on people of colour, with an accompanying video that depicts several young runners going out to unite in woodland terrain. Full of positivity, both the track and the video showcase the progressive power of Black Trail Runners, and how such communities can impact society as a whole. “The lyrics are inspired by travel and connection to travel via feet, as well as a social look at the perception of Black people outside the city,” he explains. “In tandem with that, I attached a hook that covers both of those things, from differ- ent perspectives. So, one is about running up the money, in its insinuation, and then the other side is about physically running up the hill.” 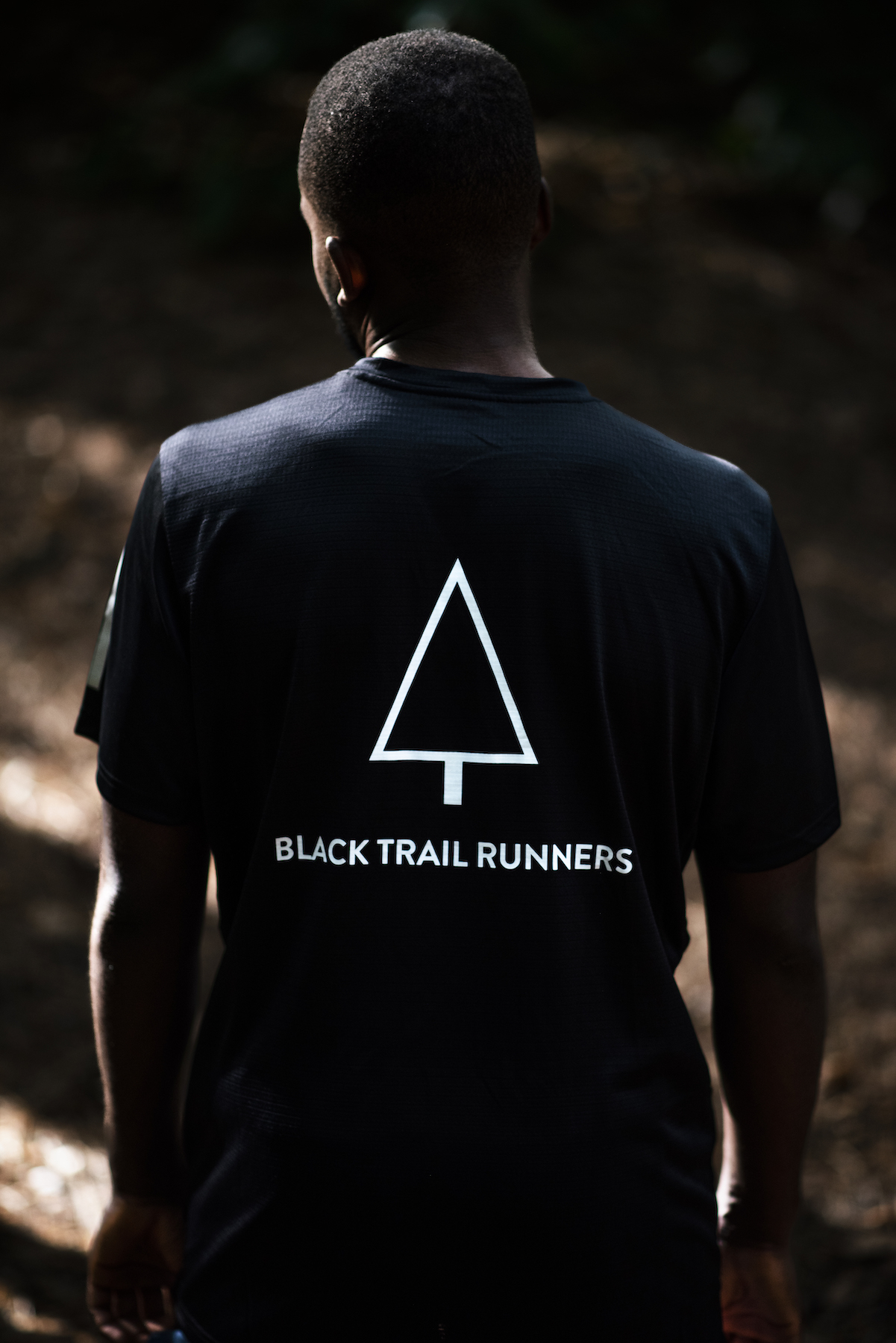 “There are a lot of people who just don’t understand anything beyond stereotypes, or beyond very linear ways of thinking,” the musician adds. “That’s why a lot of people I guess, can feign ignorance when it comes to those things.”

“In this instance, it’s about getting a younger crew doing it and saying that it’s okay,” comments Phil, speaking about the drive behind the project. “And to say to the rest of the trail running community, ‘Look, we’re here. Whether you like it or not, we’re here and we’re going to do things our way.’ It is a little bit colourful, and it is a bit loud. But you know, deal with it. It’s just our version.”

With communities like Black Trail Runners, the aim goes beyond simply making space for people of colour to enjoy the great outdoors. It’s about reconnecting with nature and removing that fear and anxiety around what is our essence, and our natural habitat. “I have a great respect for the outdoors, as a space to traverse. I watch a lot of Anime fantasy type stuff and they often use nature as a catalyst for a lot of energies and powers like Goku spirit, for example from Dragon Ball Z,” Che explains. “So, from an imaginative point all the way through to a very practical and real point in my life, I’ve always had a respect for nature and the outdoors.” 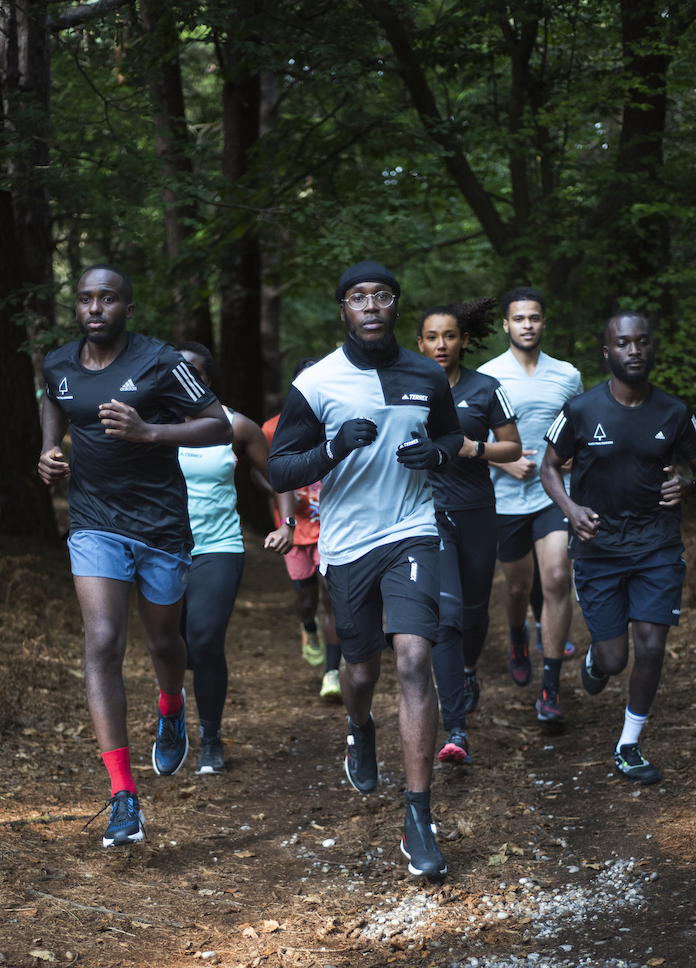 “Regardless of what you believe in, nature has to play a part in it. That [concept] makes it easy for there to be – no pun intended – a common ground for everyone to base their existence in the physical world,” Che adds.

It’s this deeper appreciation and connection with nature that will, ultimately, provide the antidote to many of society’s ills. Reminding us of our place in the world, taking us back to our roots and opening up that space within us that thrives on the invigorating power of the natural environment. “When you step out into that expanse, or into that open space, you’re experiencing God’s work,” says the grime artist. “The more you believe that to be the truth, the more at peace you’ll feel, because there’s a weird thing that nature will do to you, when you step out into it”. Simply being dwarfed by the vast expanse of our natural world can be enough to create subtle, but poignant shift’s in a person’s consciousness to the point where they will behave in a more positive manner. Numerous studies around the world have demonstrated that being in nature can reduce stress, enhance moods, increase creativity and even boost a person’s willingness to be kind and generous.

For those who have become limited in their mindset, trapped in the urban environment and trapped by the “urban” label, communities that offer a bridge into the outdoors are vital. With their blossoming collaboration, Black Trail Runners and adidas Terrex offer that route into reconnecting with nature, and, hopefully, inspiring young people of colour across the nation to get out there and enjoy its wonder.

“People don’t listen to the government. They’re sceptical about the education that we get, there’s declining faith in religion and listening to the Church. So where do people get their information from?,” asks Phil. “A lot of them get their information and their values from brands. So for brands such as adidas, one of the biggest sportswear brands on the planet, if they’re saying, “Okay, we’re on this, and we’re behind it”, then maybe they can make a difference where other people are not able to”.

Linkedin
OTHER ARTICLES
Recent research is highlighting the drug’s enormous potential for treating substance abuse.
Ireland’s national sports are modernising. At the forefront of this movement is Na Gaeil Aeracha, the country’s first ever queer GAA club.
A campaign seeking to prevent future injustices where there is state involvement is gaining momentum, with Labour recently pledging its support.
Meg Handler’s photos capture diverse groups of New Yorkers coming together for the collective cause of civil rights.
A new documentary tells the story of an unassuming cul-de-sac of 13 timber framed houses built by Fusions Jameen – London's first Black housing co-op.
Photographer Jeffrey Silverthorne always treated his subjects – often those living on the margins of society – with empathy and respect.