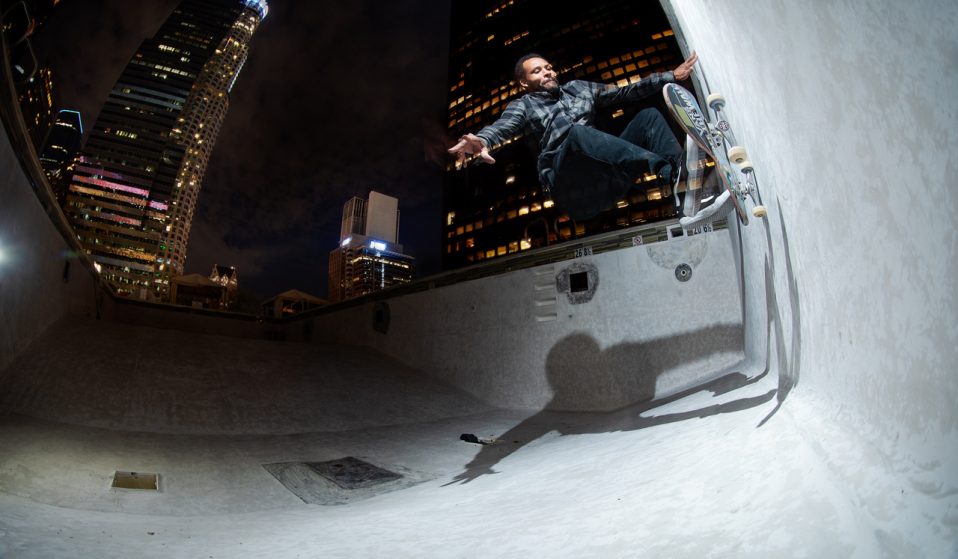 The street-skating pioneer talks life, legacy and why, after all these years, he still views his monumental career as a case of ’right time, right place’.

The street-skating pioneer talks life, legacy and why, after all these years, he still views his monumental career as a case of ’right time, right place’.

The gazelle-like dance of Ray Barbee as he plays atop his skateboard in the 1989 Powell Peralta flick Ban This. That image will, for people of a certain age who gave up much of their lives to this seemingly futile pursuit, remain burnt in our memories.

It was the second time I had seen video footage of Barbee – and by video I mean VHS tape. The first was in the previous year’s Powell offering, titled Public Domain. But the ’89 film was a proper ‘section’ – a full three minutes and 19 seconds of pure joy; a display of carefree teenage freedom that only skateboarding can offer, and flatland tricks the likes of which the UK had never before witnessed.

These were the days of monthly mags, bi-annual videos and trips to the South Bank to see and show what was possible on your board. There were no Instagram clips, no YouTube tutorials, no Facebook groups, no internet: just magnetic tape pushed into the front loader and rewound over and over until it became stretched and the image would glitch. As a teenager I was transfixed, whisked away to smooth concrete and endless no-comply variations. But the clincher for me was that he was Black. A Black kid in a Powell video skating with fluid ease – the kind that poked fun at the patience and tenacity it takes to master our chosen cruel mistress.

Barbee seems a reluctant legend. But there is no doubt that he sits firmly in the legend category. Now in his 50s he’s still skating hard, with a pro-model on Mark Gonzales’ board brand ‘Krooked’ and a long-term relationship with Vans. I wonder what he thinks when another random, middle-aged man openly expresses his fandom. He’s undoubtedly recounted his history hundreds, if not thousands of times. Yet, throughout our conversation on Zoom, his is one of pure stoke and humility. “I feel blessed to talk to you,” he says, with that signature grin that has made him so likeable. In truth he seems genuine about it: he’s attentive, focused and when we talk skating he noticeably energises. 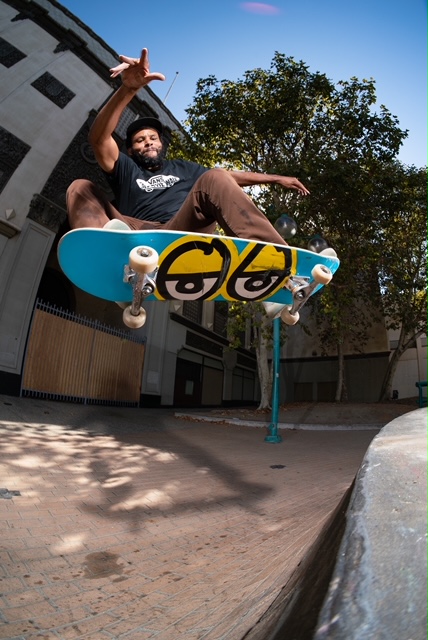 Ray Barbee was one of the originators of street skating, although I discover – to my surprise – he used to skate vert (vertical ramp). “We started skating a quarter pipe, then got hold of another to make a half pipe in a friend’s yard,” he remembers. The 5ft-high half pipe then got built into a 10ft one at the behest of  the older skaters. A broken wrist followed, which got Barbee banned from skating the ramp for a while by his parents. So in order to get his dose of fun, he took to the streets. “Street skating was much more exciting,” he says. “There wasn’t that list of tricks we had to tick off. There was an ‘ollie’ and a ‘kickflip’ and that was pretty much it. The rest we just kinda made up.”

As the conversation progresses, he casually throws in the names of his friends – Tommy Guerrero, Natas Kaupas, Jim Thiebaud , Julien Stranger and Mickey Reyes, all integral figures in the creation of street skating. If the hip-hop duos EPMD and Gang Starr defined their musical era with creativity, flow and innovation, Barbee and his contemporaries did the same for skateboarding. In many ways, music has been as important as skating in his life. “Skateboarding offered me the opportunity to get into music,” he says. “A lot of the people I skated with played in bands, they had guitars and they were playing music – it gave me access.”

Skating was born on the West Coast of America and has traditionally been taken up by a majority white community. There have been notable exceptions of course – Steve Steadham, Chuck Treece and Larry Bertlemann, amongst others, all held their own throughout the ’70s and early ’80s. But the coverage of Black skaters has, until recently, been sparse. For years, the industry seemed reluctant to feature all but the most innovative and powerful riders. 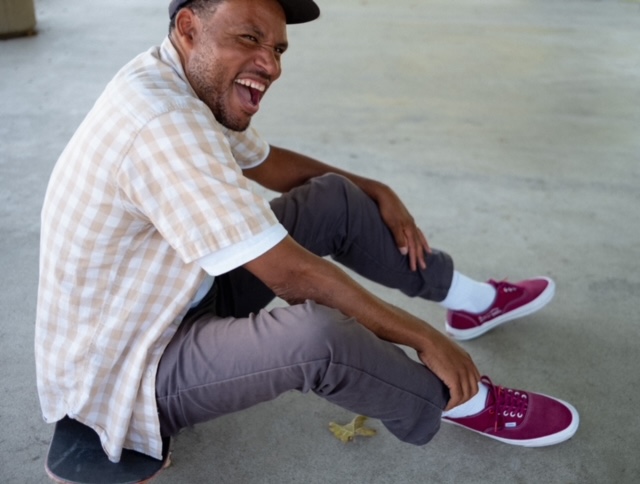 As a Black London skater I’ve never felt too much stigma on the streets over the years. But I’m interested how it played out in America, where the racial divide appears stark. “I’ve never had problems from skateboarders,” says Barbee. “The push-back comes from our own culture who question: ‘Why are you trying to be white?’”

For Barbee, this is an issue of socio-economics. “To surf you need to live by the water and surfboards are expensive. If you skated back then you skated ramps and generally you needed to own the property [the ramp was] built on – it’s unlikely you can build one on a rented property. Then you have to get the wood, or steal it. If you don’t own the ramp you have to know a guy who knows the guy who owns the ramp. There are quite literally gatekeepers to the culture.”

He tells me of the times they would drive up to skate someone’s ramp and end up sitting in the truck by himself and not skating as no one knew his face. Eventually, he gravitated toward what he could do, which led him to street skating. “All you needed was concrete,” Barbee notes.

Ray Barbee may not be the sole reason that skaters of colour such as Zion Wright, Nyjah Huston, Ishod Wair, Kyron Davis and Jordan Thackeray are able to get coverage and sponsorship deals today. But he undoubtedly played a huge part in making it possible. He clearly understands the influence he wields and continues to hold over people – regardless of the colour of their skin. That said, he seems to avoid openly acknowledging it. I wonder if it’s the years of interviews and bar chats that make him savvy to the conversation. Perhaps it’s that I’m English and he knows we don’t take well to boasting. Maybe it’s just that the rumours are true: that he really is the guy in the room having the most fun. There is an infectiousness to the Barbee joy, he is constantly in the now, appreciative of the success that has come his way over the years. He answers my thoughts in his casual Californian lilt before I’m able to even pose the question. “Man, what a gift, I feel so grateful in being able to have had some influence in other people having fun – just by having fun myself.”

He realised years ago, he tells me, that his life had given him the ability to pursue the things he loves most: travel, friendships, music, photography and, of course, skateboarding – which excites him as much today as it did 35 years ago.

Photography and skateboarding have always been sweet lovers. It’s doubtful that any other sporting culture has been so well documented over the years, helping to create styles and trends and even influencing the craft of the format itself along the way. The role of the photographer has been integral to the growth and authenticity of skating. “It allows you to see how you look when you skate,” says Barbee.

Given he has spent much of his life constantly surrounded by photographers, it should come as little surprise that Barbee has gravitated towards the world of documentation. The fruits afforded to Ray through his illustrious career have been bountiful – a recent partnership with Leica (and Vans) being the most recent example. It comes in the form of the ‘Vault’ signature capsule collection and checkerboard compact camera called the D-Lux 7.

“When Leica are asking to work with you, you can’t ignore that. For me, it’s up there with when Stacy Peralta asked me if I wanted to ride for Powell. The fact that they weren’t embarrassed to show my work alongside heavy-hitter photographers was really encouraging”

The camera is yet another tool, alongside the guitar and skateboard that make up the trade of Ray Barbee – all them feeding into each other to produce the whole. “Hey man, it’s ridiculous and I’m still waiting to wake-up,” he says through a smile of stoke. “I’m just a skateboarder who was lucky enough to be there from the start. It’s the foundation and influence of everything I do.”

The Vault collection by Vans and Leica x Ray Barbee is available now.

Linkedin
RELATED ARTICLES
OTHER ARTICLES
Photographer Becky Tyrell went down to the fading banger and stock raceway to meet a community desperate to keep it alive.
Photographer Sean Maung reflects on documenting a small town in Pennsylvania afflicted by high levels of unemployment, poverty, violence, crime, and addiction.
The action took place in response to the 200 asylum-seeking children who were placed in hotels run by the Home Office who have gone missing.
As she gears up for the release of her first book, the 24-year-old climate activist talks standing up to authority and building a more inclusive movement.
A new exhibitions brings together the work of photographers who documented the deep unrest of these pivotal decades.
Tristan O’Neill’s shots of dancers caught in moments of reverie at the height of rave’s golden age are a testament to the UK’s legendary club culture.