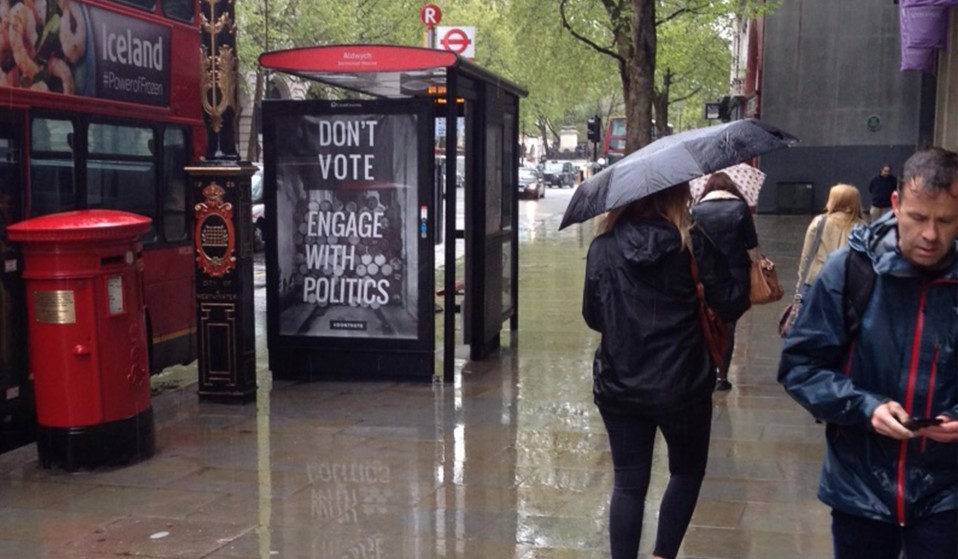 A Huck exclusive interview with the Special Patrol Group, the activists behind the ‘Bullshit Jobs’ campaign, on their latest Don’t Vote action.

A Huck exclusive interview with the Special Patrol Group, the activists behind the ‘Bullshit Jobs’ campaign, on their latest Don’t Vote action.

This afternoon a communique arrived from the Special Patrol Group, a radical offshoot of STRIKE! Magazine. It read:

Rupert Murdoch has more influence than the entire UK electorate. All of the candidates are idiots: a truly democratic system would have an option to vote for none of them. DON’T VOTE: spoil your ballot, engage with politics, take to the streets!

You may remember these subversive agitators who informed tube passengers that their jobs were bullshit on the first day back at work this year and subverted advertising billboards to announce that the Metropolitan Police are ‘still really racist’ after Ferguson went up in flames.

Just days before the UK’s general election, the SPG have launched another timely action.

As commuters trudge home, their senses dulled by agonising hedge fund-bankrolled party political broadcasts and inane campaign updates from the mainstream media, they will be confronted with billboards across London that shout: Don’t Vote.

Instead, the SPG are calling on Londoners to engage with politics through alternative means, by spoiling their ballots or taking to the streets. As with every action it’s backed up with some solid philosophy, which you can read here – including this gem from Audre Lorde: “The master’s tools will never dismantle the master’s house.”

Huck caught up with a member of the Special Patrol Group to talk about the Don’t Vote action. The shady figure raised the visor on their riot helmet to give this exclusive interview.

Wait a second, I thought voting was being politically engaged?
We think coming out once every four or five years to put a mark in a box is apathetic. Spoil your ballot: a vote for none of the above, if you will, a vote against the system. Engage in politics: find a campaign or issue that matters to you. Take to the streets: make a banner, create a zine, build a movement. Do something! Lots of amazing people already do.

Why are you encouraging people to spoil their ballots? Why not just stay at home?
Because we have an unfair system, not-voting gets counted as ‘ignore me’. It seems obvious to us that a properly democratic system would include an option to vote for none of the above; perhaps if it did, we wouldn’t be stuck with such woeful ‘representatives’. Until we can change the system, spoiling your ballot is the only option that shows that you’re unhappy with it – nobody should endorse it by voting for it. 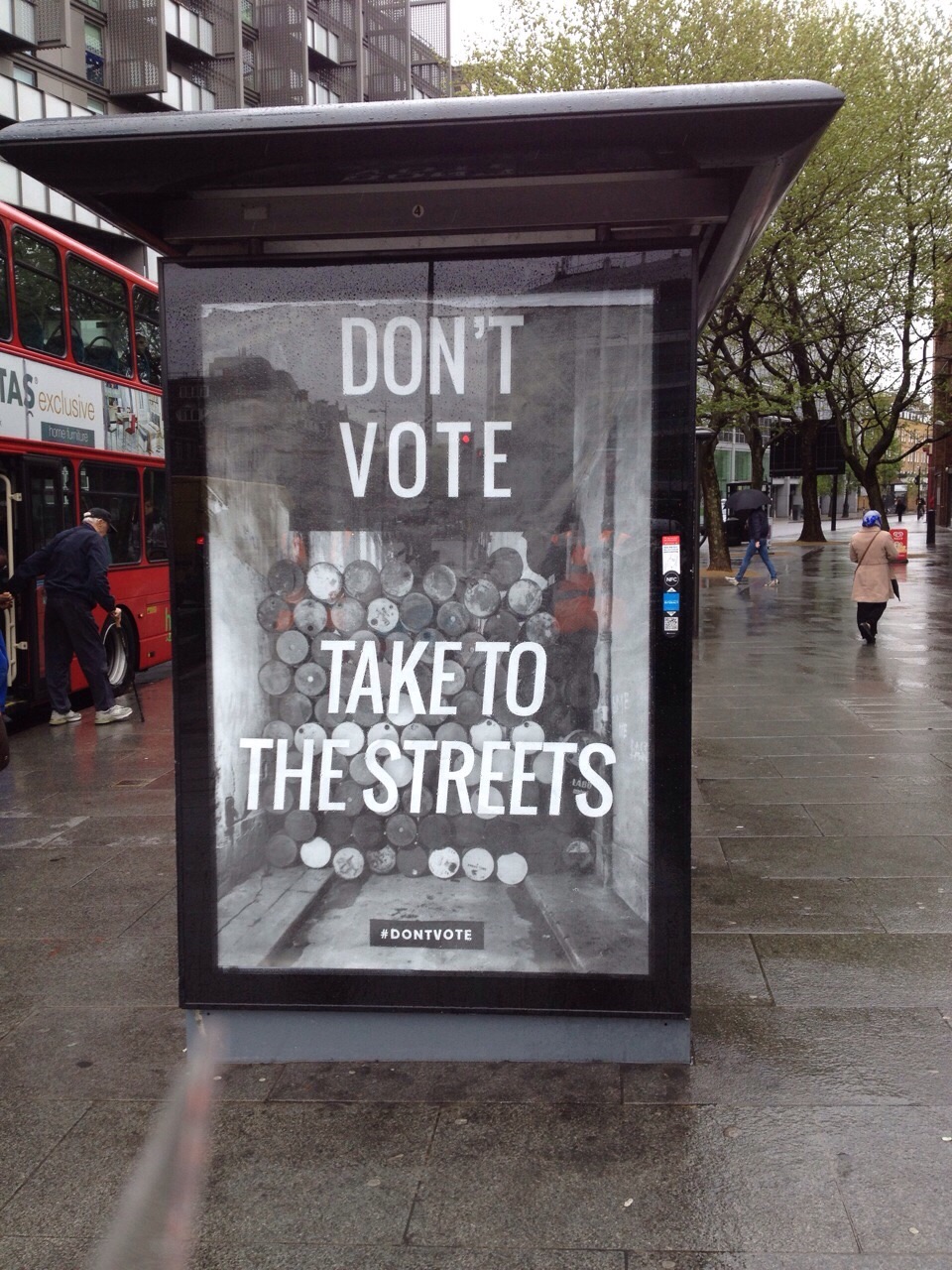 What’s your beef with Rupert Murdoch? What’s an ageing Australian who can’t even vote in the election got to do with all this?
It’s not about the individual ageing Australian, although he is obviously a very unpleasant individual. It’s about wealthy individuals and interest groups having more influence, significantly more leverage than, not only individual voters, but the entire electorate.

If you took the money out of politics, placed limits on spending etc., the people with the best ideas rather than the most money would win. But politicians have done the opposite of that – they’ve made themselves available to the highest bidder. Bribery and corruption in our system is euphemistically referred to as ‘lobbying’, as though ordinary people have the same clout as multinational corporations.

One of your posters shouts ‘Take to the streets?’ When? Where?
Always and everywhere until the change you want to see has happened. But it’s not supposed to be taken so literally: it’s about a mindset. It’s about realising that the only thing that has ever created change is collective action – and that usually, literally, happens in the streets. The beauty is in the streets – not the ballot box.

What really gets your goat about outdoor advertising? What would an SPG future without advertising look like?
Outdoor advertising is one of the few things less democratic than parliamentary politics. If you buy a newspaper or switch on the television, you can turn the page or change the channel – outside nobody has any choice but to be bombarded with messages that are trying to convince you to give up your hard earned, often by telling you you’re too fat, too ugly, or otherwise incomplete. The visual realm belongs to everyone, so nobody should be able to buy it.

And other places have already recognised this and banned outdoor advertising completely – notably Grenoble and Sao Paulo. It’s interesting that both Westminster and the City of London seem to have already passed by-laws banning outdoor advertising – presumably because rich people don’t like having their visual landscape sullied with shite either. The difference is, they’ve got the power to do something about it, and we don’t.

The Special Patrol Group is an offshoot of STRIKE! Magazine. Find out more about their Don’t Vote action here.

Linkedin
RELATED ARTICLES
OTHER ARTICLES
Rogue landlords are exploiting young and inexperienced renters and leaving them in mental and financial turmoil, reports Niall Hignett.
By turning a real-life crisis into daytime television fodder, TV bosses have once again shown themselves to be completely out of touch with audiences.
Yesterday thousands gathered outside Buckingham Palace after news of the Queen’s death broke.
Thousands attended the annual event this year to wheelie through the city and call for ‘knives down, bikes up’.
Rhiannon Adam spent three months capturing an ageing society wracked by division, isolation, and the aftermath of scandal.
Photographer David Corio’s archive offers a glimpse inside a revolutionary era of music and nightlife.