News & Politics / Activism / What does the future of resistance look like? 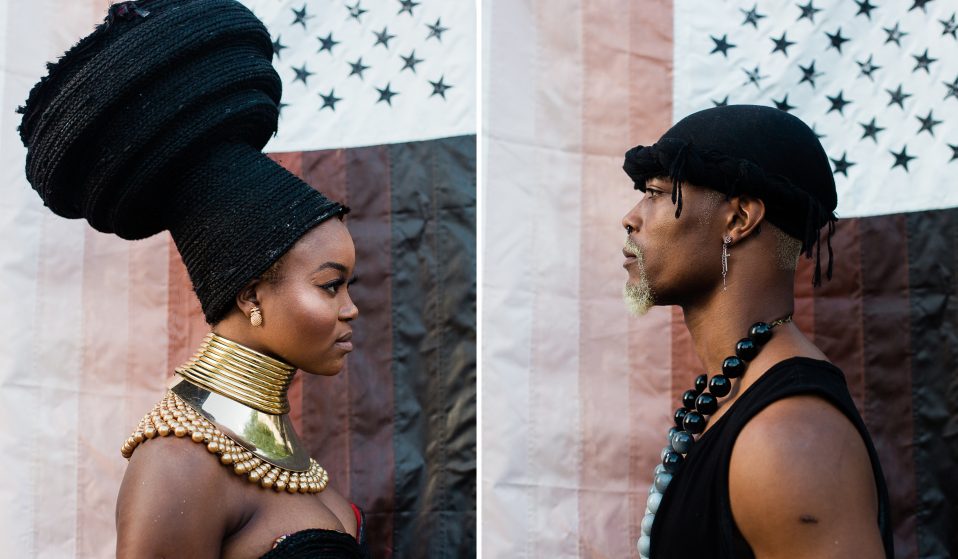 We asked people at this year’s Afropunk Brooklyn about their vision for activism, the future of civil rights and the fight for equality in Trump’s America.

We asked people at this year’s Afropunk Brooklyn about their vision for activism, the future of civil rights and the fight for equality in Trump’s America.

Afropunk is a music festival designed by and for black people.

It is a space that encourages free expression, creative exploration and remains one of the few safe havens for black people and oppressed communities – regardless of race, religion, and gender and sexual orientation – across the world. On top of that, it’s also home to some of the flyest black fashion of the moment.

The event is a reclamation of space sprouting once a year in locations across the globe: participating cities include London, Paris, New York, Atlanta and Johannesburg.

This year, we spoke to people at Afropunk Brooklyn, about what their vision for the future of a civil rights and resistance looks like for them. 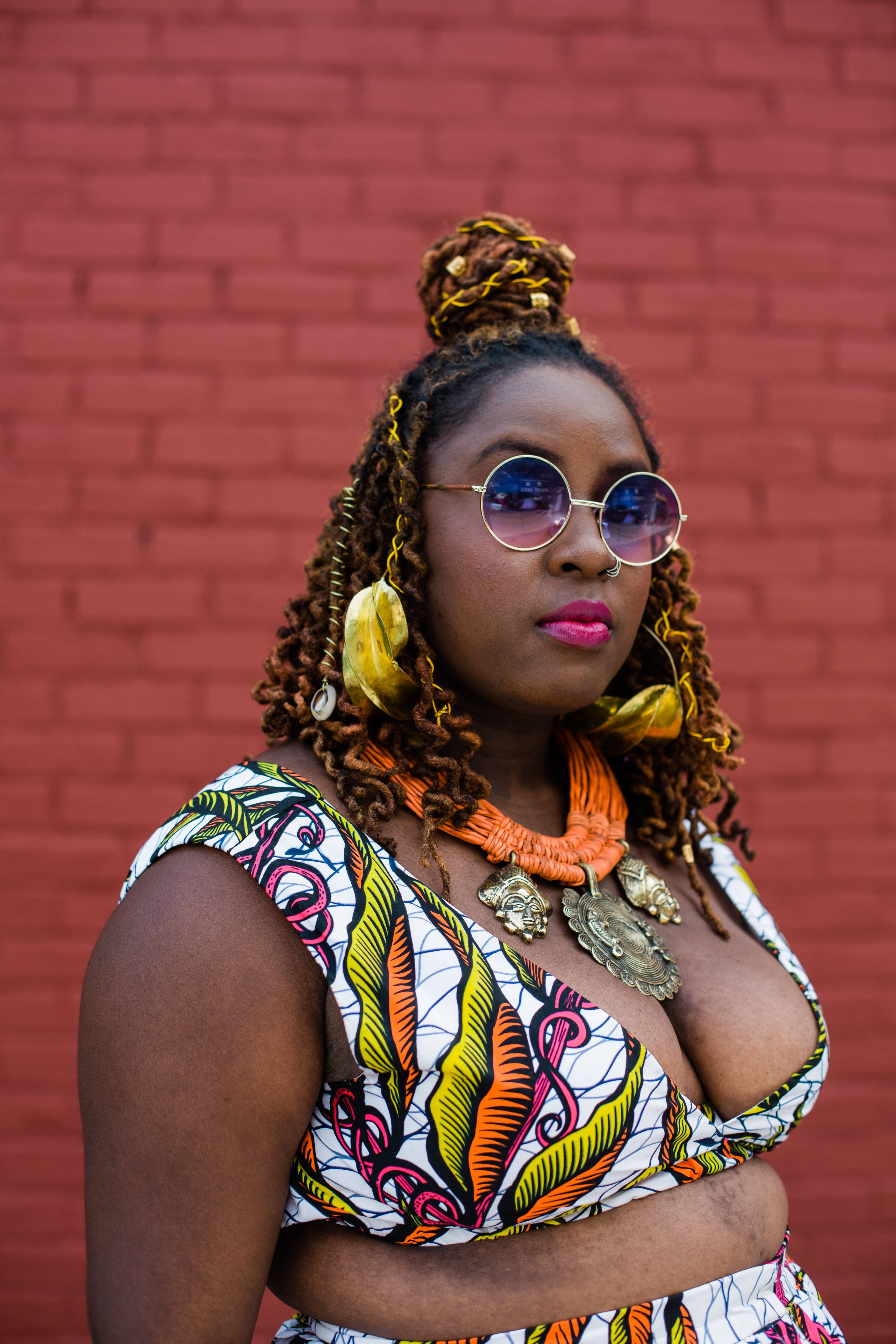 “So I’m from Baltimore. I’ve been asked so many times [since the] anniversary of the Freddie Gray moment: ‘What we do we feel like the resistance is gonna be?” I think the story is the same in so many different places. I think that the resistance is always constant. It’s steady. It’s a smouldering revolution, because people are becoming more conscious and constantly sharing stories of resilience. As long as injustice exists, then the resilience and resistance will exist as well –  until we see what justice can really look like for people of colour in America.

I think that black folks and people of colour want the same thing that everybody wants. We want the freedom to exist without being under an oppressive force. We want our material conditions to be such that we can thrive. We want to be able to be educated and fed and have families that are not being victims of police brutality. We want the same things that everybody wants. To be able to live freely. Until we see a fair America for everybody, situations like that are going to keep happening.” 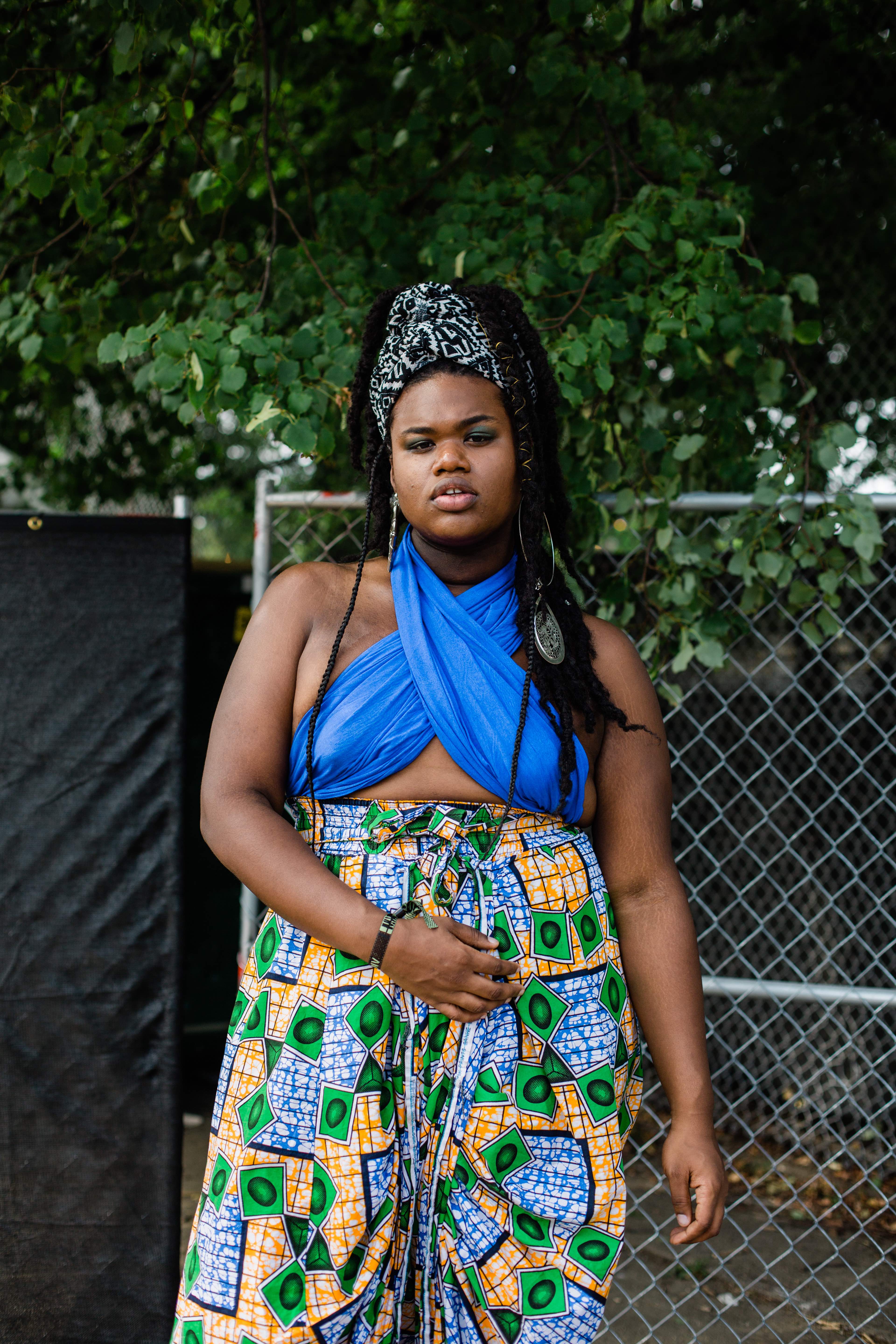 “[This] only makes me want to be out and proud more. I’m black, I’m trans, I’m a woman. I feel like that is my form of resistance: just existing. I think we are policed so much for being who we are, especially as people of colour, especially as queer people. So literally walking the streets, not hiding, not trying to assimilate to a very structured cookie cutter culture, being proud, being out and being the most flamboyant you can be, that’s my form of resistance. 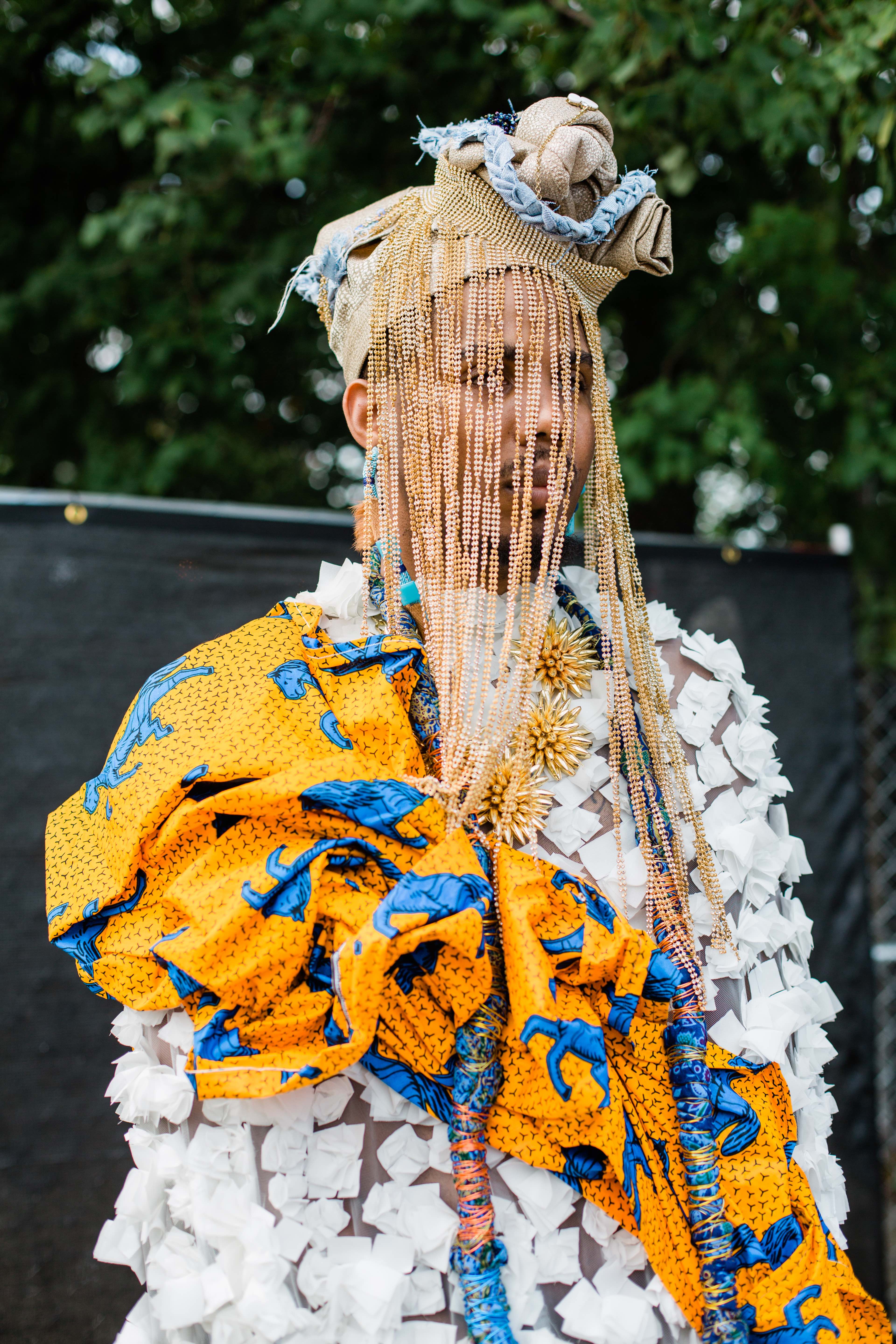 “I see that we have an increase in violence against all people of colour in this country. I see an uptick, that’s a statistical fact. Our voices are getting louder, our movements are getting bigger – but we will have work to do. It means we have a lot of barriers to break down, a lot of prejudices to dismantle, a lot of marginalisation to end. There is still a lot of work to do in this country by having the conversations, by having the dialogue, by empowering people to speak up for themselves, by being aware of systems that are in place to marginalise them and keep them oppressed.

Spaces like AfroPunk are extremely important because they provide a space of liberation, a space of movement, a space of communion for revolutionaries, for creatives, for people who are pushing the boundaries who are having the conversations and who are pushing culture forward.” 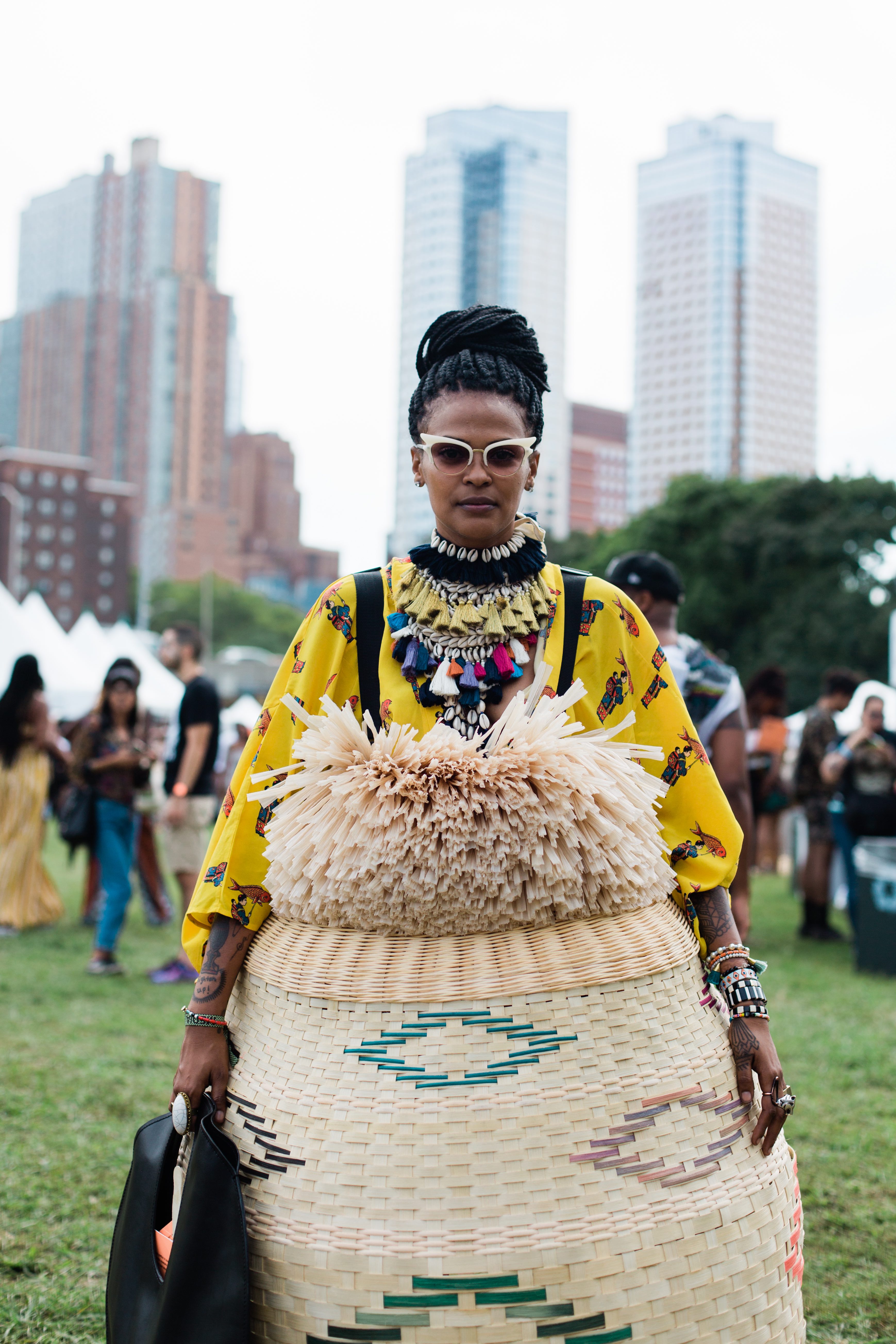 “The resistance is still important, it will be until the end of time. We don’t live in a post-racial society. Showing that black is beautiful and that we are a united front is always going to be important. You can be vocal, but you also have to do what you need to do to make sure that you create safe spaces for brown and black folks and that’s what this is about.

I hope to see a space where black folks, queer folks, trans folks where people can be who they are, and that’s okay. Where we can walk around and we don’t have to create safe spaces necessarily and that any space we go into is a space that we can take up space.” 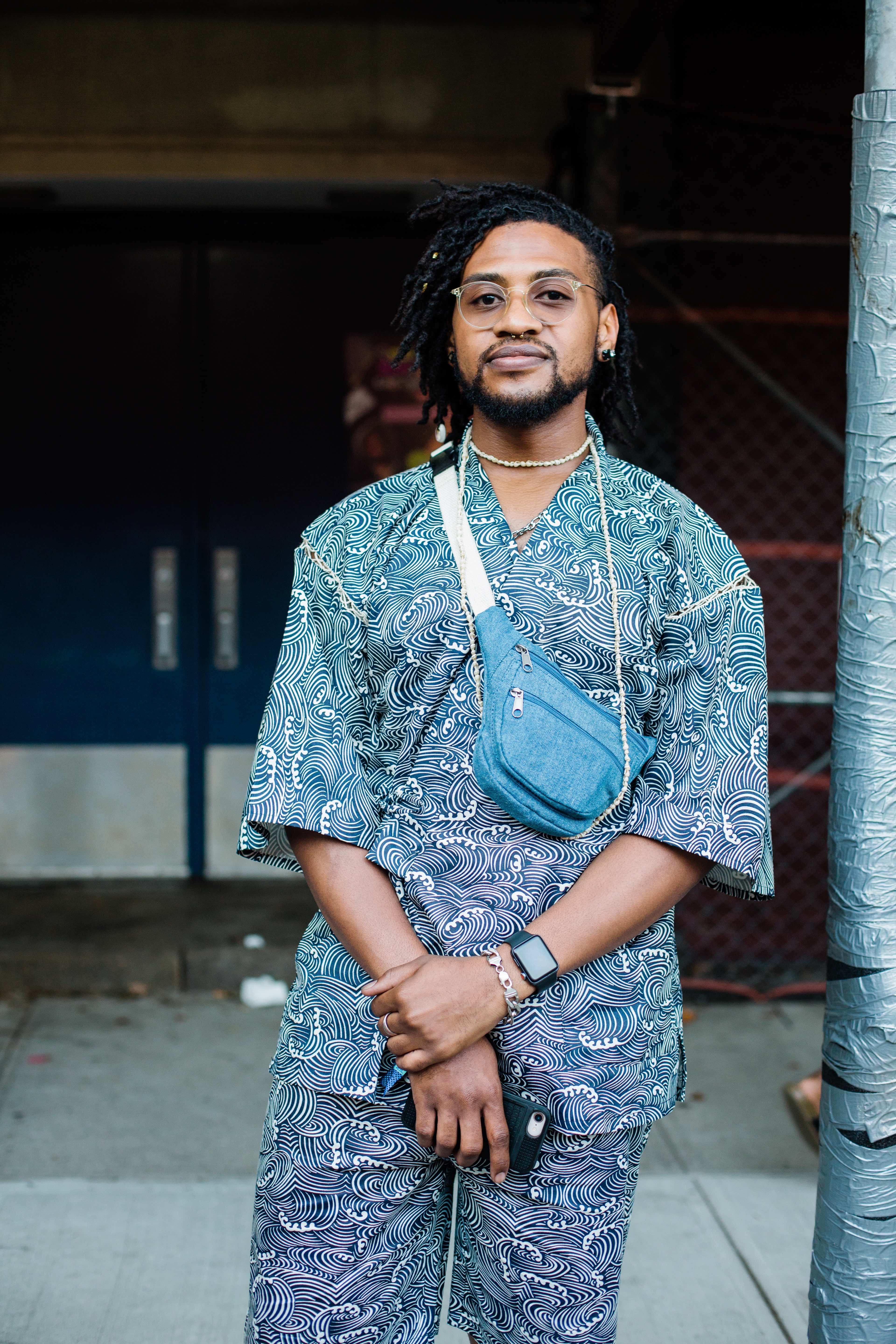 “The future of the resistance looks pretty strong to me as a millennial because of the fact that we are not our grandparents. We will not just stand by and let things happen anymore. We want justice and we will fight for it. We are willing to fight for it. Evidence shows we are willing to die for it. Enough is enough. Things need to change. I feel like it’s becoming very strong and it’s becoming more relentless.’ 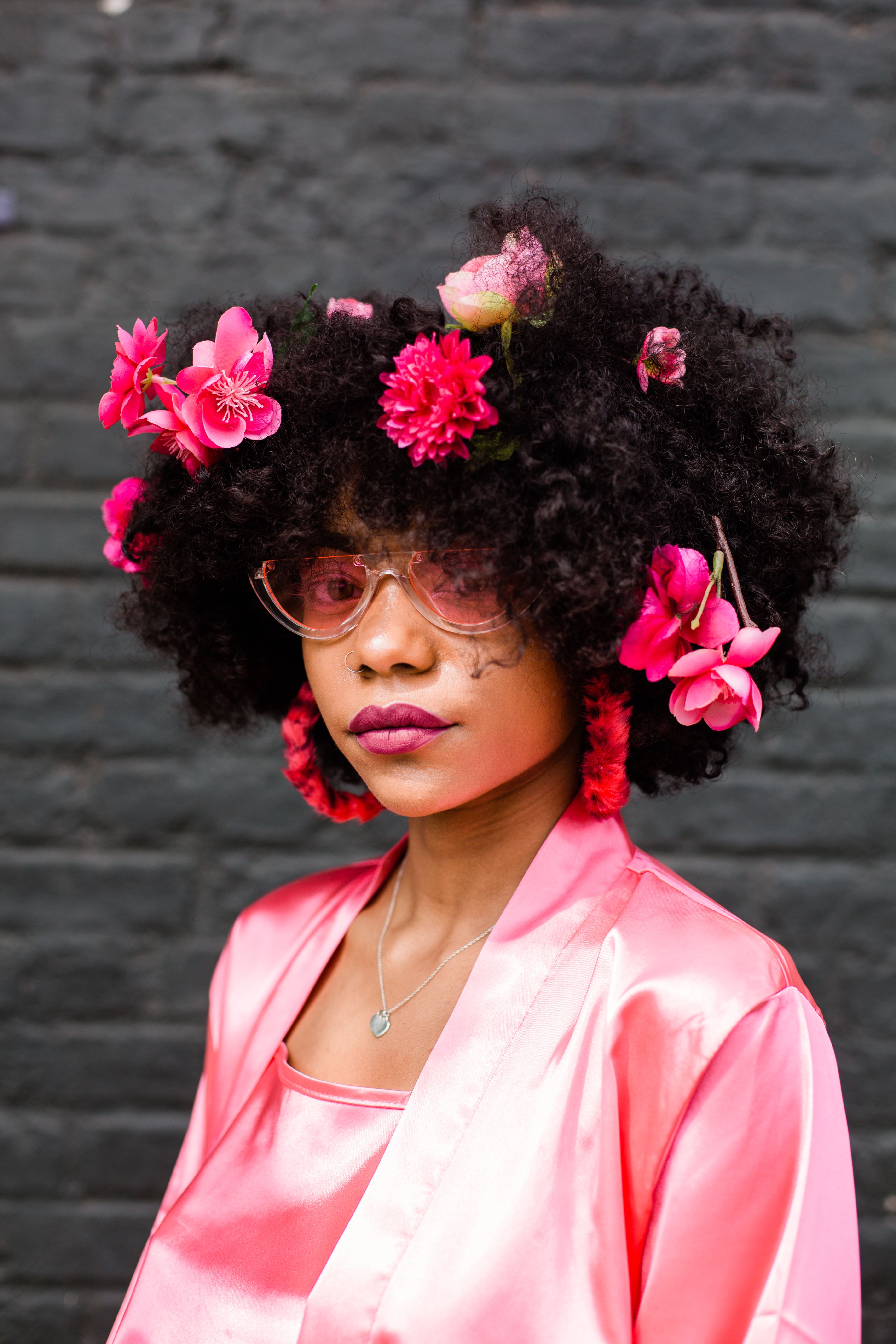 “For being a woman of colour, it definitely means to be more vocal in terms of wanting to have a change. With everything that’s happening and everything that’s going on in the world, like being more vocal and standing up for yourself. If you want something to happen, you have to take action for it.” 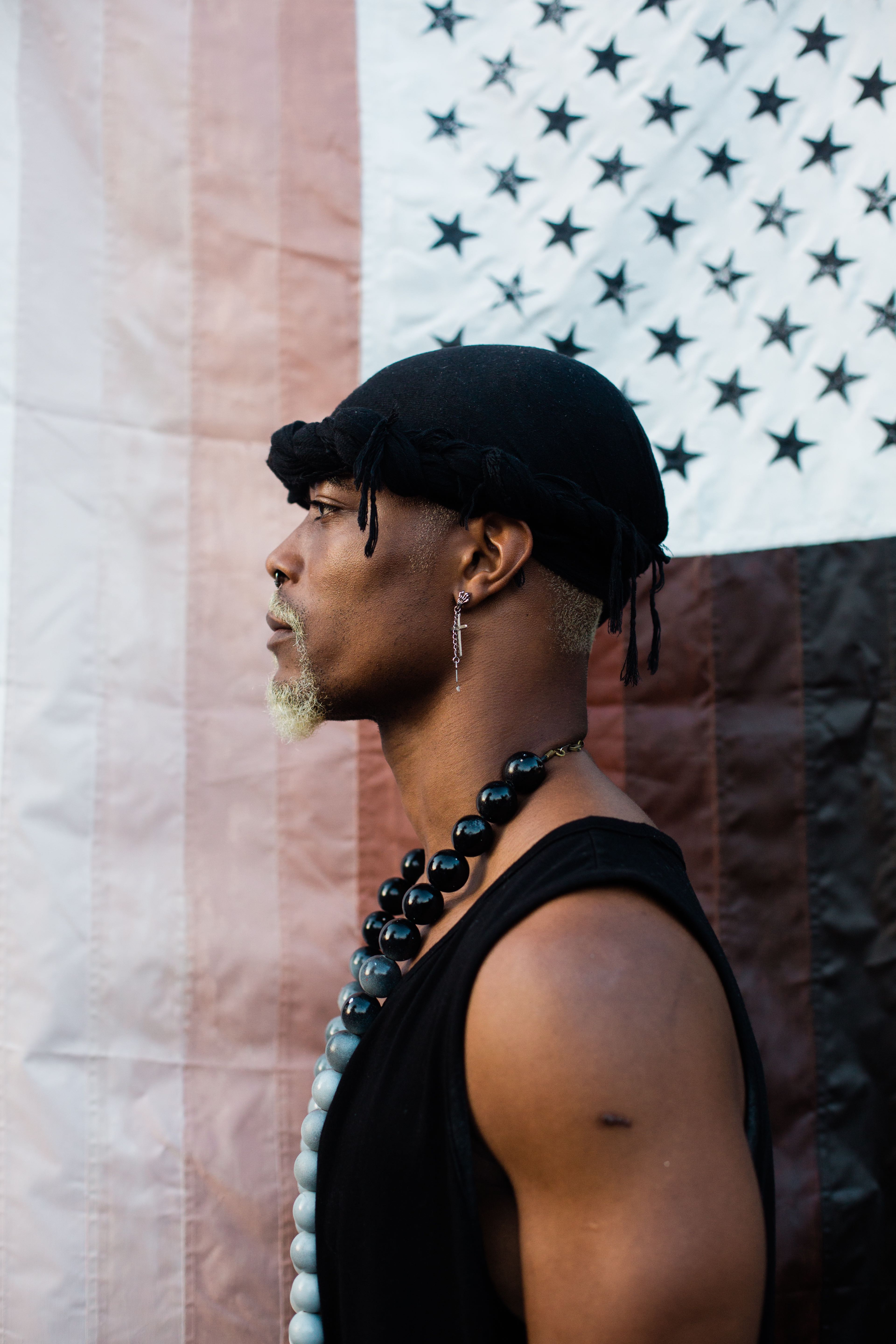 What would my version of equality look like? In the future, where everyone has the mindset, through society and the law, to just let people be. If what someone is doing does not hurt you or affect you in any way, then there’s no reason to stop [people] or judge them for doing it.” 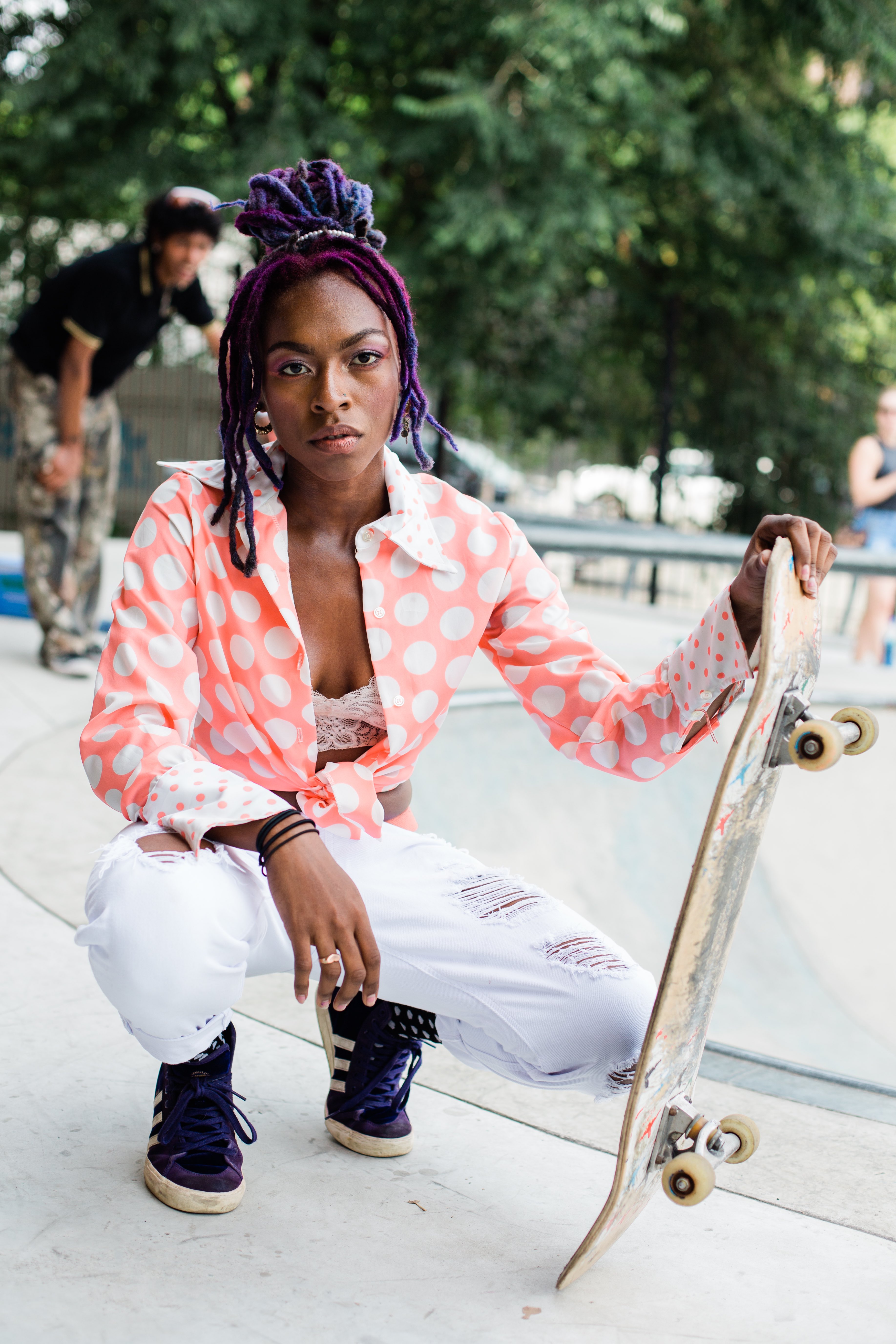 “It means empowering ourselves and our community. It means making sure that the people around us are safe and educated about certain problems in the world. AfroPunk is important because such a large group of people come here to express themselves and get away from the stereotypes that hold them, and not allowing them to express themselves as they should. This is gonna sound crazy but I want everyone to be feminist. I know the word ‘feminist’ has shifted over like the past few months but I really feel like feminism just means equality. If everyone is in to that then it could be everything.

To me feminism means equality for all genders, not only for like binary genders, like women and men, but I have transgender friends, I have queer friends, and gender fluid. So it means equality for all shaped and sizes. It means making sure that everyone feels good in the skin that they are in and that everyone is getting justice for things that happen.” 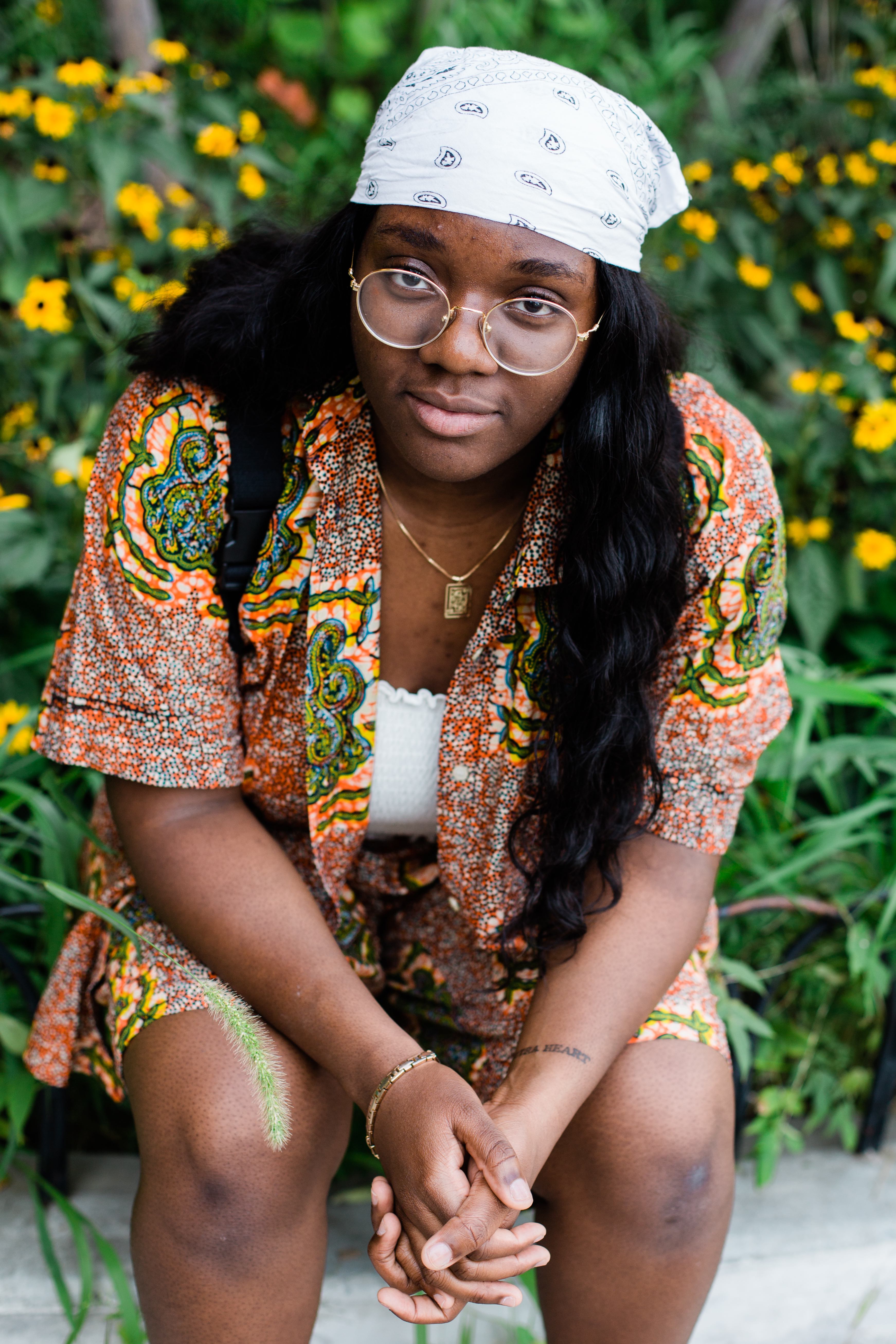 “Power to the resistance is doing what you believe in, standing up for what you believe and being able to fight with power for things that [are] going on around here in America that’s wrong. Just believing in what you know is right for you. I want to see a whole bunch of people coming together. Even though we are different as people we should be treated in a right way. Having a space like this is really important right now. Just being able to show our true selves and show our creativity and everything so that’s whats most important.

Honestly, to me, Charlottesville wasn’t surprising. What’s crazy to me is that in America, in this time, still like this still happens. It was crazy that something like that had to happen here in America. We can definitely change that. It doesn’t have to keep on happening. I know people say history repeats itself but it doesn’t have to.” 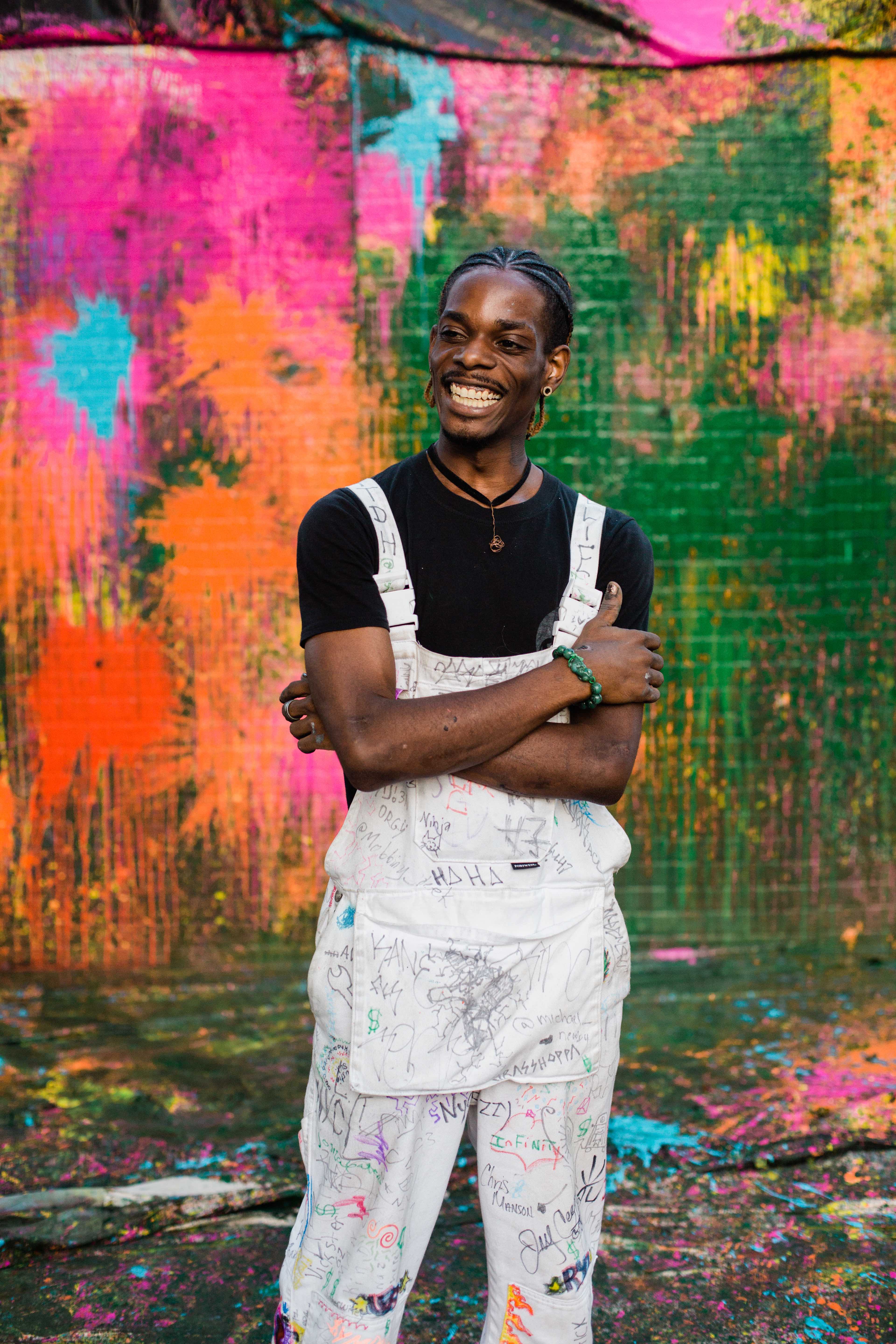 “I think that we as a race of black people [have to] come together and make moves. We are so disconnected within our own community that it’s sad, because we can’t progress in the way that we should. Look at how many black and mixed race people there are. It’s amazing when people come together – the amount of beauty that there is.

I’m about bringing different cultures together. That’s important for our future. We are too based on single genders, single races or one being superior to the other. We are all on one planet. We gotta come together – regardless of all the old traditions and old beliefs and all the old thought processes. We as humans are made to adapt.” 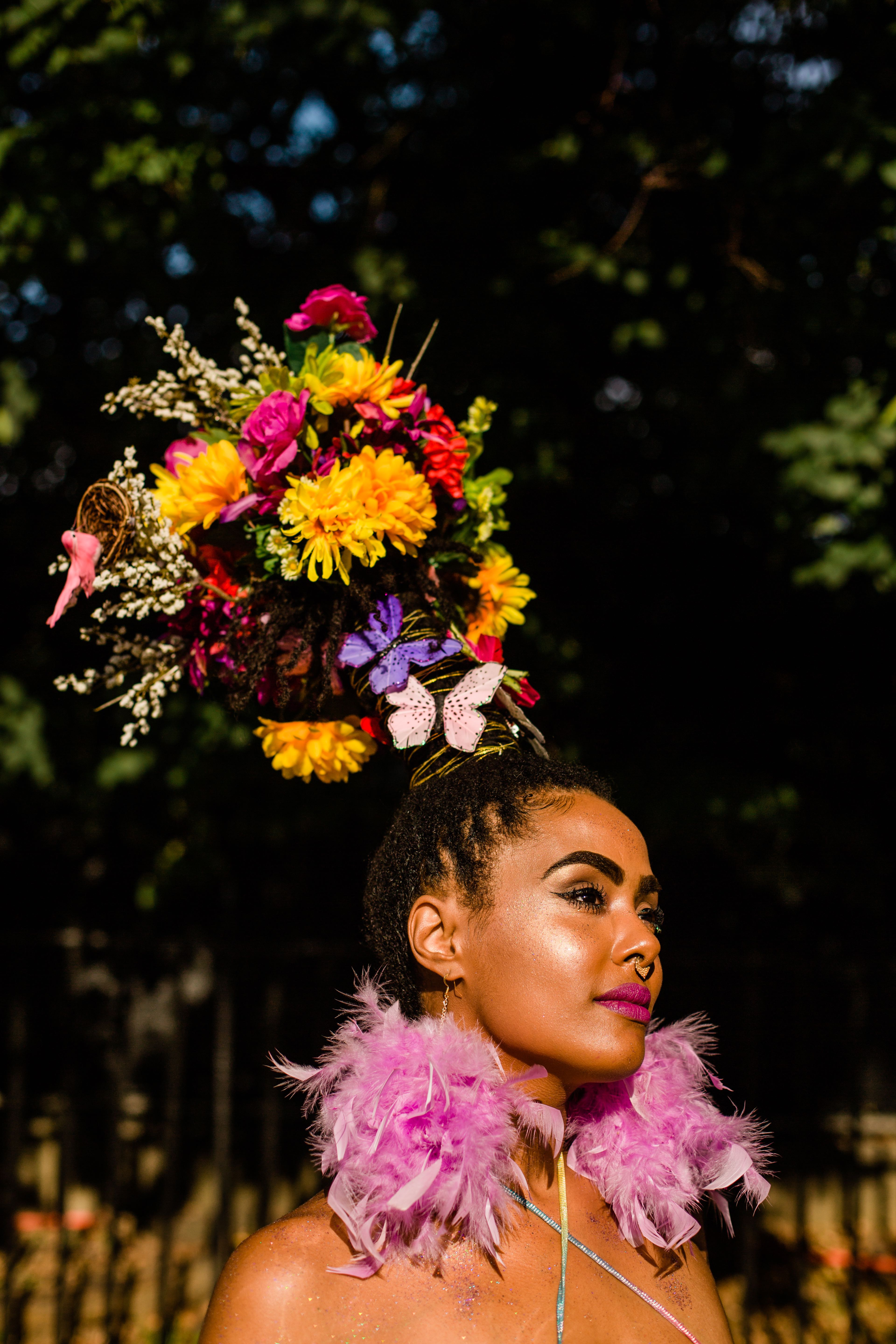 “Honestly, I feel like we’re kind of at a pivotal point. I feel like anything is possible. I think people are tired. People want to take matters into their own hands. I think it’s a good thing, because we are lacking togetherness. AfroPunk is beautiful but this is not every day. I feel like the people here’s job is to take this moment in time and carry it everyday with us and create that community outside. 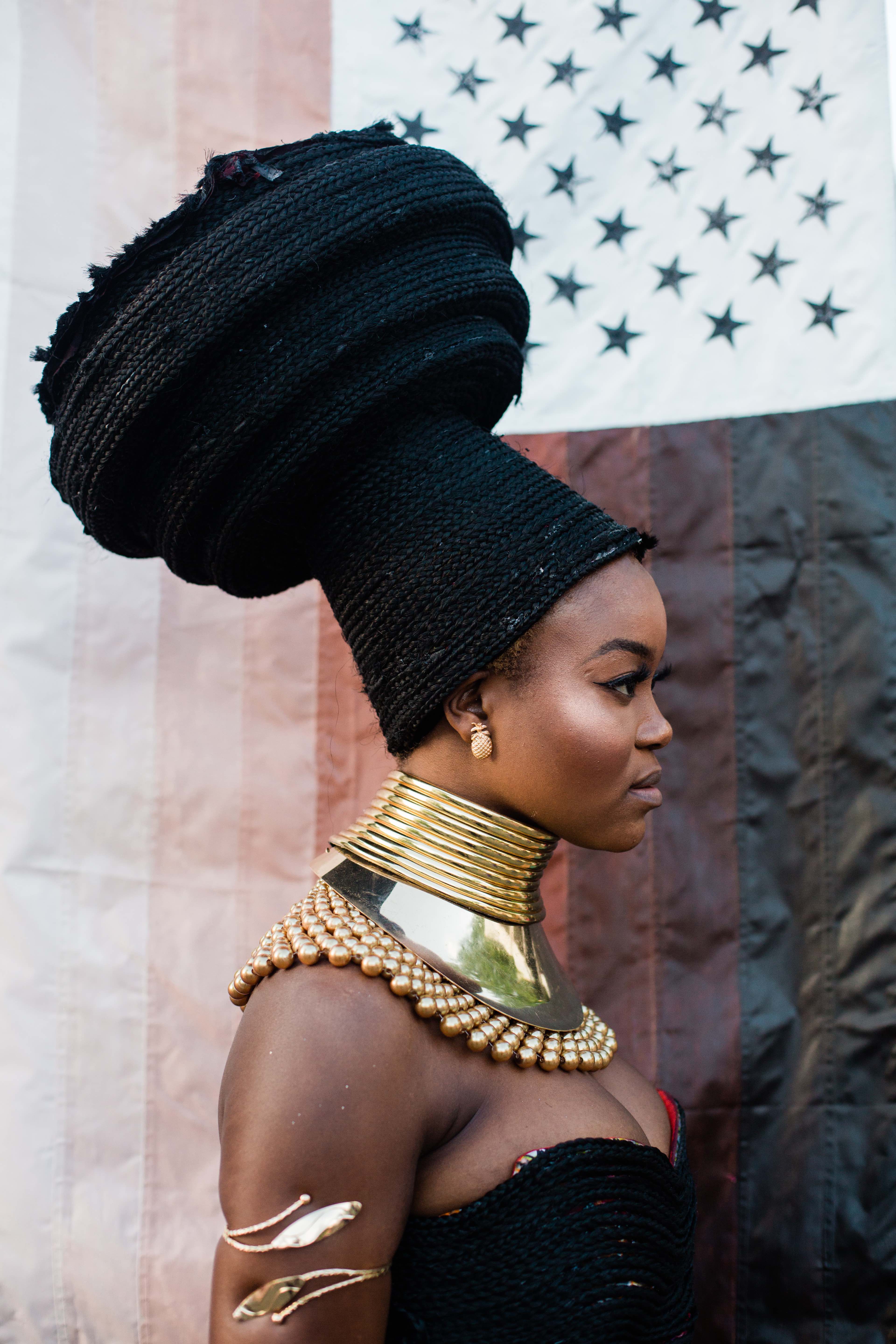 “I have a ‘things have to get worse to get better’ kind of mindset. I think right now, it’s really bad and it’s getting worse – especially with who we [in America] have as a president. I think that right now it’s a wake-up call: things haven’t changed as much we thought they had and it’s time for people to get it together.

See more of Gabriela Bhaskar’s work on her official website.

Whatsapp
RELATED ARTICLES
OTHER ARTICLES
By prosecuting those who harm the planet, individuals would finally be held to account – a victory that would change everything.
The Wing is an exclusive members club that promises to help women ‘thrive’ and ‘connect’ with each other. It seems like they’re wildly missing the point.
In a new book, KK Ottesen profiles 40 US activists who have dedicated their lives to the fight for human rights.
From lamplit street corners to red-brick estate fronts: artist Frank Laws pays tribute to the mundane magic of the city.
In their emboldening new book Trans Power, the LGBTQ activist makes an urgent call for change, while offering a new perspective on ‘trans‘ identity.
In the early hours of this morning, activists disrupted targets – including the Home Office and coach company W&H Tours – allegedly associated with deportation.