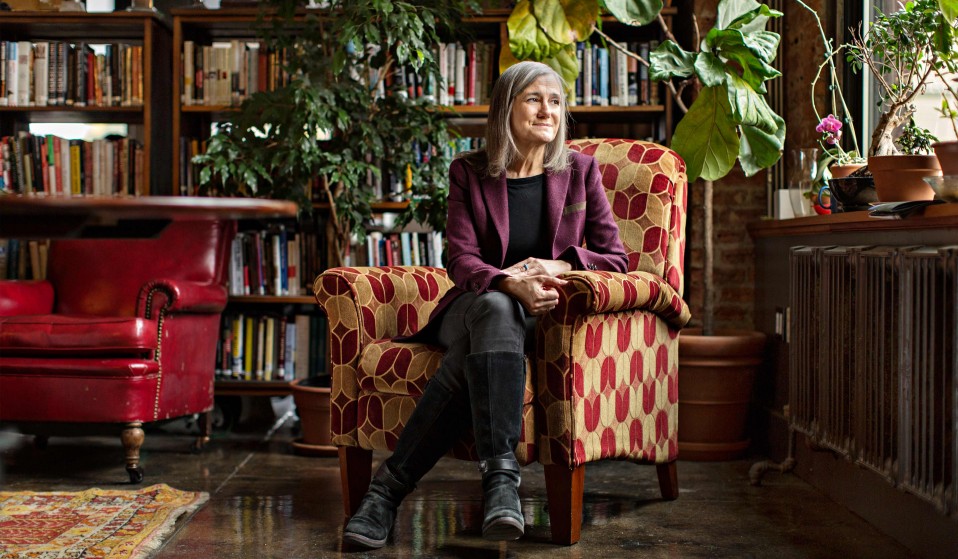 As the face of Democracy Now!, journalist Amy Goodman helps give voice to perspectives that usually go unheard, exposing the veil of deception dropped by corporations, politicians and their cohorts in the press. But the real battle, she says, has yet to be won.

As the face of Democracy Now!, journalist Amy Goodman helps give voice to perspectives that usually go unheard, exposing the veil of deception dropped by corporations, politicians and their cohorts in the press. But the real battle, she says, has yet to be won.

“Ever since I was a kid I was involved in journalism. My father headed a task force in our neighbourhood in New York to integrate the schools. Even though we had a diverse community, there were railway tracks and white and black communities would bunch up on [different] sides. I would go with him to the elementary schools – a thousand screaming parents would attack him. And he, very judiciously, guided our community to a more just place. Journalism is a way that I deal with issues of social justice, making the world a better place, exposing those who abuse power, bringing out the voices of people who aren’t usually heard.

“I originally come from Pacifica Radio, which was founded more than sixty-five years ago in Berkeley by a war resister called Lewis Hill. When he came out of these detention camps after World War Two, he said there’s got to be a media outlet that’s not run by corporations that profit from war. A media that’s run by journalists and artists. George Gerbner, the founder of the Cultural Environment movement said, ‘Not run by corporations that have nothing to tell, and everything to sell, that are raising our children today.’ And so Pacifica was born.

“The first station was KPFA in Berkeley, then Los Angeles, my station WBAI in New York, a station in Washington DC, and in 1970 KPFT in Houston went on the air. KPFT is the only radio station in the United States that was blown up. They went on the air in the spring of 1970, and within weeks the Ku Klux Klan strapped dynamite to the base of the transmitter and blew it to smithereens. When they got back on their feet and rebuilt the transmitter, they blew it up again. I don’t know if it was the Grand Dragon, or the Exalted Cyclops, but whoever did it said it was his proudest act. And I think that’s because he understood how dangerous Pacifica is, how dangerous independent media is. Dangerous because it allows people to speak for themselves.

“I am transformed every day when I hear someone speaking from their own experience. The reason the Klan can’t tolerate independent media is because, when you hear someone speaking for themselves, it breaks down caricatures and stereotypes that fuel hatreds, that divide us. Whether it’s a Palestinian child, or an Israeli grandmother, or an aunt in Iraq – you begin to understand where they’re coming from. That’s the beginning of peace. I think the media can be the greatest force for peace on earth. Instead it is wielded as a weapon of war. And that’s what we have to challenge. That’s what we have to change.

“I am very inspired when people stand up, believing that they can change a terrible situation. Take the streets of Ferguson, Missouri, where Michael Brown, a young unarmed African-American man, was killed by a police officer. The resistance that has taken place as a result of that, day after day, from the boiling hot August days to the freezing cold days of winter – the whole community has demanded justice.

“The Justice Department in Washington recently issued a scathing report exposing the racism of the Ferguson Police Department, demanding that there be change. But the most significant response has been the response of the people. The whole Black Lives Matter movement. That’s what inspires me – when people organise. The anthropologist Margaret Mead said, ‘Never doubt for a moment that a small group of thoughtful, committed people can change the world. Indeed, it’s the only thing that ever has.’ This is not a small group of people. This is people uniting in their communities, all over the country. And in fact, all over the world.

“We flew from Ferguson to the protests in Staten Island. Then to Lima, Peru, for the UN climate summit. At one of the first protests in Lima, a group of young people were laying on the ground chanting, ‘I can’t breathe, I can’t breathe.’ That’s what Eric Garner said as he was being killed by the police [in New York, July 17, 2014, when he was strangled in a chokehold]. And they were making that connection between police brutality and the abuse by authorities with climate change. The whole idea of a fossil fuel-polluted world; ‘I can’t breathe.’ It’s those connections – whether we’re talking about climate chaos, police brutality, or the war now in Iraq, in Afghanistan, in Yemen, in Syria, Lebanon; this neverending war that people, including soldiers, are speaking out against – it’s that kind of organising that so inspires me.

“[My message for young journalists is] question authority. I mean, that is the basic tenant of any journalist. I.F [Izzy] Stone is a ground-breaking investigative journalist. In teaching journalism students he said, ‘If you’re gonna remember anything, remember these two words: governments lie.’ That’s very important. Young people especially tend to question authority, and journalism is such an important way to do that. We have to hold those in power accountable. My brother, also a journalist, David Goodman and I have written a couple of books together. Our first book was called The Exception to the Rulers exposing oily politicians, war profiteers, and the media that loved them. ‘Exception to the rulers’ – that’s what all journalists should be. Our second book is called Static because, even in the high-tech digital age, still all we get is static. That veil of distortion, lies and misrepresentation. The half-truth that obscures reality. When what we need the media to give us is the dictionary definition of ‘static’: criticism, opposition, unwanted interference. We need a media that covers power, not covers for power. We need a media that is the Fourth Estate, not for the state. And we need a media that covers the movements that create static and make history.

“I change every day, I am so deeply affected by the people that I cover. When I’m sitting at a table speaking to someone, I feel guilty that others can’t hear them. And that’s the power of media. I see the media as a huge kitchen table that stretches across the globe, that we all sit around to debate and discuss the important issues of the day – war and peace, life and death. And anything less than that is a disservice to a democratic society.

“Ultimately, my message for any young person is this: Pursue what you believe in. Follow your passion. And commit yourself to making the world better than it was when you were born. I really, deeply believe if we all do that, we can’t go wrong. You know, Martin Luther King said, ‘The arc of history is long but it bends towards justice.’ That doesn’t just happen. It happens because people, out of their pain, their frustration and their deep beliefs in humanity, work to make it happen. You know, we can’t – we will not just achieve democracy. We have to fight for it every day. And no matter what avenue you choose, through art, through healthcare, through journalism, through electoral office, or challenging those in electoral office – whatever portal through which you choose to see the sea, what counts is what we do together. I think you should follow your dreams. Don’t let anyone deter you from that.”

This story has been condensed from an interview.

Linkedin
RELATED ARTICLES
OTHER ARTICLES
He may absorb most of the spotlight, but the real lesson of the revolution comes from the people on the ground.
For This American Life producer Stephanie Foo, the key to achieving your dreams is giving yourself permission to fail.
Come and celebrate the release of Huck's Fiftieth Issue Special with us on Thursday May 14 at 71a.