News & Politics / Activism / Corporations or garment workers? It’s time to pick a side 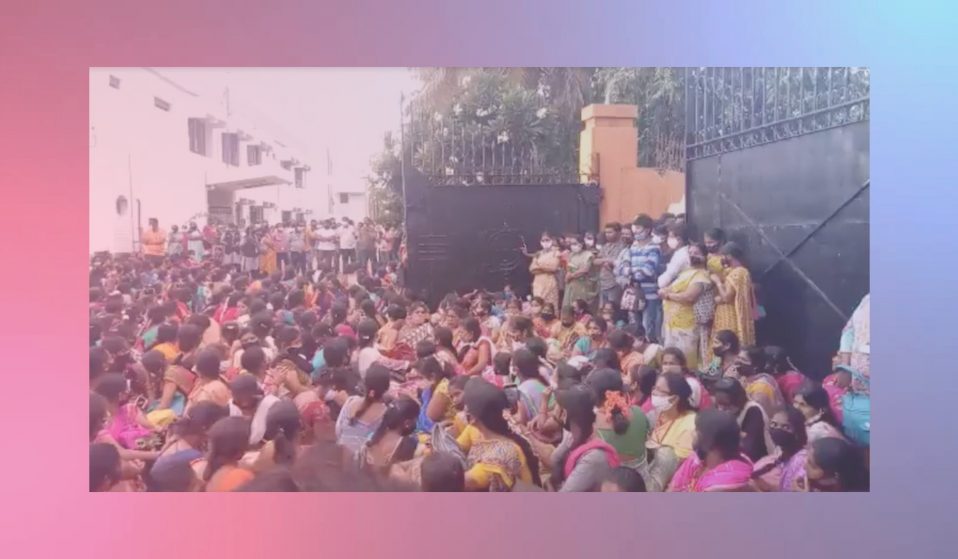 Garment workers are in a fight to the death with some of the most powerful companies on the planet – here’s how you can stand with them.

Garment workers are in a fight to the death with some of the most powerful companies on the planet – here’s how you can stand with them.

In April 2013, the Rana Plaza factory building collapsed in 90 seconds. It’s shockwaves ricocheted through Dhaka, beyond Bangladesh, across South Asia and out into the world. The rubble, blood and crushed bones of 1,138 people revealed the howl of misery at the heart of the fashion industry.

Seven years later, the fashion industry’s response to COVID-19 is a juggernaut slamming repeatedly into thousands of factories across the Global South. Walls are not falling and factories are not on fire, but it is no less terrible to see this situation unfold.

As lockdown shut clothing shops, multi-billion dollar brands and retailers took the decision to postpone or cancel clothing orders – even completed orders sitting in ports ready for collection. They asked factories for discounts as high as 90 per cent, expecting countries like Bangladesh to further subsidise their profits. The result was the closure – both temporary and permanent – of thousands of garment factories. Millions of garment workers lost their jobs and means to survive. Bangladeshi journalist Redwan Ahmed recently reported on the case of Nazmin Nahar, a 26-year-old mother of two, who has had no wages with which to pay for food or rent for more than two months. Nazmin is ‘living on borrowed rice.’

This latest crisis reveals the stark truth about fashion – it is an industry that exists to maximise corporate profit through the exploitation of millions of people, most of them women, many of them migrants, and the majority of them in the Global South.

This strategy of exploitation is deliberate. In the 20 years between 1970 to 1990 there was a dramatic change in where clothes and shoes were made. Fashion corporations shifted production to the Global South where they could pay lower wages and be less hampered by environmental laws.

This meant that factory workers were no longer direct employees of the brands they worked for. Millions of people could now be abused and disowned. No pensions, no maternity leave, no safety checks – a global web of exploitation hidden behind glossy photoshoots, pretty products, and superstar celebrity deals.

The promise that globalisation would make life better for all was a lie. The Global South was invited into this system on the basis that it stayed subjugated – that wages and standards stayed low and that trade unions were suppressed. COVID-19 starkly reveals what happens when millions of people are paid so little that they have no margin for error and no ability to save for emergencies.

But though these jobs are tough and exploitative, they are needed. Wages means food, housing and transport. It means the opportunity for greater autonomy for women – for not marrying young; for making choices about motherhood; for not having to stay with an abusive partner; for paying for schooling, supporting elderly parents, and so on.

There were few formal job opportunities before export-oriented production took off in countries like Bangladesh and China. The importance of these jobs is indisputable. But when garment jobs are taken away from the communities of women who depend upon them, women begin to starve.

So what can you do?

When people see bad things happening in fashion, a common response is to call for boycotts. And yet COVID-19 is the boycott. We know now what happens when the entire world stops buying fashion: It means mass starvation for garment workers. Calling for boycotts is not, therefore, the answer.

This does not mean that those in charge of supply chains are off the hook. Social change never happens by accident, and we cannot change anything unless we work collectively. Connect yourself with groups like the Clean Clothes Campaign, Labour Behind the Label, Workers Rights Consortium, and the Asia Floor Wage Alliance. The #PayUp campaign has been working hard for months to get brands to pay factories for their orders. Thanks to public pressure, this campaign has had notable successes, but still some brands like TopShop, Urban Outfitters, and Gap are refusing to pay what they owe.

The #PayUp campaign needs to get bigger. Demonstrations are difficult but not impossible and can take place outside the shops and headquarters of brands. Petitions exist to hold companies to account and can be signed and shared widely. Social media is critical for causing disruption to brands – reply to their posts, ask awkward questions, don’t let them hide this issue away.

Because corporations are global, we must also be global. International solidarity has never been more important. Take the example of the closure of Debenhams in Ireland. At the same time as Irish staff were being made redundant, the Debenhams sourcing office in Bangladesh was shut down and 69 Bangladeshi workers were fired. The Irish staff rallied to the cause of their Bangladeshi colleagues – recognising that they had more in common with them than with their Irish and British bosses. A Crowdfunder was launched and 15,000 Euros raised as redundancy funds for the Bangladeshi staff.

K-World garment factory workers in Myanmar march on the boss in day 8 of their sit-down strike. They are fighting for higher wages and union recognition, and know a strong union and worker solidarity is the only thing that will change the hellacious garment industry. Sound on! pic.twitter.com/mwpkRJk6eS

This crisis is set to intensify – there are already calls for the minimum wage to be slashed for garment workers in Cambodia. Now is the time to forge links with trade unions, activist and civil society groups across the Global South. Not because ‘we’ can help ‘them’, but because our fight is the same fight and we can learn from and support each other.

This means following groups on social media, amplifying their voices, and responding to requests for action. Practical international solidarity means lobbying governments, protesting outside embassies, writing to government ministers, and defending the right to protest and have trade unions. Unions give workers a voice on issues like wages, working hours and conditions, wages, the problem of overproduction, the pace of work, and health and safety.

COVID-19 has shown us that our world is as interconnected as the garment supply chains that criss-cross the globe. Everybody’s sphere is different, but everyone has a part to play – raise funds, screen documentaries, link your trade union to a garment workers union in the Global South, read books, share petitions, do social media posts, write articles, have conversations with friends and family, go on demonstrations, pass motions at your university, contact your MP, make art, shout from the rooftops if necessary – just do not let garment workers be forgotten.

Tansy Hoskins’ new book, Foot Work: What Your Shoes Are Doing To The World, is out now. Follow her on Twitter.

Linkedin
RELATED ARTICLES
OTHER ARTICLES
By turning a real-life crisis into daytime television fodder, TV bosses have once again shown themselves to be completely out of touch with audiences.
Yesterday thousands gathered outside Buckingham Palace after news of the Queen’s death broke.
Following the announcement of an 80% hike in the energy price cap from 1st October, crowds gathered outside the offices of energy regulator Ofgem to protest and declare their intention to undertake a payment strike.
Sean Maung’s photos are a love letter to the Black and brown communities that make up New York.
Birdy Chu reflects on documenting the historic moment in which the territory was formally passed back from the UK to China.
For over a decade, gamblers have won big by employing people to place live bets from the court. But does this dubious method still work?