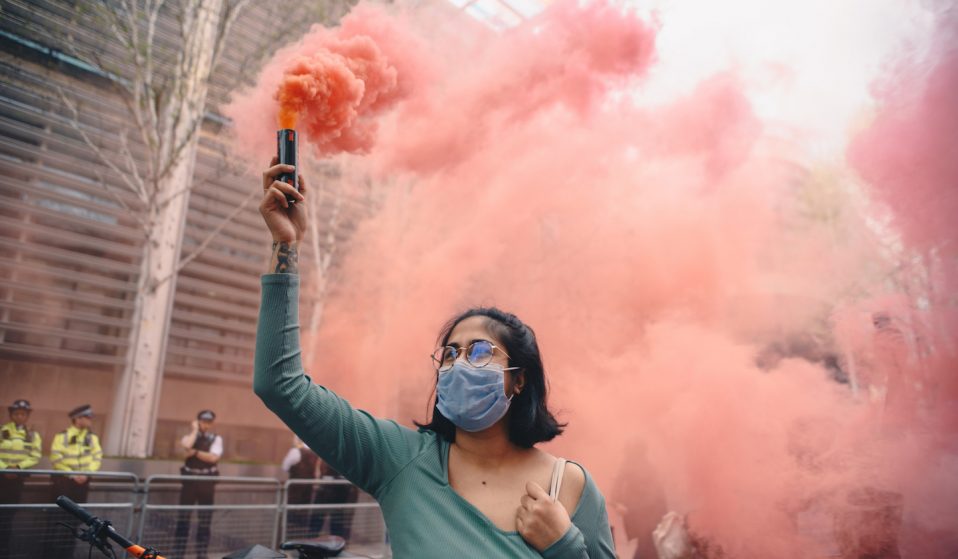 A new campaign is calling on universities to sever ties with the private company that runs Britain’s immigration detention centres.

A new campaign is calling on universities to sever ties with the private company that runs Britain’s immigration detention centres.

From teach-outs to a steadily growing online campaign, the Mitie Must Fall movement – a collaborative project between staff and students at Sussex and Durham universities – is becoming a force to be reckoned with on campus.

Mitie Group PLC is a facilities management company that offers a mixture of contract services, including cleaning, security, and technical services at a growing number of UK universities, and it’s also one of the largest providers of management services to migration removal centres in the UK. Since the beginning of the pandemic, the company has managed to double their revenue, with a growing number of universities outsourcing the company to provide on-campus security. But for migrant students and staff, Mitie’s presence at UK universities poses a serious threat.

“I think [Mitie’s] presence on campus just feels like a slap in the face,” Jo*, a migrant student at the University of Sussex, explains. “Coming here, I thought I was going to be a student at a university that cared about the well-being and education of migrant students, refugees and asylum seekers, but now I’m having to come to terms with the fact that my university funds an organisation that a couple of years ago, would have played a role in my detainment. Sussex needs to part ways with Mitie if they really care about being a sanctuary for migrant students.”

With its history of subjecting detainees to abhorrent conditions and racist WhatsApp group chats, Mitie’s treatment of migrants has prompted groups of student activists to fight back. Now, gaining nationwide momentum, the Sussex-born Mitie Must Fall campaign is demanding that universities sever as many contracts as possible with the corporate giant.

After being awarded a £525 million “escorting” contract by the Home Office in 2017, Mitie also now runs two large Immigration Removal Centres (IRCs) and around 30 smaller holding facilities – these are detention centres, including prisons, where people can be detained indefinitely. Mitie has also come under fire following a significant outbreak of Covid-19 amongst hospital staff after the company was found to have broken Covid safety laws.

Students, and staff forced to wear the Mitie logo want them gone! And the tunnel speaks… 👀👀 https://t.co/SbLdZlziBr

And it gets worse still. On 12 April 2022, five whistleblowers from the company claimed that during deportations, Mitie staff had been soliciting sex workers in countries like Romania, Vietnam, Kenya, and Brazil over the span of ten years while on routine deportations. “The money paid by these Home Office contractors using sex workers while abroad doing deportations goes further than it would in the UK,” says one contractor. “But it is taxpayers’ money being used to fly us to these places where sex is being paid for.”

A Mitie spokesperson told Huck that “as one of Britain’s largest employers we are proud of the hard work and dedication of our 75,000 colleagues up and down the UK. We do not set immigration policy, however, we are committed to ensuring those in our care are treated with dignity and respect.”

Continuing, they also said that “the group’s senior management recently became aware of allegations relating to anonymous and historic claims regarding inappropriate behaviour by a small number of employees working on the Overseas Escorting contract. We have not been provided with evidence to substantiate these claims, nor have any details of specific instances been shared with us.

“However, given the serious nature of these allegations, we have been conducting an investigation. To date, we have found no evidence that this behaviour occurred during our time managing this contract, which commenced in May 2018.”

Additionally, as one of the main profiteers from former-Home Secretary Theresa May’s Hostile Environment policy, Mitie Must Fall activists claim that the company’s “role in running campus services, such as security, directly endangers students”.

“The same executive staff that work for a company running prisons and detention centres – particularly with Mitie’s track record – should not have any role on campus,” activists at the Sussex branch of Mitie Must Fall highlight in their briefing document. “Particularly considering the racist and violent culture endemic to Mitie, and the presence of refugee/asylum seekers on campus.”

While the University of Sussex claims to embody values of equality, diversity and inclusion, the group states that “the existence, presence and influence of Mitie on campus is completely incompatible with these values”. By partnering with Mitie, they suggest, the university is effectively endorsing Mitie’s practices and ethos as a company. In 2022, Mitie owns 35 per cent of the University of Sussex’s estates and facilities group, receiving a contract of approximately £30 million a year.

“Our contract with Mitie to manage our estates and facilities arose in 2020 when all Interserve contracts transferred to Mitie.  All contracts are legally binding, and there are severe penalties for early termination.  We expect all our suppliers and contractors to comply with our supplier code of conduct, which forms part of our selection criteria for suppliers.  We carry out due diligence on all prospective partners, suppliers and contractors and this will remain the case when our facilities management contract with Mitie is up for renewal in 2023-24.”

We’ve started putting flyers up around campus, including in some very fitting places! Keep a look out! #MitieMustFall @SussexUni pic.twitter.com/n63snwEyE9

As the University and College Union’s fourth round of industrial action this academic year approaches, migrant staff and students are fearful to take part. As reported by The Guardian, “employers have been obliged to report to the Home Office anyone in the UK on a tier 2 ‘skilled worker’ visa who exceeds 20 days’ unpaid absence in a year”. For migrant staff, this means that they risk losing their visas and could potentially face deportation.

Similarly, 2019 saw the rise of campaigns from both staff and students for universities to suspend attendance monitoring after students received warnings that low attendance could have consequences for their visas too. Over 70 student activist groups, including People & Planet, released a statement saying “monitoring migrant students’ attendance on strike days amounts to the cynical use of students’ visa precarity against workers’ right to industrial action”. With Mitie university presence growing ever larger, it’s unclear what role the company may have in assisting the deportation of students.

At People & Planet’s University of Bristol branch, the group shared a post on Facebook that reported Mitie had been contracted by the Home Office to carry out inspections on self-isolating international students on campus. But activists from the Durham branch of the Mitie Must Fall movement also call into question the company’s labour ethics. At the university, Mitie currently has a £5 million contract. Durham student newspaper Palatinate reported that the majority of detainees at the Mitie-run Derwentside, only a half-hour drive from the city of Durham, have “endured human trafficking, modern slavery, abuse, torture, gender-based violence and other unimaginable crimes”.

A spokesperson from Durham University told Huck that the university’s contract is with “Mitie FM Ltd, which does not manage the Hassockfield centre”, however, Mitie Group PLC is the majority shareholder in both Mitie FM Ltd and Mitie Care and Custody, and there’s a significant overlap in the boards of directors of both firms, and that they share an address.

While Mitie explains that they “do not set immigration policy” to Palatinate, Corporate Watch revealed that Mitie has previously employed detainees at a rate of £1 per hour. But even beyond their contractual obligations, Mitie security staff have a notorious history of abusing their power. Earlier this year, Mitie “failed to investigate racist staff messages” according to The Guardian, and one Twitter user details how a Mitie security guard threatened to “smash [her] face in” after she requested help with an ATM in a Sainsbury’s.

However, a Mitie spokesperson told Huck that “we are an employer of 75,000 people throughout the UK and that the actions of a very small proportion of those employees should not taint the exceptional work that the vast majority of our colleagues are undertaking every day”.

They also added that “earlier in the year, Mitie Group’s senior management were made aware of inappropriate messages shared in a private WhatsApp group. Following an investigation, in light of the seriousness of the allegations, we have dismissed a number of employees whose behaviour did not align with the values and standards we expect of our colleagues.”

“As soon as Mitie Group’s senior leadership were made aware of allegations of racist behaviour in a private WhatsApp group, they were treated with the utmost seriousness and an internal investigation was launched – to suggest otherwise is not accurate.”

Responding to Mitie Must Fall’s allegations, a Durham University spokesperson says that the university “awarded a new facility management contract with Mitie in 2018, following a rigorous, transparent and competitive procurement process. Representation from the student body was included, and consideration of our corporate, social and environmental responsibilities and equality and diversity commitments.”

There is, however, hope for the staff and students who’ve stood against Mitie. With support from Durham’s UCU branch, the Mitie Must Fall movement shows no signs of slowing down. On the National Day of Action Against Mitie, the Durham group are planning a day of action against the university’s links with detention centres and has already published an open letter addressed to Vice-Chancellor Karen O’Brien.

Demands include an amendment of the ‘Responsible Procurement’ policy to include provisions against engaging with companies involved in the border industry and that the university and its leaders make a statement opposing Derwentside Detention Centre and other bordering operations.

The final demand is an immediate commitment to insourcing the ownership and management of existing Mitie Group PLC staff when the current contractual relationship ends, including a commitment that all jobs will be protected and workers’ rights respected. A Durham spokesperson tells Huck that the university will be reviewing its contract “with Mitie at the point of renewal, as with any other contract”, meaning that hope is on the horizon.

In the meantime, there’s a lot of work to be done. As Mitie Must Fall Durham state in their open letters, the university “cannot claim to welcome migrants, refugees, and international students while being complicit in abhorrent practices and treatment of migrants”. Radical change is needed imminently.

Linkedin
OTHER ARTICLES
In the latest OFFF Dispatch, the enigmatic designer dives into his process, connecting the dots between his unique and varied creative output.
The situation in Afghanistan remains dire, with many groups facing persecution at the hands of the Taliban.
Following the release of his newly republished 1991 book, Redheads, the American photographer reflects on his celebration of ginger people and their magnetic power.
Our new magazine is here, starring the inimitable Mitski. Order your copy now and join us on a trip around the world.
The government’s failure to take long Covid seriously has led to the formation of a group campaigning for the thousands of forgotten victims of the illness.
In our first OFFF Dispatch piece, the Arce Studio founder shares her tips on standing out from the crowd.