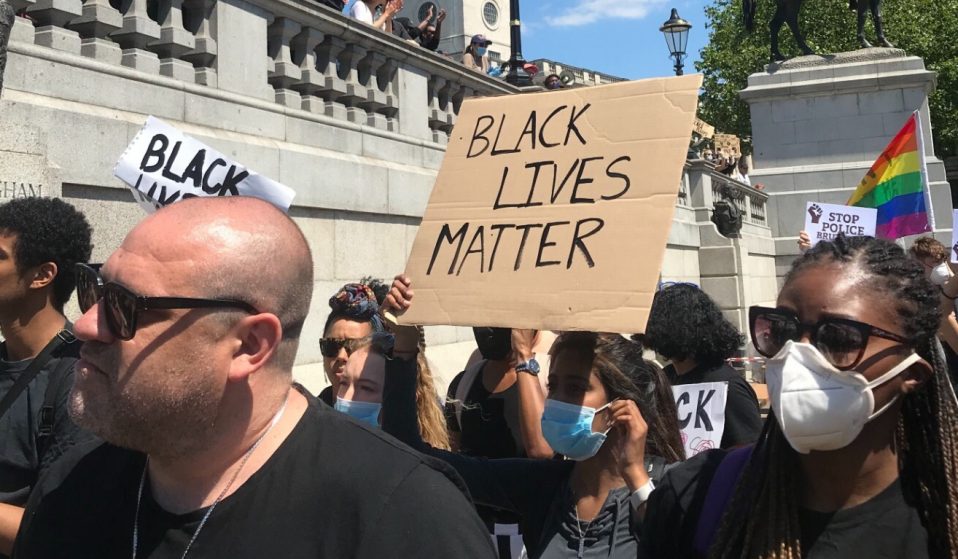 Now is not the time to switch off. Now is the time to listen, learn, and act to support black communities in the US and beyond. Here's how you can do that.

Now is not the time to switch off. Now is the time to listen, learn, and act to support black communities in the US and beyond. Here's how you can do that.

This week, tens of thousands of people have taken to the streets to protest the killing of African American man George Floyd by Minneapolis police. The anger, coalesced behind the “Black Lives Matter” slogan, has seen violent clashes between police and protestors in cities across the United States and solidarity protests erupting across the world, including here in the UK.

As the demonstrations have intensified, so too has the rhetoric from the state. Yesterday President Donald Trump threatened to send in the military to quell the protests before violently clearing the streets outside the White House of nonviolent protestors so he could pose for a photoshoot outside a nearby church. Scenes of tear gas-filled streets and people fleeing as rounds of rubber bullets have been shot into crowds have dominated the news. Many have been killed and injured in the unrest. Despite the arrest and charging of Derek Chauvin – the police officer shown to be kneeling on Floyd’s neck in a viral video circulated after his death – there seems to be no end in sight.

As millions of people around the world demand #JusticeForGeorgeFloyd and the countless other innocent black lives lost in countries around the world to racial violence, we at Huck wish to express our continued support and solidarity for those demanding a better world. https://t.co/RcznBiQFjG

The killing of George Floyd is just another instance in a long line of systemic racist abuse, oppression and violence stretching back over centuries. For white allies, the question of how to support, step up and stop the cycle of hate has never weighed heavier. Here are some suggestions to get you started.

Donate to all 39 bail funds in the US.

More details on bail funds and legal help by city.

Between the World and Me, Ta-Nehisi Coates, Speigel & Grau

The Danger of a Single Story – Chimamanda Ngozi Adichie

A History of the N-word – Tetsuhiko Endo

The Case for Reparations – Ta-Nahesi Coates (The Atlantic)

Any and all content on gal-dem (you should also become a member).

This American Life – The Problem We All Live With

This Google Doc being circulated online is an invaluable resource for all.

How To Support Black Lives in The UK – a list of resources by @perkin_amalaraj.

This is by no means an exhaustive list. If we’ve missed a resource, group, fund or organisation please let us know and we’ll add it to the list. You can get in touch with us at ben.smoke@tcolondon.com

Linkedin
RELATED ARTICLES
OTHER ARTICLES
Photographer Robin Graubard’s debut book offers an unflinching record of turbulence and change across the Balkans.
Members of the collective share some of their reasons to run as part of #UnitedBySummits, a campaign that looks to uncover transformative power of the outdoors.
Photographer Phyllis Christopher recalls capturing sex and protest at a time when the city had become a haven for the queer community.
Following the release of his latest album God Don’t Make Mistakes, the rapper talks horror villains, police brutality and being unafraid to show his vulnerable side.
New legislation is set to make it more difficult to hold Israel accountable for its human rights abuses.
Over the weekend, London locals came together to resist a pre-planned police raid targeting delivery drivers.