News & Politics / Activism / In Portugal, protestors march against the threat of fascism 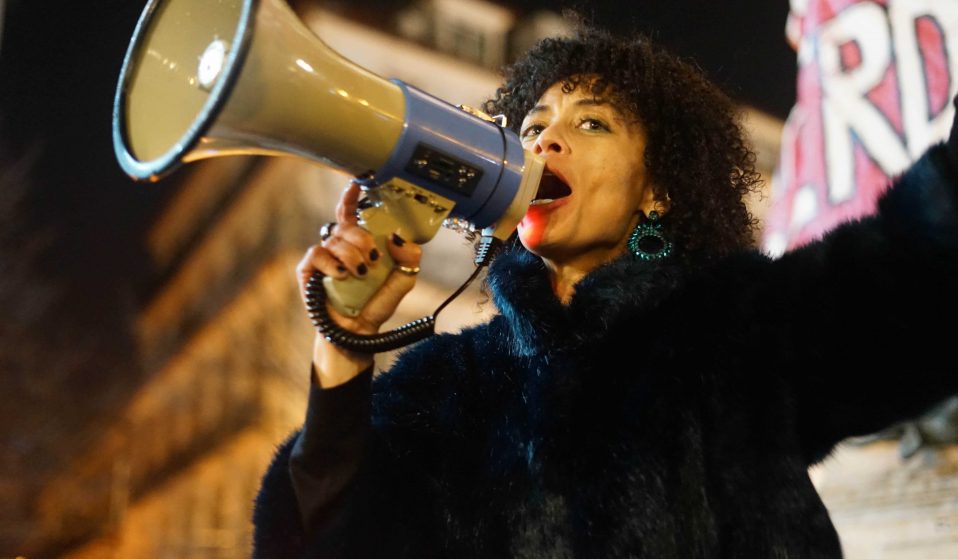 With reports of police brutality and rising racism, the country is getting ready to fight.

With reports of police brutality and rising racism, the country is getting ready to fight.

Hundreds of protestors flooded the rain-soaked streets of Lisbon, Portugal last Friday to take a stand against police brutality, racism and the increasing visibility of the extreme right. Hosted by Platforma Antifascista de Lisboa (PAFL), the event saw 57 associations and collectives – including SOS Racismo and CAIP – unite in solidarity to counter a far-right demonstration that was scheduled for the same time.

Organisers of the ‘Manifestação Contra o Fascismo!’ had been planning the demo for weeks, but it took on an even greater sense of urgency after a video capturing police brutality recently went viral. Filmed by local residents in the Bairro da Jamaica, the video brought to national attention the repression and mistreatment of people in the city’s peripheries, where a huge number of Portugal’s black Afro-descendent population reside.

“This right here is the first step – mobilising people in order to show that this is an issue and that we need to deal with it,” Carlos Kangoma, aka Lisbon-based rapper Lucy, told Huck at the demo. “The police have a lot of prejudice against people who live on the outskirts of the city… when we were young, we would live these situations where the police would come in and speak badly to us, harass us, use physical force when it’s not needed. Back in the day, we didn’t have cell phones to document it all, but we do now.” 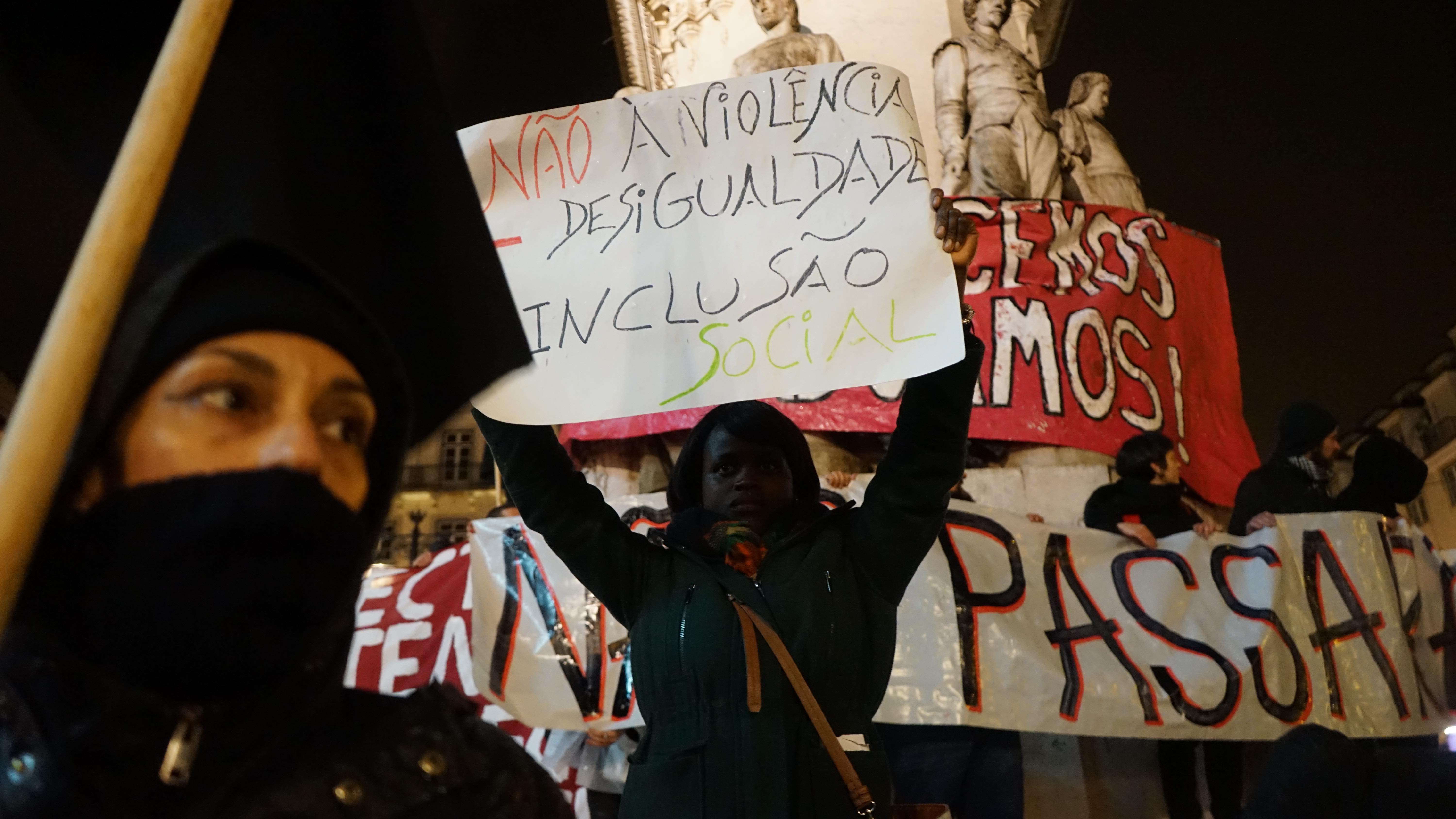 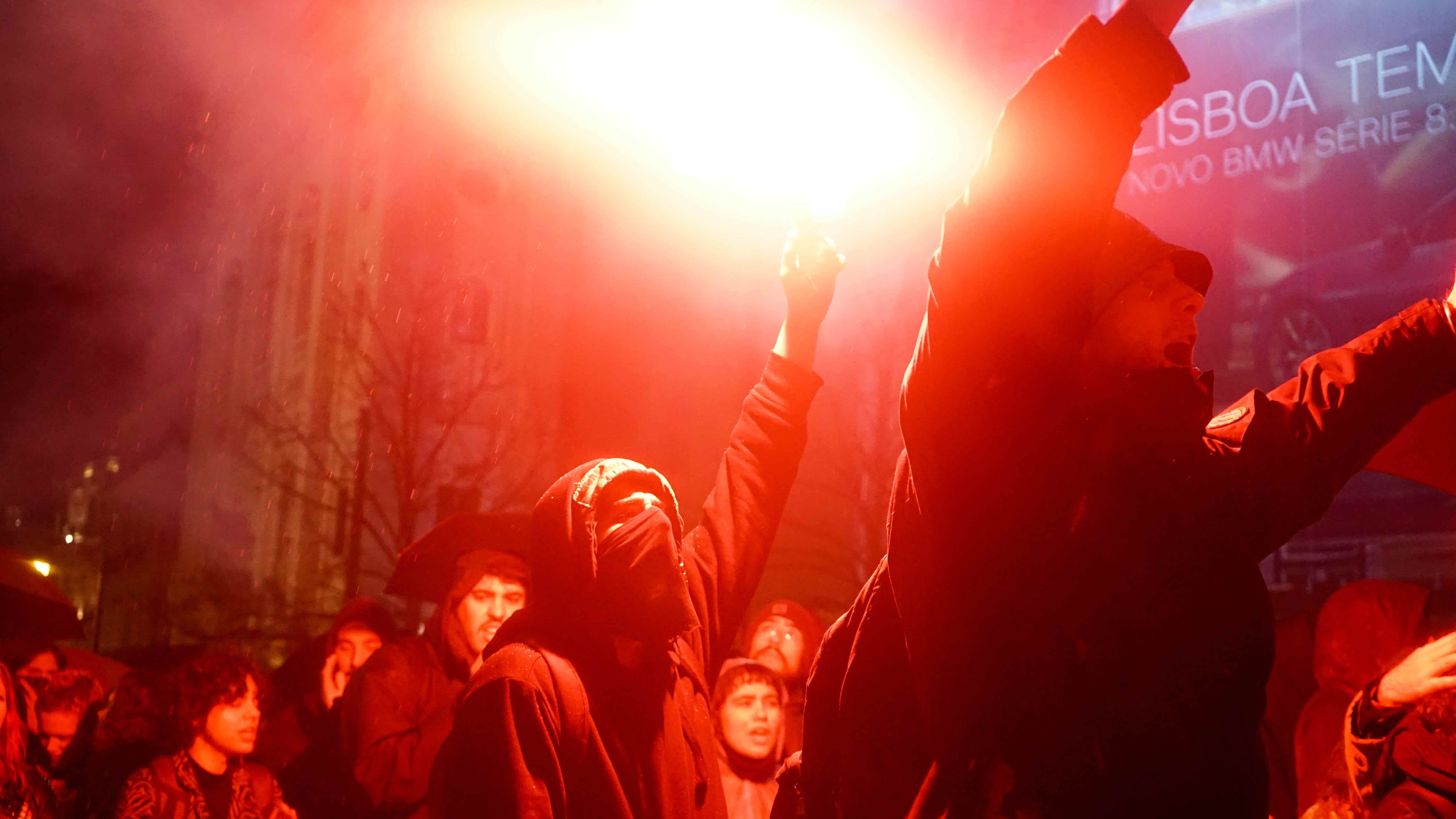 “Being here is an obligation – there is too much bullshit is around us,” added Marcus Veiga, aka artist Scúru Fitchádu. “The Portuguese police have a monochromatic vision – they see white and they see black. First, we need to stand on the ground, but it won’t end with this demonstration; the situation will need to be addressed more deeply. We will see more action now.”

As heavy thunder and lightning raged overhead, protestors waved placards adorned with the face of Alcindo Monteiro – a Portuguese citizen of Cape Verdean origin who was beaten to death in a racist attack in 1995. They chanted slogans like “fascism never again,” while the motto “capitalism feeds racism and fascism to divide us, let us not spread our neighbourhoods and enter our lives” formed part of the written manifesto.

Activist Gitelles Ferreira, who helps give a voice to Portugal’s Roma community through his Cigano-TV platform, told Huck that he had come on the march “because he didn’t have an option.” He praised the growing activist movement in Portugal, where more and more groups are joining forces to push an anti-racist discourse to the forefront of the national consciousness.

“Finally, the middle class is feeling in the flesh what we, marginalised people have been feeling for decades and centuries,” he said. “Collective questions are now being asked, thanks to work that has been going on for decades here.” 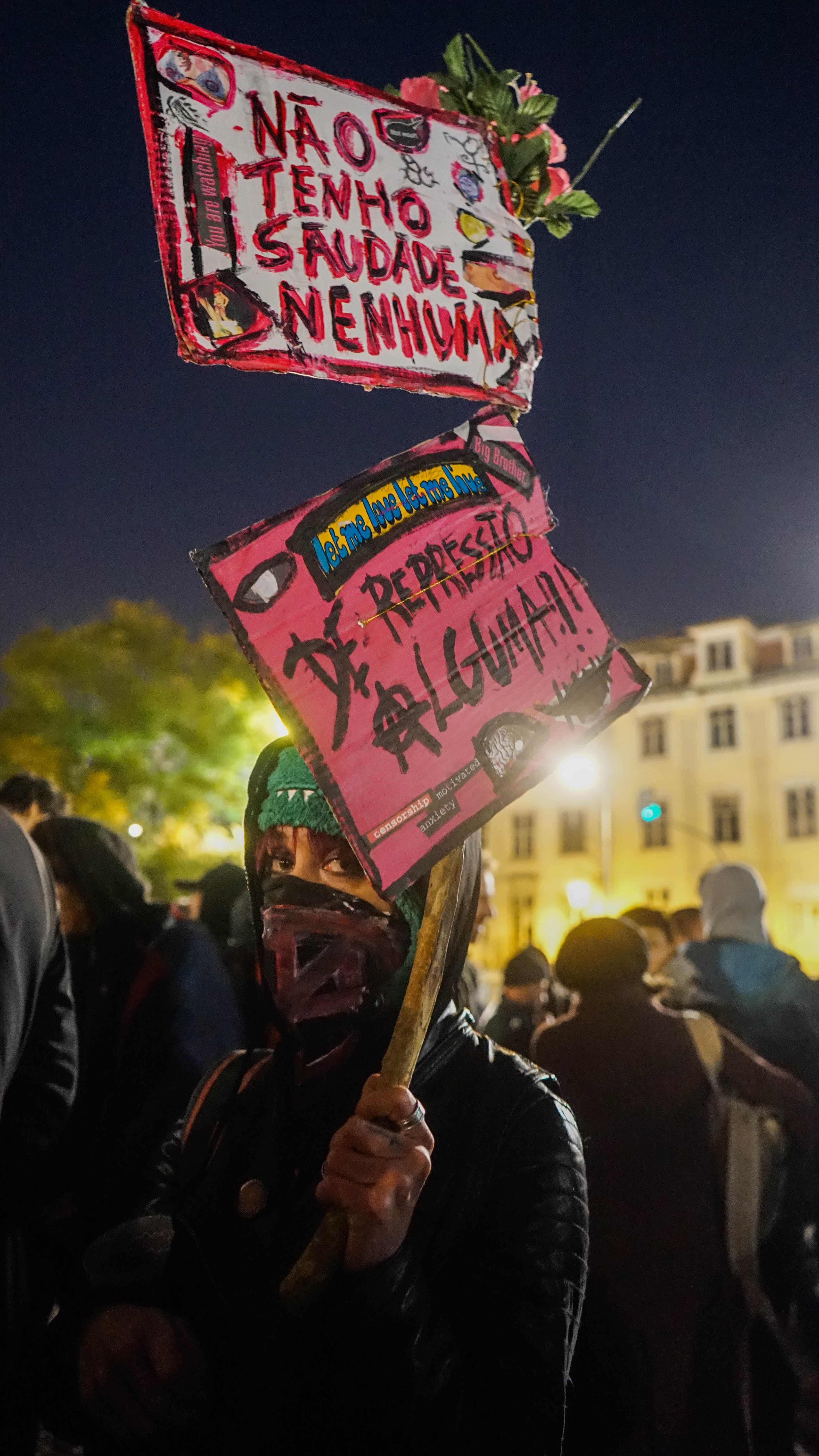 Portugal is a country with a brutal colonial past. “It’s the last part of Europe and the OG of European colonialism. Spain and France and the UK, they basically copied the Portuguese Christian colonialist method of enslaving and mass murdering people,” said protestor Maria Bruxa.

“There’s an urgent need to bring burning issues such as the role of Portugal in the Atlantic slave trade and the impact of Portuguese colonisation in the Americas to the forefront to fight this stupid myth that racism exists but no one is racist because racists are ‘the others’,” said Marta Lança, who publishes the BUALA blog – an open-access website that provides a digital platform for multiple voices from Africa, Brazil, Europe, and beyond. Lança said she feels optimism about change, “with this new generation of black people talking by their own words and voices.”

Lança and the other protestors continued their march through the rainy streets of Lisbon, with the demonstration concluding in Praça Luís de Camões – a popular meeting point in the heart of town. As Antifa banners were draped across the bronze statue of the 16th-century poet, red flares filled the crowd with smoke. Speakers tried to make their voices heard through crackly megaphones, but their messages had already been amplified by the presence of the crowd, many of whom stuck around in spite of the torrential rain. 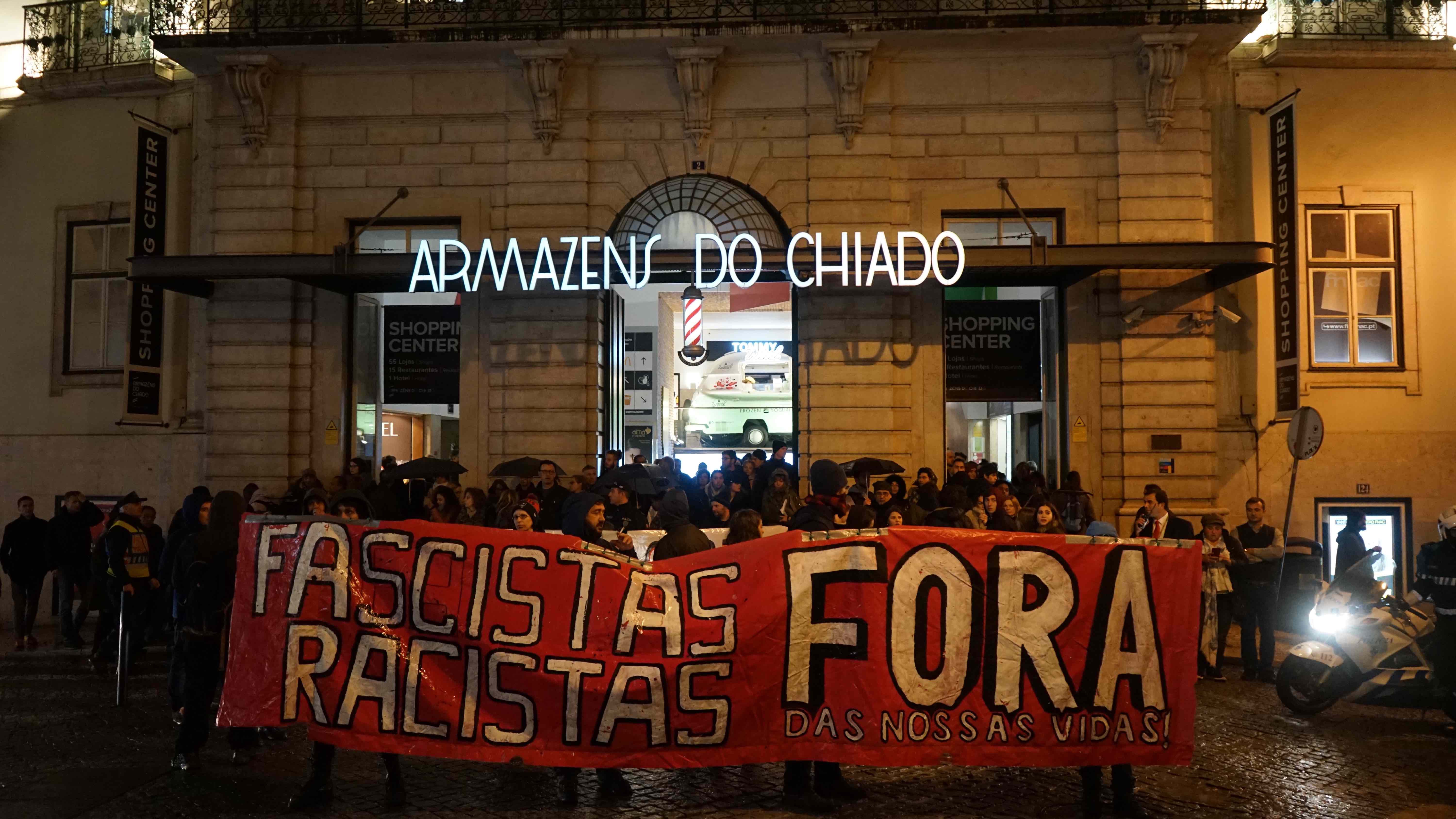 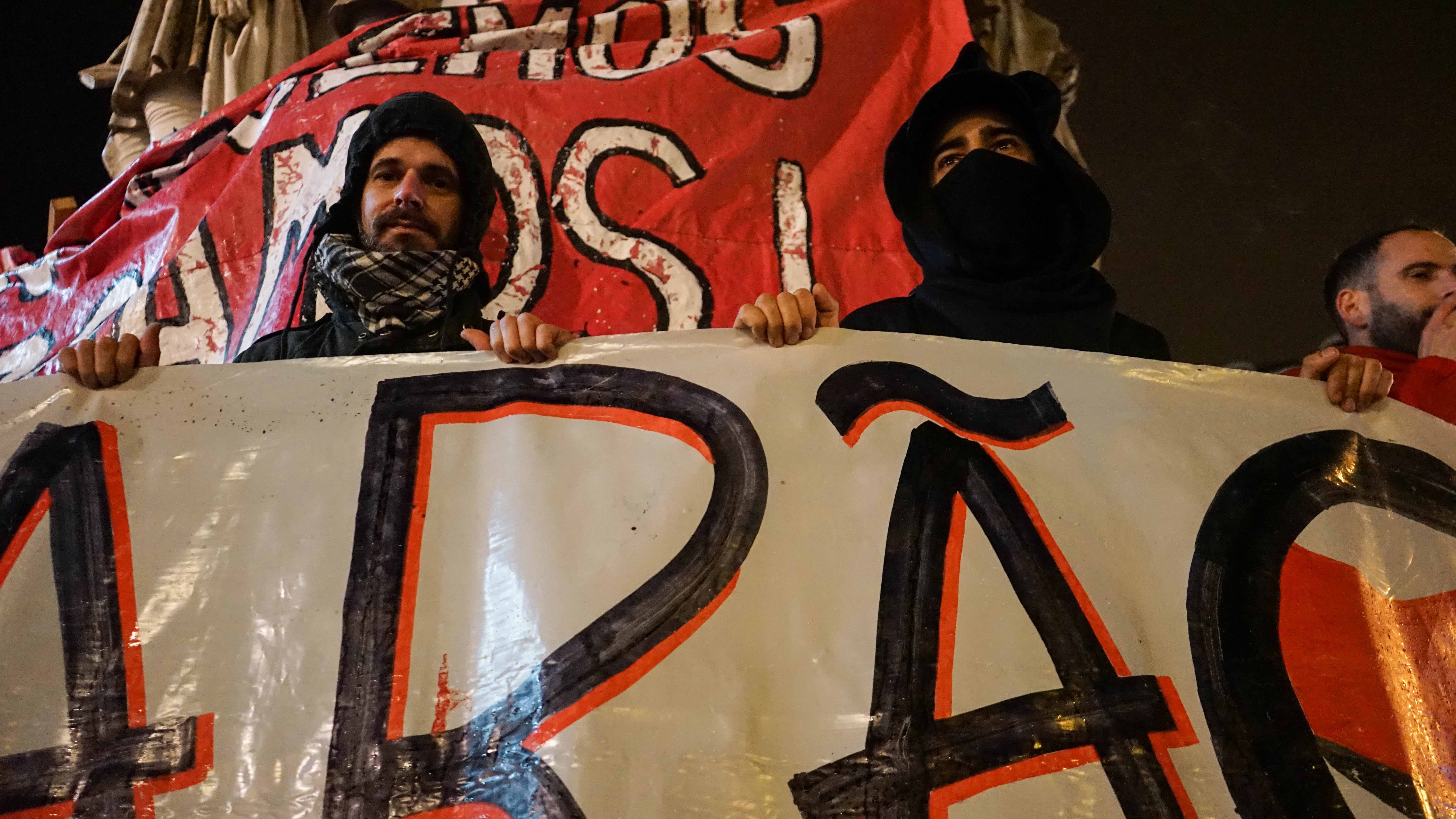 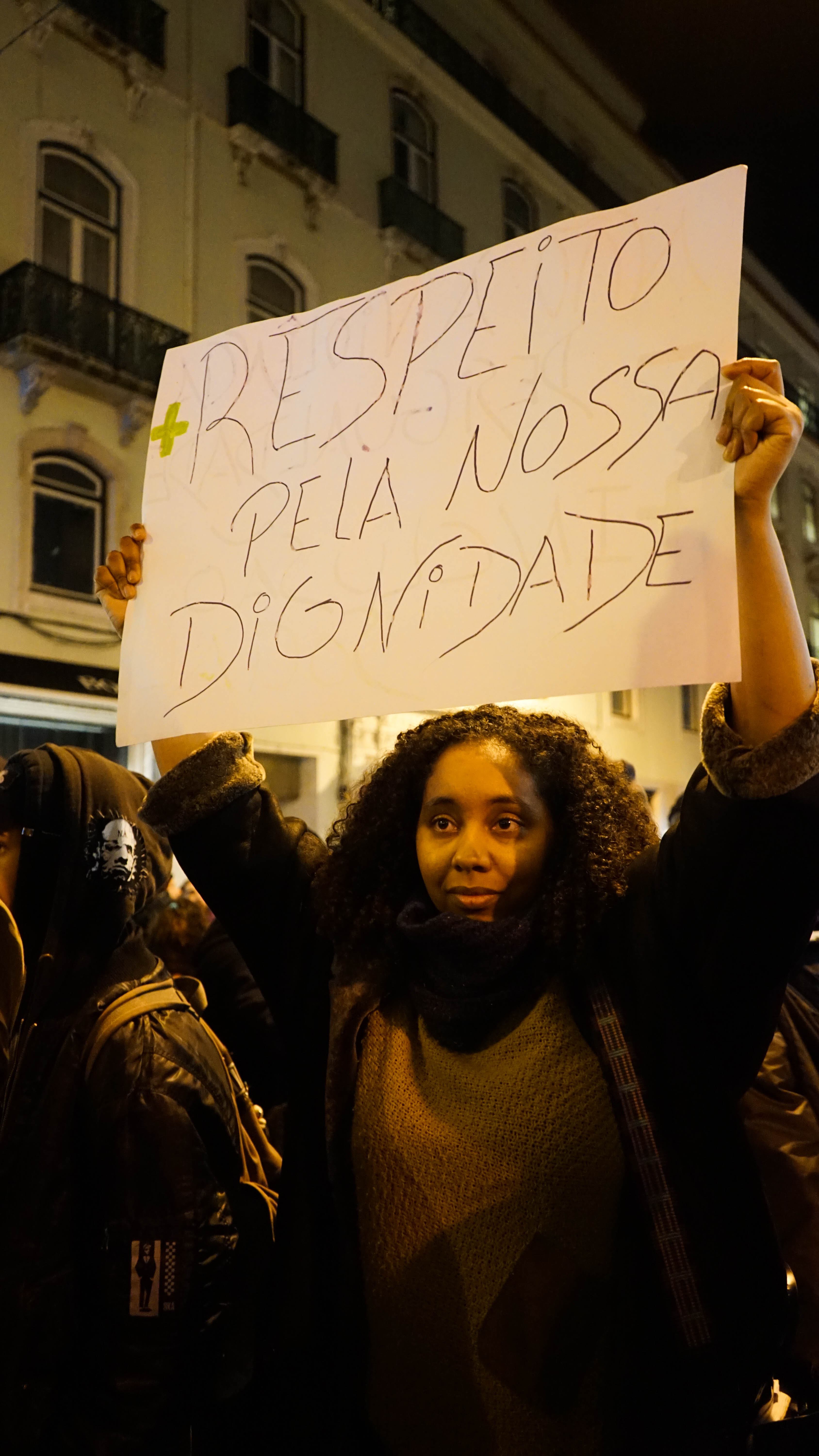 Linkedin
RELATED ARTICLES
OTHER ARTICLES
Following the release of his latest album, the rapper talks about finding a new approach to songwriting, attitudes to poverty, and why his music is more than a political statement.
Photojournalist Fiora Garenzi spoke with people still living in Eastern Ukraine, an area which seen some of the heaviest fighting since the war began.
A series of photos by the late Jerry Dantzic taken in 1957 show a tender side to the iconic Jazz musician.
Protestors gathered outside Downing Street following the latest atrocities committed by Israel against Palestinians living in the besieged strip.
The government’s brutal crackdown on NGOs has left victims of rape without anywhere to seek help. And now, as the country plays a key role is Russia’s war, things are only getting worse.
With the UK now set to run out of vaccines, people working in the sex industry – particularly outside of major cities – have been left especially vulnerable, reports Brit Dawson.