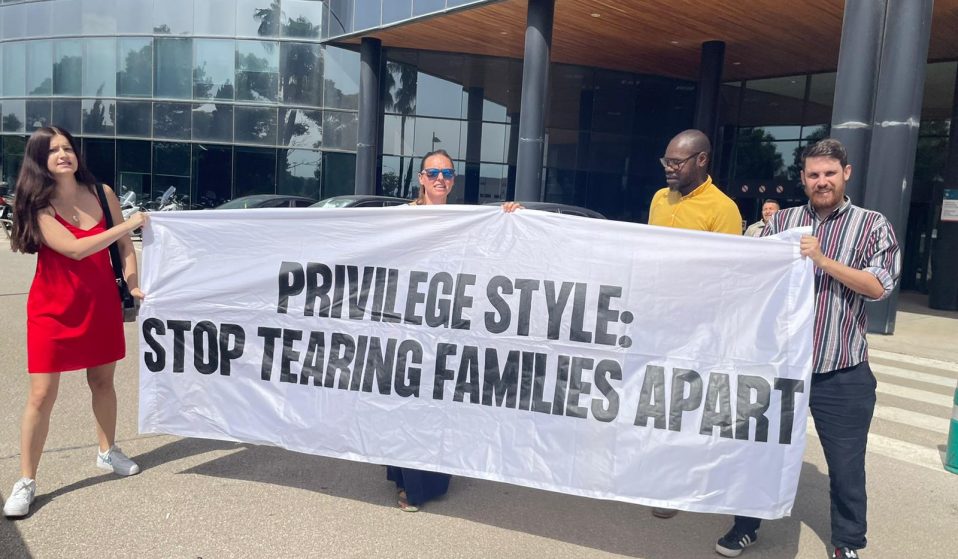 A campaign led by ex-torture survivors and refugee organisations has left the Tories with no planes left to carry out their callous scheme. They explain how the victory came about.

A campaign led by ex-torture survivors and refugee organisations has left the Tories with no planes left to carry out their callous scheme. Writer Diyora Shadijanova reports on how they won.

In early October, two protesters stormed the stage of an International Aviation Festival in Amsterdam. “I have a message for the whole aviation and airline industry,” shouted Sepideh, a torture survivor from Iran. “Privilege Style airline is profiting from the pain of refugees by taking them from the UK to Rwanda!” Then, a second protester, Kolbassia, joined in, pleading: “People need love. People need compassion.” Eyes shifted awkwardly around the room, no doubt looking for security to escort the protesters interrupting a panel discussion. After a minute or so, they were ushered out.

These were scenes from just one of the many brave actions carried out by activists hoping to force Privilege Style – the airline hired for the UK’s deportations to Rwanda – to pull out of the scheme. The pair of protesters represented the UK-based charity Freedom From Torture, which has been leading the #StopTheFlights campaign in coalition with groups including Detention Action, Care for Calais, and the PCS union. A mere few weeks following the aviation festival, the airline did just that.

“When I heard the news that we won the campaign, I was jumping up and down, and I was just so happy. It was a big task and we managed it,” says Sepideh, who is part of Freedom From Torture’s ‘Survivors Speak Out’ network. “It’s been so encouraging and inspiring to work with other campaigners.” Speaking to Huck on the phone, Sepideh says she was nervous to disrupt the festival in Amsterdam, but ultimately found the courage in knowing she wasn’t speaking out alone. The win has been energising for her: “I just feel more empowered because this fight has not ended yet.”

There’s good reason not to be complacent: as part of his leadership bid, prime minister Rishi Sunak vowed to do “whatever it takes” to make the Rwanda deportation scheme work. And, more recently, home secretary Suella Braverman shared with the public her “dream” and “obsession”: to see a flight take asylum seekers to Rwanda. It’s a dream that thankfully, for now, has been dashed.

The scheme itself was first announced back in April 2022, when the UK government signed a £120 million deal with the Rwandan government to relocate asylum seekers there and externalise migration management. This deal stipulates that Rwanda would not be an offshore processing location but instead, a permanent destination for people seeking refuge. Under this scheme, the UK’s legal responsibilities would end once asylum seekers entered Rwanda and there would be no option for them to return to the UK.

Conservative Government policy states that the scheme is “intended to deter people from making dangerous journeys to the UK to claim asylum, which are facilitated by criminal smugglers, when they have already travelled through safe third countries”. However, similar schemes have failed in the past, only fuelling the smuggling trade and traumatising people seeking safety. The scheme to send asylum seekers to Rwanda is inhumane and heavily opposed by critics, which include church leaders, and even King Charles.

Then home secretary Priti Patel had promised to send thousands of asylum seekers to the East African country as early as May, just a month after announcing the scheme. However, the Home Office hit problems in June when Privilege Style was ready to fly asylum seekers to Rwanda. The flight was abandoned due to protesters blocking the road to stop coaches from leaving a detention centre and a dramatic 11th-hour ruling by the European Court of human rights. 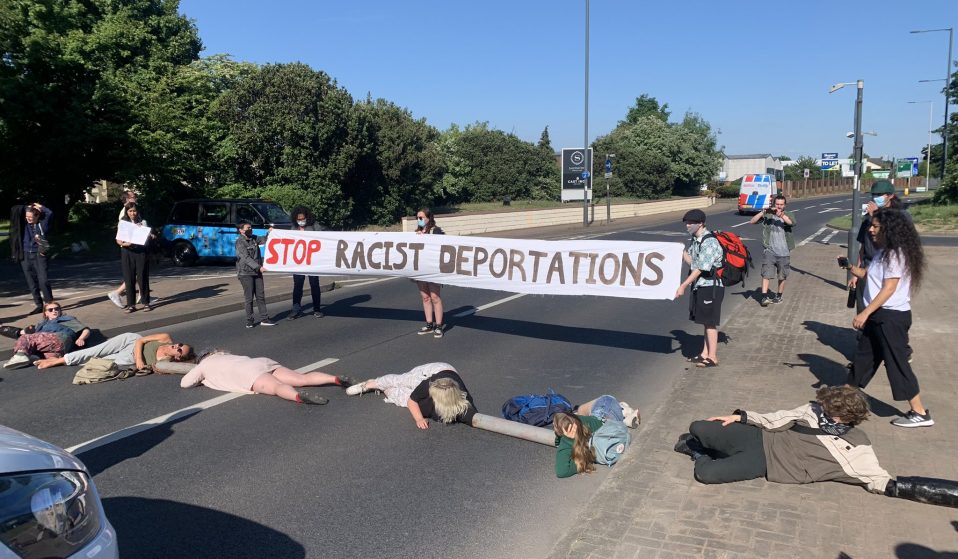 “We knew that we didn’t want to have to stop this in the courts,” says Sonya Sceats, Freedom From Torture’s chief executive. In her view, the scheme is not only illegal but profoundly immoral. “Britain, one of the wealthiest countries on earth – that has long been a place of haven for people seeking safety from torture – has decided to enter into a deal with a country in the developing world that involves exchanging human beings for cash.” She explains that this is part of a wider political strategy where instead of fixing issues in the asylum system, the government is using schemes to keep people focused on borders.

Since June, though other airlines refused to, the Mallorca-based airline was the only remaining commercial carrier willing to conduct deportation flights. Now with Privilege Style finally having pulled out, the UK government has been forced back to the drawing board on how to proceed with their goals of inhumane deportations.

“It should leave them at a dead end, we know that all of the big-name commercial carriers, British Airways and the like wouldn’t go anywhere near something like this with a barge pole,” Sceats continues. She explains that the government has been relying on much smaller operators for this exact reason. “We’ve shown that the damage to the brand of any commercial airline of that ilk that gets involved is just not worth whatever extortionate price they were commanding for agreeing to participate in something like this.” So where does that leave the Home Office? “Short of them starting to commission its own fleet of jets, we’d like to think that the wheels have well and truly fallen off this scheme and that it is dead in the water.” 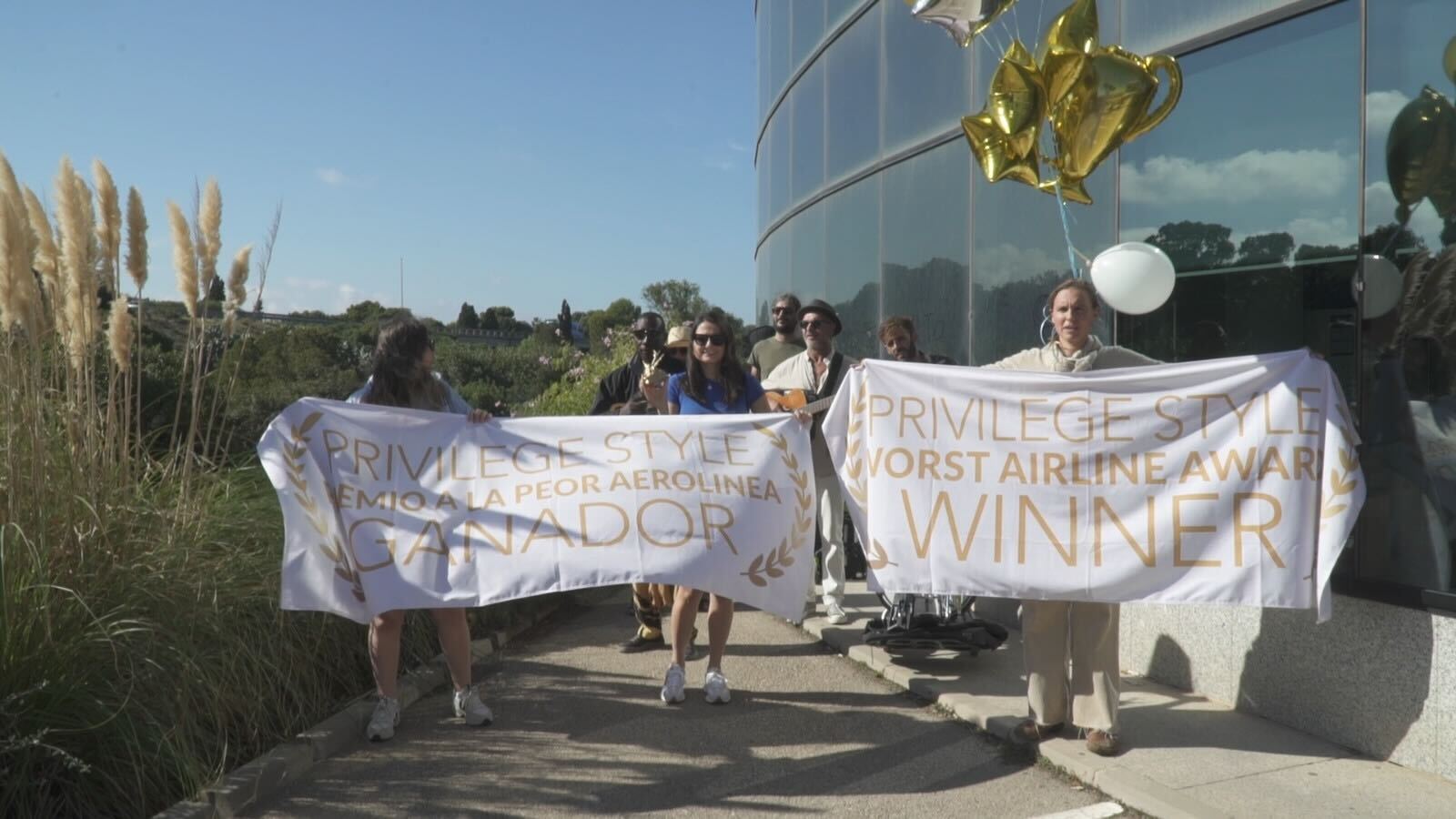 This victory brought about by the #StopTheFlights campaign was not achieved overnight. For six months, a coalition of groups created enough pressure for Privilege Style to pull out of the Rwanda deportation scheme. As well as disrupting the international aviation festival, other direct actions have included activists flying out to Mallorca to present Privilege Style with a ‘Worst Airline of the Year’ award, staging a protest outside a Real Madrid and Barcelona football match for the clubs to cut ties with the airline, as well as disrupting the Tory conference by handing attendees one-way tickets to Rwanda.

Kolbassia Haoussou, a torture survivor from Chad and a director at Freedom from Torture, is elated by the campaign’s development. “I am blown away – and as a torture survivor, it means so much to me that thousands of us did this together. People power works,” he says. “When I heard [the news] for the first time I kept asking: ‘are you sure?’”

One of his most memorable actions was travelling to the Privilege Style headquarters in Mallorca. “There was a moment of anxiety and fear,” Haoussou recalls. “We went to the territory and they could have called the police on us for trespassing. I was just thinking that if the police tried to arrest us, I’m not sure that I, as a Black man, would be treated nicely. I would be treated really roughly. That was in my mind. I was the only [torture] survivor at that action.” For Haoussou, centring the experiences and voices of asylum seekers, and getting as many of them involved in the campaign, has been key to its success. He explains that he felt more empowered in arms with other survivors. 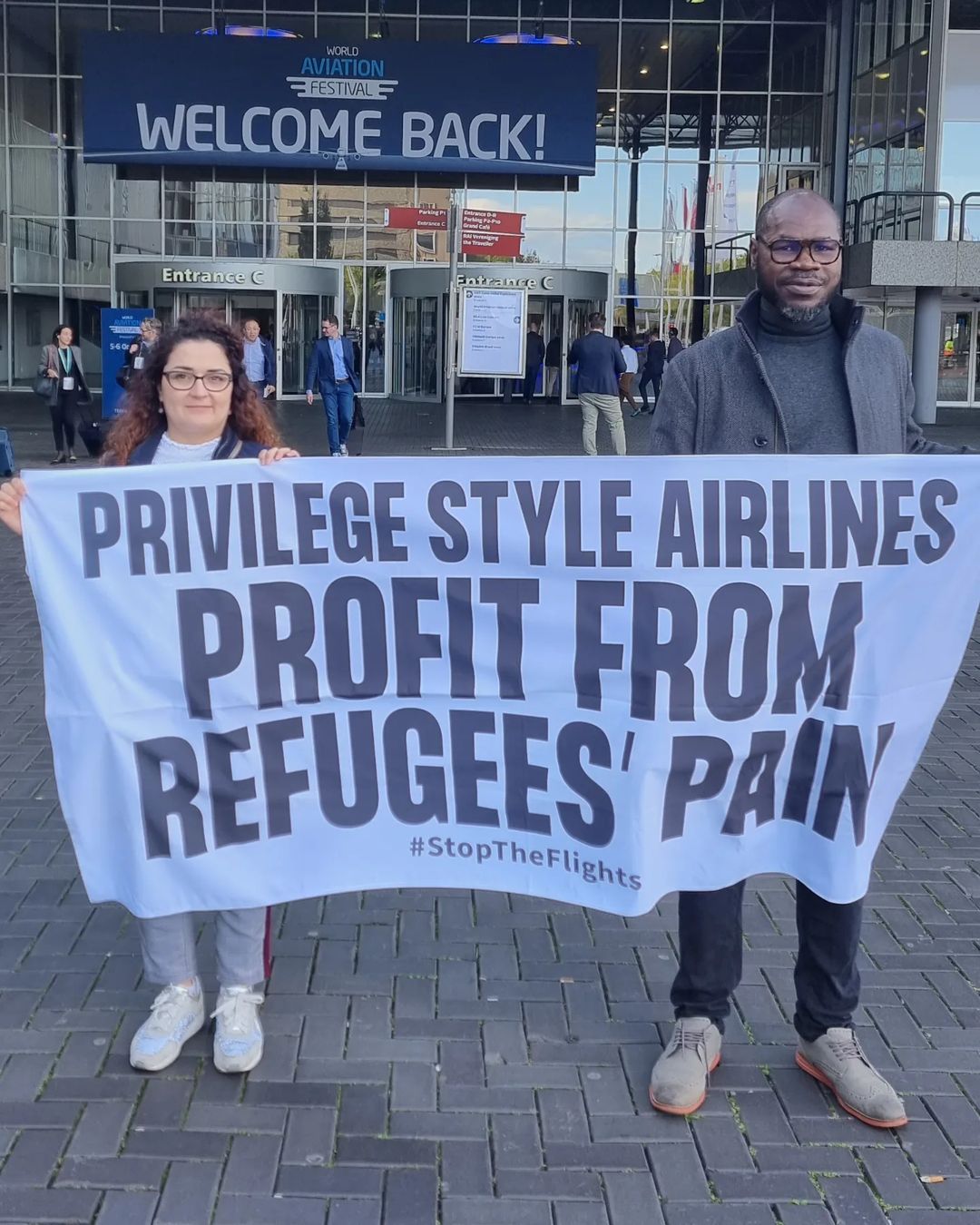 “We knew that what we needed to do was to build an enormous coalition of ordinary people coming together with impacted communities – in other words, refugees – to turn this into something which damaged any political party that tried to get a scheme like this off the ground,” says Sceats. “There have been other activist groups that have been involved in the wider campaign to stop the scheme.”

The power of the internet has also been crucial for the success of the campaign. Outside of the coalition groups working with Freedom From Torture, 16,000 people emailed Privilege Style, thousands of ordinary social media users tweeted and commented on their online posts and hundreds called them directly. There was also an open letter with over 10,000 signatures to sports teams urging them to abandon the company.

But what next for the campaign? Organisers won’t stop until the Rwanda Scheme is abandoned and the treatment of refugees in the UK improves. “[The Rwanda scheme] has been a very expensive and unsuccessful stunt on the part of the government, all the while the asylum backlog has been growing,” Sceats explains. Just this week, Huck reported on the horrifying conditions at the dangerously congested immigration centre at Manston in Kent. “The treatment of refugees in this country has been getting evermore deplorable.

“At the moment, no flight has left the ground,” Sceats continues. “There was one planned earlier in the year, but it was stopped last minute.” According to her, with the litigation ongoing, the government is likely to be tied up in the courts for a very long time. In the meantime, the #StopTheFlights campaigners are trying to make it impossible for the Rwanda deportation scheme to continue by making it a price not worth paying for commercial airlines, on whose complicity the scheme rests. “The imperative now is to make sure that this whipping up of fear and hatred about refugees goes onto the same trash heaps as the rest of the scheme.”

Find out how to support Freedom From Torture on their official website.

Linkedin
RELATED ARTICLES
OTHER ARTICLES
The photographer describes taking inspiration from Magnum photographers to craft an intimate and revealing portrait of the city.
The demonstration took place this week over plans to slash £50m from arts bodies in London.
A new documentary tells the story of an unassuming cul-de-sac of 13 timber framed houses built by Fusions Jameen – London's first Black housing co-op.
Hackney Bumps is a DIY sanctuary in the heart of East London, home to a thriving diverse community of skateboarders – and beyond.
Proponents of personality tests argue that they’re necessary to find the best person for the job – but in practise, they’re often discriminatory.
A campaign seeking to prevent future injustices where there is state involvement is gaining momentum, with Labour recently pledging its support.