News & Politics / What’s happening at Manston should horrify us all 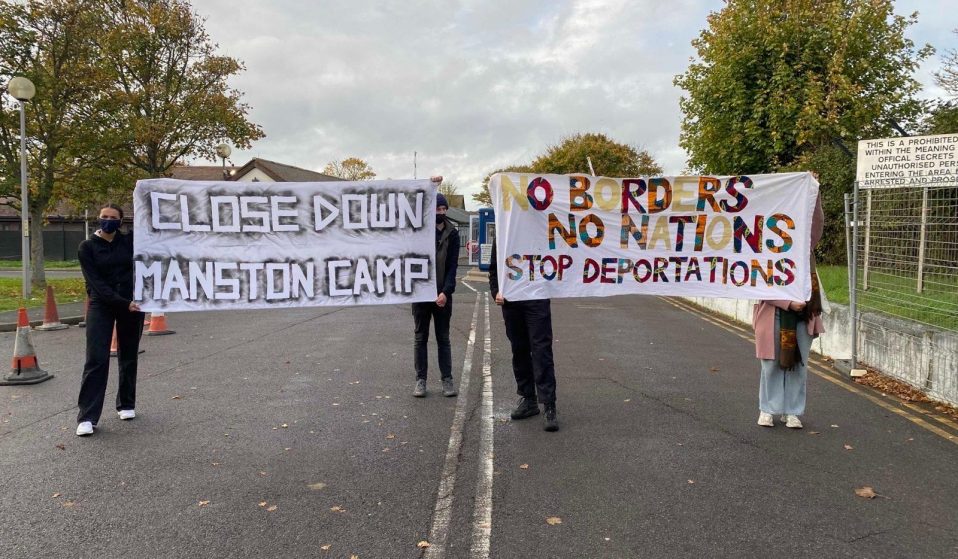 As the situation at the dangerously overcrowded immigration centre in Kent escalates, SOAS Detainee Support detail the appalling conditions they witnessed there.

On Sunday, members of various groups organising against detention and deportations visited the migrant detention camp in Manston, Kent. An ex-military base, repurposed as a secure facility to hold people who arrive in Britain via small boats, the camp has recently come to attention due to overcrowding, extended detention, maltreatment and outbreaks of serious diseases. What we saw and heard should shame this country, those in the media who have fermented hate against people who come here from other countries and those in power who have essentially created  a concentration camp in Britain.

On arrival, through several fences including barbed wire and tarpaulin sheets trying to block the view, we saw children and families inside the camp. The camp is highly securitised and isolated: surrounded by layers of fences, barbed wire, watched over by private security personnel and police; the outermost fences are covered up with tarpaulin sheets, largely preventing people from looking in and out, and covering up this shameful place. Mitie, the security company which has been subject to allegations of running insanitary detention centres, provides Detention Custody Officers to a small portion of the site, while other companies such as MTC – accused of putting children in solitary confinement and running “a bleak regime” at a youth jail  – have also been contracted to provide security. 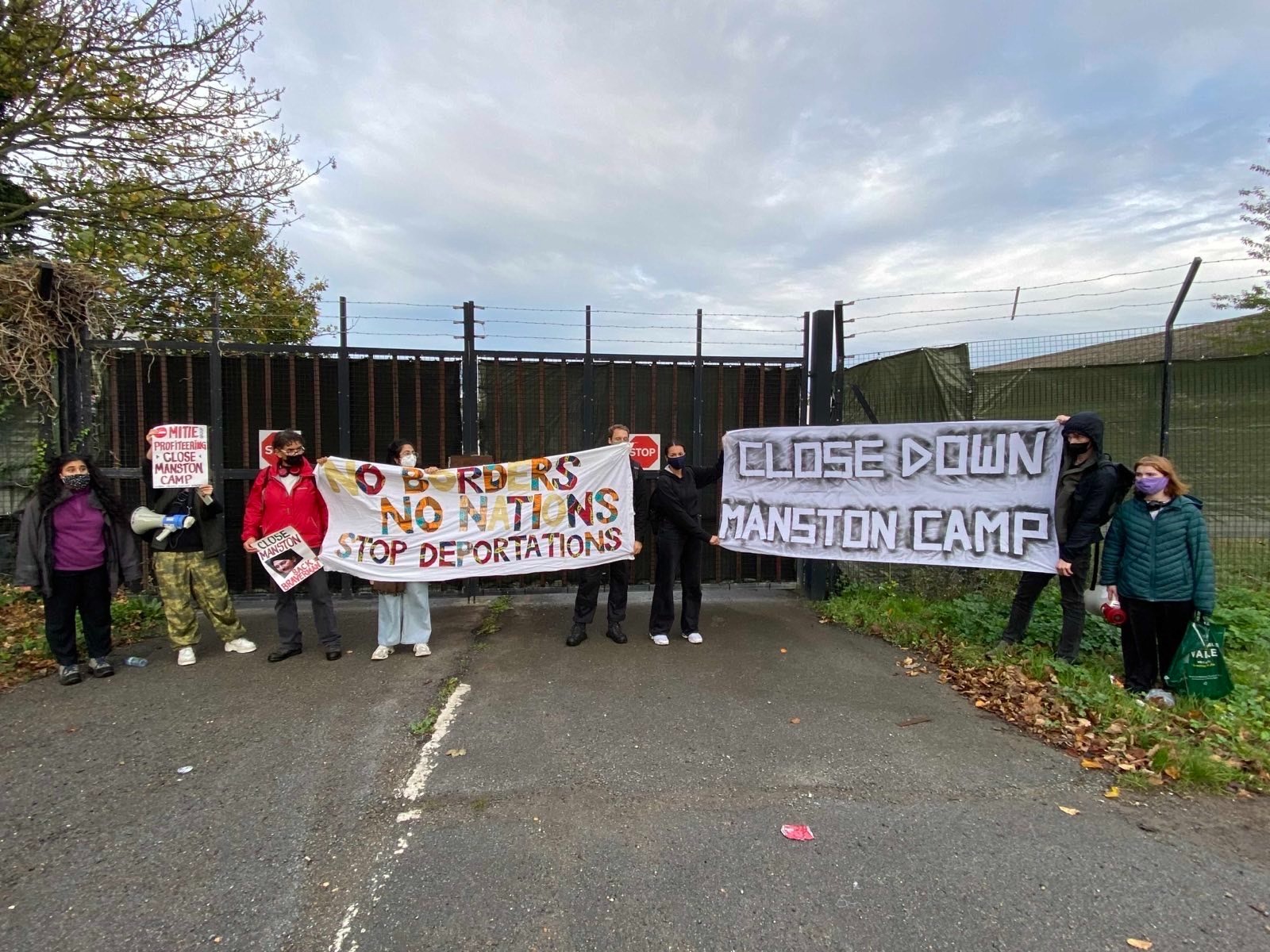 Through a gap in one of the gated entrances, we saw a father walking around holding his daughter inside a cage, unable to leave. We also saw rows and rows of blue plastic bags with identification tags, containing belongings which are confiscated from the detained people upon arrival; the dehumanising bureaucracy of this country’s detention regime. It’s been reported that detainees are given wristbands with numbers on them, and referred to only by these numbers – a chilling hallmark of internment camps throughout history.

We were able to find a vantage point to see inside the camp, where detainees saw us, and waved and shouted, calling out “freedom”. People came pouring out of a building and a crowd formed, including many children. We waved back and called out to them through a loudspeaker.

Before security forced the crowd back inside, and despite the arrival of local police, we were able to hear fragments of information from the people detained. We asked people where they were from, and they shouted Iran, Afghanistan, Syria, Pakistan, and Sudan. They told us they had been detained in the ‘temporary’ camp for as long as 30-40 days, under horrendous conditions: no access to lawyers, telephones or doctors. They told us, ”we’re getting sick” and life in the camp was “not nice”. Children ran away from the guards encircling the crowd, crawling through gaps in an inner fence and running closer to us chanting “freedom”. They were chased by security, who eventually made all the detainees go out of sight. 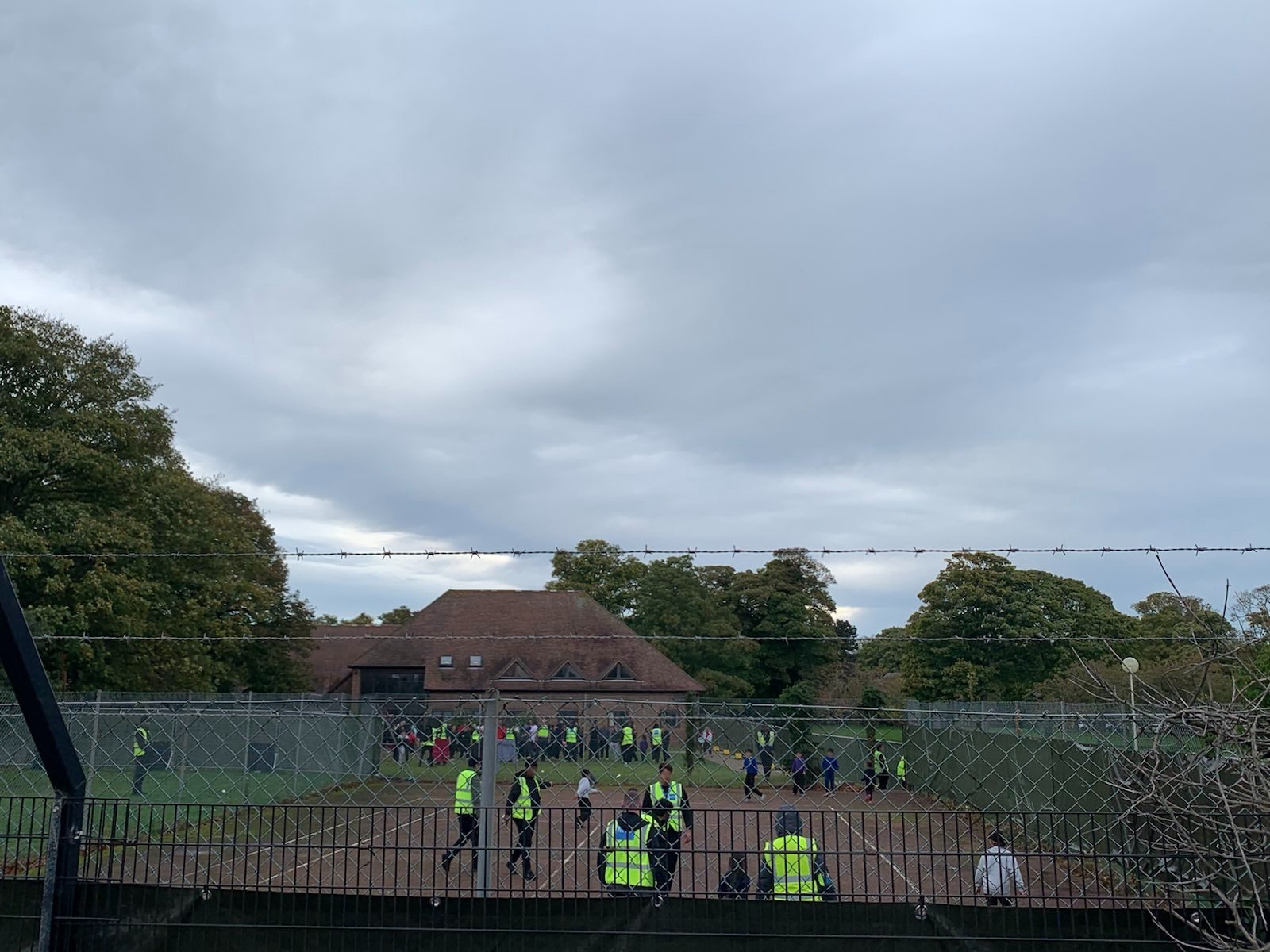 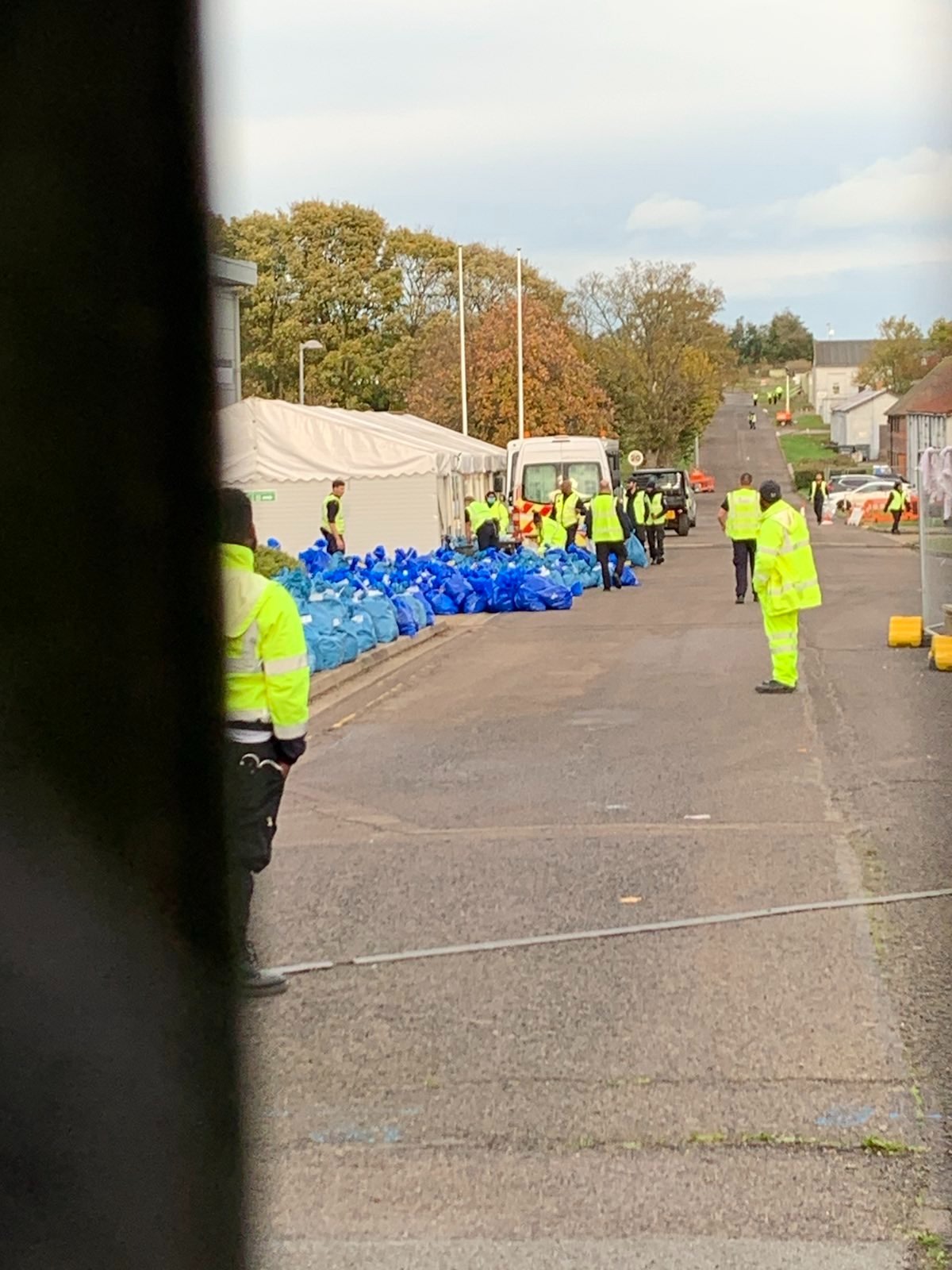 In theory, the facility is designed to hold just 1000 people, who arrive in Britain via small boats due to the lack of any government-provided route for asylum. People are meant to be there for only 48 hours. However, more than 4000 people have been held there in inhumane and overcrowded conditions. There have been outbreaks of diphtheria, MRSA, scabies and norovirus. It is a humanitarian catastrophe.

Despite the camp already being overcrowded, we saw hundreds more people arriving on coaches and buses, wrapped in white blankets. Many looked completely exhausted and spent, slumped in their seats. Thirteen full coaches and double-decker buses arrived at the camp over the course of just three hours, amounting to hundreds of arrivals. Only one coach with a handful of people, including security personnel, left during that time. We also saw the local Tory MP arrive to inspect the camp, who subsequently called it a “breach of humane conditions”. 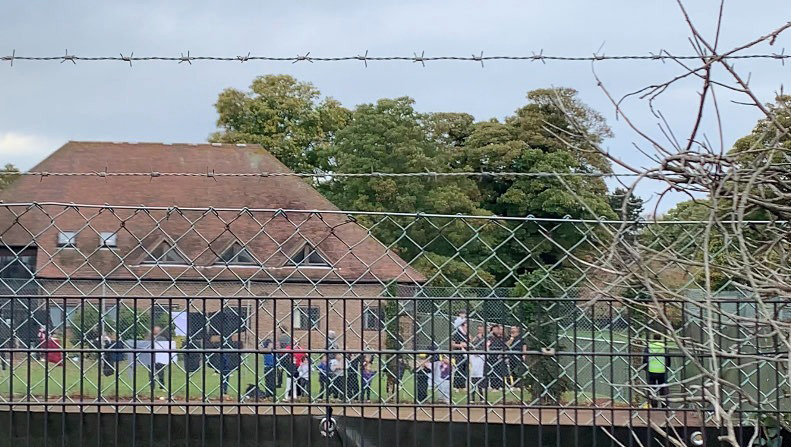 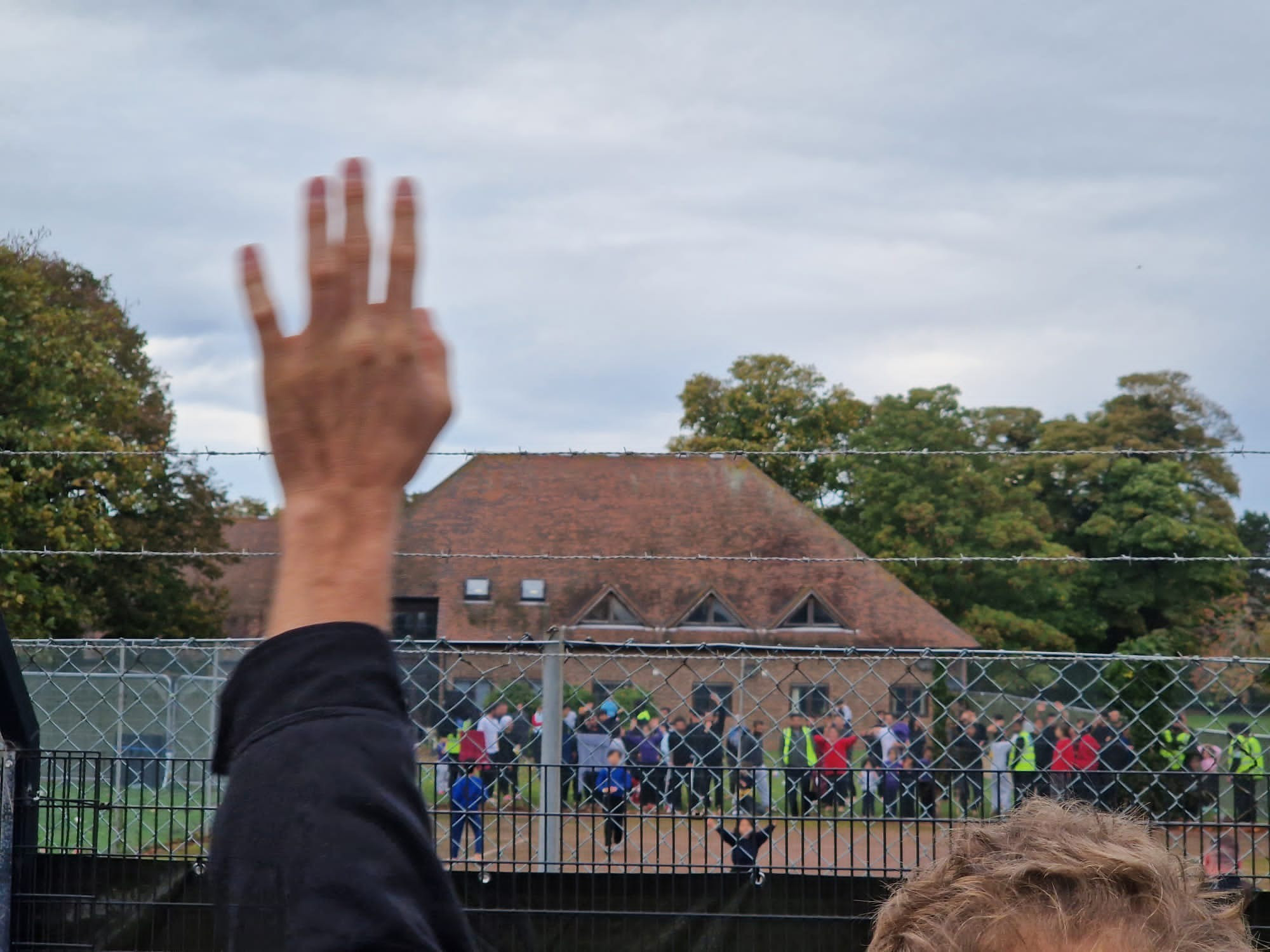 Though Home Secretary Suella Braverman has denied blocking the use of hotels for those in the camps, she also admitted that she ‘stopped the release of thousands of people with nowhere to go. It’s clear that interning people at Manston for extended periods in such conditions is a deliberate and political decision, which is effectively persecuting people who have travelled to this country to rebuild their lives. Asylum accommodation is vastly inadequate, leading to the increasing use of ‘hotels’ to accommodate asylum seekers. The ‘deterrence’ rhetoric espoused by former Home Secretary Priti Patel and now Braverman, as well as increasing pressure to make cuts to Home Office spending in the wake of the Tory budget crisis, has reportedly led Braverman to block asylum seekers from accessing temporary accommodation in hotels, leading to their extended detention in Manston.

Is that how we as a country want to treat people? People arriving here via small boats, and detained at this camp, have fled war, persecution, poverty and climate breakdown. These people have the right to settle and to claim asylum and protection in the UK. Yet under these degrading and unsafe conditions, unless they are immediately moved into safe accommodation, lives are at risk from a highly contagious disease, abuse or neglect.

The childrens’ cries of “freedom” and “we need your help” are a haunting indictment of the British border regime. Those cries will stay with us until Manston is closed and its detainees freed and taken to proper accommodation.

SOAS Detainee Support is a grassroots abolition group which attempts to break the isolation of immigration detention and supports people to take control of their cases and resist their imprisonment and deportation.

Action Against Detention and Deportation is a coalition of organisations, including SOAS Detainee Support, Global Women Against Deportations, Global Justice Now and others. We stand against deportations and detention as tools of hate, division, and a racist state.

Linkedin
OTHER ARTICLES
A centuries-old tradition is offering families a way to honour the deceased, reports Arbab Ali.
The Egyptian government are continuing the repressive mistreatment of environmental campaigners.
With the singer’s tour in full swing, we sat down the musical production company who made the electrifying show possible.
The campaigning charity are on a mission to increase inclusion, participation and representation of Black people in trail running.
After voting to strike across England, prison teachers explain why they’ve been pushed to a breaking point.
SOAS Detainee Support detail the appalling conditions they witnessed at the dangerously overcrowded immigration centre in Kent.