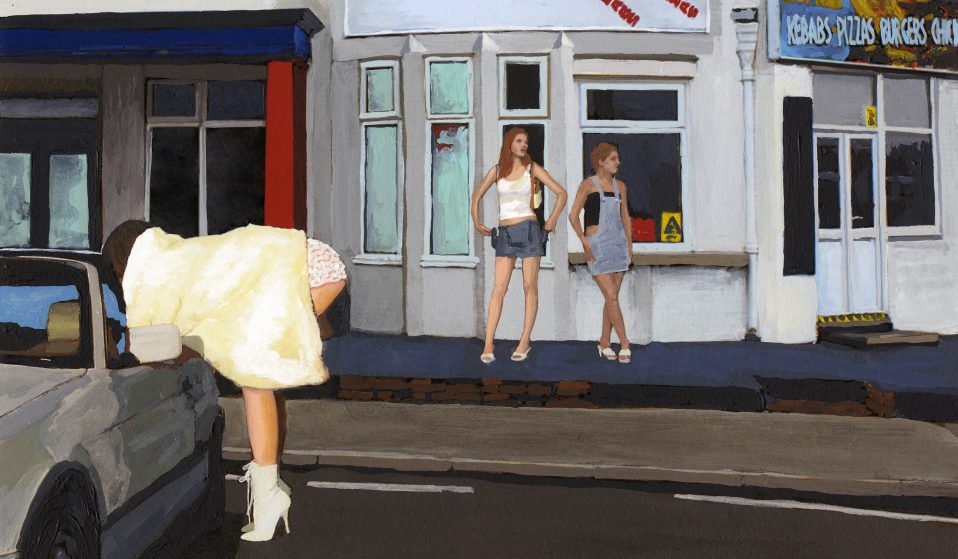 On a quiet road just off the high street, in a residential part of a British seaside town, there’s a small, unspectacular building sandwiched between houses and takeaways, its walls painted completely white. The owners refer to it as a massage parlour, but ask anyone in the neighbourhood and they’ll tell you: it’s a brothel.

“The [owners] told us when they put the sign up that if the police ask, it’s aromatherapy,” says Lydia Caradonna, a 21-year-old history student, sex worker and activist who operates out of the brothel. “They even got some oils to put in the rooms.”

Lydia has been involved in the industry for about three years now. She got her start just after leaving school, desperate to avoid the prospect of being homeless at the age of 18. “I have the sad story,” she says, with an awkward laugh. “Whereas most people have really average entries into the sex industry.”

Now based in south London, she commutes to the brothel outside of university term-time or when she needs the money, seeing clients throughout the day and into the night. There, customers can take their pick from three colour-themed rooms, all of which feature a large bed and shower, as well as CCTV and panic buttons. Clients pay around £60 for a 15 minute slot – which includes a blow job and sex – or £130 for the full hour.

After each visitor, Lydia and her colleagues bring the money downstairs and take their chunk, with the brothel owners taking a cut of 40 to 50 per cent. Once they’ve clocked off, they make their way down to the basement area where they sleep overnight. It comes complete with a small kitchenette, dining space, dressing tables and four single beds. While dimly-lit (there are no windows), the space still feels somewhat homely: Lydia and her colleagues make sure to cook, play music and eat together when on-shift.

Relaxed, warm and quick to smile, Lydia is candid when it comes to speaking about her life, regularly punctuating answers with a giggle. That openness belies a genuine attachment to sex work, one that has made her a passionate defender of it as a profession. In 2018 she co-founded DECRIMNOW, a grassroots organisation that fights for the full decriminalisation of sex work in Britain. The group is currently at the forefront of a movement pushing back against government plans to ban online advertising of sexual services in Britain. 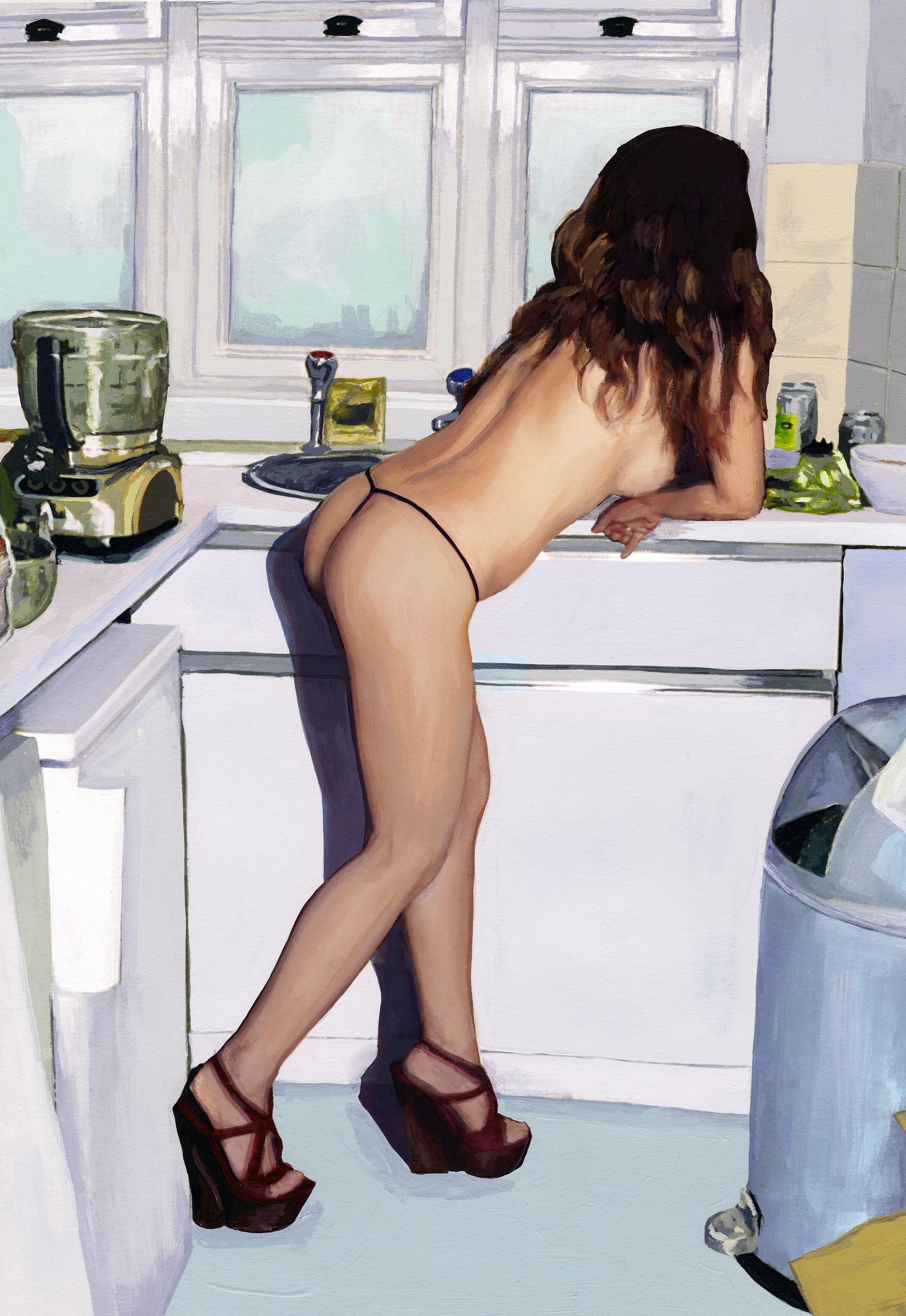 Even though sex work itself is currently legal in England, Wales and Scotland, everything surrounding it is not: soliciting in a public place, kerb-crawling, pimping, or simply having two sex workers operating in the same room – even if they’re just keeping an eye on each other’s safety. This effectively keeps the British sex trade taboo and off-radar, much like the brothel Lydia works from.

UK politicians have recently considered adopting rules inspired by legislation in the US known as ‘FOSTA-SESTA’. Signed into law in April 2018, it bans websites from hosting ads for sex, swiftly shutting down Backpage – a classified listings site sex workers used to advertise – and forcing Craigslist – the internet’s original classifieds site – to retire its ‘Personals’ section.

While some argue that the new law would help curb sex trafficking, Lydia argues that FOSTA-SESTA removes a vital resource. She believes that these websites provide a safety barrier for some of society’s most vulnerable women, who use them to safely advertise their services and screen clients. Losing that would mean turning to more dangerous ways of finding customers, risking being exploited, abused or killed in the process.

“I did a handful of client visits before I established that it was not for me and that I was [more] comfortable resting on video income,” he says in a warm, husky drawl during a Skype call on his lunch break. Throughout the conversation, he’s keen to articulate his studies, sending over relevant links mid-discussion, only pausing to occasionally poke fun at his long-winded answers.

Dale has seen his share of struggles during a five-year stint as a sex worker, all of which could have been prevented with adequate online protection. He remembers how, during one in-person visit, he drove for over an hour to Washington DC, alone, only to be stood up. It later transpired that the hotel room his client ‘booked’ didn’t even exist.

Dale puts that experience down to naivety, but his story illustrates the potential consequences of what can happen offline when what sex workers can do online is restricted. Sex work confined to the streets is statistically more dangerous, with women more likely to be the victims of client violence. In the last year, reported crimes relating to pimping and sex trafficking in San Francisco have more than tripled, while loitering arrests in New York increased more than 180 per cent in the first 10 months of 2018. Dale believes the increase in charges aligns with FOSTA-SESTA. “It’s not like shutting [these sites] somehow stops human trafficking. It just pushes it underground where nobody can see it.”

The prejudice against sex workers stems from a misunderstanding of an industry that has just as many pros and cons as any other. While exploitation does exist within the sex industry, activists are keen to draw attention to the fact that many enter it consensually or because other options have failed them.

Lydia believes that the role of Britain’s unstable economic conditions often gets overlooked in the equation. She’s seen how benefits sanctions, cuts and other austerity measures push more women into the industry than other factors typically cited by critics.

“I was making myself ill, carrying boxes up the stairs for stupid money,” she says, referring to the old, £5-an-hour retail job she worked while suffering with a chronic illness. “In lots of ways the sex industry is less exploitative than that. I am making a good amount, I can pick and choose when I work, and the majority of clients are respectful. But if we lose advertising, we can’t work for ourselves. All the tools we had to survive with are just gone.” 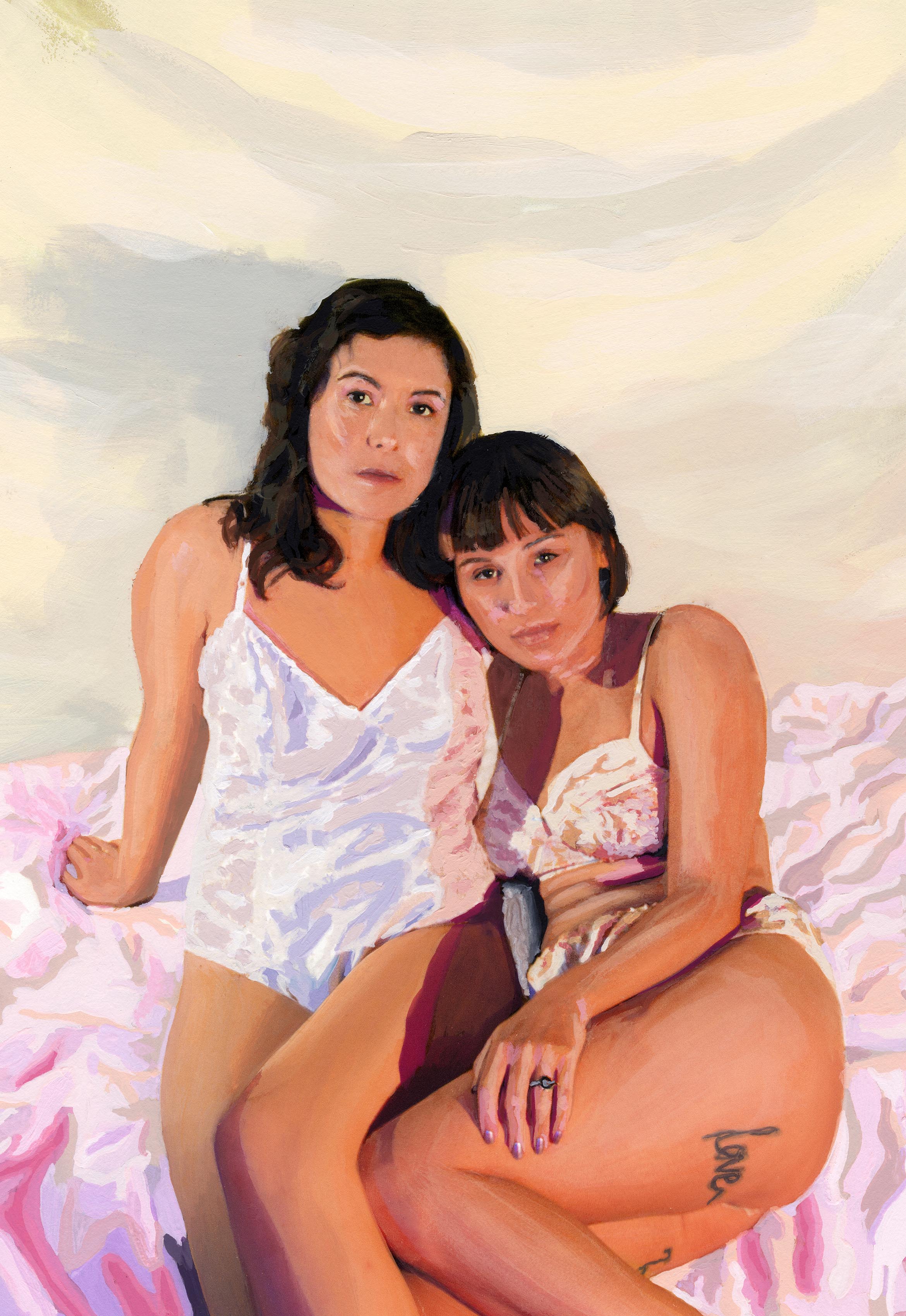 The two friends – both porn directors – are high-energy and easy to get along with, comfortable discussing weighty subjects such as the culture of censorship they see sweeping the internet. “We’ve had posts removed, our account removed – my backup account got removed as well,” says Reed, whose short, choppy hair flicks rhythmically from side-to-side when she speaks. “The fact we can’t talk about it openly on social media is making sex a completely taboo subject.” (Since the interview, Come Curious has been removed from YouTube’s Partner Programme. The channel has also been demonetised, meaning that the pair are no longer earning from their content.)

“It’s like accounts are being targeted by an army of people who are really anti-sex stuff,” adds Florence, who’s wearing a t-shirt that simply reads: ‘Inappropriate’.

Back in 2015, when Reed was too mentally unwell to hold down a job and couldn’t claim government benefits, she started working three days a week at a London-based cam site called Studio66. “If [that income] was taken away from me, I would lose the flat, wouldn’t be able to pay my bills, wouldn’t be able to eat.”

So what happens next? The answer, activists say, is to simply decriminalise the trade altogether. Through DECRIMNOW, Lydia is pushing for the ‘New Zealand Model’, which makes it legal for anyone over the age of 18 to sell sex. Since 2003, street work is legal there – as is running a brothel – and the safety of individuals is solidified through employment and human rights. A subsequent review of the law by New Zealand’s government found that sex workers were “better off” and that the industry did not grow in size as a result of decriminalisation.

From there, Lydia wants to unionise. Alongside other exploited workers, London’s grassroots sex worker collectives are pushing for better, safer working conditions – including free safe-sex supplies, protections against exploitation and a base rate for brothel workers that’s in line with the London Living Wage. “Our circumstances are exactly the same as any exploited worker, but we’re not respected as workers,” she says.

At the moment, even if Lydia doesn’t see any customers while on shift at the brothel, she still has to pay a £10 “house fee”. There are no sick days, and her manager is known to kick people out in the middle of the night if they refuse to take a client. “If we had [decriminalisation], I would have been protected by labour law. And if [my boss] had tried to fire me or anyone else, they wouldn’t be allowed to.”

For Lydia and her fellow campaigners, the future of British policy relies on those in power seeing sex work as a legitimate form of employment. They’re living proof that it can be a lifeline for many and, despite its downsides, deserves to be treated like any other line of work in the eyes of the law.

“Before I was in the sex industry, I had 60 packets of ramen noodles, absolutely no money left in my overdraft, and no other source of income,” says Lydia. “I felt like I was going to die. Had I not entered the sex industry at that point, I’m not sure I’d still be alive.” 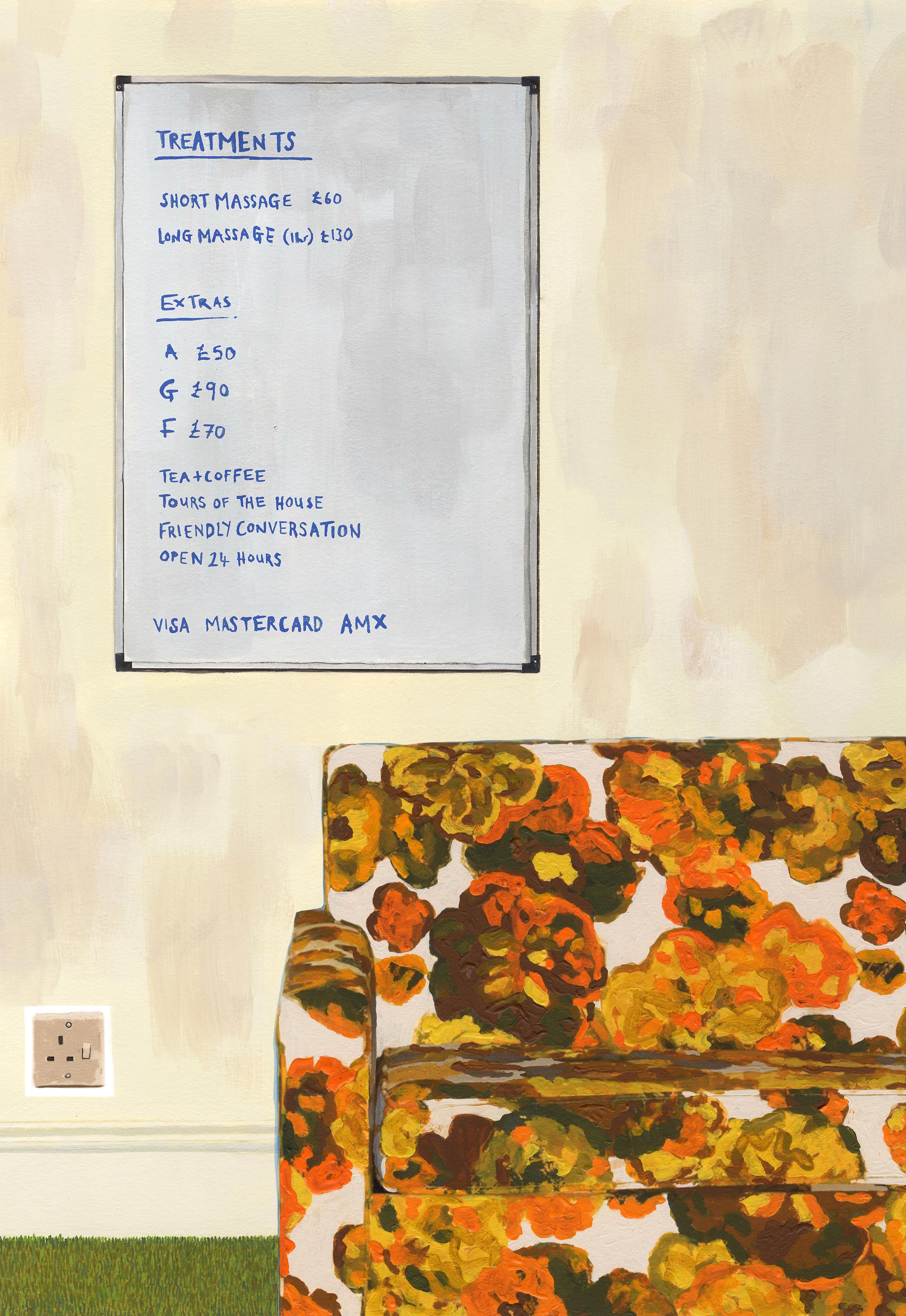 This article appears in Huck: The Hedonism Issue. Get a copy in the Huck shop or subscribe to make sure you never miss another issue.

Linkedin
RELATED ARTICLES
OTHER ARTICLES
Following the success of her debut novel, the Tottenham native is restating her commitment to the place that made her.
Satirical culture in the UK routinely protects the powerful and punches down. It’s time people stopped laughing along, writes Elia Cugini.
From the Yakuza to a biker gang, Bruce Gilden recounts capturing Tokyo and Osaka in the ‘90s.
To mark the anniversary of the mass trespass of Kinder Scout, a group of hikers came together with the intent of creating a new, fully inclusive culture for rural spaces.
The author discusses her blistering new novel about history, revolution and queer love.
The situation in Afghanistan remains dire, with many groups facing persecution at the hands of the Taliban.