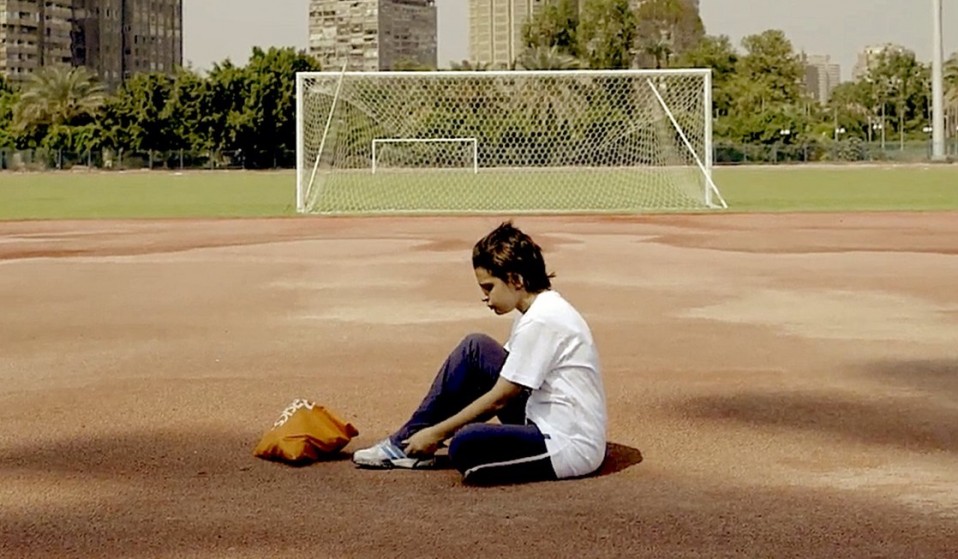 From standing on the frontlines at Tahrir Square to rallying against the patriarchy, Amal became a revolutionary when she was just a teenager. Now, her steely determination is being celebrated in a new film.

From standing on the frontlines at Tahrir Square to rallying against the patriarchy, Amal became a revolutionary when she was just a teenager. Now, her steely determination is being celebrated in a new film.

For most 14-year-olds, the daily routine probably involves a combination of school, lingering outside the local sweetshop with friends, several hours of social media and maybe an early morning paper round. It isn’t quite as common for teenagers to protest against a corrupt government and get beaten by state police. But that is Amal’s story.

During the Egyptian uprising in 2011, Amal camped out in Tahir Square in the revolution that led to the removal of Hosni Mubarak as president. She survived violent clashes and brutality from the authorities, even though she was still too young to vote for the new president.

Director Mohamed Siam filmed Amal for six years following the revolution, shooting a documentary that captures what it’s like to grow up in the midst of political unrest. Named after its female protagonist (whose name also means hope), Amal is an unflinching portrait of a young girl not only fighting against a corrupt government, but also the patriarchy that says she shouldn’t get involved.

One of the most insightful moments in the film is when Amal says: “If I acted like a girl in the revolution I would have been useless.” There is irony in her fellow male protestors telling her what she should wear, and how to behave because “she is a girl” when they are fighting for freedom.

Recently winning the Youth Jury Award at Sheffield Doc/Fest, Mohamed Siam speaks to Huck over the phone, explaining how he produced a film that resonates with young people all over the world.

Did you know Amal before filming?
No. I was interested in this group of young people that were involved in the revolution known as ‘the Ultras.’ They are football hooligans and they played a big role in the revolution. So, I was looking for a character in this group and to begin with I followed a few other people – they were male because 99.9 per cent of the Ultras are male. I met Amal by accident, and as soon as I met her I completely changed my mind about my film. Originally, I was only going to film for a year, and it ended up being a story that lasted six to seven years focused on one person. Amal made me change my mind.

What’s unique about the Ultras?
The Ultras are quite particular because they are very passionate and angry. When they vandalised things, they really went for it and could cause a lot of harm. Sometimes they would cut out the road or a bridge and stop the whole movement of traffic. The protestors didn’t do that, which was why the Ultras’ voice was very distinctive. Protestors could be anyone – street children, school children, angry teenagers – but the Ultras had certain methods. On the frontline it was very mixed, you could turn around a find someone from the Ultras, and on the other side it was just normal protestors.

At the start of the film, Amal talks about her boyfriend who died in the Port Said football clashes. Is this level of violence unusual in Egypt?
No, it’s not unusual but it was very horrible because it happened to adolescent boys in a few minutes. In about 10 minutes we lost 72 teenagers or something like that. It was horrific, but I can’t say it was abnormal. In the revolution, within a few days, a few thousand were killed and many hundreds went missing. We don’t know what happened to them. Some were found in hospital, some were found beside highways and places like that. Port Said was distinctive because we lost so many young people in such a short time and it was in a stadium too – it wasn’t a line of fire or anything – it was a football match. 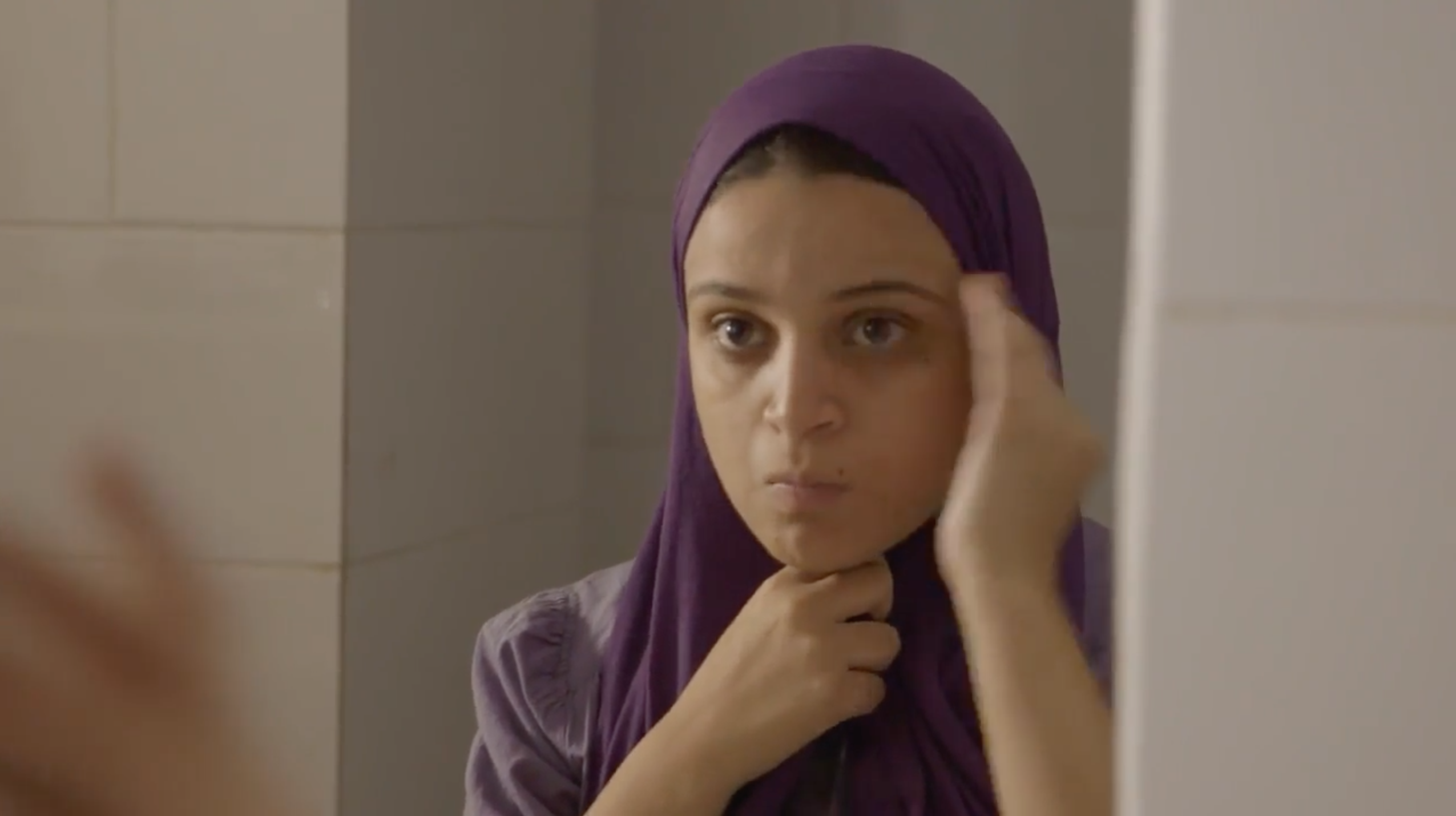 How much were you involved in the revolution?
I lived very close – literally two blocks from Tahir Square. I was there with all my heart, and even when I tried to take a break from it, I couldn’t because I lived so close to it. There was smoke gas everywhere and there was so much happening I couldn’t avoid it. I shot all of the events that happened during the revolution and for three years afterwards. I filmed all the events – big and small – some protests, some battles.

The film is very specific – but the themes are universal – what issues are you trying to address?
It is difficult for me to clearly say what the film is about – it is about many things. But, the main issues are generational conflict and how the younger generation is trying to liberate itself from powers like the family, the state, the police or – if you’re a woman – from males.

Is Amal a unique case? Were there many women involved in the revolution?
She is unique because of many things, and she is special because she was born in the midst of change in Egypt. She grew up at a time when the country was trying to alter and find its identity. Amal has this amazing capacity to survive, adapt and somehow cope with a madness that is not normal in any part of the world. In the revolution, there were lots of women and girls, but she was one of the only girls in the Ultras. I think there were only about five women in the Ultras.

I think one of the most unfair things that came out of the revolution was that even though women went shoulder to shoulder with men, when it was over women didn’t take their place in parliament. Men – or at least the system – tried to put them back in the kitchen or where they thought they belong, which is absurd. 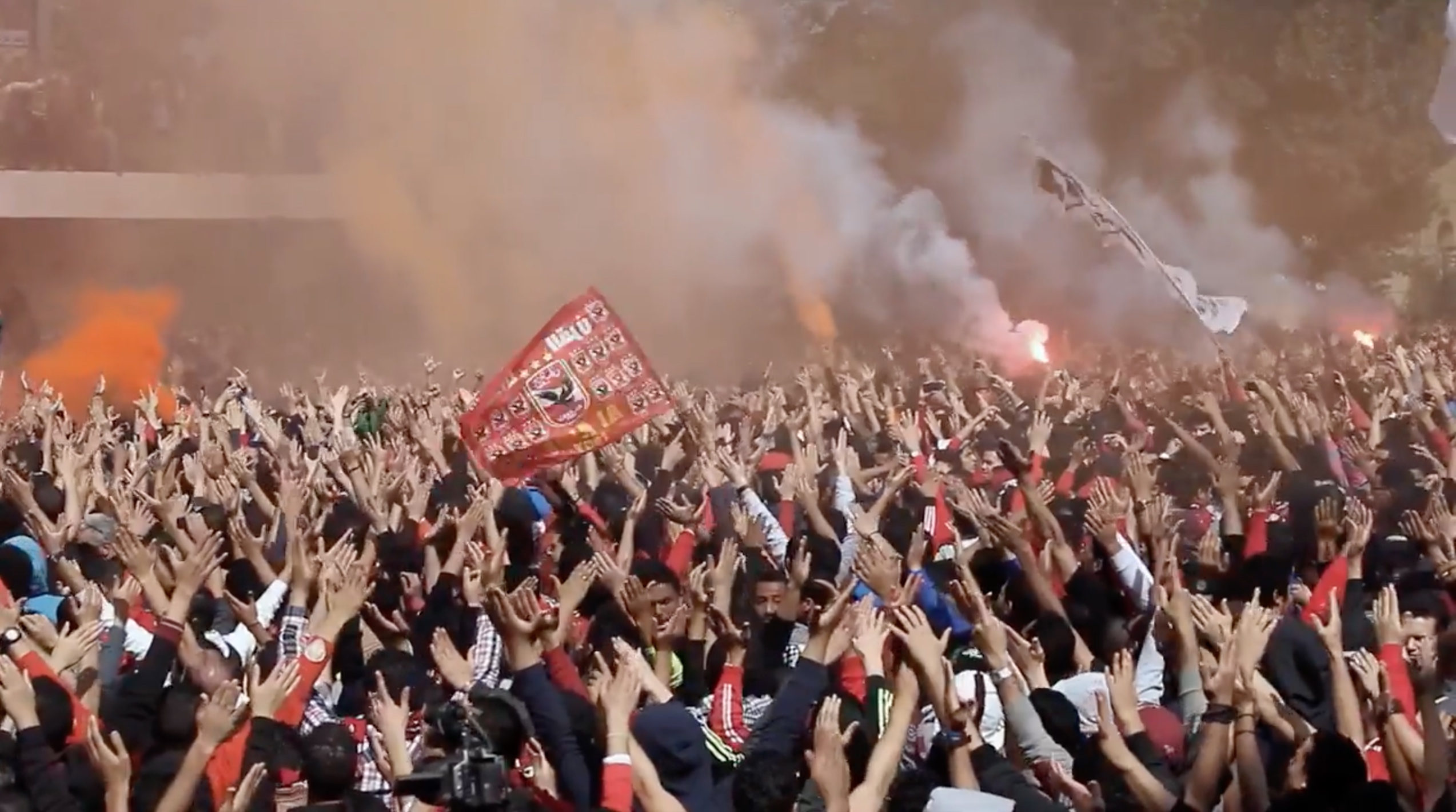 What progress has feminism made in Egypt, if any?
I think the main progress that happened after the revolution was social, not political. The state cracked down on feminist groups, but they are still out there. During the revolution, they proved they had a distinctive voice and that they will be vocal. If we are looking at Amal and her story, her struggles demonstrate how strong the system is and how difficult it is for this younger generation to find their place in their own country. There are extremes everywhere – from the police to the Muslim Brotherhood or fanatic groups – all these extreme voices are the ones that are in charge of the country. It’s really difficult, bordering on impossible to find your place in Egypt, which is why the best of the young generation are leaving to Europe, Canada or the States. I am an example of that too. Amal’s decision to stay and join the police is very brave and audacious. She has a zest for life and her ability to cope and survive is so strong. I am impressed with her.

Amal says ‘If I acted like a woman in the revolution, I would have been useless’ – what does she mean?
She is talking about fear, and about proving that she is not less than any of the boys. I have seen her fighting – we fought together – and we’ve been through really horrible things. She is really fearless, and I agree with her, she isn’t less than any of the boys or macho men she was surrounded by. I think her idea of being a girl was being afraid of fire or that something might hurt her.

At the end of the film, Amal discusses joining the police – why? Is it an inevitable part of settling down or is she just changing tactics?
I think it is definitely the latter. She is smart enough to realise that if she tried a fraction of what she did in the square now, she’d be gone – and maybe even her family too. So, I think she is changing tactics, but I also think it’s time to play a different game. There’s a song at the end of the film that expresses this. We used to put all our energy into one type of activity, but now we need to play another game and it looks very different. 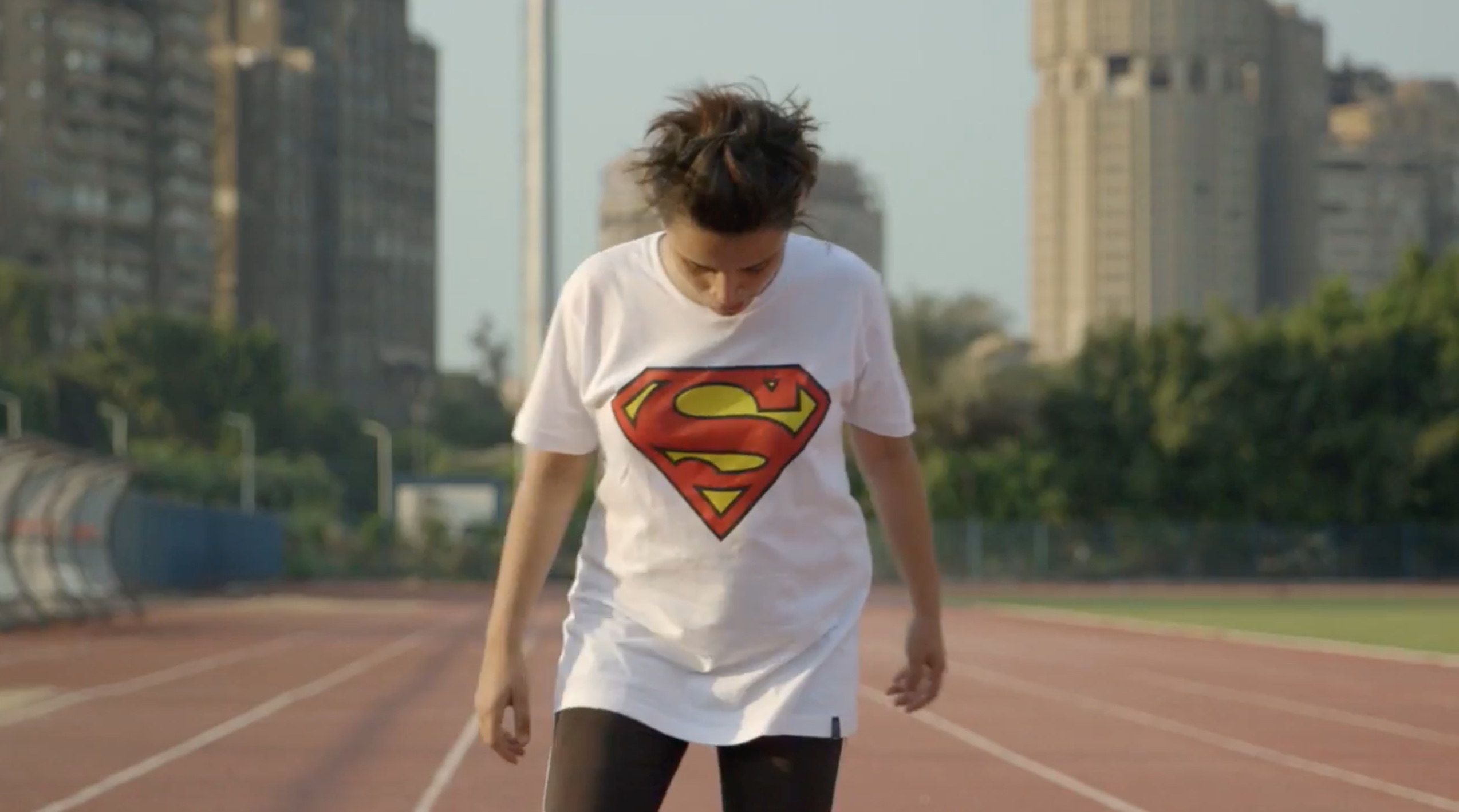 Her dad had a huge impact on her, he said ‘do whatever you want, have no fear.’ Do you think he was the inspiration behind her getting involved?
I think he was the main inspiration, and I think he is much more than a father figure to Amal – he is almost like an idol or godlike figure. His words still resonate and come back to her, and whatever she’s doing she wants him to be proud of her. I have seen a father’s influence on a daughter before, but I’ve never seen it so strong. So I definitely think he is the main inspiration and everything else comes after.

I like the incorporation of the family footage – why did you choose to include this?
Amal was born into a digital age and her father filmed her until she was about 10-years-old, when he died. I met her when she was 13, and I thought it would be very interesting to trace the entirety of someone’s life in film. The whole documentary is about her – it is named after her – and we wanted to express certain things about her character. In the family footage you can see that from the age of three or four, she was already determined, fearless and had a zest for life. She is also a little bit naughty, loud and insulting – and we wanted to show that, so you can see that this is who Amal is and who she will always be.

You won the Youth Jury Award at Sheffield Doc/Fest. What does it mean to you that the film resonates with other young people around the world?
This is exactly what I wanted. I screened the film in Norway at a youth and children’s festival and 200 high school students came and sold out the screening – that was the first time I realised it was really resonating with a young age group. It wasn’t just people from the industry at the screening, these young people really felt something even if they weren’t Egyptian. We also presented the film at Hot Docs in Toronto and they hosted a special screening for school students – like age 12 to 20 or something. And again, we sold out 300 seats and did a Q+A for an hour. It was great. The Doc/Fest prize is affirmation that we have reached who we wanted to, and it’s a great reward for something we worked on for so long.

Linkedin
RELATED ARTICLES
OTHER ARTICLES
By turning a real-life crisis into daytime television fodder, TV bosses have once again shown themselves to be completely out of touch with audiences.
Photographer David Corio’s archive offers a glimpse inside a revolutionary era of music and nightlife.
With skyrocketing rents, packed out viewings, bidding wars and more, renting in London has never been harder.
Yesterday thousands gathered outside Buckingham Palace after news of the Queen’s death broke.
Following the announcement of an 80% hike in the energy price cap from 1st October, crowds gathered outside the offices of energy regulator Ofgem to protest and declare their intention to undertake a payment strike.
Thousands attended the annual event this year to wheelie through the city and call for ‘knives down, bikes up’.