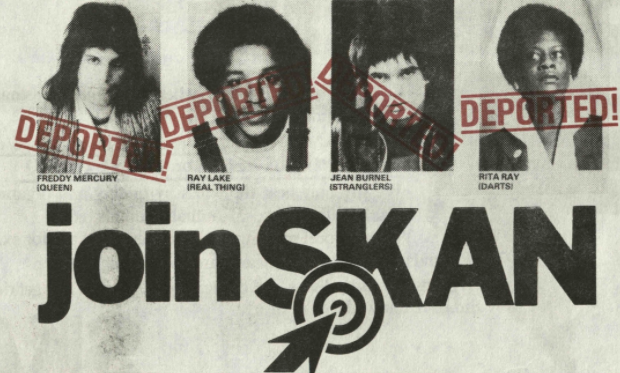 During the 1970s, an organisation made up of thousands of young people came together to combat racism in schools and beyond. While relatively forgotten, there are vital lessons to be learned from their organising.

During the 1970s, an organisation made up of thousands of young people came together to combat racism in schools and beyond. While relatively forgotten, there are vital lessons to be learned from their organising.

“It was a fantastic time,” recalls Rehad Desai, now 58, of the Rock Against Racism demonstration held at Victoria Park in 1978. “To have people stand behind your banner on your first mobilisation was tremendous. It was like, ‘Shit, we can do things, we can move people.’”

Hand-made the day before, Rehad’s banner was distinct. It marked him and his classmates from Finchley out as School Kids Against the Nazis (SKAN) – one of the hundreds of such groups across Britain that formed a vital but overlooked part of the anti-fascist organising taking place in the late ‘70s.

Enoch Powell’s ‘Rivers of Blood’ speech in 1968 saw the rise of an emboldened far-right over the following decade, who weaponised tensions over unemployment and immigration for their own gain. The National Front (NF) was the vanguard of this movement and saw schools as both a key battleground and site for recruitment, in part due to the worsening prospects for young school leavers. Their 1974 manifesto promised that under a NF government, schools would be segregated by race, the study of all social sciences (which they dubbed ‘Academic Marxism’) banned, and all unsuitable teachers fired.

The NF launched a pamphlet titled “How to spot a Red teacher”, and their publication, Bulldog, was taken over by its youth wing and repurposed as a recruitment tool. Students, who weren’t blind to the fact they were being targeted, prepared to meet the growing fascist threat head-on. Thankfully, there would be many tools in SKAN’s arsenal to prevent the NF’s advance into schools.

In 1978, school children in Hackney formed SKAN (School Kids against the Nazis) to oppose the National Front. An inspirational piece of social history. pic.twitter.com/oX24Khs9pr

“I can still smell the printing solvent in my mind,” says Frazer Goodwin, now 57, reflecting on his involvement with the SKAN branch in Coventry. Like many other branches across Britain, they made use of printing presses and produced leaflets and zines, which formed a key part of their organising, creating a radical anti-fascist pole around which school kids could congregate. Local zines would incorporate school-based issues such as corporal punishment, uniform policies, and authoritarianism with wider militant and anti-fascist politics.

Meanwhile, the national zine published under the SKAN umbrella sought to blend political education, sharing information and tips on anti-fascist organising with youth culture. The first issue sought to answer the question on page two, “How do we finish them before we finish us?”. It also stated: “We have to make sure that everyone finds out what NF stands for: NO FUN, NO FREEDOM, NO FUTURE.”

Those pages buzzed with the excitement of youth culture at the time, providing details of upcoming Rock Against Racism concerts and interviews with artists like Steel Pulse and Tom Robinson. Issues of the zine had callouts for readers to get involved with ‘Bikers against the Nazis’, to protest at tennis courts where known fascists played, and to attend the ‘Rampages against Racism’ at the Mad Dog Bowl skatepark, organised by skateboarding school kids. In Tyneside, all meetings would be immediately followed by a new wave and reggae disco. SKAN was a broad and inclusive movement celebrating all subcultures: it didn’t matter who you were, just that you were unequivocally against the Nazis.

In identifying the NF as Nazis, SKAN made explicit the groups they were facing down were not simply far-right, but actively fascist. In doing so, they also carried out political education to deepen students’ understanding of fascism and its history. Leafleting schools, community centres and football grounds to counter the racist lies peddled by the NF was a key part of this work. Links were also made with international anti-racist movements, as groups in Wandsworth and Brighton invited anti-apartheid activists to speak.

Even though these groups were a safe space for celebration and education, the threat inside and outside the school gates was never far away. “Being known as a SKAN organiser did lead to confrontation at school on a few occasions. Some kids targeted me because of politics, and I do recall one beating on the back of it,” says Frazer. 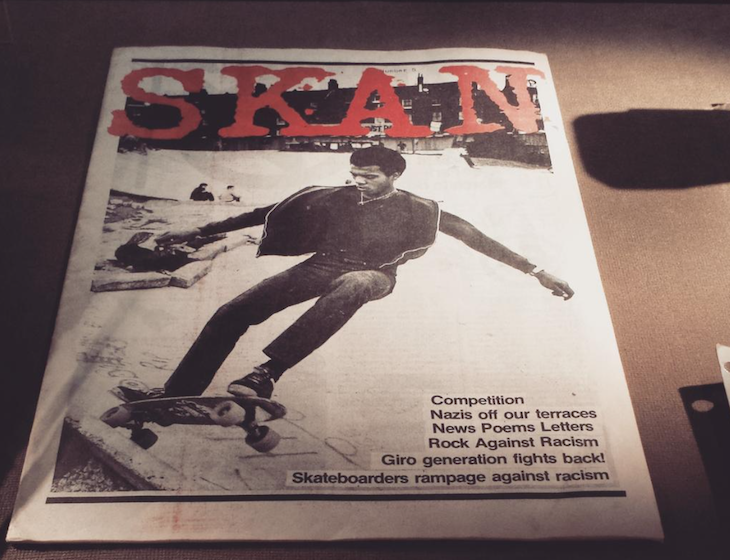 To counteract this, several groups organised self-defence lessons, with adverts posted by Tower Hamlets groups prioritising spaces for ‘Asians, West Indians and the girls’. Despite their age, members would often be attacked attending counter-demonstrations. “We’d go down there as a bunch of schoolkids, half – if not most of them – girls, and next thing we knew, a bunch of hardened street fighters would come out and you’d be getting chased around the streets. It was a physical time,” says Rehad of mobilisations in East London.

Being repeatedly faced down and defeated in the streets like this, most notably at the Battle of Lewisham, severely dented the momentum of the NF, and by the early ‘80s, this iteration of the fascist movement had largely run out of steam. Forty years on, anti-fascist organisers still draw strength and inspiration from the work of groups like the Anti-Nazi League (ANL) and Rock Against Racism, but much of SKAN’s trailblazing efforts have largely been forgotten.

Thankfully, recently resurfaced footage from a 1978 Thames Television documentary provided a rare glimpse of SKAN in action, as students in Hackney were captured marching across the Downs chanting “Black or white, join the fight, stop the National Front”. Brian Capaloff, now 58 and a former student at Hackney Downs School who was present on the march that day, saw actions like this as much about sending a message as defending his own community. “[SKAN] and the concert at Victoria Park, though they took place in Hackney, were also for the rest of London, to say that we’re not going to take [racism], because Hackney was mostly a place where [racism] wasn’t taken already,” says Brian. “There was nowhere for racism to survive in that kind of environment [Hackney].”

An inspiring message, knowledge sharing across branches, as well as occasional logistical support from more senior groups like the ANL, helped what were largely grassroots groups have the successes they did. SKAN created lifelong anti-fascists, showing them direct action got the goods and injected vibrancy and levity into a movement in a way that only school kids could.

Direct action taken by the Ealing SKAN offers a clear example of just how effective this movement could be. After hearing that their Tory-led council planned to allow the NF to use Ealing Town Hall for meetings, they joined up with the ANL to gather a 6,000 strong petition in opposition. Then on the night of the next council meeting, 20 SKAN members showed up in the public gallery and pelted the councillors with eggs, flour and stink bombs any time they came out with anything racist, leading the plan to accommodate the NF to be swiftly dropped.

The far-right threat to schoolkids looks very different today than it did at the time of SKAN, as alt-right vloggers, white supremacist forums and fascist groups grooming teenagers via social media are more likely to be the routes into fascism than a printed leaflet. But according to Rehad, the methods to opposing them are still unchanged: “The threat’s never gonna go away. We’ve got to stay vigilant. We’ve got to provide alternatives, and we’ve got to remain utterly oppositional and never forget the power of youth culture.”

Linkedin
RELATED ARTICLES
OTHER ARTICLES
The workforce is now gearing up for industrial action after receiving a measly pay rise, reports Ella Glover.
In his 2008 series, the photographer pictured himself as Angela Davis, Martin Luther King Jr., Malcolm X, and other prominent figures.
A group of young Palestinians have found temporary freedom in the act of parkour, reimagining wreckage and ruins as a series of high-octane playgrounds.
Photographer David Corio’s archive offers a glimpse inside a revolutionary era of music and nightlife.
Birdy Chu reflects on documenting the historic moment in which the territory was formally passed back from the UK to China.
A 37-year-old woman shares how her abortion led her to become a clinic worker, and the abuse she’s received in that role.