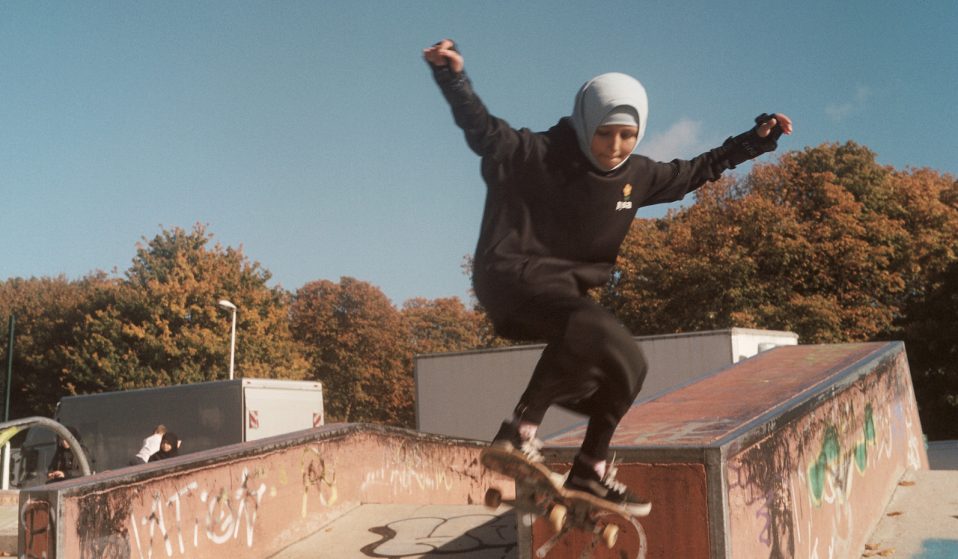 Layna, Maysa and Amaya are three siblings looking to disrupt narratives around the sport. In doing so, they’re hoping to inspire a new generation of skateboarders.

Layna, Maysa and Amaya are three siblings looking to disrupt narratives around the sport. In doing so, they’re hoping to inspire a new generation of skateboarders.

In 2021, skateboarding made its Olympic debut at Tokyo 2020, sparking a reimagining of what a sport which was once largely confined to counterculture could be. When three sisters from Hull called Layna (age 12), Maysa (11) and Amaya (nine) turned on the TV a few years ago, they found a muse in the young female skater Sky Brown who, at 14-years-old, is already an Olympic medalist and the world’s youngest professional skater. Layna, Maysa and Amaya – who, as a skateboarding trio, go by ‘Insistergaters’ – hope to join Skye at the Olympics one day after beginning their skateboarding journey last year.

“We got wooden skateboards and went to the skate park,” Amaya tells me over an afternoon Zoom call. “At first we were kind of nervous, but then we broke out of our shell. We fell a few times. But we started to get comfortable.” When Brown heard of their story through a BBC interview, she took to Instagram to share her thoughts. “Skateboarding is for EVERYONE. This makes me soo happy. Amaya, Maysa and Layna you girls are so cool,” she wrote. “I’m so proud of you and can’t wait to meet you. Until then keep shredding.” 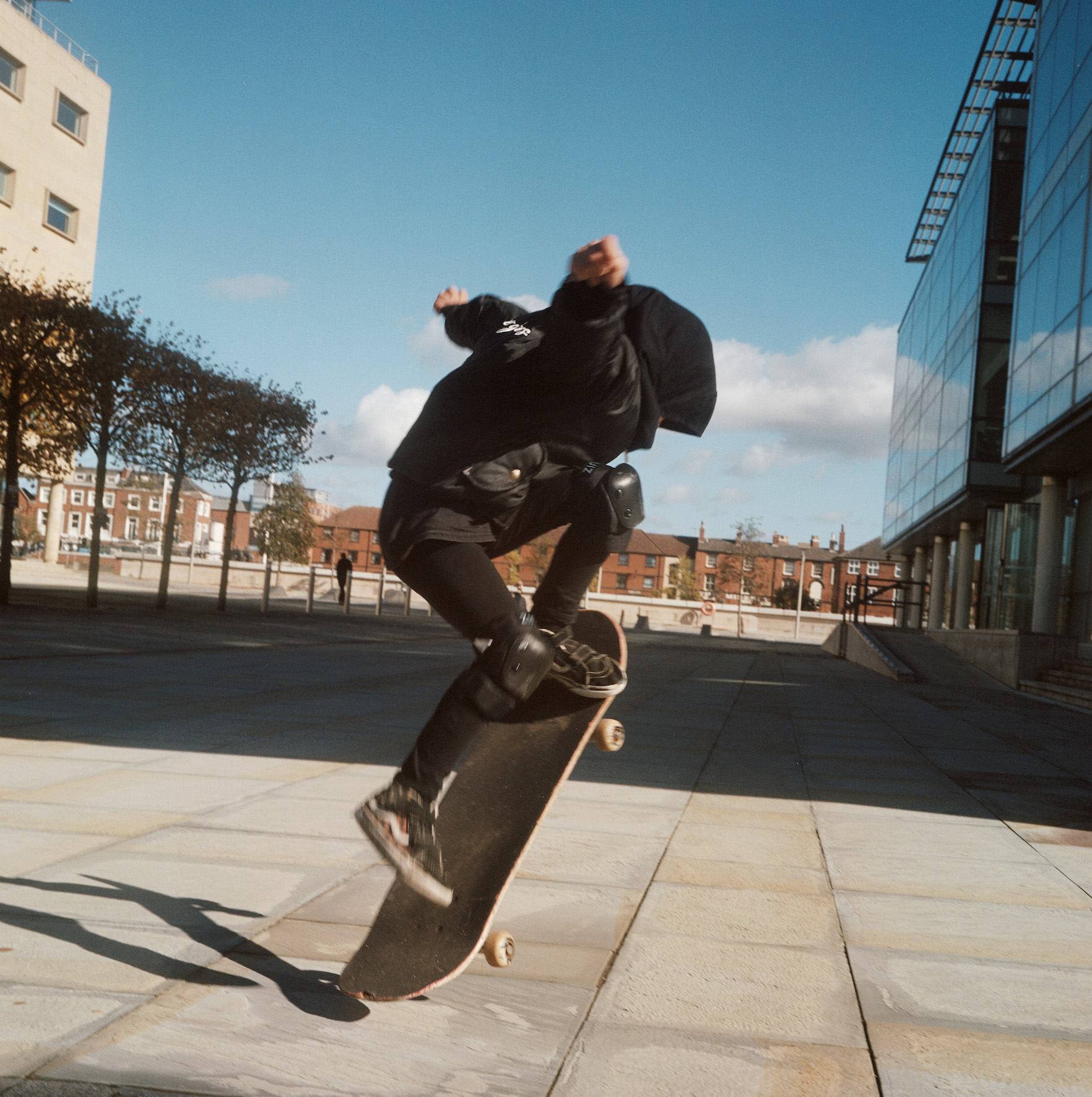 On their Instagram, the girls share reels of themselves skateboarding around the UK’s cities and attending Islamic music events, and have an active fanbase of like-minded skateboarders. “The coolest kids,” reads one Instagram comment, “You guys are amazing!!!” reads another. Insistergaters join the ranks of groups like SkatePal and Skater Uktis, who are taking to their boards to challenge societal expectations and political oppression, and to find joy in movement, competition and community.

Why is the global skateboarding scene changing to include such a wide diversity of participants? Perhaps the answer lies in disrupting narratives and instigating change – just as Insistergaters signal in their name (a play on ‘instigators’ and ‘sisters’). For marginalised groups, the greatest form of resistance and empowerment is to flip an established narrative, such as the ‘skater boy’ stereotype, which sparks an image of young, athletic, white males. The numbers are revealing, with only 23.9 per cent of all skateboarders in the US being women (according to Public Skatepark Guide). And, even less common still is the presence and visual representation of Muslim girls skateboarding. But last year brought the biggest surge in female skateboarders the sport has ever seen – likely due to the pandemic and an eagerness among young people to share their tricks on social media. 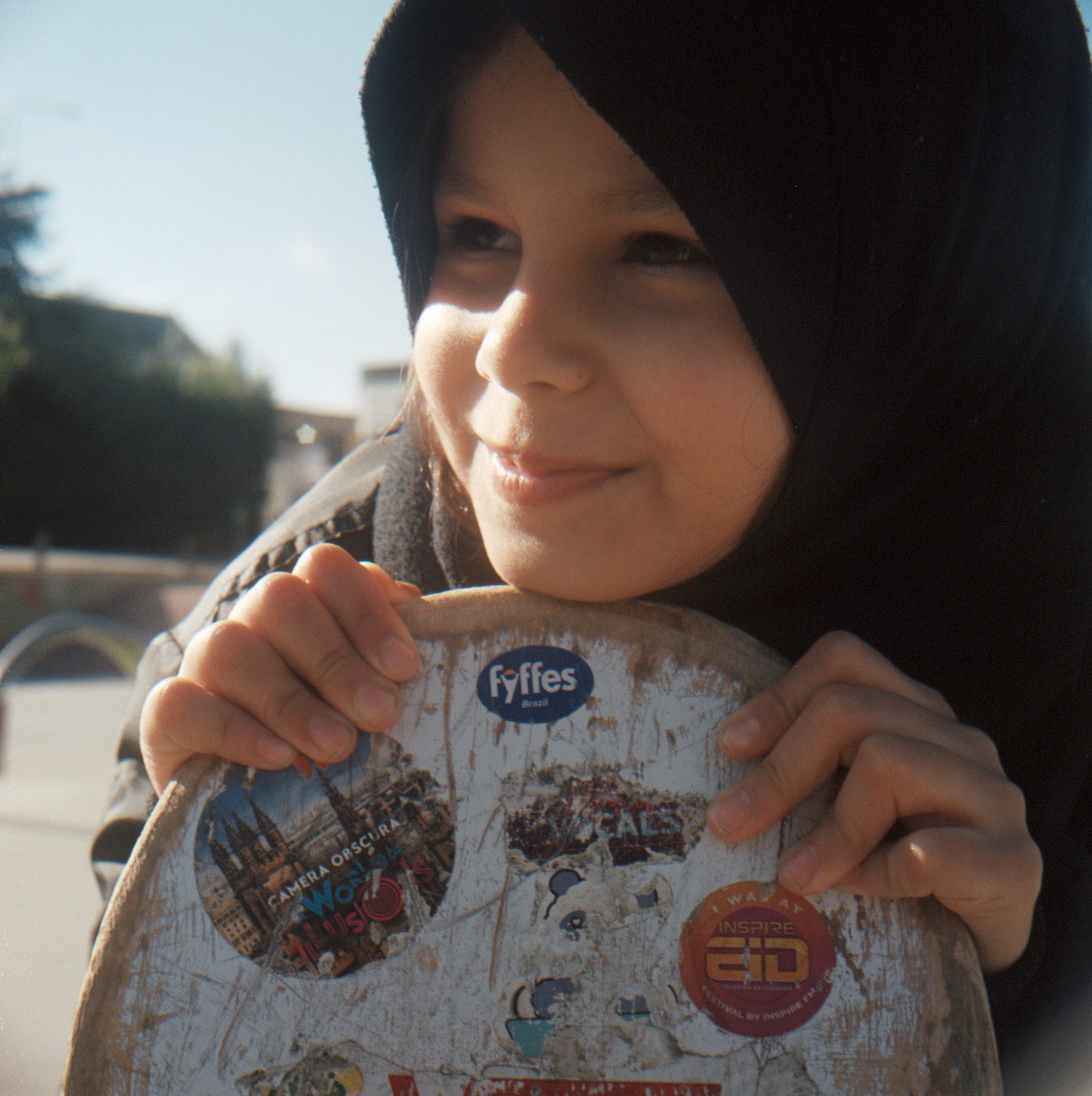 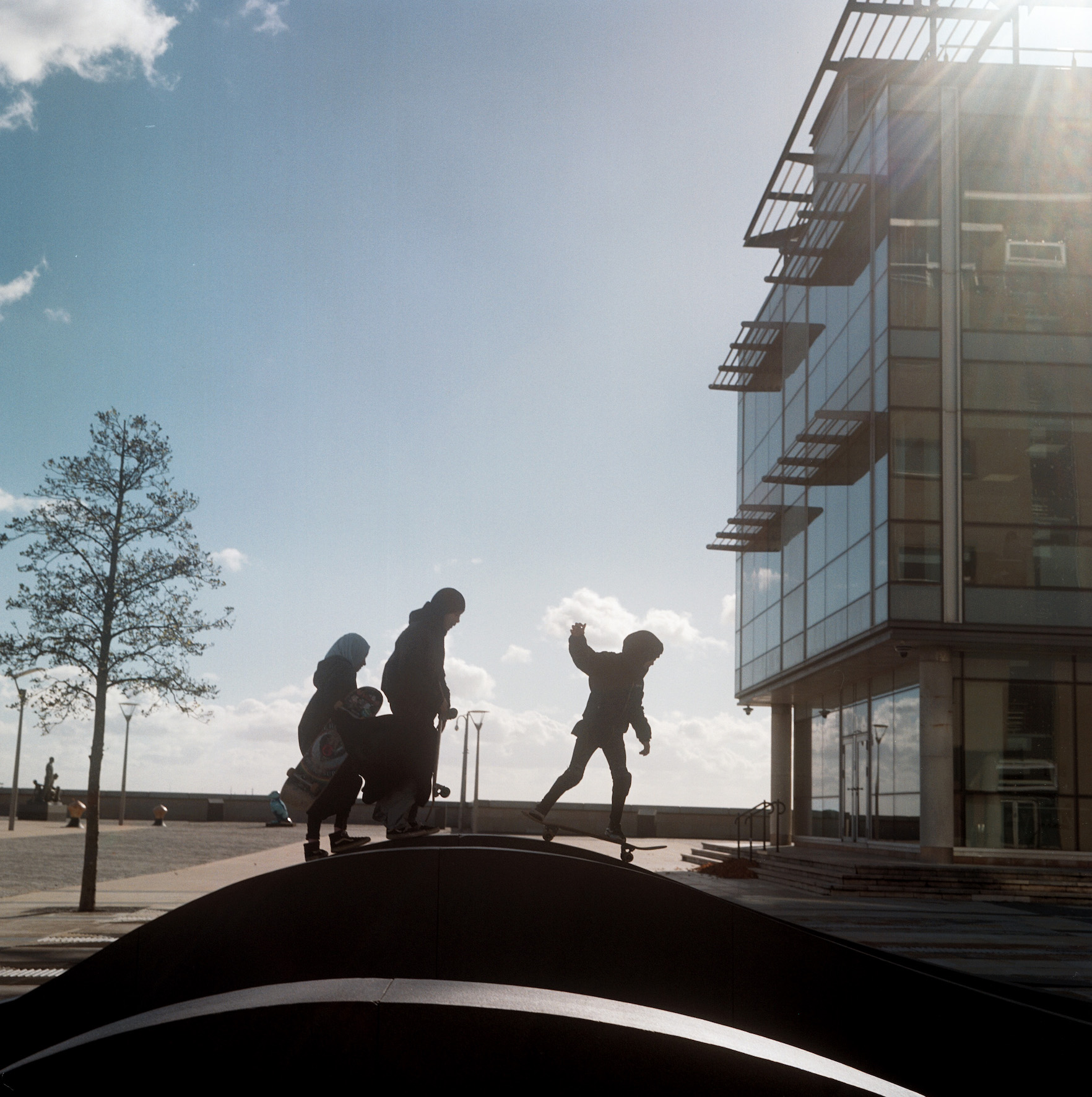 As Sasha Rainbow once said in an interview about the young Indian skater Kamali, “Skateboarding is a symbol for [Indian] women, a symbol of going against the grain, standing boldly in front of society and taking ownership of their lives.” Skateboarding was a counter-cultural sport at birth and remains so by nature, so it’s no surprise that it continues to be utilised to this day to empower communities who might not otherwise be encouraged to participate, or even be exposed to it.

In cities like Hull – the site of the Islamophobic attack on Imam Hafiz Salik in 2013 – it’s important for the girls to show their followers that they are “just normal people” – in other words, different to how the “media represents [Muslims]”. Challenging stereotypes wasn’t an initial intention of theirs, rather it has grown organically from them sharing their skills online and gaining a following. “We are able to do what we want to do. It removes the stigma of people thinking that we are boxed up in the house” or, as women, that they’ll “be staying in the kitchen,” the girls say. 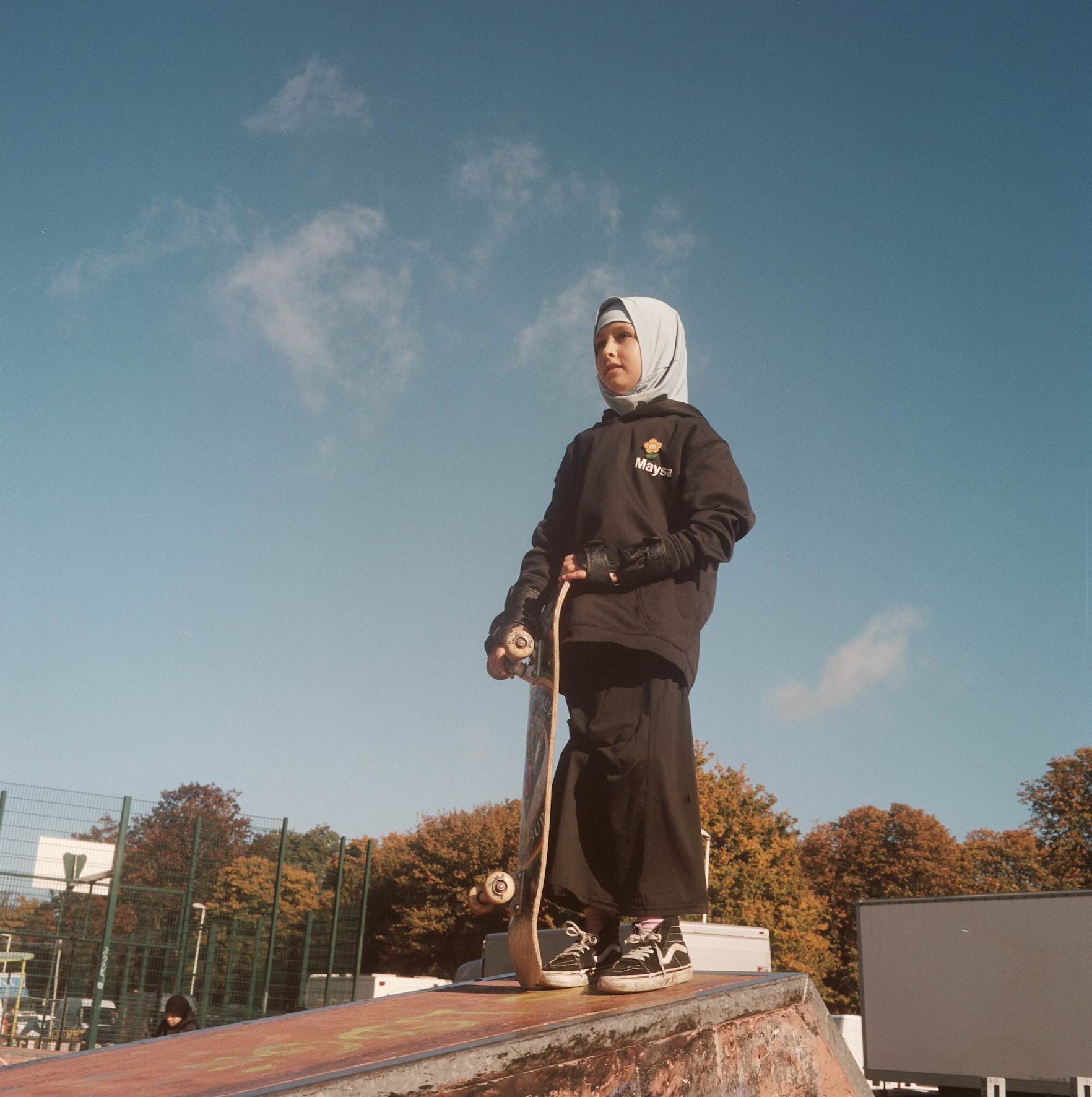 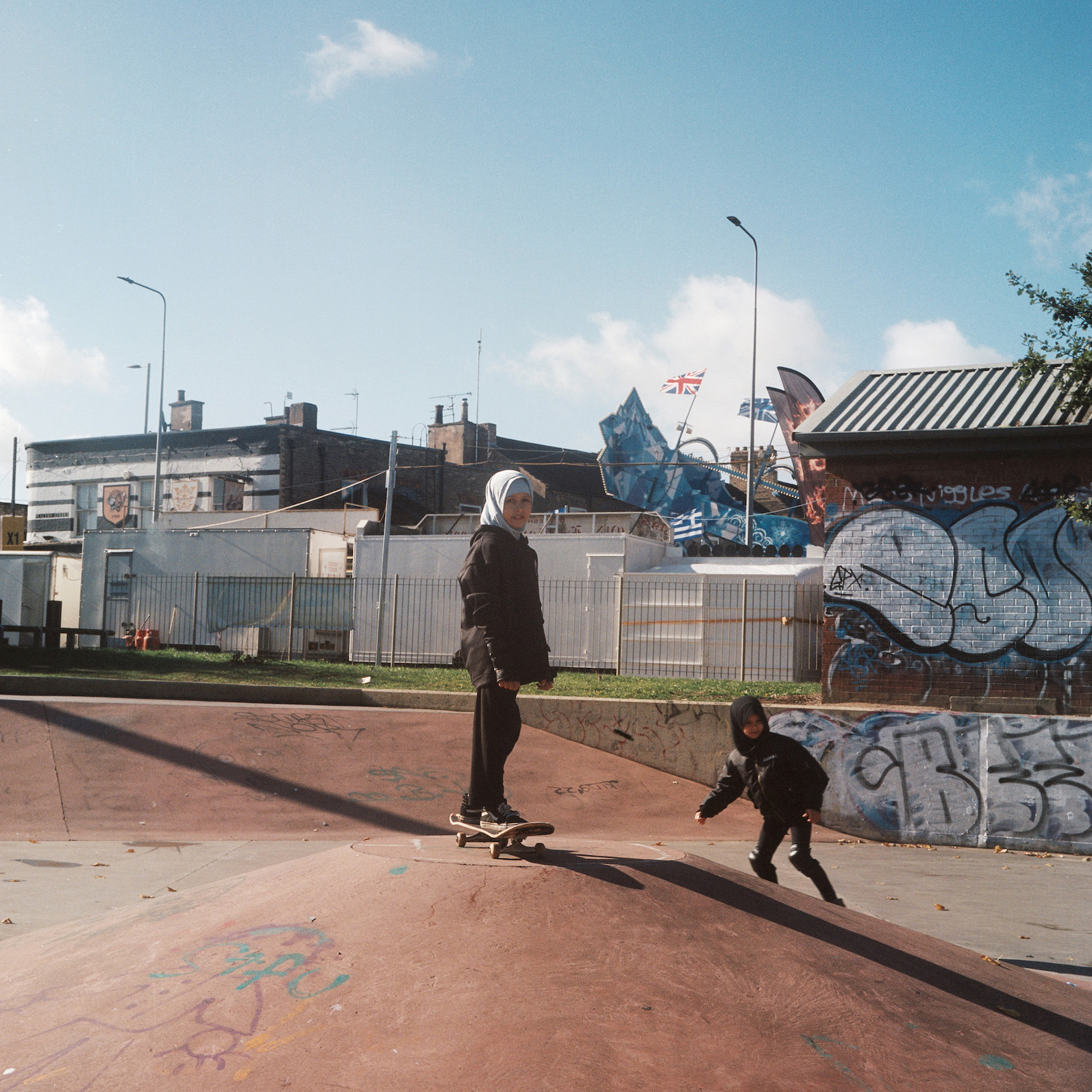 Another perk of the sport is accessibility – all the girls needed to get started were some relatively cheap wooden boards and a road, meaning they can practise anywhere they go. Sporting and travelling together, the sisters tell Huck how their bond has tightened since beginning their journey. They’ve learned more about each other and are able to cheer one another on, which has encouraged them to try out new tricks and challenges. They can already jump across 15 feet but Amaya is practising to the kick flip and will need more of the same encouragement and faith from her sisters, she tells me.

To reach for gold requires consistent practice and unwavering confidence – both qualities that skateboarding has taught Layna, Maysa and Amaya. The girls are practising everyday to refine their impressive tricks over huge ramps in the hopes that they can go to the Olympics “to prove everyone wrong that thinks we can’t,” says Layna. Next year, the family will be flying out to Seattle to be in a rap video and they’ll continue to attend skate parks and competitions.

Layna tells me that skateboarding has given her and her sisters “a chance to bond more than ever before”. As Amaya puts it, “[Skateboarding can] inspire other little girls to come out of their comfort zone and just be who they want to be”. 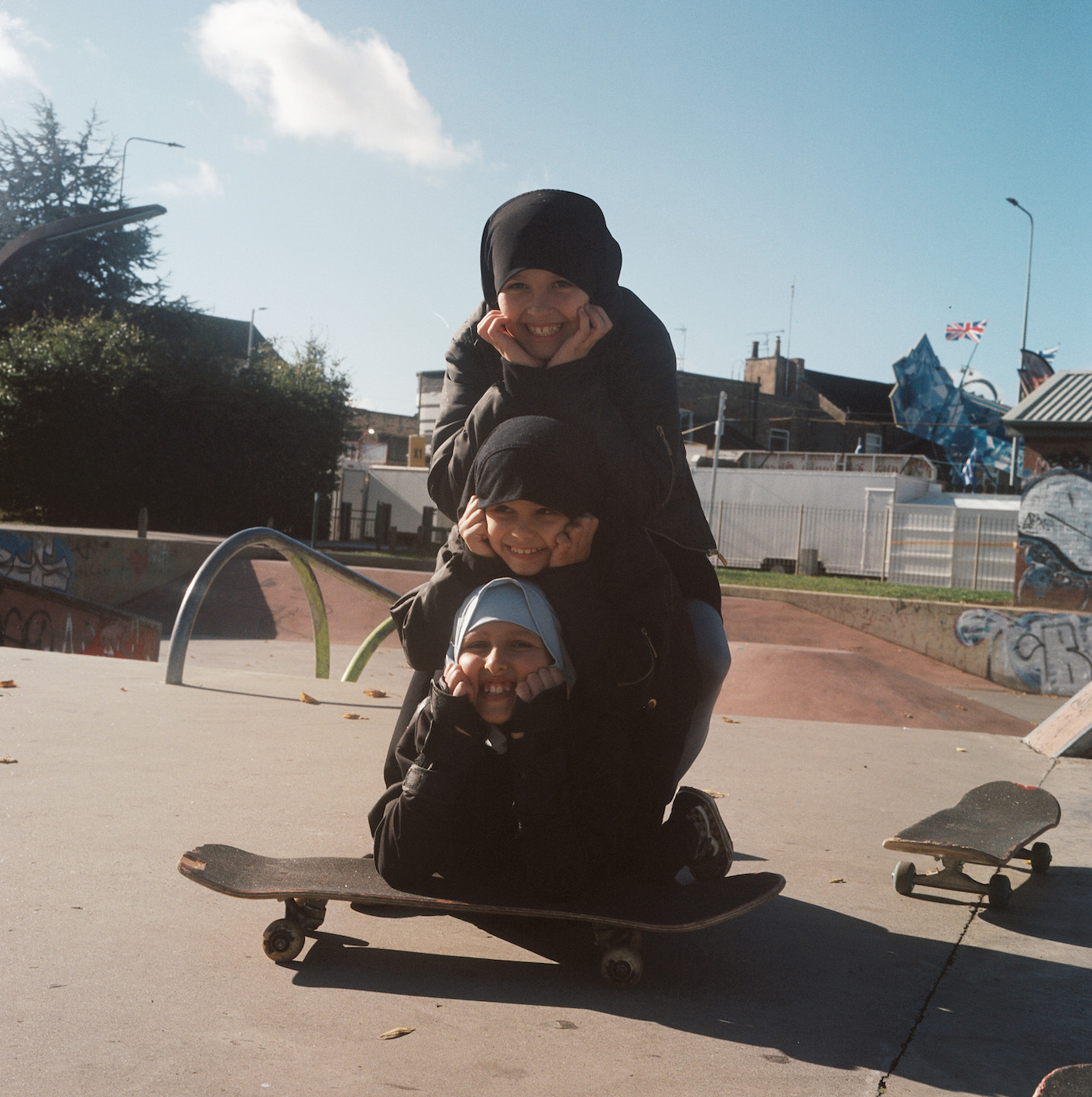 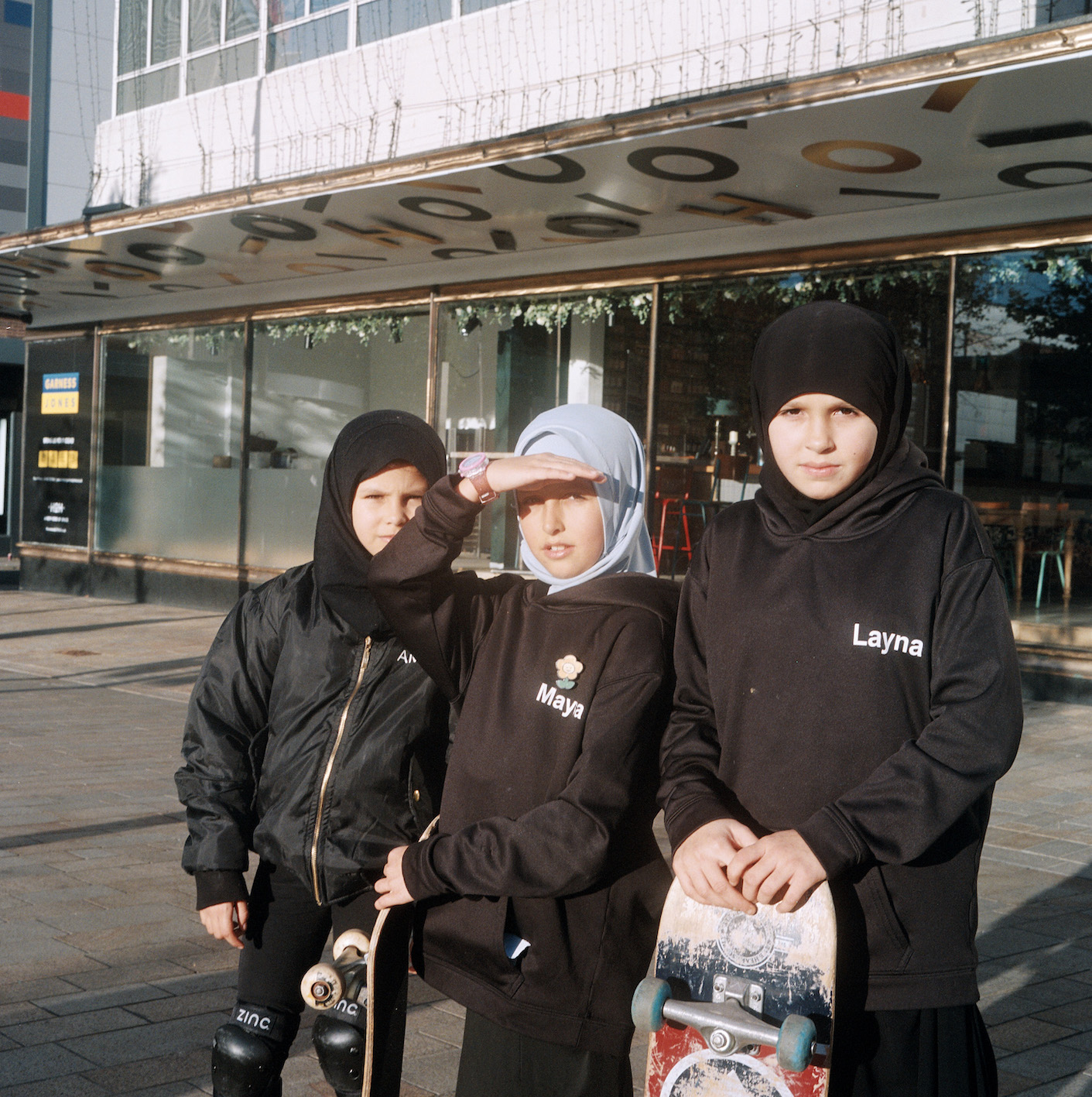 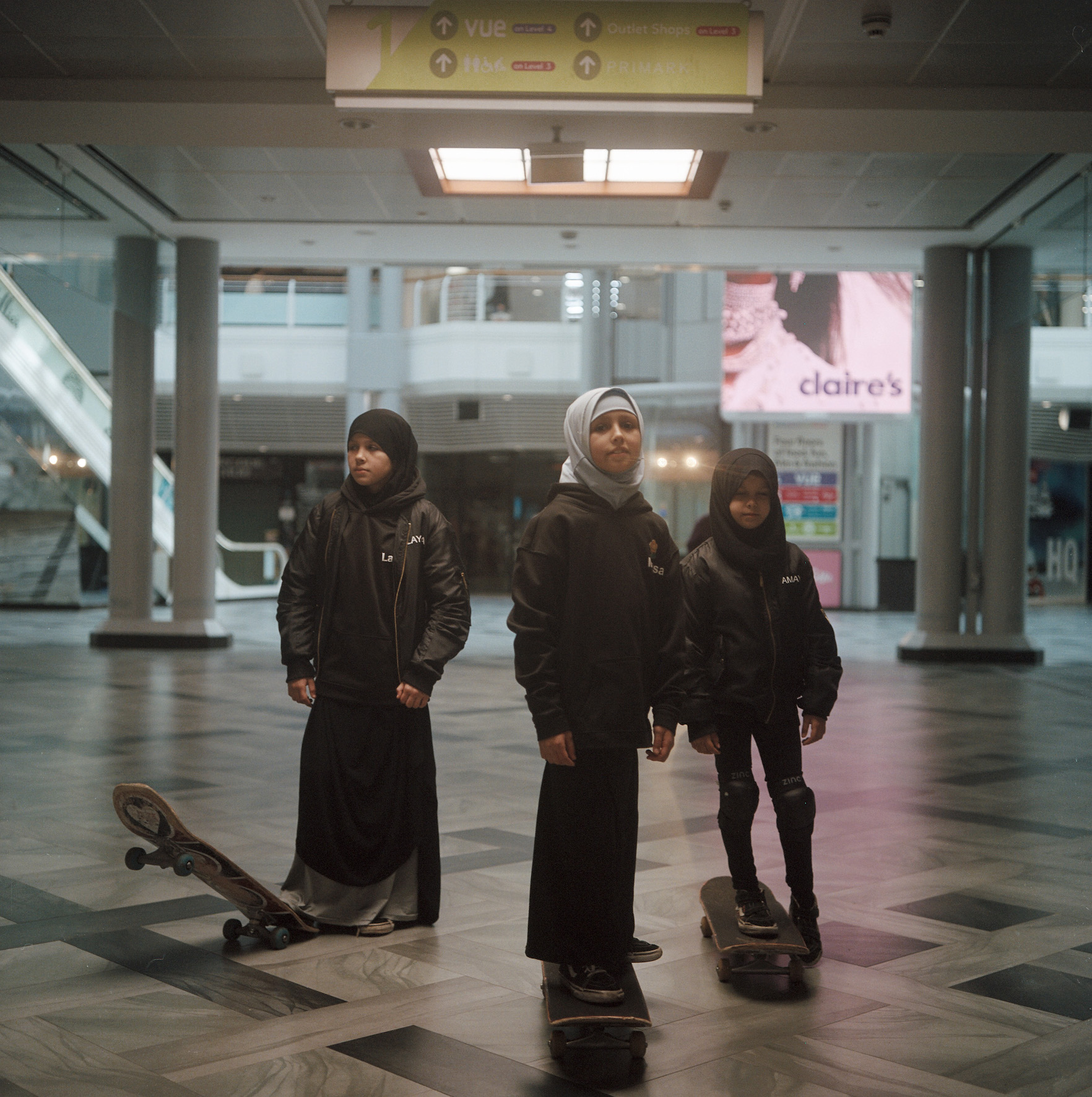 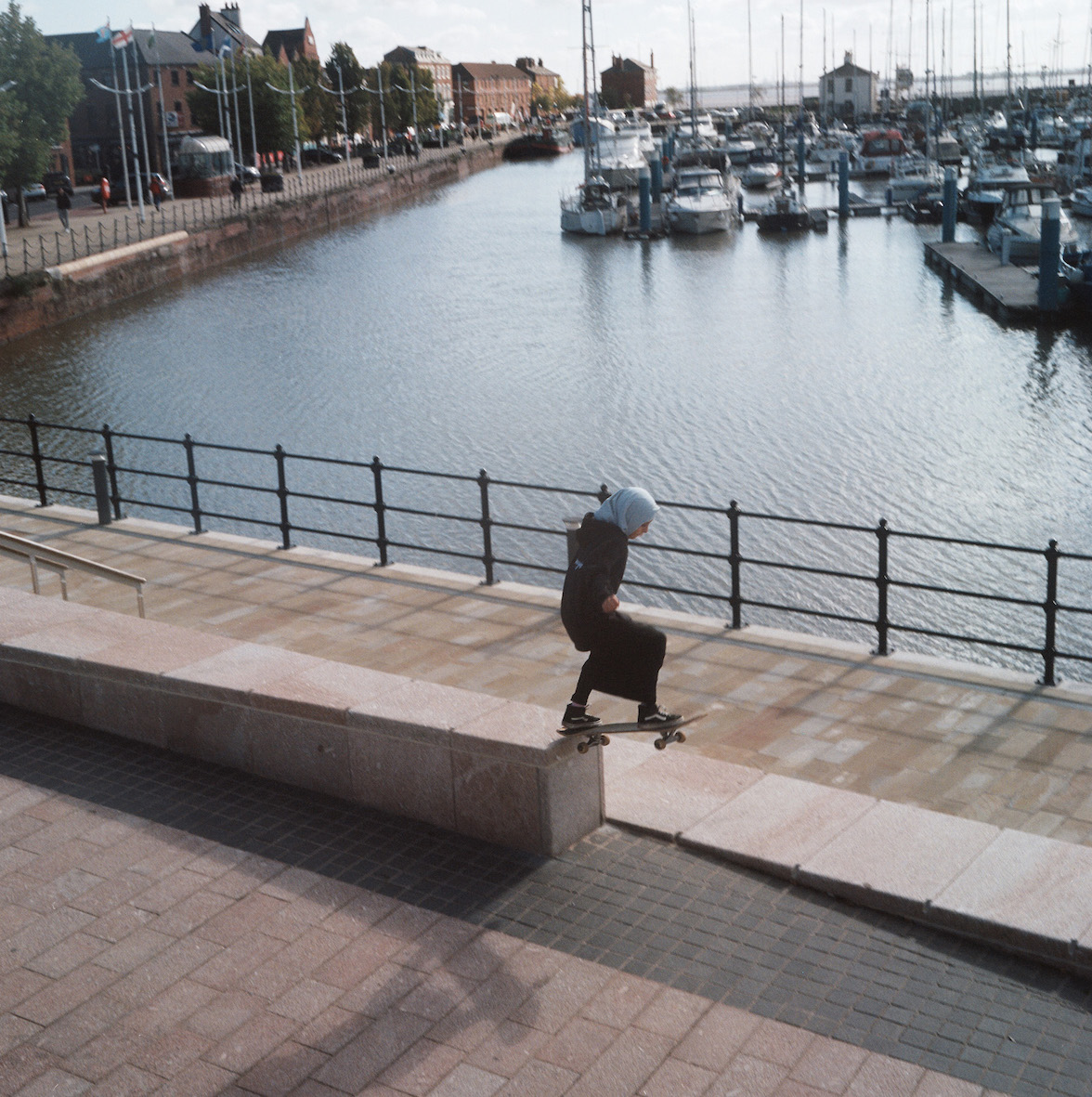 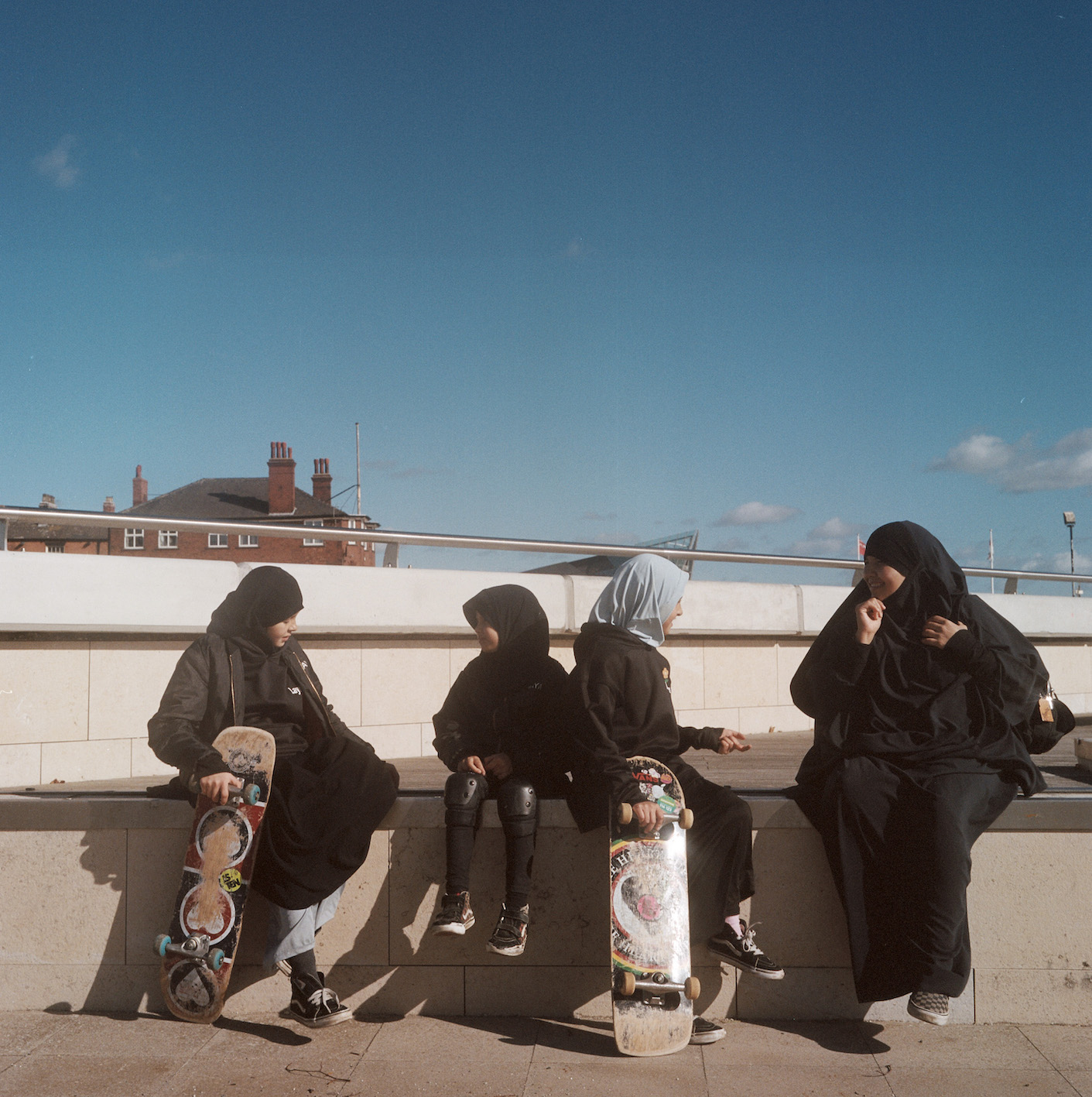 Linkedin
OTHER ARTICLES
Activists and campaigners are fighting back against new laws that would seriously undermine the ability to take industrial action, calling it an attack on fundamental workers' rights.
Following the release of his debut single, Deyaz talks battling addiction, dealing with his struggles through music, and building a budding music career from his living room.
After building his reputation covering the US civil rights movement in the 1960s, the photographer went on to produce some of the most enduring images of the past century.
After blocking the Scottish government’s gender recognition reform bill, Westminster is now devising further changes to the law to make it harder for trans people to self-identify.
Photographer Sean Maung reflects on documenting a small town in Pennsylvania afflicted by high levels of unemployment, poverty, violence, crime, and addiction.
The action took place in response to the 200 asylum-seeking children who were placed in hotels run by the Home Office who have gone missing.