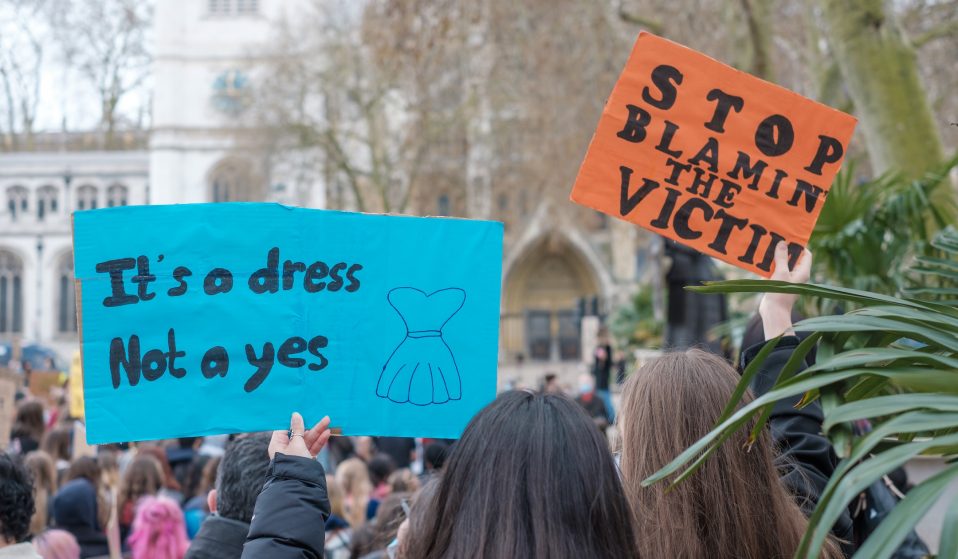 With Covid-19 pushing more people into precarious work, many women are finding themselves in uncomfortable and sometimes dangerous situations without workplace protections.

With Covid-19 pushing more people into insecure work, many women are finding themselves in uncomfortable and sometimes dangerous situations without vitally important workplace protections.

Emily*, an 18-year-old from London, was working on her second-ever shift in her new job as a security guard when she was sexually assaulted. She’d been asked by her company – where she was employed on a zero-hours contract – to stand outside the venue and direct people entering when a member of the public approached her.

“I think he was drunk,” she recalls, “he got a hold of me and he wouldn’t get off. He kept touching my arse and feeling me up, and he had his arm around my waist. I didn’t know what to do, so I had to put up with it until he went away.” When Emily eventually left her post to report what had happened, she says her supervisor was initially more concerned as to why she wasn’t doing her job.

“My case was treated as an isolated incident, that I should report [to my manager] and go back to my post and continue working,” Emily says.

Emily’s experience is sadly all too common among precarious workers. According to a 2017 report by the BBC, people in insecure work, such as gig economy workers, zero-hour workers and freelancers, experience workplace sexual harassment at a higher rate than those employed by a business. Around 46 per cent of gig economy and zero-hour workers said they had experienced workplace sexual harassment, compared with the still startlingly high 29 per cent of securely employed workers.

“In a traditional workplace, there is typically an outlined protocol taught to the employee of how to come forward and navigate the system,” says Mary Morgan, a writer, scholar and activist focused on body politics. “But [precarious workers] are typically not given any clear course of action, adding additional layers of uncertainty and vulnerability. Sometimes they don’t have access to HR, or aren’t made aware they do have access, making the path of reporting harassment feel impossible.”

“I quit after that shift,” Emily says, “because I thought: if that was a man standing outside, and if I hadn’t been by myself, it wouldn’t have happened. My managers obviously didn’t consider that a young lass standing outside, doing a job, could potentially be at risk of anything.”

For insecure workers who’ve faced sexual assault, adequate aftercare is less likely to be provided by an employer. Once Emily quit, she heard nothing from her company. “If I never went back to them, it made no difference, because they have literally hundreds of other [workers] in London,” she says. Indeed, for many precarious workers, this feeling of expandability weighs heavily.

Laura Hancock, chair of the yoga teachers’ branch of the Independent Workers’ Union of Great Britain (IWGB), says sexual harassment is similarly rampant in the yoga industry. It is exacerbated by the fact that many yoga teachers are considered self-employed, and therefore work alone, within what Laura calls “the yoga bubble”.

“[There are] no regulatory bodies, no kind of structures in place, no reporting channels or anything like that… it’s an environment that is very conducive to abuse,” says Laura. There is also another layer that makes workplace harassment and abuse much more pervasive in the yoga bubble: the student-teacher dynamic.

“The power dynamics within settings [where there’s a lot of body contact] is problematic,” explains Laura of the teaching environment. It was only when Laura and other yoga teachers from IWGB began to speak to one another through the union that they started to realise just how rife sexual harassment is within the yoga industry.

“[One of our members, Sarah*] was being harassed by one of her students,” Laura says, “It was very, very persistent… very intrusive and uncomfortable.” But, when Sarah raised this issue with the venue she was teaching at, “they basically ignored her concerns, and said that they prioritise the paying customer over the wellbeing of the teacher,” says Laura. Compounding the problem is the fact that self-employed yoga teachers often don’t earn a living wage, so, in order to make ends meet, Laura says yoga teachers usually flit between different venues throughout the day. For Sarah, like many workers put in her position, losing out on one stream of income by refusing to work at a venue simply wasn’t an option.

“[Precarious workers] feel forced to decide whether their best interest is to maintain a relationship with a company or to fight harassment, which is a horrifying position to put people in,” Mary says. “Many times, it’s the fear of losing that job and what comes with it that prevents victims from coming forward. Their livelihoods are at stake, as well as their reputation and their careers.”

For couriers, who often work via digital apps – a ubiquitous feature of the gig economy – workplace sexual harassment is all too common. Dealing with apps makes reporting issues while working not only difficult, but impersonal and, being in a male-dominated industry, there are fewer people in positions of power who can relate to issues of gendered violence in the first place. On top of this, the lack of visibility for female couriers makes them even more vulnerable.

Tara*, a trans woman from South East London, says that her shifts often take place late at night. “If you’re hanging around outside a restaurant and it’s dark, people do just come up to you and harass you,” she says. “There was a guy I’d seen a couple of times around Peckham. He just came up to me and was like, ‘I like your tits’. He was holding on to my handlebars, so I couldn’t get away. It took quite a long time to get him to let go of my bike.” She has also, in the past, been subject to transphobic abuse while on shift: “I was once asked [by a stranger], ‘Are you a man or a woman?’”

Attempts to report these incidences through her company’s automated system have consistently proven futile, Tara says. “I don’t really tell them about harassment, because [if I do] they just often respond: ‘Can you complete the order?’” Tara is often directed via her company’s app to cycle through places in which she feels threatened, such as through empty parks late at night. Her requests to be sent on a different route have been met with similar automated messages.

But workers are banding together to fight for greater protections. Members of IWGB’s recently established Women and Non-Binary Couriers Committee have set out four demands that will help women and non-binary workers feel safe at work. “The first is taking responsibility for our safety. The second one is improving rider support with human contact instead of automated messages,” says Kenya Scarlett, the Committee’s officer. “Also, allowing us to refuse jobs in unsafe areas without suffering financial detriment and implementing active bystander training.”

Kenya stresses the importance of joining a union in order to tackle the issues faced by insecure workers. Without adequate workers’ rights, precarious workers are denied things like holiday pay, sick pay and the ability to appeal terminations – although unions like IWGB can help with this. But, as well as that, unions can provide a vital sense of community and a space to talk about sexual harassment at work.

“Community is so important to our lives,” says Kenya. “Just being in a group of like-minded people who understand and empathise with your situation is really important. It makes you feel like your voice is being heard.”

Linkedin
RELATED ARTICLES
OTHER ARTICLES
A 37-year-old woman shares how her abortion led her to become a clinic worker, and the abuse she’s received in that role.
By turning a real-life crisis into daytime television fodder, TV bosses have once again shown themselves to be completely out of touch with audiences.
Rhiannon Adam spent three months capturing an ageing society wracked by division, isolation, and the aftermath of scandal.
Following the announcement of an 80% hike in the energy price cap from 1st October, crowds gathered outside the offices of energy regulator Ofgem to protest and declare their intention to undertake a payment strike.
For over a decade, gamblers have won big by employing people to place live bets from the court. But does this dubious method still work?
The two-day long event returned to London this year, showcasing a spectacular parade, steel bands and Caribbean food.