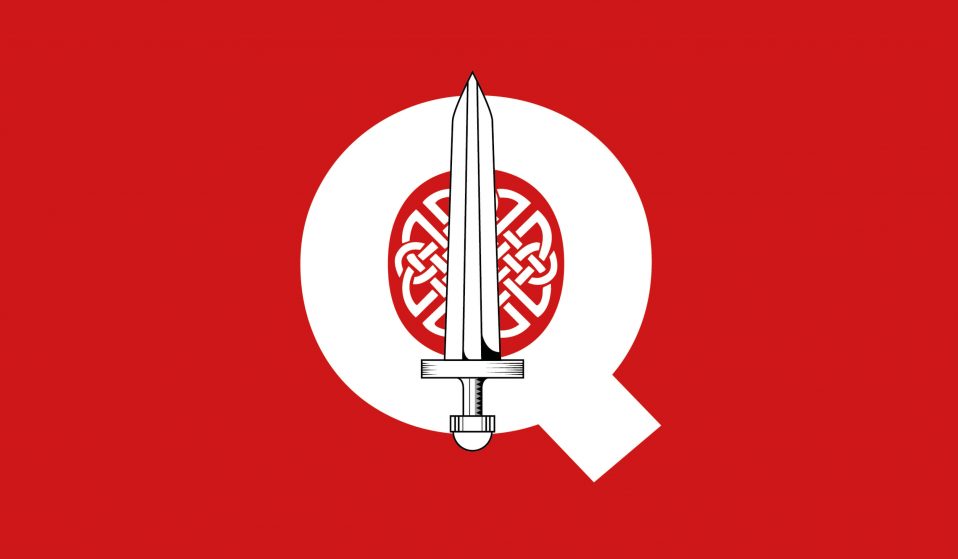 White supremacy and Norse myth have long been interconnected – but a community of LGBTQ+ activists and allies are fighting to save this noble tradition from hate.

At the Capitol riots, one figure stood out from the crowd: the QAnon Shaman, covered in tattoos of Norse symbols. White supremacy and Norse myth have long been interconnected – but a community of LGBTQ+ activists and allies are fighting to save this noble tradition from hate.

On 6 January, 2021, the world watched, helpless, as the seat of Western democracy was beset by an army of Trump supporters. Confederate flags fluttered upon the Capitol’s steps. A sea of MAGA hats moved into the Capitol. Bearded, ruddy men haphazardly placed their boots on the desks of the world’s most important lawmakers.

As the world watched the chaos unfold and thought, ‘How did we get here?’, one figure stood out from the crowd. The topless, fur-clad ‘QAnon Shaman’, covered in Norse tattoos.

White supremacy and Norse symbolism have long gone hand-in-hand. The 2017 Charlottlesville ‘Unite the Right’ protests saw Thor’s hammer depicted on statement flags. The Valknut, a Norse symbol associated with the god Odin, is recognised as a hate symbol by the Anti-Defamation League. The 2019 New Zealand shooter referenced Valhalla in his manifesto, the heaven for Viking warriors.

NEW from Phoenix man known as QAnon Shaman:
“My time in jail has permitted me to start to reanalyze my life. I am deeply disappointed in former President Trump. He was not honorable. I deeply regret and am very sorry I entered into the Capitol…I should not have been there… pic.twitter.com/sIzpn8QCF4

The Nazis believed that Viking culture was similar to the ‘true’ German heritage. They used the image of white, masculine, heroic Vikings to underpin their ideas of a supreme white race. Over the years, these ideas morphed and grew, making their way to social media and YouTube. A modern figurehead for Norse white supremacy is Varg Virkenes – a ’90s Norweigan black metal star, white supremacist pagan, and convicted murderer. After his release from prison for murder in 2009, Vikernes turned his hand to YouTube. His YouTube content was so outrageous, he was banned from the platform way back in 2019. Vikernes disavows any non-European religions, and in the ’90s identified as a Nazi – although, he has since said his views are no longer in-line with Nazism.

But where you see this white supremacist rhetoric online, you also see something else. A group of Norse enthusiasts and academics – many of them queer – are fighting back against the sea of hate. According to Amy Jefford Franks, an independent researcher and host of the podcast Vikings are Gay!, many queer people see themselves reflected in the Norse pantheon of gods. “A lot of people who feel most connected to Loki, and often those are very queer people as well,” they explain. “Loki has so many different elements of queerness to him.”

Loki is the god of mischief and trickery, and many of his tricks involved subverting gender in one way or another. In one legend, Loki transforms himself into a female horse to prevent a giant from marrying the goddess Freja. Loki, the female horse, seduces the giant and returns months later, pregnant with a mythical horse-baby. And it’s not just Loki that subverts gender-norms – the examples are countless. In one legend, Thor even cross-dresses to get his hammer back – although he wasn’t too happy about it.

Nate Richardson-Read, a 38-year-old PhD candidate in queer Viking studies from Scotland, explained why Norse myth can lend itself to a queer interpretation. “I find it hard to look at Norse myth and not see the queerness of it,” they say. “It’s people changing shape and identity, performing different genders in lots of ways.”

“My work looks at Norse Myth with a queer lens,” they continue. “What if the assumption wasn’t, for example, that these two men in the same grave were just good pals – what if they were lovers? I look at history, and look to find a basis for my community.”

For Casey Eade, a 29-year-old American voice-actor from Las Vegas who identifies as gender-fluid, seeing a queer history and culture helped her embrace who she was. “I felt very Bowie-ish about gender my whole life, and you know these myths are over 1,000 years old, probably older. Genderqueer people have always been here. For folks like me, characters like Loki helped me embrace it even more.”

“Loki is an outcast, an outsider,” she continues. “But he kind of revels in it and he’s like: ‘I’m not trying to fit in, I’m just going to be me.’”

While Nate and Amy battle these misconceptions through academia, Casey has taken to TikTok to debunk these misconceptions and provide a different perspective on Norse myth. “To create a positive space in a space that’s been co-opted by hatred is such a noble and good thing to do,” she says. “If we can see ourselves in history, it makes it easier for us to consistently work to combat that hatred… I want LGBTQ+ kids to feel safe, like they can explore their gender identity and their sexuality while knowing that it’s not any sort of aberration. It’s always existed. And it exists within the tales of your spiritual practice.”

But for the left-wing and queer Norse enthusiasts, there is a stirring panic whenever white supremacy hits the news. A panic that, just because they love Norse myth, they could be considered white supremacists. “After the Capitol, there was just such a sadness of, ‘Here we go again,’” Casey says. “If you say, ‘I love Vikings’, you always have that implicit asterisk of, ‘I’m not a white supremacist.’”

Shauna Staveley, a 36-year-old from New England, feels the panic that Casey describes. Norse paganism is usually practised within a group. Shauna, a practising Norse Pagan, has seen so many communities infiltrated by white supremacists, that she’s stayed away from any gatherings. She is a Norse Pagan but practises alone. “There’s a huge struggle there that I’ve seen with groups I’m in,” she says. “I want to find my community, but can I trust it to be safe?”

Casey, Amy, Nate, and Shauna all try to present different interpretations of Norse myth, and combat misinformation where they find it. For their work, they get abusive comments and emails from white supremacists. Amy received an email telling her to drown in a bog – an insult stemming from the misconception that Vikings drowned queer people. Research shows that they didn’t. In this way, much of the white supremacist rhetoric mischaracterises Norse history.

Even when presented with fact and science, there are some who are too far gone to reach.“They’re so embedded in their beliefs that it’s like it’s talking to a brick wall,” Shauna says.

Nate has their theories as to why it’s so hard to change some people’s minds. “I think that there is, for some people, an attraction in trying to identify with this kind of superiority,” they say.

For some Norse Pagans, their sense of belonging hinges on the exclusion of others. They strive to protect the ideals of a ‘white’ America and Europe and use Viking myths and legends to justify their claim to an all-white land – where they believe only they belong. “I think it is really rooted in patriarchal, toxic-masculinity type-thinking because it’s based on this idea of superiority,” Nate says. “I think it preys on people’s need to belong and find community and comfort. Because of patriarchal conditioning, they’re not taught that there are other ways to exist – other than to be this straight, white, Aryan. In order to achieve that, they have to then exclude all others, violently.”

This progressive group of Norse Pagans and enthusiasts has seen a world that persecutes them for being who they are. They have sought religion and philosophy where they see themselves reflected, which brings them solace and comfort. They have found joy and wonder in an ancient world and a diverse and inclusive pantheon of Gods. They found belonging. And even when confronted with white supremacy, homophobia, and hate, they’ll fight valiantly to protect this world.

Linkedin
RELATED ARTICLES
OTHER ARTICLES
Shifting the focus from the cost of living crisis to tackling obesity while many starve or freeze is farcical and pointless, writes Fatzine founder Gina Tonic.
To mark the anniversary of the mass trespass of Kinder Scout, a group of hikers came together with the intent of creating a new, fully inclusive culture for rural spaces.
Following the success of her debut novel, the Tottenham native is restating her commitment to the place that made her.
Photographer Phyllis Christopher recalls capturing sex and protest at a time when the city had become a haven for the queer community.
After news broke last week around an expected reversal of the 1973 landmark law that made abortion legal in the US, protestors gathered in the UK in support of American women.
Satirical culture in the UK routinely protects the powerful and punches down. It’s time people stopped laughing along, writes Elia Cugini.