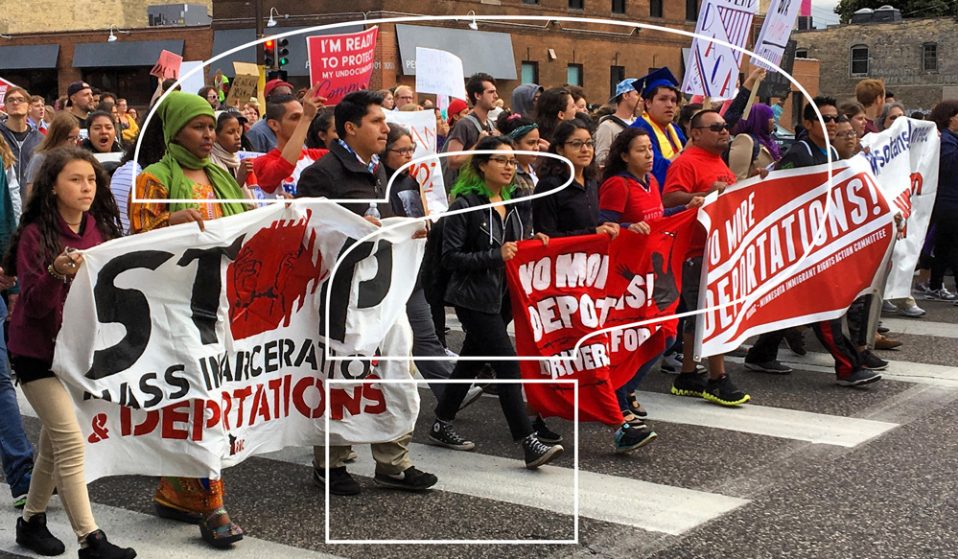 Earlier this week, Swedish student Elin Ersson went viral for halting the deportation of a 52-year-old Afghani man. But this was a tiny part of a much bigger, and more sinister, story.

Earlier this week, Swedish student Elin Ersson went viral for halting the deportation of a 52-year-old Afghani man. But this was a tiny part of a much bigger, and more sinister, story.

It took just 15 minutes for 21-year-old student Elin Ersson to be catapulted into the international consciousness. She did so by refusing to sit down on a flight from Gothenburg to Istanbul until the pilot agreed to refuse to fly a 52-year-old Afghani man who was being deported to – as she claims – certain death. This protest was live streamed on her Facebook page, and has since been viewed millions of times.

It was 15 minutes that saw the practice of deportations hit the headlines once again. Only two months ago, the Windrush scandal dominated the media, with wall to wall headlines highlighting the hypocrisy and inhumanity of the British immigration system. This was followed by the Trump administration’s forced separation of parents and children in June.

Across the world, a light is finally being shone on forced deportations. It’s a practice that has been hidden away from public view, with many taking place in the dead of night from military bases. They’ve been hidden so well, that it’s often difficult to get your head around what exactly is going on. Here, we share a helpful guide explaining everything you need to know about deportations; from why they’re so fucked up, to what you can do about it.

Deportation from Gothenburg to Afghanistan

WHAT EXACTLY IS HAPPENING?

In order to be a legal resident in the United Kingdom, you must either be a citizen or have temporary or permanent leave to remain.

WHY IS IT IMPORTANT?

The Windrush scandal exposed the injustice and incompetence at the heart of the UK’s immigration policy. Earlier this month, the cross-party ‘Home Affairs Select Committee’ released a damning report in which they stated that the Home Office has “set immigrants up to fail.”

This is important because, for many of those seeking refuge in the UK, the decision to ‘remove’ them back to their country is often a death sentence. LGBTQ people are regularly deported to countries where they face persecution, violence and death because of their sexuality. Last year, then Home Secretary Amber Rudd defied three high court orders to deport Samim Bigzad to Afghanistan – a country he had fled in 2015 after the Taliban threatened to behead him.

The deportations themselves are dangerous. Physical assaults and heavy-handed restraining techniques are commonplace, with people being shackled to security guards or their seats for hours on end. In 2010, during an attempted deportation, 46-year-old Jimmy Mubenga was killed whilst being restrained by private security guards from firm G4S. He is reported to have cried out “they’re killing me” repeatedly before falling silent.

WHEN DID IT ALL START?

Immigration enforcement and deportations are not necessarily a new phenomenon. Charter flights began under the Blair Government, with some of the first deporting Roma people to the Czech Republic, a place where Romani women were regularly sterilised from the mid ’70s until the early ’90s.

It was, however, the weaponisation of immigration by the conservatives in the 2010 general election, and the subsequent implementation of the ‘hostile environment’ policy by Theresa May during her tenure as Home Secretary, that has seen inhumanity become a defining part of the system.

In July 2017, the Supreme Court even ruled that May’s “deport first, appeal later” policy was unlawful, but that hasn’t stopped things from getting worse. Cuts to legal aid have seen the ability of those facing deportation – who need to navigate the labrinthine paperwork tunnels of the home office – doing so with no access to legal representation. Consecutive immigration acts have put the onus on frontline health workers, landlords and homeless charities to act as border agents, legally obligated to refuse free healthcare, shelter and services to those without confirmed residency status. Raids on migrant communities have increased, with a man being chased to his death by enforcement officers in Newport last month. Earlier this week, businesses in London’s Chinatown closed as the community demonstrated the “aggressive targeting” of the area by enforcement agents.

Ultimately, it is the Home Secretary, Sajid Javid, who is responsible for setting Home Office policy around immigration. Caroline Nokes, Immigration Minister, oversees Immigration Enforcement and the operational delivery of deportations. Home Office employees, those in the police and the prison service are also all complicit in deportations.

Beyond the arms of the state, deportations are big business for private firms. According to Mitie, a private security firm involved in deportations, the contract for security enforcement is worth £52million a year.

The Home Office purchases tickets from commercial airlines like British Airways to facilitate deportations. Airlines like Titan Airways see their aircraft chartered by the Home Office on different ‘routes’, in an industry that was worth £10.3 million in 2010 according to Frances Webber in her book Borderline Justice.

WHERE CAN I FIND OUT MORE?

The Detained Voices collective run a website which gives a platform to those facing deportation or in indefinite detention. SOAS Detainee Support and These Walls Must Fall support those in detention, whilst campaigning for the closure of centres. Organisations like Right to Remain provide a toolkit to unpick the behemothic immigration system, and supports those trying to make their way through it.

The Anti-Raids Network provides information on how you can help resist an immigration raid. Groups like End Deportations, Lesbians and Gays Support the Migrants and Sisters Uncut continue to organise demonstrations and actions against deportations.

Linkedin
RELATED ARTICLES
OTHER ARTICLES
In his 2008 series, the photographer pictured himself as Angela Davis, Martin Luther King Jr., Malcolm X, and other prominent figures.
The two-day long event returned to London this year, showcasing a spectacular parade, steel bands and Caribbean food.
Ahead of the release of their first collaborative album, the producer and rapper talk psychedelics and the state of UK hip hop.
By turning a real-life crisis into daytime television fodder, TV bosses have once again shown themselves to be completely out of touch with audiences.
As the Scottish government announces a rent freeze, an activist with Living Rent who fought and won shares how they did it, and what must come next.
With skyrocketing rents, packed out viewings, bidding wars and more, renting in London has never been harder.