News & Politics / Activism / What would a joyful mental health space look like? 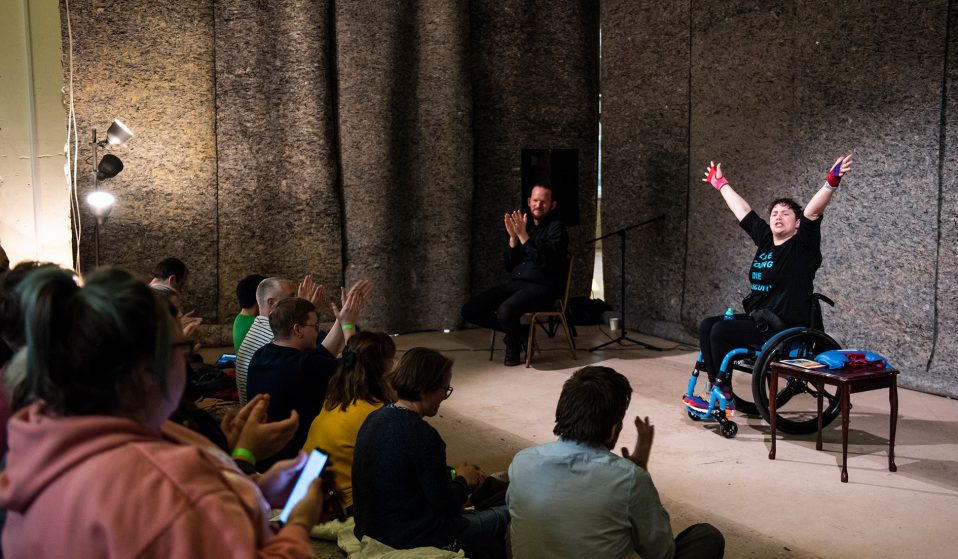 Madlove is an ongoing community project, redesigning creative spaces where people can ‘go mad in a positive way’. Writer Emily Reynolds visits their latest site in St. Helens to discover why this fresh approach is so important.

Walk into the Heart of Glass Madlove takeover in St. Helens and you’d never know you were in an old Argos. While the retailer is hardly known for soothing aesthetics, this store goes one further – gutted and abandoned, it had been left empty since the company vacated it months prior.

So it’s all the more remarkable how instantly calming, warm and welcoming the space feels now it’s been made over. It’s part of artist and activist James Leadbitter’s Madlove series, an ongoing project that imagines what spaces for mental health could be like. Earlier this year, he worked with a group of young people with mental health problems living in Great Ormond Street Hospital, asking them to dream up a space that would feel more joyful and creative than the one they occupied.

It’s not a coincidence that the first thing you see when you walk through the Heart of Glass door is a colourful chalkboard ‘safer spaces guide’, encouraging visitors to respect physical and emotional boundaries. Just past that is a crèche, decorated with scores of upside down umbrellas, and two seated areas: one, a cafe, where people sit and envisage what care would look like in an ideal world, and another, comprising of three long benches, designed to prompt conversation between strangers.

Further into the unit, things get even more cosy: theatre spaces decorated with vines and leaves, and a huge bell tent full of low lighting, rugs, blankets and sofas. You could spend hours here. 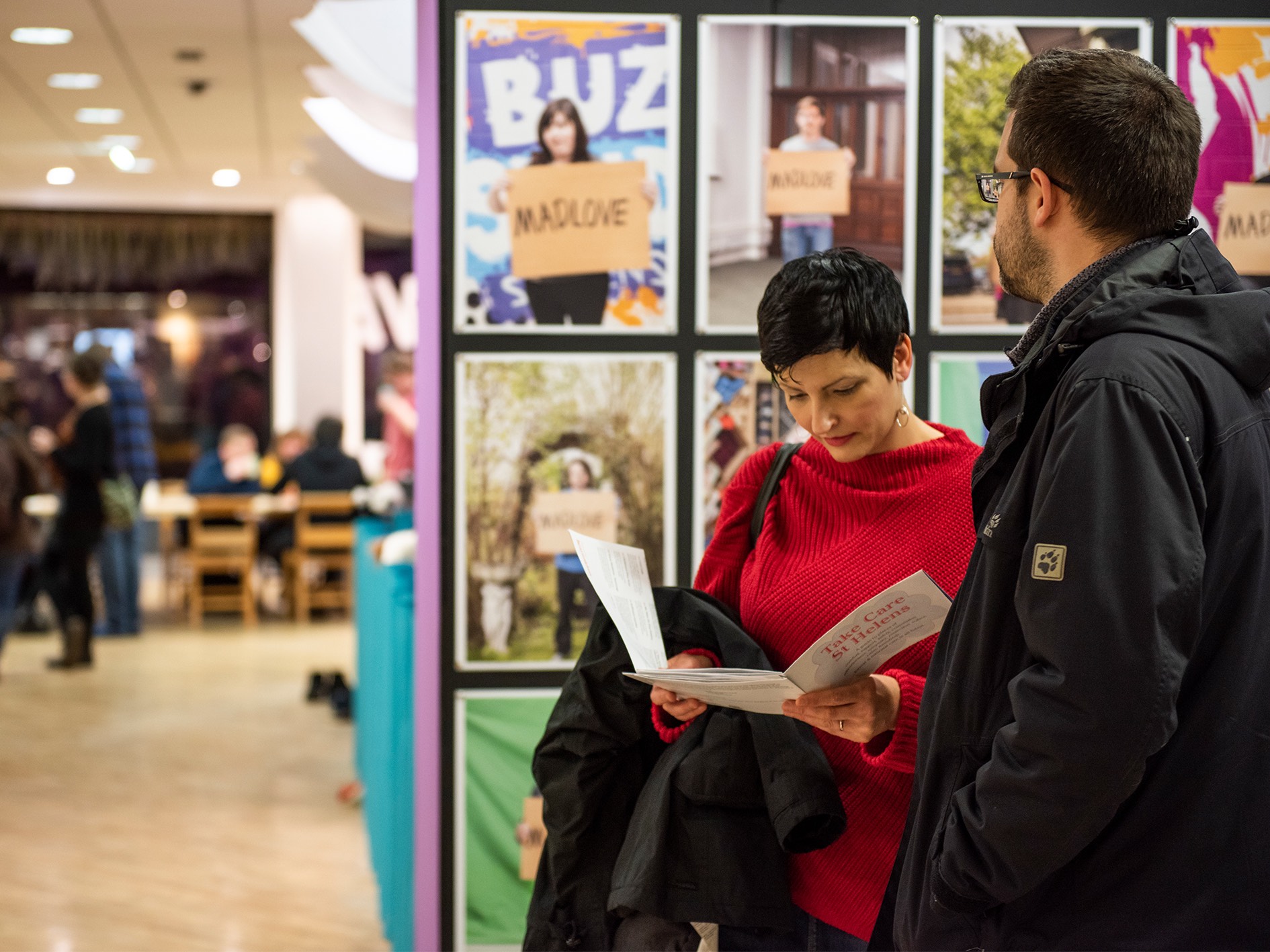 Outside the space, however, things are not so positive. In 2018, St. Helens made headlines after being dubbed the ‘suicide capital of the UK’, a pretty sensationalist way of describing the town’s problems with mental ill health and distress. Suicide rates have since fallen – but are still the fifth highest in the country. Leadbitter describes the “obvious problems” St. Helen’s has faced in recent years; this made it the perfect place to create such a space.

The causes of suicide are too complex to ever untangle: to even try would be a disservice to those who have lost their lives. But what we do know is that St. Helens itself has been a victim of a decade of austerity. Earlier this year, Labour councillor Anthony Burns said it was “no surprise” the town was experiencing so many suicides because of “what people are going through”.

“There is a lack of hope, high levels of unemployment… men who are struggling with the effects of austerity,” he said.

“We’ve been totally forgotten,” one resident, Gareth, puts it as we sit and drink tea together in the Madlove cafe. “Through the cuts and austerity… so much has been lost.” He points out several brick towers, chimneys from factories that once provided thousands of jobs. No longer: in 2018, St Helens saw a five per cent increase in the number of people claiming unemployment benefits, a figure that rose again in 2019. 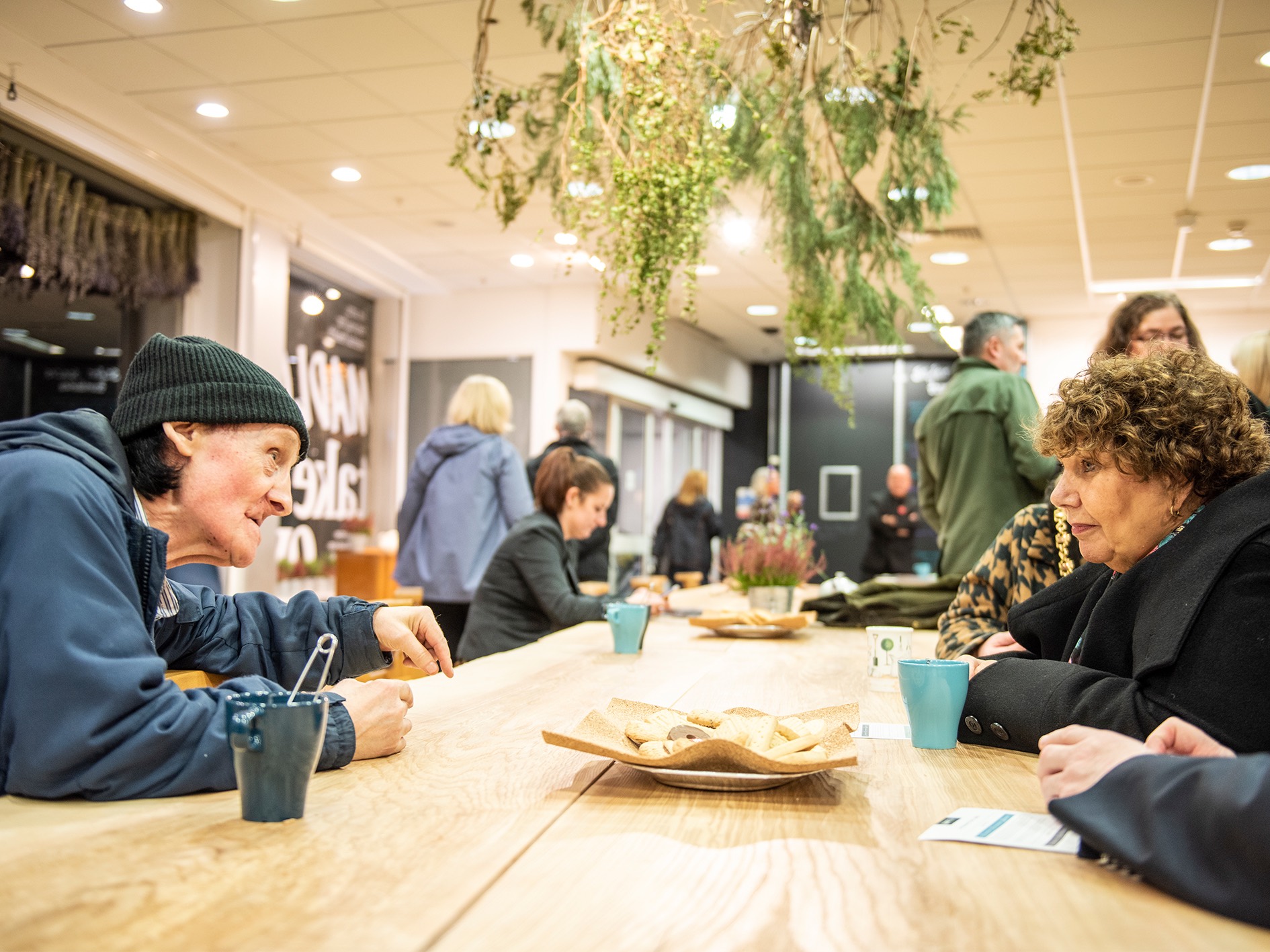 The economic downturn has led to shops closing and the city centre shrinking – visible from the window of the abandoned Argos unit alone are empty shop fronts where Marks & Spencer and Topshop used to be, as well as the shell of an old Woolworths that had never been reoccupied.

Mental health services in Merseyside have been struck by the same funding issues as the rest of the country, and local charities have also struggled to keep afloat: this year, the Liverpool Mental Health Consortium announced it was on the brink of closing after it lost the financial support it needed to keep going.

Interacting with Leadbitter’s project is both grounding and sad. The space itself is wonderful – there’s a real safety in knowing your feelings and experiences are going to be respected and understood no matter what they are.

But when you look outside, into the rain, at a town decimated by cuts and struggling to survive, a real poignancy emerges. In here, care is prioritised: not only that, but people’s personal expectations of and hopes for care are prioritised. Our individuality is not only respected but encouraged: mental healthcare is not seen as one size fits all, nor is it seen as something that should only be provided by a cold, faceless state. There’s space for community and for solitude. And none of this is held back by the financial insecurity that dogs so many people’s lives – everything is free. 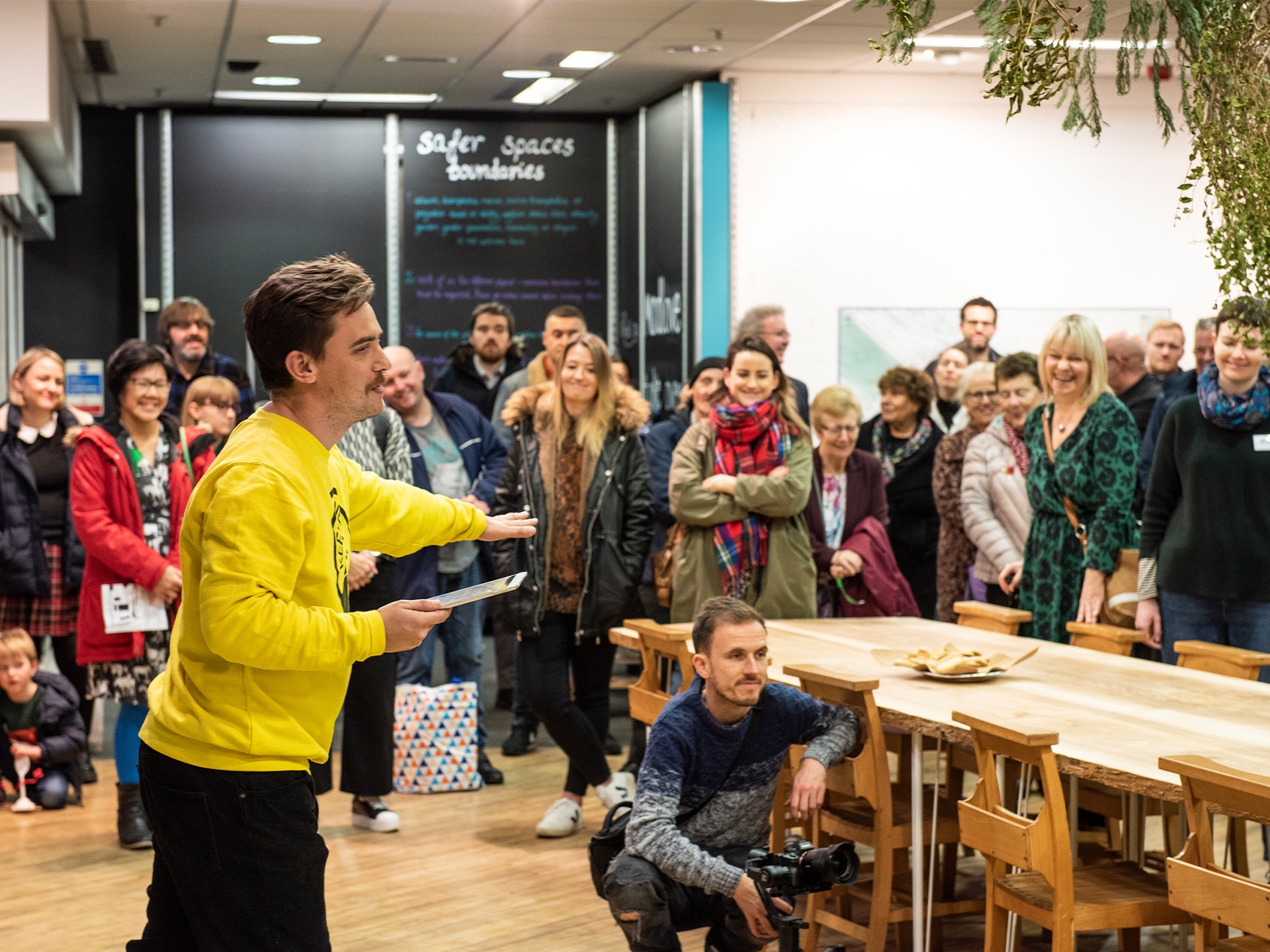 Response to the project has been “phenomenal”, Leadbitter says; up to 150 people have visited each day, and the team has had to employ extra hosts to deal with the demand.

But it’s also made him angry. The project has had plenty of interest from those in the art world, parents wanting to make use of the project’s play area, and casual passersby. But there has also been an incredibly high number of homeless people and “very distressed people”: a stark illustration of how those most in need of help are being so dramatically failed.

“People have been coming in because they need somewhere warm, they’re coming in states of distress because they have nobody to listen to them… there are no services, nowhere for them to go,” he says. Art can do amazing things, Leadbitter believes. “But artists should not be providing services where the state has failed.”

“I wish this was a full time thing,” Gareth said to me before he left. “But I’m just glad they’re using it for anything.”

Find out more about Madlove on their official website.

Linkedin
RELATED ARTICLES
OTHER ARTICLES
Photographer Becky Tyrell went down to the fading banger and stock raceway to meet a community desperate to keep it alive.
As she gears up for the release of her first book, the 24-year-old climate activist talks standing up to authority and building a more inclusive movement.
Photographer Sean Maung reflects on documenting a small town in Pennsylvania afflicted by high levels of unemployment, poverty, violence, crime, and addiction.
After blocking the Scottish government’s gender recognition reform bill, Westminster is now devising further changes to the law to make it harder for trans people to self-identify.
A new law change is enabling Britain’s donor-conceived children to know the truth about their origins – but campaigners say the fertility industry must do more to protect people.
A recent High Court ruling against the right to wild camp in Dartmoor National Park sparked the largest land protest in history – and campaigners say their fight is not over yet.