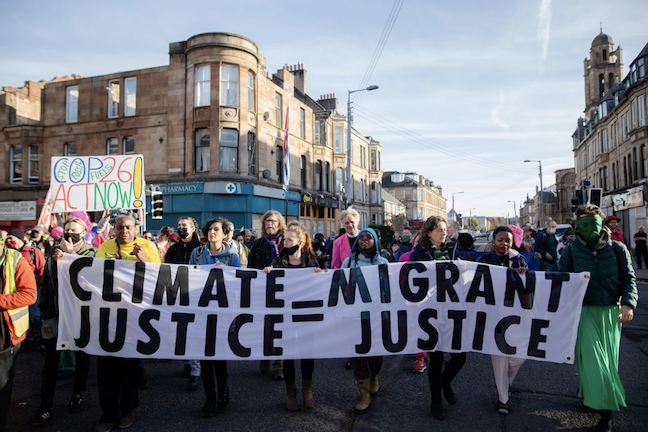 It is morally reprehensible to have a conversation about climate justice without acknowledging the issues around race and migration, writes Yvonne Blake, the co-founder of MORE.

It is morally reprehensible to have a conversation about climate justice without acknowledging the issues around race and migration, writes Yvonne Blake, the co-founder of MORE.

I don’t cry often. That changed however, when I visited several young Black mothers in the Glasgow Home Office Mother and Baby unit, which houses expectant mothers and babies seeking refuge in Glasgow. This is the only one of its kind in Scotland and living conditions are horrendous – tiny rooms with inadequate ventilation.

These mothers’ crimes? Seeking refuge. For that, they are forced to welcome their babies to the world in a room akin to prison conditions. This accommodation was signed off by social services, Glasgow City Council and medical professionals. Seeing this message being sent to a Black mother and her new child was devastating.

This month leaders, delegates and activists from across the world have gathered in Glasgow for the COP26 climate summit to prevent further calamity resulting from the climate crisis. It may, on first glance, have very little to do with the Glasgow Home Office Mother and Baby unit – but that could not be further from the truth.

It is impossible to achieve climate justice without migrant and racial justice. The climate crisis is predicated on inequality and unequal access of resources for Indigenous Black, and brown communities – coupled with the extraction, depletion and monetisation of our people, culture, lands and future.

The climate crisis forces people to migrate as sea levels rise and drought intensifies. Entire communities are displaced, leaving women and children vulnerable to gender-based violence, sexual exploitation and human trafficking. One invisible community in this crisis is young boys and men who are often abducted and recruited as toy soldiers.

These injustices are predicated on the systemic exploitation of communities across the Global South. Data suggests that 30 million people were displaced from their homes in 2020 due to floods, with projections from the World Bank suggesting displaced communities continue to grow.

This year has seen huge mobilisations on the streets of Glasgow in support of the rights of those housed in the city. In May, hundreds came out to block the detention of two local residents in the city’s Pollokshields area. As a city, Glasgow has a rich history of radicalism and activism but we must interrogate the colonial legacy and the systems of oppression that demonise, criminalise and ultimately fail to protect refugees and asylum seeking communities in Glasgow and internationally.

Glasgow maintains a duplicitous relation with race and equity. In the 18th century, Glasgow was the mecca of the slave trade. Its wealth, infrastructure and institutions were the spoils of the enslavement of Africans and Asian chattel slavery. Glaswegians owned enslaved people in the Caribbean while playing a significant role in the abolition movement. 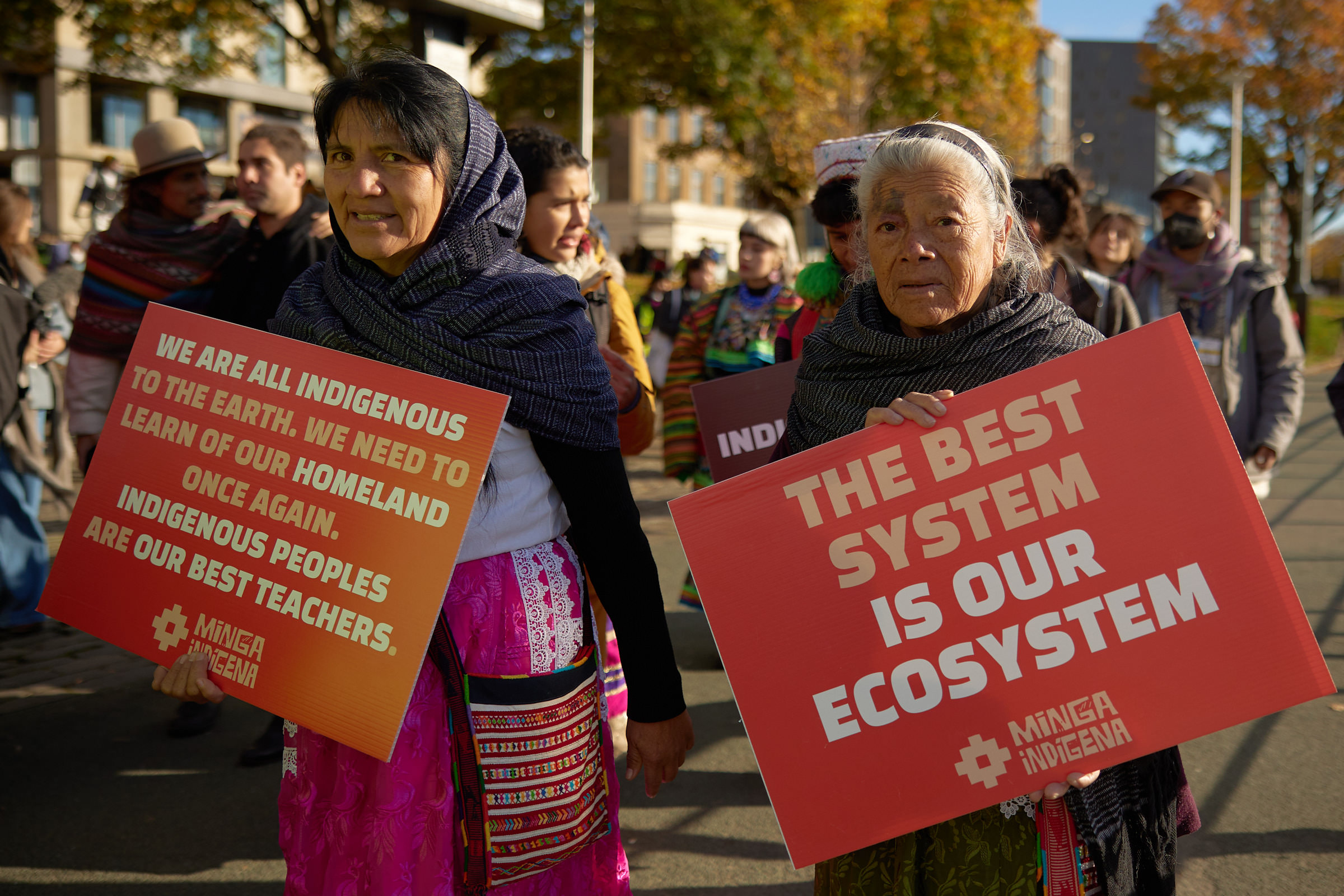 Similar themes are woven through today’s ‘immigration industrial complex’. Glasgow is the largest dispersal city for asylum seeking people. Our presence continues to serve the interest of NGOs and private companies. From landlords who bank huge sums of money by renting out miserable accommodation to asylum seeking communities to employment created in the “white charity” model – the extraction continues.

People on the streets are welcoming, yet those in positions of power in charities are more interested in monetisation of pain as opposed to listening to us. This is unsurprising given the lack of diversity across the sector. Migrant communities arguably hit the hardest are often excluded from conversations and organising.

As a Black woman with lived asylum and immigration experience, my perspective is often ignored, while Europeans are treated as the experts. In 2018, I co-founded MORE, a grassroots migrant led organisation founded as an alternative to the charity and paternalistic model which relegates us to service users and deliberately creates barriers to ensure that we remain perpetual service users. We campaign for asylum seeking people’s access to employment, education, decent housing and dignity.

We run educational workshops and campaign around many issues related to the treatment of migrants, run a cycle club to ensure our community has access to the outdoors and deliver shopping and a stipend to shielding families.

It is morally reprehensible to have a conversation about climate justice without acknowledging the issues around race and migration. The climate crisis is an inevitable consequence of resource extraction from the Global South to meet international demand for fossil fuels. We can’t separate climate change from conversations relating to the racial wealth gap, or the imposition of crippling taxes by wealthy nations for independence. These barriers, just like failing to curb carbon emissions, all involve displacing people or limiting their access to basic infrastructure, employment, housing and education.

We hear the Global North’s deafening silence on Global South reparations demands. Individuals of former colonies face insurmountable obstacles due to inequity and power imbalances in the international monetary policies which benefit the Global North, while continuing to pillage and rape the Global South. The UK Home Office’s migration and asylum policies strips Black and brown people of our identity and restrict our access to employment and education.

We are not expecting changes from COP negotiations as Migrant right activists and communities. We are reframing the narrative, ensuring indigenous and migrant perspectives are at the forefront of conversations about climate change throughout the People’s Summit. On Saturday at the Global Day of Action, I marched alongside people from Uganda, Brazil and Indigenous people from Colombia to share the message that climate justice is racial justice.

A radical shift is required in the climate discussion which must begin at the top. Climate justice movements need to collaborate with migrant organisations, hire more diverse candidates and listen to their voices. We can only achieve true climate justice when the conversations and solutions are reframed and viewed through a Racial Justice and human rights lens. Solutions must be embedded in reparative justice and sustainability of the Global South.

The world is watching: it’s our chance to help people in power understand that the climate crisis has a human cost.

To support individuals affected by the hostile environment donate to the Crowdfunder organised by Yvonne.

Linkedin
RELATED ARTICLES
OTHER ARTICLES
The government’s failure to take long Covid seriously has led to the formation of a group campaigning for the thousands of forgotten victims of the illness.
The situation in Afghanistan remains dire, with many groups facing persecution at the hands of the Taliban.
Over the weekend, London locals came together to resist a pre-planned police raid targeting delivery drivers.
While protests over abortion rights rage in the US, access to abortion services is still almost nonexistent in parts of the UK.
Following the success of her debut novel, the Tottenham native is restating her commitment to the place that made her.
Following the release of his latest album God Don’t Make Mistakes, the rapper talks horror villains, police brutality and being unafraid to show his vulnerable side.