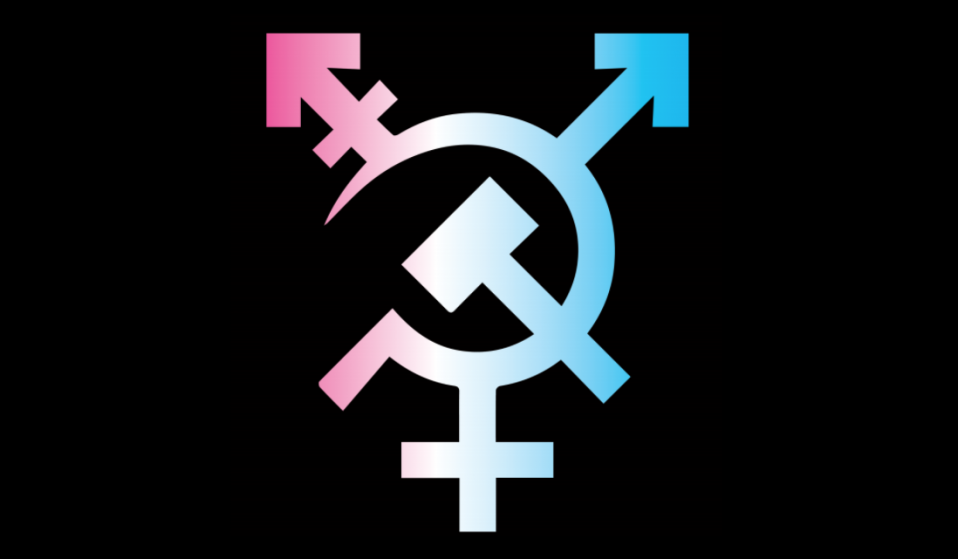 Trans rights are at a crisis point. In the last year alone, we have seen threats to the healthcare of trans minors in the UK, the introduction of a discriminatory bill in Tennessee that aims to prevent transgender people from using restrooms aligning with their gender identity, and the repeal of legal recognition for trans and intersex people in Hungary.

Amid this, Transgender Marxism (Pluto Press) responds to the current global crises facing trans lives and rights with a radical collection of ‘transmarxist’ essays that analyse trans survival under capitalism. Featuring writing by a mixture of trans academics, activists, and survivors, the collection charts the relationship between transness and class struggle, including how trans people survive hostile workplaces, state violence, inaccessible healthcare, and the nuclear family.

Huck spoke to the book’s editors, Jules Joanne Gleeson and Elle O’Rourke, about the role of trans people in revolutionary organising, the value of publishing trans theory in a mass-marketed book, and the importance of trans Marxism in challenging the rise of the far-right.

Gleeson: The simple answer is that trans people are often exposed to the worst of the world. Many of us face down long-term unemployment, and the industries we are well known for working within are also notoriously resistant to labour organising. But it’s not quite as simple as ‘trans people are often impoverished proles and therefore against class society’ (true as that is!). Beyond the typical drain of exploitation, trans people have a specific experience of capitalism.

Our experiences of transition often force us to confront the ways that much of what gets presented to us as ‘natural’ and inevitable are actually flexible and can shift more than people realise. We’re only a century or so into informed human investigations into the endocrine system (i.e. the body’s constant regulation of itself with hormones). Trans people today enjoy the fruits of that discovery in ways that threaten a wider expected order of sexed bodies. It’s an order that is now having to justify itself, at our expense.

O’Rourke: It would be facile, and wrong, to attempt to construct some revolutionary potential out of transition as such. But transition is a deeply personal and intimate practice, one that often requires a significant rupture with much that came before, because it touches nearly every single aspect of social life. You have to come towards a new orientation with yourself, your family, your doctors, your school, your employers, and with the state.

Even those [trans people] whose class background affords them an easier time than most can find a life plan quickly thrown off course. This can often bring with it a renewed and distinct understanding of social exploitation, a keener appreciation for the politics of bodily autonomy, and a desire to commune with those who also wish to change it. As Kate Doyle Griffiths put it: “The left is not only unusually ‘tolerant’ of queers and trans people: it also consists of us.”

Do you think transness has historically been seen as incompatible with Marxism?

Gleeson: That viewpoint still exists today, but I find it very boring. A lot of what we wanted to achieve with this book was helping our movements shift out of contrasting ‘material conditions’ and ‘identity politics’. There’s already a lot of Marxist thinking helping us get out of that dead-end: from the last few years, Asad Haider’s Mistaken Identity and Ashley Bohrer’s Marxism & Intersectionality spring to mind. Our collection shows how this same point holds for trans people: whatever we identify as is forged by class society, while often leading us into struggles that are as much about resisting exploitation as anything else.

O’Rourke: The relationship between Marxism and trans issues has often been not so much an ‘unhappy marriage’ but a yawning gulf of indifference. But arguments that wish to cast Marxism as fundamentally incompatible with certain ‘social issues’ (gender, race, sexuality, anti-imperialism and the struggle for decolonisation) would have to dissolve an apparent contradiction: that Marxism is, by far, the most well-travelled social theory of the 20th century, bar none.

Marx has been read by people of all social positions, circumstances, national origins and contexts over the past two hundred years as generations of radicals have, time and again, turned to Marxism and found not just a means of understanding their conditions, but – with a certain amount of creative adaptation – a means to change them. If others see an indissoluble incompatibility, so much worse for them.

You write that global far-right regimes such as United Russia, Hungary’s Fidesz, and Brazil’s Social Liberal Party have used transness as a symbol of cultural decline. Is the fight for transgender liberation an international one?

O’Rourke: Through and through. And it’s one forged not just through affectionate sentiments of fellow feeling, but real networks of affinity, intimacy and solidarity. It’s common for trans people to have friends, lovers and comrades all around that world, and at one point or another for us to mobilise to help them access medication, keep them in their homes or find them a place of safety.

Trans women, in particular, are often mobilised as figures of cultural decline for the far-right because they serve as this ideal symptom of social change more broadly. The idea that gender is being challenged in how it is lived, embodied, and experienced is a real source of political anxiety about the breakdown of ‘traditional’ (real or imagined) thresholds of exploitation. The impression that these thresholds are increasingly difficult to verify, or are being directly challenged, or are not being enforced hard enough, have resulted in a call to arms for their violent re-imposition.

Gleeson: It’s important to remember that trans people aren’t only a ‘folk devil’ used by the right as a scapegoat for national decline. We’re also heavily involved in the efforts to reverse the victories of these movements, worldwide. Virginia Guitzel’s essay ‘Notes from Brazil’ in Transgender Marxism provides an overview both of the offensive against trans people instigated by Jair Bolsanaro and the ongoing struggle to defeat his agenda.

Why do you think it’s important to publish transgender theory in a mass-marketed book?

Gleeson: Usually, trans thinking appears in ephemeral forms: social media statuses, zines, conversations in social centres or movement meeting, and other spaces that are often limited in audience (for safety as much as anything else). These mediums are prone to dissolving across time: sometimes they are even designed to. We don’t expect this to change, but with Transgender Marxism, we aimed to provide a more lasting and accessible testament to the theoretical breakthrough trans people are achieving. The collection makes these insights available to a mass audience for the first time and hopefully will give trans revolutionaries something to draw from in years to come.

O’Rourke: The fact that we were able to publish this book at all reflects the social impact of the increasingly more confident and self-assertive trans-feminist politics that has developed in recent years. No longer are trans issues marginalised to the hackneyed biography, the lurid talk-show spectacle, the small BBS board on hidden corners of the internet.

Trans people are not just addressing a cis-gender audience who presumably know nothing about trans people, who have never met a transgender person, or do not know that they have ever met a trans person. We have so much more to say and a broader constituency who wants to hear it. We can have different conversations from the ones we’re used to being forced into having. So let’s have them, on our own terms.

You write about the UK’s Gender Identity Clinics (GICs) as spaces where access to hormone therapy is gatekept by usually cisgender practitioners. As of May 2021, Charing Cross GIC is only just seeing people referred in October 2017. Do you think healthcare access is a central fight for transgender liberation?

Gleeson: Fewer and fewer trans people find the medical treatment on offer timely or reliable. Even prior to Covid, Britain’s healthcare provision was in a state of obvious meltdown with inhumane waiting lists followed by shoddy treatment sticking strictly to outdated best practices. The clinic’s function has been to break our spirit and deny us dignity. Meanwhile, trans people from all kinds of backgrounds have been building up our own approaches, increasingly allowing us to circumvent the delays and indignities of state provision. Until we’ve rid ourselves of the clinic system, with all its systematic incompetence and routine pathologisation, trans people [will be forced to] come up with their own answers.

O’Rourke:  Let’s be blunt here: the relationship between you and your doctor is an inherently antagonistic one. Doctors can deny you the healthcare you need based on personal whim, ignorance, or socially validated prejudice. And when they exercise that power prejudicially it’s you – not them – that suffer the consequences.

This is not a fight unique to trans people, and it’s often those who need care the most that suffer the system’s starkest injustices. But healthcare is a central demand of the fight for trans liberation because adequate care is so often the precondition for so many other things you want to do in life.

Bodily autonomy is a fundamental right that we should all have the opportunity to exercise as we so wish. Pathologising the small minority who undergo medical transition constrains the gender freedom and dignity of all.

Transgender Marxism discusses not only the violence trans people are frequently subject to, but also the various joys of transition, including transgender art, sex, and community. Was it important to you to include discussions of transgender life beyond suffering?

Gleeson: We don’t want to reduce ourselves to listing and illustrating the sufferings and trauma that transitioning brings down on our heads. While the conditions we face are often terrible, we have to keep in view the tremendous efforts we’ve taken – both personally and collectively – to overcome deprivation and everyday harms. Our survival is an ongoing process, and the ingenious ways we’ve navigated and challenged class societies are worth celebrating and learning from collectively.

O’Rourke: The pitiable transsexual – doomed to a fate which no one would choose to suffer of their own accord – is a genre unto itself. But no community that has suffered social oppression has defined itself through that suffering exclusively. Nor should they be expected to. There’s something deeply potent about finding joy, love, expression and community in defiance of a wider society that greets you with, at best, bemusement and, at worst, eliminationist intent. It’s a way of pushing back against a world that was fundamentally not made for you and carries with it a hope that it one day might be.

Transgender Marxism is out now on Pluto Press.

Linkedin
RELATED ARTICLES
OTHER ARTICLES
Tristan O’Neill’s shots of dancers caught in moments of reverie at the height of rave’s golden age are a testament to the UK’s legendary club culture.
Activists and campaigners are fighting back against new laws that would seriously undermine the ability to take industrial action, calling it an attack on fundamental workers' rights.
A new film from Berghaus traces the story of Adam Raja, who left behind a turbulent upbringing to discover the healing power of climbing.
Filmmaker Laura Poitras discusses her new documentary which traces the remarkable life of the artist-activist and the impact of her battle against the US opioid crisis.
A new exhibitions brings together the work of photographers who documented the deep unrest of these pivotal decades.
A recent High Court ruling against the right to wild camp in Dartmoor National Park sparked the largest land protest in history – and campaigners say their fight is not over yet.