News & Politics / Activism / How to save the world from financialisation 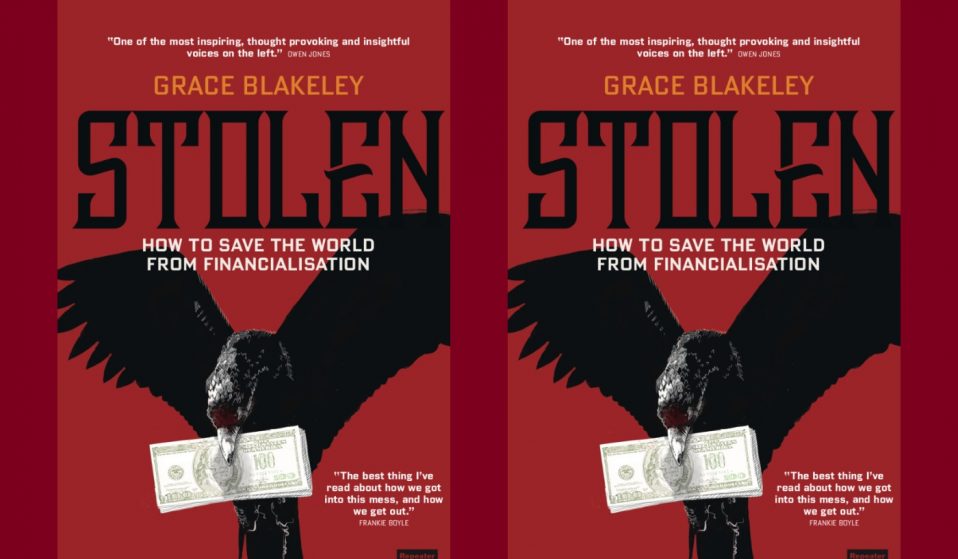 The journalist and economist talks us through her new book, and why it’s so important that we don’t repeat the mistakes of the past.

The journalist and economist talks us through her new book, and why it’s so important that we don’t repeat the mistakes of the past.

It’s raining in Brighton, and the city is buzzing with delegates, politicos, journalists and politicians. The Labour Party conference is in full swing, and The World Transformed festival just wrapping up. In the distance, Extinction Rebellion can be heard loudly demonstrating along the seafront.

Outside a Kemptown coffee house, Grace Blakeley is talking finance. The journalist and economist is in the city to promote her new book, Stolen: How to save the world from Financialisation – and to celebrate, she is currently talking me through the UK’s biggest political problems.

“We’ve had a decade of wage stagnation, low levels of investment and low productivity,” she explains, adding that Stolen is an exploration of “political origins of the current crisis in which we find ourselves.”

“The book basically looks at the rise of financialisation and finance-led growth. Between 1979 and 2008, we had this model for the economy that was based on the management of debt and wealth, landlordism, and on huge banks and asset management companies.”

Stolen takes us through the Thatcher years to the reign of New Labour, when – after a decade of a seemingly booming economy – the global banking system collapsed. What followed, she says, was a decade of cuts and attacks on the welfare state, which led to the largest decline in living standards in living memory.

“We’re living in this moment where the old model, which was based on rising debt and an unsustainable financial boom, has collapsed. We just haven’t come up with anything new.”

So how do we save the world from financialisation? How do we build an economy that works for all, rather than a small wealthy elite? Here, Grace talks us through how we can shape a future free from the financial shackles of the past.

Don’t be afraid of the word Capitalism

“We should talk about capitalism as much as we possibly can. And we should say what we mean when we talk about capitalism. It’s a system of private ownership which is supported by the state, where our resources are privately owned and exploited for profit. I think it’s very important that people understand that capitalism is not just a system of economic exploitation that takes place in your workplace – it’s a pervasive economic, political and social system that affects all parts of our lives. It is basically a system of social relations where a small number of people have all the power and get to tell everyone else what to do. The liberatory potential of socialism is actually saying: ‘we don’t need other people to make decisions on our behalf.’”

Know the difference between Neoliberalism and Capitalism – and critique both!

“There has been an issue in the last few years in that, instead of critiquing capitalism, we’ve basically just been critiquing neoliberalism. It’s very extractive form of free market capitalism that sees the state both shrink away from from socialising risk and providing services while also trying to actively and insert markets into places where they hadn’t been before. It’s a necessary critique, and it really started to galvanise people against what were deeply unfair and damaging austerity policies implemented by the Tories. But this critique has its limitations.

The problem isn’t just that the government isn’t spending enough money; the problem is that our government, our workplaces, and all our public services are run by this tiny cabal. It is a cabal that is using its power to oppress working people, to exploit and extract their wealth, and to shut them out of politics so that we can’t do anything about it. That’s the narrative that we should really have been going for from the start. It’s much more radical, and it requires a much bigger policy shift than what we’ve seen around austerity – but it’s the only way to win.”

Look outside of the mainstream

“We’re beginning to see the emergence of alternatives to the current status quo. You have an incredibly vibrant, exciting and expansive intellectual period for the left at the moment, where people are developing policy and building movements. You’ve got a much more active, expansive and generative movement on the left than we’ve had in decades.”

“There is always a way of communicating your ideas, no matter how complicated you think they are, that is accessible to the vast majority of people. People intuitively understand. People know, intimately, the impact that capitalism as an economic political social system has on their lives and their relationships. So it is very critical for us to be able to develop a critique of capitalism, and communicate that in a register that will resonate with people. One thing I’ve learned, for example, is not to talk about the economy: talk about your workplace, your public services, your bank, or your community. Choose something where people have a really active sense of how they work.”

“Human beings are capable of cooperation, and can work together to solve society’s problems. For a very long time, they’ve been deprived of the power to do so. The only way for us to solve any of the massive problems that we face today – whether that’s with climate change or the economy – is to give people back that power and let them solve it themselves. One of the biggest obstacles that the left faces today is a pervasive sense of disempowerment. I think that once people feel like they can make a difference, we don’t need to direct them. They will go and they will find things that empower them and inspire them.”

Stolen: How to save the world from financialisation is out now on Repeater Books.

Linkedin
RELATED ARTICLES
OTHER ARTICLES
Ahead of the release of their first collaborative album, the producer and rapper talk psychedelics and the state of UK hip hop.
The workforce is now gearing up for industrial action after receiving a measly pay rise, reports Ella Glover.
A 37-year-old woman shares how her abortion led her to become a clinic worker, and the abuse she’s received in that role.
Cindy Campbell recounts how her brother ushered in a new era of musical culture at a party she held in the Bronx in ‘70s.
Birdy Chu reflects on documenting the historic moment in which the territory was formally passed back from the UK to China.
Financial turmoil is pushing people who work in the sex industry into more dangerous and desperate situations as a means of survival.